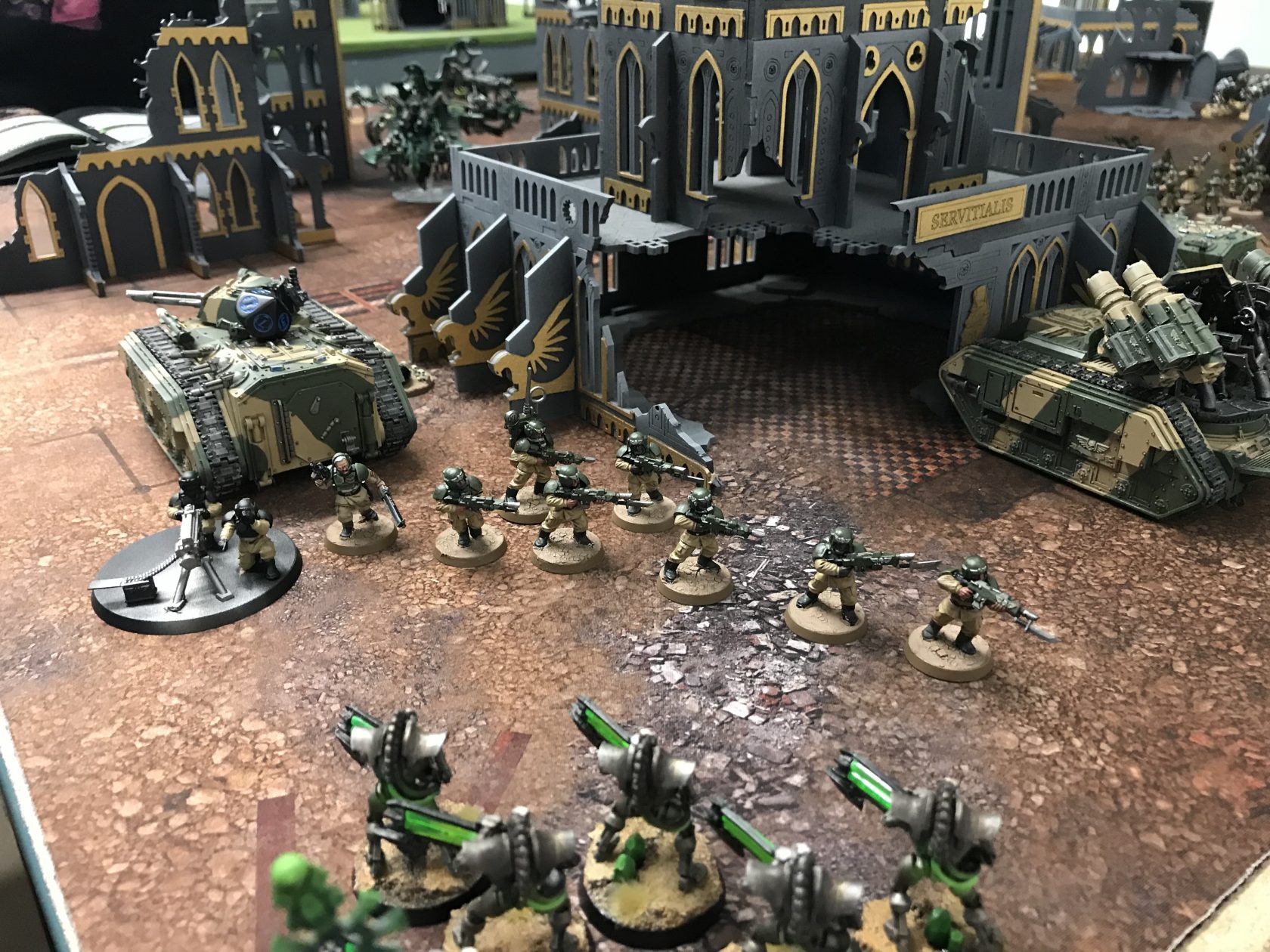 We are nearing the end now in the series, Astra Militarum Tips...

I am coming to the end of the series now, with this Astra Militarum Tips article. Future articles are likely to be about modelling and painting, rather than specifically about just starting out with the Astra Militarum. But please, stick around!


There is an Astra Militarum Glossary to accompany this series.

Command Points are precious for the Guard at the moment. We get 12 in a 2,000 point game and these days it is easy to burn 3 or 4 on Whiteshields, a Tank Ace and an extra Relic or two.

We are then left with 8 or so with the ability to generate at least 5 more throughout the game.

But a lot of our power comes from Stratagems at the moment so it is easy to burn through 5 or even more in a turn, after two turns I struggle to then have enough to operate effectively.

Command Point management is a game in itself at the moment for us Astra Militarum players. I am starting to think about spending almost none before the game to ensure I have access to our key power dealing Stratagems and survivor Stratagems during the whole game.

Some good old MathHammer will help you get the most from your orders. Is it better to use Take Aim or First Rank Fire Second Rank Fire? The former will let you re-roll ones to hit (or all misses if you’re Cadian) but the latter will double the number of shots you can fire with Lasguns. And how does that fit in with the Grenadiers Stratagem which lets everyone in a unit throw a Frag Grenade?

Don’t forget Forwards for the Emperor and Move, Move, Move to get your Guardsmen into the fight quickly or onto an objective. The latter can see your Guardsmen move a maximum of 24″ in a single turn. That’s impressive for those little legs.

Get Back in the Fight can be very handy. Perhaps you’ve gotten some Guardsmen into melee combat with an enemy tank to stop it from shooting for a turn. Use this order to pull back and open up with your guns on it or a nearby foe.

Finally, Fix Bayonets is circumstantial but a nice fluffy Order. If you’ve equipped a Sergeant with a Power Weapon it’ll allow you to fight with him (and his squad) immediately (in your turn) – perhaps taking off a vital wound or two from an enemy. 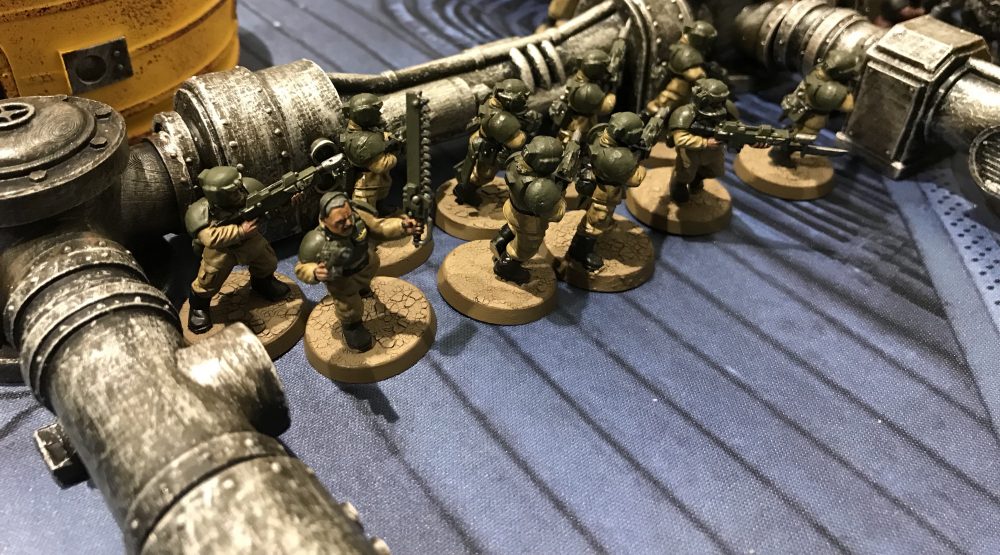 The Consolidate Squads Stratagem lets you take two regular infantry squads and merge them together. This is handy because now you only need one order to order 20 Guardsmen. Your Platoon Commander is now super effective.

But, beware! A big squad will be ripe for a Morale failure so ensure you can back up their Leadership or some other Morale boost. Such Fight to the Death Stratagem lets you take a Morale Check on a D3 rather than a D6.

By now you’re probably aware there are a few various regiments you can use for your Astra Militarum army;

However, some of the models for these regiments are no longer available from Games Workshop and therefore are rare on eBay. And because they are rare they are expensive.

Maybe Games Workshop will bring them back? Maybe they’ll be brought back in plastic? Who knows. But as of now, they’re only available second hand. The ones to watch out for are;

Cadian, Catachan and Militarum Tempestus are the only models currently available from Games Workshop.

You can also roll your own Custom Regiments thanks to the Greater Good book released during 8th Edition – which is still valid.

You’ll often outnumber your opponent. Sometimes three to one. That is of course if you use the Brigade or Battalion Detachments – you’ll end up with a lot of infantry. At least 60 with a Brigade. Cheap characters also mean your list of units to deploy can rise easily; Company Commanders, Commissars, Master of Ordnance, Officer of the Fleet, Platoon Commanders, Astropaths, etc.

Also, remember the Fight to the Death Stratagem that lets you take a Morale Check on a D3 rather than a D6. That can save you three Guardsmen and could be the difference between a squad being wiped out or not.

There are also some tasty Stratagems for Cadians in the War Zone Octarius Rising Tide book, that make infantry more durable.

This is an effective way of stopping enemies from charging your tanks. Set up your numerous Guardsmen around your tanks so the enemy cannot charge them.

Also, use Guardsmen to stop the enemy from Deep Striking in behind your lines. Fill the empty spaces with men.

This is known as screening.

Similar to padding out your Armoured units, you can use this padding plus a charge to delay potential threats.

If you have five Chaos Terminators en route to your Leman Russ then throw your Guardsmen into the Terminators. Surround them and force them to chew through your Guardsmen for a turn. This gives you some extra time to withdraw the Leman Russ and put something else in the way.

As Astra Militarum tips go, this is my favourite. Outnumbering the enemy with cheap infantry is what the Guard is all about for me and maximising this advantage is a lot of fun.

But beware, 9th Edition is very bloody and brutal. Giving an enemy unit something to chew through might mean the enemy can charge to that unit (gaining extra movement), Pile In 3″ and then kill the unit, finally, they can consolidate another 3″. So be warned! Do not enable the enemy to get closer quickly! 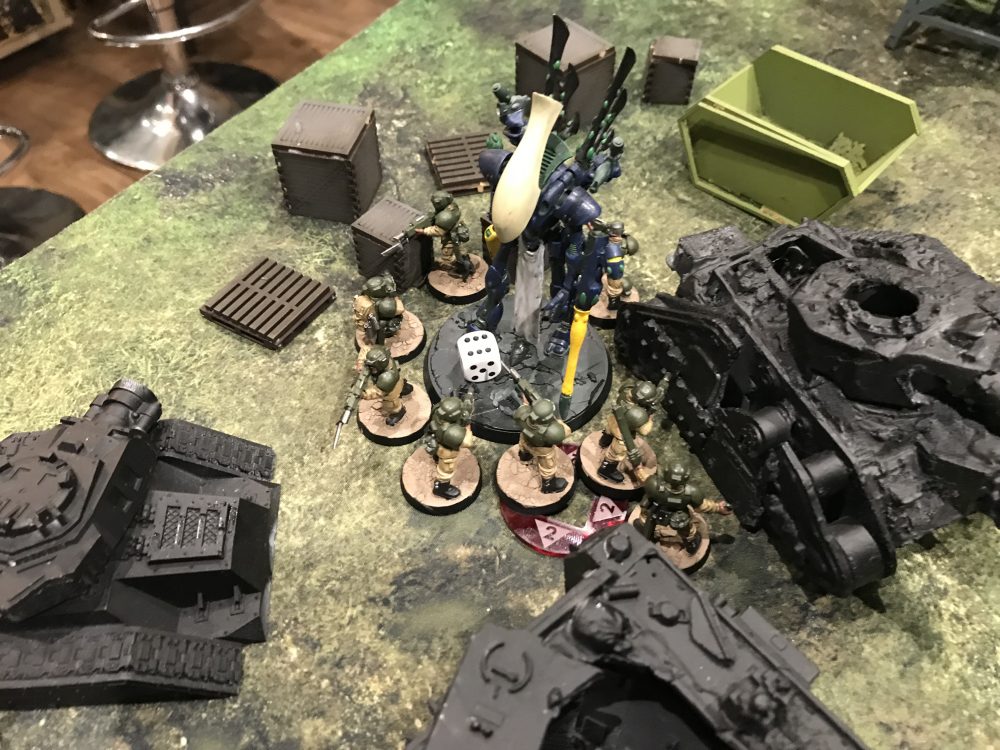 One Basilisk to kill all the enemy armour is not going to cut it. So take three.

You’re now going to ensure that you kill something with all that firepower. If you take one and it dies or misses the enemy goes unscathed. Or take two Basilisks and a Manticore. They are not the same unit but they both overlap in their roles on the battlefield.

If you take three you have room for failure. One can miss, one can fail to wound and the third might get the job done.

The same idea should be applied to other units in the Astra Militarum;

Heavy Weapons Teams comprise three models each with a heavy weapon. I prefer them, instead of taking the Heavy Weapon in an Infantry Squad.

Also, the Heavy Weapon Team can be ordered with a specific shooty based order. Re-roll ones to wound for example and it’ll take full advantage of that. While a regular squad might be ordered to Move, Move, Move – again wasting the heavy weapon. 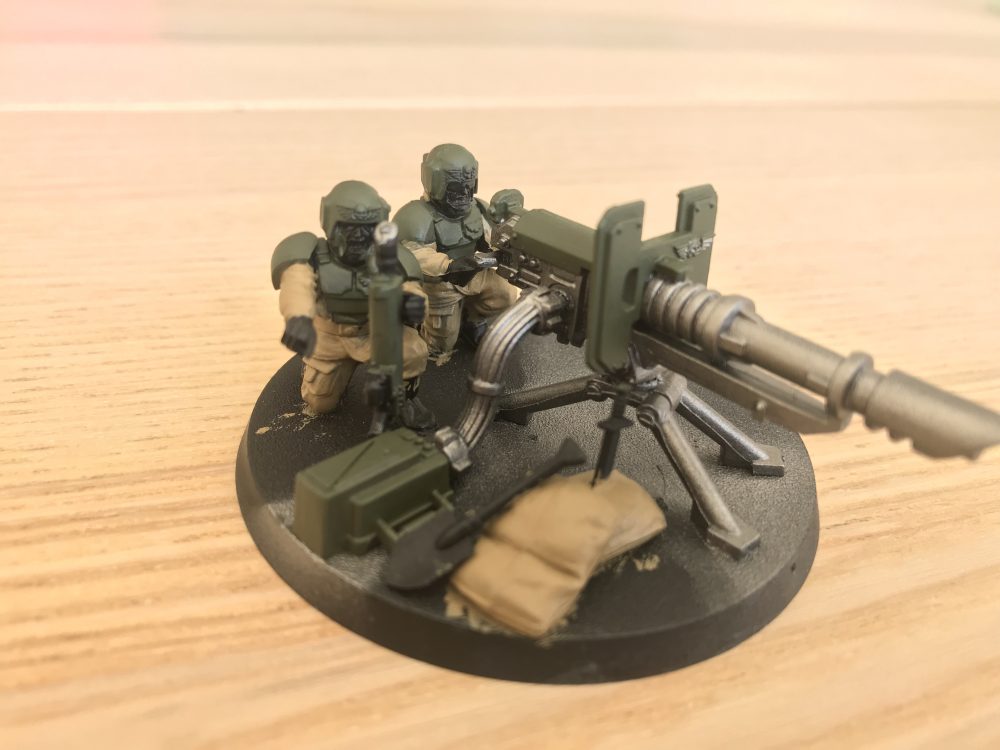 If it doesn’t need glue – don’t glue it!

Thanks to BigBear01 on Reddit for this. If it does not need glue to hold it on and its a gear or weapon option then consider not glueing it. The number of combinations the Astra Militarum can get is pretty good.

If you can magnetise even better. But if you can blu-tac or similar then it will save you a lot of money if you want everything to look correct. Because once you glue those Heavy Bolter Sponsons on a Leman Russ, they ain’t coming off!

Eventually, as you get used to playing and the playstyle you like – glue away.

Should I Vox-Cast or Not?

I tend to either add Vox to every unit or to none. Then it’s easier to plan movement. You know what you are dealing with, without having to check each and every unit.

I’ve mixed experience with the Psychic Phase with the Astra Militarum. Primaris Psykers can dish out the handy Smite. I’ve found this a good way of dealing that final wound to a model before the shooting starts.

Nightshroud and Psychic Barrier are the two powers I’ve used the most. They’re handy on Conscripts, really handle.

Psychic Maelstrom has the ability to do six Mortal Wounds – if you roll like a God. That’s more than Smite but it’s harder to cast, it requires a 7+. Its main advantage is that it can target anything within 18″. That’s very handy indeed! Another note here from West Rider from the comments;

Keep in mind that the restrictions on targeting Characters do not apply in the Psychic Phase. For the most part, this is irrelevant, because most Psychic Powers target the nearest Enemy Unit, but for those that don’t, like Psychic Maelstrom, it’s completely legit to use them to slap a few Mortal Wounds on a Character, intervening Units or not.

Never underestimate the Psychic Phase, you can get pretty creative with some of the powers and units we have at our disposal.

Practice makes perfect when it comes to playing more quickly. Playing quickly with the Astra Militarum can be very hard if you have 100 models to move and plan for.

But there are things you can do to help yourself;

This all saves time and reduces miscommunication.

You can try limiting each player’s turn to 30 or 15 minutes. That’ll force you to plan and think ahead.

As part of the Imperium of Mankind, we can bring a whole host of allies to help us fight on the battlefield. The easiest way to do this is via a Patrol Detachment which requires;

You can have up to two of any unit type – apart from Troops, of which you can have three. It gets you zero additional Command Points but does allow you to bring other factions easily.

This doesn’t always suit your requirements, however. Inquisition only have choices for Heavy Support, Elite and HQ – making a Patrol Detachment impossible. Instead, you can opt for a Vanguard Detachment which requires;

This is possible and gives you 1CP. You can fulfil this Detachment with an Inquisitor and three Acolytes.

So if you’re wanting to bring some friends; be that Custodians, Space Marines, Assassins or otherwise have a look at the detachments and see how you bring what you need.

Also, ensure you read the rules for the faction you want to bring. For example, a single Assassin can be brought as an Auxiliary Support Detachment. But you lose a CP. However, the Assassin rules state that three Assassins can be brought as a Vanguard Detachment without an HQ. You don’t get the single CP though for the Vanguard. But at least you don’t lose one.

Details of all my Astra Militarum Allies.

They are no Vanguard Veterans or Harlequins for sure. But there are some decent fighters in there. The Bullgryns are my favourite; with a Slabshield and a Bullgryn Power Maul.

The new Cadian box also has one of each Special Weapon too.

I sell them too at the Cadian Shock Store.

When you’re building a list try and think about these standardised units and how your list will counter them;

That gives you a good range of enemies to think about. You might be able to handle GEQ very well because of all the Lasguns you have. But how well can your list handle a Predator tank or even a Knight?

It’s hard to make a list that can take on everything. Often you can disregard certain types, such as KEQ if you know your opponent doesn’t own a Knight for example.

There are a lot of little things you can do the maximise force’s effectiveness in battle. There are many more too, check out my Astra Militarum Tactics category for more info, tactics and Astra Militarum tips.

If you want something else covered in this Astra Militarum 8th Edition Getting Started series, have a question or just want to say hello then please do. You can do so via the comments below, Facebook, Twitter, Reddit or email me at trooper@ the domain of this blog.