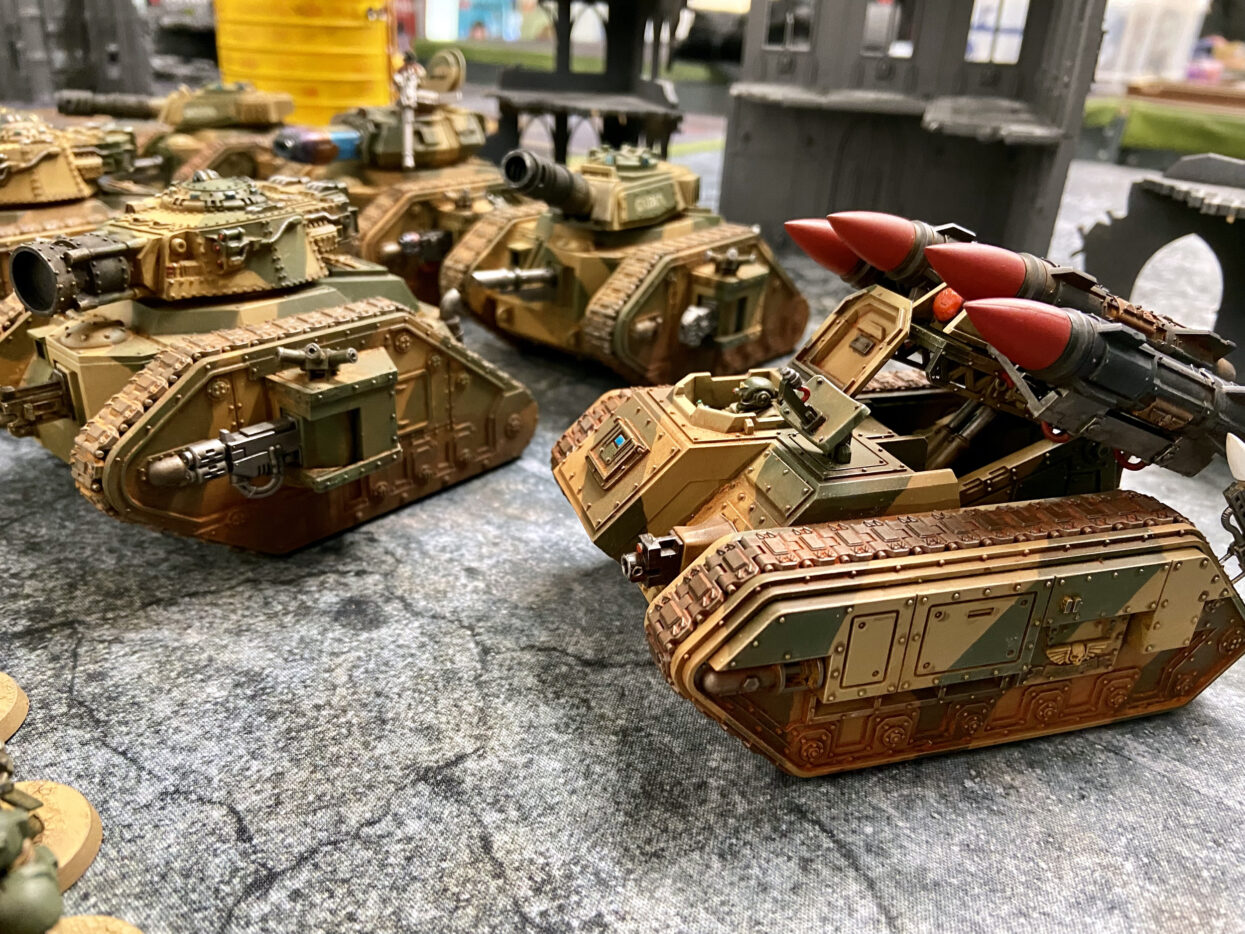 With 9th Editon now in full swing and no Codex in sight, it is time for an Astra Militarum Tactics Reset...

With a New Year’s Resolution of mine being;

Be more positive about playing Guard

I thought it was a good idea to try and do something about it in terms of gameplay and revisit some Astra Militarum Tactics- rather than just be more positive through sheer mind power.

With that in mind, I’ve come up with five things for me to think about in my games for 2022 that will hopefully help my Guard perform better. At least until we get a Codex, as that should change everything for the good.

I wanted to focus on aspects of the game I can control, rather than crazy combinations of units that might get ruined on turn one by the actions of my enemy.

I feel like the Astra Militarum is in a really tough position overall without a Codex. We are lacking the brutality, survivability and reliability of 9th Edition;

With those three issues in mind, here are my thoughts so far on trying to stay in the game for as long as possible and therefore try and remain positive. 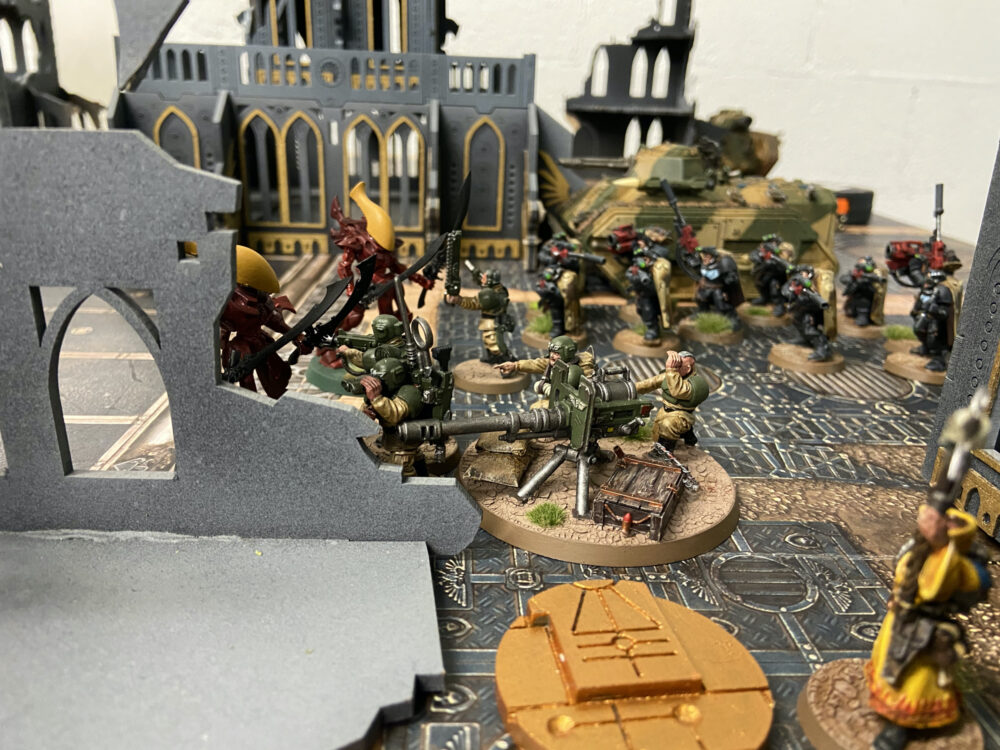 Some eye candy for you!

The Astra Militarum are in between a rock and a hard place when it comes to Command Points.

It’s easy to burn through a few before the game to gain a Tank Ace and an additional Relic or two. We have new toys now too for Cadians, so it’s easy to burn another one or two CP on Whiteshields. Doing this then makes it very hard to justify spending anymore, e.g on a different Detachment with a different Regimental Doctrine.

All of this would be fine. Other forces do this a lot, spending significant CP before the game to further buff up their characters and units.

But we then need those CP to stand a chance in the game. We are limited to gaining a maximum of 2CP per turn too, so there is no answer there. CP farming is dead.

My only conclusion is to either;

I’ll be trying one of these approaches soon, so I don’t have any solid feedback on this yet.

What is your approach?

More on this subject of CPs later in this article. 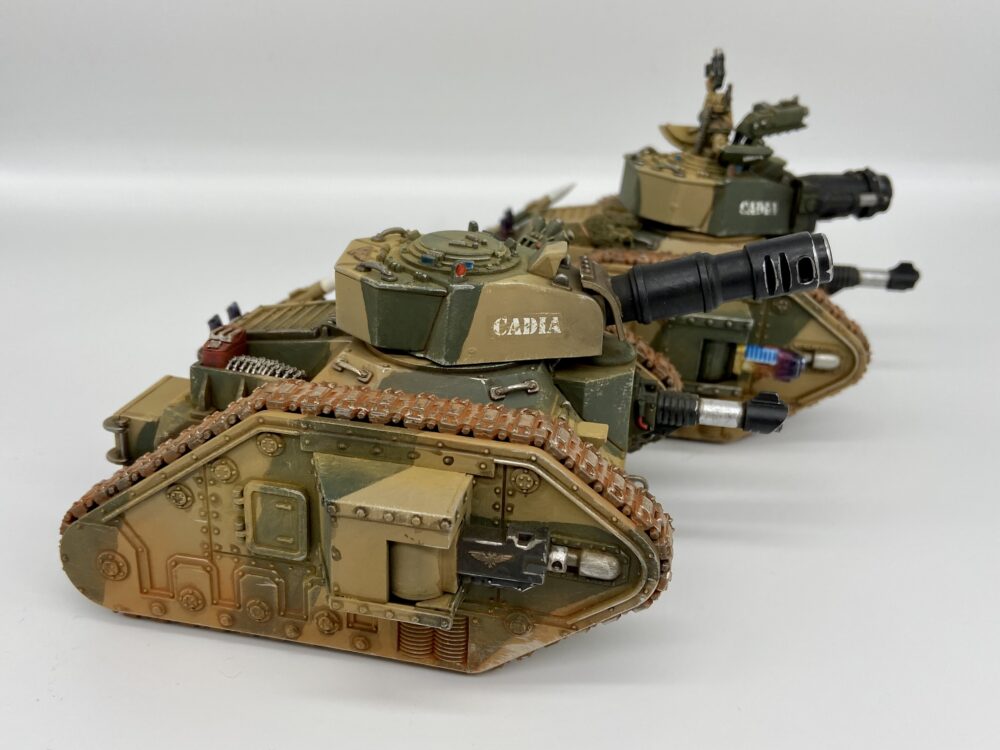 Looking back on some of my games I think I lost in the Deployment Phase.

Is placing Pask in plain sight so that if I get the first turn he won’t have to move, therefore he can Re-Roll ones to Hit in that first turn? Nope! But who has done that time and time again? This guy!

I must remember that it’s better to hide a unit and keep it alive to shoot without its Cadian Re-Rolls of one to Hit – than it is to have that unit die in turn 1 and never fire a single round in anger.

A more cautious approach is prudent at the moment. Losing Leman Russ is easy to do, despite that new 2+ Armour Save. 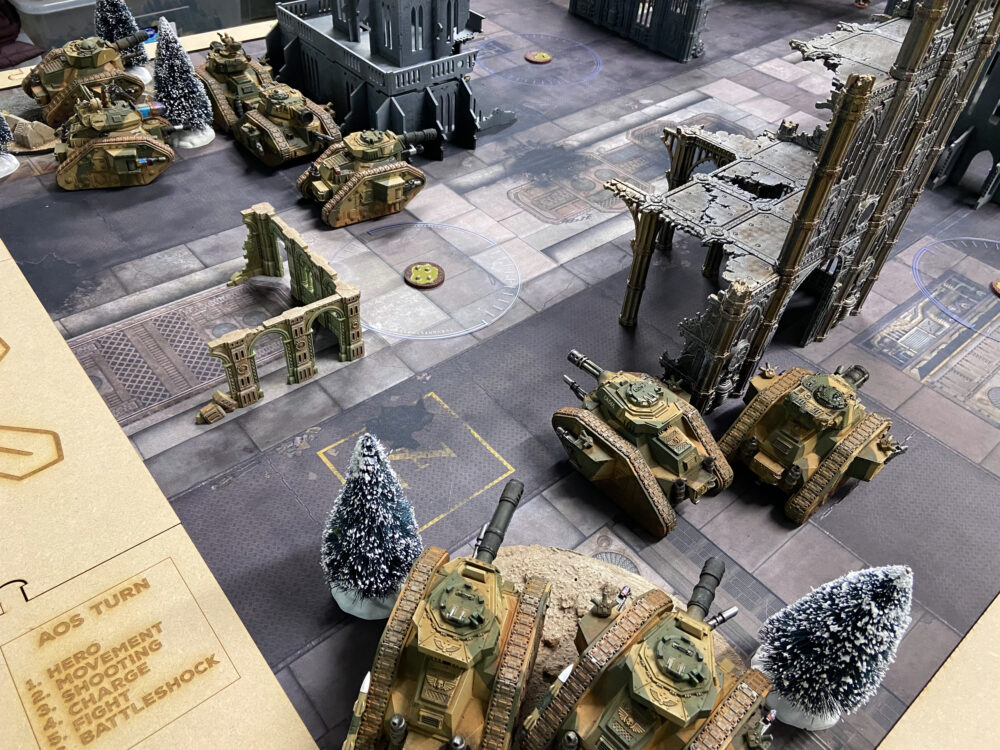 Leading on from keeping Leman Russ tanks alive, I’d like to address my Movement Phase. It needs to be better.

Watching other players in the Movement Phase is sometimes like watching a carefully curated dance. I don’t do this very well at the moment.

Movement is not just the act of moving up the battlefield. It’s the positioning of units for the ensuing enemy phases; especially the Shooting and Charge phases.

It’s not enough for me to Advance up the battlefield with 40 Conscripts and hope my guys survive long enough to choke up a charge. Because they often don’t survive. They roll over and allow the enemy through.

My Movement Phases need to have more finesse to them. 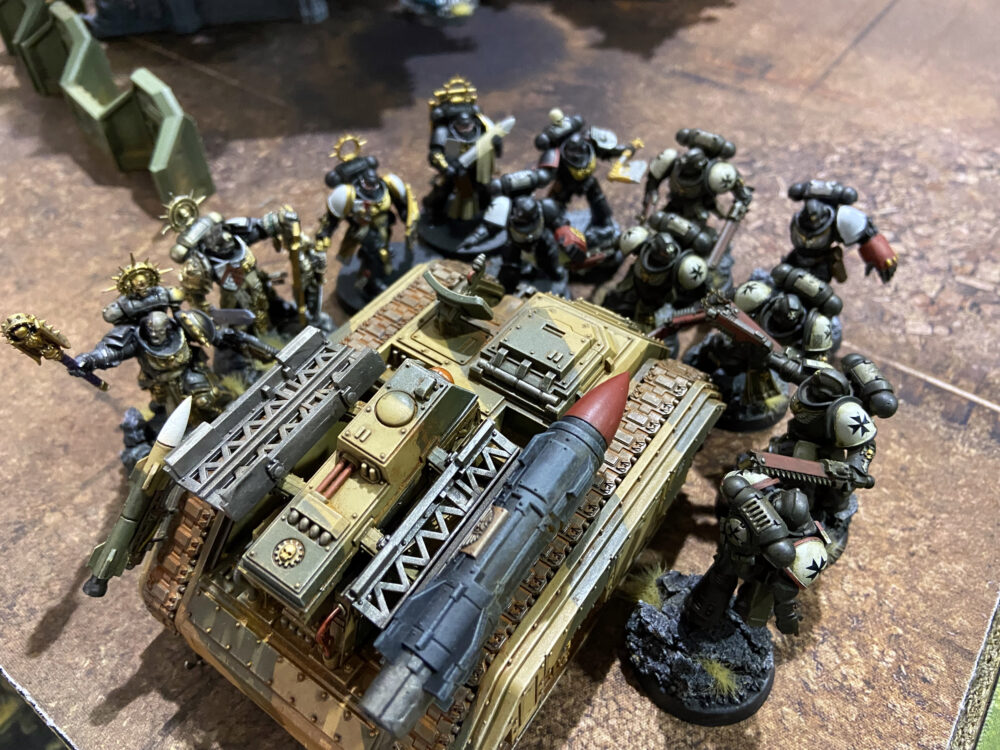 Must improve movement and screening to stop this from happening

Back to the Command Points now, a little bit.

Is using Coteaz, a Company Commander, three Astropaths and three units of 20 Whiteshields a good idea given the CP cost associated with including such units and the CP cost during the game in making those units half decent?

Should I be keeping it simple?

Are the 200~ points of characters, 300 points of infantry and 3CP worth it? 2CP for Whiteshields on three units and 1CP to buff up Coteaz to have a Warlord Trait. It’s only 3CP but that’s 17% of my guaranteed 17CP in a 2,000 points game. Assuming I generate no CP via Grand Strategist and Kurov’s Aquila. And this cost of 3CP before the game does not even include the use of Take Cover or Cadia Stands to improve their armour save during the game – which is needed turn after turn most of the time.

Those 500 points will get me nine Infantry Squads. Those 3CP can be spent on Stratagems in the game now too. That’s 90 infantry models across nine units instead of 60 models squished into three units.

As awesome as Whiteshields are right now? Maybe I should be playing simpler and not relying on these new toys as much. 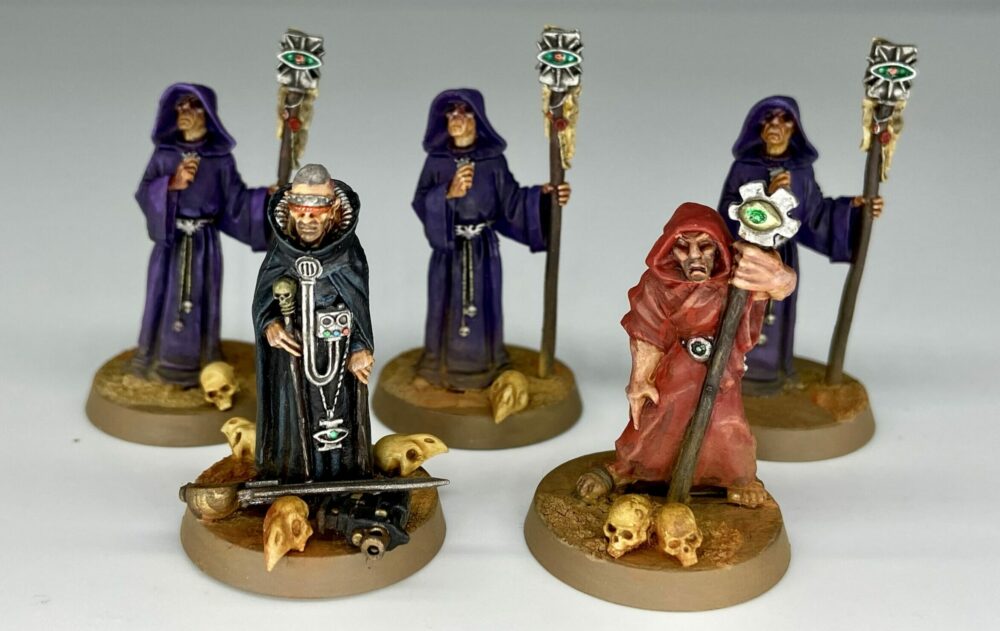 I’m increasingly feeling like playing boring is the way to go.

Just take the same Secondaries in each game regardless of the composition of the enemy’s force.

There is so little guaranteed or that’s reliable for the Astra Militarum at the moment. Secondaries are something I can control.

Taking Retrieve Octarius Data, Engage on all Fronts and Warp Ritual might be the best way of scoring VPs for Secondaries at the moment.

I’m not sure about this though, it feels a bit odd to keep Secondaries the same from game to game. I’d lie to take No Prisoners and Bring It Down – but that requires some reliable shooting. So maybe not just yet. 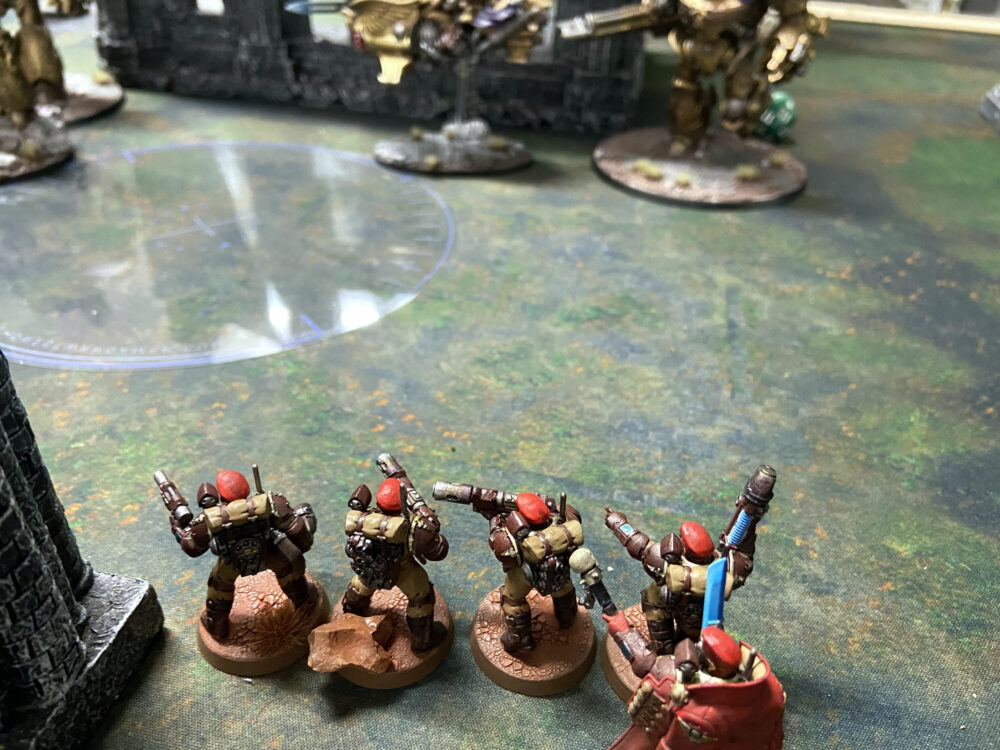 Scions for Engage on all Fronts and Retrieve Octarius Data (ROD)

And that is all, for now, folks, let me know what you think via the comments below, Facebook, Instagram, Twitter or Reddit. I have a game tomorrow, so I hope I can put some of these ideas into practice during that game…