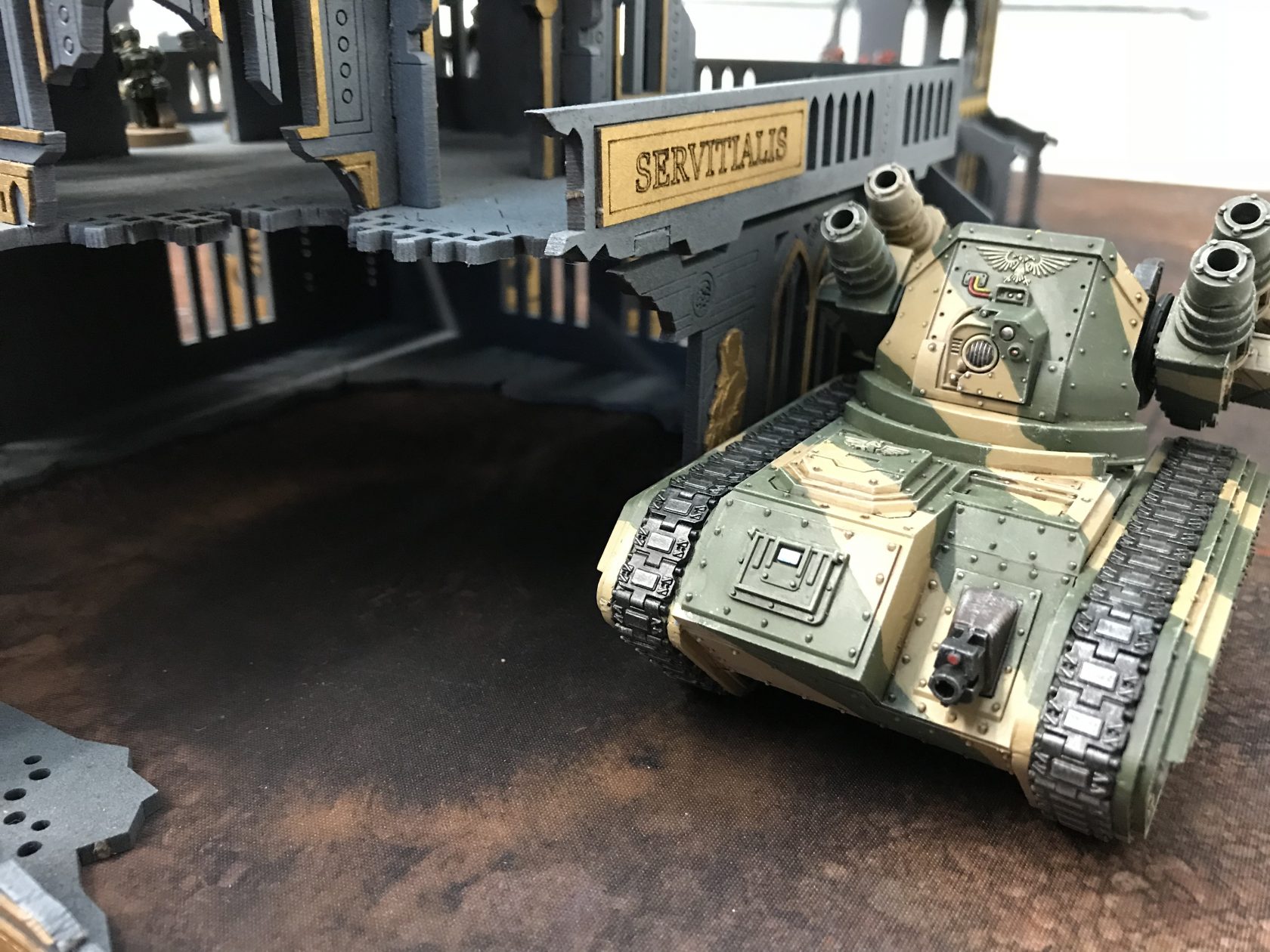 This is a longer read, we are getting into it now; Ways to Play Astra Militarum...

I’m torn between making this a Tactics article and a Ways to Play Astra Militarum article. Are they the same thing? Yes. But they’re slightly different approaches I feel.

This is a lengthy article. You’ll have learnt a lot when you come out the other side and will be armed with a few ideas about creating your first Astra Militarum force. And I hope a fire has been lit in you…

Tactics suggest an understanding of the Warhammer 40K rules. You need to know the rules in order to know what those tactics mean, when and how to use them. And also understand your enemy enough to know when certain tactics are useless. The tactics are there to help you win.

Ways to Play Astra Militarum means just that. You want to play using a force of Astra Militarum and you need to understand what those ways are within a broader context. Rather than just the context of winning and the Warhammer 40K rules.

So for me, this article is a step before tactics in the learning process of starting your Astra Militarum force. This series is a Getting Started series after all, not an improve your existing Astra Militarum tactics series.

There are many ways to play your army. Some forces in 40K have one or two playstyles because they are very good at a specific task. E.g a force might be fast and excellent at short-range attacks and hand to hand combat – but have zero long-range firepower or artillery. Like the Harlequins.

You get the idea.

So, however you imagine your army functioning, it’s certainly possible with the Astra Militarum! And that is why I enjoy them so much!

A Fork in the Road

It’s at this point things get tricky writing this series. Because now we are moving on to List Building. To very new players with no books, it’s a very tough concept to communicate. And for those who already own a Codex or the Basic Rulebook (or both), it’s a much easier concept to understand.

Therefore I’ve created a single page outside of this series that will cover Battlefield Roles, Command Points, Detachments, Points and Keywords.

I hope that will bring everyone up to speed and in line in terms of their Warhammer 40,000 knowledge. If not, let me know!

It’s very hard to cover this without becoming very bogged down in the minute details of the Warhammer 40,000 rules and the way lists are built. But I hope this gives you an overview of what is possible and show you that a lot is possible – nearly anything is possible.

Remember to use the Glossary too for terms that you are unsure of!

I have touched on Command Points in the past and I will do it again now, just to ensure we are all in the right place.

In 8th Edition the more Detachments you took the more Command Points you got, as a general rule of thumb. The problem with this was that forces that could field lots of cheap units got more CP, like our Astra Militarum. While forces with expensive units in terms of points got a lot fewer as they were unable to fulfil multiple or larger detachments.

Now, in 9th Edition, the number of CP you start with is simply determined by the game size.

Now every force starts with the same number of CP.

Detachments are key to this next portion of the article and will be referenced a lot. At the most basic level a detachment does the following;

At their most basic level that is what a Detachment is. Your build-up your force from Detachments. You will probably want just one Detachment. It’s a way of organising your army into valid portions.

The Patrol, Battalion and Brigade Detachments all cost CP; 2, 3 and 4 respectively. But if your Warlord is in that Detachment then that CP is refunded. Therefore they cost zero CP. If you then take, say, a second Patrol Detachment that will cost you 2CP and those are not refunded. You get the idea. We are being encouraged to bring a single detachment.

Each detachment has a minimum requirement.

They also have maximum, e.g. a Battalion cannot have more than 3 Heavy Support choices.

If you’re playing Narrative or Open Play and are yet to move to Matched Play Detachments and the various rules that govern them will be less of a concern for you. Detachments are used and enforced in Matched Play to try and keep the battle fair.

As we are starting with tanks I’ll give a more in-depth example of how a tank based Astra Militarum force can work. As we go on, these examples will be explained less and less – as the terms and ways of constructing a force become more familiar.

So now we have our valid Battalion Detachment;

And that’s it. Our mainly tank army is complete and valid.

But, we can bring more Leman Russ if we desire and still use the same Battalion Detachment. Each Leman Russ squadron can have 1, 2 or 3, Leman Russ, in it. Therefore inside this single Spearhead Detachment example, we can get;

Now that is a tank army! 11 Leman Russ! Note we have no Troops as the Spearhead Detachment has no Troop requirement. The Spearhead will cost us 3CP though as we do not get a refund on CP for having our Warlord in this detachment, this only applies to Patrol, Battalion and Brigade Detachments. 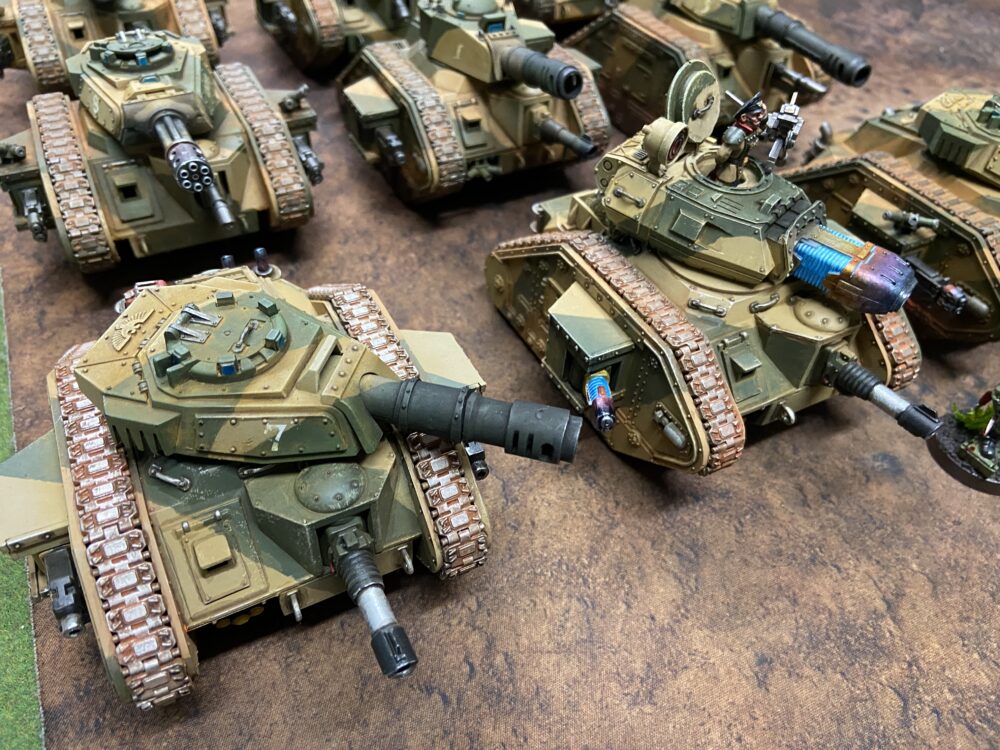 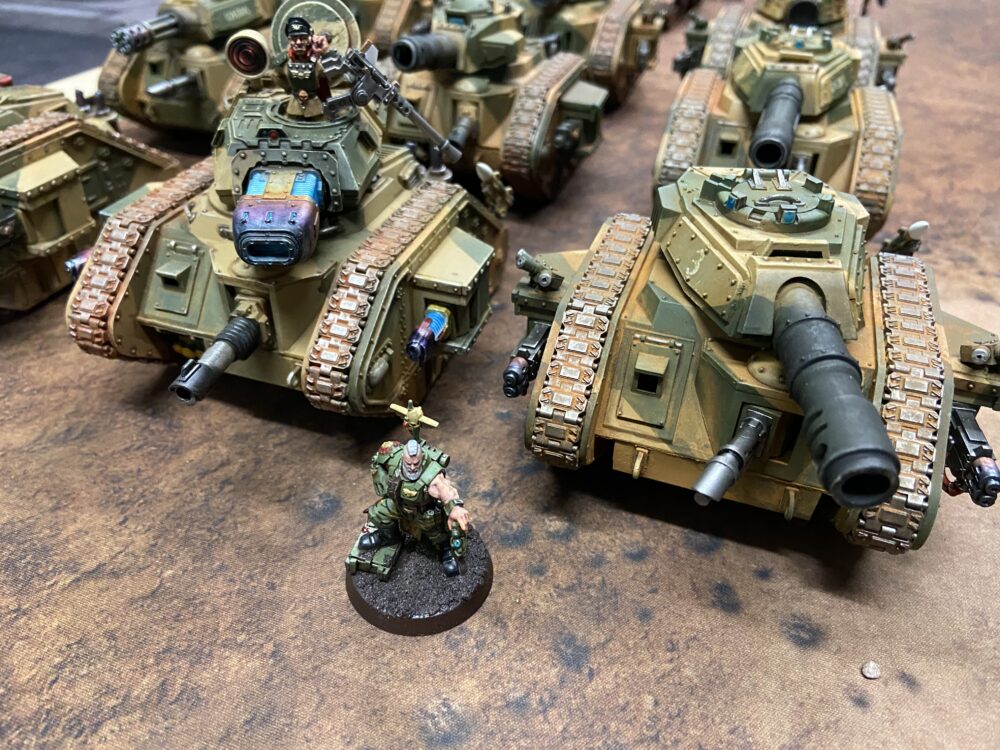 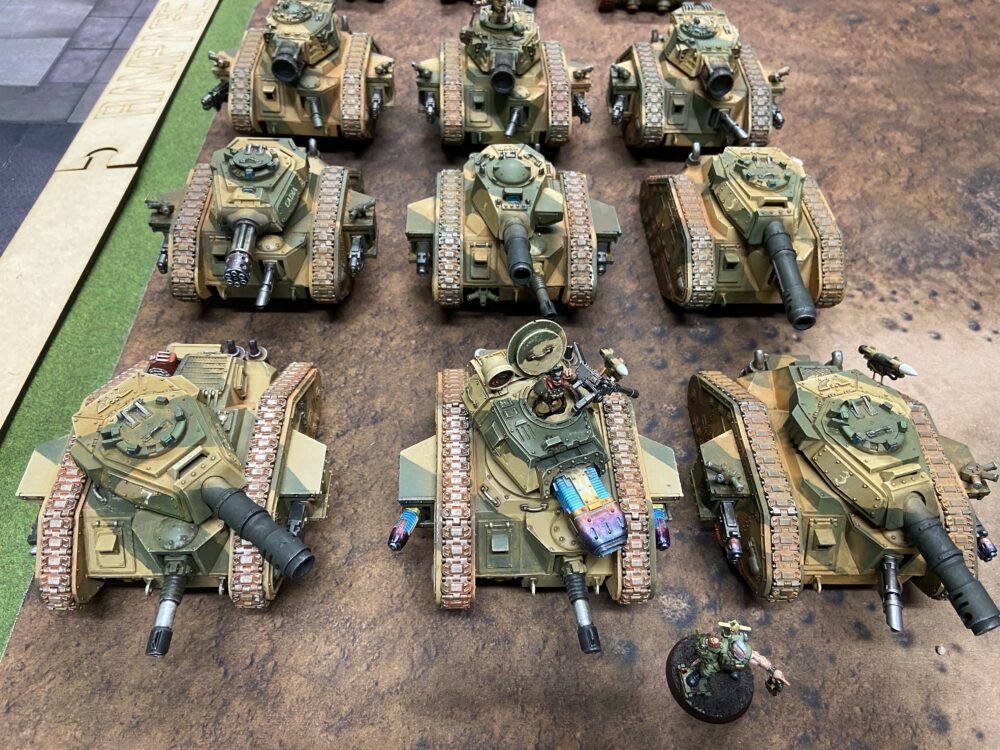 You can take a similar approach with Artillery, using Wyverns and Basilisks within a Battalion.

As we go on I hope you can see how the Battlefield Roles work and how you can mix and match units to fulfil the requirements of a detachment. As we move on you will see more and more the versatility of the Astra Militarum and their ability to field a range of different types of unit to fulfil many different roles in battle. 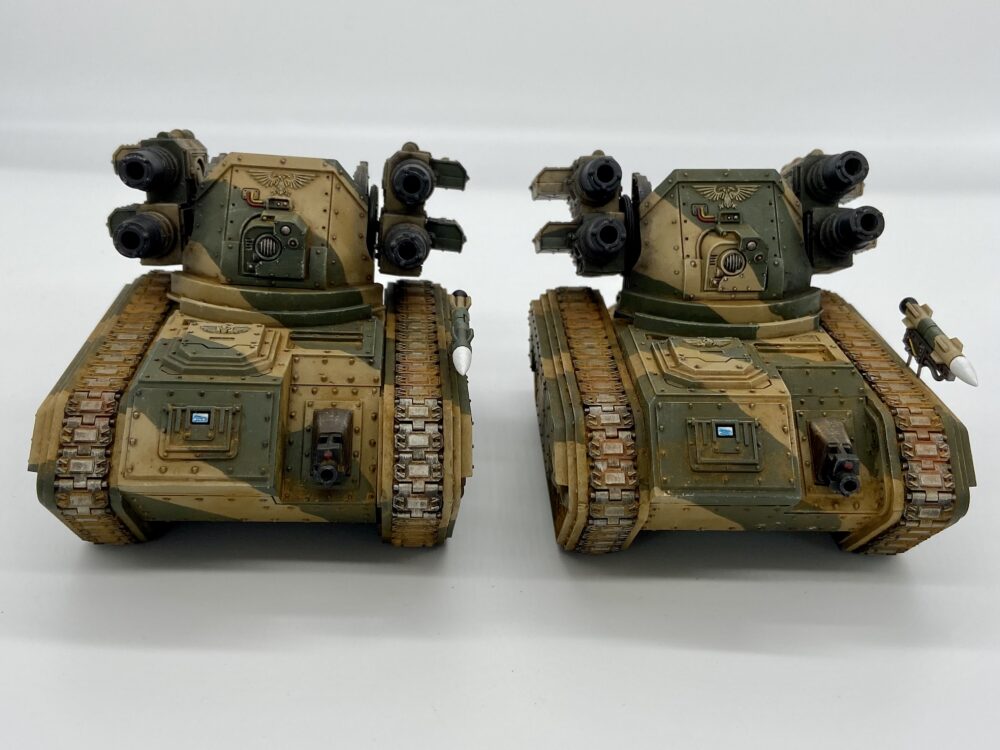 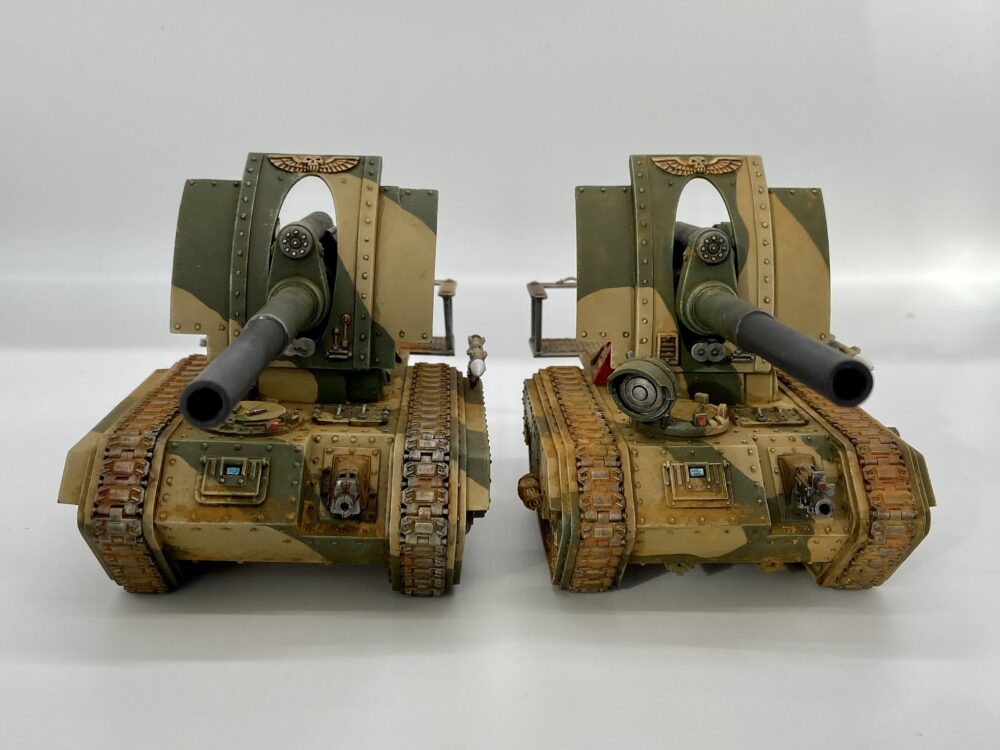 Infantry, All the Infantry

Nearly all detachments allow some Troop choices. The Battalion Detachment requires 2 HQ choices and 3 Troop choices. You can also optionally include;

And the Battalion allows a maximum of 3 HQ choices and 6 Troop choices.

From this, I hope you can see how flexible the Battalion is and how the various units of the Astra Militarum can fill this detachment. Not only can it be Tank or Artillery heavy, but you can fit a lot of infantry into this Detachment too.

For example, this force fulfils the Battalion Detachment and then adds in even more infantry – maximising the Orders the Company Commanders (see the Glossary regarding Orders) can dish out.

We’ve now got 72 models in our army! It’s extreme but that’s an infantry force! 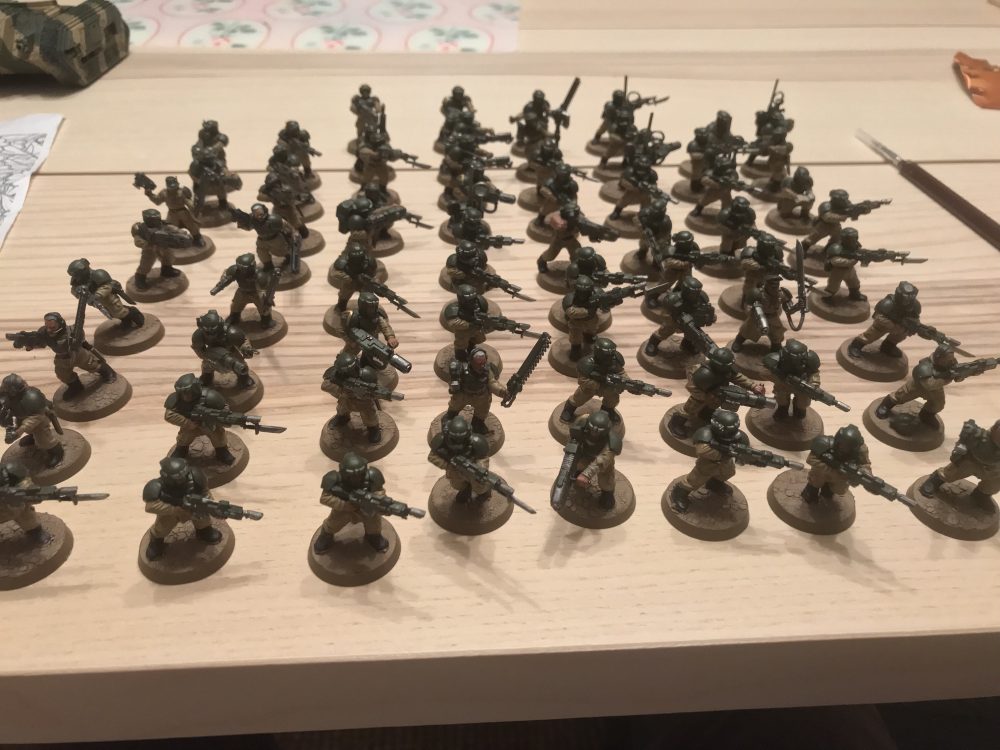 The Best of All Worlds

The above examples are extreme examples; lots of tanks or lots of infantry or lots of artillery. These armies are fun, for sure.

But they can lack certain abilities that make winning or even holding your own against a tough enemy hard work. Of course, some extremes can be a superb winning formula. Taking only Leman Russ and Artillery can blast your enemy from the board in two turns and seal a magnificent victory – but when it comes to objectives, you might be found lacking.

I find a mixture of Battlefield Roles and unit types gives me a diverse force that’s fun to play with and fun to play against.

Each to their own, you’ll find your own methods in time. 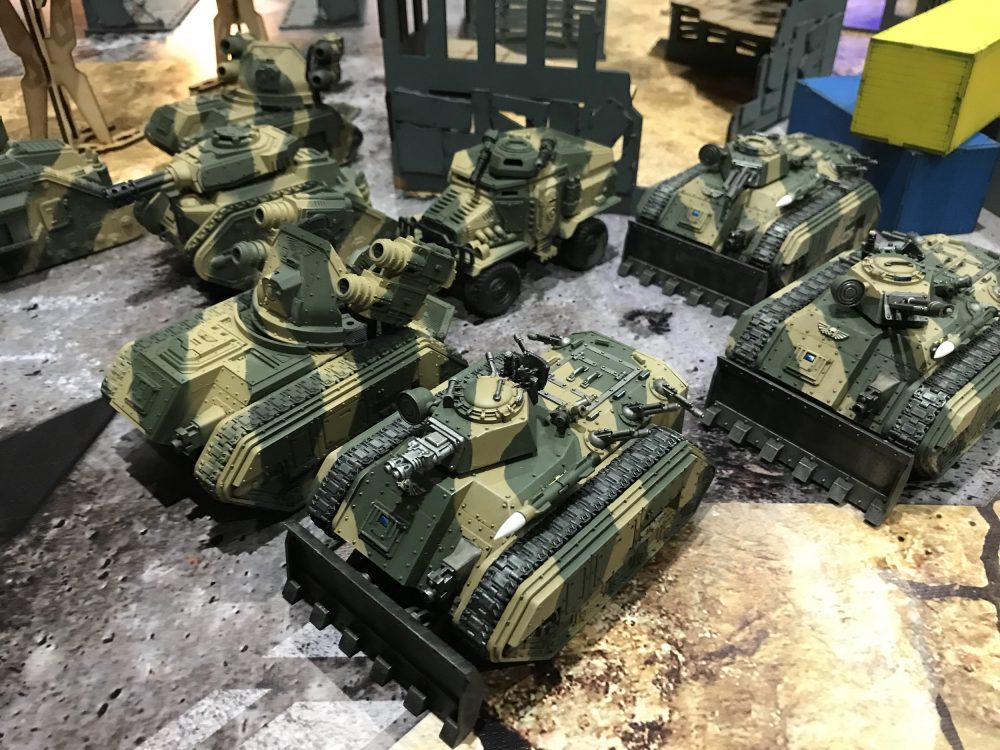 My mixture of Artillery, Leman Russ and Transports – Ways to Play Astra Militarum

The Rule of Three states that;

Each datasheet can be used up to 3 times per army.

This is usually used in Matched Play.

If you want more Leman Russ? You need to use another datasheet. The Tank Commander and Pask are not the Heavy Support Leman Russ choice. They are both their own datasheets. So this is valid;

We don’t have more than 3 of any one datasheet in that list. Pask is a named Character, there is only one of him in the universe, therefore we can only take one of him in our army.

The Rule of Three does not apply to Troops or Dedicated Transports.

Where to Play 40K – Astra Militarum Getting Started – Part 5