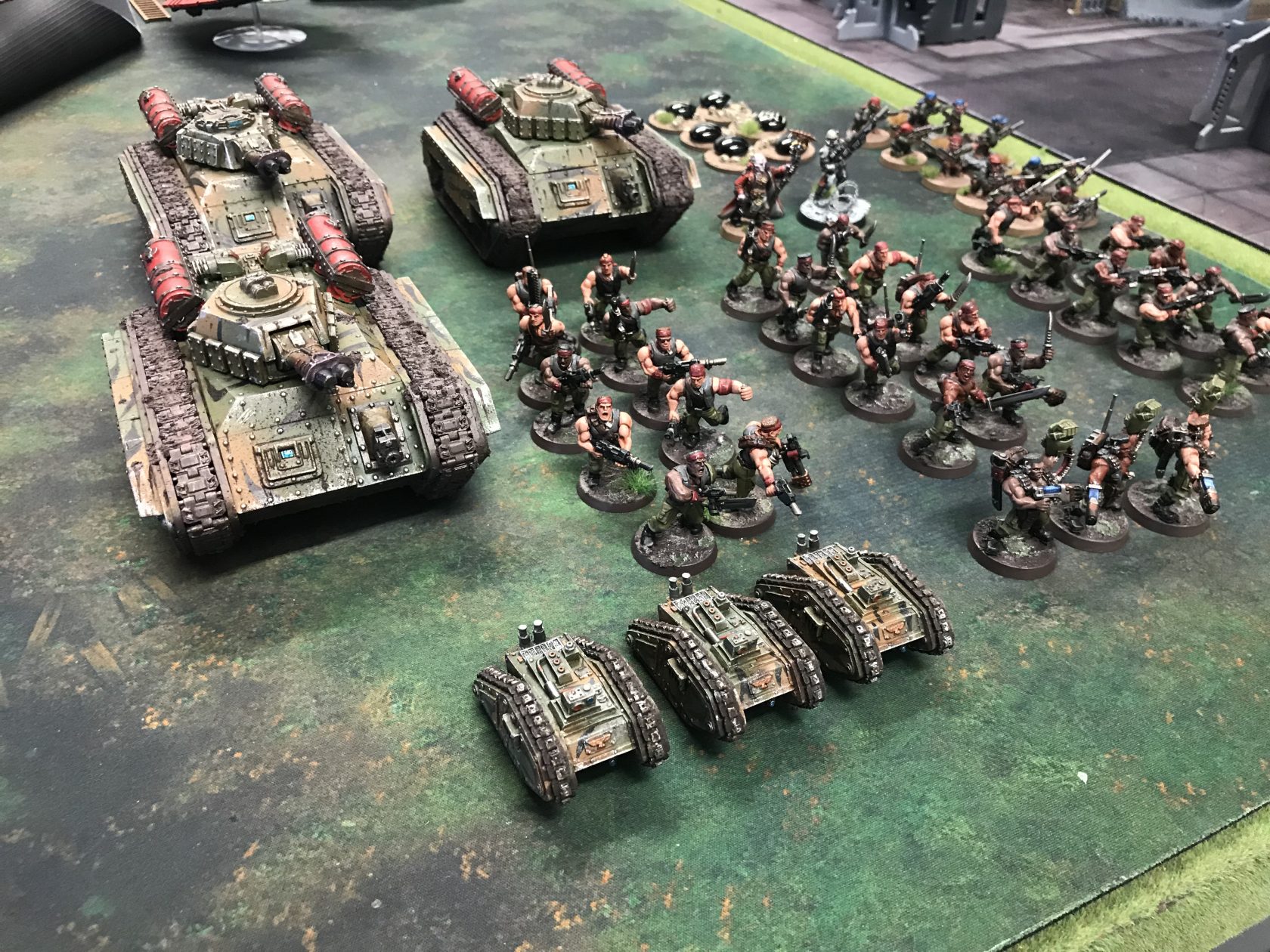 We finally managed to revisit the 40K 1v1v1 Wellspring Mission. After the first try was a bit unbalanced, we tweaked some aspects to try and make it fairer.

The can view the original 40K 1v1v1 mission here.

But to give you a quick run-down we went for the following stripped back rules and Victory Points system;

We decided though to make this cap per player turn. Rather than per game turn. This meant if you killed something in an enemy’s Fight Phase you can still get a VP for that kill – even if you’d killed something of theirs in your subsequent Shooting Phase.

So if I kill an Eldar unit in my Shooting Phase I get a VP. If the Eldar then charge me in their Charge Phase – but I destroy that unit. I get another VP because it happened during their turn. Not mine.

We decided on this during turn two I think once charging happened and things really started dying. It worked well! You’ll see…

You can also read about painting my Psyker, Hellhounds and Cyclops.

I will do my best to give a turn-by-turn account of the battle, but it will be hard! A lot is happening. We rolled off to chose deployment zones and then took it in turns to deploy a unit each. Eldar finished first and would go first. Then Chaos. Then me.

The Eldar had very little on the battlefield as they Deep Struck(?) their Guardians via a Stratagem. Only the Wave Serpent, Flyer and Rangers were on the field. Just 3 units. 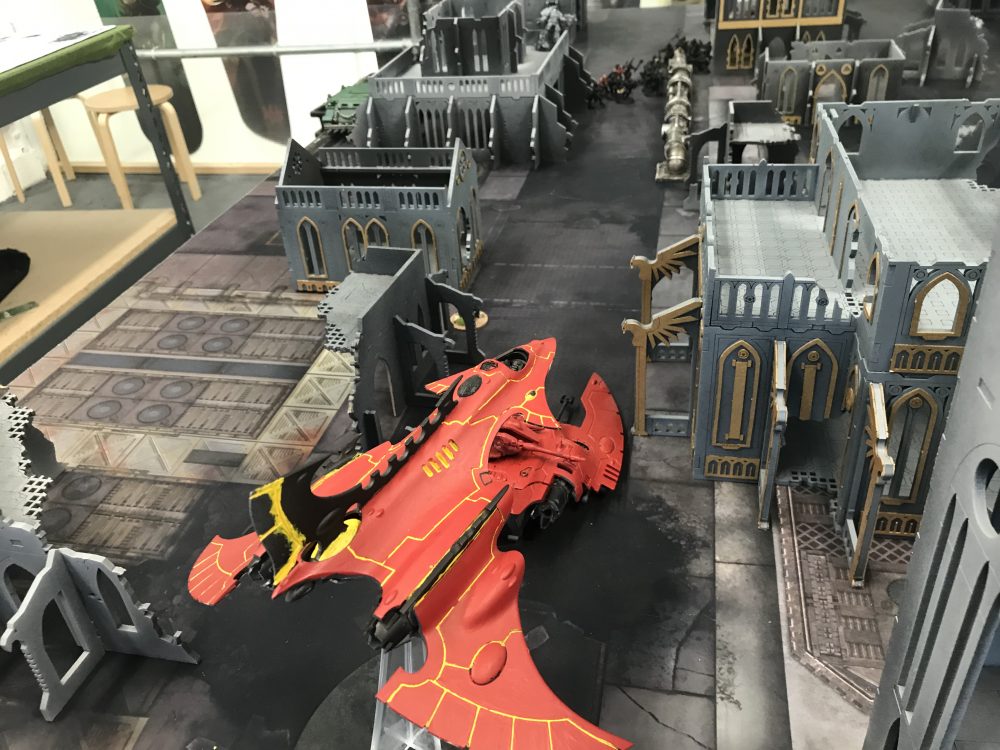 Eldar Deployment and Chaos in the distance, my units were off to the right 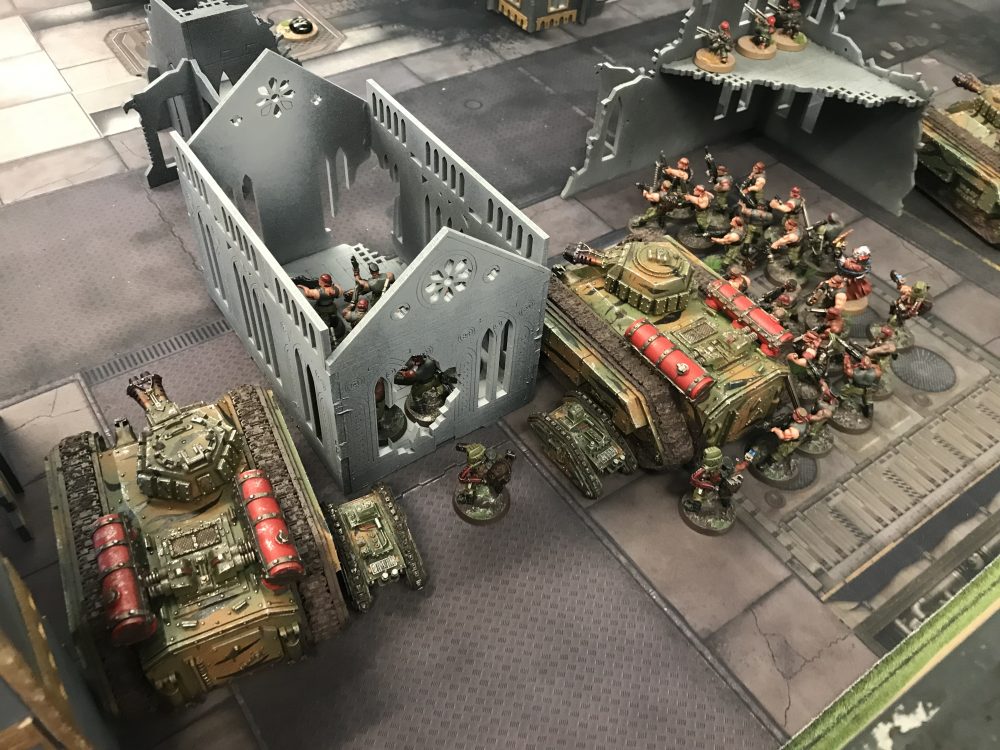 The Eldar did not have much on the table But the Rangers stripped 2 wounds from the Vindicare – somehow he was closest after they turned up late to the battle using Infiltrate. But Vindi lived! A few Cultists died but with so little on the table the Eldar’s shooting was minimal.

The forces of Chaos were up next. They went straight for the Eldar and charged the lone Wave Serpent with Cultists and Bikes. But not before taking several wounds from the Obliterators. The Hellbrute turned its attention to one of my Hellhounds, which luckily got away with only losing 5 wounds. Thus leaving it in its upper bracket still. The Chaos attack on the Wave Serpent took it down to 5 wounds but they were unable to finish it off.

With the Eldar and Chaos battling each other I swept everything forward, using Move, Move, Move on every Infantry Squad. This put them all right up and into the middle of the table. The Hellhounds and Cyclops all moved up too. The Hellhounds let rip. Wiping out 8 Cultists and all 5 Rangers – unfortunately, 2 Cultists survived so no VP from that squad. But I did get one from the Rangers. The Vindicare opened up against an Obliterator, this was the first time for me using the new Assassin rules, and the  Obliterator went down! I also took three more wounds off the Wave Serpent using Psychic Maelstrom.

The turn ended with 2 VPs for the Astra Militarum and none for anyone else. 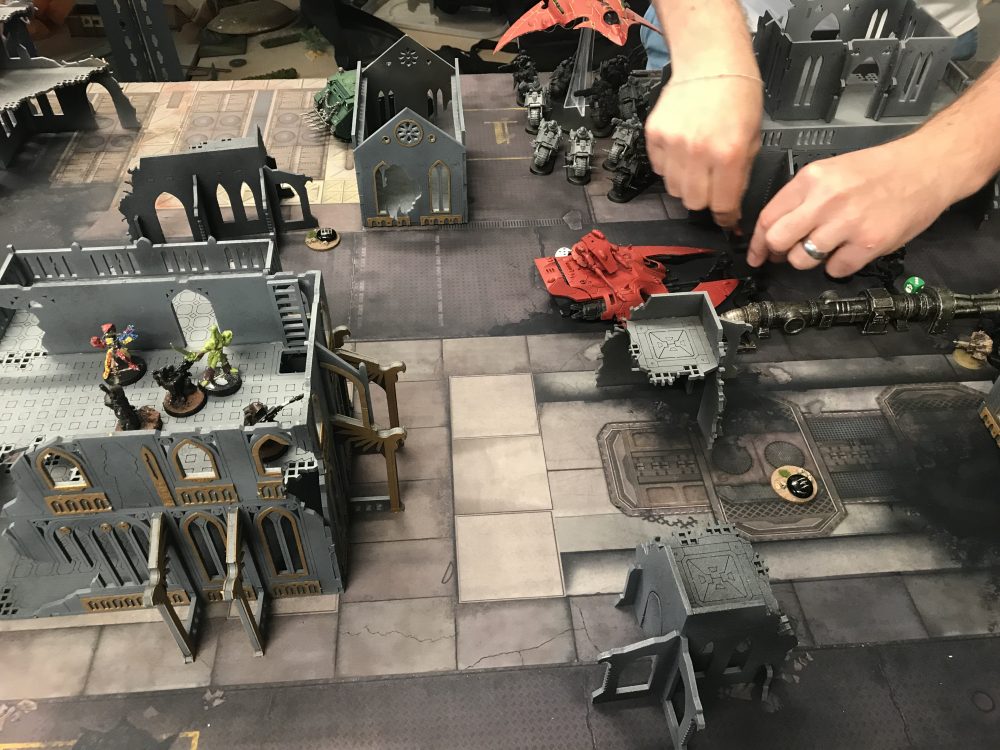 Wave Serpent before the charge 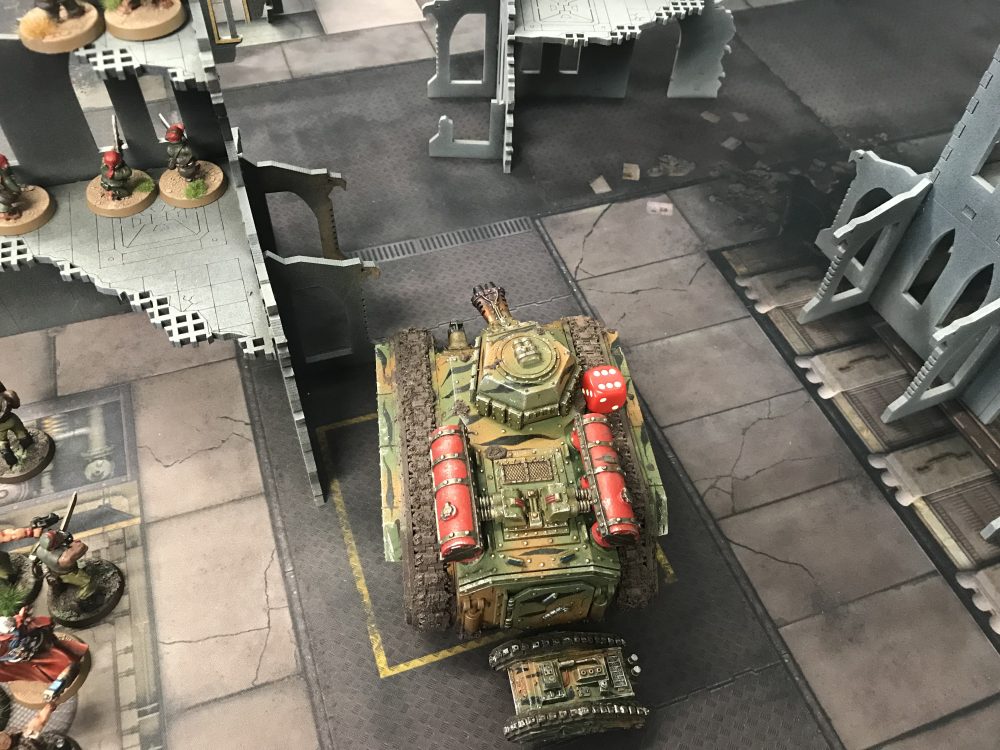 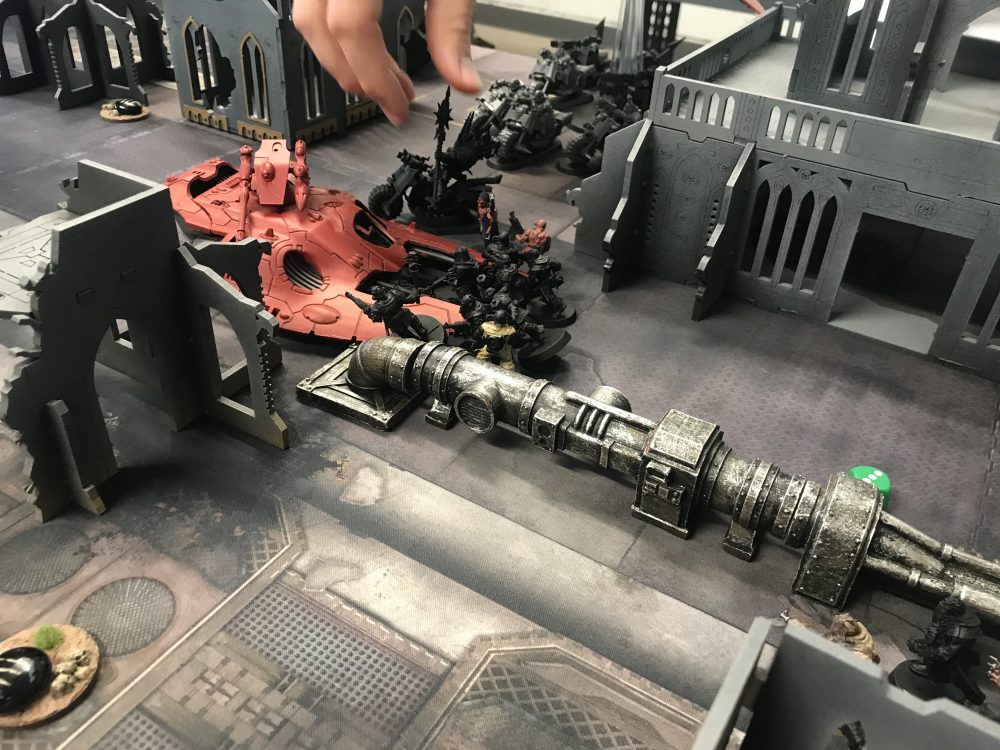 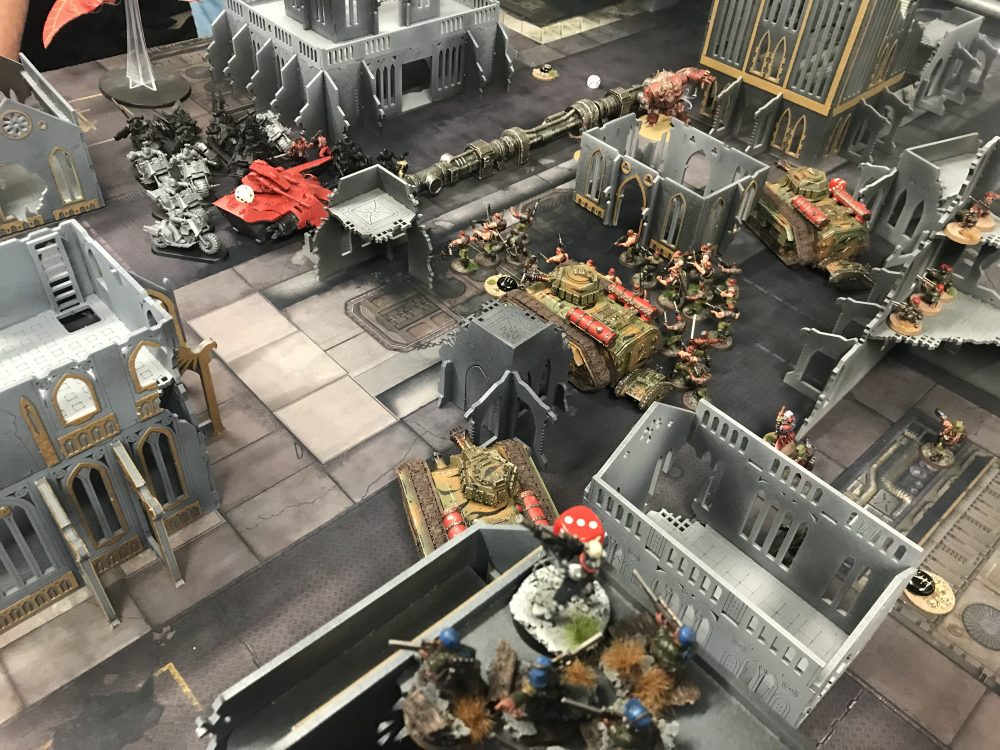 This is where things get a little hairy and blurry. I will do my best to cover the main events.

The Eldar were not on their own objective or any others, no VPs gained.

The Guardians came on and took the Chaos Objective. The Dire Avengers, Dark Reapers, Spiritseer and Autarch got out from the Wave Serpent that was in combat with the Chaos forces and moved towards the centre objective. The Flyer came in towards the centre too. We decided at this point that you COULD fire into combat, but only if your ow units were not in the combat. And if you did so, you had to roll to see which unit you hit! Fun!

The shooting was minimal from the Eldar. The Hemlock took a few wounds off a Hellhound and so did the Dark Reapers.

The Charge and Fight Phases were where things get very blurry. The Dire Avengers charged by Catachans, all of the Dire Avengers died from Overwatch. Now, this is where the VPs from killing enemy units per player turn comes in. It was the Eldar turn and I killed the Dire Avengers, I get a VP. This puts the Astra Militarum now on 3VP.

Similarly, in the Fight Phase, the Wave Serpent hit at the Chaos Cultists and Bikes. It did nothing. But it got shredded by a Thunder Hammer from the Chaos Warlord. This giving Chaos 1VP.

The Eldar did manage to charge in with the Dark Reapers, Spiritseer and Autarch – finishing off one squad of Catachan – giving the Eldar 1VP.

The Chaos army was not on their own objective or any others, no VPs gained.

The Rhino moved right around to the Eldar objective to take it.

With the Wave Serpent now gone the Biked and Cultists made for the table centre also. An Obliterator and the Hellbrute finished off a Hellhound right in the centre, which exploded. The Autarch died from this, mainly because he took so much damage on the charge against a Hellhound last turn. It was only later the Eldar player released that Overwatch cannot be used against an Autarch! Anyway, the Autarch was dead from the Hellhound explosion. Some Guardsmen were lost along with a couple of Dark Reapers. A Cyclops was also taken down to one wound.

Everything that the Chaos could shoot at the Cyclops did so. It remained!

Cultists and Hellbrute charged into Guardsmen to reach the table centre also!

I had my own objective giving me extra 1VP.

Now it was all about the middle and the Cyclops that were there.

The one that remained with one wound went boom after re-positioning. I rolled a 6 for distance! It was madness. See the below before and after photos. The metal Terminator is a proxy for a Dark Reaper. The single explosion destroyed;

The last (leftmost) Cyclops then went off to dealing a few wounds to the Hemlock and finishing off the last couple of Bikers.

The table centre was now clear and I had picked up another 2VP from killing units. This was almost like a reset. The centre objective was as lonely as it was at the start of the game! 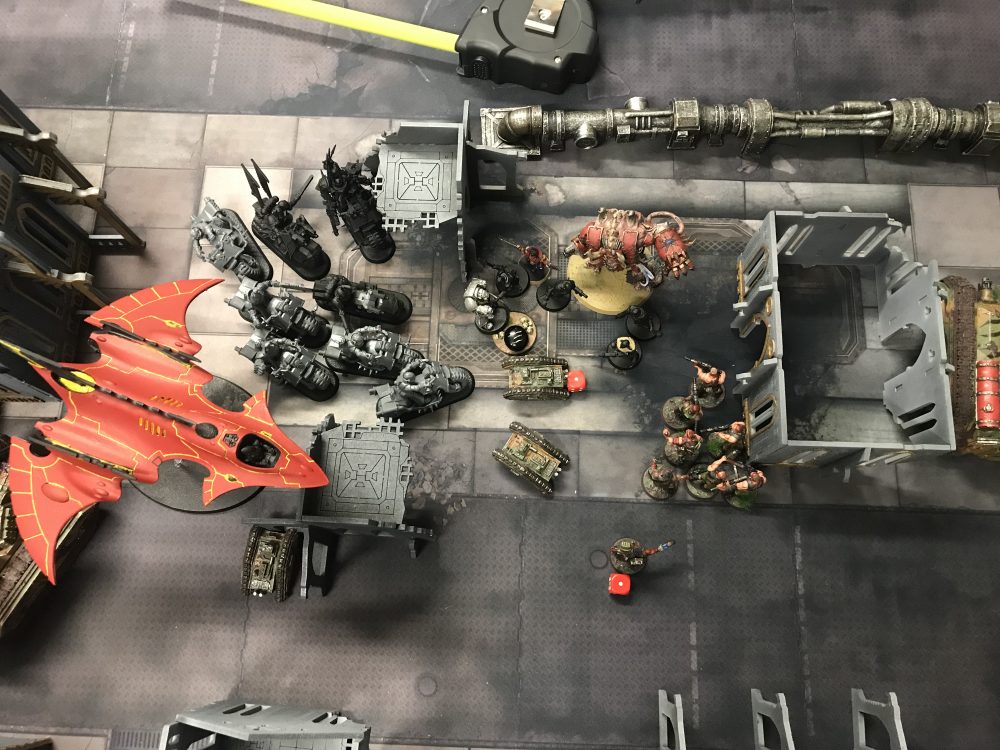 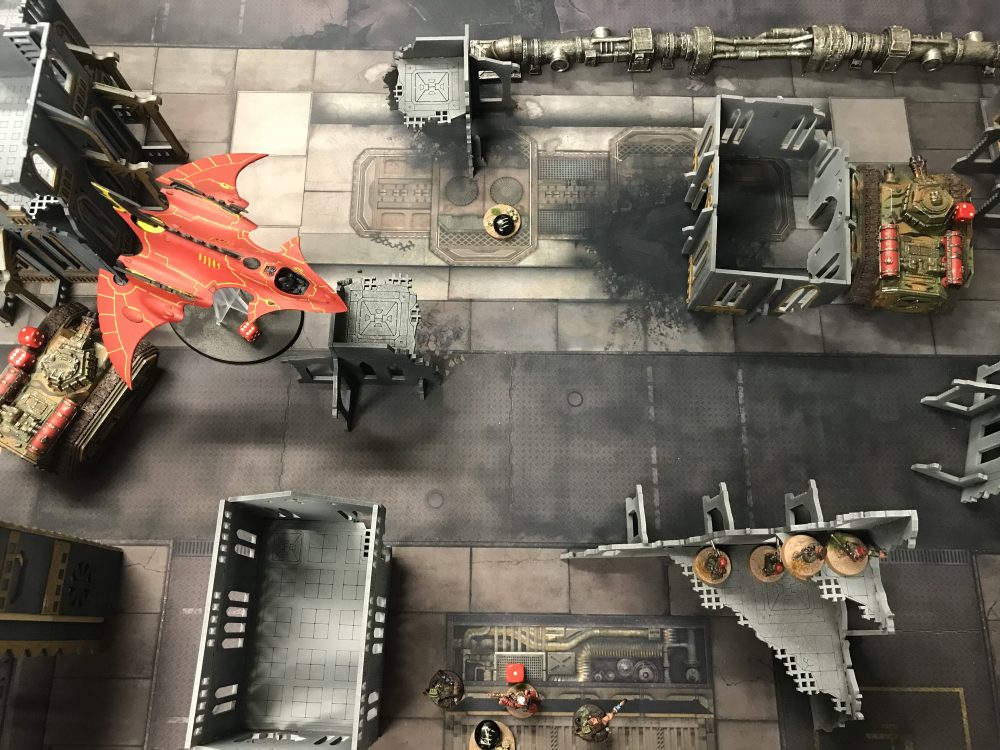 We ran out of time here and it was 5 to 6 to 6. The Eldar being on 5. This put Chaos and myself joint first! The third turn would have been interesting. Because there was so little left on the table top.

I had a Hellhound, 10 Ratlings, a Vindicare, 2 Company Commanders and Psyker. The Eldar only had the Hemlock after the Chosen mashed through all the Guardian Defenders (we did resolve this be giggles in turn 3). The Chaos side has 3 Marines, an Obliterator, a Rhino and 5 Chosen. It would have been a race to the centre and then another blood bath!

But a draw is fine and it was a very fun game!

This version of the mission was a lot more balanced, with a joint first and only one VP between first and second, you cannot really get any closer than that! We will certainly use this 40K 1v1v1 mission again, I am sure. I do not think it needs any more tweaks.

Scoring at the start of your turn really does make you work for those objective based VPs. You get to the centre then have to survive for two enemy turns before you can score that precious 3VP. No one managed it, but we all tried. Someone arrives and gets blasted into hell, then someone else arrived and the same happens to them. It’s just a meat grinder!

All my Catachan infantry was painted by Chris from The Unrelenting Brush – pretty sweet eh! 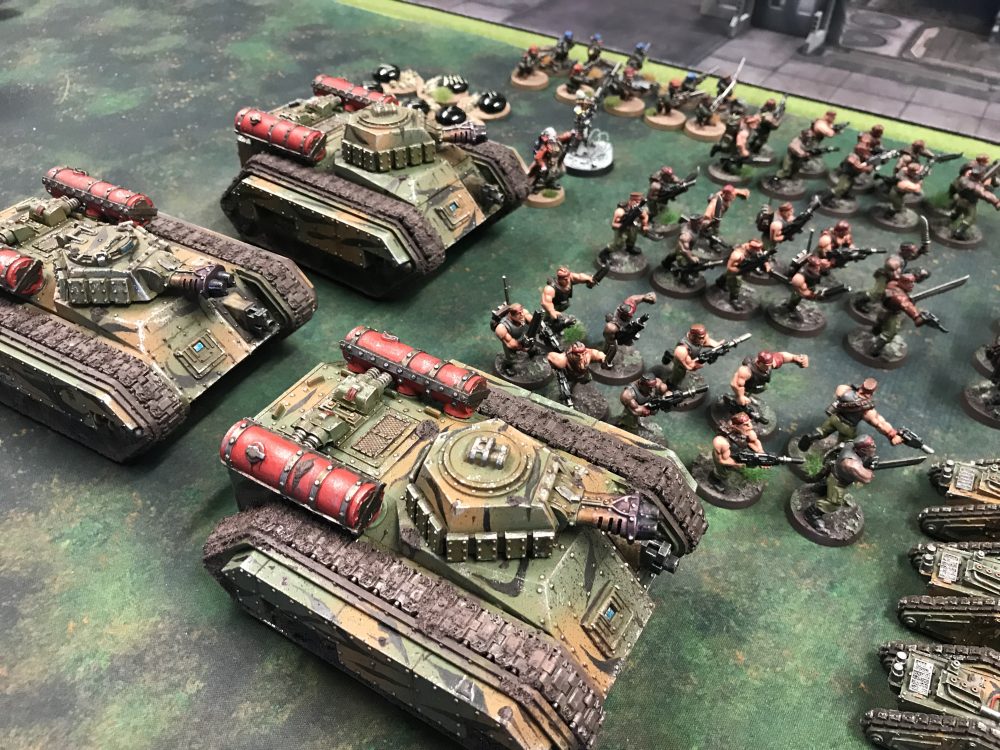 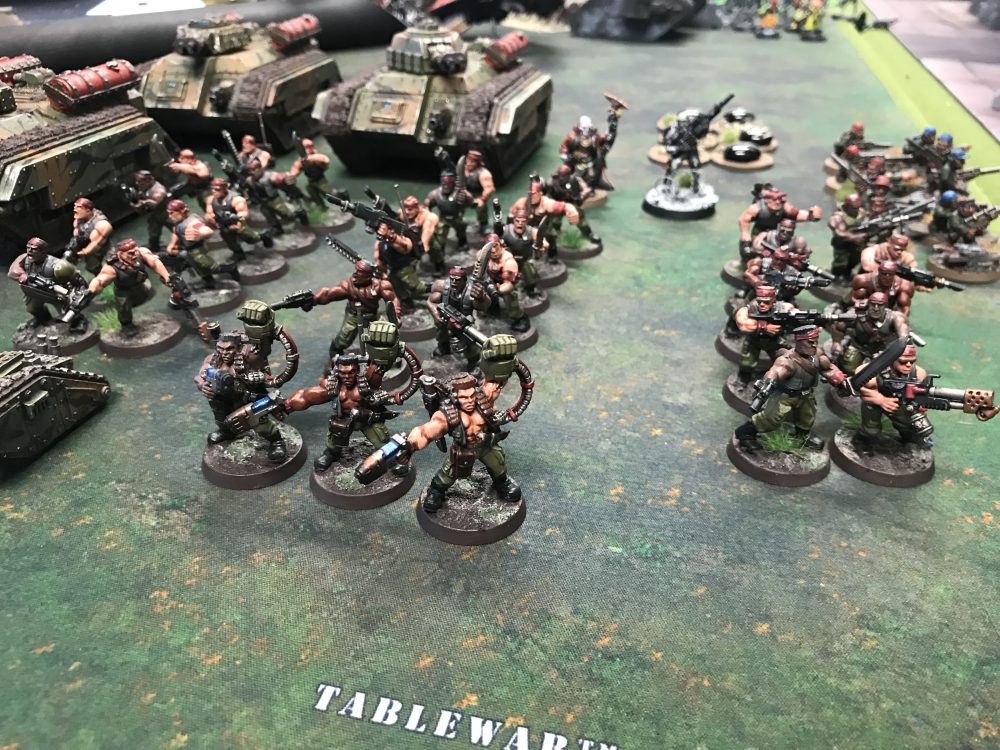 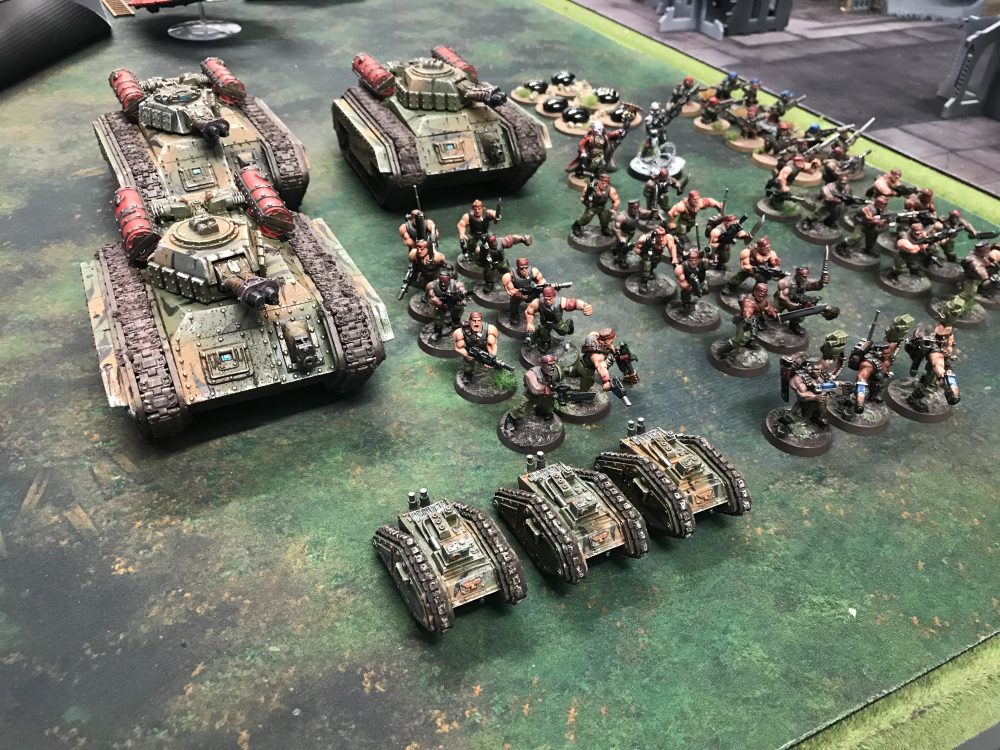