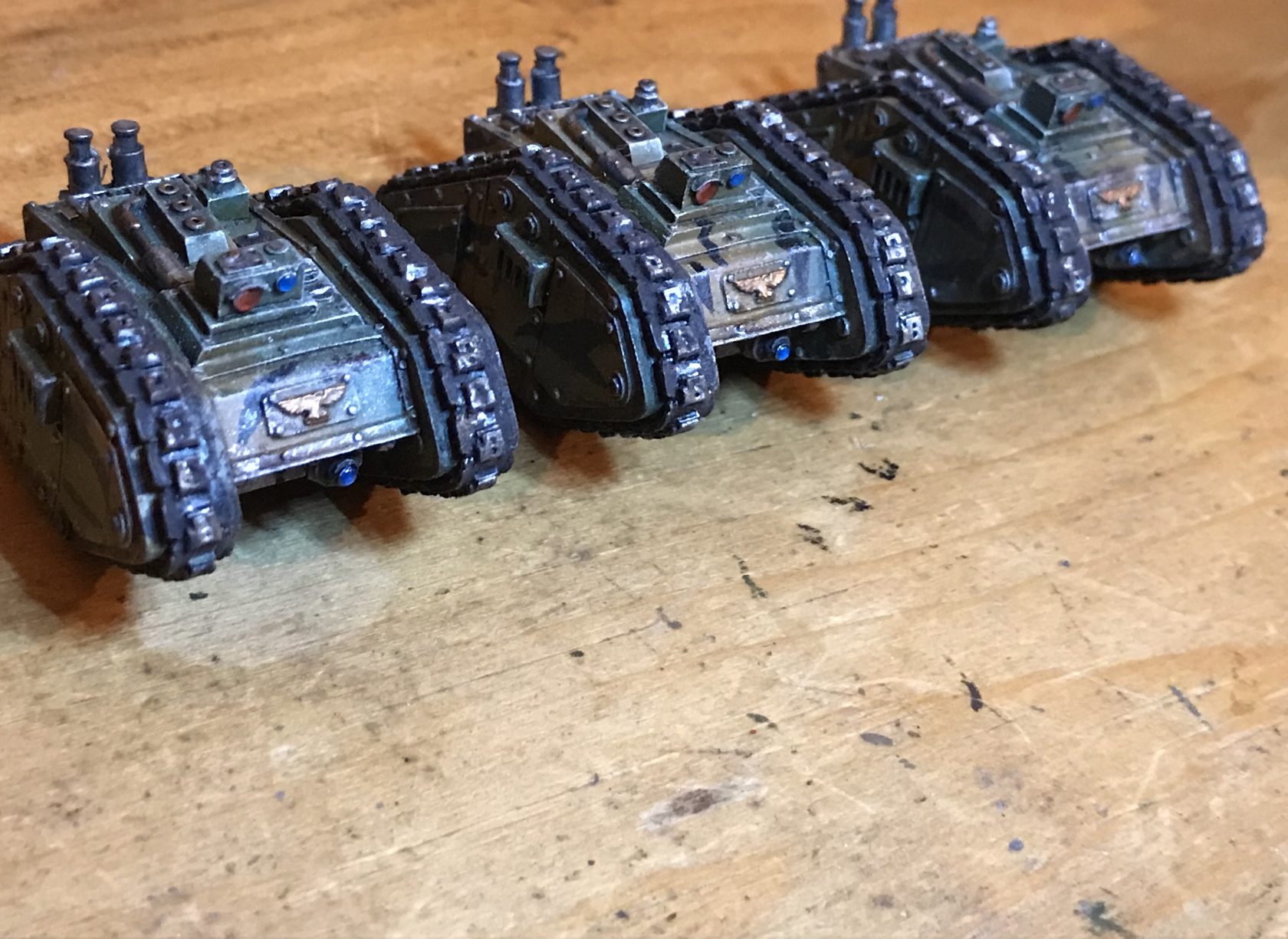 I’m on a roll! Autocannons have been done and now my three Catachan Cyclops Demolition Vehicles are complete too! This is the first part of my Catachan force done.

What is pretty awesome about this is that the Cyclops is a Heavy Support choice and three make a Spearhead Detachment – plus a single HQ, which could be a Psyker.

Come to think of it, a great HQ to bring with these would be a Catachan Tank Commander with a Demolition Cannon! Someday maybe. Brutal Strength would all him to re-roll the number of shots on the Cannon. And with Grinding Advance he can, of course, fire twice. Now then…

Because he’s firing twice and Brutal Strength allow you to re-roll one dice. Can he re-roll the first and then the second shot? They’re after all two separate shots of D3. Hmmm.

Anyway, back to the matter in hand.

I now have these cute little tanks to bring alongside my Cadians. At 180 points for the three plus some form of HQ, it’s not a small investment. The Cadians will want to make sure they get a good return for allowing the Catachans to field such an unconventional weapon.

I have this feeling that they will be priority number one when they hit the battlefield so they need protection. I’m thinking two Chimeras containing Guardsmen to act as line-of-sight blockers.

Or I can keep them back and behind terrain. Thus keeping them amongst my own forces and then wait for enemy deep strikers to arrive. They could act as deterrents for deep strikers. Stay away from the tiny tanks!

I do have three Catachan Hellhounds to complete which will eventually be used for hiding these tiny tanks.

So the weapon has D6″ range. Which can be awful. Roll a 1 and you’re not hitting anything. Simply because in order to hit anything within a 1″ range you need to be in combat with something. This is unlikely.

But once we get over the fact the range might suck, I love these little guys.

They have the ability to do a lot of damage and if you can somehow drive one into a sweet spot in the enemy lines then you could really ruin somebody’s day.

Using MathHammer, against a T7 enemy with a 3+ Save we do on average 7 Wounds. This is a nearly dead vehicle and considering we have three – we should definitely have a dead vehicle. And if we hit that sweet spot then we could have multiple dead vehicles! 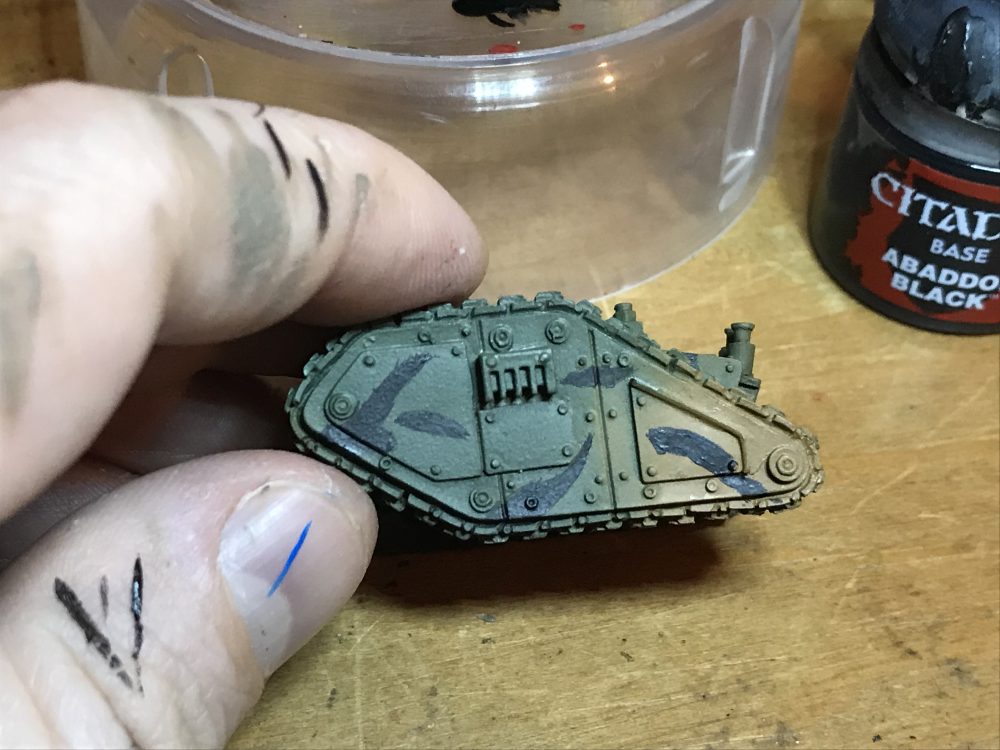 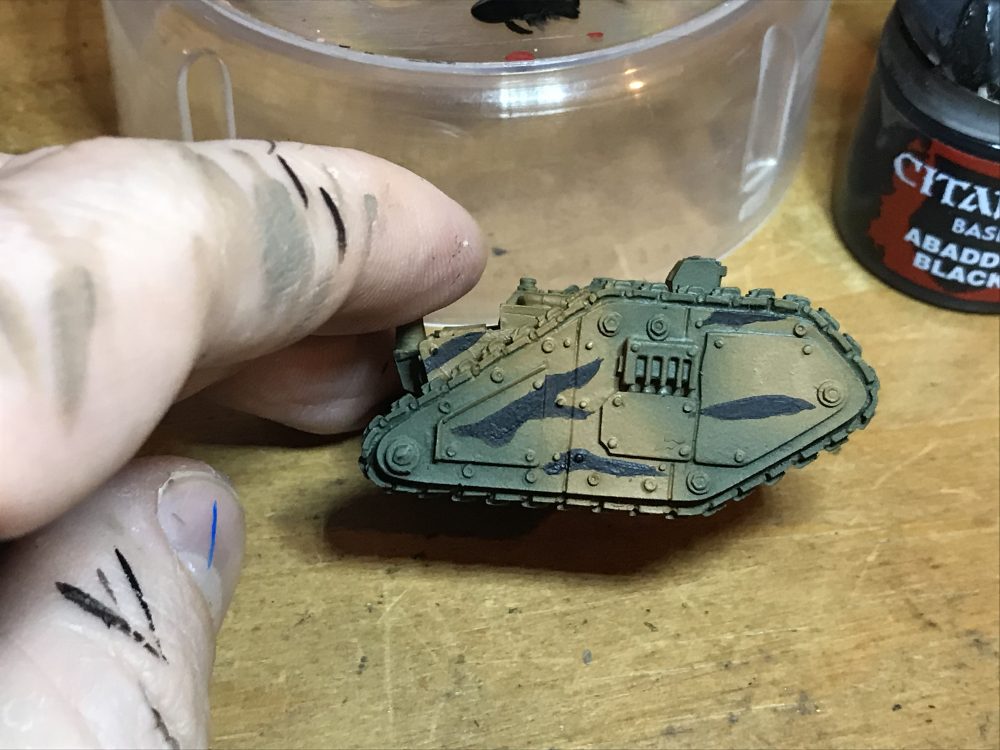 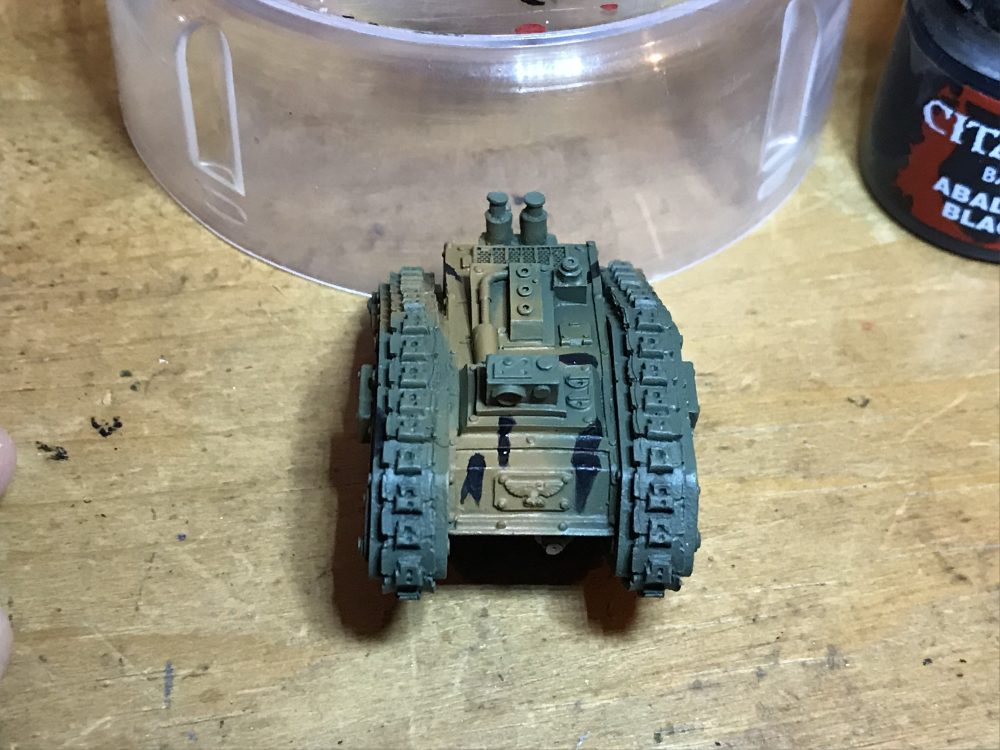 My Cadian vehicles are very clean. I haven’t put any effort into damaging them, weathering them or ageing them. And because I’ve set off on that route I’ll stick to that path. It’s also quicker to paint them clean.

But with the Catachans being a whole new force I thought it would be a good opportunity to try some of the above effects.

So I’ve tried the following on the Cyclops in this order; 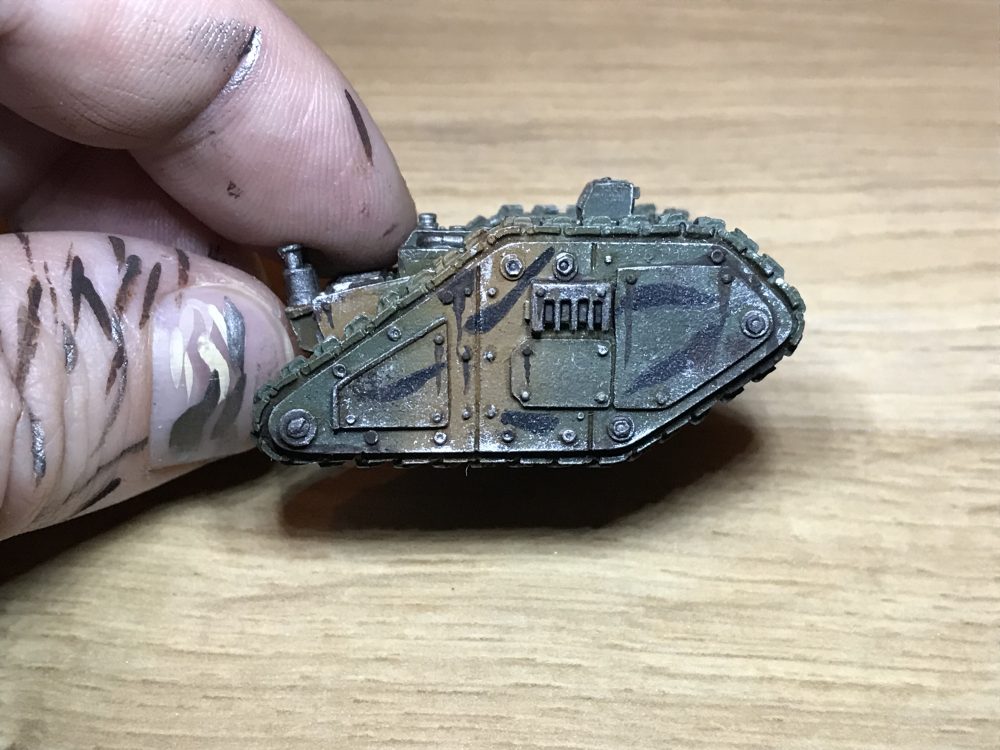 I’m partially heretic now, for using this paint on an Imperium vehicle. :-(

Out of all of those methods above, I think using Typhus Corrosion has to be the easiest and that which gives the best results. It’s a sort of brown water with bits of sand or grit in it. So it gives a fantastic textured finish. It contains a lot of colour, it’s not like a wash.

The amount of pigment in the paint means that when you do tiny thin lines you get a lot of residues left behind which is great for doing trickling lines of grim down armour from bolts, rivets and recesses.

The three lenses on the front are very small. There are two on the top and one underneath. I think they’re lenses, they could be anything, to be honest.

I used the Soulstone and Spiritstone paints on these followed by a blob of ‘ardcoat. Because they are so small, especially the blue ones, you can just put a blob of paint on them, let it dry and then put a blob of ‘ardcoat on. It dries as a little blob which gives you a kind of real little lens! The best way to paint a lens is to create a real lens!

And that’s it, folks. You can get the Cyclops from Forgeworld. 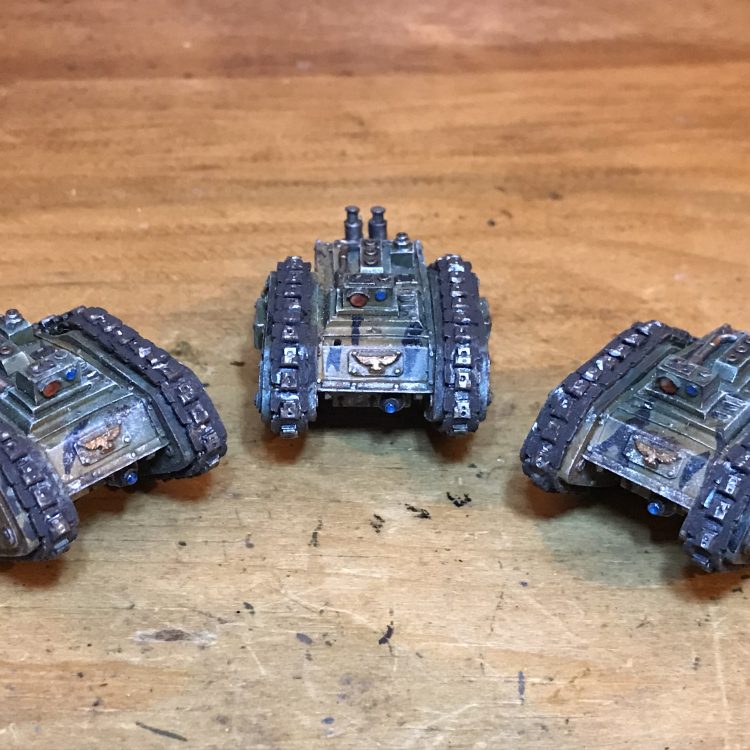 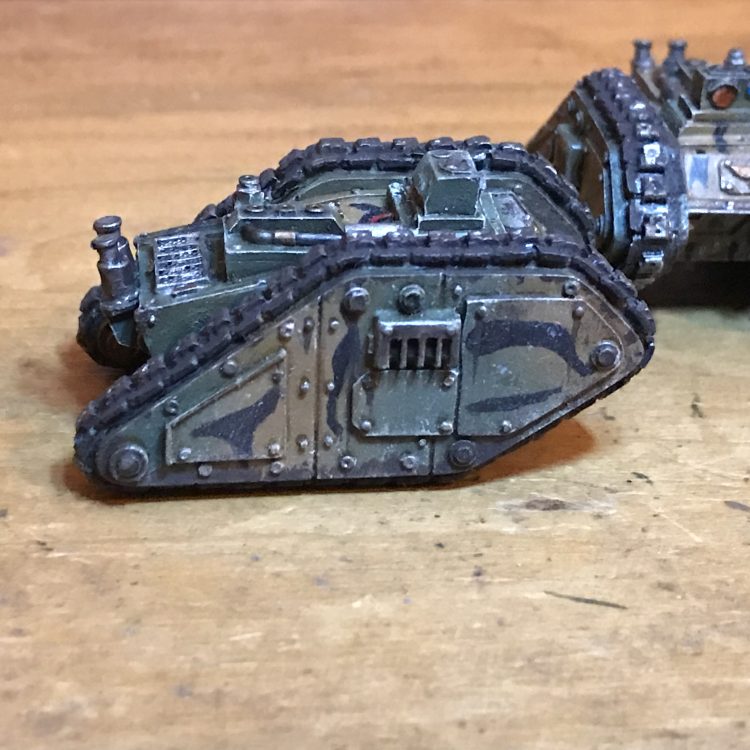 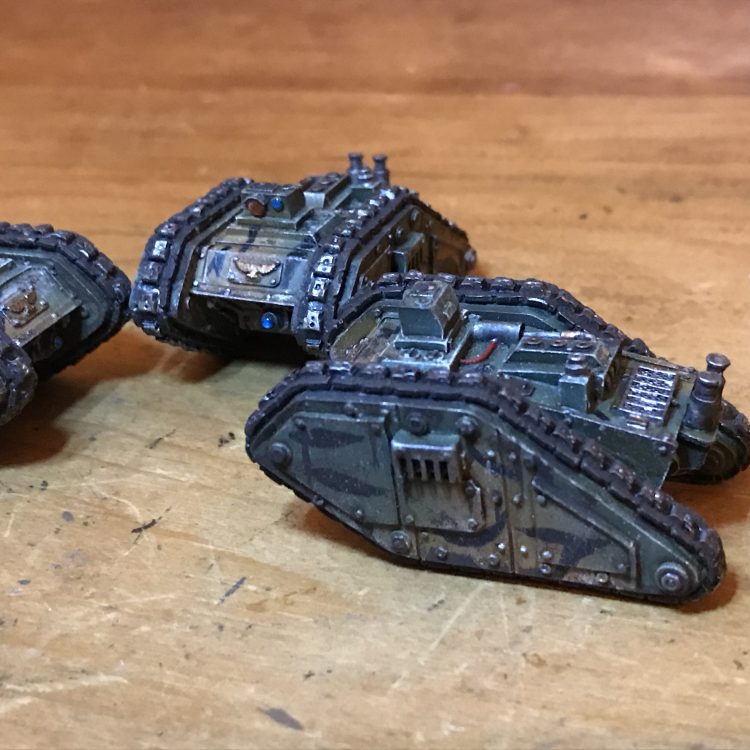 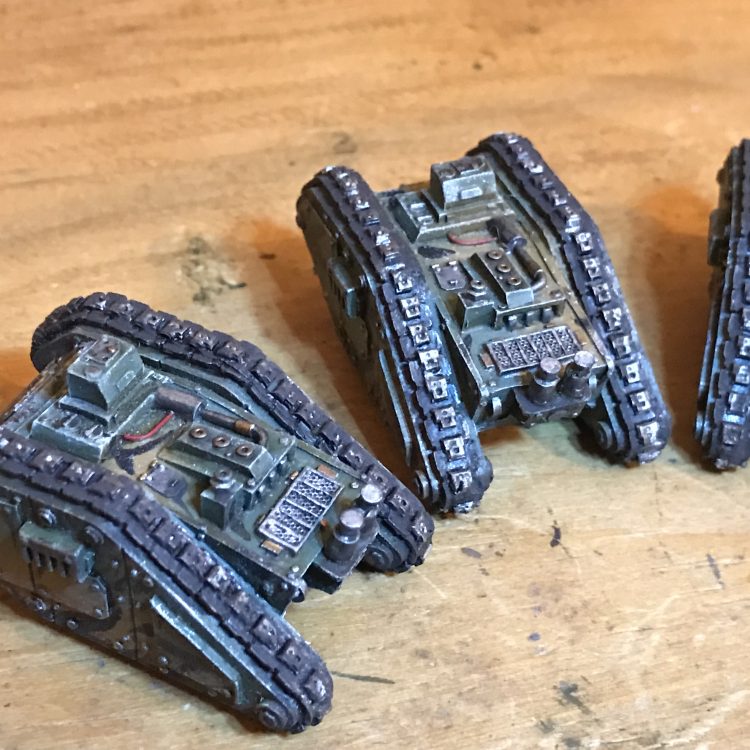 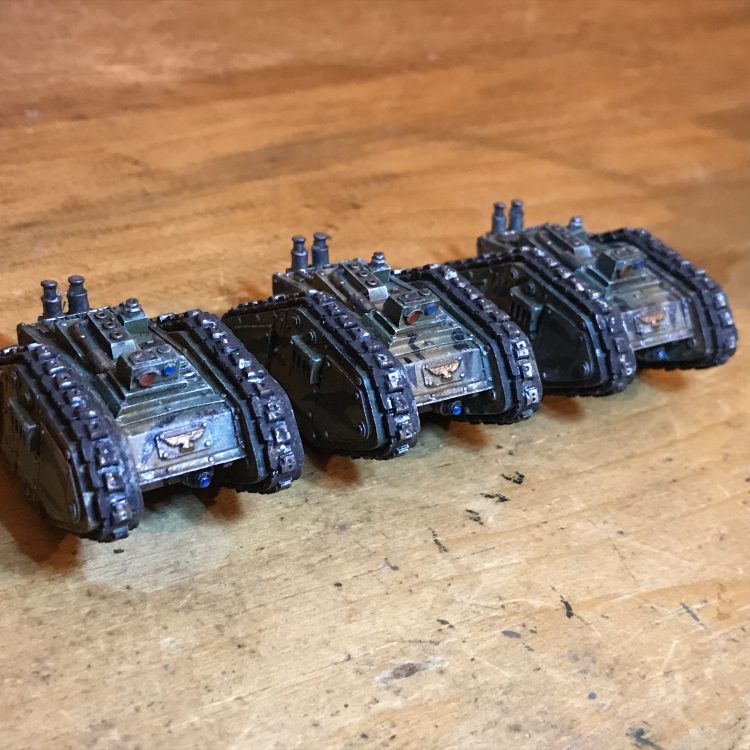 Bullgryns vs Ogryns – The Trade-Off Series