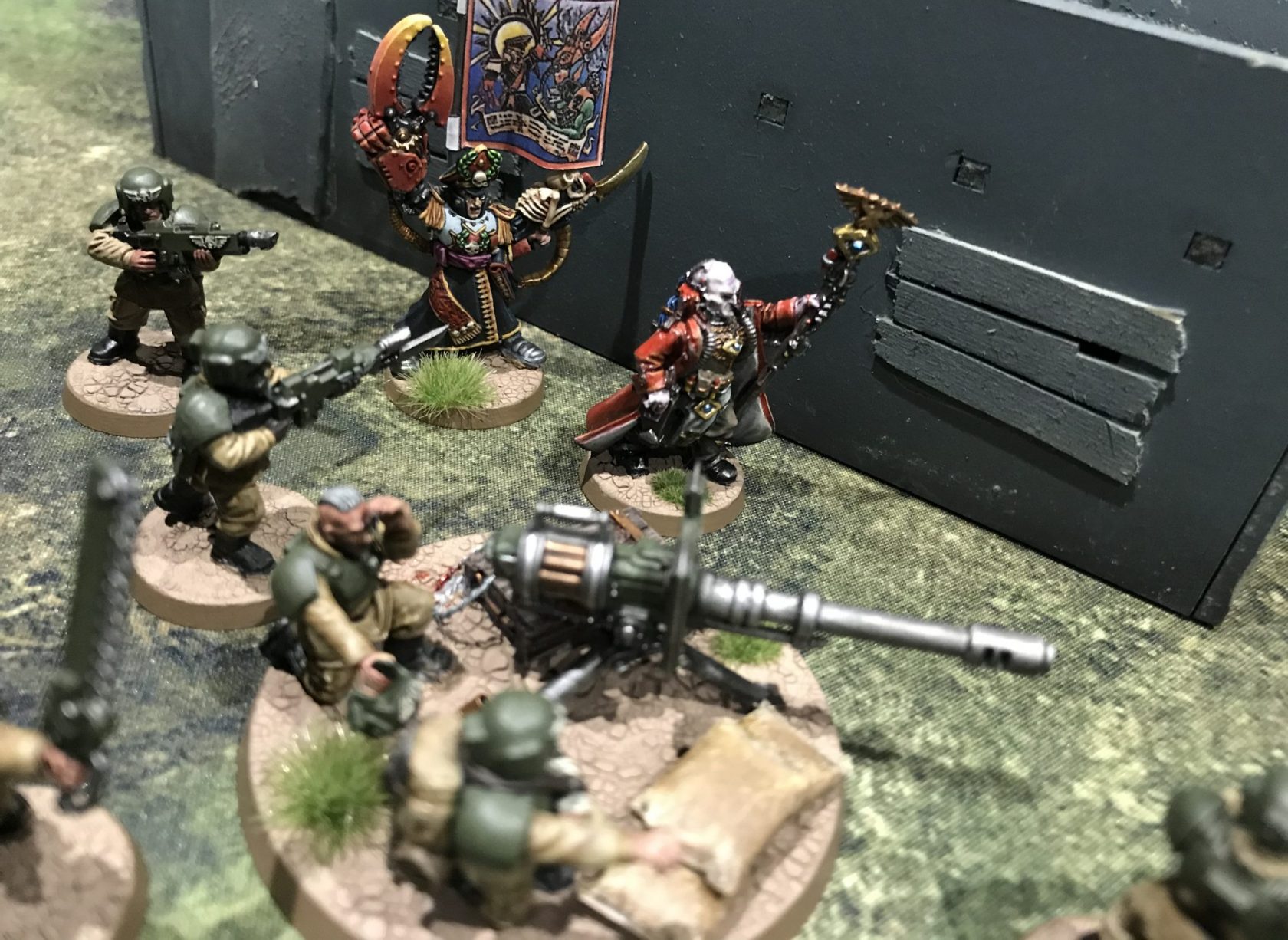 This is gonna get messy, quickly...

I have something a little different for you today. A 1v1v1 40K free for all. I was really excited about this after seeing this Wellspring Mission post by prominusiv.

We played 1,000 points per side on a 6×4 board with jungle terrain from Go To Ground Wargaming.

Various Primaris Marines, including Intercessors, Inceptors and then some Bikes too. The Warlord was a Chaplin.

There were some Tactical Marines too that came in via a Drop Pod with the Chaplin and a Librarian.

The mission you can see here.

It pits three forces against each other, with VPs capped per enemy. This is to try and stop players ganging up on one enemy presumably.

For example, you can get 1VP per turn per enemy for killing an enemy unit. So there is little point killing three enemy units per turn from the same enemy.

There are 7 objectives. You get no VPs for holding your own. But you do get VPs from holding enemy objectives and the centre objective. 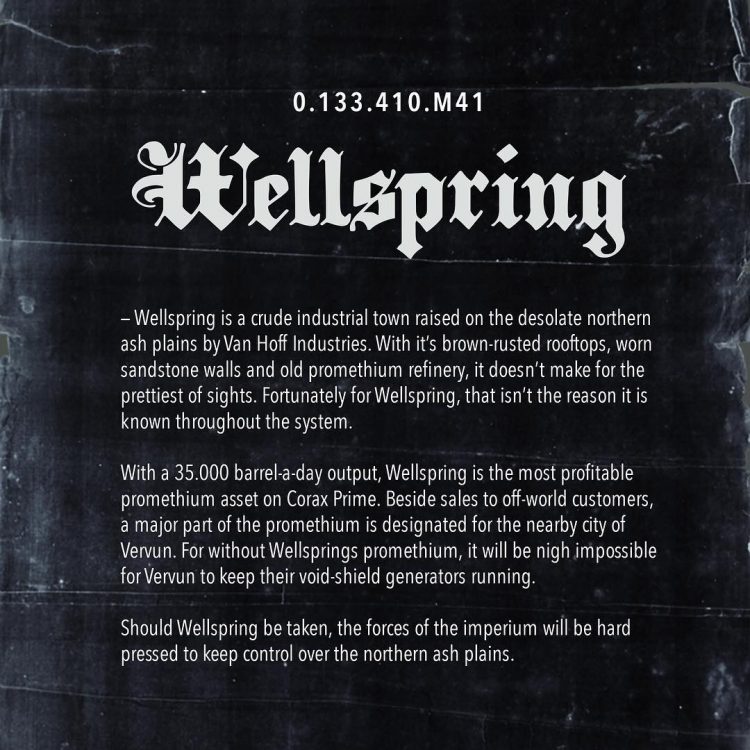 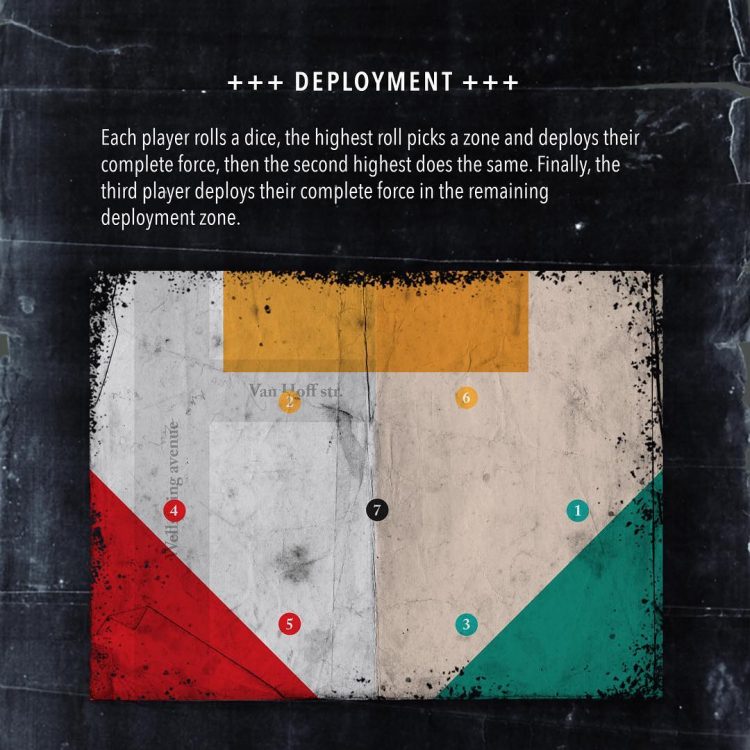 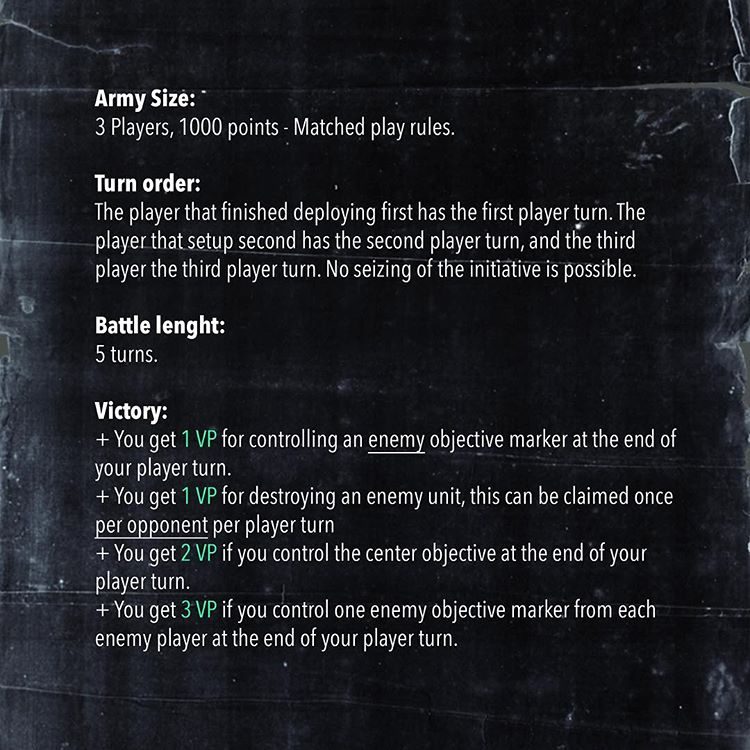 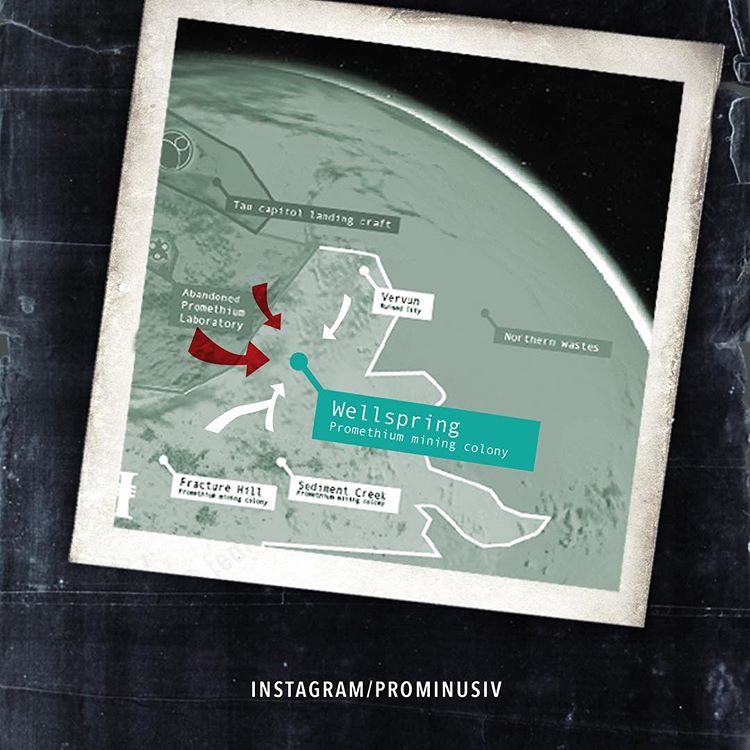 The Dark Angels won the roll and deployed everything first. Except for the Drop Pod and Terminators – who would arrive turn 2.

I went second with my Astra Militarum and Raven Guard. Leaving all of the later in Deep Strike with their Jump Packs. 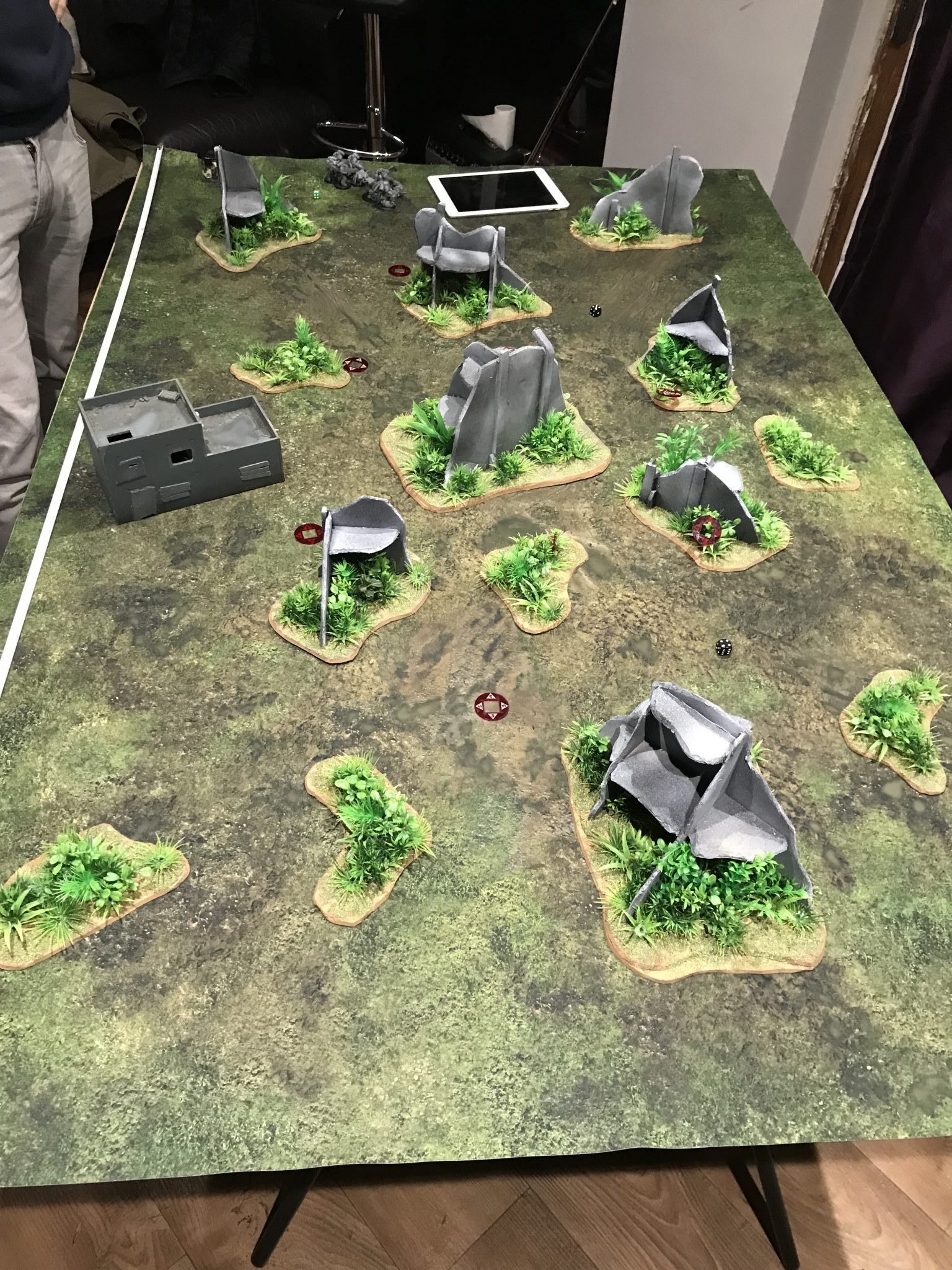 The battlefield – 40K Free For All

I don’t have a complete break down for each turn because it was so complex and hard to follow. But it went something like this…

The Dark Angels went for the objective in the centre straight away by Advancing the Inceptors right up and onto the objective. He focused down my Ratlings – killing a squad.

With just my Guardsmen on the battlefield at the moment, there wasn’t much I could do. I shot up some the Dark Angel Bikes a little, I couldn’t get to the centre objective. I did get onto an Eldar objective.

The Eldar struggled, like me, to make it into the centre. They didn’t take any enemy objectives but did finish off a squad of Guardsmen. 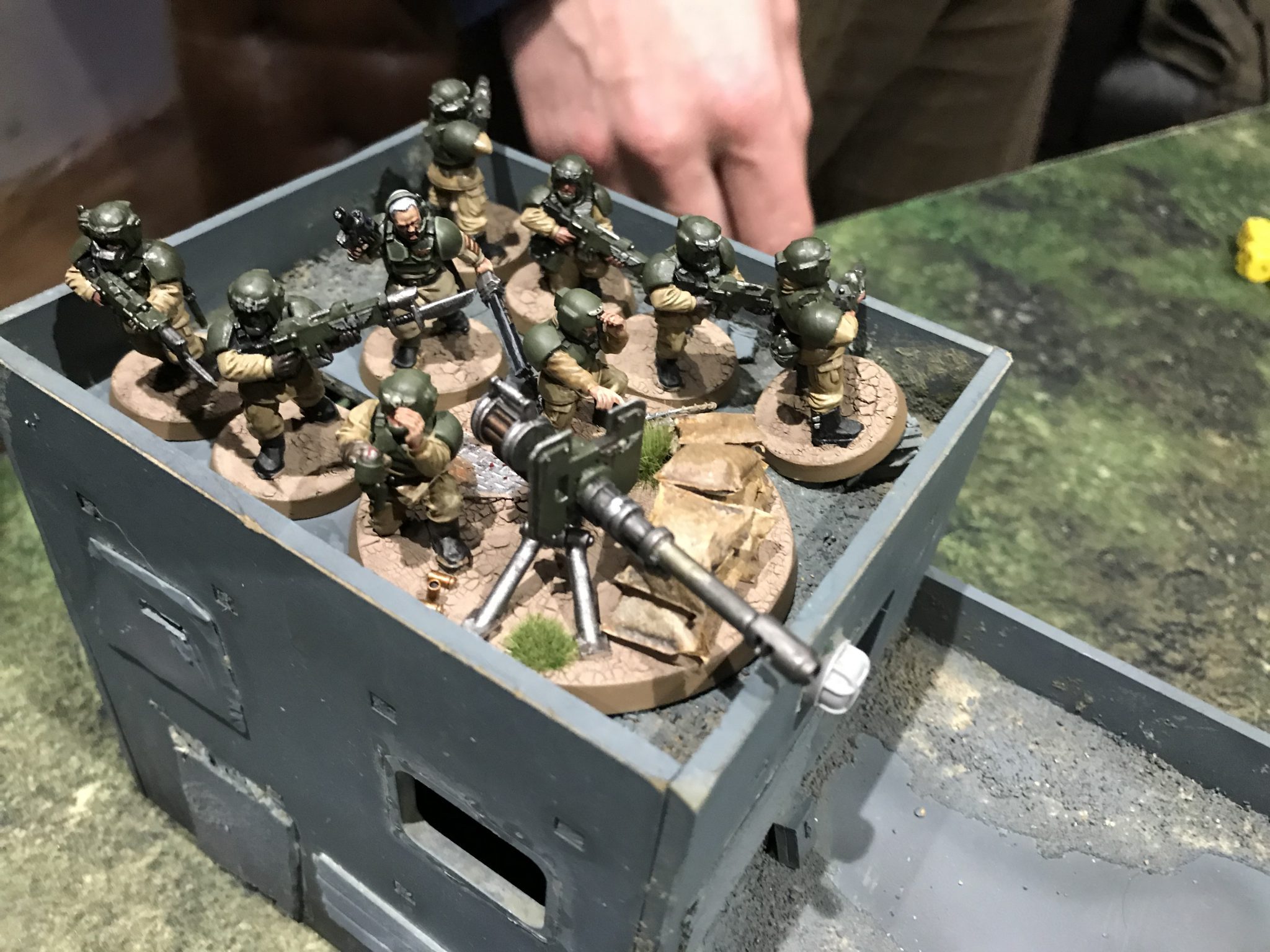 Guardsmen ready to be killed – 40K Free For All

The Dark Angels Drop Pod arrived and Tactical Marines swarmed onto the centre objective and the Chaplin moves towards Yarrick. The Bikes charged my remaining Ratlings squad who survived, then failed Morale and left.

The Raven Guard arrived! Only the Lightning Claw Squad failed their charge. A squad made it into the centre and took the objective from the Inceptors while killing a few Tactical Marines. Enough to take the objective. My Guardsmen didn’t do much. Yarrick and my Primaris Psyker charged the Bikes and killed one. Yarrick is always so disappointing. Shrike wiped out an entire Tactical Marine squad of five on his own!

The Eldar moved about a bit but didn’t get close to the centre. They killed off another squad of mine for another VP. 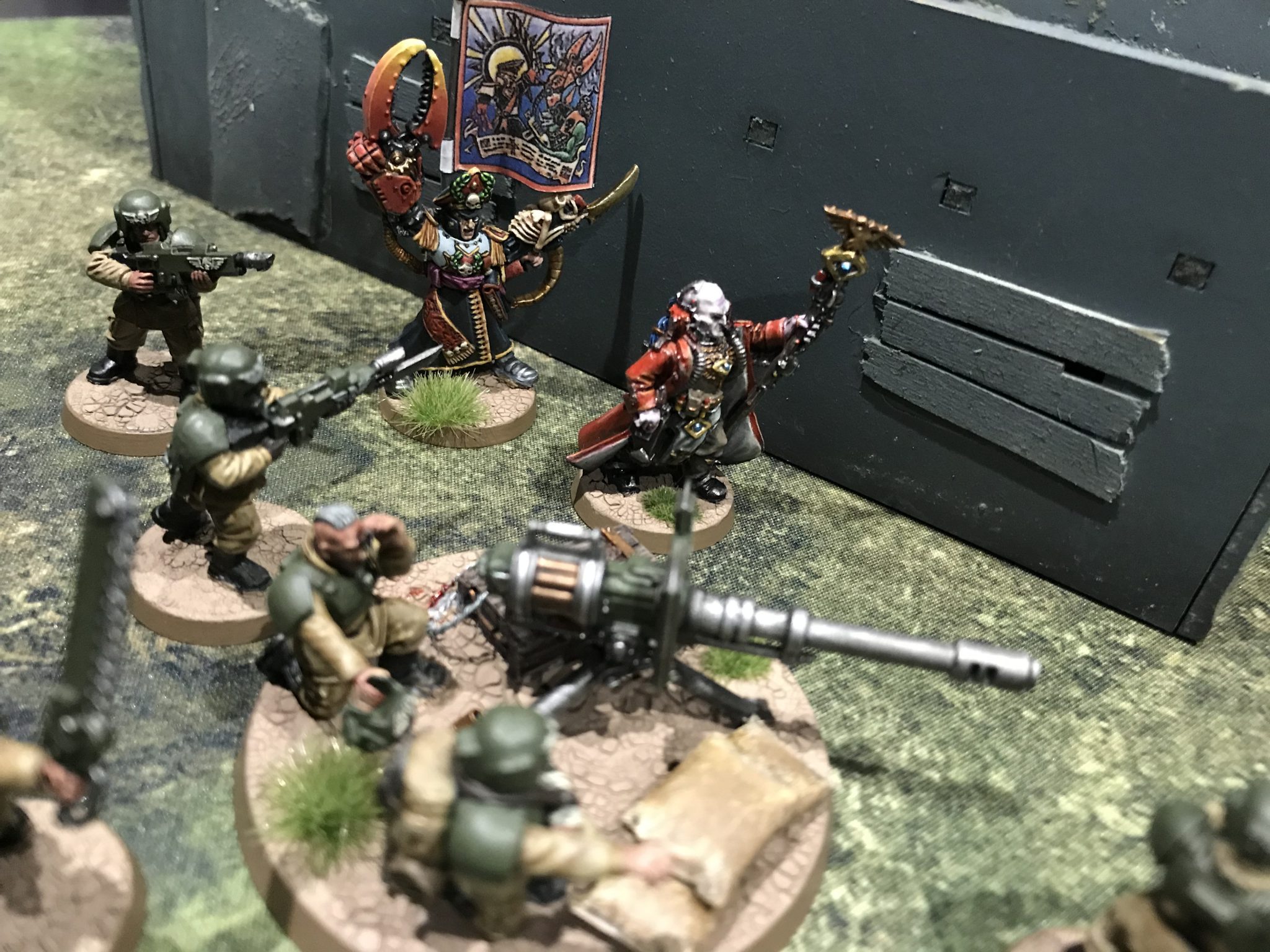 Yarrick! 40K Free For All

We were about ready to call the game done now.

The Dark Angels continued to take objectives all over the battlefield and destroy units to up their lead. Despite not having the centre any longer.

I stuck on the central objective with my Raven Guard which got me 3 more VPs. I’d managed to get some enemy objectives by this point too.

We called the game at this point as the Dark Angels were so far ahead and the Eldar player was so far behind. 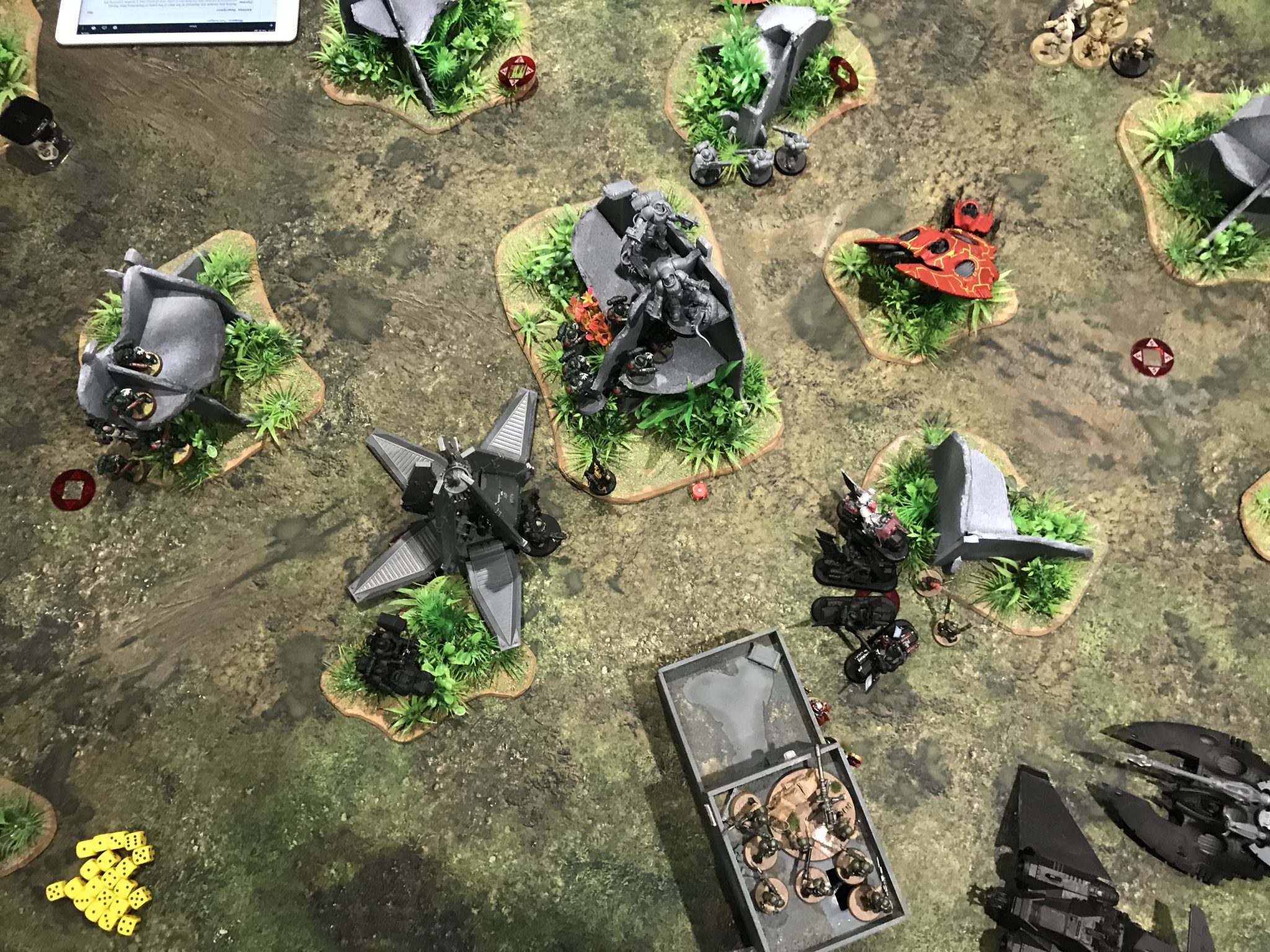 40K Free For All – Conclusion

I think there is a need to be some tweaks to the mission and we need to ensure some things are done during set up to make it more balanced.

Off the top of my head I think these will help;

I also think we should drop these;

This is because there are already a lot of VPs on offer via the objectives. And adding in these too makes things more complex and encourages players to kill more of an enemy – which could lead to one player being unfairly targeted.

I’d like to pursue this type of mission further and get something fair and solid worked out. My current group has three players so it seems like a worthy cause.

That’s all for now! 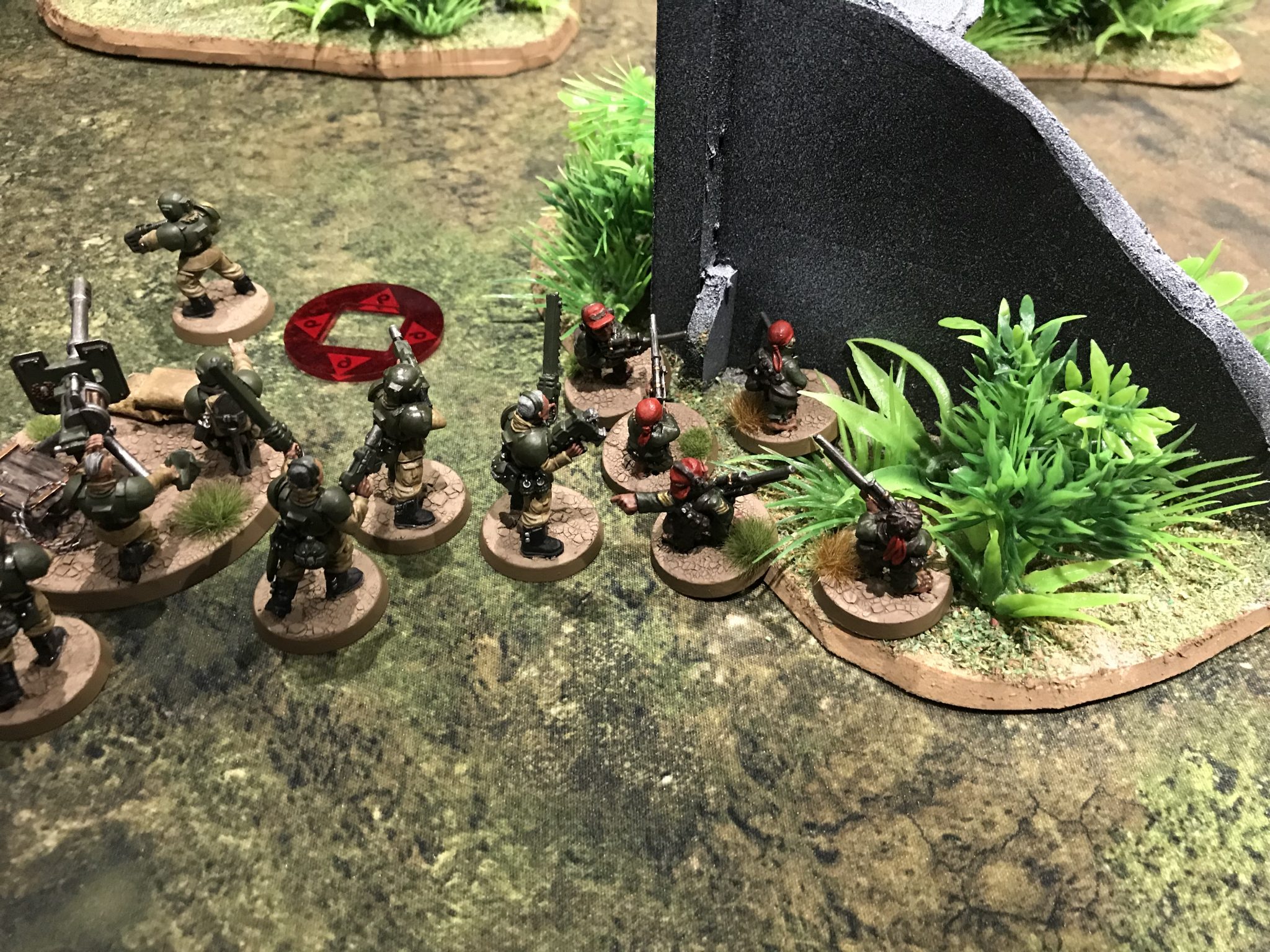 Ratlings and Guardsmen hold in the bushes – 40K Free For All