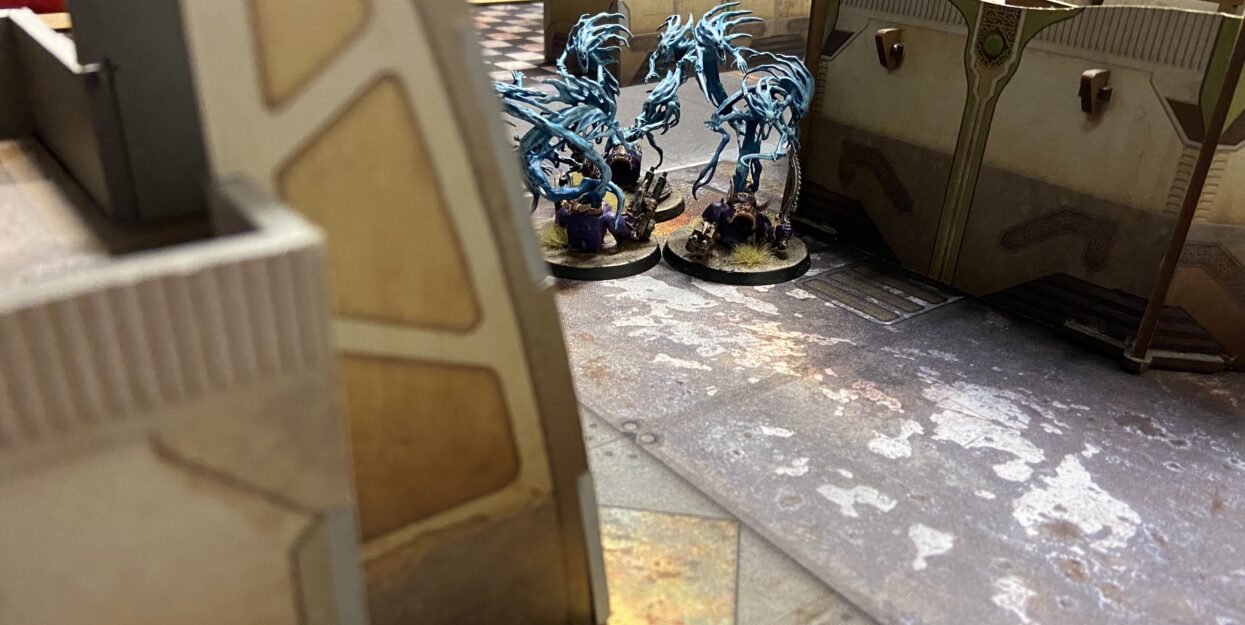 My first game ever against Thousand Sons!

This Cadians vs Thousand Sons game is for a league at Boards and Swords, but not this league I am in. This is for a 40-player league split into four divisions of ten players. The top players of each division will play off for a final winner sometime in Feb/March next year. There are ten players in a division, you play everyone once, and there is one game per month. So my games will be completed nine months from June.

Here are the current standings before this game… 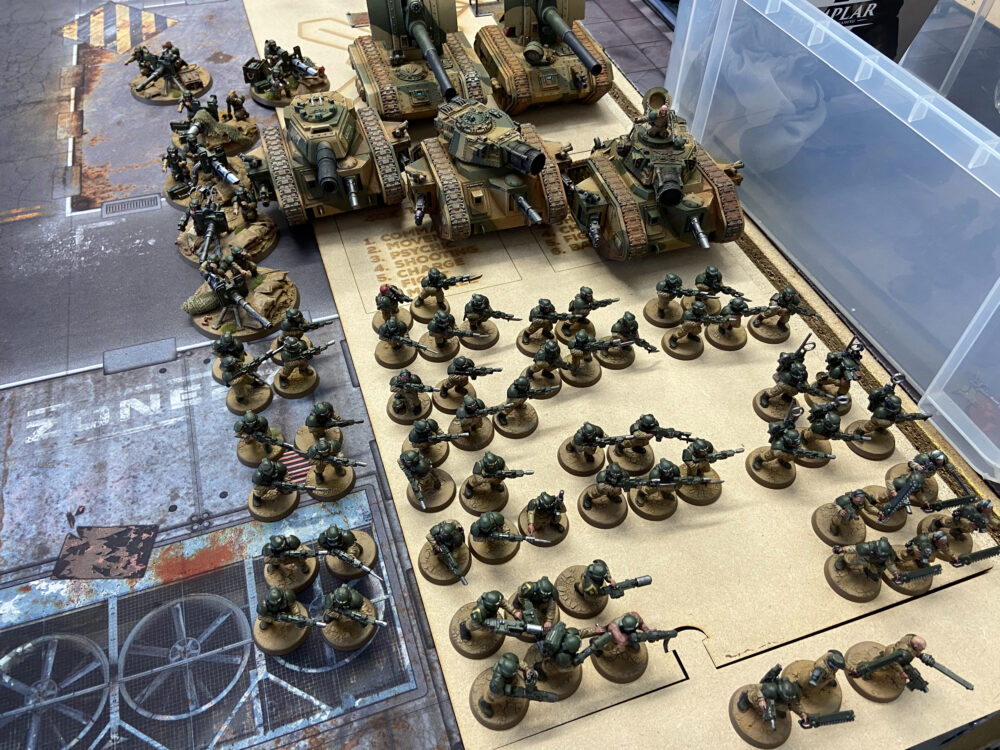 This game was using the new Nephilim GT Book. 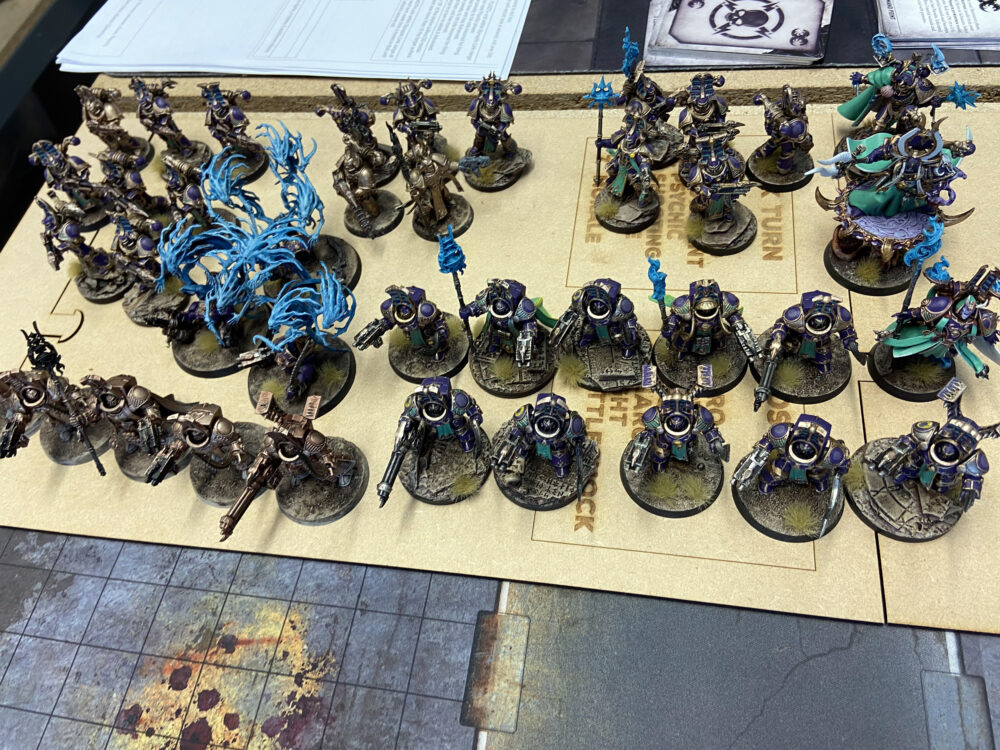 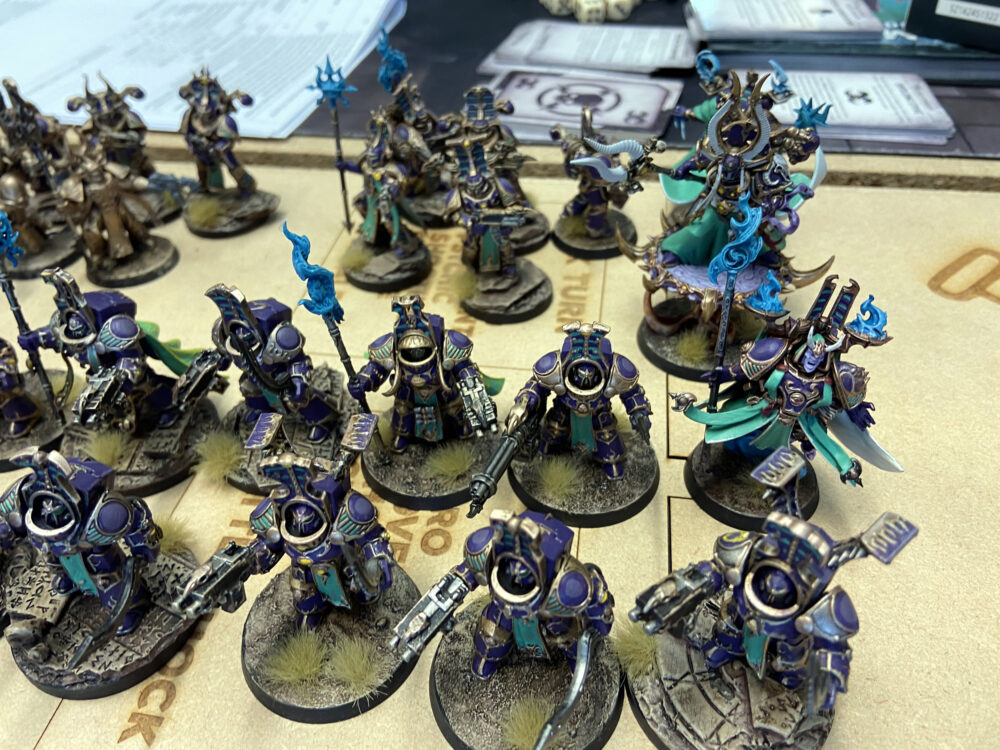 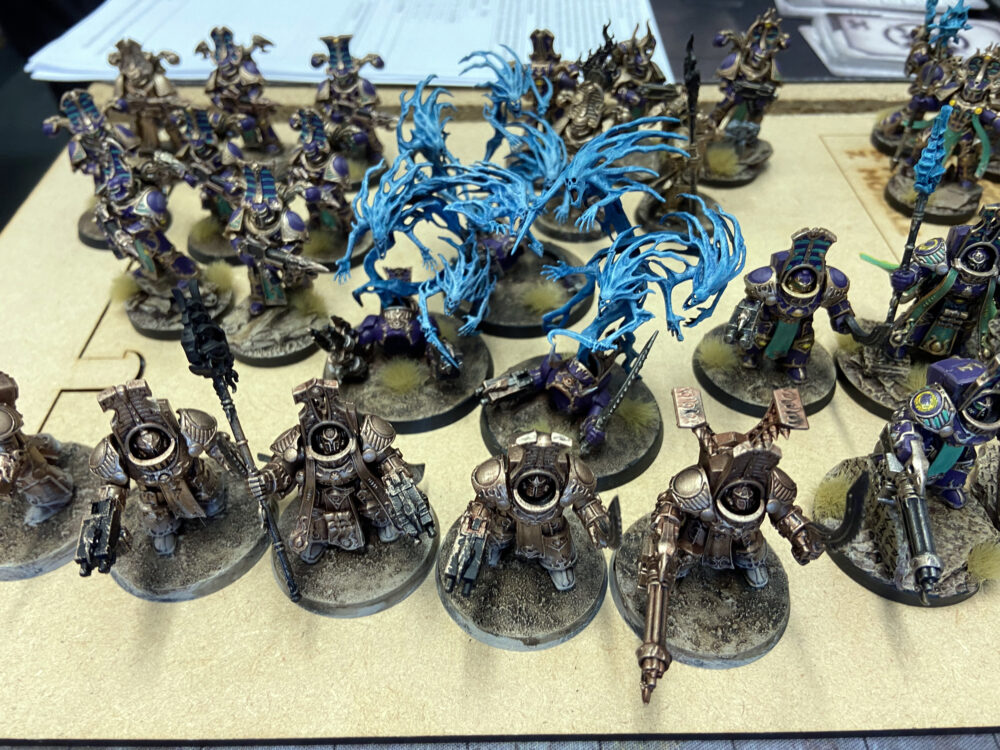 This is from memory so might be slightly incorrect;

Objectives are sticky, too, with ObSec units. Once you take an Objective with an ObSec unit, it is yours even if you leave that Objective. That is until the enemy takes it.

This mission uses an action on your home Objective, when completed you score VP equal to the number of Objectives you hold in No Man’s land. Up to a max of 3VP. 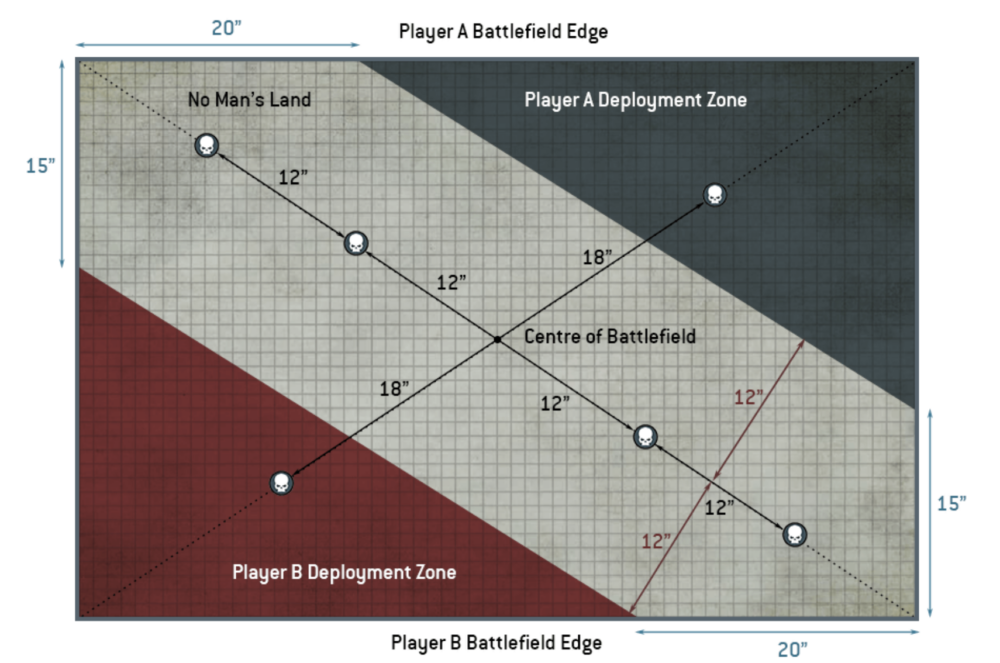 I was packed in to get the most out of that 12″ on the Relic of Lost Cadia. Basilisks were at the back, of course.

I had screened off my front line with my six squads as the Thousand Sons all knew a teleport power, and there was a character that had a one-use teleport Relic.

I knew that at least one unit a turn would be teleporting and then another at some point from that Relic. 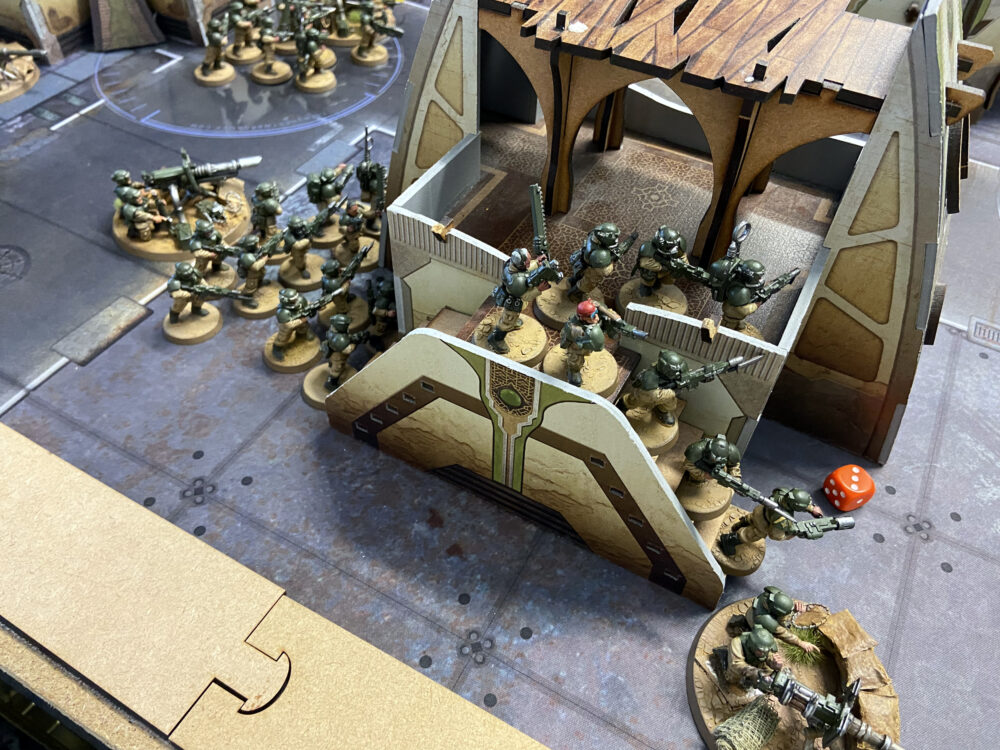 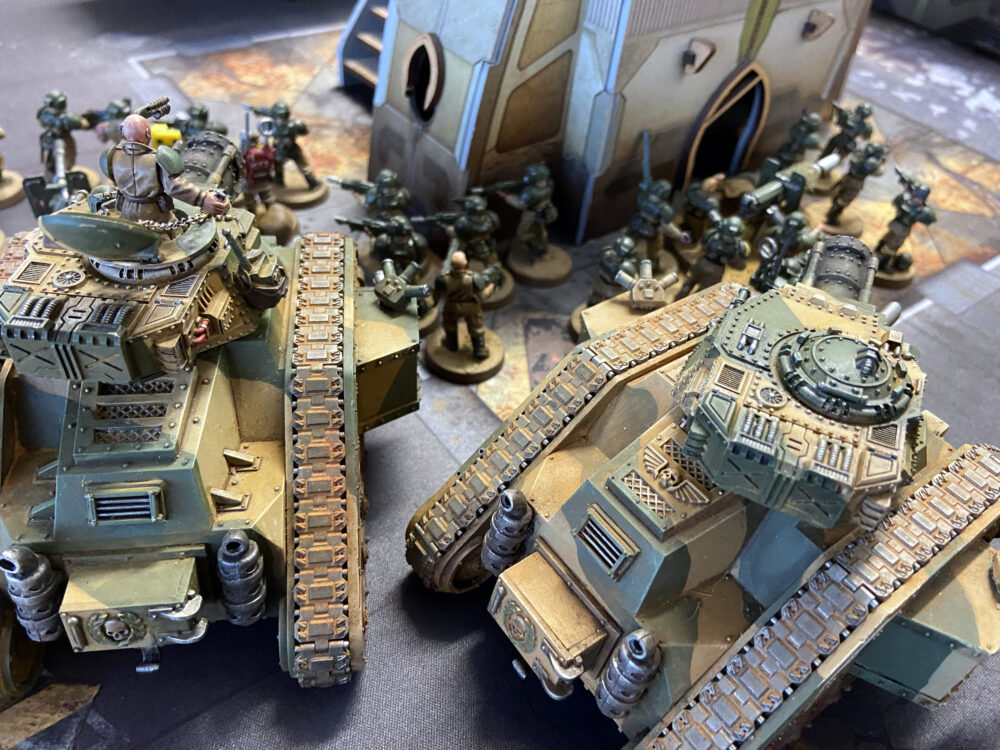 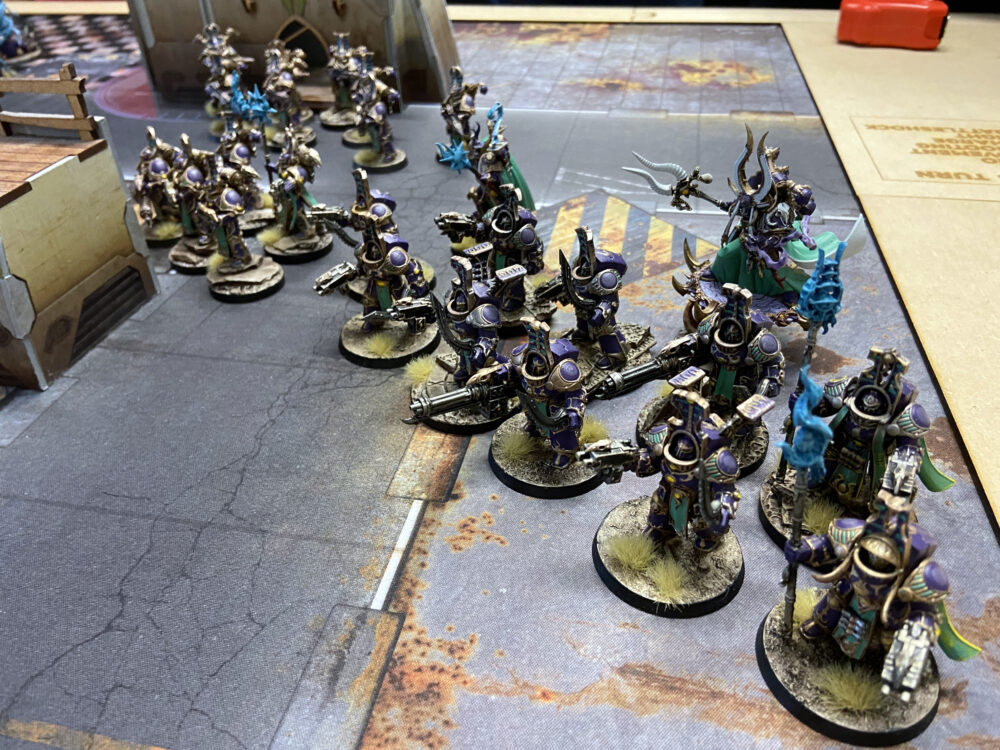 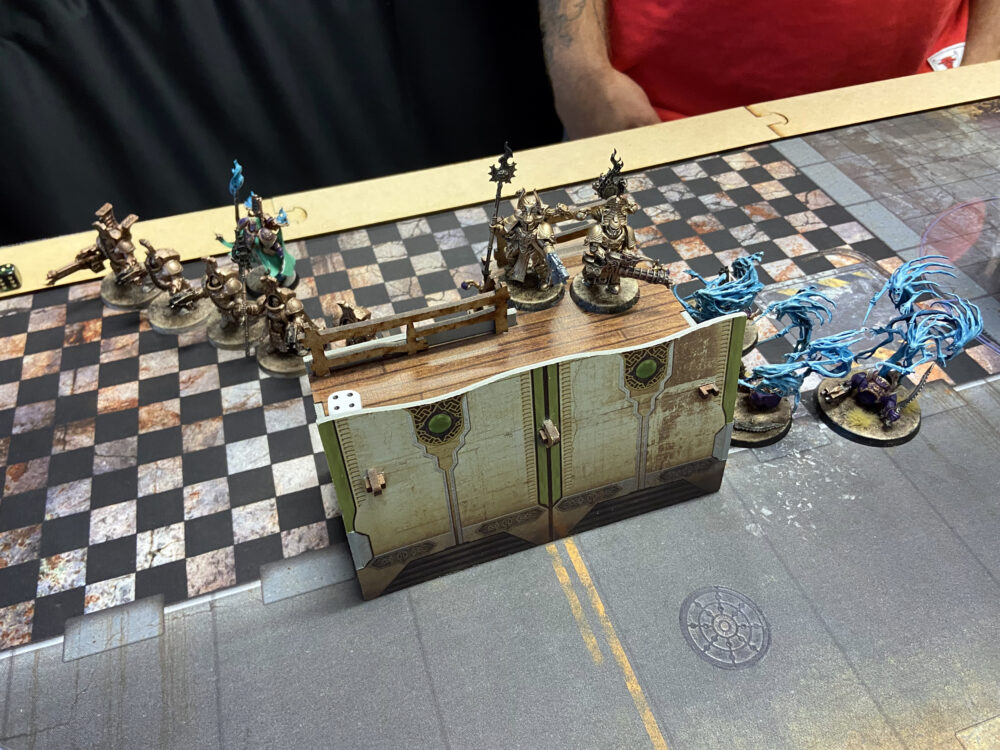 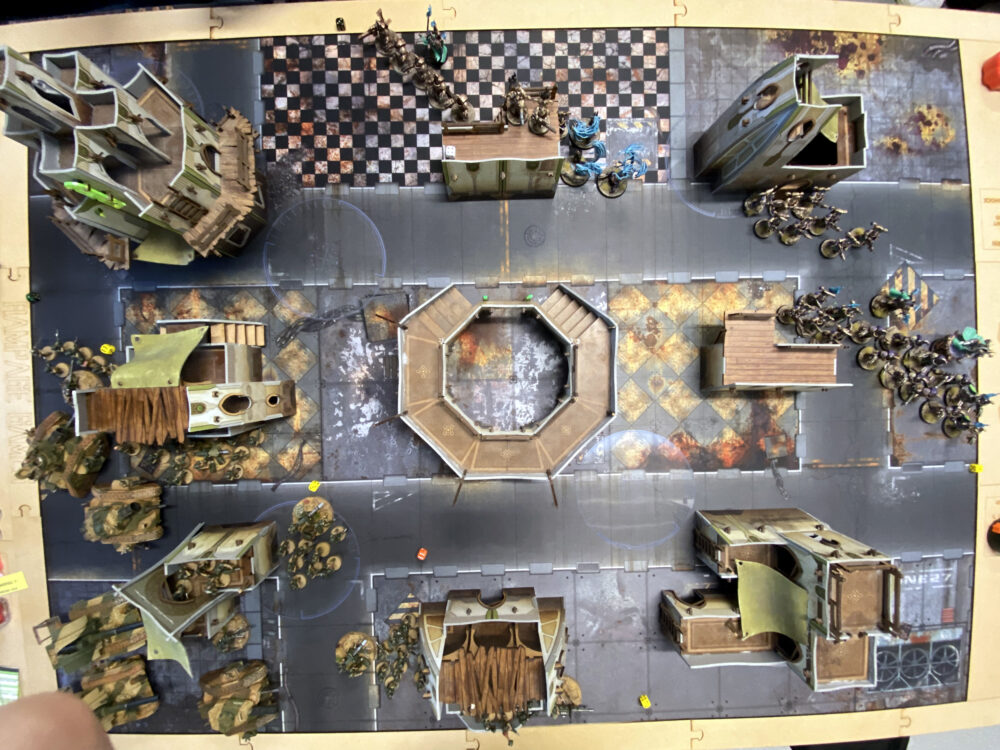 The smaller unit of Terminators teleported forward to my left flank. And a unit of Rubric Marines did the same using the one use Relic teleport. The Chaos Spawn moves up behind the central building.

The big unit of Terminators came forward and killed all but two of an Infantry Squad.

The smaller unit of Terminators then shredded all but one of another squad. I kept the Vox guy alive because with that, he still counts towards Inflexible Command even if he starts running around the battlefield. And finally, the teleporting Rubric Marines killed a whole Infantry Squad with their flamers.

One Infantry Squad lost, and another two were heavily depleted. But no vehicle losses at all.

I popped off the Relic of Lost Cadia this turn. There wasn’t much movement other than shifting around the depleted Infantry Squads to be out of sight.

The Shooting Phase went really well.  The full re-rolls to hit and wound worked as they should. The Rubric Marines with Flamers were all killed by Pask. The unit of five Terminators right in front of my lines were killed by the other Demolisher, I think one survived, but the Gatekeeper Tank Commander picked it off with its Lascannon and Heavy Bolters.

The actual Gatekeeper killed all the five Rubric Marines that had moved forward with the big group of ten Terminators.

Going second meant they came to me and my firepower worked! Killing three units and denying the enemy Grind Them Down this turn. 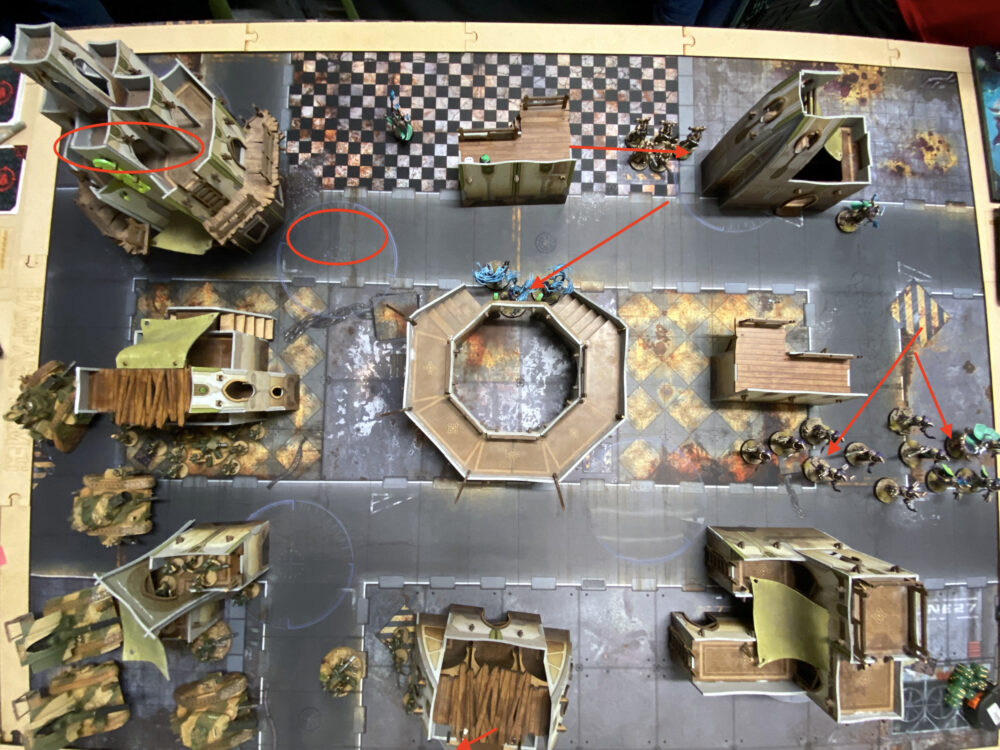 Because the Objectives are sticky, the Thousand Sons had managed to grab three, which was more than me. Good for the Primary.

With their frontline crumbling, the Thousand Sons move up again. To my surprise, the big unit of Terminators did not teleport and shuffled further to my right flank.  Instead, a character that was left on his own on my left teleports away and out of harm’s way to my right flank with the group of ten Terminators.

Pask takes three Wounds, but I come away relatively unscathed. 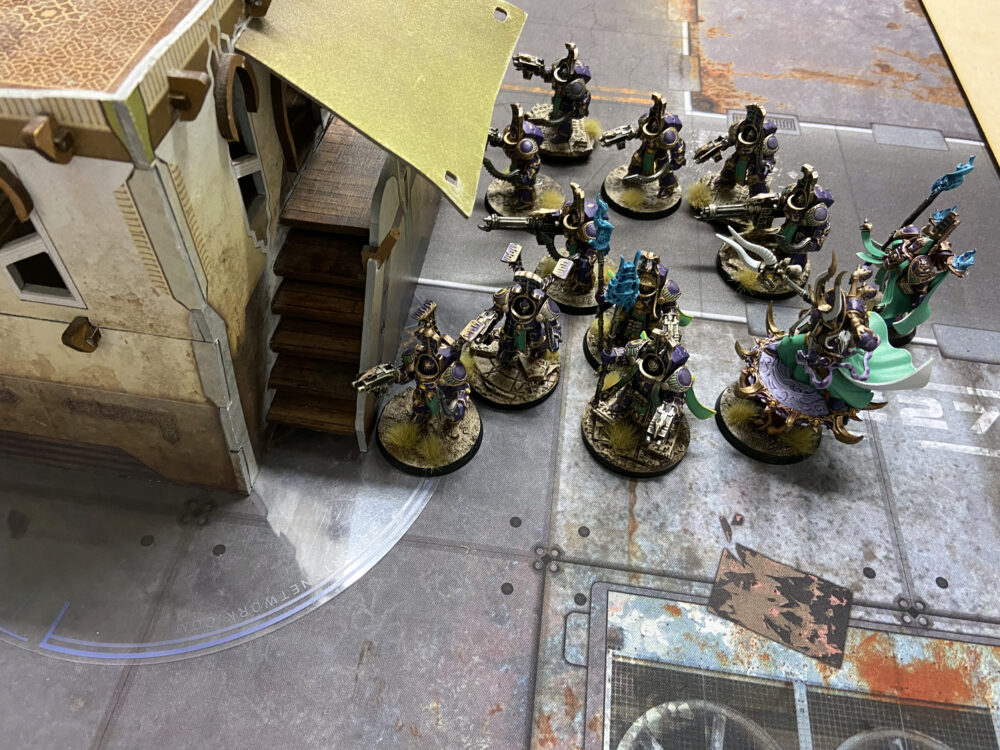 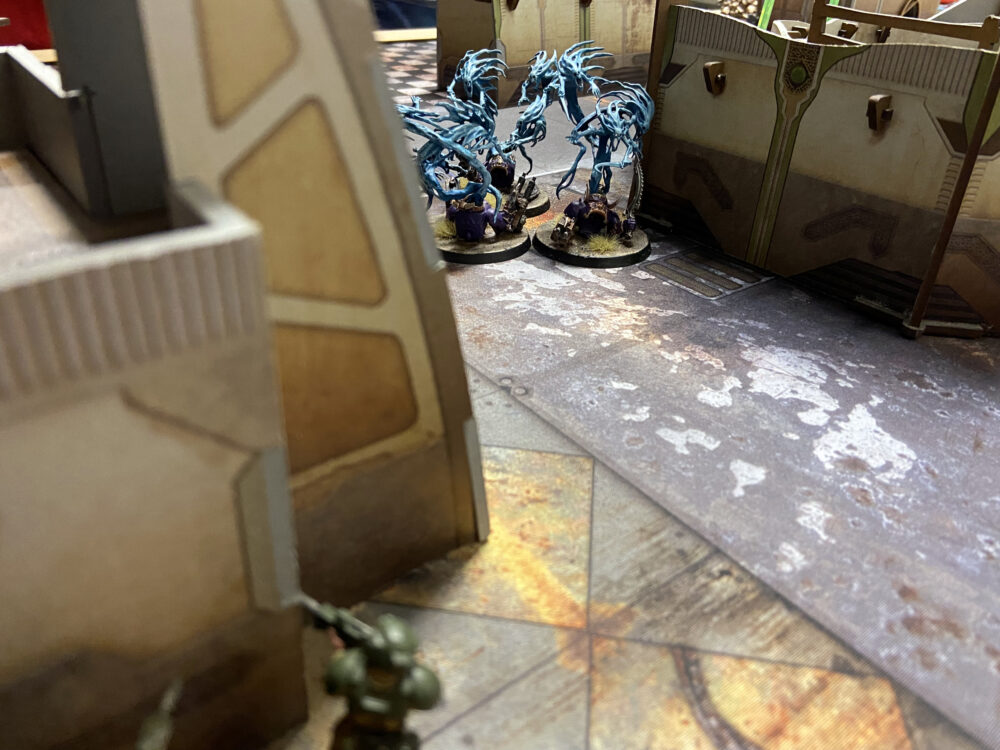 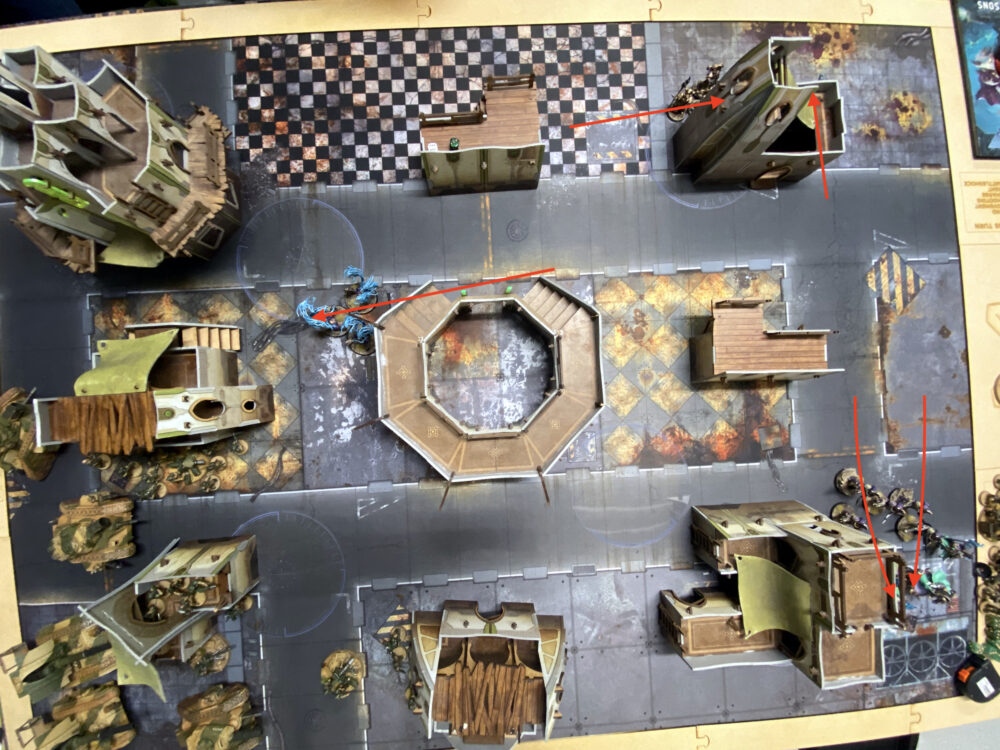 Without the Relic of Lost Cadia, my shooting was bound to be worse this turn. I moved up to start taking Objectives from the Thousand Sons. I was not spending CP like I usually do, I had started with fewer but I just did not need them in that first turn.

I did use one CP this turn to give a Platoon Commander an extra order so he could order his Command Squad forward and then himself forward, too, with Move, Move, Move. This got them onto an Objective while maintaining the 1″ with the Command Squad to extend the Inflexible Command bubble to 24″. This was that flanking move on my left flank.

The Chaos Spawn were wiped out, and I started to take long pot shots at the remaining Terminators with Lascannons.

There was a unit of Rubrics in the back right corner on the Thousand Son home Objective, which got removed this turn by the Basilisks. 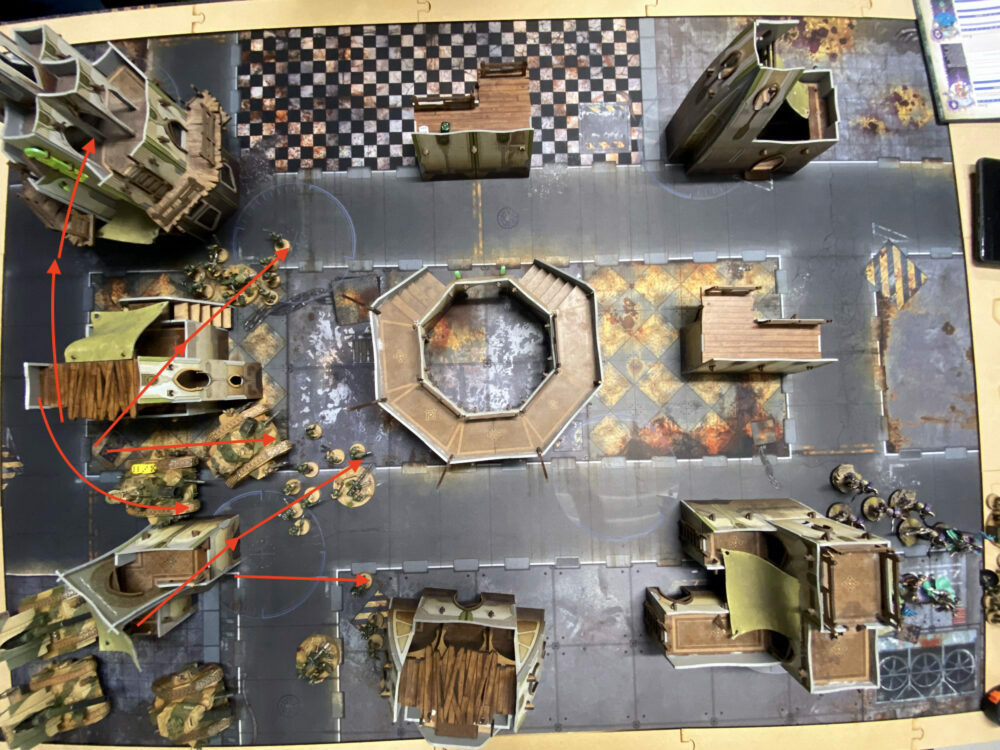 With my moves forward, I swung the Primary into my favour after taking Objectives off the Thousand Sons that they had got with ObSec units.

The Terminators teleports to my left flank, and Ahriman flew forward to another Objective. There was still a character in that top right corner on the home Objective of the enemy.

I lost a few Guardsmen from bolter fire and Mortal Wounds. The Demolisher Tank Commander was killed this turn, but Pask remained on seven Wounds after taking a few more this turn. 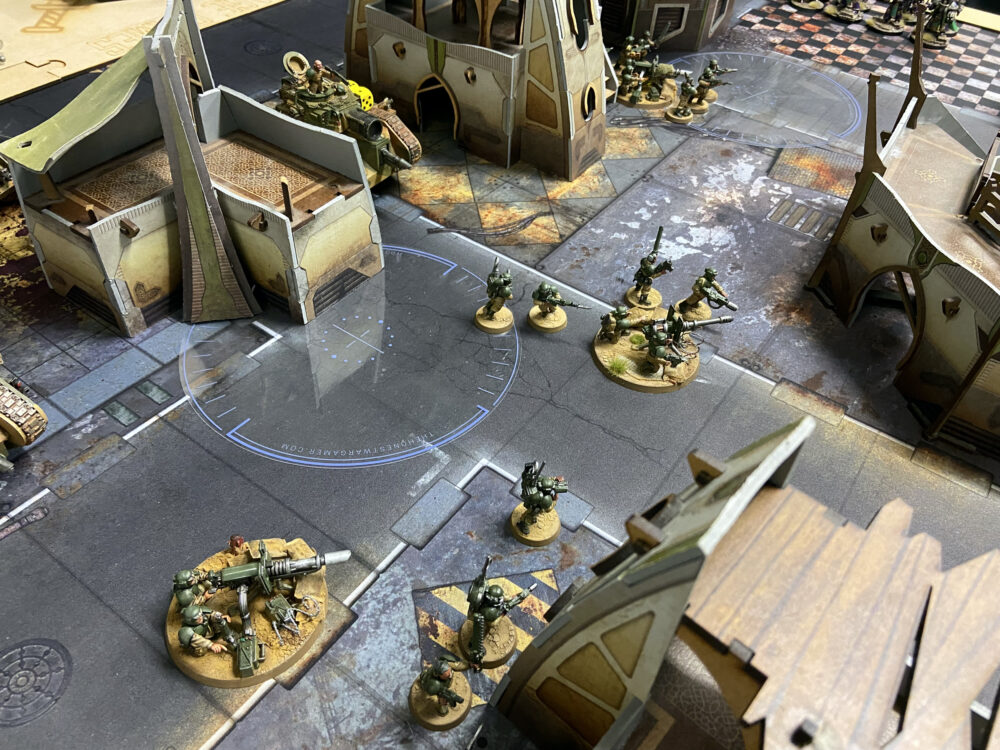 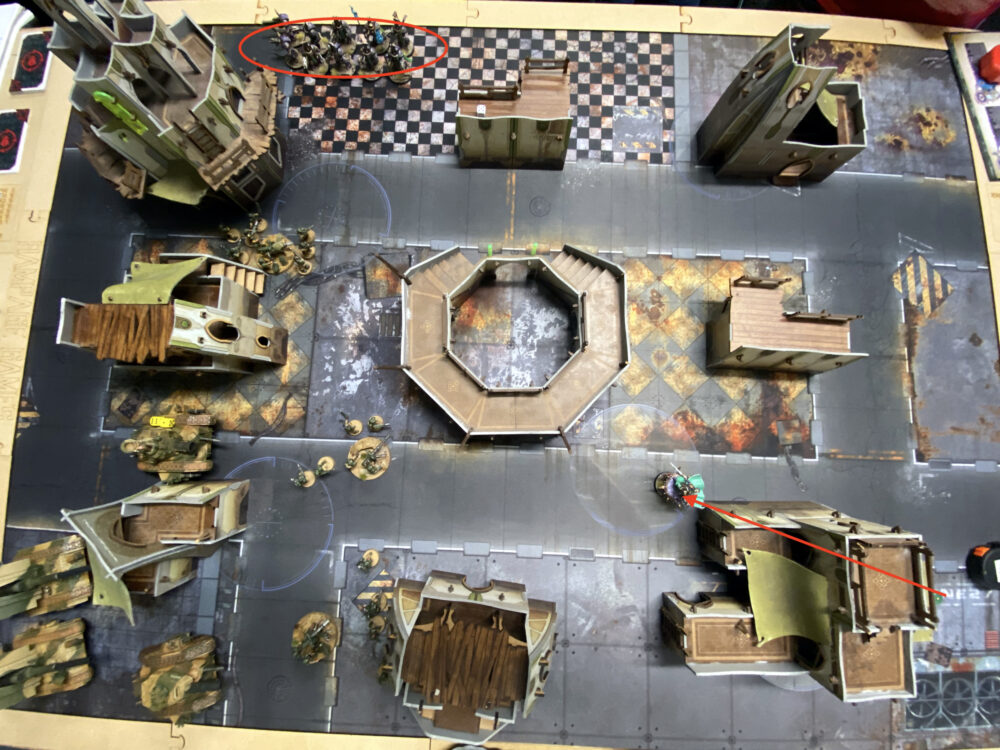 Guardsmen Move, Move, Moved this turn to get onto a new Objective. I still had, somehow, the Objective in front of the Terminators.

Between Pask and the Gatekeeper, I was able to kill seven of the ten Terminators. The Gatekeeper also used his Lascannon and two Heavy Bolters to deal the exact number of wounds needed to kill Ahriman! 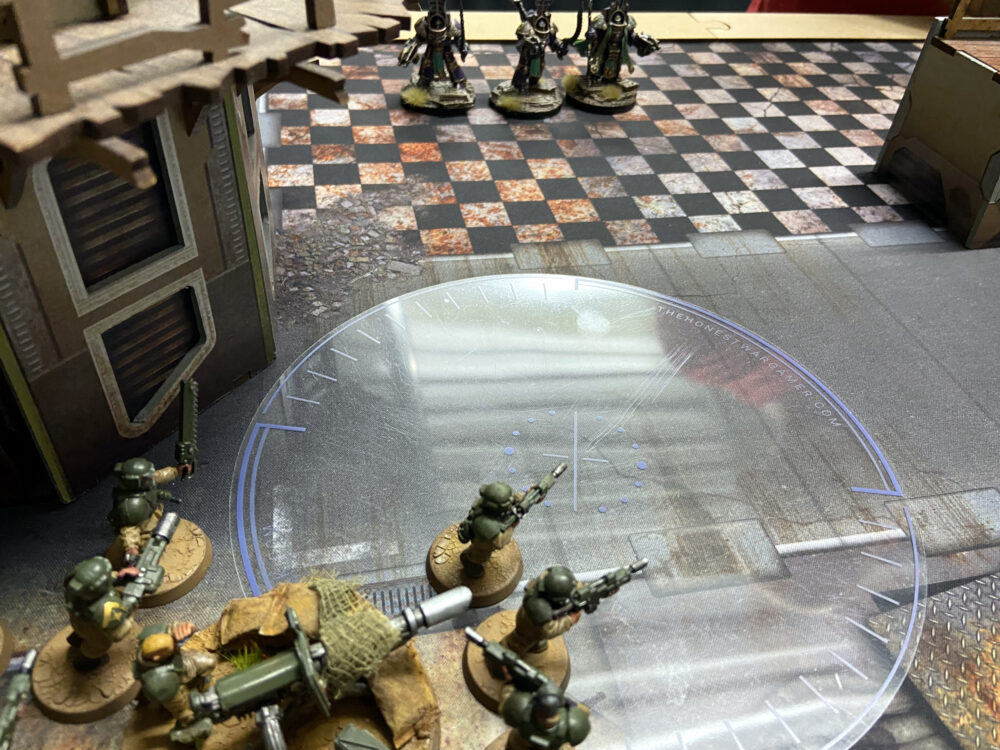 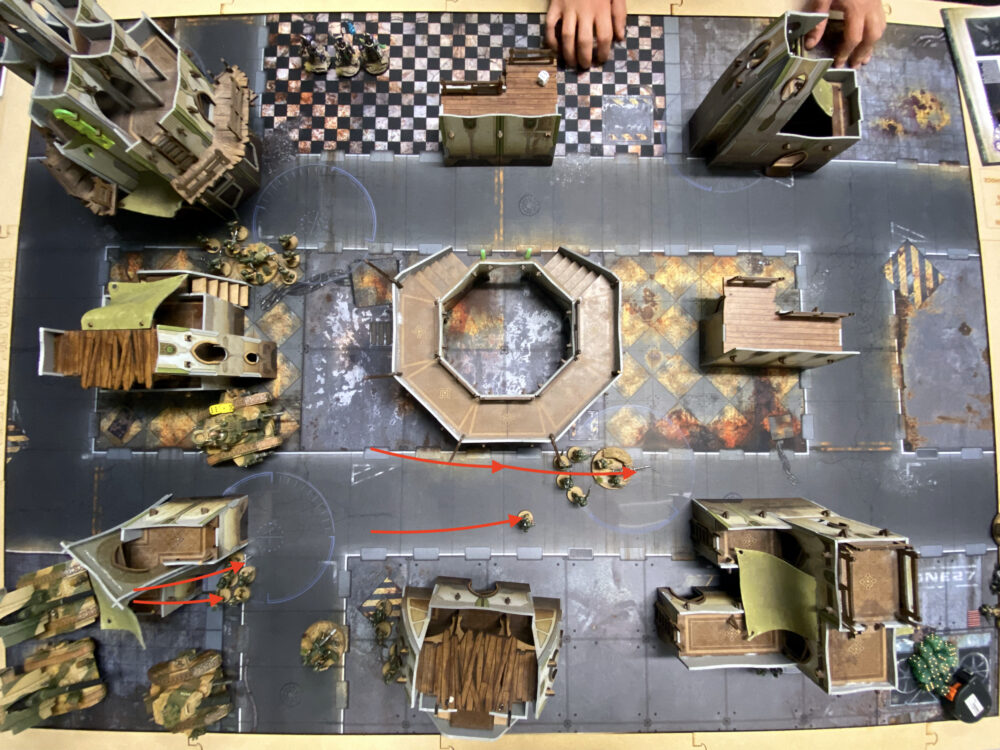 The Thousand Sons were tabled on turn four after the Basilisks were able to mop up the last characters and Pask and the Gatekeeper killed the last Terminators.

Well, I am stunned. I cannot believe that this game played out how I did. Big shout out to Perry for being a great opponent and sportsman.

The Relic of Lost Cadia made all the difference in that first turn. The new Guard Secondaries are good too, but you have to build your list around them to ensure you can achieve them.

Despite the Tank Commanders and Pask doing the lion’s share of damage in the battle, I was surprised at the Basilisks. I had all but given up on them and Manticores with their random shots of awfulness. But the Basilisks did well and managed to disrupt the enemy by removing Troops from the backfield and bombing exposed characters without mercy. The 2D6 pick the highest came out well, and when targeting units of five Marines, it worked well. 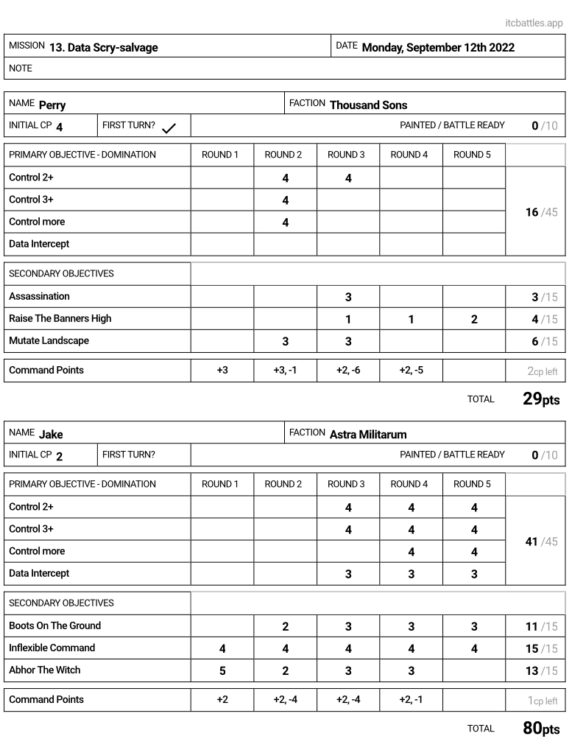