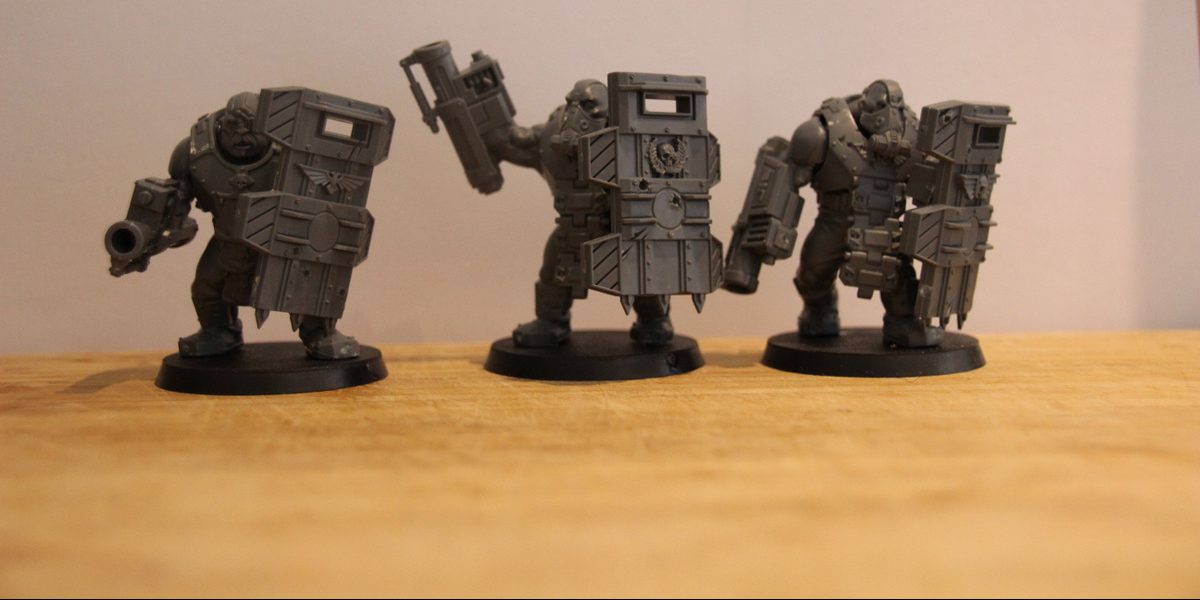 Bullgryns vs Ogryns – The Trade-Off Series

It was suggested via the new chat feature on this blog that I should consider doing some sort of Trade-Off Series. My Cadian Snipers vs Ratlings article is of this style.  And so here we are. For my first article, we will look at Bullgryns vs Ogryns.

I think I have six of each. I think, I forget.

Bullgryns and Ogryns have the same stats – nearly. So they both hit on a 3+ in combat and hit on a 4+ when shooting. They are both T5, S5, 3 Attacks and 3 Wounds.

The only difference stat wise is the save. Bullgryns get a 4+ and Ogryns get a 5+.

Bullgryns are your melee boys. Bullgryns can be equipped with either a Bullgryn Maul or a Grenadier Gauntlet. So, in theory, they can be shooting too because the Grenadier Gauntlet is a shooting weapon that does D6 shots, S4, Damage 1 with a range of 12″.

So while it can shoot – this is fairly poor. With no AP and at S4 it’s good against horde armies and their squishy troops but for 45 points a model you want to be doing more than killing Guardsmen and Eldar Guardians.

So the Bullgryn Maul is the weapon of choice here. It means they have no shooting other than the 6″ ranged Frag Bomb – but it does mean they pack a real punch in melee. And don’t forget Avalanche of Muscle which gives +1 Attack on the charge.

The most notable difference between Bullgryns and Ogryns is their Save. The Bullgryn’s Save is better right away. And it is always boosted by one of the two shields they can take. A Bullgryn is much more survivable because of their excellent saves. 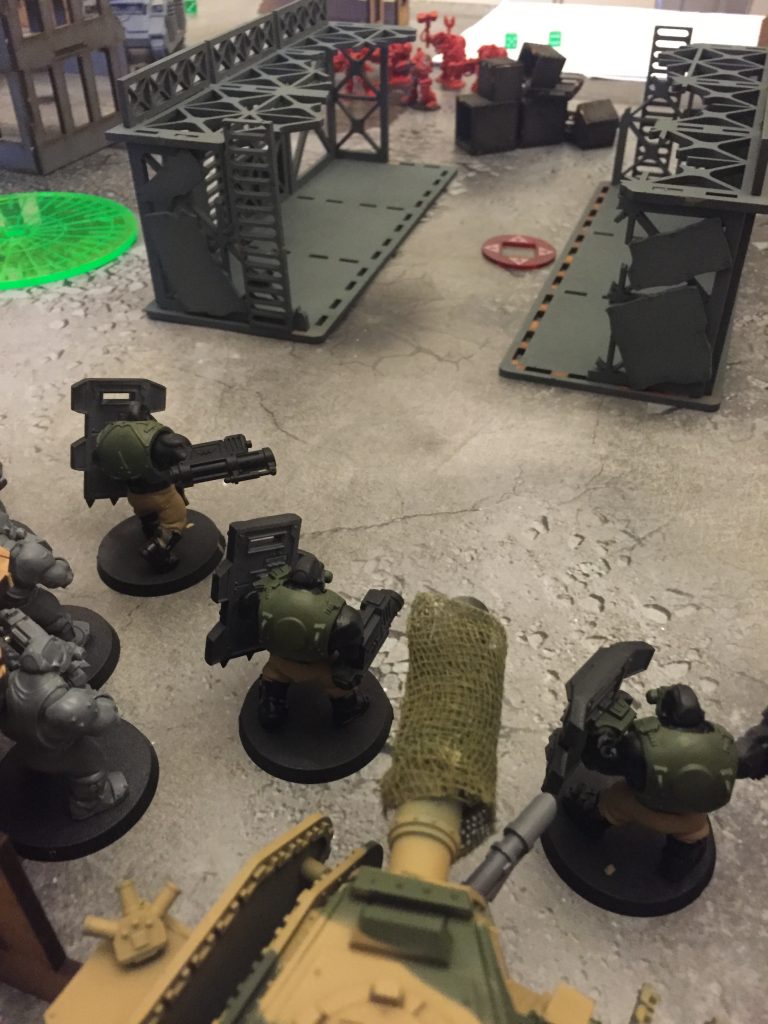 Ogryns are your shooting boys. They have no options and always come with a Ripper Gun and Frag Bombs. The Ripper Gun has the same range as the Grenadier Gauntlet, it has a guaranteed 3 shots and is S5.

The shooting from an Ogryn, whiles it’s no Baneblade, it is marginally better than a Bullgryn. But it is not spectacular and for 30 points a model you’ll maybe want more bang for the points.

Ogryns do however have a melee profile for their Ripper Gun. It’s not as good as the Bullgryn Maul as it is S5 with AP-1 and 1 Damage. 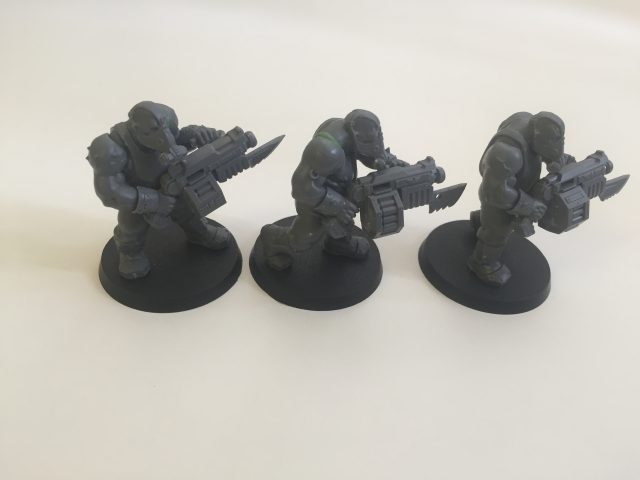 Both units are geared towards two different aspects of Warhammer 40K. One is melee and one is shooting.

For me, the Bullgryns are excellent at melee and if you want a melee unit in your Astra Militarum force then the Bullgryns is an auto-include.

The Ogryns do seem to be more geared towards shooting but they just aren’t that good at it.

According to MathHammer a unit of 3 will spit out 12 shots with 6 hits. Against basic infantry, like Guardsmen, 4 shots will Wound and then 1 should be saved via the enemy’s armour save. This results in 3 dead enemy models. For a unit worth 90 points you will struggle to get a decent return of dead enemy modes at this rate. This is only at 12″ range too, which is short. If we assume they make the charge these 3 dead enemy models go up by 4 or 5 models. Giving us a total of 7 or 8 dead enemy models. Assuming they are Guardsmen that is about 28 points worth of dead enemy. Not a lot.

If we apply the same to some Maul carrying Bullgryns with no shooting we can kill 7 Guardsmen type units from melee. Add in the Frag Bomb and this goes up to 8. And the Bullgryns have 2 Damage with the Maul so they can do some real damage to multi-wound models too. Plus, the Bullgryns have a decent save too.

The Ogryns have a 5+ save, the same as a Guardsmen, so Bolter or Heavy Bolter with any volume will cut them down easily. They have no shield to take either.

Bullgryns are the choice for me nearly every time when it comes to Bullgryns vs Ogryns. That is not to say never bring Ogryns, I am sure they have their moments and just writing this makes me want to bring some again.

We can augment our beefy friends a little with some extras. We can’t give them orders or an Astra Militarum Doctrine, however. And they cannot benefit from any of the Regiment based Stratagems.

Firstly we have the Priest that gives them +1 Attack in combat. This stacks with Avalanche of Muscle – but AoM is only on the charge. This is very handy.

We have various ways to buff their Morale. But if you’re taking them in units of three this isn’t necessary because you can’t lose enough models to fail a Morale check. Unless the enemy has negative Leadership modifiers – remember that…

A Psyker can buff their Save using Psychic Barrier or make them harder to hit using Nightshroud.

A banner from the Custodes can give Astra Militarum Infantry a 5+ Invulnerable Save which is decent – but not worth bringing just to protect your Ogryns.

Yarrick allows friendly Astra Militarum Infantry to re-roll ones to hit for shooting and melee.

For Fun – Bullgryns vs Ogryns

You can make some very fun and fluffy combinations with Bullgryns and Ogryns. Their potential on the battlefield is great as is their potential for failure. Consider the following…

This fits snuggly into a Vanguard Detachment and costs just under 1,000 points. Yes, yes it’s a lot of points. But how awesome is it…

We have three Bullgryns in each Chimera and the rest of the Characters can fit too because ChimeraS can hold 12 models. Bullgryns count as 3 models each.

Each unit of Bullgryns when it charges now has 16 attacks hitting on 3+ re-rolling ones. They are S7, AP-1 and 2 Damage. One squad of three deals out 6.22 Wounds on average against a T7 enemy with a 3+ save. Which is decent! And we have three of these units to rampage around the enemy lines.

Yarrick can hit hard too and we have plenty of Bullgryn units to soak up Overwatch too. Don’t underestimate the power of a Primaris Psyker in melee too. They are S5, AP-1 and D3 Damage. They too are hitting on a 3+ and re-rolling ones. A lucky strike here and you’ve scored D3 wounds against the target.

The Astropath’s melee is less impressive but worth using if you’ve already mitigated Overwatch. Again they do D3 Damage – so if you can get a strike onto the target they could be finishing off a unit with ease.

The Psykers and their powers can kick in once the Bullgryns are disembarked. I’d recommend a mixture of powers;

The first two, as mentioned earlier in this article, buff the survivability of our Bullgryns.

The other two are attacking powers that can dish out Mortal Wounds. But both can target anything. This means you can select enemy Characters which might high-value targets because they are buffing nearby units. Remove the Characters with an assault of Psychic powers and have your Bullgryns march into combat unencumbered.

If you have an idea for an article on this series then please get in touch via Facebook, Twitter or the chat widget on this blog.

So far lined up I have;

I have already done Cadian Snipers vs Ratlings and to some extent, the Leman Russ Tactics article fits this series too.

Some of these may seem obvious to veteran players. But the suggestion came from a newcomer and this sort of article is valuable to new players who may not have such an in-depth knowledge of the Astra Militarum – and all it has to offer.

You can also read about more Bullgryn Tactics and also about magnetising your Bullgryns and Ogryns. And thanks for reading this Bullgryns vs Ogryns article.

Keep the suggestions coming too! I’ve had three superb suggestions so far via the chat widget! Thank you!