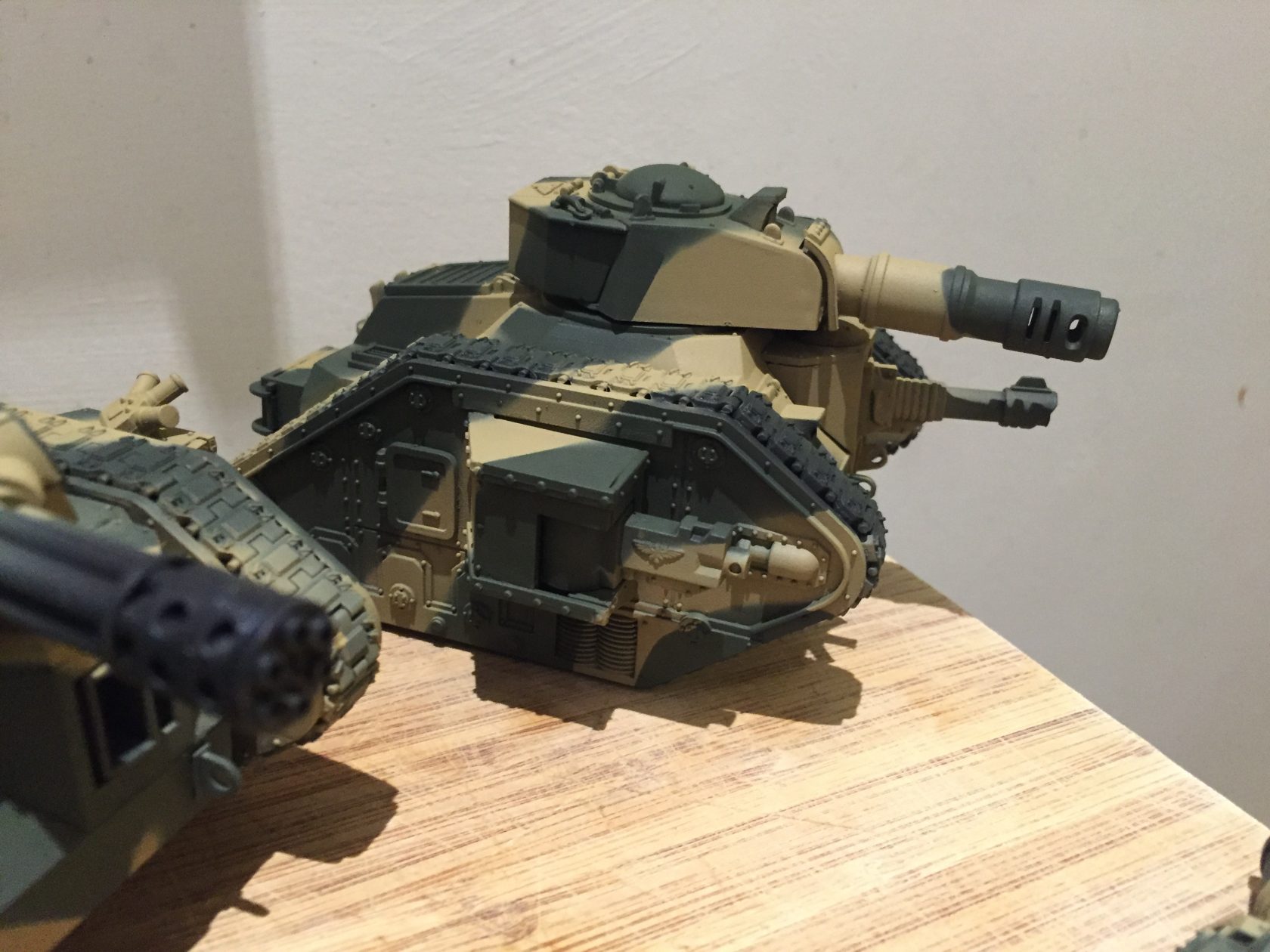 Today we try and tackle the behemoth that is the Leman Russ!

I’ve written this title and now I’m in deep. This is a big ask of myself to write about Leman Russ Tactics!

OK, it’s only a Leman Russ – how hard can Leman Russ Tactics be? Well, we have the variants. Then each variant could be under orders. Each variant could also be a Tank Commander or Pask. That’s a lot of various stats! Oh and then we have Forgeworld models! And Stratagems will affect their stats also! Catachan models will be slightly different too. Argh!

This article of Leman Russ Tactics will be broken down into two parts. The first part will cover the decisions you can make before and during a game that will improve your Leman Russ Tactics and their ability to bring you and the best fighting force in the galaxy victory!

The second will focus on target prioritisation using four basic targets and lots of MathHammer. I won’t detail the maths, but will just show the outcomes so you can easily see that Leman Russ of variant X is using Stratagem Y and Doctrine Z is best at killing hordes. Simple. Scroll to the bottom if you just want the table of results.

Gunners, Kill on Sight allows any Leman Russ to re-roll ones to hit. Making them like Cadians that haven’t moved. It’s handy for Cadians too if you need to move and still maximise shooting.

On Pask it’s brutal. He hits on a 2+ anyway so re-rolling ones mean you’re re-rolling all your misses. Very handy with a heavily Plasma based Leman Russ too.

Strike and Shroud allow your Leman Russ to pop smoke and shoot if you’ve not already used smoke. Something to use on turn one, on as many Leman Russ as possible. Turn one is when your enemy is most powerful. Mitigate that power with smoke.

Full Throttle is pretty impressive at scoring objectives. And for the Guard, it gives you a lot of movement. It lets a Leman Russ move and Advance in the shooting phase as if it were the movement phase – if it doesn’t shoot. You’re giving up shooting, but you can move again. If you move and advance in your movement phase too then your total minimum move is 22″ and your maximum move with excellent Advance rolls is 32″. Which ya know, is insane for a Leman Russ.

That massive boost in speed can also be used to plug holes in your lines and fill spaces that Deep Striking units may exploit.

And the Cadia specific order, Pound Them To Dust, allows a Leman Russ to re-roll all the dice when determining the random number of shots for a shooting attack.

Finally, the Tallarn tank order Get Around Behind Them lets your Leman Russ move 6″, before or after it’s shot. That movement doesn’t count as a move. Eg when using Grinding Advance. You could use this to effectively turn your Leman Russ into a Wyvern for a turn. Shoot, but not be seen. Take your shot then move 6″ back out of the line of sight. Denying your enemy a shot back in their next turn.

So as you can see the Tank Orders that Pask and the Tank Commanders give out mean you have lots of options for Leman Russ Tactics to run rings around your enemy or blast them from the battlefield.

The Catachans can re-roll one of the dice with weapons that do a random number of shots. While not all Leman Russ variants will benefit from this – some do.

Valhallans double the number of wounds for Vehicles when determining their characteristics. This is especially good for Tank Commanders who you want at BS3+ for as long as possible.

Tallarn Vehicles don’t suffer the penalty for moving and shooting Heavy Weapons. Coupled with their Order to move further, the Tallarn regiment are the most manoeuvrable Leman Russ you’ll find.

Forgeworld has a few Leman Russ for the Astra Militarum.

Annihilator Leman Russ – is effectively a Leman Russ with a Twin Lascannon.

Conquerer Leman Russ – is a Leman Russ with a Battle Cannon with a shorter range but has a co-axial Storm Bolter. The co-axial weapon allows you to re-roll all misses of the co-axial Weapons shoots at the same target as the main weapon. That’s pretty handy.

The Stygies Vanquisher and the Conqueror are not included in the data table below, because they are so close in performance to their none Forgeworld counterparts. They are slightly more devastating.

The best rule for the Leman Russ is Grinding Advance. It allows you to shoot the tanks main weapon again at the same target if the Leman Russ moves less than half its maximum move distance. Handy!

In order to compare how each type of Leman Russ performs we’ll test their ability to destroy models of various types:

These break down into the following basic stats.

This is your typical elite or heavy infantry. Tougher than horse type infantry but not as tough as a Terminator.

Typical vehicle/tank target. Just about every army has their vehicles based around this stat line.

A bigger and tougher tank. The 5+ Invulnerable save and extra toughness value really does make a lot of difference to the end result.

And so from this, we’ll be able to see which Leman Russ variant is most effective against each type of target. And which doctrines, orders and Stratagems are worth using and which are not given a specific target.

I won’t write about each variant because the results speak for themselves. E.g a Punisher tank will destroy hordes and suck against Knights.

I’ve included the damage done for the Tank Commander and Pask. Which might seem silly because of course they’ll perform better than the regular Leman Russ but I figured it’d be good to see how much better they perform and if they’re worth the additional points.

The easiest way to display this is in a big table so you can easily compare each variant against any other variant. And also see each variant plus any additional abilities such as Stratagems and doctrines.

Here are the fruits of my labour using MathHammer. Enjoy. You can view this as a standalone page here – which might be better on mobile.

P.S. the MathHammer site was developed by me! Bugs or ideas? Feel free to comment here. The above equivalents are available on MathHammer right now for you to use and quickly check your attacks against these 4 standard targets.

I hope you enjoyed this Leman Russ Tactics article, let me know in the comments…