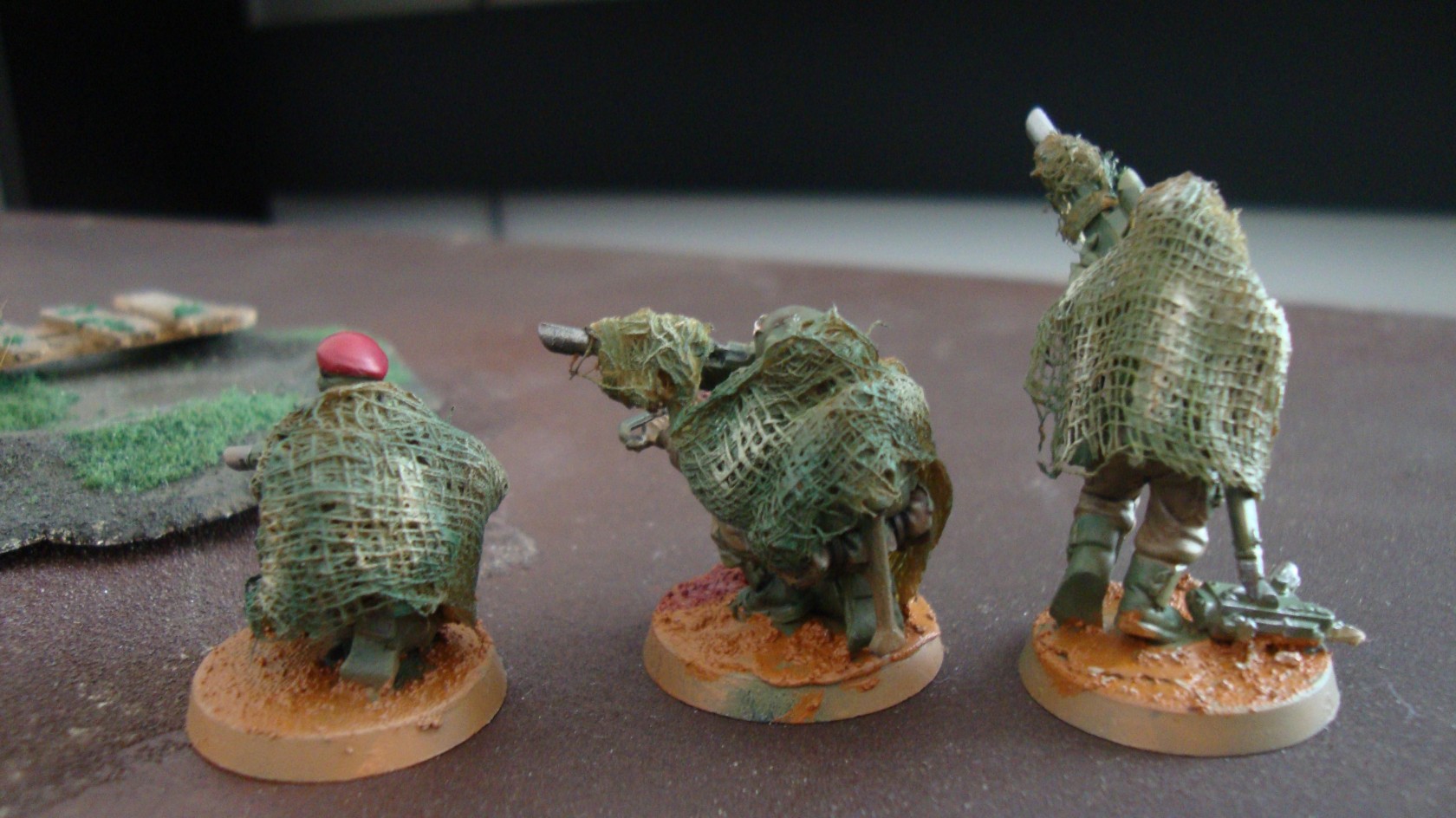 A deep look into Cadian Snipers...

I’ve been taking ten Ratlings to deal with enemy characters recently. And it doesn’t work very well. The Ratlings don’t get orders and they don’t get re-rolls of one and they can’t use the Overlapping Fields of Fire Stratagem. So today let us see how Cadian Snipers might perform.

It seems that dealing with characters in 8th edition could be the difference between a win and loss. Removing a character that allows the enemy to re-roll ones will reduce the number of enemy hits. And the sooner you can remove that ability from the battlefield the greater advantage you’ll gain.

This feels particularly true during my last game against the Death Guard at Boards & Swords where there were multiple characters doing all sorts of buffs to the surrounding infantry.

And so I set out to think through how I can more effectively deal with enemy Characters. 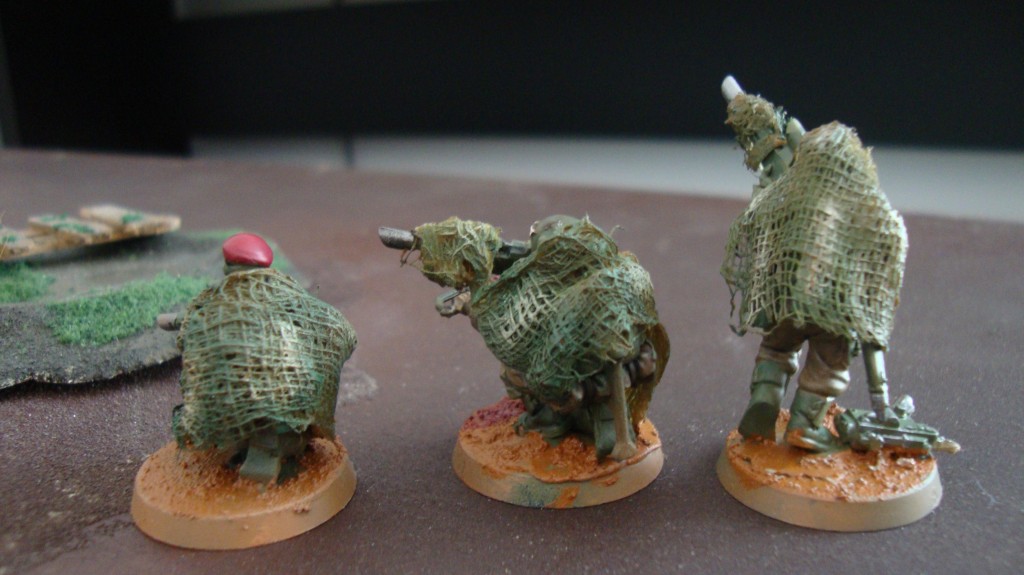 The above photo was from a guest article some time ago about making Camo Cloaks.

Using this Stratagem is perfect for dealing with Characters as it’s going to increase your successful hits by 16.6%.

They deal Mortal Wounds on a Wound roll of 6+ which is handy.

One snag I noticed while looking into this is that first wound for Overlapping Fields of Fire must be caused by a Cadian unit. So you can’t use the Ratlings to get that first wound. Gah!

My first port of call for my Cadian Snipers was a squad of Veterans with three Sniper Rifles. This will cost you 66 points and takes up an Elite Slot. Because I’ve gone for Cadians then they’ll be re-rolling ones To Hit.

And if you’ve got Overlapping Fields of Fire in effect then you’ll be hitting on a 2+ re-rolling ones. Which is nice! So there is no need to use the Take Aim order.

Therefore we’ll be using the Bring It Down order to give us re-rolls of one for Wound rolls. This slightly increases your chances of wounding and because Sniper Rifles cause Mortal Wounds on a 6+ you’ve got a chance to get that all important 6 again.

66 points plus 20 for a Platoon Command.

This isn’t bad at all.

It seems that Command Squads are better though for my Cadian Snipers. Per model, they’re the same cost as Veterans. You only get four in a squad by each can take a Sniper Rifle and you don’t get any redundant Guardsmen in the squad.

So now we have four Veterans all with a Sniper Rifle for 32 points.

62 points including a Company Commander.

The hit and wound rolls are the same as the Veterans but we now have four Snipers rather than three.

Command Squads seem to be the way to go. You get four Snipers and have four points left over. You do need to pay the tax on the Company Commander which is an extra 30 points. But that is still cheaper than the Veterans without any ability to give them an order.

A detachment of Command Snipers

This can make up a portion of a Brigade or Battalion Detachment. It can’t be a Vanguard Detachment however because a Vanguard is limited to just two HQs and we need three here.

I’ve taken three because you must have redundancy in an Astra Militarum list. One squad will fail completely, one squad will be meh and the other squad will get the job done. I’ve been applying the same logic to Heavy Weapons Teams recently too.

But a Leman Russ can’t put out 12 shots hitting on a 2+ re-rolling ones into the enemy Warlord. Not to mention the ten Ratling shots.

A detachment of Veteran Snipers

If you’re taking Veterans anyway and want to go down this route then you can do for 308 points. You only get nine Snipers though.

The Platoon Commander only gives out one order. You can get another for 1CP via the Inspired Tactics Stratagem and then Laurels of Command gets you a possible extra order. This removes the need for a Company Commander and saves you 10 points.

But if you’re pinching on points then you probably shouldn’t be using Veterans for this task.

Veterans are just a meh choice anyway. I wrote about that – To Veteran Or Not – a while back. but if you’re taking them anyway or want the option for a Heavy Weapon they maybe they’re right for you.

This is only really worth taking versus Chaos in the context of Character assassinations. Against other forces, it only gives you a re-roll of one for Hits and Wounds. Which we’ve got anyway.

Versus Chaos, you can re-roll all failed Hits and all failed Wounds. But we can get the re-roll for Wounds another way…

This is handy. You select a target at the start of the battle. You can re-roll failed Wound rolls against the target for your units within 6″ of your Warlord.

Coupled with all the Snipers this feels like the best way to get as many Mortal Wounds as possible. It’ll only work against one unit though. Once it’s dead then Old Grudges is lost.

But Old Grudges can be used with those Ratling shots. Helping you to get more Mortal Wounds.

The main problem I see with this approach is that you’re spending circa 250 points on Toughness 3 models (or Toughness 2 in the case of the Ratlings) on a very specific task.

If the enemy wants to remove them on Turn 1 then they probably can fairly easily. You can use Take Cover to help with the save. But they’re not characters like the Vindicare – so are open to shooting from anything.

The second issue is that the enemy characters could just hide from the snipers until they’re all dead. If your snipers don’t have line-of-sight to an enemy character then they’re wasted. But often the enemy Warlord needs to be in the thick of it to give out their bonus.

I think I’ll try it for sure in the future. But I don’t expect it to perform spectacularly.

What do you think? Tactical Genius or Command Catastrophe?