A look at a practical 1,750 list with some joined up thinking and buffs galore!

It’s not maxed out because it gives us some wiggle room for cutting it down to 1,500 or 1,250 points. Or adding units that counter our local meta more effectively.

I wanted to create a list where the benefits and buffs dished out by Characters, Warlord Traits, Doctrines and Stratagems can be utilised by as many units as possible and as effectively as possible.

If a unit isn’t directly improving another unit in the list or isn’t being improved by another asset in the list – then I didn’t include it. That approach is extreme of course. But again we have the wiggle room, with spare points, to add a unit to the list if we need a specific unit to fulfil a specific task. E.g. Ratlings. They’re not really buff-able.

I’ve maximised the Command Points (a.k.a. CPs) in this 1,750 point Astra Militarum List to ensure we can use our Stratagems as often as possible. I’ve not included Creed specifically but if we add him in, that’s 2 extra Command Points right away.

The list is a Brigade Detachment which is Battle Forged – giving us 12 Command Points. Or 14 with Creed.

I’ve also maximised our ability to regain Command Points. Ensuring again that those Stratagems are available for as long as possible.

Your opponent will be sick of you using Aerial Spotter and Overlapping Fields of Fire every turn!

Our Warlord Trait of Grand Strategist gives us back our CPs on a 5+ and the Kurov’s Aquila gives us a CP on 5+ every time the enemy uses a Stratagem.

If we bring those two Command Point buffs then over the course of a 5 turn game we can bring back 4 of our own CPs from our starting 12 – on average. If we then assume the enemy uses 2 Stratagems a turn for 5 turns that’s another 3 bonus CP for the Astra Militarum to use over the course of a game. In reality, this might be a lot lower or higher – higher especially if its Tau, another force can bring back their Command Points.

These are only assumptions but that is the best we can do here. It should be clear that refuelling your Command Points is a good idea, you can start with 12 and boost that by another 7 or so – taking your total to 19 for the game. That is nearly 4 CPs a turn to be spent for the first five turns of a game.

The effects of regenerating CPs will also cascade. Something not taken into account in the above example. But consider the following:

It would be a very lucky Commander to have this happen multiple times. But the potential is there for you to continue regenerating your CP pool until the end of the game.

This enables you to continue using your Stratagems throughout the whole game. Something I really like the idea of for the Guard. Their planning and resource usage would be second to none enabling them to maximise their effectiveness for as long as possible and hold out for longer than they really should.

You can still take a form of this list at 1,250 points and even 1,000 points and still get 12CP – Astra Militarum 1000 Point List 8th Edition. It just requires some trimming and tweaking. 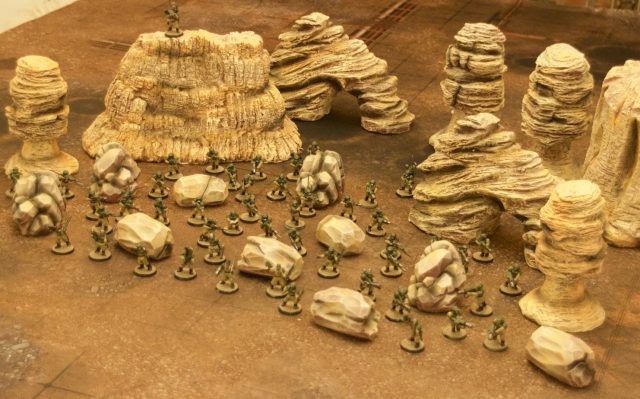 This is the basic list, the building blocks, more details follow after this list overview. This detachment gives you 9CP, you’ll then get another 3 for being Battle Forged. That makes 12CP.

Then possibly another 2CP, if you take Creed. This list is not Cadian, or Tallarn specifically. Amend it as needed to suit your Regiment’s Doctrine.

You’ll need to take these as separate choices to get up to the required three units from the Heavy Support section. It that makes little difference to your overall game. But you get the idea.

Please do get in touch. I would like to hear from you and your thoughts on this list as a base

This is how I see it working like so.

Your 60 Guardsmen can easily wrap up your tanks, artillery and characters. This will stop pesky deep strikers from getting too close to your important units. As the game progresses and the enemy runs out of deep striking units then move out and expand your area of control.

I have not added any specific special weapons nor heavy weapons to the list. If you take any and what you take will entirely depend on who you’re facing. Missile Launchers are a good idea to take on everything as they have two firing modes. Your Wyverns can be used always as anti-infantry so Lascannons or Autocannons might be wise for heavy weapons here.

There is a decent sprinkling of Characters in this list. The two Company Commanders should be used to dish out 2 orders per turn each, the one with Laurels of Command can make a 3rd Order on a 4+. This gives you a possible five orders per turn. Consider taking a Platoon Commander for an extra order if you want to ensure each of your six squads can get an order each per turn.

Use these guys for two reasons, Smite (of course) and giving your tanks and characters some more durability. That -1 to hit and +1 saves could be the difference between losing a Company Commander and not. Or saving your Tank Commander for one last turn of shooting. Or slap that -1 to hit on your Bullgryns before they charge into Power Fist wielding Terminators.

While these guys fill an Elite slot they should be used for a specific role, take them with Melta or Plasma. Not Flamers – their 3+ BS is wasted with Flamers. Consider taking a Valkyrie too and just have them fall from the sky to wipe out a specific threat or put multiple wounds on an enemy creature/vehicle.

With 5 Leman Russ and 2 Wyverns, this list can pack a punch. Your Wyverns should always be targetting infantry and one can always use Aerial Spotter to re-roll all misses. If you’re not running a Cadian Regiment, then the Master of Ordnance can be used with good effect here to re-rolls ones for your Wyverns. Read more about Wyvern Tactics.

Again like the heavy weapons mentioned above I have not specified with Leman Russ types to bring. That will depend on who you’re playing. The Vanquisher seems like it should always be avoided. A Battle Cannon Leman Russ does slightly more damage to a T7 3+ enemy than a Vanquisher does on average. Wow, the Vanquisher does really suck. 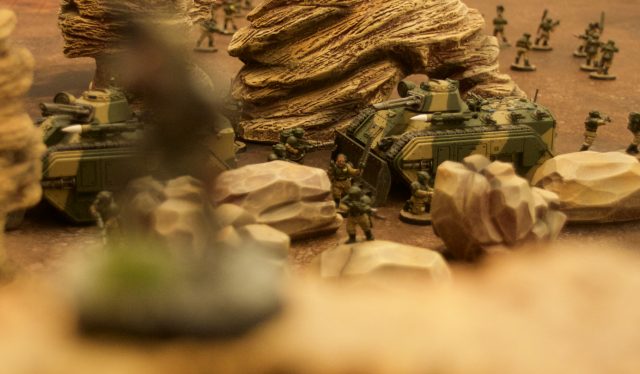 I was recently asked on a Facebook message via my Cadian Shock Facebook Page about how to start an Astra Militarum force. I thought this would make a good article. So that is coming soon! In the meantime here is a list of some Warhammer 40K Astra Militarum Essentials for starting a 1,750 point Astra Militarum List.