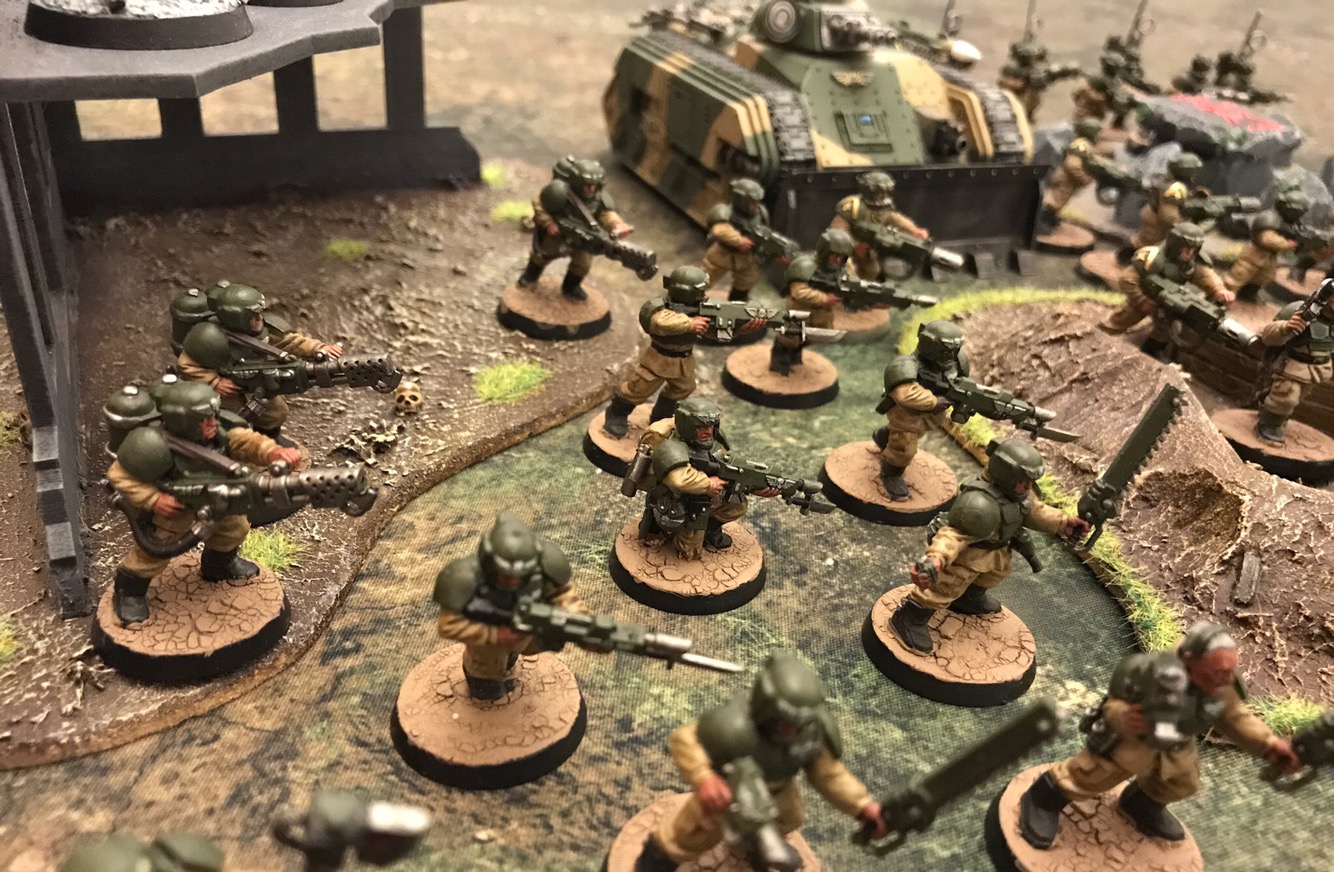 Lets explore the possibilities of 12 Command Points in a 1,000 point Astra Militarum List

I often start writing this type of article and think “this isn’t worth it, everyone will know this”. In fact, that happens a lot when I write any 40K Tactics or 40K List articles. But there is always someone out there that won’t of thought of this. 40K is seeing an influx of new blood and old blood coming back. Which is great! (I base that thought on the number of new people joining Twitter and Reddit as hobbyists.) So here goes, 12 Command Points in a 1,000 point Astra Militarum list.

Another reason for doing this now is that the new Astra Militarum Codex has been announced for this year – I think? With it, I imagine we will see a host of new Stratagems. This is great! At present taking 12 Command Points in a list is a little bit meh. Because the Stratagem arsenal is so limited. Once the new Codex arrives we will have a lot more to play with and I can see 12 Command Point Astra Militarum lists being very nasty lists indeed. Yay!

It turns out 12 Command Points in 1,000 points is easy to do with the Astra Militarum. In fact, at the lowest points cost possible it’s only around 640 points. And it gives us some wiggle room to make an effective list – rather than just meeting the minimum requirements but having a terrible list. 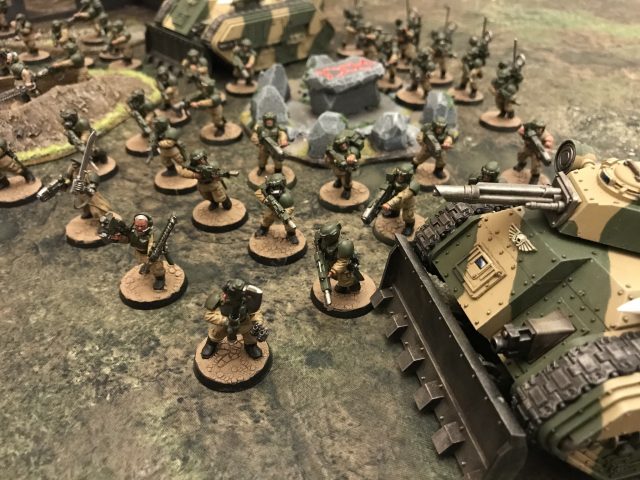 Some recently painted Guardsmen of mine – ready for the meat grinder!

The terrain in these pics is from The War Gaming Shop. And the mat used is from Deep Cut Studios.

As I’ve been thinking about this type list while writing it, it doesn’t feel cheesy or not fun to play with or against. The Brigade Detachment gives us lots of slots to play with but doesn’t allow us to go nuts and break the game. Which is great – our force feels real.

Here is the cheapest we can get away with for a 12 Command Point list – it’s valid but not a great list. We can build on it though.

Gives us 6 Astra Militarum Orders per turn with a 6″ range. Which leads us nicely into…

We’ve now got 6 Infantry Squads and 6 Orders. This means we have an Order per Squad per turn. Nice! It’s only a 6″ range for the Orders but that’s fine. It gets expensive trying to kit out everyone with Vox-Casters and if you position correctly your Commanders can move up with your Squads, be protected and dish out Orders.

Perhaps not the best choice here but it fills the slots. We will revisit Elites and try and optimise this area for our list.

Again we will revisit this slot to improve its usefulness.

Let’s revisit this too.

And that is around 640 points with the cheapest options you can take for each unit or no upgrades at all e.g. The Infantry Squads have no upgrades and the Heavy Weapons Teams have Mortars.

But that’s it, in short: 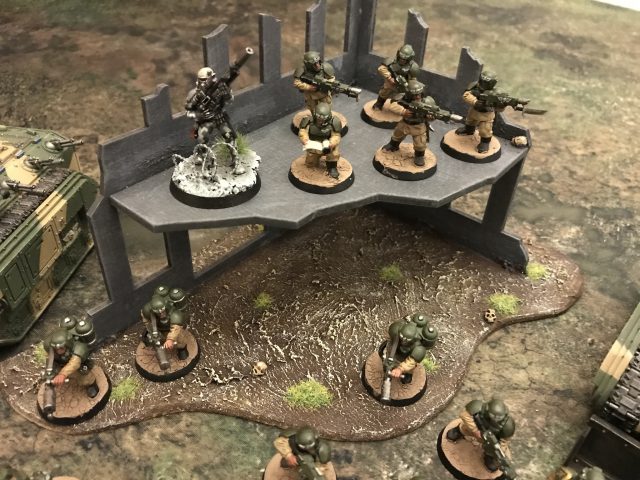 Toys like the Vindicare are probably not possible with 12 Command Points at 1,000 points

Now we have a minimum base what can we do to improve it? With ~360 points to play with, we can take some nice extras to compliment our force depending on who we’re facing. Let’s take a look at some possibilities to boost its effectiveness. Obviously, you can’t take all these but two or three, maybe four, are possible with the spare points.

We have the least amount of room here to take specialist models because they’re expensive. But Creed or Yarrick would be my first choice while dropping a Company Commander.

Creed gives us three orders so we could even drop another Company Commander and still have 5 Orders and a spare HQ slot for a Tank Commander or Pask. Creed gives us another 2 Command Points too!

Swapping out a Squad for some Conscripts is a good idea. Use them as a Meat Shield, stick them with a Company Commander and Commissar.

Then use spare points to take some Special and/or Heavy Weapons too. It’s often useful to have two Infantry Squads with Heavy Weapons to objective hold in the back and fire long ranged Autocannons or Lascannons into targets.

Thanks to @Lebowski1111111111 in the comments for suggesting Militarum Tempestus squads. I only own 5 that are not built and not painted so I overlooked them in my initial post. They’re a great way of getting some decent firepower up the field. The Command Squad can get 4 Plasma or Melta guns up the field using Aerial Drop. Use a Tempestor Prime to order them to re-roll ones too! Safe Plasma Shots!

This is where we have the most options for our force. Ratlings seem like a good choice here for some infiltration objective grabbing and sniping. They’re cheap too.

Originally I had three Commissars for Elites which is a bit overkill. I love Bullgryns, I’d take at least three here with Slabshields and Bullgryn Mauls then stick them with Yarrick.  Now they can re-roll ones to hit and have Ld 9 thanks to Yarrick.

Master of Ordnance would be a good cheap choice here too. If you’re taking the right Heavy Support options of course.

I’ve not used any Hellhound variants this edition but they look like solid choices for burning up Marines and other Elite Infantry.

If you’re worried about mobility and objectives then Rough Riders are a possibility.

I’ve also not used Armoured Sentinels yet. They seem meh for the extra points and a bit better save. The Movement bonus of the Scout Sentinels seems a lot more useful. I use them to move up into cover, hide and then Heavy Flamer units that charge.

I’d take Wyverns here. Maybe two and drop two Heavy Weapons Teams. Basilisks are an option too especially if you went for the MoO in the Elite slot.

Leman Russ might be a bit too expensive here. But I’ve had limited success with them in 8th Edition. Each time I take one it’s killed on turn one or two after missing a lot.

And that’s the rundown done. It’s very easy for the Astra Militarum to get 12 Command Points or 14 with Creed. Now we just need the Codex to see how we can best put them to use.

Here’s my 12 Command Point list which comes to exactly 1,000 points:

It has a little of everything, although lacks D6 Damage weapons, e.g. Lascannons. I tend not to use them as they are too risky with BS4+. I’ve gone for massed shots and mobility/interference. The Sentinels, Rough Riders and Bullgryns can get in close and start messing with the enemy’s plans while your infantry with Heavy Weapons sit back and plinks wounds from multi-wound models. The Squads with no Heavy Weapons can move up and take objectives or act as Meat Shields, fall back then allow other units to Fire Rank Fire, Second Rank Fire into the now vulnerable enemy chargers. 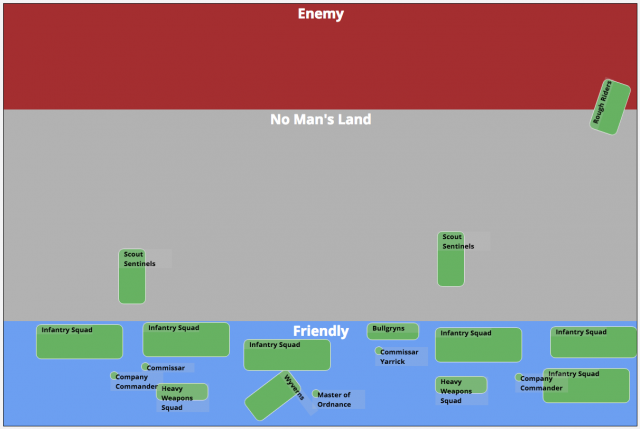 Remember to use MathHammer 40K to crunch those numbers in your 12 Command Points list! 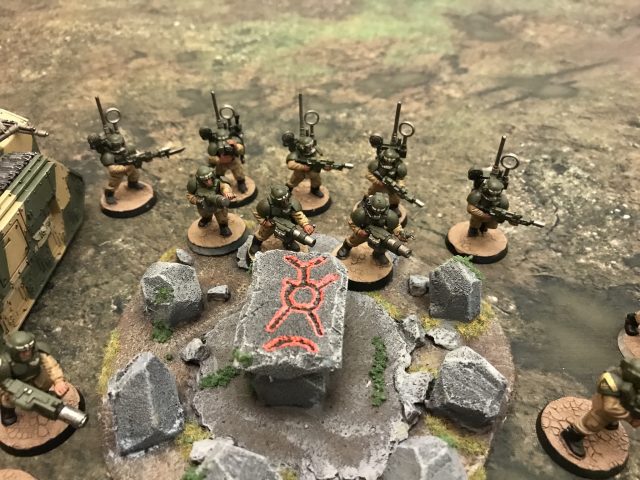