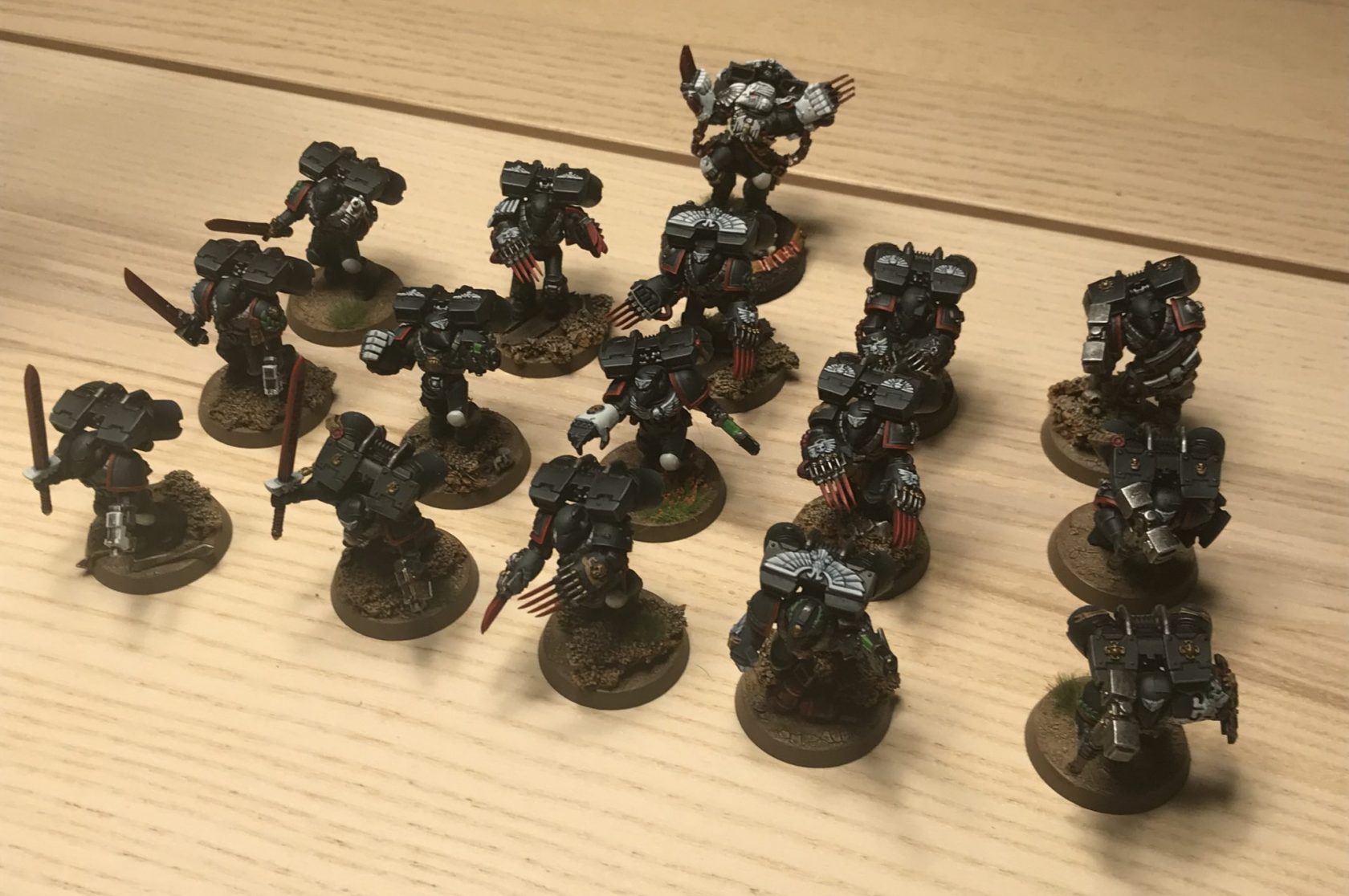 The Raven Guard are coming to town...

I now have a Vanguard Detachment of Raven Guard Vanguard Veterans to accompany my Astra Militarum forces into battle! These Raven Guard were painted by Red Eagle Studio for me.

I’ve had Shrike for some time now. Painted by a friend who is now inactive in Warhammer, Resin Junkie. Now they are based on their dry mud bases and pinned – they are good to go.

My detachment is 15 Vanguard Veterans.

They were painted by Red Eagle Studio and I did the dry mud bases.

This all comes in at a cool 577 points including Shrike. Or 427 points without Shrike. That’s a significant chunk of points in the games I play. So they better bloody well kick ass!

At this time I don’t have an alternate HQ so I need to take Shrike. 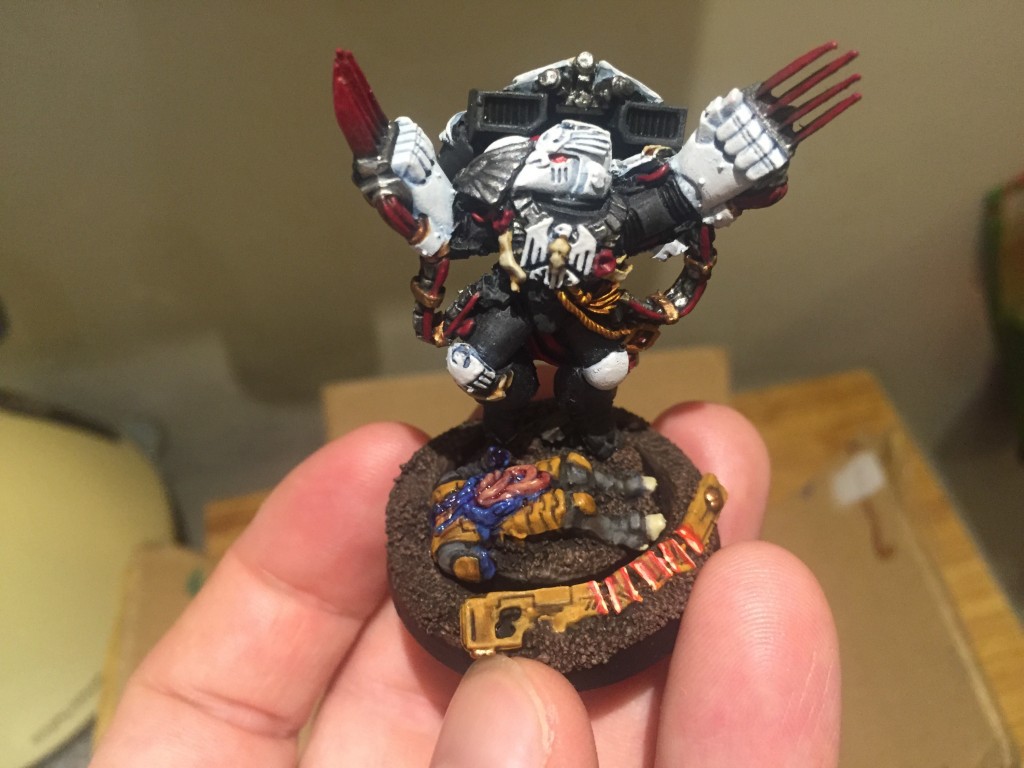 The most obvious choice for me is to put a Thunder Hammer and Storm Shield Veteran in each squad and then fill out the rest of the squad with as many Veterans with the same weapons as possible. 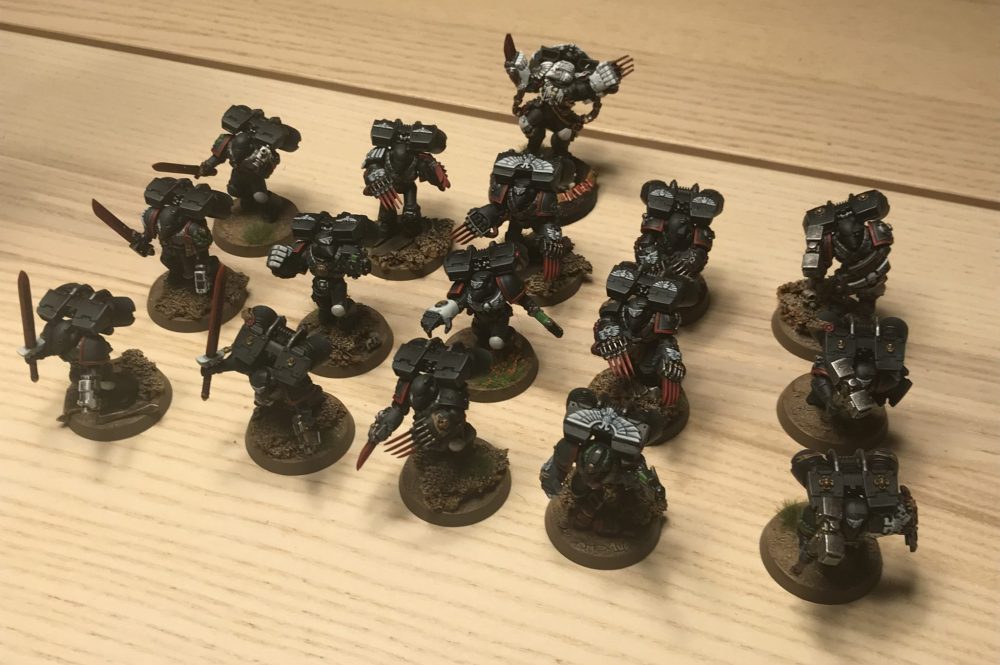 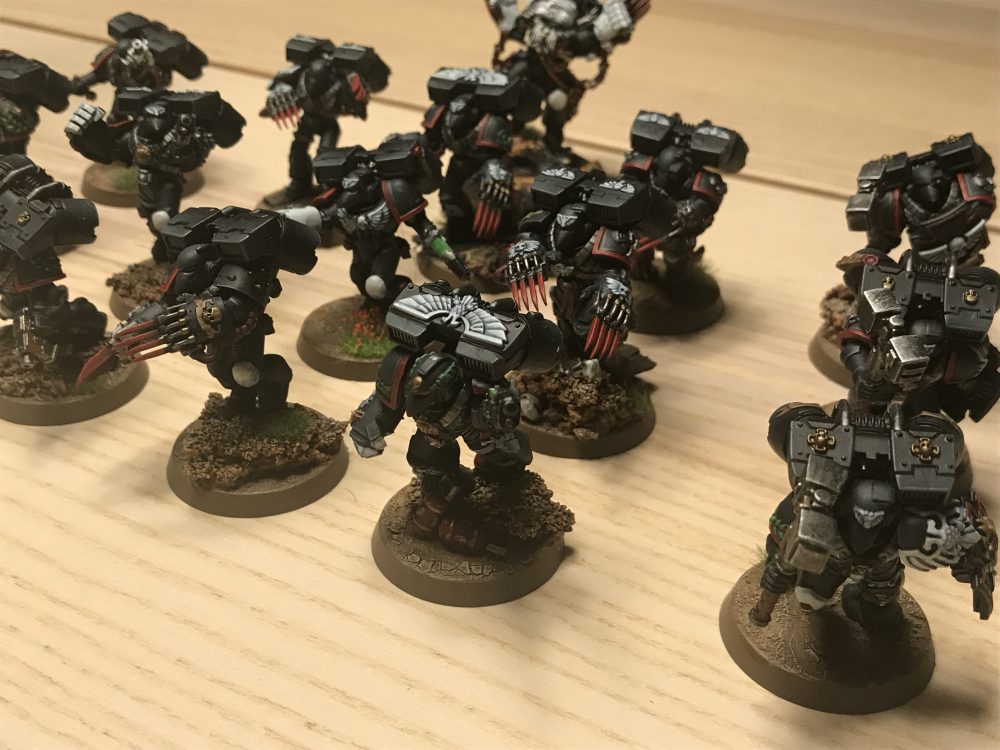 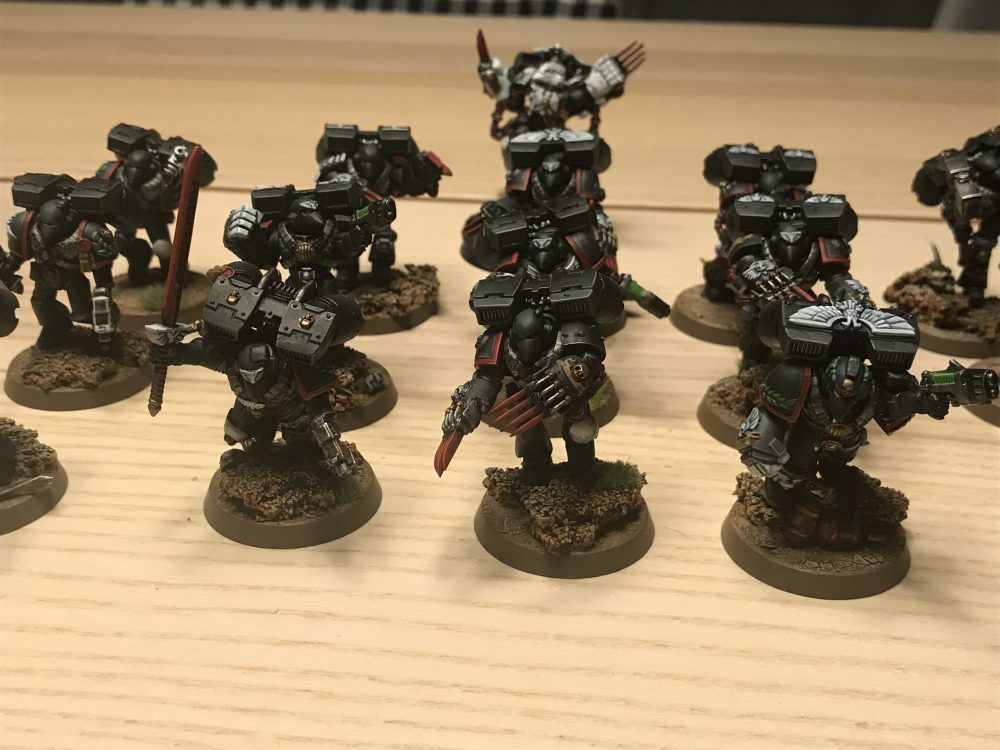 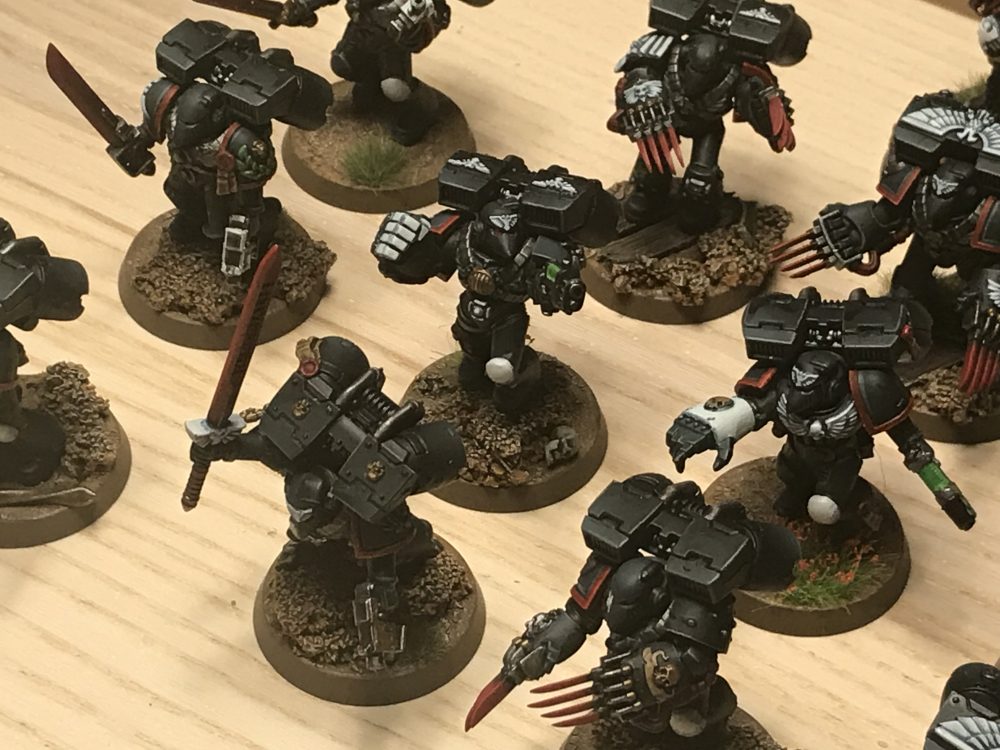 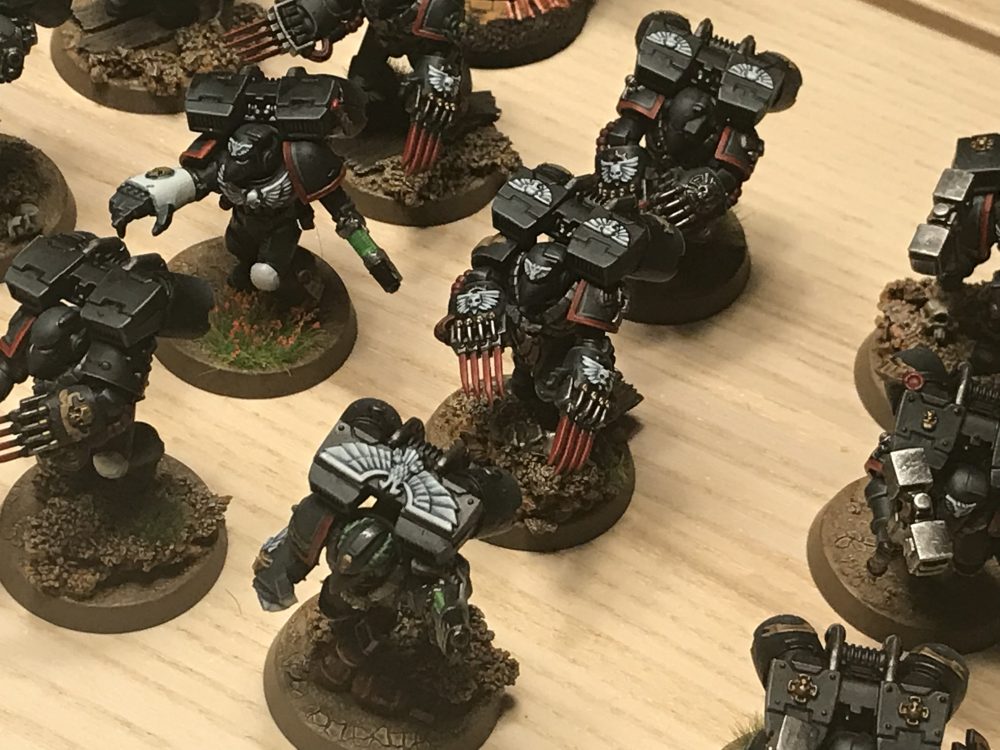 Simple, Deep Strike in on turn 2 and win the game.

Well maybe not. The Storm Shield Veterans will tank the Overwatch with their Invulnerable Save. Shrike will allow them to re-roll their charges and misses in combat. As long as they make it into combat and I pick the right targets then we should see some decent damage output.

I often take Wyverns, because they are good and they’re painted, but with the new Emperor’s Wrath Artillery Detachment I can stop an enemy unit from shooting Overwatch by using the new Suppressive Fire Stratagem.

I hope that having Shrike and 15 Vanguard Veterans appearing in the enemy lines will act as a decent distraction from my Guard forces. For 577 points I could bring 144 Guardsmen which will certainly slow down advancing enemies.

I feel like I’m in dangerous territory here. I’ve now got Raven Guard and Custodians as allies to my Guard. And I if I’m not careful I’m going to end up with the Loyal 32 and just allies.

But that isn’t my intention and certainly won’t happen. I’m all about the Guard and the majority of my forces will be comprised of the Guard.

For those that don’t know, because many won’t know, the Loyal 32 is when you take the minimum Astra Militarum units to make a Battalion Detachment. This gives you 5CP.

Its considered iffy to run armies in this way. Because you’re taking the minimum requirements to get the maximum effect. Also known as Min Maxing. It isn’t considered very sportsman like to play like this as it’s essentially playing to win and only win.

But that isn’t my intention with the Raven Guard it Custodians. I’ll use them to augment my Guard and make them more interesting to play with. Winning is nice too of course!

First game with them should be next week!