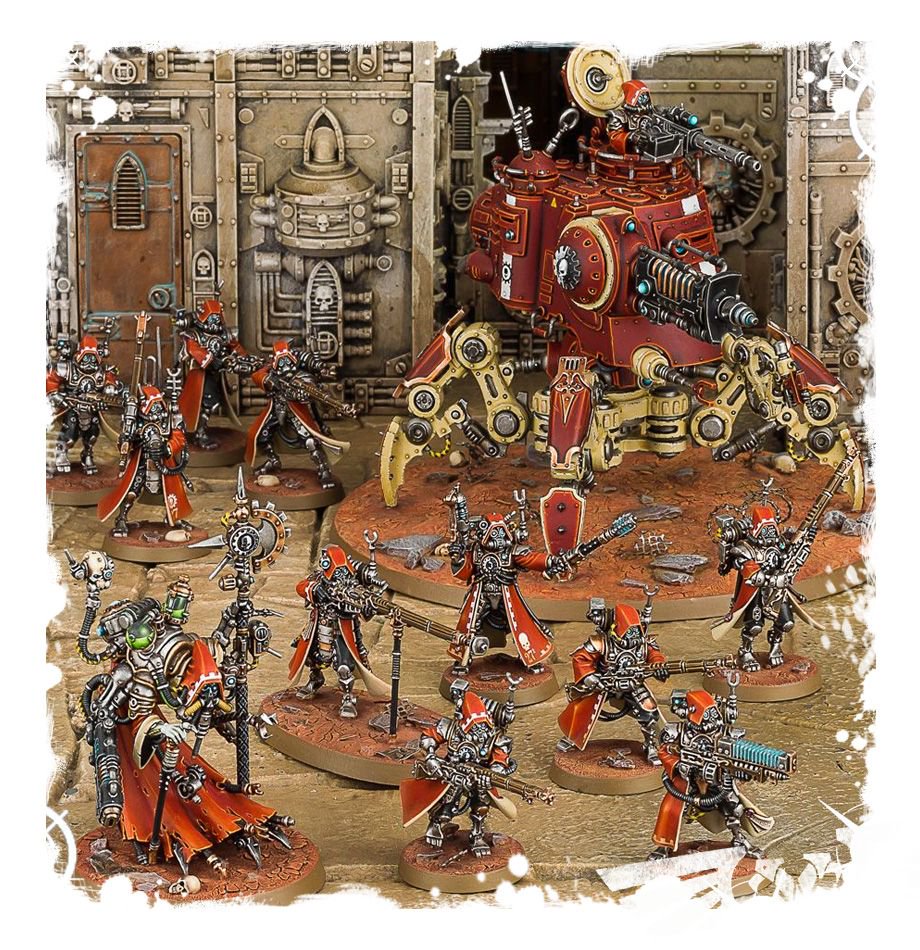 A new day and some new allies? Skitarii?

Ever since the Ad Mech and Skitarii first arrived on the scene for the Imperium, I’ve wanted some. From a rules standpoint and from lore and from a rule-of-cool standpoint. Three valid reasons I think!

Of course, they should fill a role and that role probably shouldn’t be shooting. Because the Cadians have that covered.

I wondered if a melee detachment of Skitarii would be a good idea? After all, the Guard is terrible at that. But my Guard has that covered too on the form of my Raven Guard and my Custodians. So, what role? 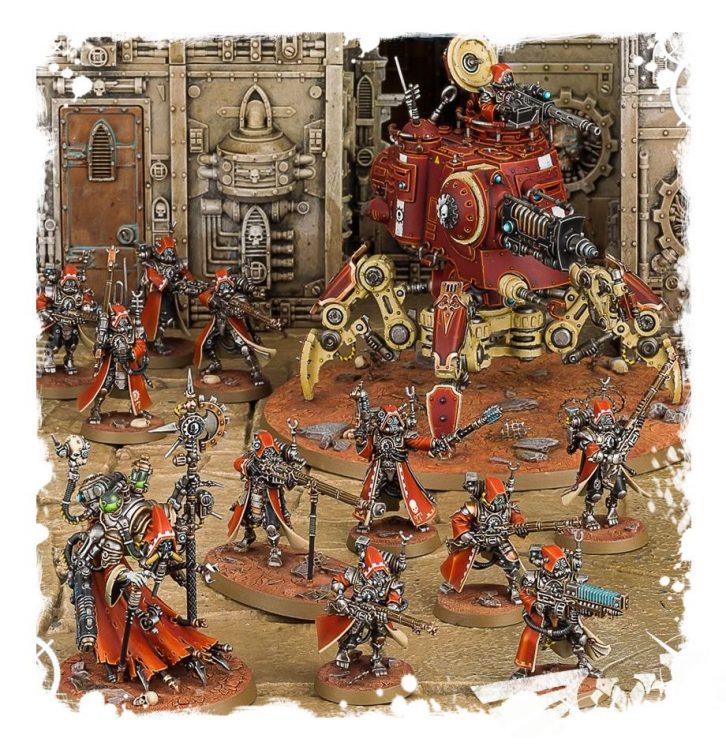 I started by taking a look at the Skitarii Dogmas for some inspiration.

I ruled out Mars because their Dogma just makes them better overall. It’s not very specific to a purpose. It makes whatever purpose you chose for them, more effective by granting more Canticles.

Graia caught my eye as their Dogma keeps them alive a little longer by ignoring lost wounds on a roll of a 6. This gives a little more survivability but probably won’t amount to much when it comes to fulfilling a role.

Similarly with Lucius. Treating AP-1 as AP0 is nice. But doesn’t inspire to build a specific Skitarii force.

Metalica looks like a solid choice. You can Advance and fire Assault Weapons with no penalty or Advance and fire Rapid Fire weapons, but treat them as Assault weapons. This gives you firepower and movement. A rare sight for my Cadians.

Agripinaa, Ryza and Stygies all seem uninspiring for me. I’m sure they all have their uses though. It’s looking like Metalica is the choice for me.

And so, now I’m settled on Metalica as my Dogma for my Skitarii – how will they operate alongside my Guard forces?

Given their Dogma effects Assault and Rapid Fire Weapons I’ll be concentrating on infantry as these types of weapons are carried by infantry more so than vehicles. From this, I think that the Skitarii Vanguard Skitarii Vanguard is my better choice as their Radium Carbines are Assault. This gives them their standard move plus and Advance and can still fire 3 shots with their weapons using their full BS of 3+.

Given their ability to move and shoot I think using these guys as a screen for my vehicles could work well. They can move up and into the enemy with their move and then Advance closing between 7″ and 12″. As long as those enemy units do not have Fly then this should work well. They can also open up with their Radium Carbines into the enemy before awaiting the inevitable charge.

The Infoslave Skull Stratagem is also useful here, for screening. It allows Ad Mech Infantry units to shoot at enemy’s that arrive via Deep Strike within 12″ of them – but with minus one to hit. It could be a nice deterrent. 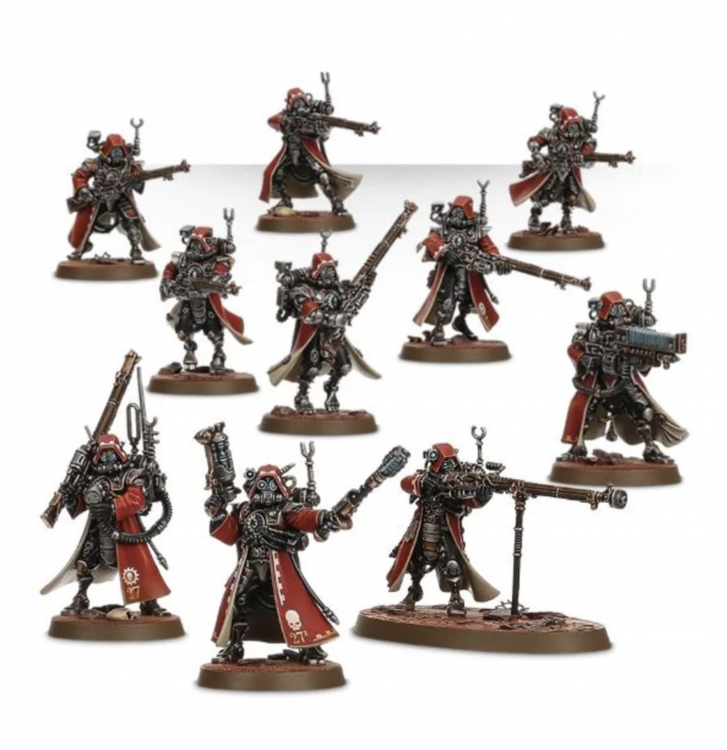 The Stratagem Protector Doctrina Imperative is an interesting one, it is just 1 CP. You can add one to hit rolls or two to hit rolls if the unit also has an Enhanced Data-Tether, these are just 5 points. The Radium Carbine does 2 Damage on a wound roll of a 6+. So we can really increase our hits with this Stratagem and get re-rolls ones to hit with a Tech-Preist Dominus which will give us a lot of hits out the 15 available to us from 5 Skitarii Vanguard. From those 15 we are bound to get some 6s to up the Damage to 2.

The Deafening Assault Stratagem that the Metalica have could be useful too. For 1 CP it reduces the enemy’s Leadership by one if they are within 6″ of the selected friendly unit. This is very useful against low model count units. Units that normally find it very hard to fail a Morale Test because they have so few models to lose. With this Stratagem though we can reduce their Leadership to try and make an enemy model run away.

Skitarii Vanguard also has Rad-Saturation which could be very useful, especially if these guys are being thrown forward as a speed bump. Charge them into combat with some other units to reduce the enemy Toughness by 1. It is unlikely the charged unit will stick around for the whole of their next turn though for my next shooting phase.

I nearly missed this little gem. An Assault 2 Plasma Gun with a range of 18″ and the ability to overcharge. Being an Assault weapon means it plays right into the type of force I am looking for. You do not usually expect Plasma to run towards you during an Advance and then unload on you.

Canticles of the Omnissiah

I like the look of Benediction of the Omnissiah and Shroudpsalm for the Metalica. The former lets you re-rolls ones to hit in the Shooting Phase and the latter gives the benefit of cover. Re-rolling of ones is always nice, especially with Plasma.

The benefit of cover seems like a good idea when these guys may well be running face first into the enemy trying to get as close as possible. 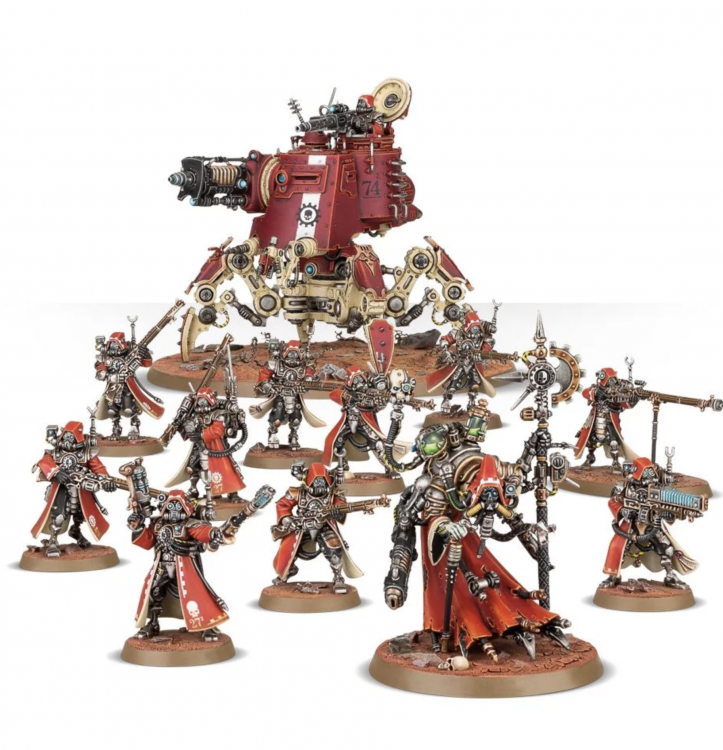 The Skitarii Start Collecting Box seems like the most logical place to start. I can get 10 SKitarii Vanguard from this box, plus a Tech-Preist Dominus.

The Onager Dunecrawler will be a nice addition too I am sure, great model, too!

A Dominus, Onager Dunecrawler and 2 squads of Skitarri Vanguard with 2 Plasma Calivers each comes in at about 330 points. It is a chunk of change and a significant investment of points for the level of games I play. But I like it and I like the way they could play out. 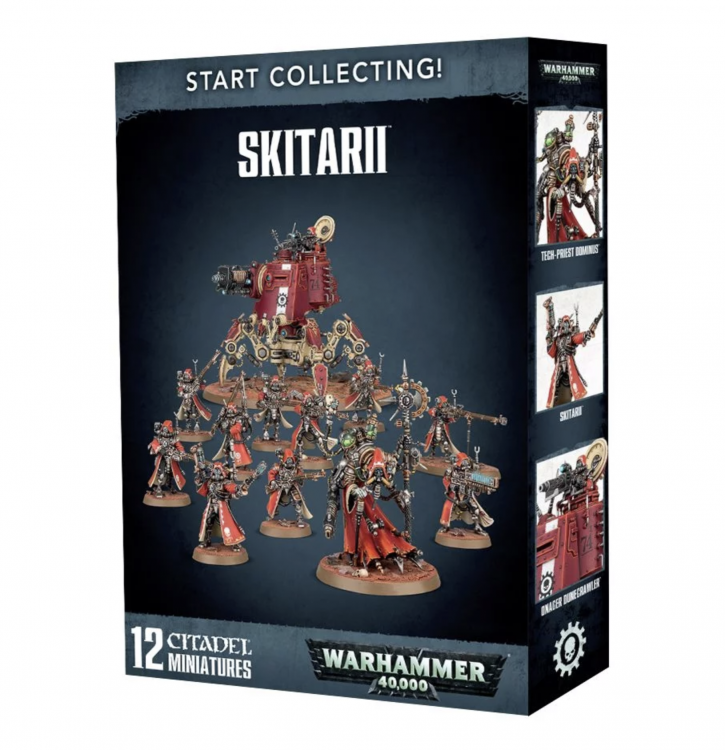