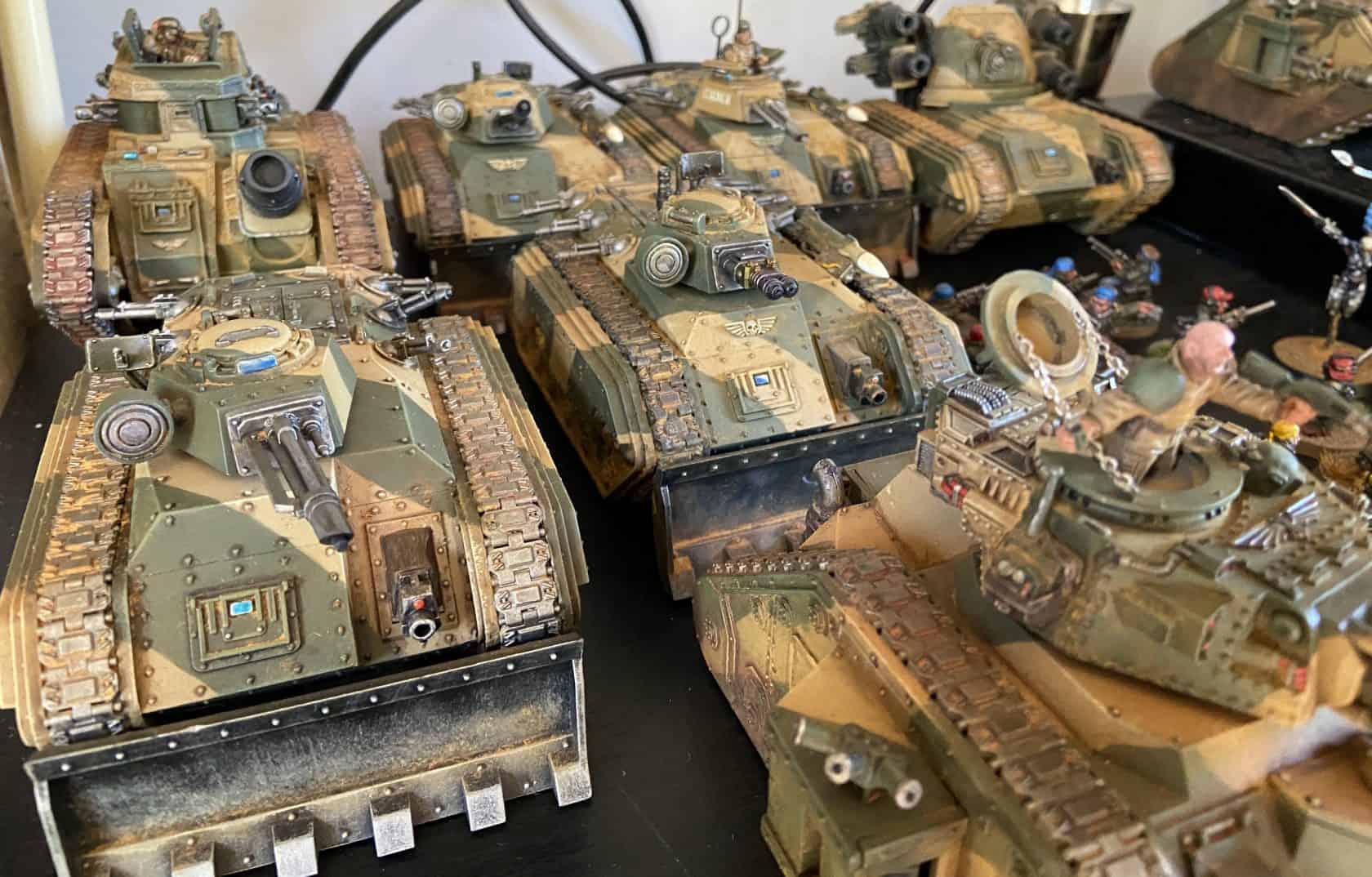 One of my final games of 8th Edition, Mech Guard and Assassins vs Eldar & Necrons.

Welcome to this battle report which sees some Mechanised Guard plus all four Imperium Assassins take on the Eldar and Necrons at 2,000 points. This battle, I think, will be my second to last game of 8th Edition, I will have another one to settle a rivalry! Eldar and Necrons because I was up against a Father/Son team and both wanted to use their models. Which was fine by me! A dead xeno is a dead xeno is a dead xeno. 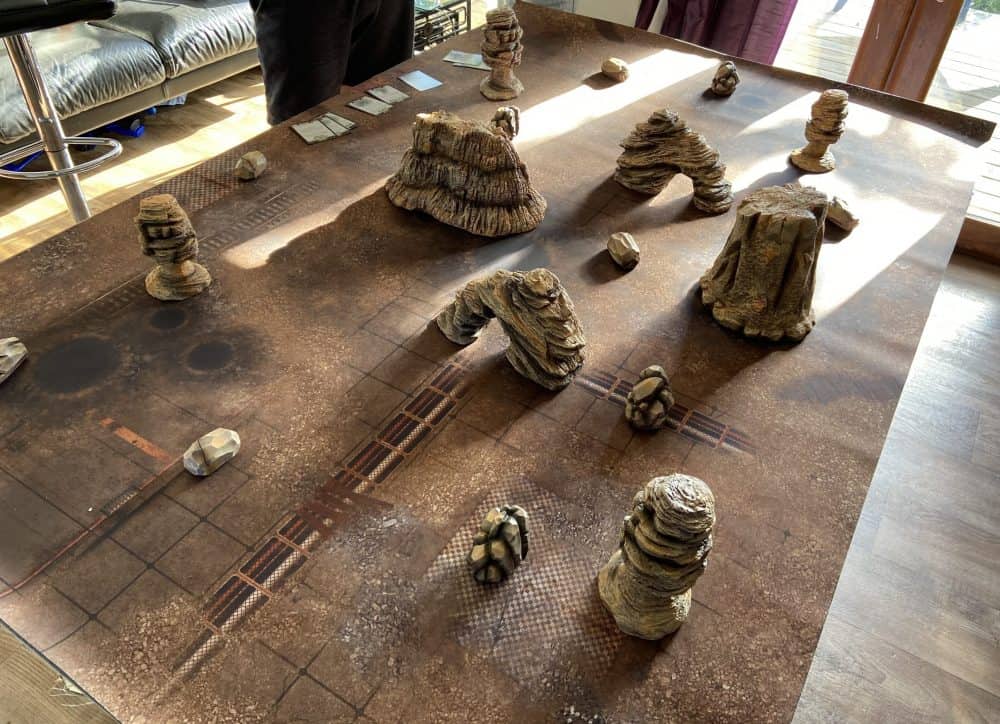 This is likely to be a quick debrief of the battle, the key moments and the key tactical takeaways – rather than a blow-by-blow, turn-by-turn battle report. But stay tuned, there are some key moments!

We played the Four Pillars mission from Chapter Approved 2019.

The main aim of this army was to be all mechanised time minimum set up time. 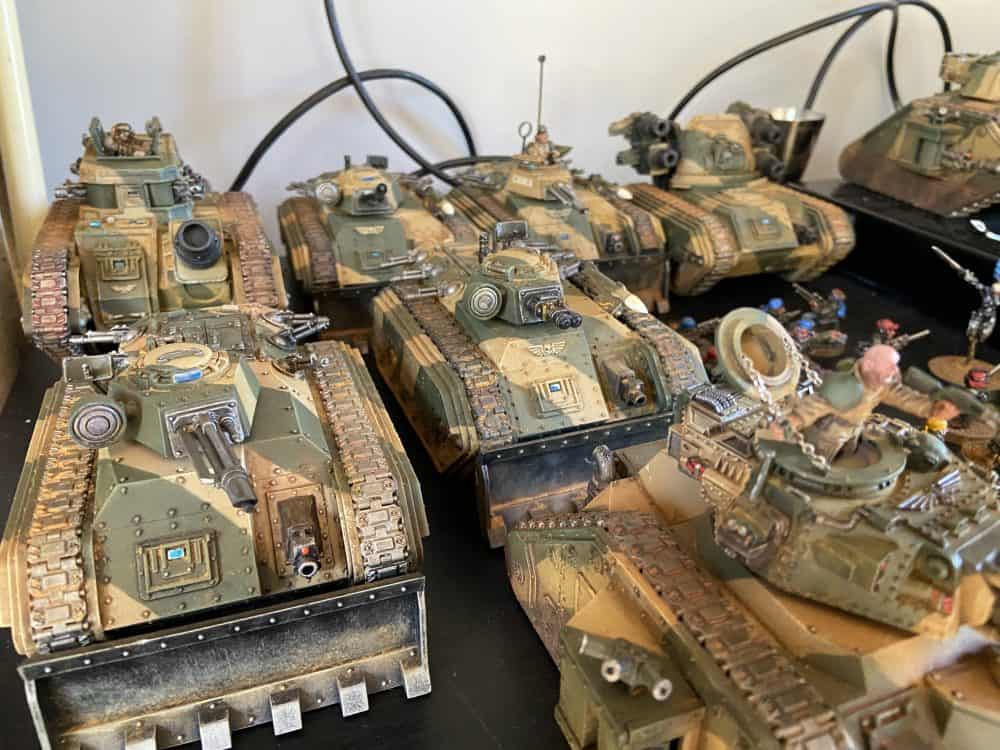 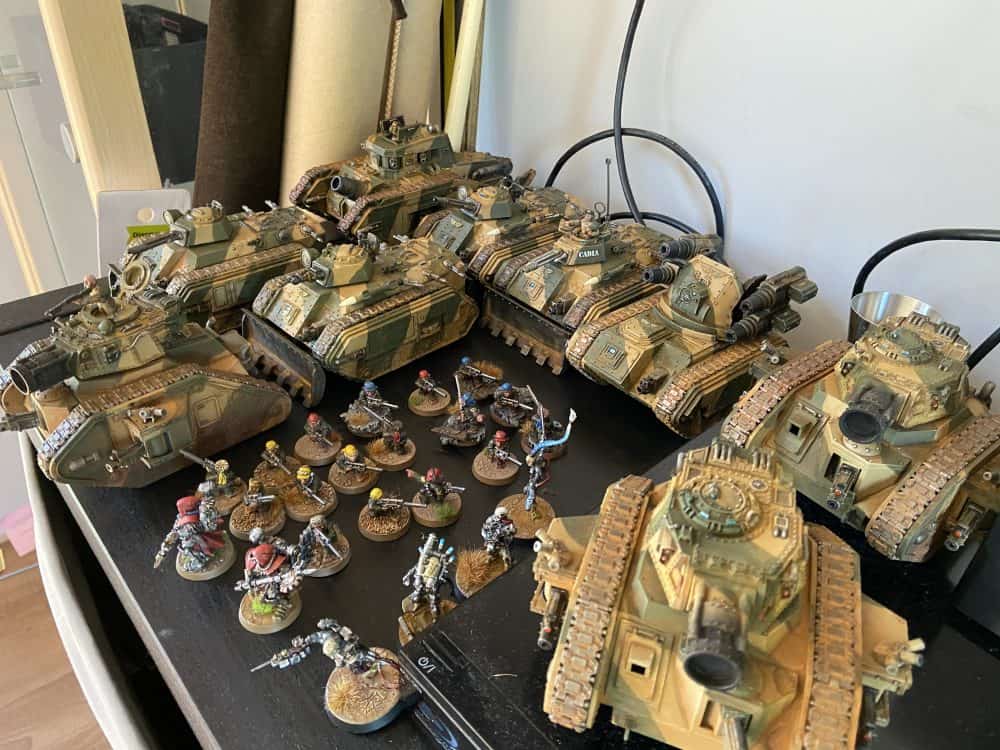 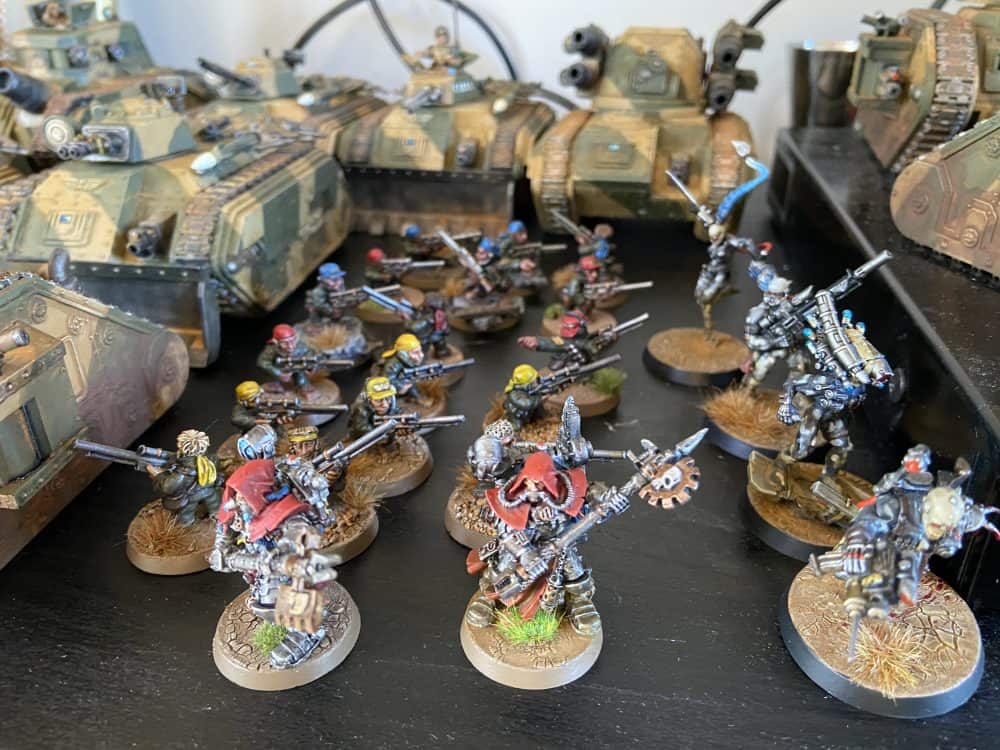 This is as best as I can remember… 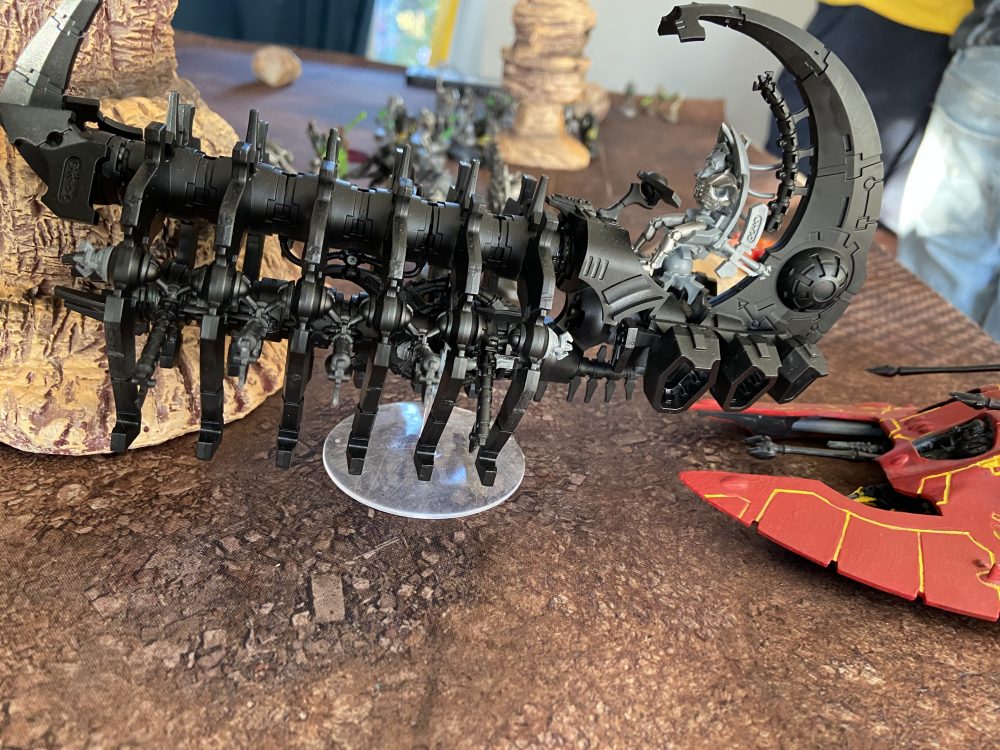 Whenever I use my Chimeras for a mechanised Guard list I am always really impressed with how well they perform for me. They did so against the Astra Militarum in the past too.

And this game was no different. The images below show deployment and then the battlefield after turn 1. My Chimeras have moved up as far as they could on the right flank. The one at the back was on 3 wounds and could not move very far. The one in the midfield was on its middle bracket, so again could not move its full distance. This middle Chimera contained my two Special Weapons Squads of Grenade Launchers and Flamers. After disembarking they killed 16 or so Guardians, the Wyvern then stepped up and killed even more and also reduced their Leadership by a further 2. Thanks so it’s Tank Ace. That was 20 dead Guardians on turn 1.

This meant my 40+ Guardsmen on that side of the board were now free to zoom across and take the objective on that side. In the photo, it’s the red disc under a model in the top right corner. The models on the red disc are Space Wolves, proxied in for Wraithguard. They were the only threat on the side now, other than Asurmen and the Eldar Psyker.

As the game went not to turn 2 and then 3 (sorry no photos), my Guardsmen swamped that objective with 20 models. The Callidus then turned up along with the Culexus in that corner too. But the Callidus died in combat after the Eldar fought first for 2CP! She did nothing! Well, she cost the enemy 2CP.

Without the Chimeras, the Guardians probably would not have shredded them on turn one, because their range is so poor, but they were protected anyway and had a guaranteed movement of 12″. 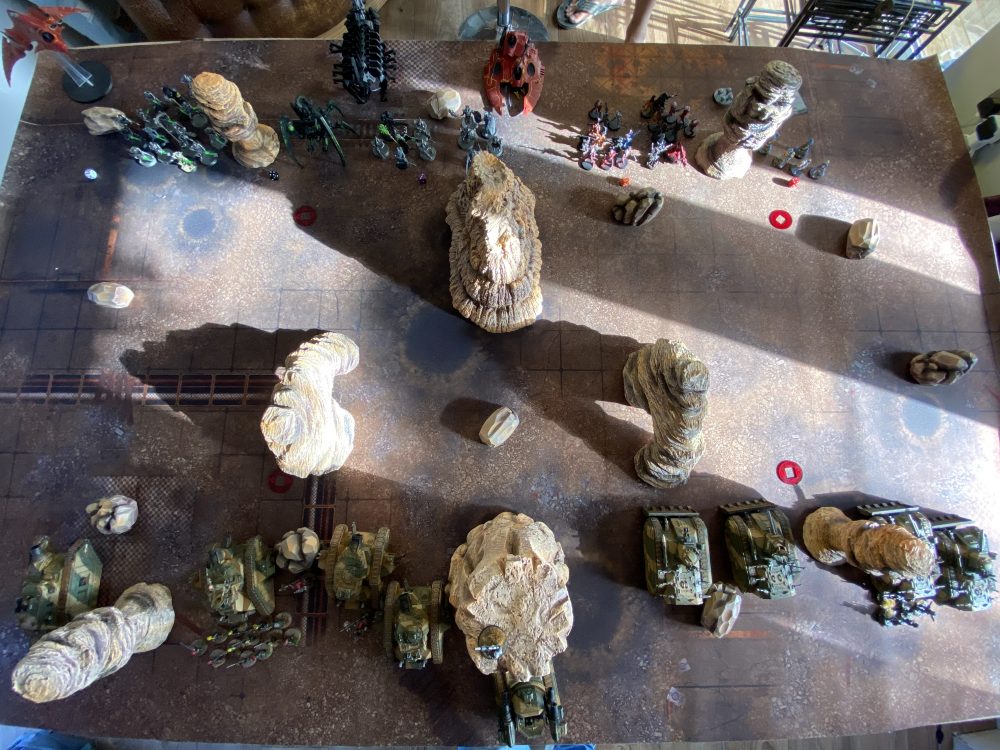 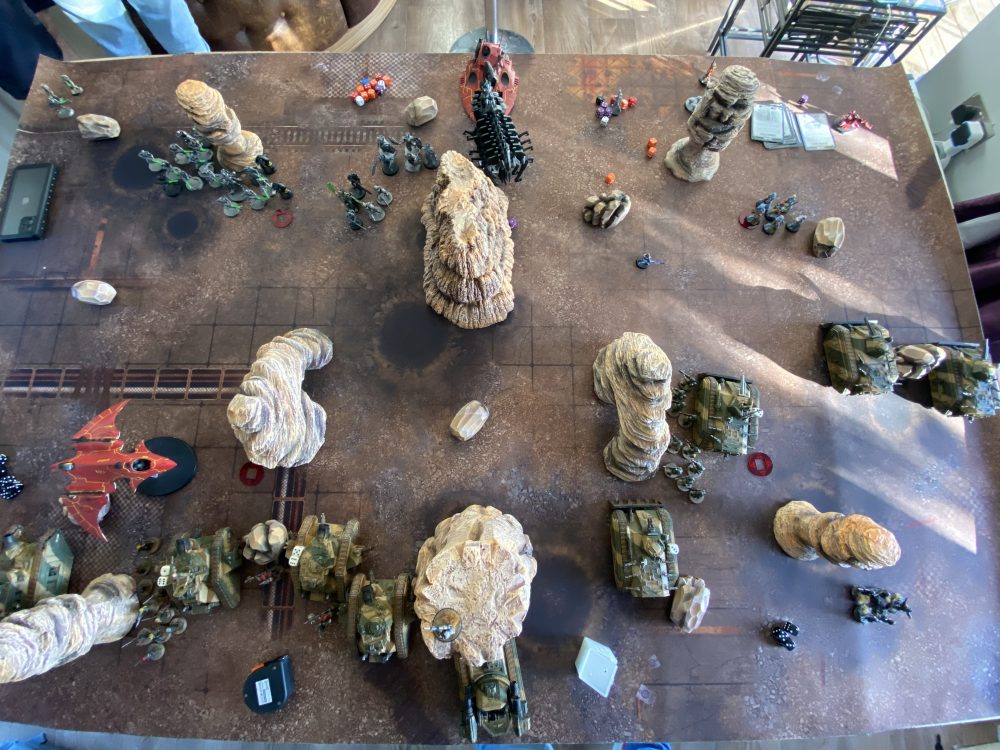 The Demolisher Cannons were really good. But, Quantum Shielding is also really good! I removed the Necron walker on turn one, it took all three Demolisher Cannons though. Lesson learnt! Quantum Shielding is excellent when faced with Damage D6 weapons. The Spotter Details Doctrine was good here too, as it meant I did not need to move to get range from turn one. I could lob shells across the battlefield right away.

On turn two I went for the Doomsday Ark as it was threatening, I took it down to 5 wounds and then finished it off on turn 3. I lost of Tank Commander Warlord on turn 2. He took a lot of pain though from the Deathspinner, Hemlock and Doomsday Ark.

On turn 3 I went for it, I used Hail of Fire (12 shots with Grinding Advance) and the re-roll ones Tank Order against the Hemlock at point-blank range. The plane was -1 to hit. But I inflected 17 wounds on the Hemlock and down it went. Also in turn 3, I rolled 11 shots against the Lychguard, which wiped them from the board.

The Jury-Rigged Repairs Doctrine is really powerful too, especially coupled with two Tech-Priests. You can go from the lower bracket to the upper bracket in one turn.

Finally, the Malcador Defender was OK, again. its always just OK. I think I miss using it. I do not move it as much as I should because of the -1 to hit when it moves (not in 9th though). So it stays in the same place. It should really be just rolling towards the enemy and into their lines and onto objectives. It does not die easily with T8 and 18 Wounds. 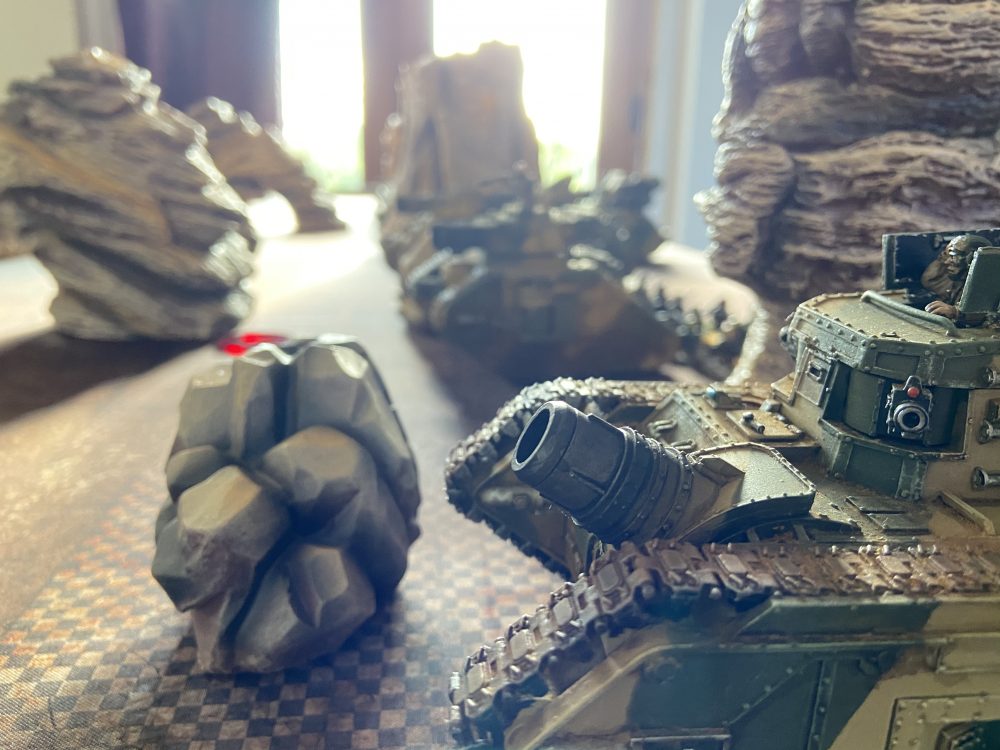 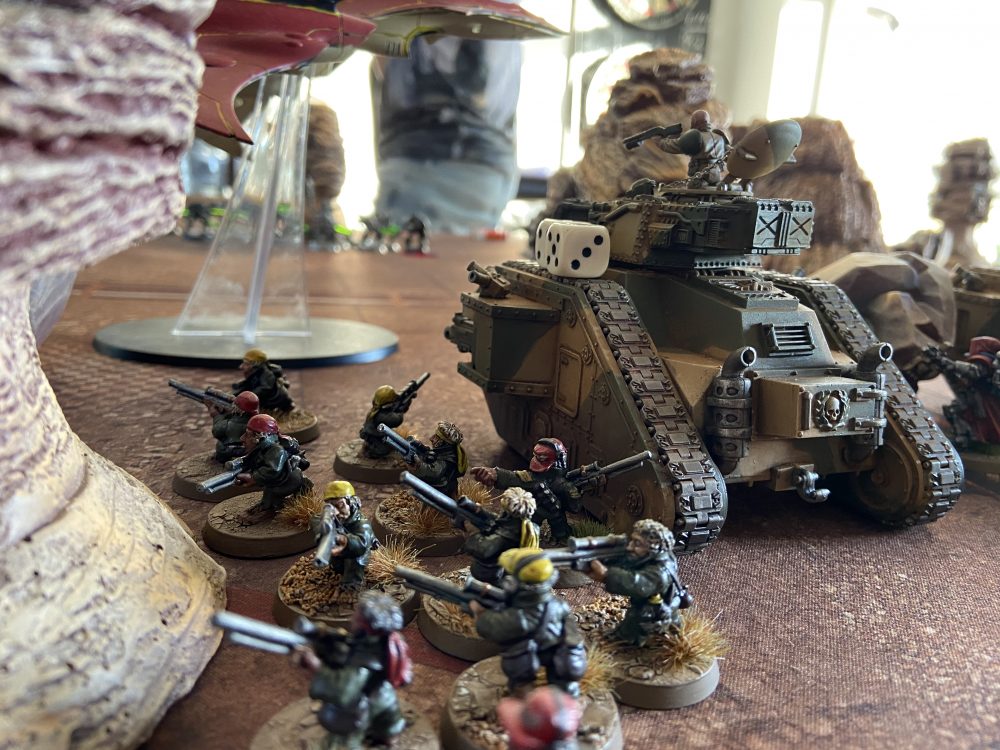 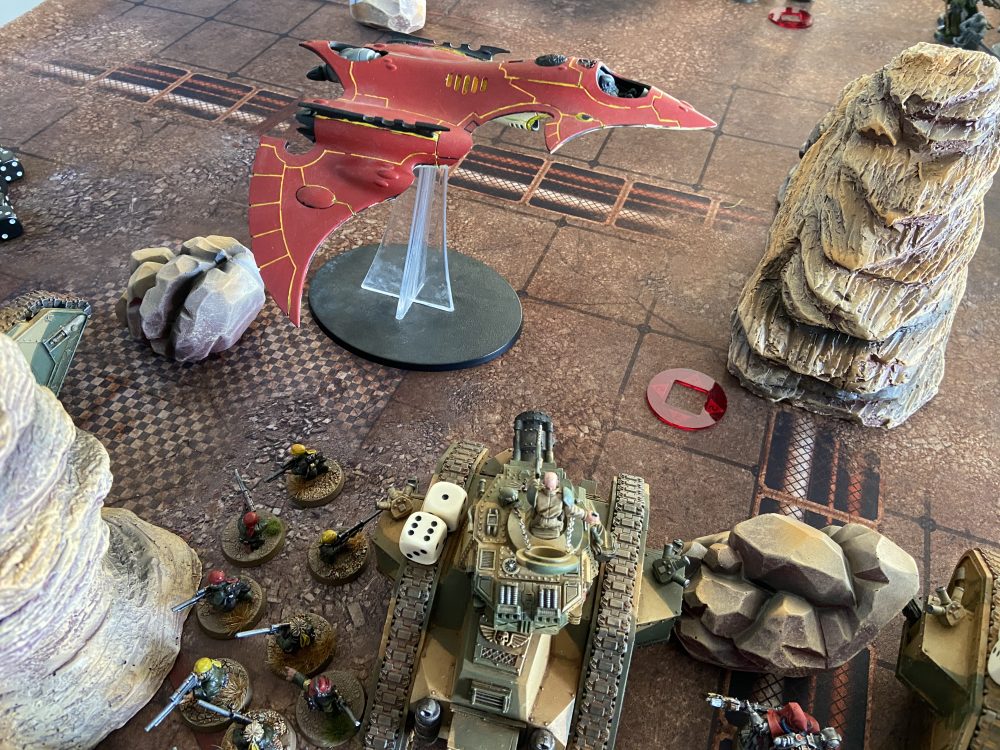 The Assassins all performed very differently. The Callidus, as noted above did nothing and died.

The Vindicare did 3 or 4 wounds to two Necron characters, but he did not deal the deathblow to either of them.

The Eversor did that! He came in and charged the Necron Warriors, killing 5. With the 5 extra attacks that he generated, another 4 died. That was 9 Necron Warriors from one charge. On the second turn he was on the table he finished off the Necron Overlord in combat. The Overlord was on 2 wounds at this point thanks to the Vindicare and Ratlins so it was an easy task for the Eversor.

The Culexus did not seemingly do much. The -2 to Psychic Tests made no difference to the Eldar’s psychic powers and the weapon she wields did not do much.

I would take all four again, and then again and again. I think each has its own place in the battle. Positioning and target selection is key, and getting those two things right will come with practice.

We ended the game on turn 3, as it was late and the Guard was 7-2 up. I had removed both Warlords, the Doomsday Ark, Necron Walker, Lychguard, Immortals, Hemlock and Guardians.

I had also managed to take 3 of the 4 objectives, which gave me a point per turn too. The xenos would struggle to fight back against the remaining 30+ Guardsmen, the Malcador on full wounds and two Tank Commanders on full wounds.