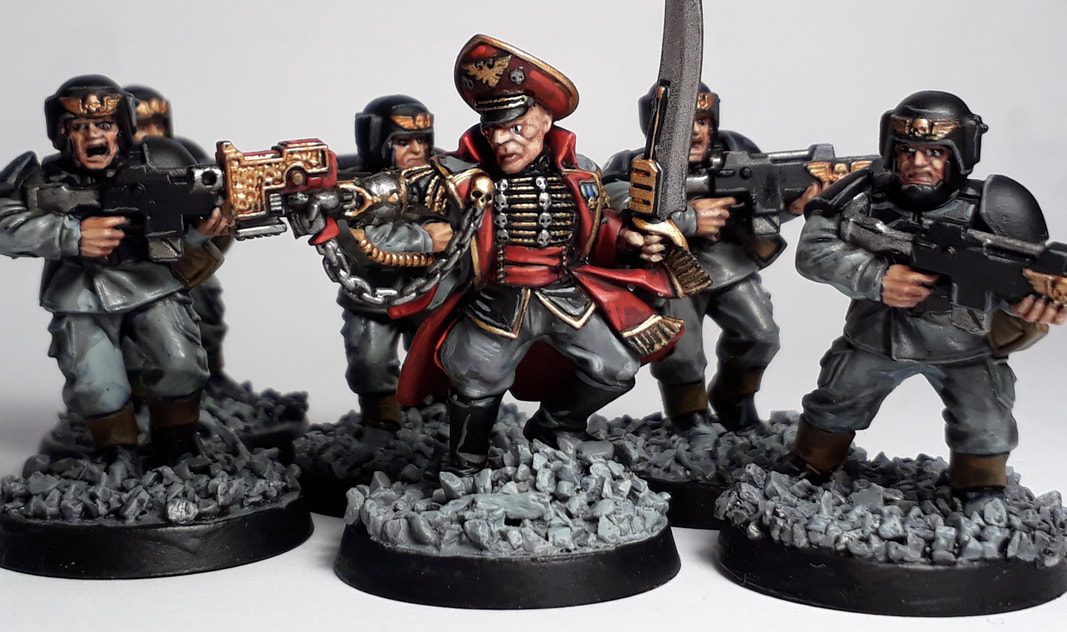 Finally, before we begin with Guard Daddy, if you’re new to the Astra Militarum and/or Warhammer 40,000 – check out my Getting Started series.

Over to Guard Daddy…

In 8th Edition, the ability of any weapon being able to wound anything, meant that infantry vs vehicles and monsters received a massive buff. However, there was no balance to this. Vehicles and monsters did not gain additional bonuses v infantry. This tipped the advantage towards infantry.

Single wound models benefit from wounds not rolling over. Essentially this means the more powerful a weapon is (strength/damage) the less effective it is proportionately at targets made up of multiple single wound models. This is why Lascannons aren’t used to shoot infantry squads.

An infantry list takes these principles to the extreme! An all infantry list effectively makes a large portion of an enemy’s points redundant almost immediately. The targets that multi-wound weapons are good against are protected by the character mechanic, and this is something within your control. The only multi-wound models in an all infantry list are characters. Your enemy cannot easily bring their Lascannons to bear on your Company Commander for example.

Alpha Strike in 8th Edition is very powerful because the rules relating to terrain have changed. ITC standard now has windows at ground floor level block line of site for example. We therefore now see much more terrain on the table. Infantry is much more flexible at: 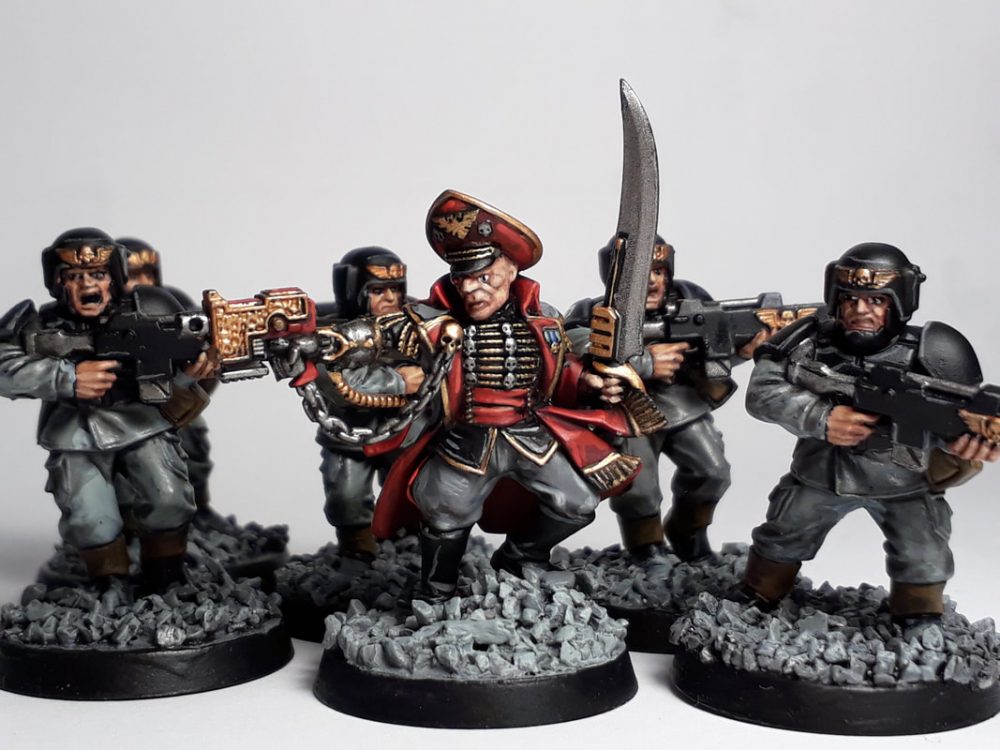 The early dominance of fast-moving Flyer units led to one of the first big changes post-release in the sense that infantry gained objective secured whilst almost everything else did not. This means an all infantry list is at a huge advantage in terms of ob sec during a game.

In 8th Edition perhaps the biggest change has been the introduction of Stratagems. This is where the fluff/feel of an army increasingly comes from. Rather than being written into core rules, players are able to deploy special abilities via Stratagems. This requires battle forged detachments to access additional Stratagems over the baseline 3.

Horde For The Win!

The balance against horde style armies was the new morale mechanics. Armies should melt as casualties become horrific. The Conscript meta that quickly evolved was based on negating this by removing morale with a buff of some sort (Commissars in Astra Militarum armies for example).

However, the multiple small unit approaches (lots of 10 man squads) limits the impact of morale as your losses in a turn. You cannot lose more than 10 in a 10 man squad, no matter how badly you fail morale.

As Guard, we should be able to use Stratagems and psychic powers to save 3 squads a turn (auto-pass stratagem, take morale test on D3 Stratagem, auto pass psychic power) meaning that severe damage to 4 squads needs to be done before morale becomes a significant problem. 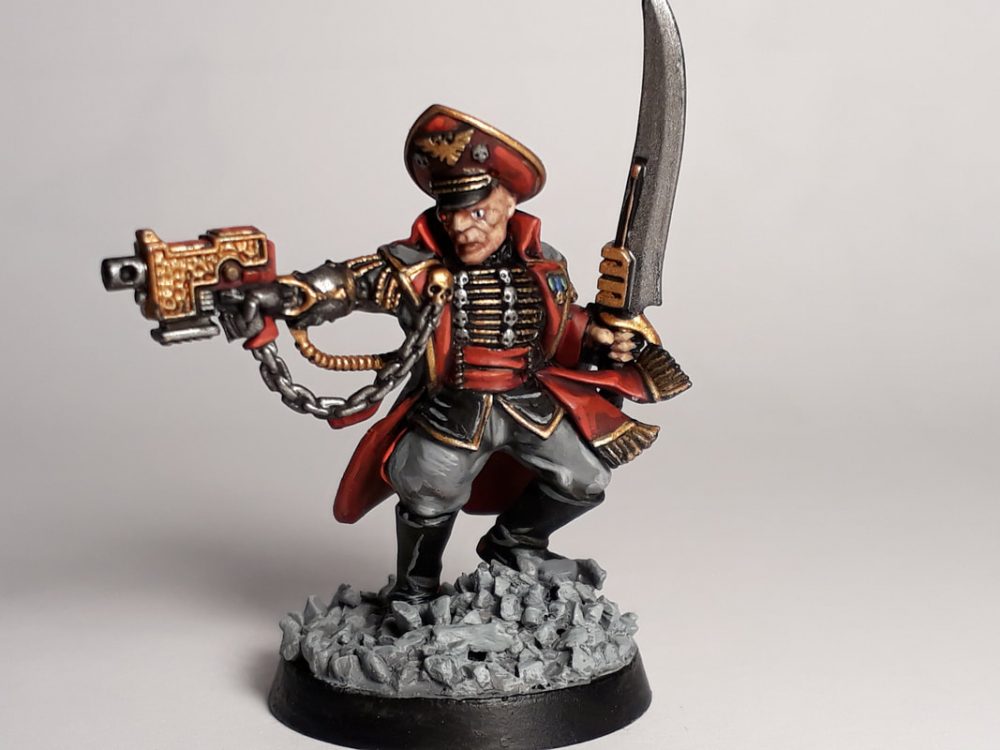 And some final benefits:

Get high damage weapons into Veteran Squads. This gives them protection against enemy power weapons. A Lascannon in a Veteran Squad hits on 3+, re-rolling ones if Cadian. And if you use Take Aim they can re-roll all misses as Cadians!

Mortars are the best, I think, in Heavy Weapon Teams in infantry list. You can afford millions! In addition, indirect fire means they can be spaced out covering the back zone of your deployment area. It also allows you to focus fire with little concern about terrain heavy boards, and they are perfect for hitting the units that are often counter to your infantry (enemy infantry).

With high numbers of units and models, you must exploit this by being hyper aggressive with the front wave of your army. You have two objectives with this. 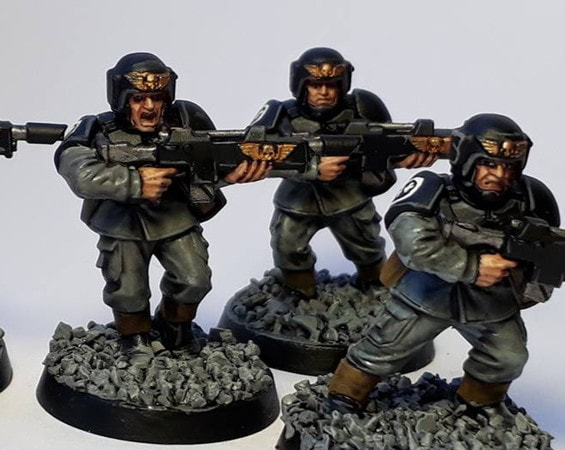 The Vox-Caster is central to this more mobile play style as you want units able to move away from command units if required. Also, this approach brings into play the awesome fluffiness of the Fire on my Position Strategem.

Whilst some armies go all out to minimise drops, the Guard cannot play that game with an infantry list. So we need to maximise the benefits that this offers.

We need to deploy units that are less location dependent first, our goal is to force the enemy to be fully deployed allowing us to concentrate our forces against their position.

Mortar teams, for example, want to be relatively central to your side of the board to allow maximum coverage for their 48” range. By taking five or six teams Heavy Weapons Teams teams can be placed first ensuring enemy has to deploy half army! Then some Company Commanders to order them and a general screen of four or five infantry squads and now your enemy forces are fully deployed. You can then deploy Veteran teams and rest of infantry against their forces as required.

It is very easy to want to put your powerful firepower into big stuff! However, you need to assess what is going to degrade your numbers when making a threat assessment. An enemy that has anti-troop weaponry is a priority. Dakka Pred v Las Pred? – hit the Dakka Pred!

The Walking Dead – 100% walking list! This force will consist of, a Brigade detachment, a Battalion detachment and a Supreme Command detachment.

Slap on Creed for 18 Command Points!

Editor’s Note: This beats my list with 1,000 Point Astra Militarum List with 12 Command Points! Although it is more points of course!

This is the basis of a 2,000 point all Astra Militarum Infantry List. It will give you something to start from with a load of Command Points. The Sentinels are needed for Fast Attack, and they are like infantry, right? They have two legs!

Check back soon or subscribe – because soon we will take a look at finishing off the above basics into a fully fledged 2,000 point Astra Militarum Infantry List.

Astra Militarum Infantry – The Hobby Side

If you go for full priced minis from Games Workshop or even cheaper ones from Element Games or Wayland Games creating an Astra Militarum Infantry List is a daunting task!

Ebay is your friend. I wrote an Astra Militarum Ebay Guide some time ago.

Also painting them ALL can be a nightmare. Luckily I have a guide for that too! Batch Painting! 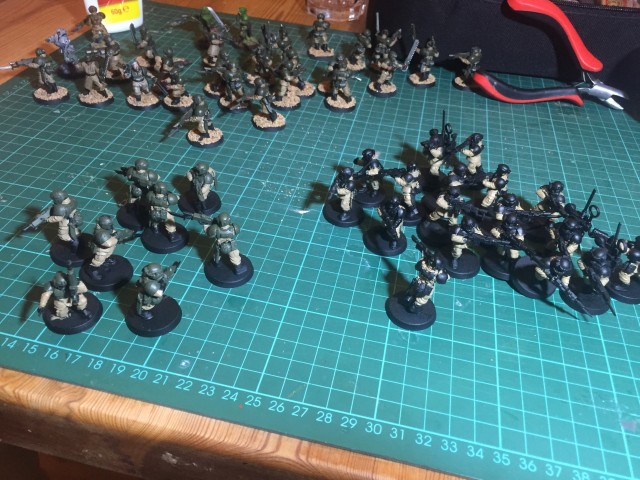