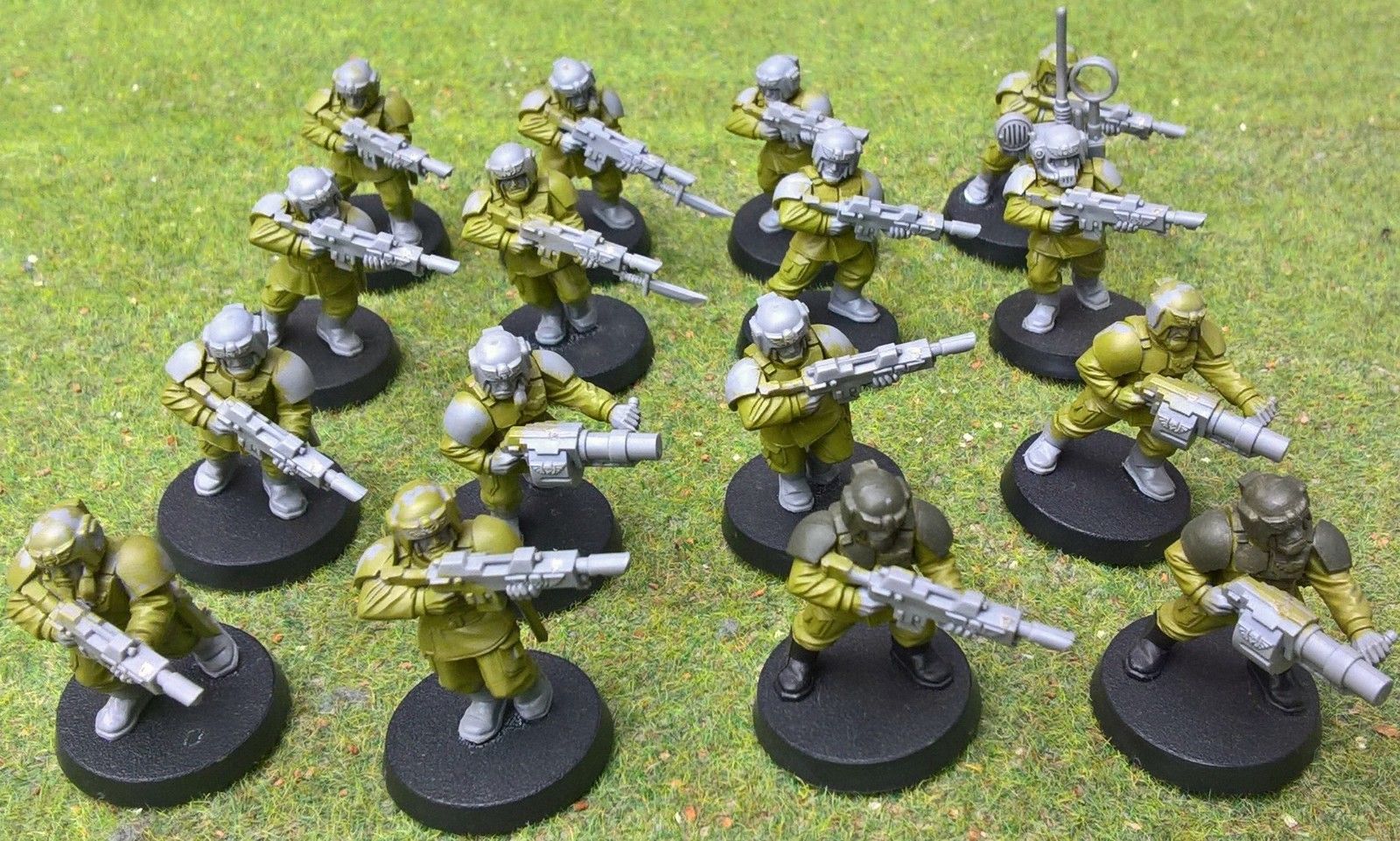 I started this series of articles over a year ago, so apologies if anyone was expecting more content on it and has been disappointed. But I’m back now and continuing on with this series. So please, post your suggestions, comments and feedback. You can find my Overview article and an article about Research on my blog at those respective links. But onwards now with eBay Astra Militarum.

I’ve recently bought a selection of goodies from eBay as has a friend of mine (two Land Raiders for him) so I thought eBay would be a good place to kick things off again. Most people start off with a box of ten infantry I would think, something they pick up when passing by a Games Workshop store or a gift perhaps. So we will assume you have something at this point and now you’re looking at increasing the number of models you have but on a budget. I remember cost always being a huge issue when I first started – when I was about 7 years old. You have to rely on the generosity of your parents for most of the year and then really hit it up big at Birthdays and Christmas! And its not much better now that I am nearly 32!

Of course there are the box sets that Games Workshop does that can get you started with a force of Astra Militarum and these are well known and easy to find. These bundles remember don’t mean savings, they mean “we’ve created this one-click button for £200 worth of models and it still costs £200”. Although admittedly they are much better than a year ago, the Munitorum Armoured Containers: Astra Militarum has a saving of about £10 as far as I can tell. But that still means its a lot of money.

So if you want savings on new models rather that neatly bundled packs don’t go to Games Workshop – go to Element Games or Wayland Games in the UK or Frontline Gaming in the USA.

Or as mentioned earlier, eBay and eBay will be our focus today. I’ve had great success over the years with eBay. I feel like Astra Militarum is a good force to build up from eBay as it tends to be a horde force and so you’re less precious about the quality of the models and more bothered about the quantity and not spending £100+ on an Infantry Platoon of regular guys.

A Note About “Quality”

That isn’t to say that the quality of Astra Militarum models is bad on eBay or any other second-hand source. It just means that if they are built already then the person building them may or may not have attached grenades to belts, water bottles, ammo packs, based the model with sand, grit, or grass, etc. They just might be inconsistent when compared to each other and when compared to your existing models. But with a bit of work they can be brought back into line or used for differing Platoons or Conscripts.

Of course, there are some absolute car crashes on eBay. Like the Leman Russ I once saw where none of the panels had been glued flush together – it really did look like a car crash. Perhaps it would be a good start for an Ork Truk?

Even on the auctions that look good, you can sometimes find the odd duff model. Like the time I got a Flamer Guardsmen which 8 grenades on his belt and grenades in one of his hands! It was not ideal, but it was fixable and a lot of the time the issues are so minor that in a Platoon of 50 men you simply won’t notice. 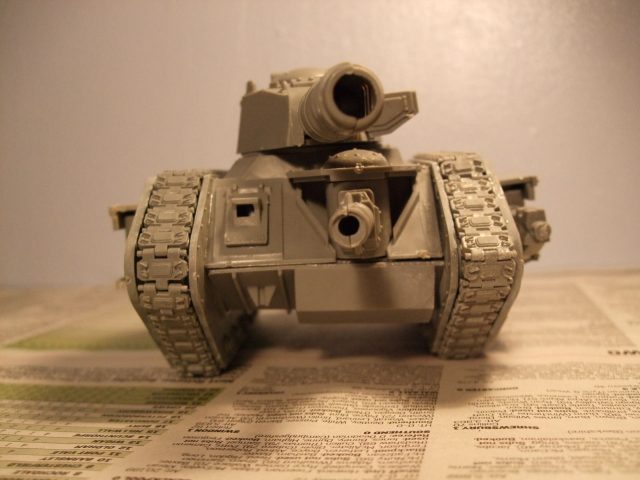 Thanks to David M for pointing this out in the comments; but special weapons are harder to come by on eBay, especially in this job lots of models. And if you do find them then those auctions will go for more money or the Melta Guns and Plasma Guns will be taken out and placed in a separate listing.  But you can often find Flamers and Grenade Launchers in with groups of ten Guardsmen.

How Much Can I Save?

Buying Cadian Shock Troops from Games Workshop new costs £1.80 per man, £1.53 from Element Games and £1.44 per man from Wayland Games. I’m sure there are other discounted independent stores elsewhere in the world but these are the UK based ones I’ve used. These are new models so you’ve got all the weapon options available plus the assembly process to complete.

I often buy built infantry on eBay as they are cheaper and if you check them over first in the images you can usually tell which auctions to avoid. This way you don’t end up with any absolute abominations that should probably be cultists rather than Guardsmen. Buying built can be a big deal (in a bad way) for some people either because they love construction or perhaps they want certain poses or don’t want someone else’s old models. I don’t mind them. I recently got 43 Guardsmen for £44.50 including postage which made up £3.95 of the total cost – that’s £1.03 per model. A 57% saving over Games Workshop prices and across a 55 man Platoon I am saving about £56 if I keep up that rate of saving. So if you’re horde-ing up and swelling the ranks then eBay is a good bet.

Painted models I avoid, even if they have just 3 or 4 colours. These will need stripping if you’re to repaint them and not lose any detail. But 1 or 2 colours are fine and can be easily painted over without fear of losing detail. Plus those colours can often be complementary to your final colour pallet, e.g. greens and khaki colours – so they are not too hard to cover over. I wouldn’t buy bright red Guardsmen!

Some examples are below taken from eBay which should give you some idea. Having an airbrush helps slightly as it allows me to prime models with very little paint, rattle can paint are awesome (I use them a lot) but if you want a fine layer to cover existing paint then they might be too aggressive with their paint load. 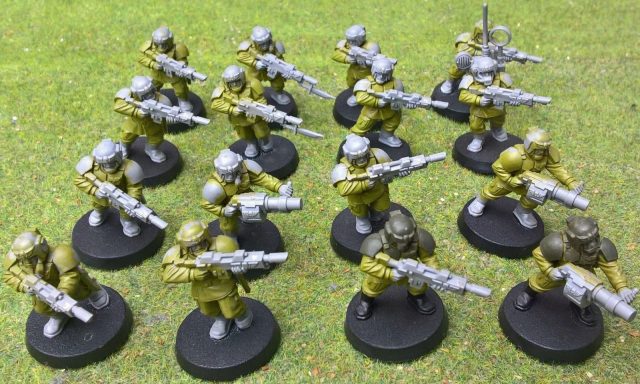 These models have some paint but not much, they’re ideal for me 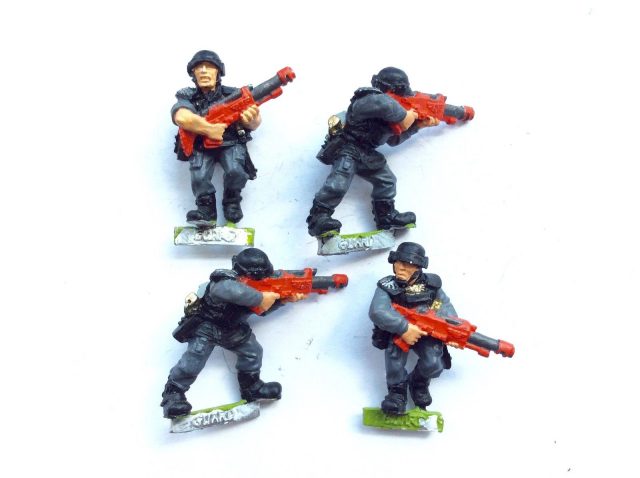 These models have multiple colours and multiple layers, I avoid them

I will purchase primed minis after some inspection of the photos. If they have been primed badly or multiple times then detail will be lost and I would avoid them. But generally primed white or black if fine for me.

The models I bought recently as mentioned above were all primed white or black more on this later below in the Dealing with Existing Paint section. Some were naked too! 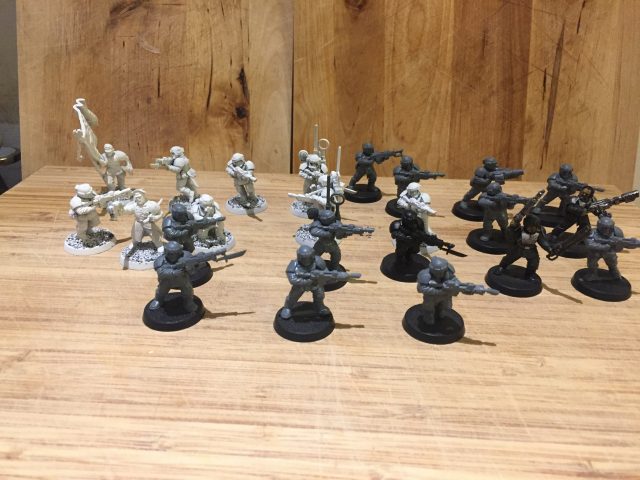 Yes, a thousand times yes. Naked models with no paint are great. No need for assembly and you can prime and paint with no worries at all. Searching for unpainted on eBay though is had work. As lots of new listings are shown. Once you have them its often just a case of removing mould lines and excess sprue and you’re good to go!

I use the same buyers because you can go for several lots, win them, combine postage and save even more. The postage is the killer on eBay because if you win a squad of ten the postage can often be £4 plus which makes up a large portion of the cost. So your “cheap” £12 squad of ten Cadians from eBay now costs you £16 including postage and all of a sudden a new box for £18 from Games Workshop seems pretty attractive. By bidding on items from the same seller you can combine postage and reduce the costs massively.

If you’re going down the reduced postage route then work out what you want to spend and bid that amount just before the auction ends, perhaps within 2 minutes of it ending. Do this for all the lots you’re going for. Because you’re getting reduced postage you can afford to go a little higher than you normally would for something with £4 of postage added on top as you can spread that £4 out across several items.

So, to find the items you want, decide on a price for each and bid on them just before the auction ends. But commit to buying them even if that means increasing your bid on one or two of the items.

You want three auctions of 10 Guardsmen, you decide based on the imagery you will pay £13 per 10 models plus £4 postage for the whole lot (which the buyer has agreed to). That means you’re willing to pay £1.43 per model.

It’s also worth searching around too and looking for other sellers outside of the normal Power Sellers on eBay, like those mentioned above. You can often find someone selling their collection in several lots. If you can find these lots then view all the seller’s items – you’ll see their whole offering and be able to bid on all the auctions. Just make sure before you bid to check that they’ll give you reduced postage for multiple items. I know I wouldn’t want to give a reduced postage for multiple purchases of Baneblades! I have seen a few of these sellers recently, people just clearing out their collections and there are some bargains to be had so keep searching eBay for Astra Militarum.

Finally, try out Fat Fingers. This is a service that searches eBay using typos. This is great as the listings with typos are often undiscovered by the masses so sell for a lot less. And guess what, its dead easy to misspell all of Games Workshop’s names! This approach is not always fruitful its worth doing and saving the searches to hit up at a later date for example;

So my recent purchase of 43 Guardsmen was a nice boost to my ranks and they are all decent condition. Some are primed in white, some in black and some have a couple of paints already applied – but none are fully painted. These are a fine addition for me, but I understand that people only want naked or new models. 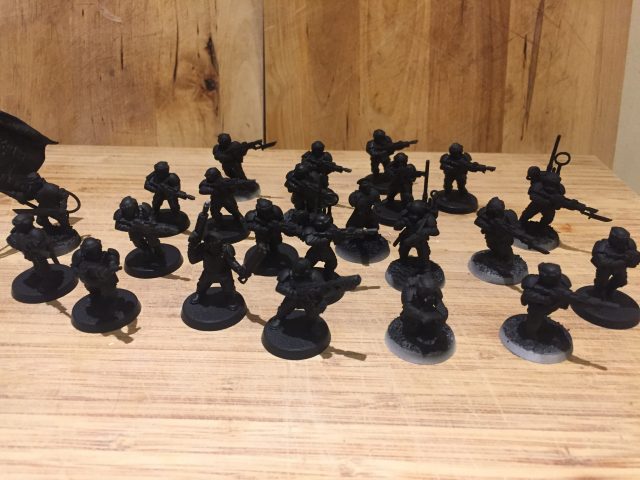 Even the two painted guys from my pic above turned out well after a light prime. 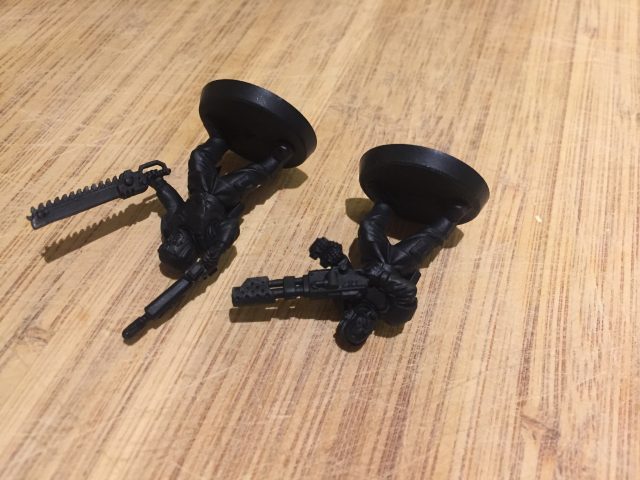 So some points to remember when using eBay for Astra Militarum;