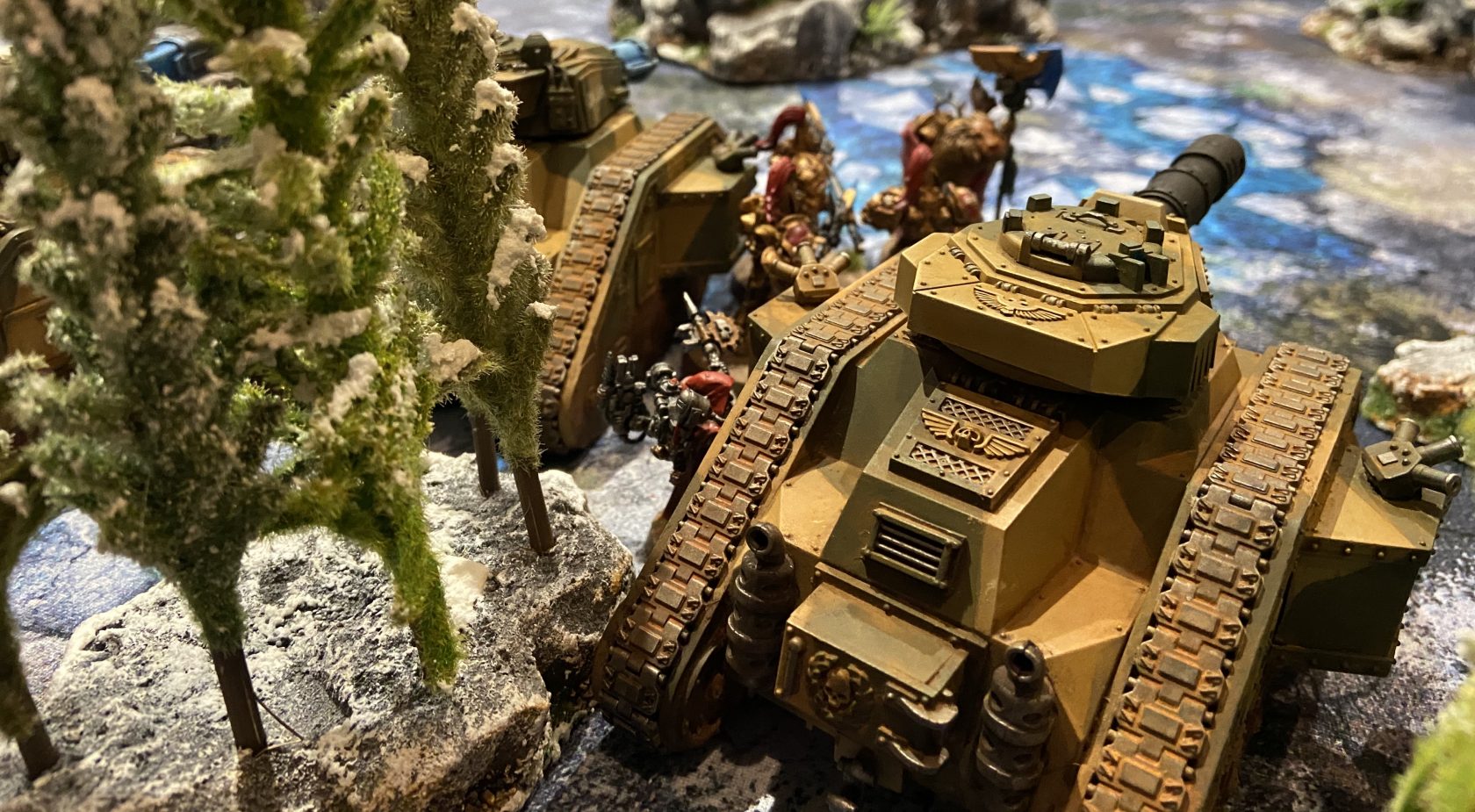 I have another narrative mission for you today...

I have another Vigilus Narrative Mission Battle Report in this article for you. My last one was great fun against the Ad Mech. This game is using the AMAZING Gardbuk Shrine snow terrain from Studio Level. This game is against Greg’s Alaitoc Eldar.

For this Vigilus Narrative Mission I went for Cadians and Custodians – something different from the masses of infantry I have been using recently against the Death Guard and Orks.

This gives me 8CP.

So I was the defender in this mission – we rolled for a random mission and then rolled for who would be the attacker and defender.

The table centre is the key here. Basically whoever has the most Power Level of units within 12″ of the centre wins a major victory. If the Power Level is equal the defender wins a minor victory.

I deployed first – but I could only deploy up to a third of my total Power Level within 9″ of the centre of the table. I chose…

The Eldar could then deploy up to 12″ onto the board from either end of the table – using the short edges.

My other units wouldn’t arrive until turn two and even then would only appear on the roll of a 3+. Everything auto arrives in turn four. These reserves deploy within 12″ of the long table edges and 9″ from enemy units. 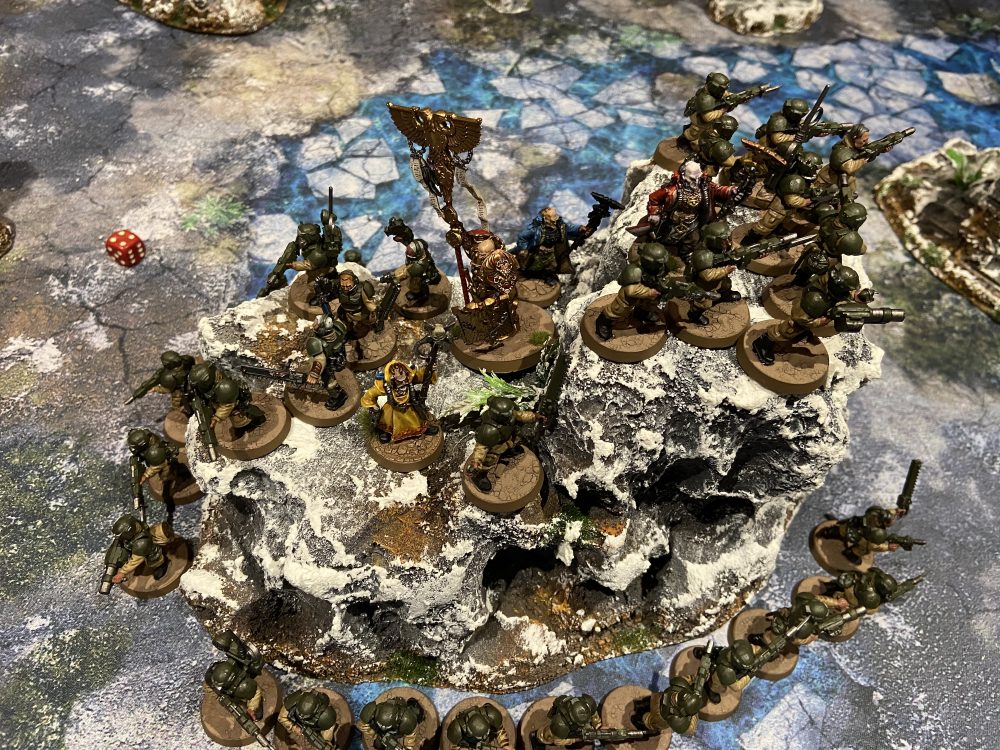 So this is going to be interesting…

The Eldar move in towards my central defensive position and the Psychic phase starts. The Eldar fail their first power and then attempt the same power again – which I am sure you cannot do now. once you fail a power, it has failed for everyone for that phase. But Greg plays a lot less often than me, so I let him go ahead and this power happens causing some Mortal Wounds to the Vexillus Praetor. Now then, this is a Narrative Mission so maybe that is allowed – using the same power twice. Although we never said we were using Narrative or Matched Play rules specifically – it is Matched Play really because we limit Stratagems to one per phase for example.

Anyway, the next power goes off and finishes off my Vexillus Praetor. Bye-bye 5+ Invulnerable Save for all my infantry. Now I have all my infantry in the open basically waiting to get shot off the board.

This happens as expected and I lose all my infantry over the first two turns.

My first Psychic phase is fairly poor as is my shooting which has now been diminished somewhat! I do a few wounds to the Avatar maybe and that is about it.

All my infantry die in the Eldar’s second turn and they consolidate onto the objective in the centre. 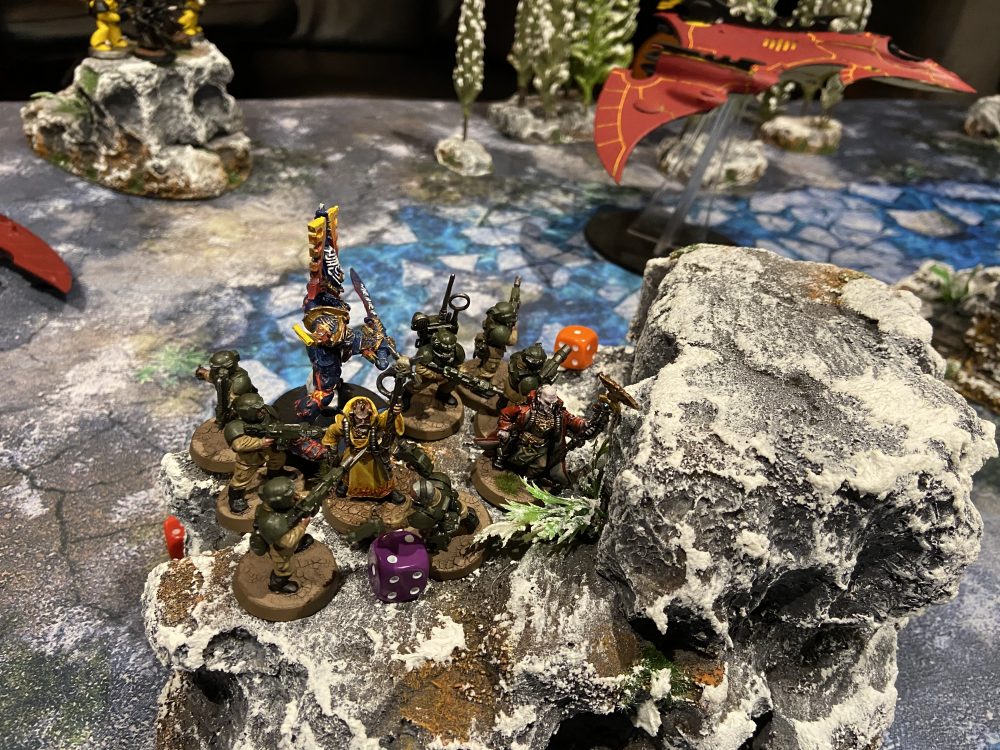 All that remains after turn 1

On my turn 2, my reinforcements can arrive. I roll for the two Tank Commanders and both arrive. I spend a single CP to pass the roll for Pask. I then make every single one of the rest of the rolls which brings on…

The Hemlock and Wave Serpent (containing the Fire Dragons and Dark Reapers) are both on one side of the battlefield so I opt for the other side. My reinforcements roll on and all the tanks pop smoke and shoot. The Rangers die along with the Avatar and all the Warp Spiders. This places a fairly sizable hole in the Eldar forces. 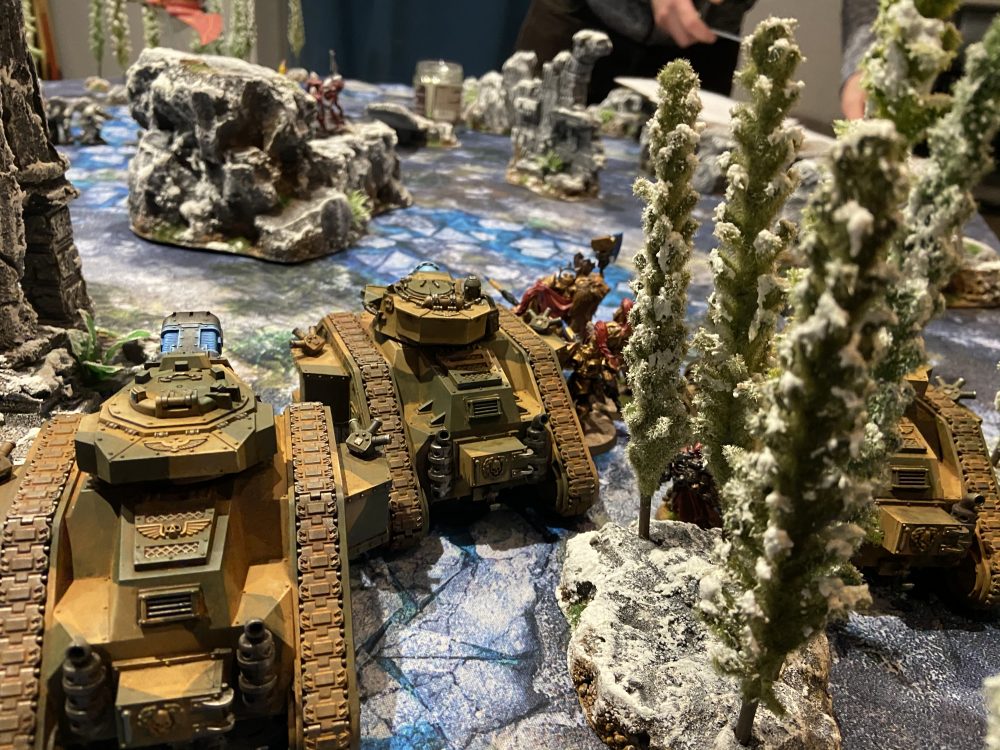 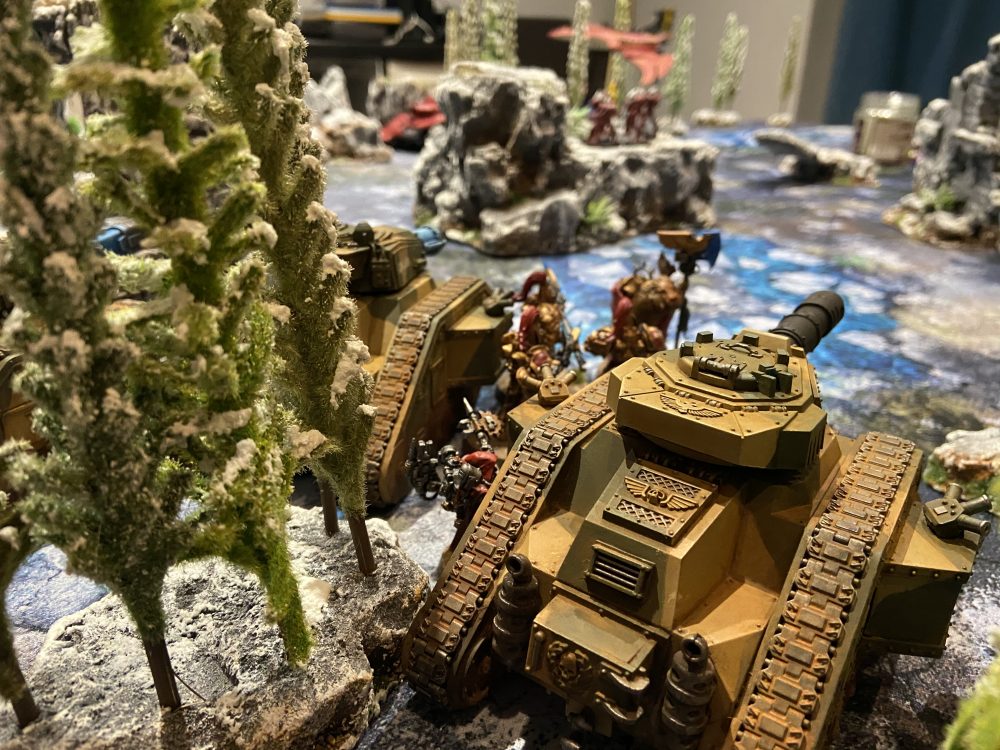 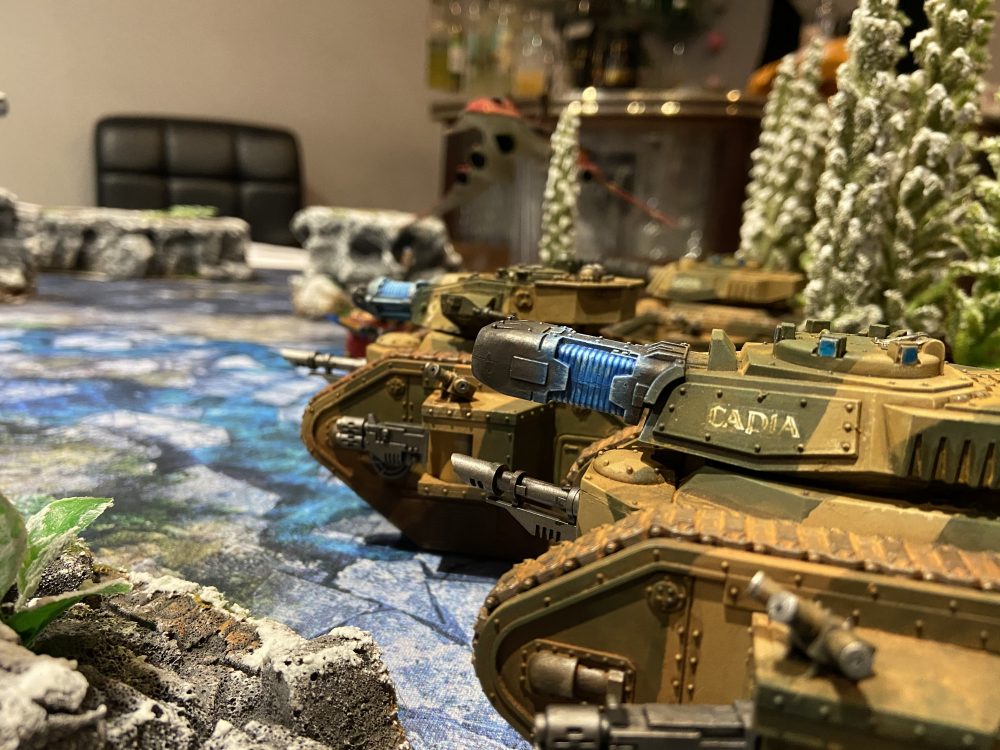 The enemy screech across the battlefield to deal with the new threat. The Hemlock Fighters comes in close to Pask and the Wave Serpent moves to the centre – but not before letting out the Dark Reapers and Fire Dragons.

Pask takes six wounds in total from the Dark Reapers and the Hemlock Fighter – I was lucky there. The Guardians opened up into Trajaan hoping for 6s – but failed terribly and did just one wound. 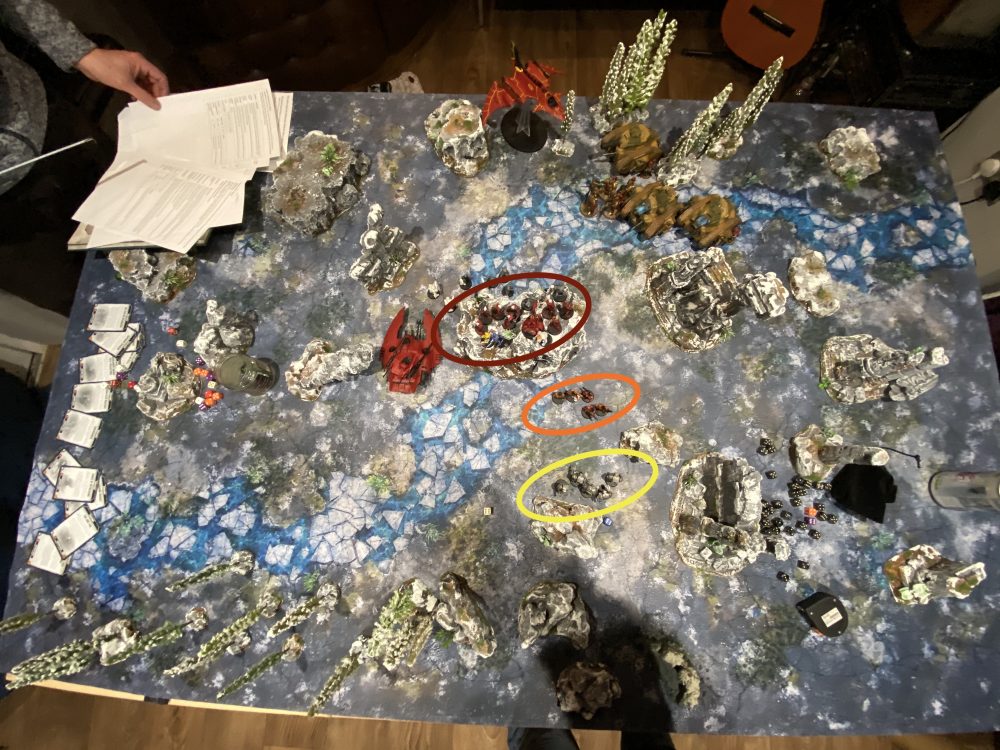 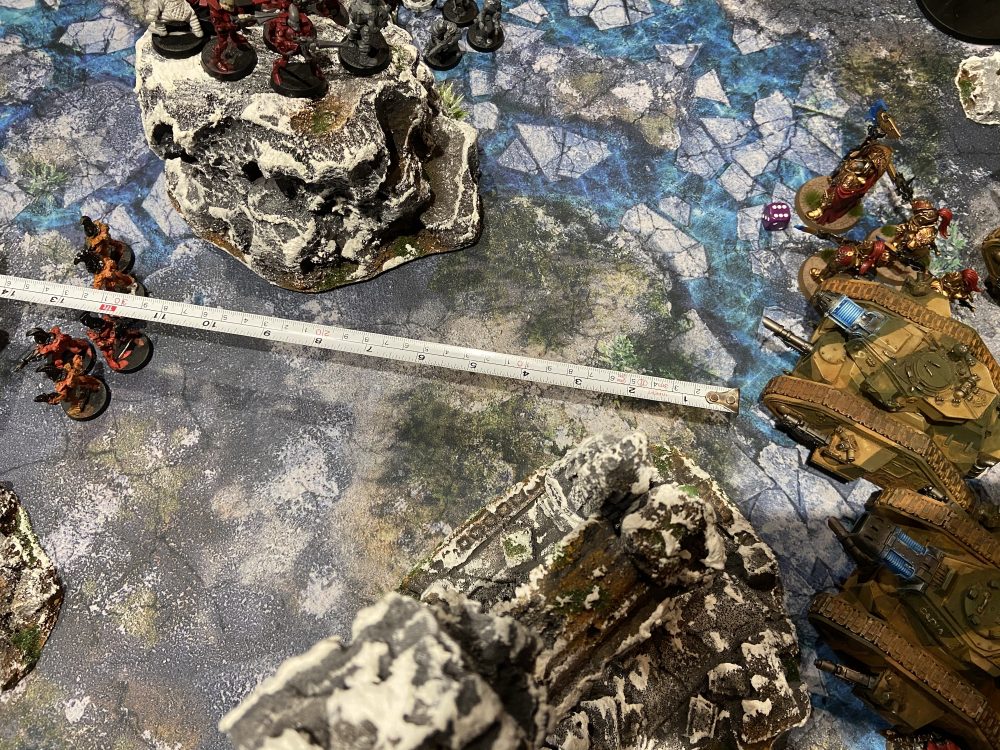 Fire Dragons out of range

I moved the Custodians up to get into combat with the Guardians and the Leman Russ all stayed stationary.

A Tech-Priest repaired three wounds on Pask – which was nice. With the Hemlock so close it was taken down with the Multi-Meltas and three wounds were shed off the Wave Serpent. The Plasma was split up and removed all but one Dark Reaper and all the Fire Dragons. I was not into the centre yet and onto the objective but I was making good progress in blasting the Eldar off the board. 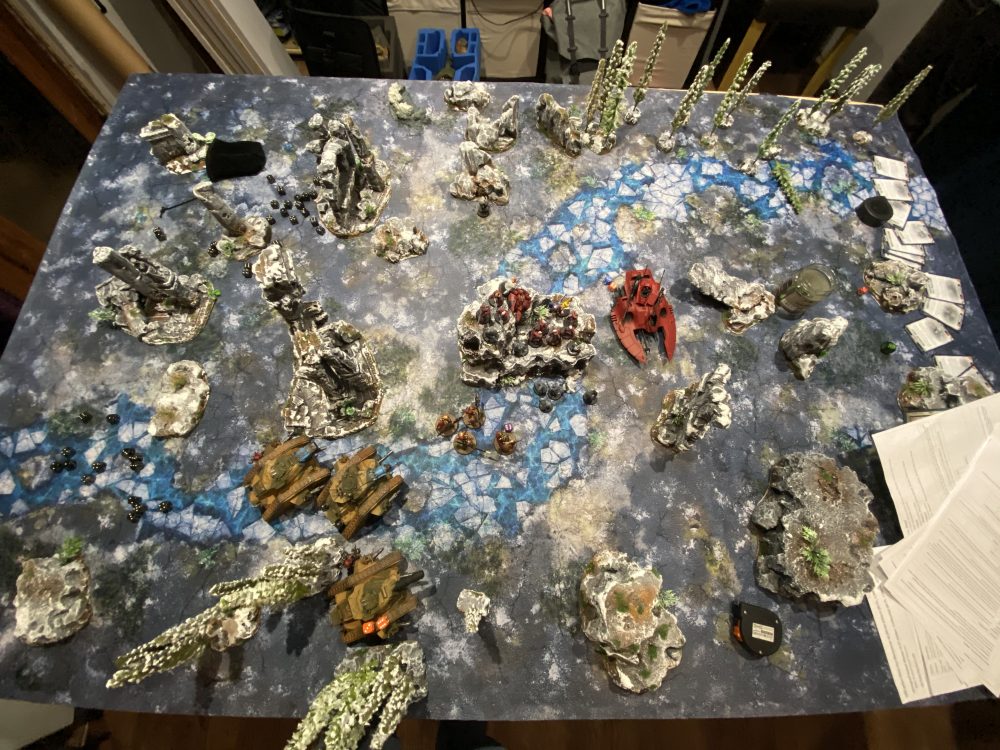 This was the final turn to see what the Eldar could do to remove as much of my remaining units as possible to reduce the number of Power Levels I could get onto the objective. Absolutely everything went into Trajaan who eventually died as did a Custodian. But with all my Leman Russ left and the Custodians still on the battlefield I had enough to take the objective and also – probably – table the Eldar.

This was a fun game and the outcome swung from the Eldar and then back to me. I thought I had had it on the first turn when I saw my 5++ disappear before even the first Shooting Phase.

Perhaps not allowing the Fire Dragons to retrospectively Advance was harsh as it removed all the anti-tank ability of the Eldar. But then all my staying power for my infantry was removed on turn one from a doubling of psychic powers.