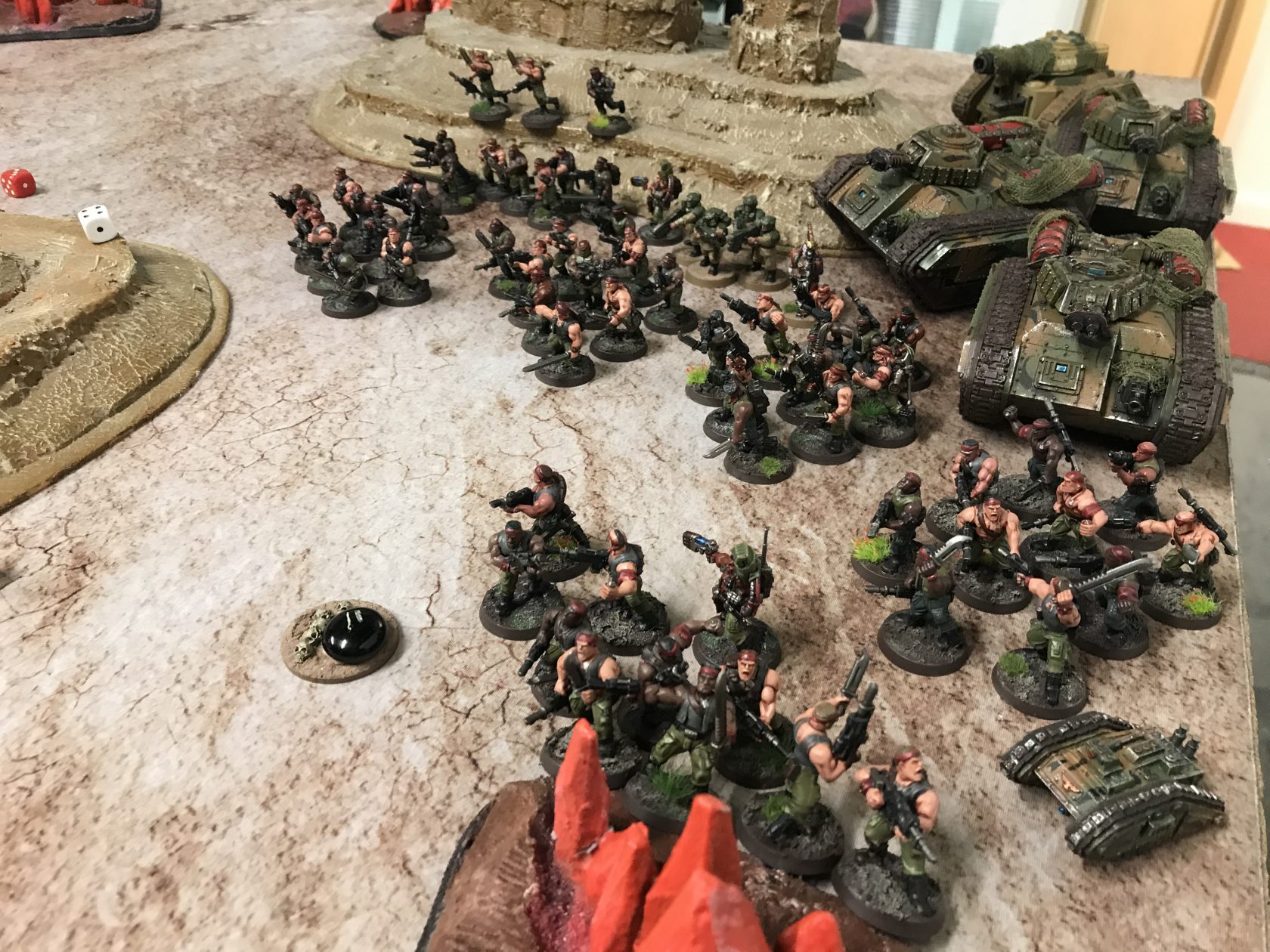 Something new today; my Catachan and Raven Guard take on the Death Guard...

Today we take on the Death Guard at Boards and Swords using a new style of list, Catachan and Raven Guard.

We rolled Beachhead – again from Chapter Approved 2019. One objective is in the centre, then each player places one objective in their deployment zone.

Your score VPs at the start of each of your turns starting from turn 2. 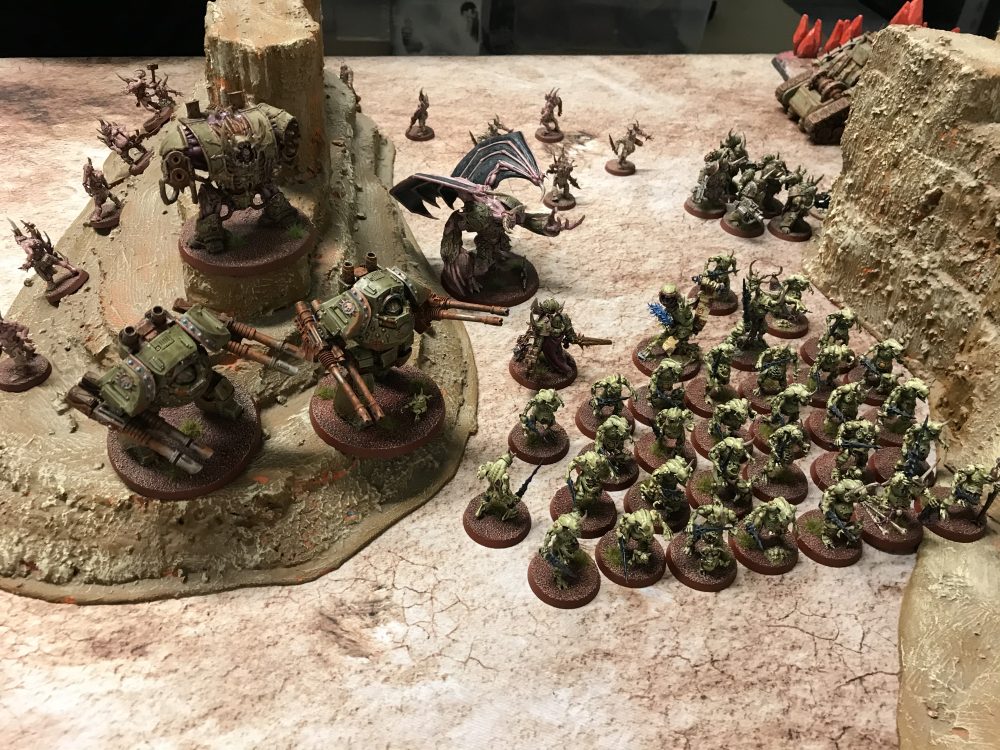 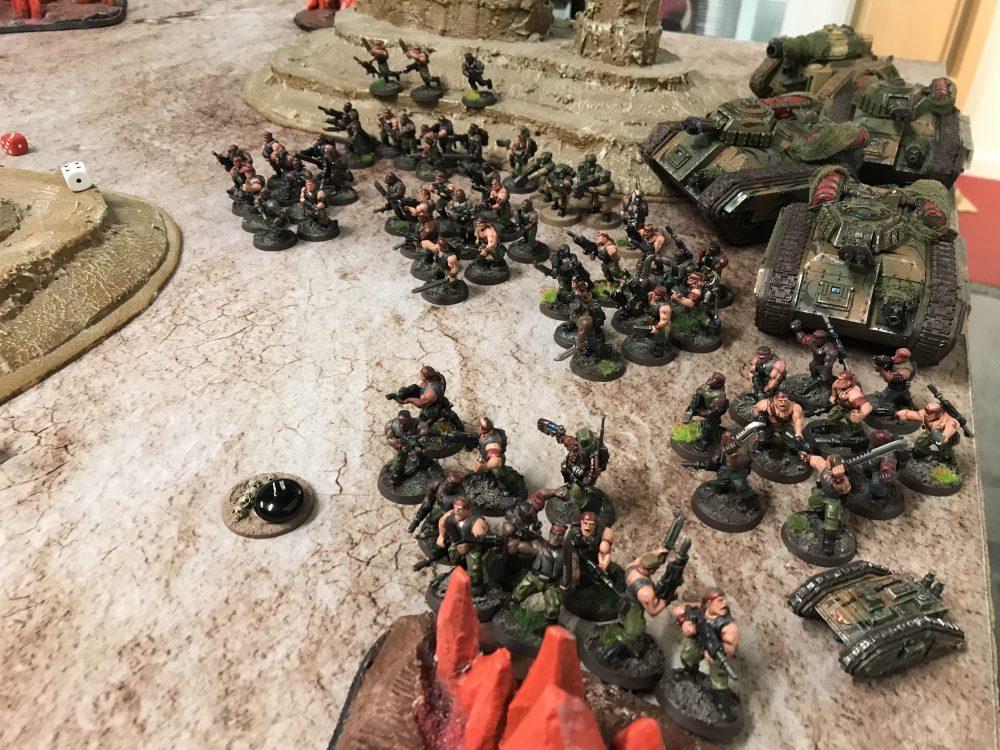 You know you have those games where your list was thought out but then it just didn’t do as it was supposed to on the tabletop – this was one of those games.

You know you have those games where you forget all the tactical thought you put into your list – this was one of those games also.

You know you have those games where something is low risk but high reward, but it flips and it turns out to be high risk and no reward – this was one of those games as well.

The game was a disaster for me from start to finish. We ended it in turn three. I would’ve been tabled on turn four.

Had we continued to turn five the score would have been;

So the idea of the Raven Guard coming in and saving the day is rather romantic. It just did not happen. I brought them down in three different places. Two units on my Objective to try and take it back from the 30 Plaguebearers that were on top of it and then Shrike with another unit into the enemy’s back lines to try and take out their warlord and maybe from them from their own objective.

Shrike and his group failed their charges. Even with the re-roll.

The other two made it into the Plaguebearers but just did not deliver. The Plaguebearers were -2 to hit, 5++ and 5+ Disgustingly Resilient. So even with Lighting Claws flashing (and fighting twice thanks to Honour the Chapter) and Power Swords, I killed maybe six of the Plaguebearers.

Shrike did not die after the Death Guard shooting though and did go on to take out the enemy Warlord after dealing some damage with his Blackout pistol and then finishing him off in combat. That was on turn 3.

I think in the future, especially against a force that comes towards you, the Raven Guard need to be deployed and not placed into Deep Strike. I can use their Fly ability a lot better in this case – getting them up and over enemy units. 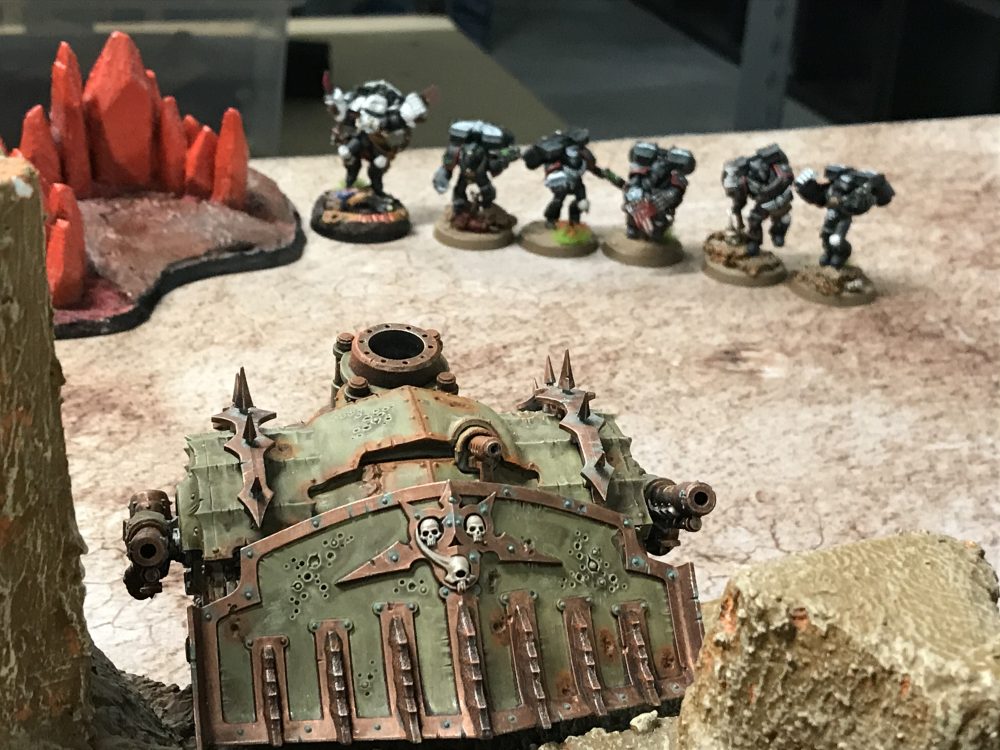 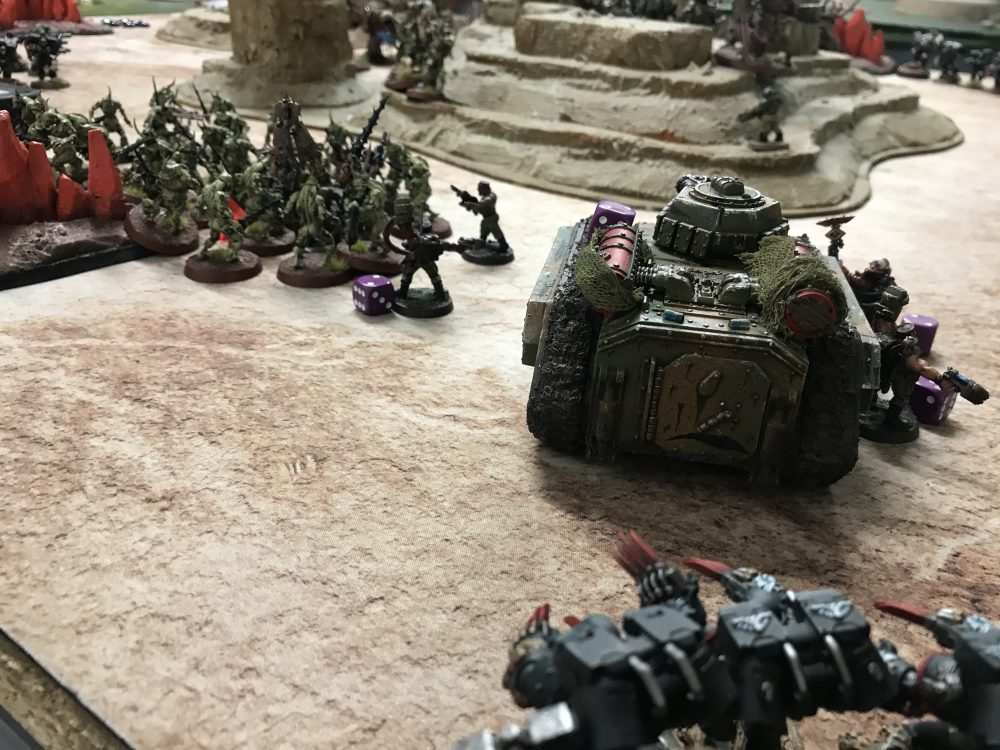 Raven Guard arrive to save my objective

I did not throw my Hellhounds forward as I had wanted. I made them stay back and away from the huge blob of Plaguebearers. This was a mistake because all their Mortal Wounds when they go off (on a 4+) dealt damage to my units. D3 damage is a lot against a squad of already withered Guardsmen or Guard Characters.

The one Cyclops I set off was awful too. I rolled a 6″ for range and had already used my re-roll that phase for a Lascannon on the Tank Commander. This was bad as a lot of my stuff was 5″ away. A risk and very little reward. It did not kill the Nurglings on my objective.

It did kill Guardsmen, dealt damage to a Hellhound and killed both of the other two Cyclops. 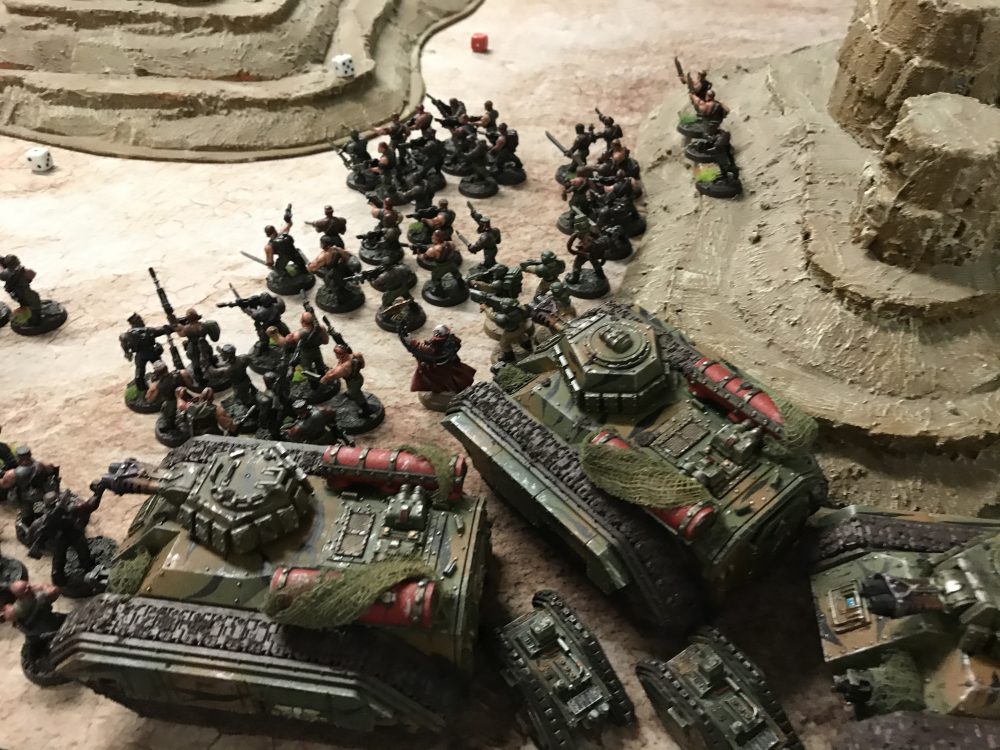 I had massively messed up the placement of my objective. Instead of placing it way back in my DZ – I placed it nearer the middle so that I could get both mine and the centre one with ease. This was a mistake as that task is accomplished a lot more easily by the Death Guard. Plaguebearers onto mine and Plague Marines on the centre objective. They are very hard to shift off and my Guardsmen are very easy to shift off.

I should have stuck with the normal Guard plan of castling up and placing my objective in my DZ. My Leman Russ could have just sat on it and then everything else could have gone forward to get the centre and slow the enemy advance. 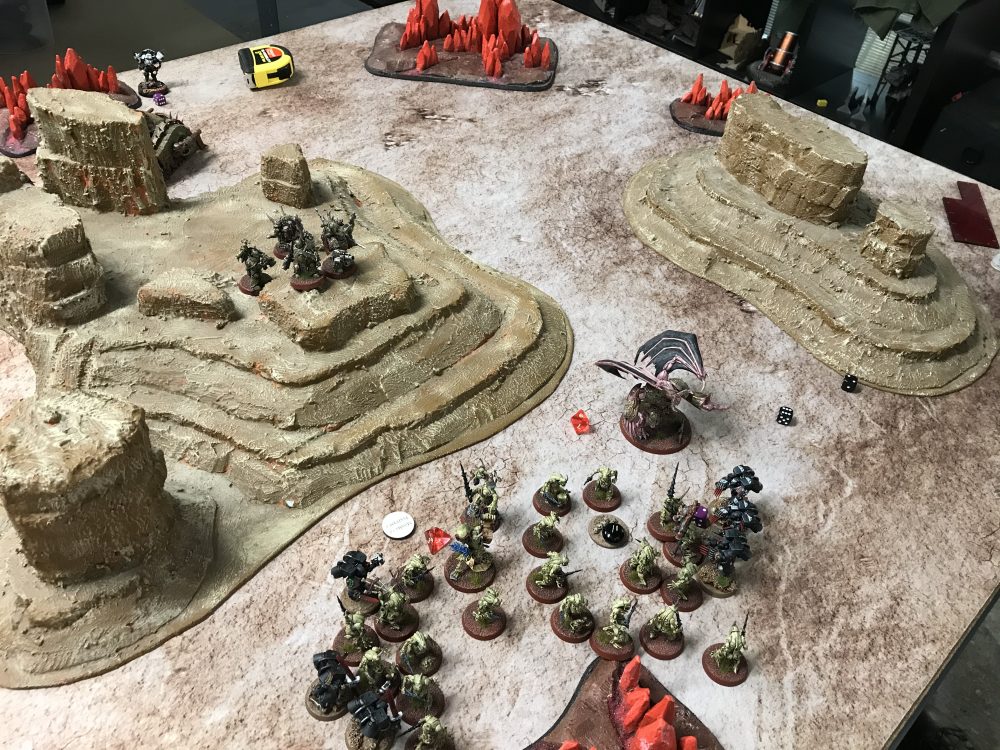 I forgot my golden rule about the Death Guard when making this list.

And I took very few. Only the Tank Commander packed any real punch. It did kill a Plagueburst Crawler in turn 3 though.

So in hindsight, it was no surprise that this game went the way that it did.

The Command Melta Squad came in and killed a Contemptor Dreadnought in one volley which was nice. 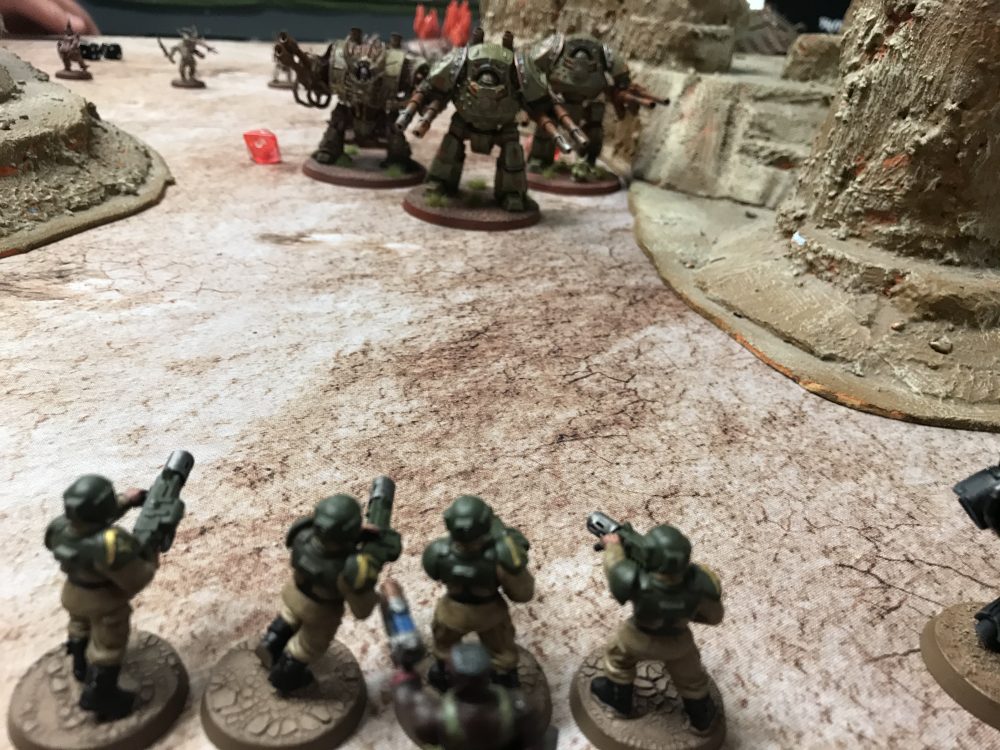 You can see Mark’s Death Guard list and write up on his blog. And my Catachan and Raven Guard list was covered in a previous post. 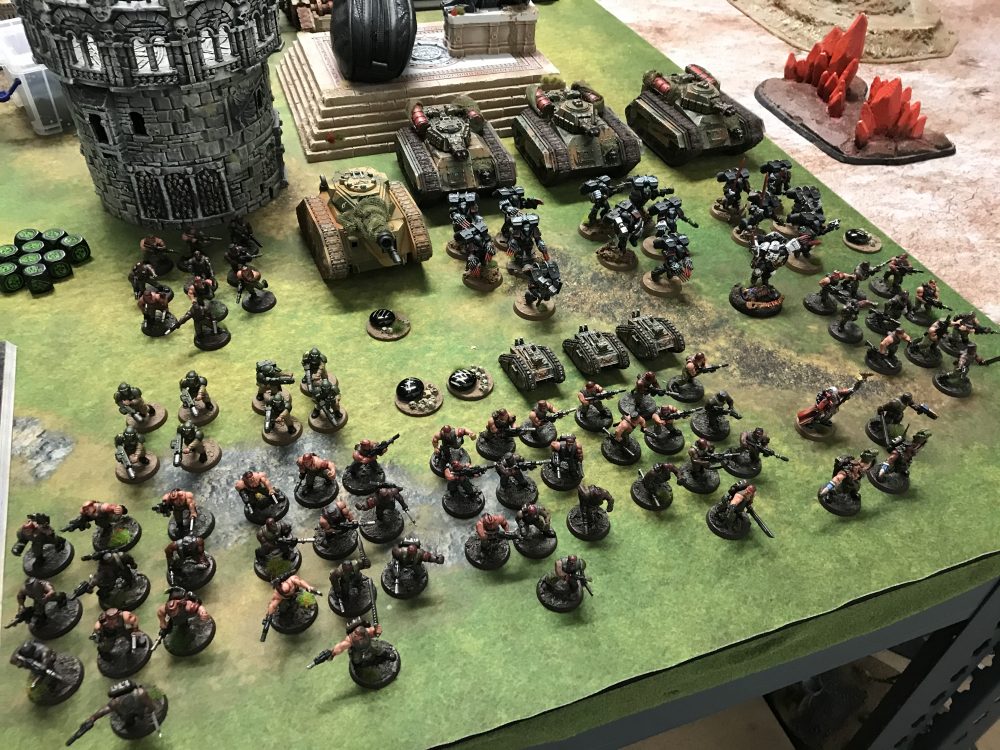 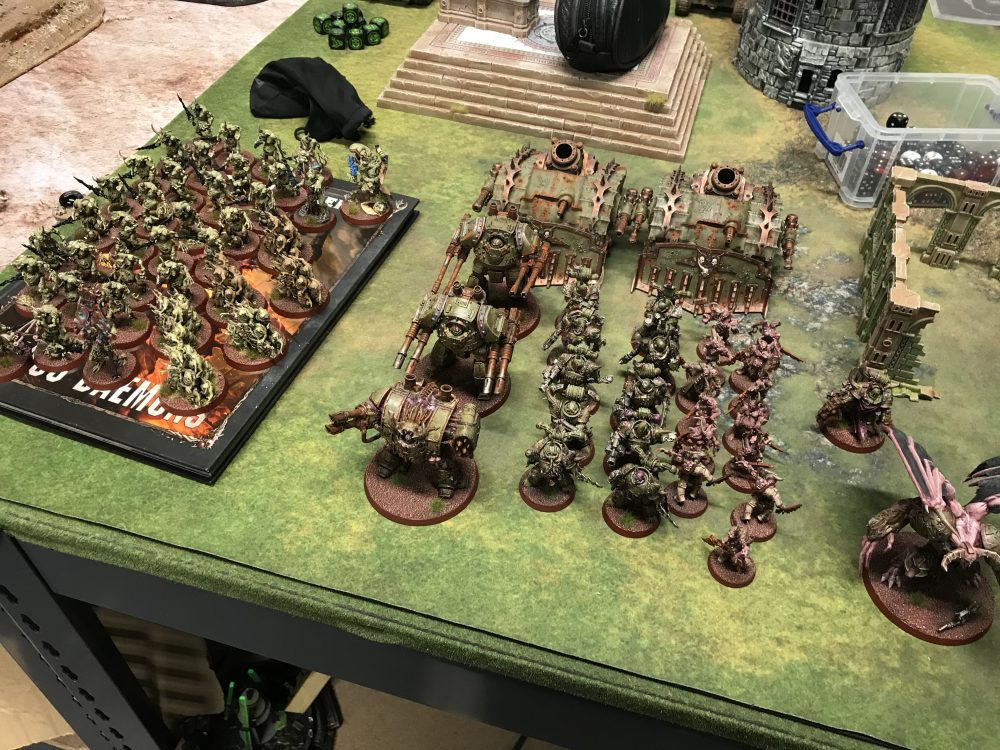