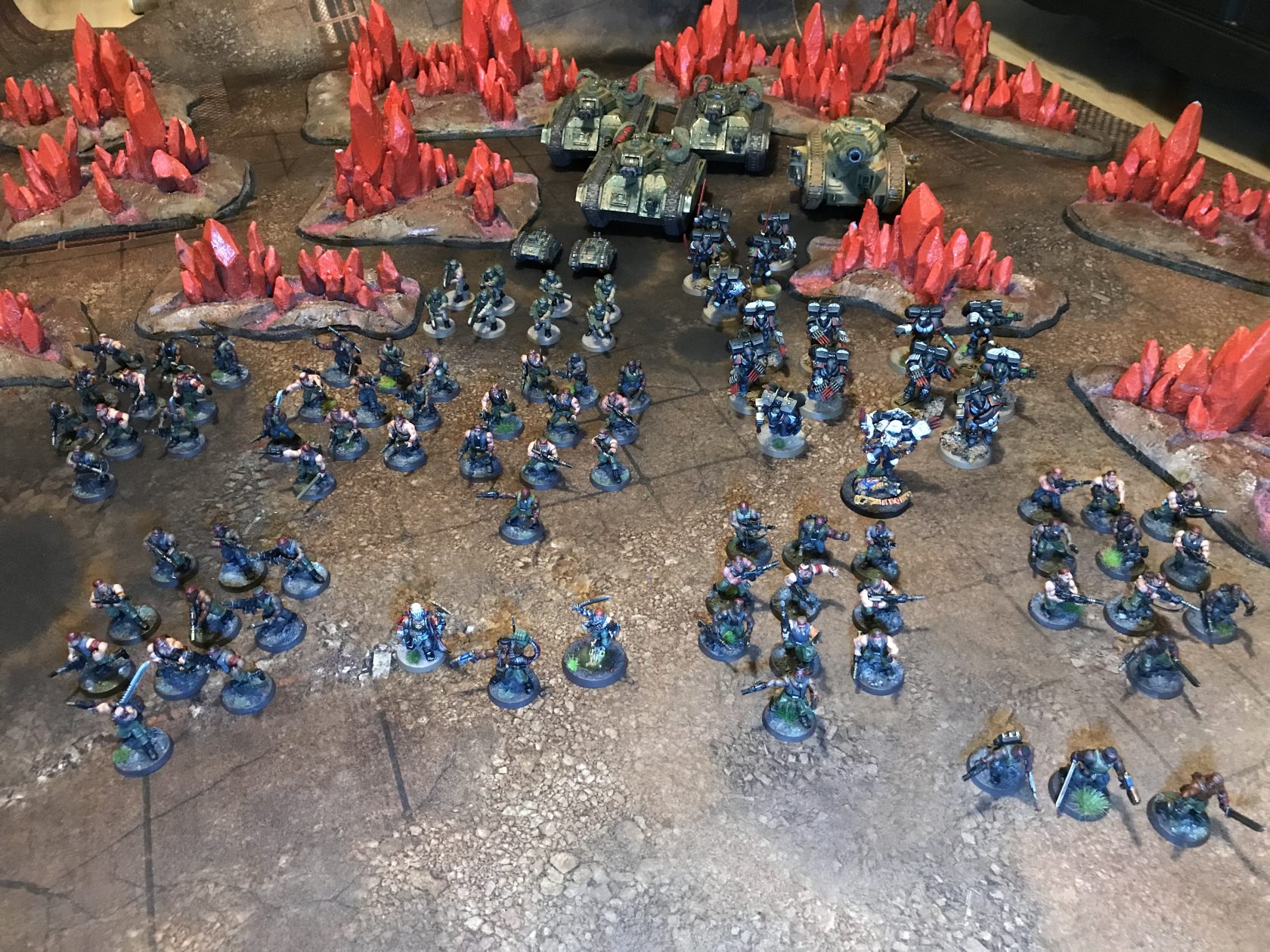 I wanted to run Raven Guard with their new supplement, this is what I came up with...

I started writing this article and Astra Militarum & Raven Guard list in mid-October before I even have a game in the calendar to use this list. So whatever game I play next, it’ll be with this list, which I’ve named The Hammer and Scalpel. So I recently picked up a copy of the Raven Guard supplement and this got my stealthy juices flowing. This will be a complete change from my last matchup against the Death Guard – where I took 7 Leman Russ.

The terrain in this little pre-game photoshoot is from Go To Gound Wargaming.

There seemed to be a few abilities and rules that enabled the targeting of characters. Also, the ability to come in via Deep Strike with my Vanguard Veterans is a form of assassination too. If done correctly.

Each unit of Vanguard Veterans has a single Storm Shield and Thunder Hammer model. I then have a mix of;

I’ve also used Favour of the Ravenspire twice, 2CP in total – before the game starts. Each usage allows a Sergeant in a squad to take one of a few pieces of special issue war gear.

The first is the Silentus Pistol which replaces a Bolt Pistol. This weapon has a range of 12″ and is S5, AP2 and 2 Damage – it’s 2 shots too. It can also target characters and has +1 to hit. On a Sergeant and near Shrike that’s 2+ to hit re-rolling fails. The Strength 5 shot is particularly nice against Death Guard I think.

Then I’ll take a Master Crafted melee weapon on another Sergeant. This grants +1 Damage. I figured that going for volume here is the best bet so Master Crafted Lighting Claws it is. With Angels of Death and the +1 Attack for double Lightning Claws, I’ll have 5 Attacks from the Sergeant with WS3 re-rolling fails thanks to Shrike and re-rolling Wounds. With 2 Damage only a few need to go through to really threaten an enemy character. 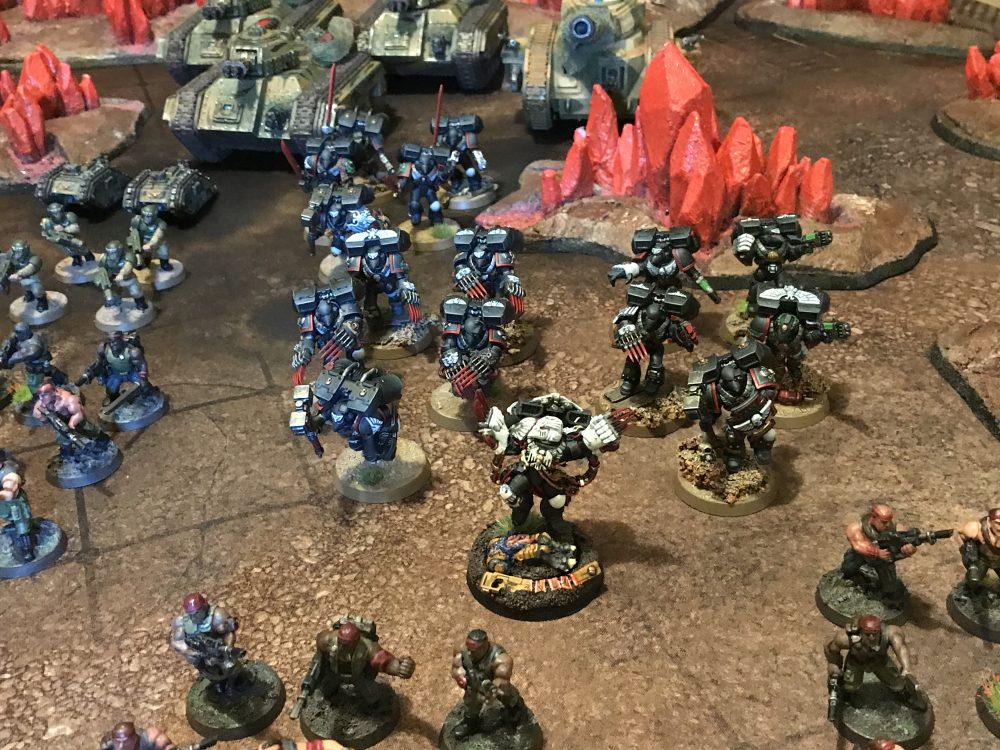 I’ve had to note down all the relevant Strategems because there are a few.

I just remember to use Stranglehold before the game begins. This forces the enemy to use an extra CP on the roll of a 5+. It will only work a third of the time but it could really hinder the enemy and remove a few CP. This could be particularly valuable towards the end of the game if the enemy has run out of CP earlier than expected.

Lay Low The Tyrants plays particularly well into the Assassination theme. Especially with the Master Crafted Lightning Claws. It gives +1 to Wound against non-Vehicles that have four Wounds or more.

Force Their Hand is an especially delicious Stratagem. It requires the Raven Guard to be on an objective in the enemy Deployment Zone – but it essentially allows you you to force the enemy to discard a Tactical Objective and draw another. This could be really powerful for denying the enemy an easy VP or D3 VP. A possible Game Changer.

The Raven’s Blade Stratagem will be useful for a unit of Vanguard Veterans that get separated from Shrike. It allows a unit to re-roll their Charge. This will be handy to use with Deadly Prize or Force Their Hand – both of which require a Raven Guard unit to be on an Objective. The main force can drop to be aggressive and another group could drop onto an enemy Objective.

Strike from the Skies is interesting. A Jump Pack unit can Advance and Charge and gets +1 to Charge. It can be used when they drop in, they didn’t Advance so that boon is lost, but +1 to Charge is nice. Especially on Shrike who I want to get in to remove the Overwatch of the enemy. But this would be a bad idea if he succeeds then his abilities would be lost on the other Vanguard Veterans – who would too far away once his charge is successful.

So its best used on Veteran Vanguard unit before Shrike leaves them. The re-roll to Charge with a +1 gives them a 65.9% chance of success. I came to that conclusion after writing some code to simulate this action 10 million times. This is a lot better than the normal chance without re-rolls and without a +1 which is 27.7% chance.

Being able to Fall Back, Shoot and Charge might be a game-changer, which is what False Flight gives you. Coupled with Strike from the Skies it gives you a great deal of movement. Enough to move between units with a 12″ move, then an Advance and then a Charge with a +1

The last two are from the regular Space Marine Codex. Death to the Traitors gives an extra attack on each hit roll of a 6 against Heretic Astartes. With Lightning Claws that have the most attacks, this could be really devastating against hordes of Cultists.

Finally, we have Hammer of Wrath which just makes me think of 7th. When a Jump Pack model ends its Charge within 1″ of an enemy model that enemy unit suffers a Mortal Wound on a roll of a 5+.

I did have 17 Ratlings instead of those two Command Squads, but after running some MathHammer on the Ratlings they just were not performing. Disgustingly Resilient just removes too much damage, even on the Mortal Wounds. The Ratlings were 153 points so a chunk of points would’ve been put into something that wouldn’t have performed.

I also had a Tech-Priest in the list. I figured that the Tech-Priest wouldn’t keep up with the Hellhounds and the Leman Russ May just get focused down and killed in a single turn. Making the Tech-Priest useless.

And that is it for this Astra Militarum & Raven Guard list.

This gallery of images is slightly off, as it contains Straken which was an earlier version of my list and only two Cyclops, otherwise, it is mostly correct. 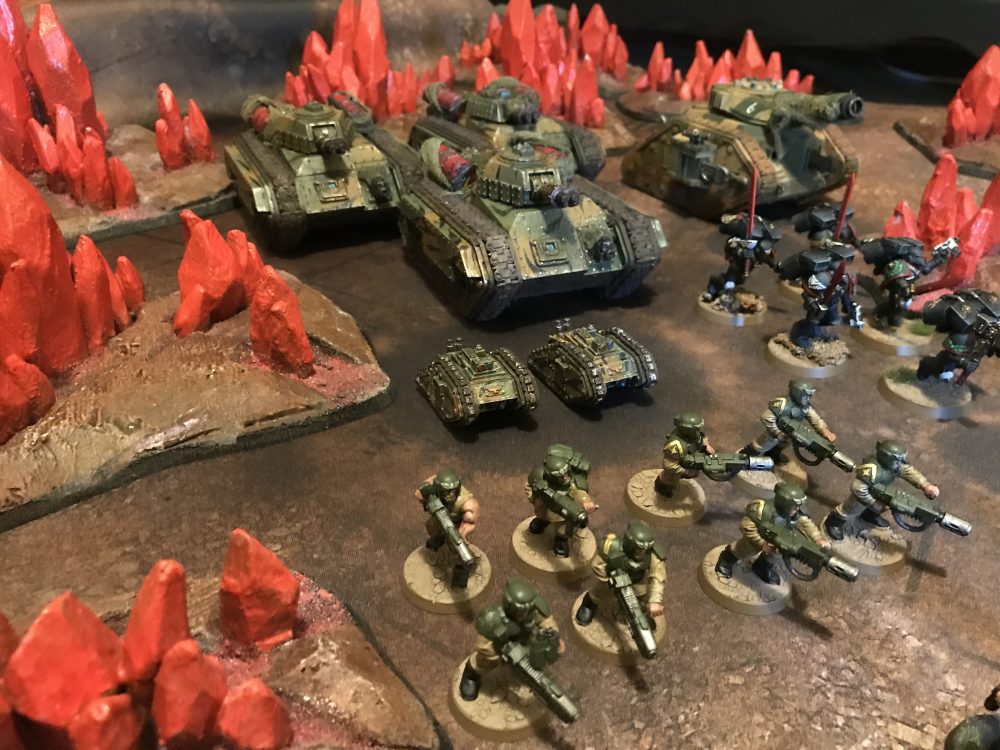 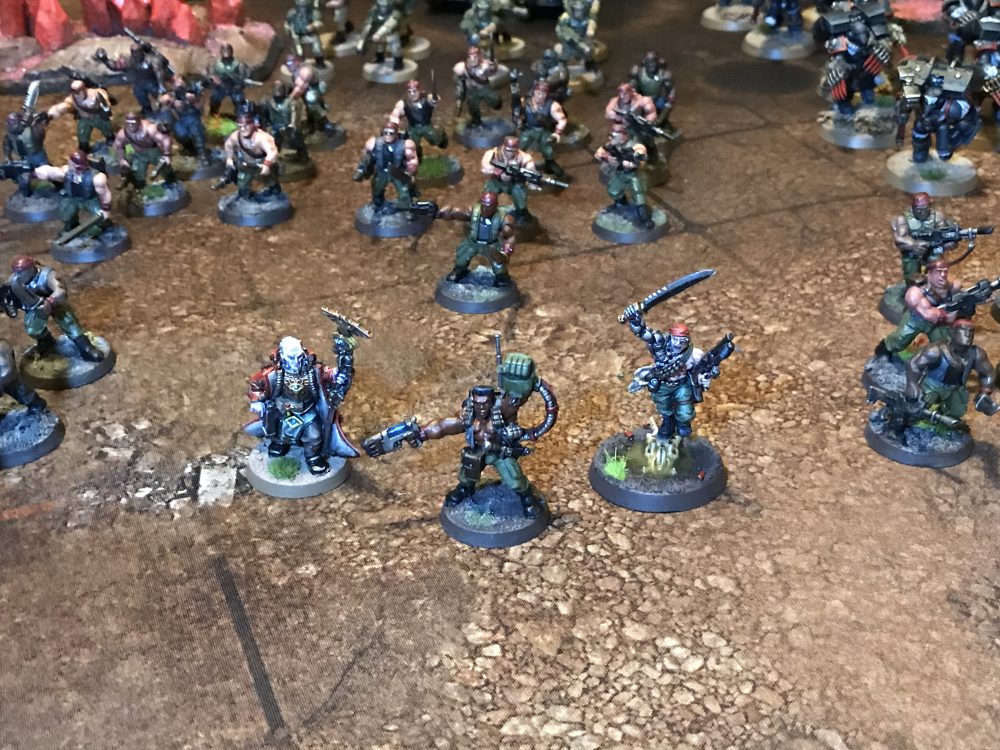 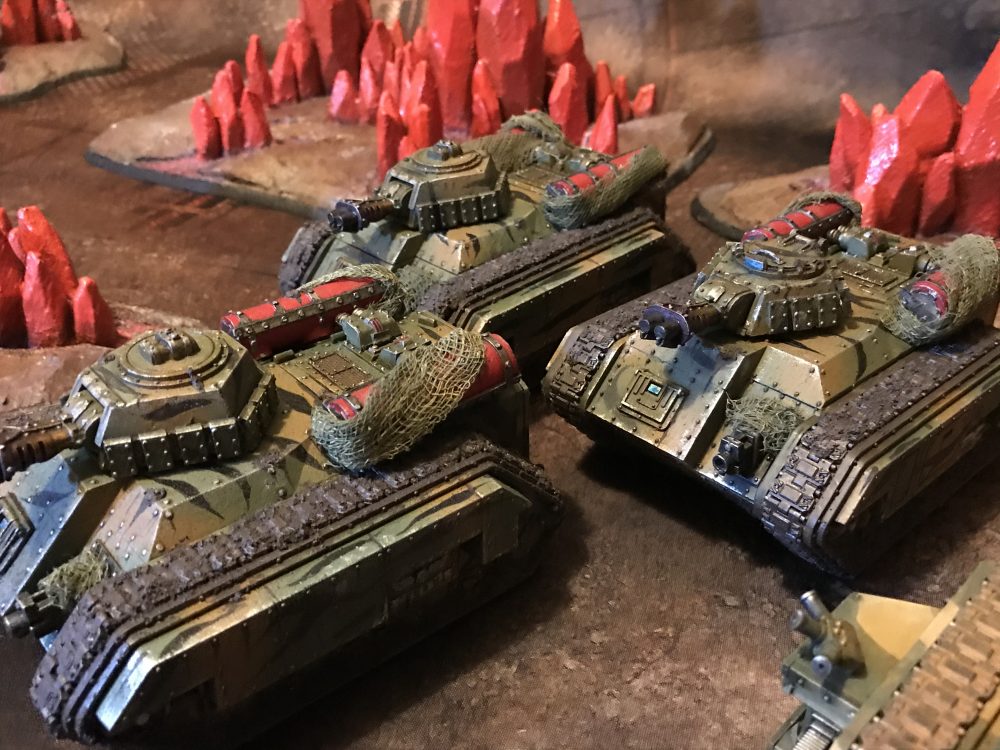 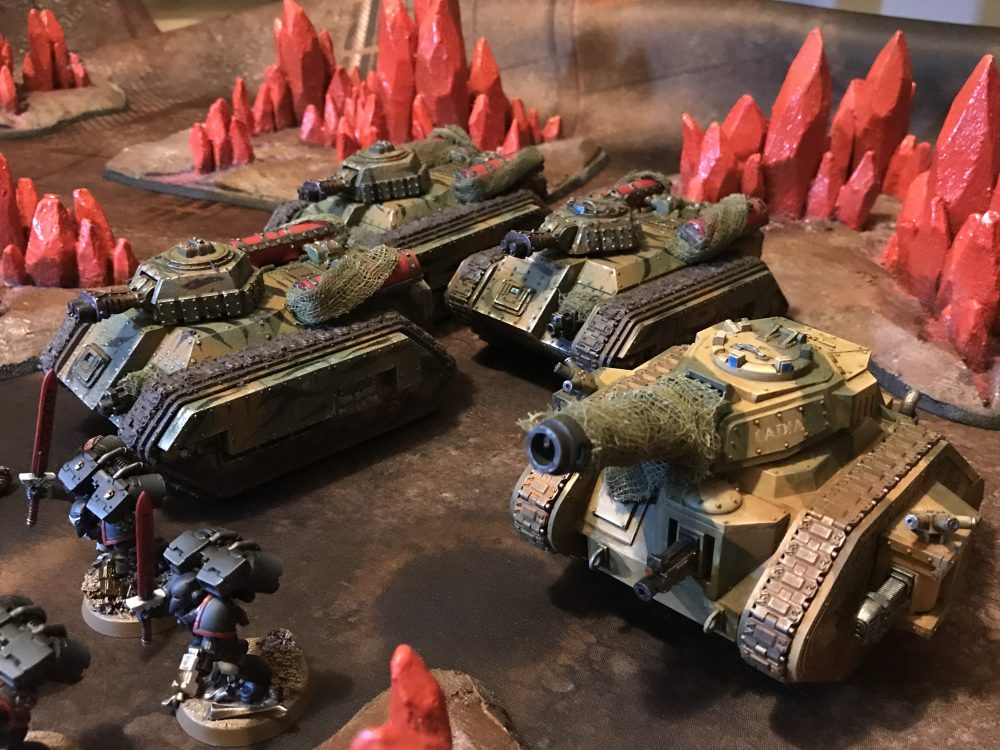 A Catachan Russ, it looks very much like a Cadian Russ – but the netting makes it Catachan. Fact. 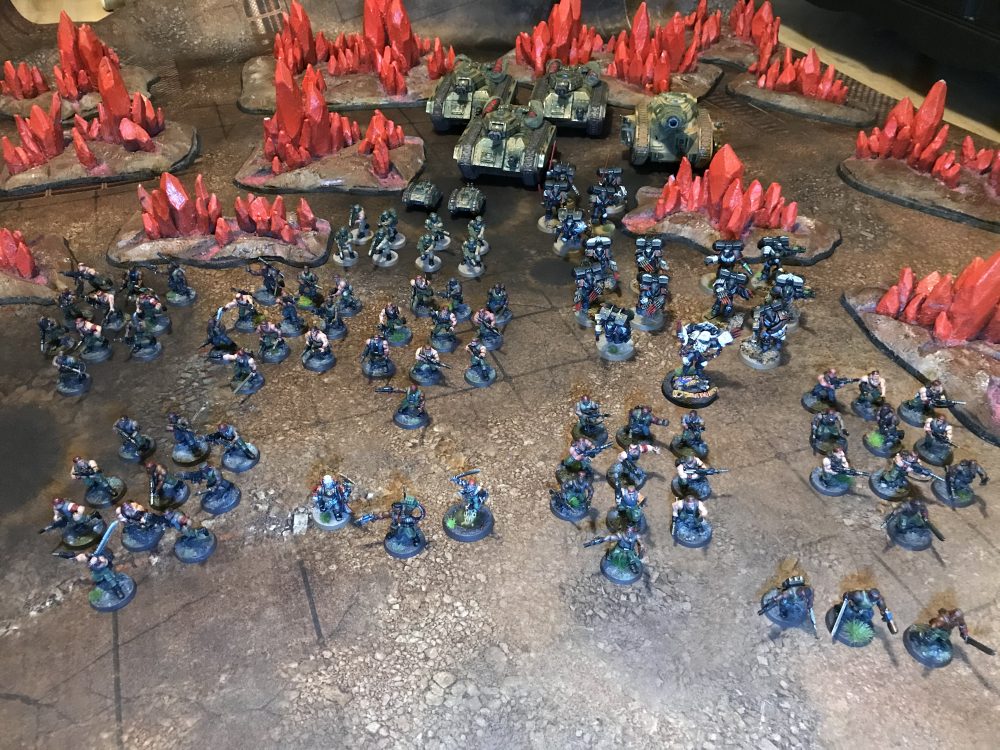 I am unsure how this will play out on the battlefield as there are some gaps in the force. Mainly high Strength multiple Damage weapons which the Leman Russ provided in the last game. Those points have been spent on the Raven Guard.

Dropping all those Russ has meant I can take a Brigade of Catachan which gives a nice pool of CP and many more bodies on the battlefield than my last game. Board control should be a little easier than last time – but keeping them alive will be hard as always. Bolters just wreck Guardsmen.

A weak point will be the Hellhounds. Their weaponry is not suited to taking on the Death Guard – as it is only 1 Damage. If there are Pox Walkers or Cultists present then I may fair better with the Hellhounds.

The Tank Commander was originally a Leman Russ with a Heavy Bolter and Plasma Cannons. But I went for Tank Commander in the end with a Lascannon and Battle Cannon. The range of the Battle Cannon is really nice and can target the whole board. The Lascannon at 48″ is not as good but much better than the Plasma Cannons and Heavy Bolter at 36″. It can sit back, order itself to re-roll ones and deal long-range damage.

My main issue might be these two Contemptor Dreadnoughts! I do not have anything dedicated to deal with those – if they arrive. The Raven Guard might be able to bog them down and the Catachan can also try and do the same. But I think they will be deployed well back and screened too.

When it comes to CP I start with…

Then I need to remove 2CP for Favour of the Ravenspire, as I will use it twice.

A further CP is lost from taking the Warlord Trait on Shrike, even though he is not my Warlord.

Then another CP is used because I have two Astra Militarum Heirlooms of Conquest.

Once the game starts I will lose another 2CP for Stranglehold – leaving with 10CP once the game begins.