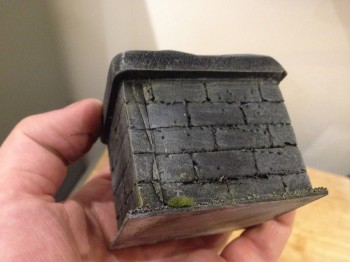 Tomb to hold The Grimoire of True Names

This is the start of what will be a short campaign. I wanted to add some back story and make the battles feel like they were linked in some way. For those that don’t know the “The Grimoire of True Names” is a Relic from the Inquisition codex, it contains the “True Names” of Daemons.

This is my first attempt at writing anything like this, ever! Read on, enjoy, comment, be kind.

Kysan lay on his back staring at the pure white sky of his home planet Exic. He chased the “floaters” in his eyes, trying to catch them as they forever hovered just out of reach. His elder brother joked with him that they were the Daemons of the Warp trying to escape his vision and enter his soul. Kysan knew this to be nonsense, if a Daemon was coming for his soul he’d not know until it was too late and his mind was filled with the hate and fury of a thousand heretics.

In a few months he’d be called up to fulfil his planet’s tithe. Like many of his planetary brothers and sisters he was excited about the prospect of being conscripted into the armies of Man. Life on Exic was dull, a barren rock on the edge of known space, it had seen little action for centuries. No wars, no uprising, no heretics, no technological advancement and no notable discoveries. It’s one use was it’s population, Exic’s tithe rate and birth rate were perfectly correlated. Before Kysan walked or talked he was destined to die in a place far from the rock he would eventually know as home. His Mother would tell him tales of how Exic was once one of those planets that young men and women were sent to fight and die on, to keep what rightfully belonged to the Emperor from the clutches of evil. Exic’s own enemy had been suppressed long ago.

The Tau had been defeated in the Ferigon system with a great loss of life to both sides. Kysan’s ancestors had fought a long and bloody war against the Tau a millennium ago. Realising these great losses were weakening both army’s ability to fight and hold ground elsewhere a ceasefire was agreed. For the system of Ferigon had a much more sinister, all consuming foe. The ceasefire allowed the Chaos horde to be defeated and pushed back into Warpspace, as the chaotic tide struggled to fight against two strong and determined opponents.

As the ceasefire continued for centuries it became a peace treaty of sorts. A peace that had made it’s own rules over the years without it ever being formalised. The Tau and Imperium had the security they desired and were able to coexist within Ferigon. The odd skirmish would break out but it would quickly dissolve into taunting as each warring side realised there was little to gain other than lifeless, grey and brown barren rocks. Plus the reach of the Astronomican was weak in Ferigon, especially towards it’s eastern edge where Exic is located. Further expansion into the Tau Empire was impossible, any Navigator attempting to enter such a realm would find their worst nightmares projected directly into their minds. They would be lost forever along with their crew. The crew would be reanimated as mutated, hate filled, chaotic enemies of the Imperium at some point in time. The Tau of course are unaware of the lack of Astronomican and the Daemons that await us all in the Warp. Their psychic abilities mirror that of an Exic rock, nil.

As Kysan stared into the sky, his mind wondered and dreamt of the heroic actions he was sure to perform for the Imperium. The Ork blood sprayed over him like summer rain, he revelled in the green mist along with all the glory that came with it. Kysan didn’t notice the darkness growing above him, he was overtaken by that green Ork mist. The darkness grew over his body, like a physical manifestation of a large debt, an ominous black cloud. As it grow it rose higher into the sky where Kysan did notice it. It was a foreign thing for him to see, similar to the polluted rain clouds that are common on Exic. But it was different; perfectly matte, no texture, deep and dark – a Warp Rift. Then came the lightening and along with it a crack of thunder like the fabric of space had been whipped into screaming agony. Kysan’s eyes the filled with blood, he was screaming along with a million other souls on Exic. His flesh and bone remained standing, but it answered to a new master now. Kysan’s had gone, but his name would live on forever in The Grimoire of True Names.