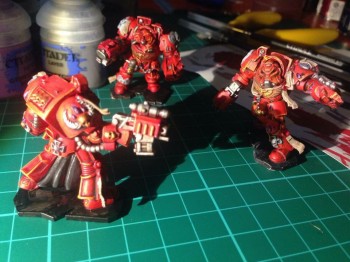 My Opponent’s Blood Angels – Thanks Paul for this photo!

On to Part Two of this short disastrous tale. The first part drew heavily on the start of Fifteen Hours, but it leads into this next part well, plus I think these types of mistakes inside the Imperium must happen millions of times a year without anyone ever really noticing.If you have any comments please do chip in! You can, and should, read Part 1 first. Now, onwards into this 40K story!

Captain K.H Jayy’s head felt dulled and shameful as he entered the small but perfectly constructed command tent in the ruined city of Piphos. This magnificent city was once the capital city of the planet Phos, but the Chaos tide had undone its splendour and turned it to a wasteland of ash and dust. The rest of the Espandor system near the Eastern Fringe hadn’t faired much better.

Jayy’s many years of service as a Blood Angel Terminator could not prepare him for this next task, it was wrong and against the true will of The Emperor – this he was sure of. But with the Chaos influence growing in the Espandor system something had to be done. The homeworld of the Ultramarines was in dire need of assistance and the Blood Angels had been called upon to aid their brothers in arms. The Ultramarines had been penned in now on their Eastern homeworld of Macragge now for a year or more – encircled by an ever stronger enemy.

The Deamon Prince, known as Shaaki, had commanded his waves of filth against countless Imperium forces and each time he rose victorious and stronger . This onslaught against Mankind had gone unchecked for too long and too many Planetary Governors had fallen to Shaaki’s twisted ideals. Only the strength and will of the Ultramarines had held fast against Shaaki. The advance must stop before it reached Macragge.

The meeting in the command tent had gone on for 23 hours, the translation software was buggy, there were several long breaks as the Tau’s xeno tongues became a hiss of sound and noise rather than taking on the Emperor’s pure and rhythmic language. Despite these set backs the ground rules had been set for the Tau’s ‘Abyss Cadre’ to ally with Jayy’s company of Blood Angels. He didn’t like it, at all. Dante and Marneus Calgar had both agreed upon the strategy and who was Jayy to argue with two Chaptermasters, let alone one. These desperate ally’s had now been sworn together for a far greater good, the ‘Abyss of Blood’ had been born.

With Macragge close to falling and the Governors of neighbouring system’s in turmoil, the Chaptermasters had needed to turn elsewhere for assistance in abetting the Chaos charge. No human without genetic modifications was able to hold off the psychic oppression of Shaaki. So a wary hand of hope was sent out to the Tau Empire, to gain their help against Shaaki. The Tau had also suffered terrible loses due to the Chaos hordes attacking and sacking several Tau worlds also in the Eastern Fringe. The High Ethereals had agreed to meet and so here Captain Jayy found himself, swearing an alliance with an alien race to save Macragge.

The Tau’s insensitivity to the pressures of the warp and other psykers would also prove beneficial on a battlefield against Shaaki. A minor advantage Jayy thought as he poured over in his mind the countless comrades he had lost to the blades of the Kroot seven decades ago. Kroot, while not Tau, are as bad as their bald headed, blue skinned cousins. Their false ‘God’ that they call the Greater Good makes Jayy sick and frenzied. The Emperor is the only good in this world. Jayy swore all those years ago to separate all Tau from their heads, today changed nothing.

The main Chaos force was close to turning Mankind toward a path of pure destruction. A desperate and last ditch plan was needed, so Chaptermasters had put into practice this unusual arrangement to slow the Chaos advance and save many human lives and worlds. If the allegiance to the Tau left Jayy with a sour taste in his month then the next phase of the grand plan would make his blood boil beyond that of any Black Rage. An Imperial Navy troop transport had unexpectedly dropped out of warp near to their current location. An error somewhere down the command chain meant its Navigator had become disorientated and was unable to complete its journey in one smooth motion through the warp. A live fire exercise had presented itself for the newly formed alliance.

The scouting party left the Lander and spread out into a ruined city that only smelt of ash, it left one with a dry throat after a few short breathes. A base of operations was set up and a vox-field-link established with the Vengeful Remedy. The standard operation procedures were put into place for a hostile planetary landing;

Everything was complete, aside from the last item. There was nothing to log. Just a lost city of fire and ash, no life.

All heads hit the floor as the sky erupted into a cacophony of explosions and scouring missile streaks. The endless drills onboard the Vengeful Remedy kicked in – heads down, eyes up, identify the enemy, move to cover and return fire.

Faces buried themselves into the ash, braced for the inevitable bombardment of ‘something’. Yet it didn’t arrive. Instead hundreds of other Landers started to touch down within the vicinity of Lander #15. The sky of this foreign land was filled with the cracks and thumps of ships entering the planet’s atmosphere, followed by the whining of engines coming into land. Soon the barren landscape was blanketed in Navy transports, then shortly after that hundreds of thousands of Guardsmen.

Soon after Lander #15 had left another command blinked onto the bridge’s main console from HQ. “Emperor Save Me” thought Major J.G Hay, another damn mistake from command, another mess to clear up, lost men, lost resources and lost time. Hay sighed and flicked he command onto the primary display in the bridge to read more easily.

The panic of the astroid field returned, sirens sounded, the ship’s automated evacuation system kicked in.

ALL TROOPS TO YOUR LANDERS

ALL TROOPS TO YOUR LANDERS

Within minutes Landers were leaving the Vengeful Remedy. Hay screamed at his staff to stop this madness. He had not ordered this and it was a mistake from HQ. His senses were awash with rage, no mount of shaking his subordinates or yelling helped. The evacuation proceeded without any of Hay’s input or say so. He slumped and sighed.

An hour or so passed, a Servitor entered, “Evacuation completed, Major”. The Servitor left.

A few minutes passed, Hay stood and surveyed the planet below using the Remedy’s external maintenance Servitors. A sea of landers descended towards planet HGY-45-1, otherwise known as Phos, for absolutely no conceivable reason.

Hay saw that it started on the port side of his ship, a massive explosion ripping apart everything. An internal explosion, nothing from the outside would cause such devastation. Plus the ship’s shields hadn’t flickered as a foreign object entered. Sabotage, subterfuge or something much darker, Hay didn’t know. Hay would never know.

THIS IS FOR THE EMPEROR!

THIS IS FOR OUR BROTHERS IN BLUE!

THIS IS FOR OUR GREATER GOOD!

THIS IS FOR THOSE FALLEN BY SHAAKI!

AND FOR THOSE SHAAKI WILL FELL!