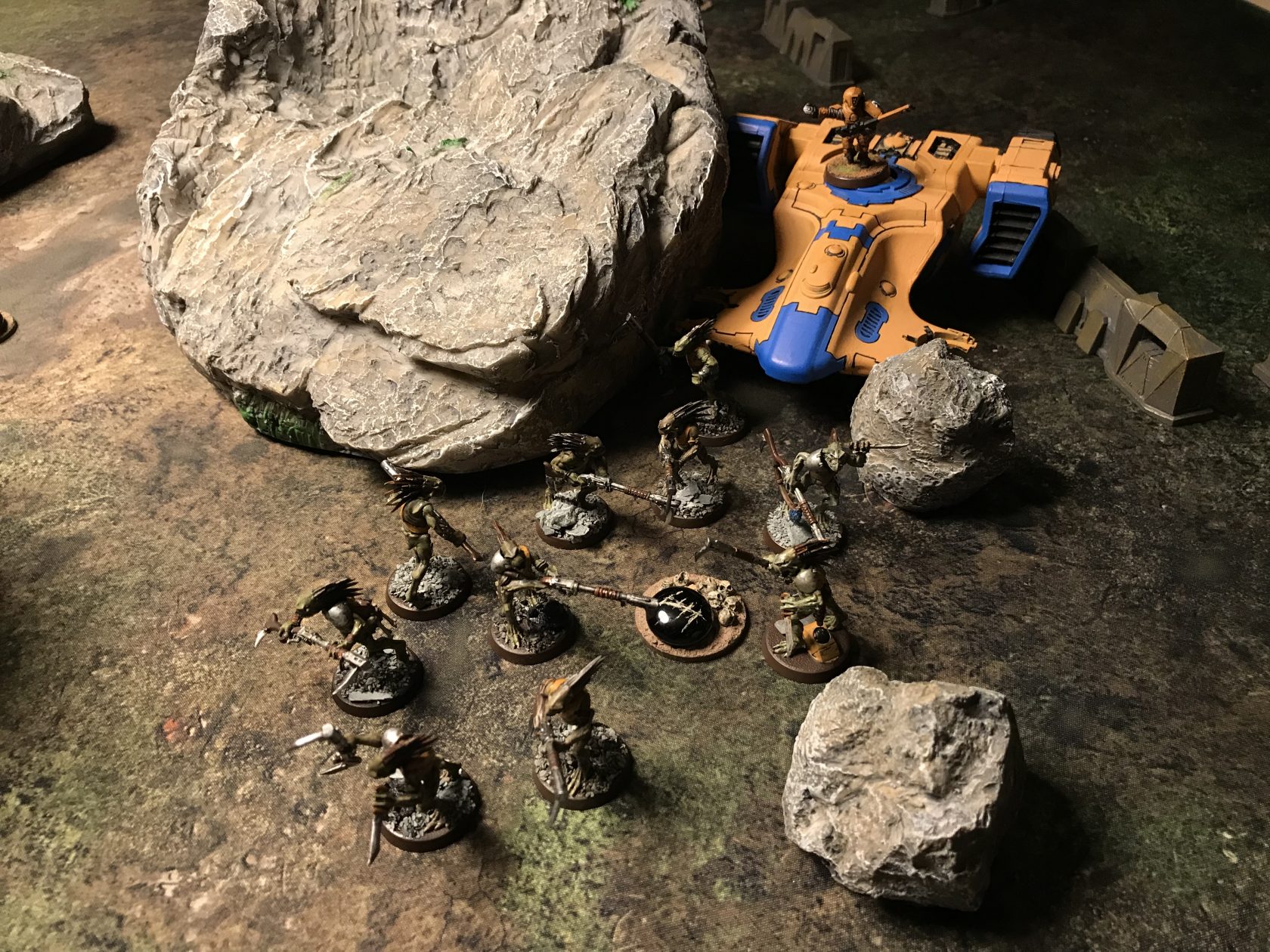 A very short bat rep today for the Tau vs Astra Militarum...

A bit of a smaller game today. 1,000 points the Tau vs Astra Militarum. Dave, my Tau wielding friend, hasn’t played 8th much and hasn’t got the Tau Codex. So I’m slowly reintroducing him and his blue fishy friends back into the game.

Firstly I’ll say this isn’t a full game. We only managed two turns, so if you want a full report and a full outcome this isn’t the battle report you want.

I’ve had another friend in attendance for this game, Pete, who is semi-interested in 40K and wanted to see a game. And this game versus the Tau seemed like a perfect introduction.

I opted for a Battalion Detachment for 5 + 3 CP. I’ve also opted to use the new FAQ Beta Rules. Which means I can’t regenerate more than 1CP per turn, no Reserves in turn 1 and we can use the Prepared Positions Stratagem.

Old Grudges should be fun. I’ve not used it before. It allows me to nominate one enemy unit before the game begins and then any units within 6″ of my Warlord can re-roll failed Wounds against the target.

This could be handy coupled with my Missile Launchers against a Riptide? 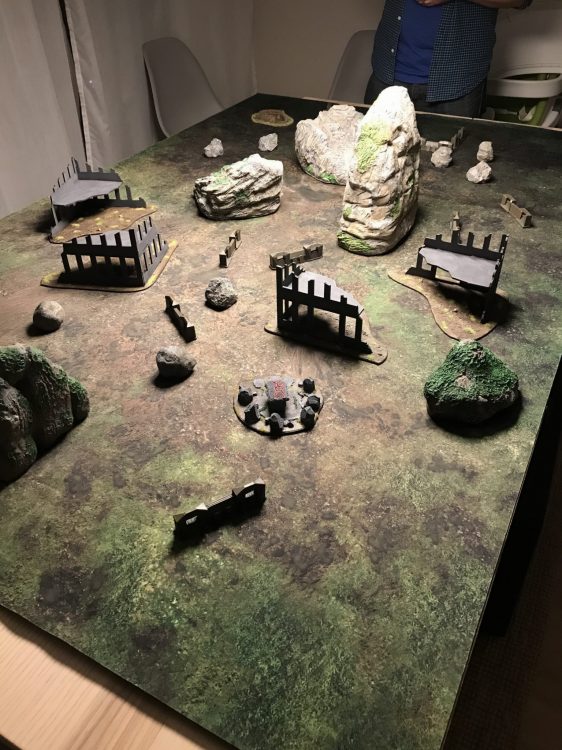 The Battlefield – Tau vs Astra Militarum

The Tau spread out along their deployment zone and finished deploying first and took first turn. But the Stealth Suits and Shadowsun popped up right in front of my lines.

I deployed my Warlord so he was close by to two squads and my Missile Launchers. I’ve not used Old Grudges 8th Edition and with the recent FAQ, I moved away from Grand Strategist. Old Grudges would allow my units within 6″ to re-roll Wound rolls against a specific target. I nominated the Riptide.

A placed a Wyvern either side of my deployment zone so give good coverage. The Chimera with the Command Squads inside deployed as far forward as they could.

The battle was set. 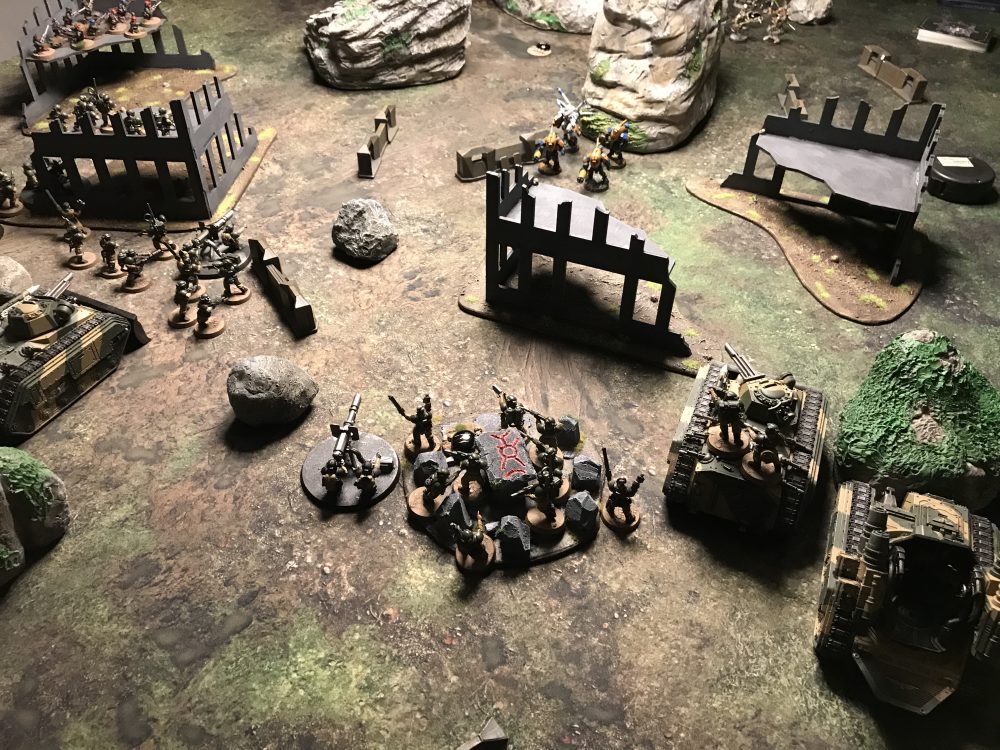 The Tau movement was minimal but they needed to get all units out of their deployment zone to achieve a card – which they did. By shimmying forward slightly.

Shadowsun and the Fusion Blaster Stealth Suit destroyed a Chimera in one swoop. First Blood to the Tau!

Everything else opened up against the Ratlings and five perished. 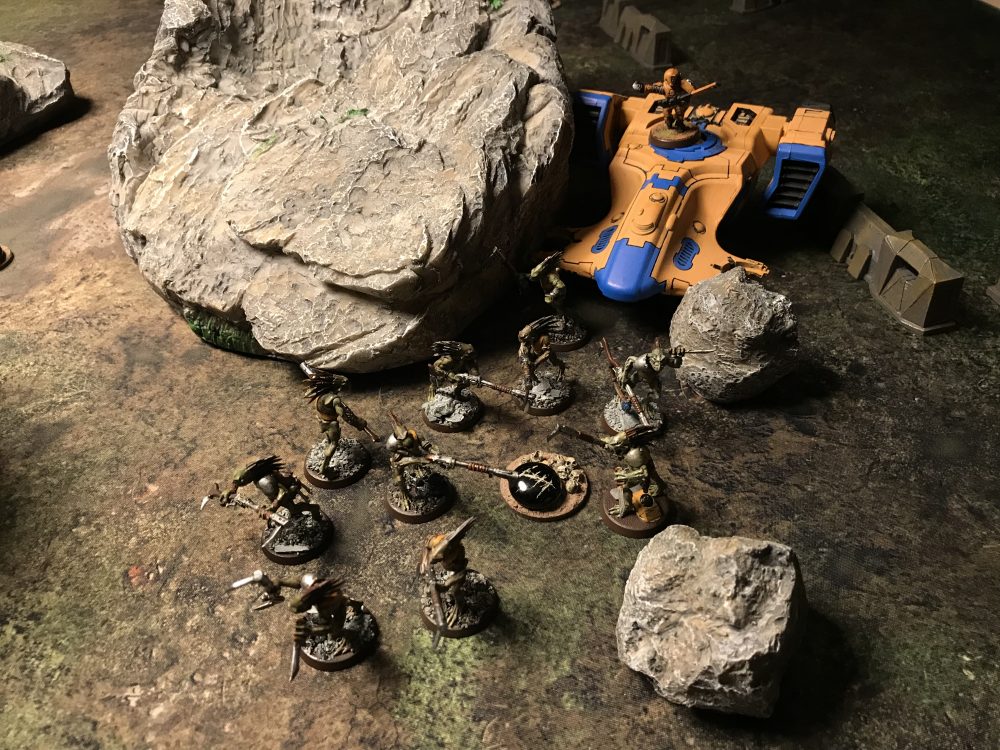 With Old Grudges set up against the Riptide, it was time to take it down. But I didn’t. The Riptide was reduced to four wounds (from 14) which I think was a good start – at least. A Devilfish was also reduced to 8 wounds from 13.

I focused on the Stealth Suits but didn’t manage to kill them all. I killed one. They are a lot tougher than you think especially with that -1 to hit.

At this point, we were even on VPs at three each. 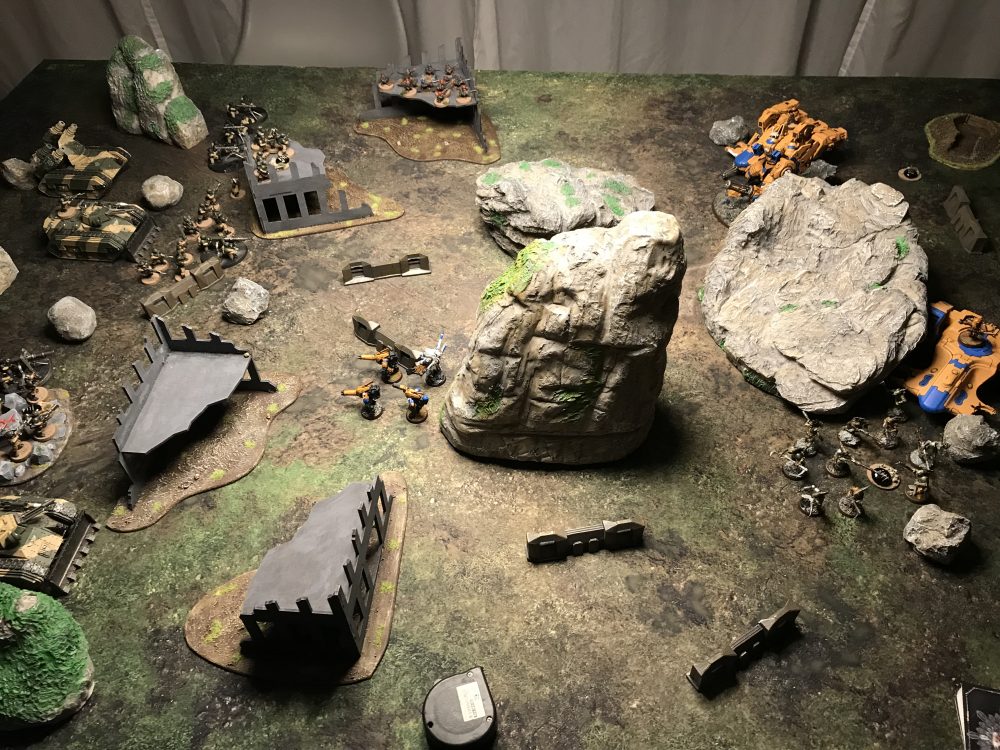 The Tau finished off my Ratlings with ease and then opened up against an Infantry Squad – who also perished. This gave them a VP from the Blood and Gut card – I think. 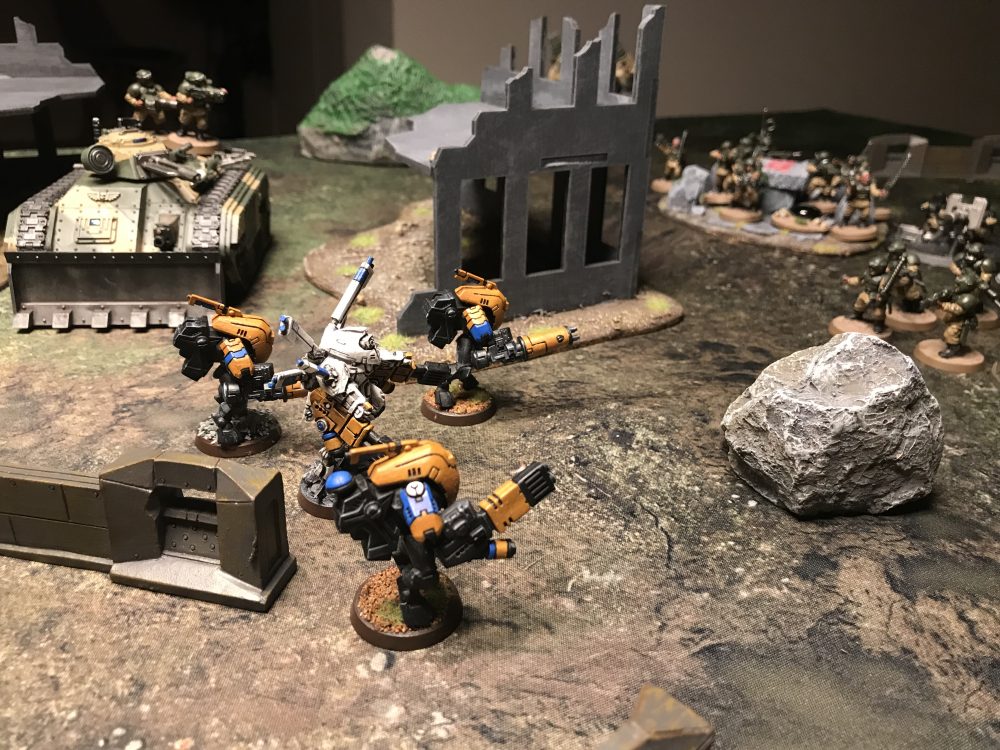 I went after the Riptide again but failed to get those last four wounds off! How infuriating!

The Wounded Devilfish also survived but was down to four wounds.

It really is nice having all these Lascannons and Missile Launchers!

The two Command Squads jumped from their Chimera and wasted the two remaining Stealth Suits. Yay! 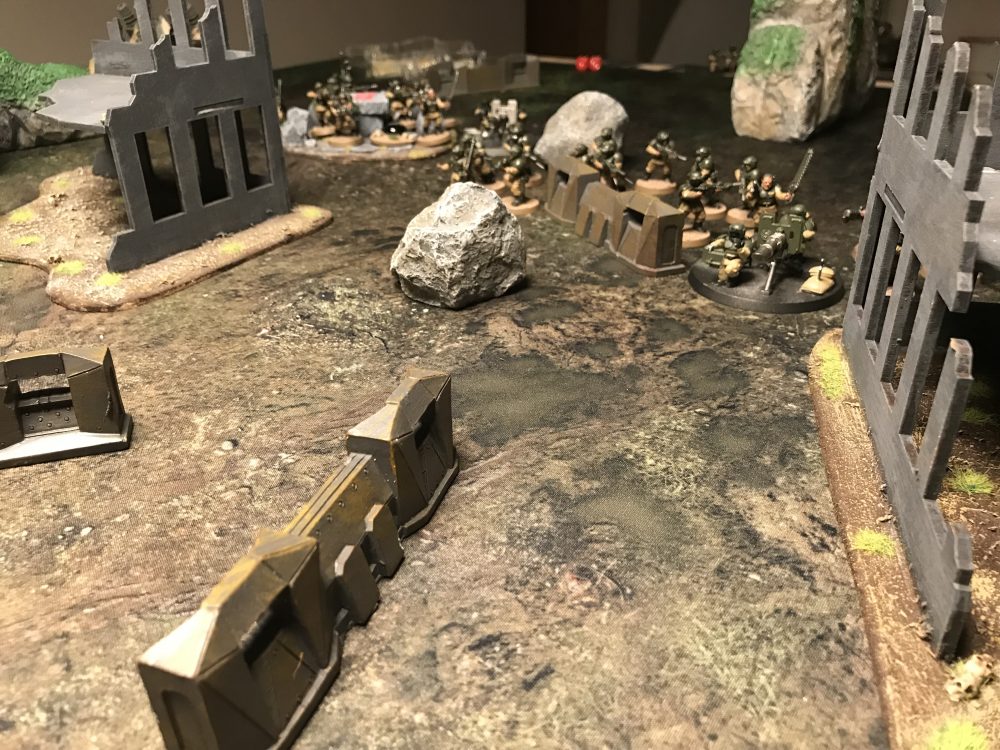 We ran out of time – it was late. This was mainly due to chat and a longer time limit! A plus side to playing at BASH rather than at home!

Despite only playing two turns and not killing the Riptide I really liked Old Grudges and I can see it being very useful against elite armies which rely on a few single powerful units.

With Orders and Old Grudges you can be re-rolling hits and wounds against an enemy easily and be putting a lot of hurt on to it. I’m excited to use it again!

It seems the purpose of the FAQ worked!

The game “finished” 4 – 5 to the Tau. But I feel this “victory” would not have lasted. The Riptide was on 1 or 2 wounds, a Devilfish was about to go down and the Stealth Suits were all gone. I had only lost my Ratlings, a Chimera and a single Squad. My Warlord, 3 Missile Launchers, 2 Lascannons, Command Squads, a Chimera and 2 Wyverns remained untouched…