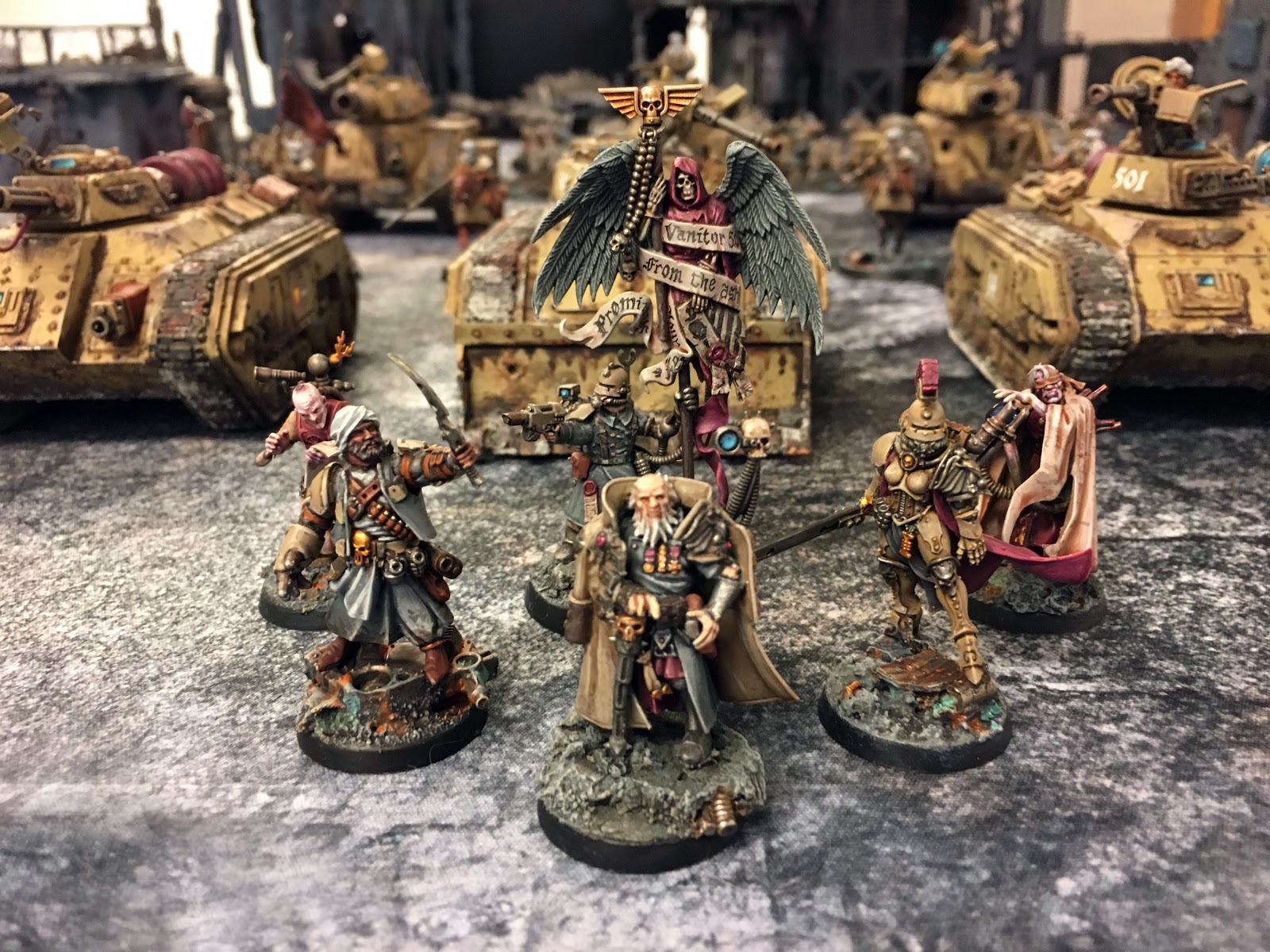 A showcase of the amazing The Vanitor 501st Astra Militarum force...

I have an army to show you today! This is Prominusiv’s force. I found his army on Instagram and he featured in my Inspiring Instagram article. and he has very kindly offered this break down of his amazing looking force!

Hi there, thanks for viewing this post, in which Jake has kindly given me the opportunity to talk about and show off my Imperial Guard army, the Vanitor 501st.

Why the Imperial Guard?

The gripping narrative! Humble humans fighting the uncountable enemies of the Emperor, the ever-looming presence of the warp, the political and military structures of the Imperium and the beautiful grimdark aesthetics.

I started, as I usually do with my hobby projects by, writing a back-story. It creates the answers to future challenges like colour-scheme, conversions and army composition.

The 501st hail from the smoke covered hive city named Vanitor on the planet Prominus IV. Ruled by the noble van Hoff family, hive Vanitor has grown to be one of the main manufactorum hives in the system, delivering massive amounts of weapons and promethium to war-fronts around the sector.

Having written my backstory I knew I wanted industrial-looking rank-and-file guardsmen and women for the Hive Vanitor troopers. The standard GW troops were not an option from a visual standpoint, so I looked for third-party producers. And I found the greatcoat models of Anvil Industry. Combined with Skitarii vanguard helmets, they visualised exactly how I imagined my Vanitor soldiers. 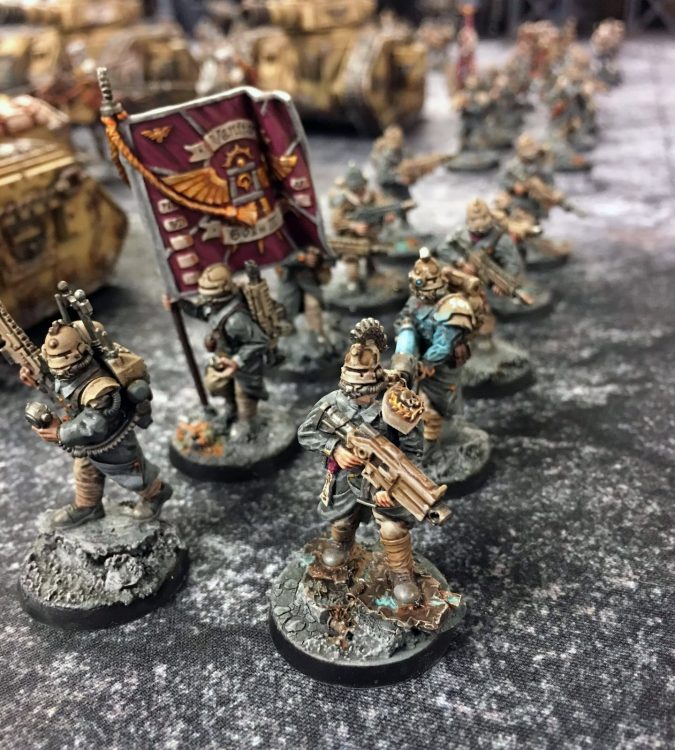 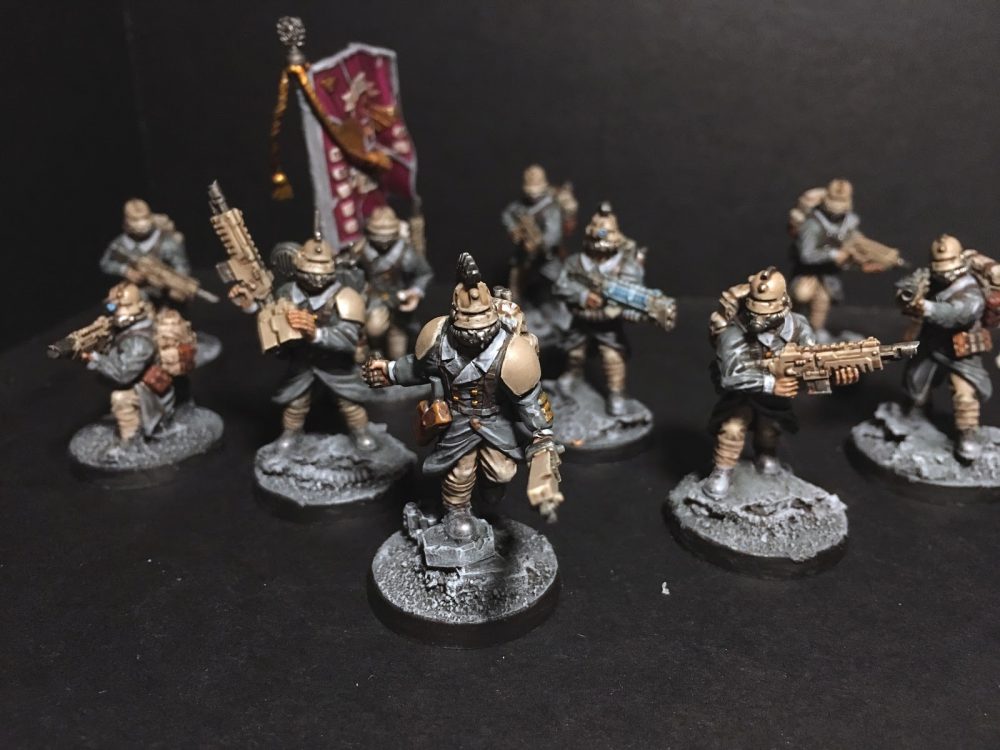 Now the Ash Waste Nomads took me a long time. Sketching the models, gathering the bits, deciding on the paint job. It was a blast! And I feel they complement each other very well. Even though the models look so different compared to the Vanitor troops. The paint-scheme and consistency bring the army together. I actually got the push I needed to make these from participating in the Iron Sleet invitational. 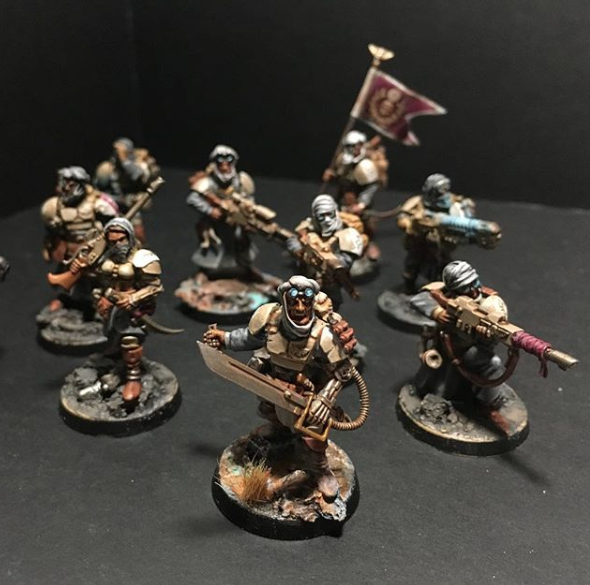 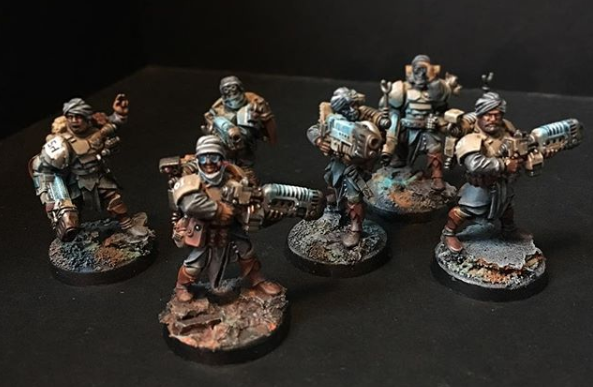 Wilhelm van Hoff, the Company Commander of the 501st was a great conversion challenge. I tried to envision an angry older man with a boat-load of experience. A true commander. Guiding his troops to victory from the safety of a command bunker.

Bits: He is built from a Commander body, Scion greatcoat, Bretonnia legs, Flagellant head, Sisters of Silence shoulder pad and a servo skull. 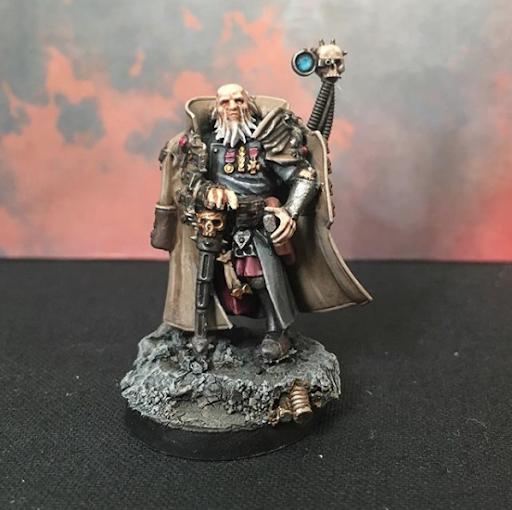 After Wilhelm, I wanted a commander with a strong contrast to Wilhelm. A female Company Commander that had a more lead-from-the-front style. Better armoured and equipped for close combat.

Bits: Isabella Holtz was built with the Inquisitor Greyfax model, 30k Marine head-crest, Ruststalker blade and Sisters of Silence shoulder pad. Ingame I usually run her with the blade of conquest which is by now nicknamed ‘Greenskinner’. 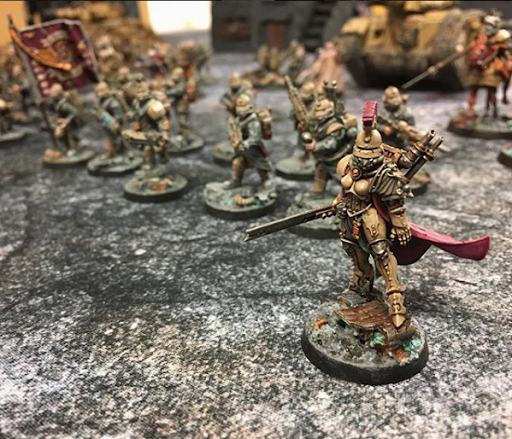 My third commander had to come from the Ash Wastes and the challenge was to keep him in style with the other nomads while still being a leader and easily distinguishable on the tabletop. I imagined a Power Fist would help with that, and a dynamic pose of course. 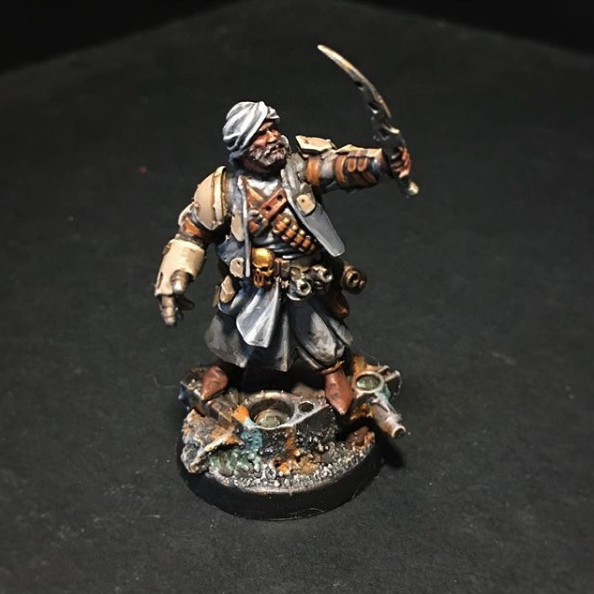 The most honorable tasks in the 501st is carrying the regimental standard into battle. In short succession come the squad banner bearers of Hive Vanitor. If they fall, and fall they will, their fellow soldiers will go above and beyond to recapture and raise the banners of the 501st from the ashes.

From my Warhammer fantasy days, I have kept the love for banners in every unit. It was a great modelling opportunity and helped tie in the third-party models into the 40k universe. I am especially proud of the regimental standard. Many hours of planning and painting really paid off! 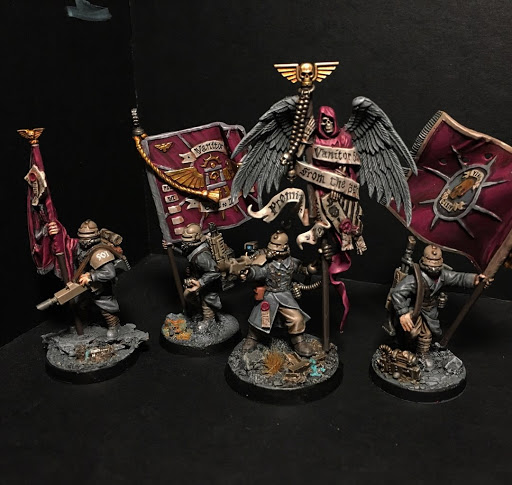 A unit of stormtroopers (Scions) was a fun project. I have always thought the metal Kasrkin are amazing models. My challenge was to try and recreate them with plastic and resin. Using Anvil Industry armoured legs, Cadian bodies, helmets and rebreathers I got pretty close. I finished the squad with a re-imagination of the bald Kasrkin sergeant. 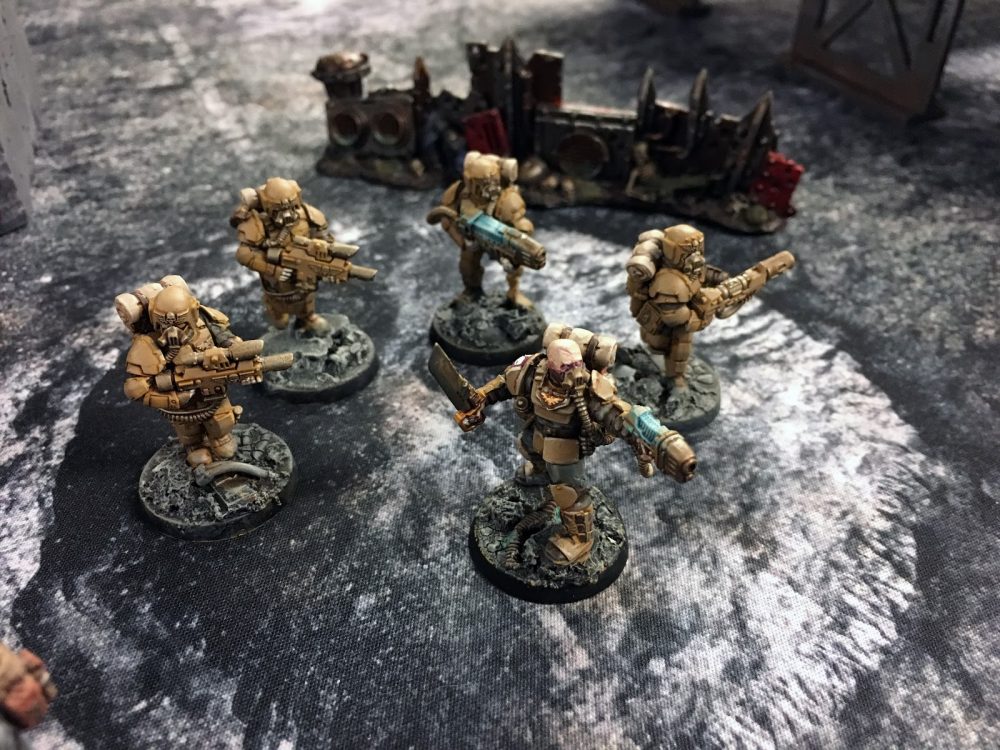 An absolute favourite unit of mine, which I have been wanting to make for a LONG time. Rough Riders, from the Ash Wastes. The concept was to create really fast, ambush like horsemen that oozed speed. After a lot of sketching, looking for inspiration and bits, I started the project. Which in my eyes turned out very close to my original idea! Link to a tutorial how I made them: https://www.instagram.com/p/BeNc7MDAxOk/ 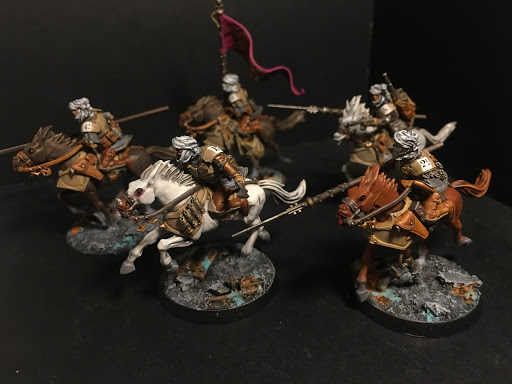 Creepy Astropaths to assist the army with some much needed psychic support. I tried to make them pretty grimdark and suspicious looking. On the edge of heretical. 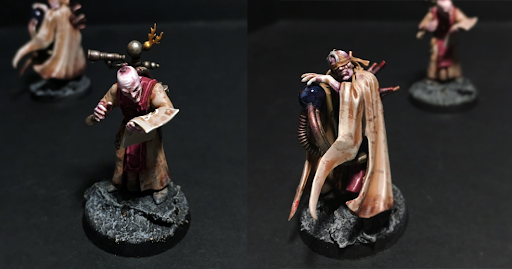 My vehicles were another challenge, as I hadn’t painted any tanks before. After some experimentation, I decided to paint them in a light paint-scheme to make experiments with weathering more pronounced. Though a bit rough around the edges, I’m happy with the final results of weathering, weathering pigments and a detailed use of decals. 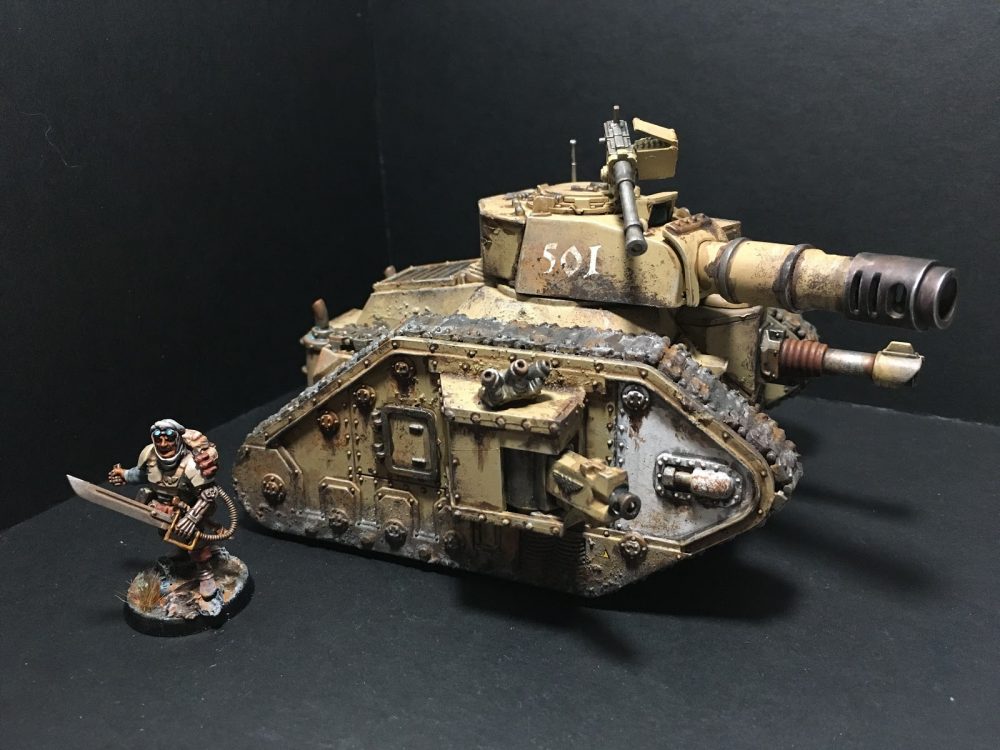 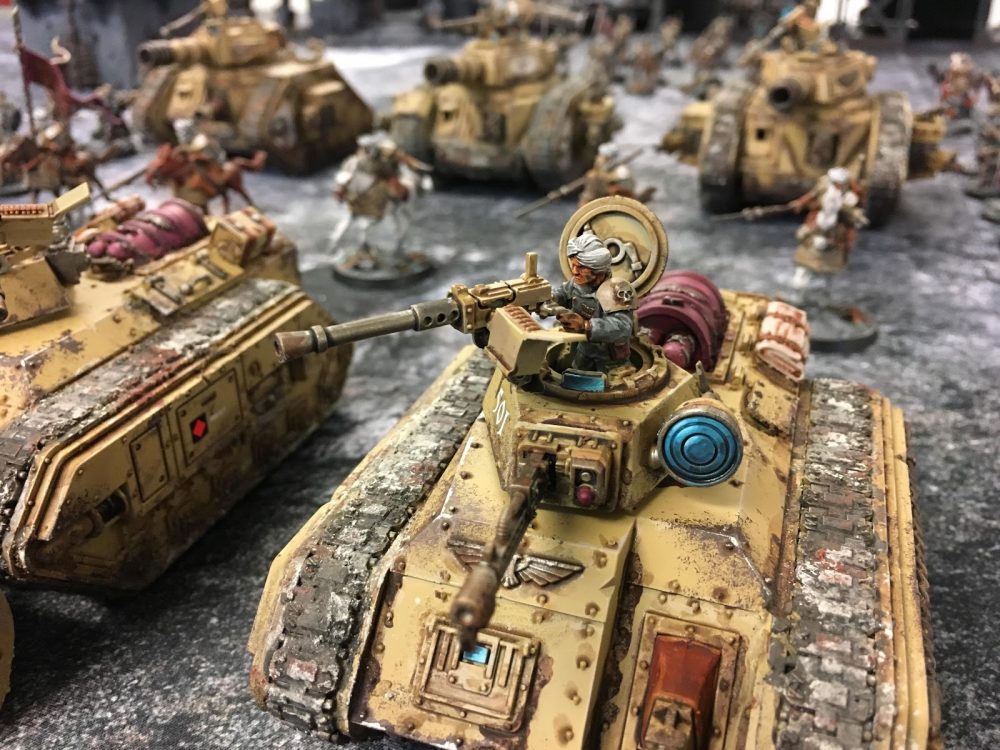 Thanks for reading and thanks to Jake for hosting this post! Let me know if you have any questions about conversions or painting schemes and if you want to see more/read more about my army, the best place to do just that is https://www.instagram.com/prominusiv/ 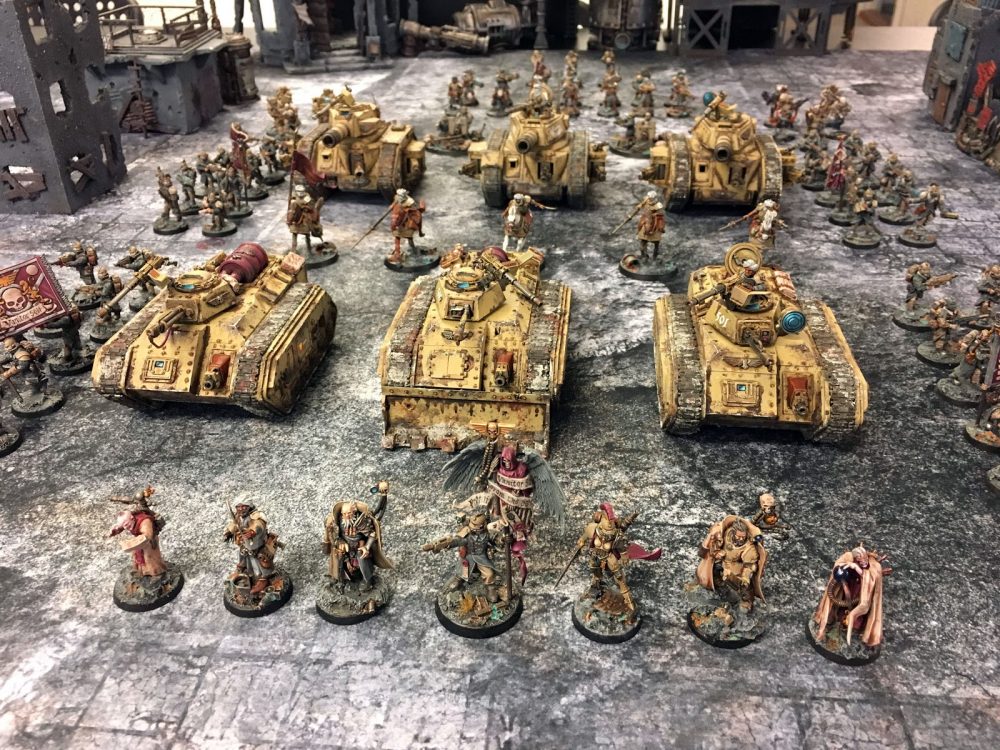 Finally, if you have an amazing looking army and want to showcase it here on Cadian Shock – then please do get in touch!

All images in this article. 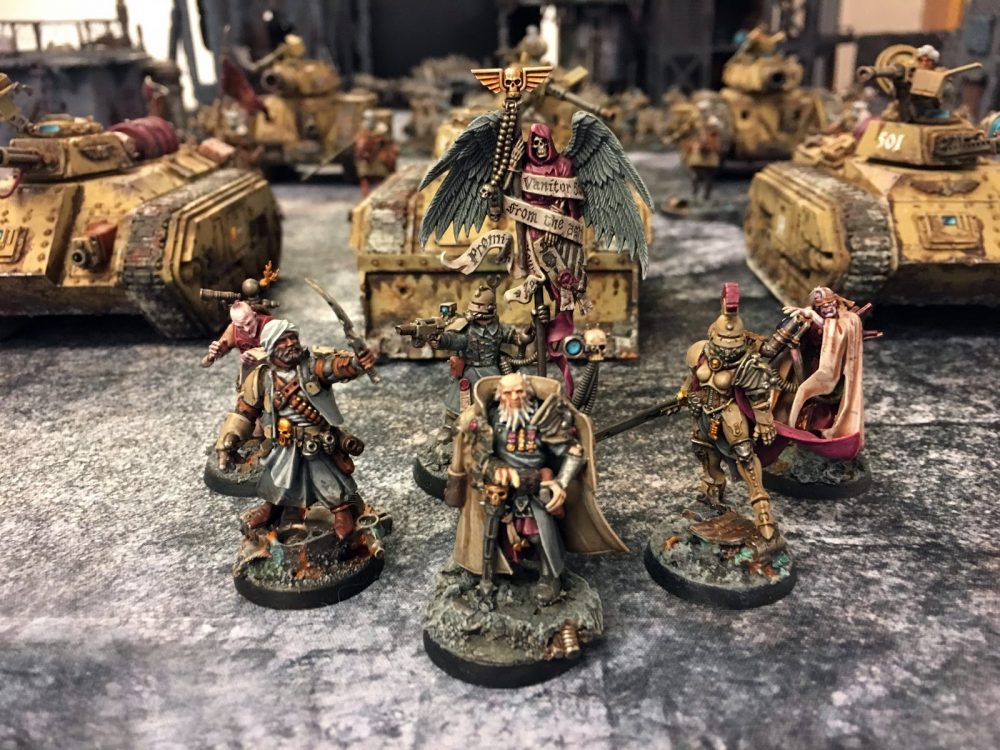