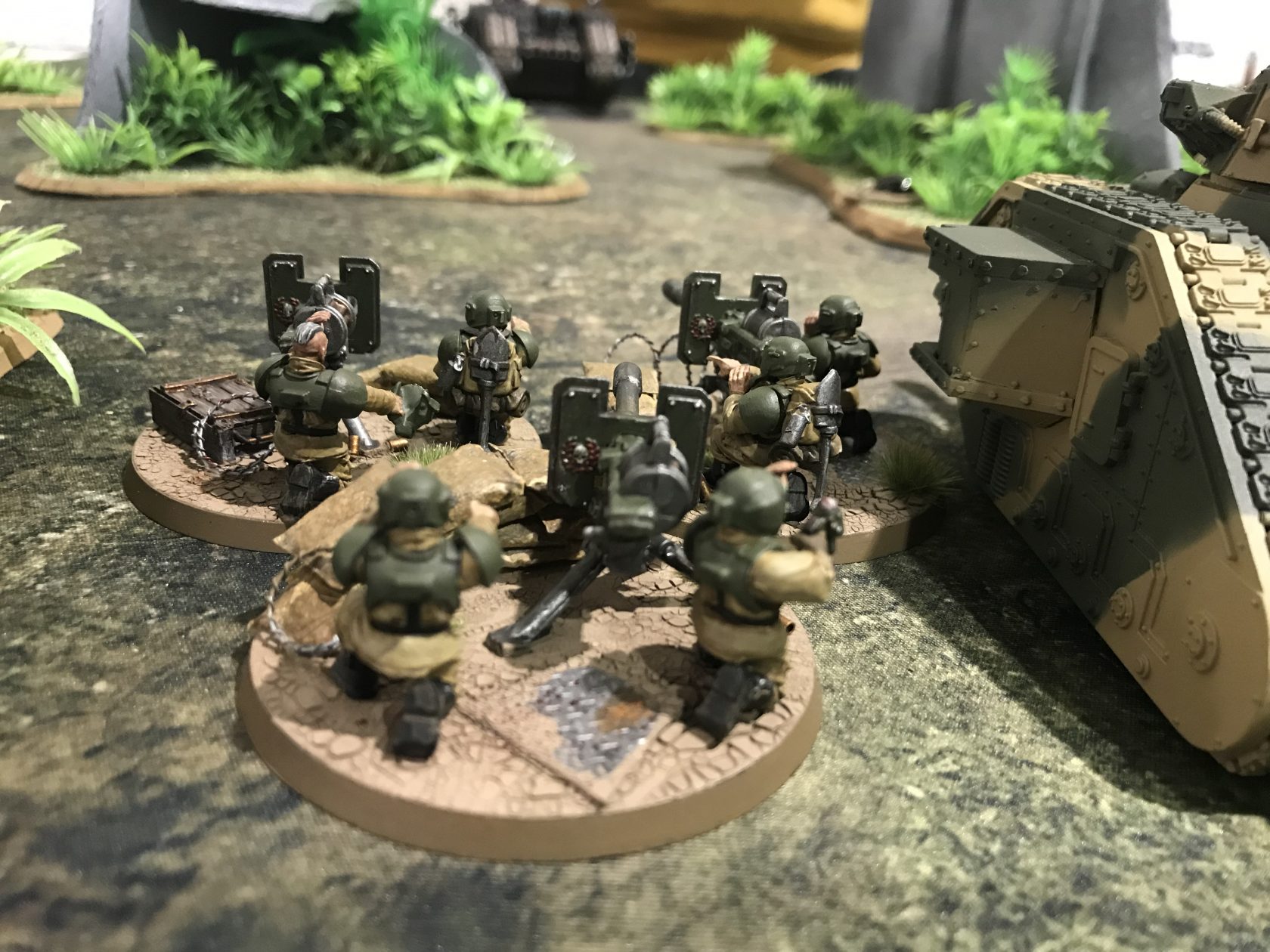 Let us take an in-depth look at the Lascannon and Missile Launcher...

This article about Lascannons and Missile Launchers was a request via the chat on this blog. As is so often the case with Warhammer 40K there are layers of understanding to any ability, rule, unit or weapon – the Lascannon and Missile Launcher are no exception to this. Also, yes I know, the photo is Autocannons!

Firstly I couldn’t find any Stratagems, rules, orders or abilities that specifically affect Lascannons or Missile Launchers. Neither has an advantage or disadvantage in that respect.

Equally, both Lascannons and Missile Launchers can be taken in the same units and circumstances. That is because I’m solely talking about these heavy weapons in the context of infantry. Rather than sponsons or hull mounted weapons on vehicles.

They have similar points values, but different enough to make the decision to take one or the other pretty tough.

With the ground rules out of the way, let us proceed.

We have the Frag Missile for dealing with lightly armoured unit’s;

And we have the Krak Missile which is anti-armour;

The points difference means that for 60 points you can take 3 Lascannons or 4 Missile Launchers.

Now we have our weapon profiles how we decide on which to take and which to leave behind.

In larger point games you could bring a mix of both of course. But so often we don’t have the luxury of throwing around points on units that might be worthwhile. And now we have the Vigilus Specialist Detachments, we will be trying to cram those into our lists too. Making points even more precious.

The most obvious conclusion to draw from the two stat lines is that the Missile Launcher has an anti-infantry capability that the Lascannon cannot match.

Using MathHammer we can see that from a Heavy Weapons Team of 4 Missile Launchers we will kill on average 3.111 enemy models that are Toughness 3 and have a 5+ save. Using the same target with 3 Lascannons we kill an average of 1 enemy model.

The Lascannon seems like the clear choice for anti-armour because of its increased Strength and increased AP value. Again using MathHammer – 3 Lascannons against a vehicle with Toughness 7 and a 3+ Save does on average 2.917 damage.

The difference is pretty small and I was surprised. But the lower Strength does not matter here because our Strength of 8 is still higher than the target’s Toughness of 7. The only real disadvantage in this instance of using a Krak Missile over the Lascannon is the AP-2 rather than AP-3. But this seems to be undone by having an extra shot.

We have a couple of orders we can put into good use for our Lascannons and Missile Launchers.

Take Aim is an obvious choice as it allows us to re-roll ones – or all misses if you’re a Cadian that has not moved. This is especially useful for Krak Missiles and Lascannon shots that will miss 50% of the time.

Bring It Down allows us to re-roll ones to wound.

Cadian springs to mind right away for those re-rolls of one.

Nuno in the comments has very kindly provided the following for Regiments… thanks!

Now in a more what regiment gives the most for this type of choice. The regiments I consider the best would be, Cadia, Valhallan, Vostroyan, Armageddon and Militarum Tempestus.

Now this regiment I find it really amusing because of the order “Fire on My Command”, and you can shot enemies that are engaged with your units, I would say this would be a good choice especially for Missle Launchers if nothing else to disentangle your vehicles from pesky infantry.

This one is something I would consider Missile Launchers as well, because it allows for a mechanized army, keeping your infantry always inside your Chimeras, the order to embark after shooting would give options to disembark, shoot, get back inside the vehicle, so it increases movement and survivability for your squads, additionally the stratagem gives you the re-rolls to hit on 1 after disembarking. On this faction again my choice would be Missile Launchers, since its a mechanized group you should already have a decent anti-tank with your own tanks, and Missile Launchers would be a good way to have a lot of anti-infantry shots with the added bonus to try to finish some heavy groups when needed.

This group I would favour Lascannons, because the order to re-roll all wounds on vehicles and monsters, although the missile launcher can be also nice for the stratagem Superior intelligence, that if someone deep strikes within 12 of the unit you can fire at them with a minus 1 to hit.

This is the regiment I find the most amusing to think, since by nature both Lascannons and Missile Launchers have a plus 6 in range, making it harder to get outside their range, additionally the 1CP stratagem makes them hit with a plus 1, so they are 3 plus to hit if they don’t move and 4 to hit if they move, giving them a good chances to do damage, and they have amusing order that allows them to fire at enemies that are engaging them in melee – with any type of weapon. This is probably another group that I would favour the Missile Launchers at base value, plus one to hit if enemy engages them you can fire the weapon to melee. Although if the army needs the extra armour cracking the Lascannons will do really well because extra range meaning your enemy will have a hard time putting their big stuff away from them.

So my suggestion is that if you don’t need an extra punch and require versatility, Missile Launchers, but if you need more anti-armour, Lascannons.

Also right now I am a bit more partial to Missile Launchers for 2 reasons. Since Chapter Approved they are cheaper and the second one is the rise of invulnerable armour saves, it makes the -3AP not so relevant. Again this is my reasoning.

I always overlook Vengence for Cadia when fighting Chaos. I must remember it. For 1 CP you can re-roll all failed hits and wounds against a Chaos unit for one of your units when shooting or in Overwatch. Using this with 4 Krak Missiles we can up our average damage to 7.374.

The Old Grudges Warlord Trait is very powerful for use with both weapon types as it allows you to re-roll wounds against one target you nominate at the start of the battle.

Ravenwing14 on Reddit makes the point that really only Knights matter in this analysis. Well maybe, but I have played against zero Knights in my 5+ years of the hobby. So whether Knights matter or not depends entirely on who you play. But yes, they seem to be prevalent in some groups so they do matter…

With Knights in mind – for our 60 points who have 3 Lascannons (which are not Cadian) that are BS4+, they are re-rolling ones from Take Aim and they are re-rolling Wounds from Old Grudges. This gives us an average of 3.63 damage. The Invulnerable Save on the Knight removes our great AP of -3.

Krak Missiles fair a little better if you have 4 of them, causing 4.083 damage on average.

It seems that the Missile Launchers comes out on top for taking out the most frequently seen vehicle chassis of T7 and 3+ save. Which was a surprise? If you’re taking on bigger things like Land Raiders or Knights then the Lascannon will outperform the Krak Missile.

What is clear is that the more stuff you layer onto these weapons the better they get.

If you’re fighting a regular army that has a mix of unit types then the Missile Launcher is a more useful and versatile option with only a minor downside. The one lower point of Strength only comes into play if you’re fighting against enemy models with a Toughness of 8. At Toughness 7 you’re still wounding on a 3+, just like a Lascannon it. The AP-2 is annoying though as this means your enemy will make 16.667% more saves then they would against the Lascannon.

Another thing worth noting is that if you think you are going to be fairly mobile in a game then Missile Launchers offer another slight advantage. A Frag Missile has multiple shots and so mitigates some of the -1 to hit when you move and fire a heavy weapon. You have more shots to try and get a hit. Granted it’s not as powerful as a Krak Missile – but when you have to move for some reason you can target Frag onto enemy infantry and hope for the best. Rather than watch 3 Lascannon shots all miss because you’re hitting on a 5+.

And so there you have it. I think I will paint up my Missile Launchers soon for my Cadians as they seem like a handy and versatile extra for my force.