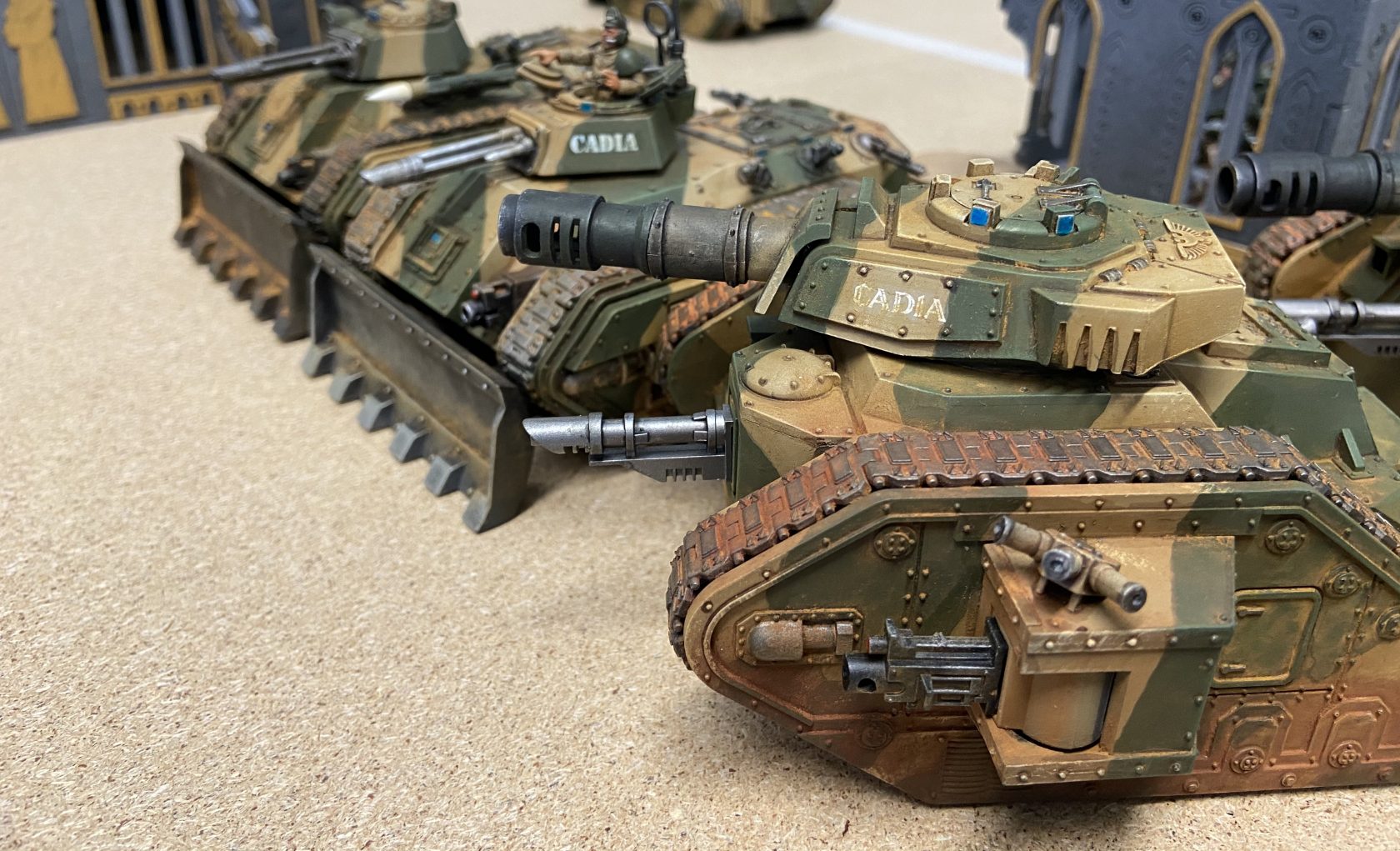 A re-match against the Death Guard today...

This is my second game of 9th Edition Warhammer 40K, Incursion Death Guard vs Astra Militarum – it might be my worst game yet…

I have taken the Jury-Rigged Repairs and Gunnery Experts Regimental Doctrines. 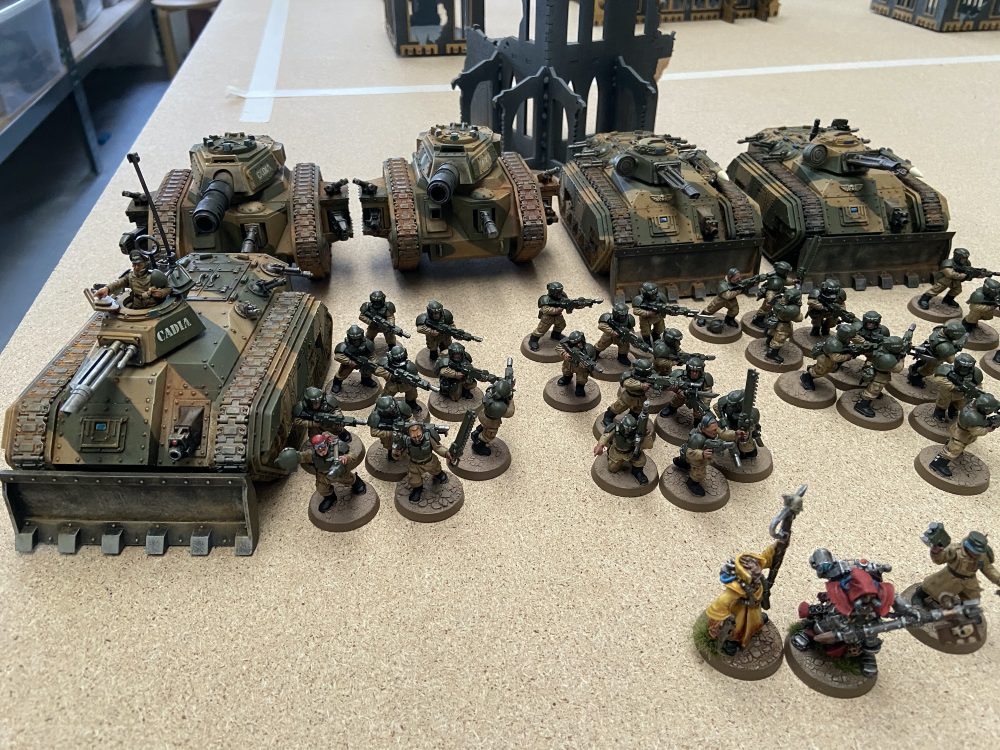 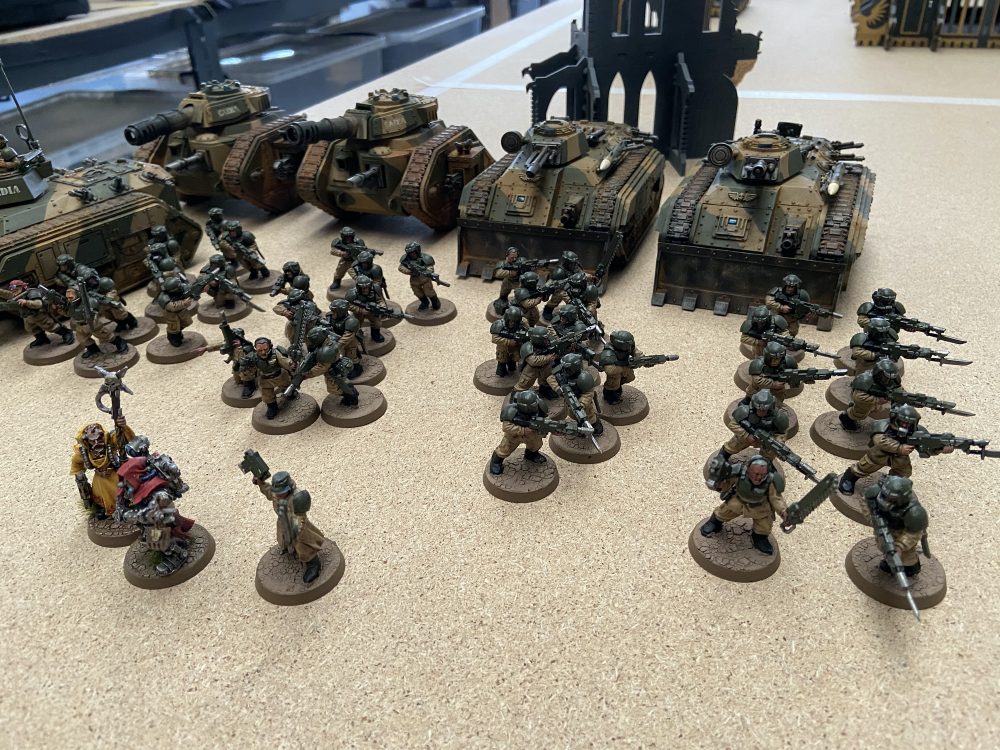 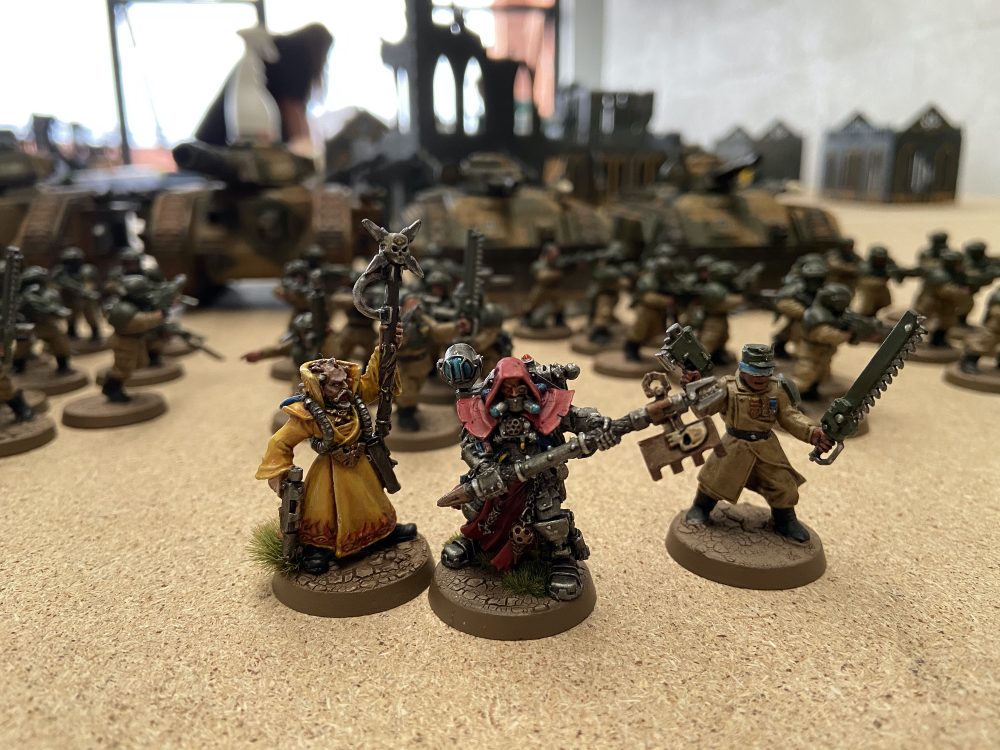 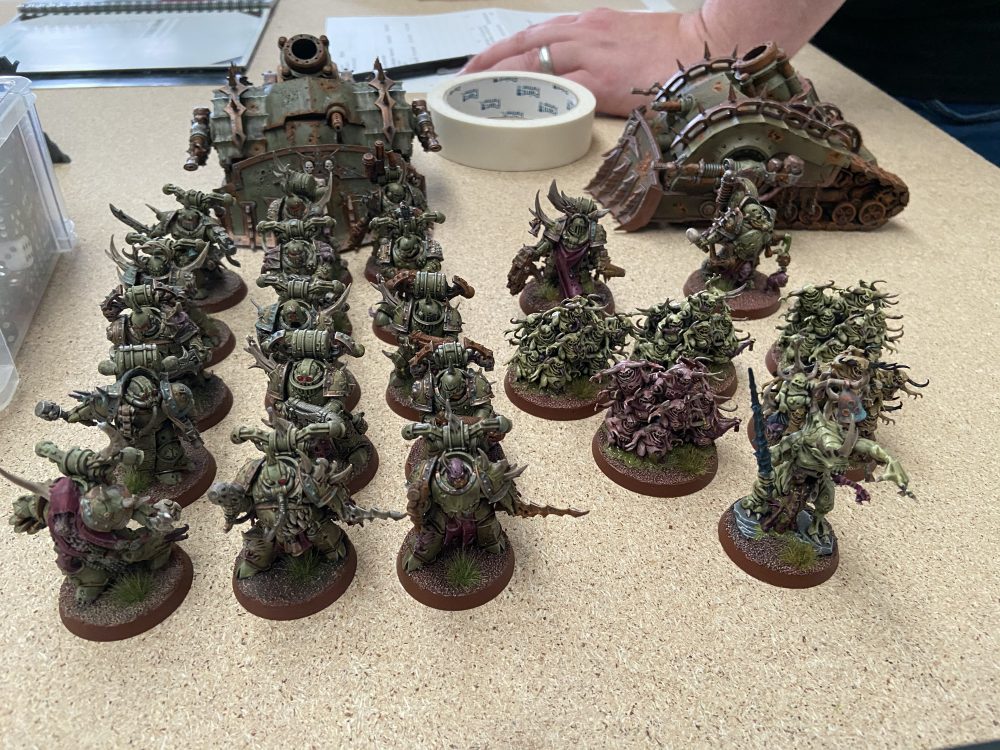 We played the Recon mission from the Grand Tournament 2020 book. IT uses Take & Hold and then a specific Secondary Objective, which I took and the Death Guard did not take.

I misread it and that cost me points. The Recon Sweep secondary requires an Action to be done at the start of your Movement phase, 9″ from the table centre. For each one of these Actions you complete in a table quarter you score points. For 1 table quarter is 3VP, for all 4 its 15VP – and 15 is the max like all Secondaries.

My mistake was that it was done at the start of your Movement phase. That meant moving an infantry unit to a table quarter, surviving a turn and then starting the action at the start of the next Movement phase. I did not realise this until my turn started – but no matter, I had Chimeras to transport my infantry and for them to hunker down inside of… 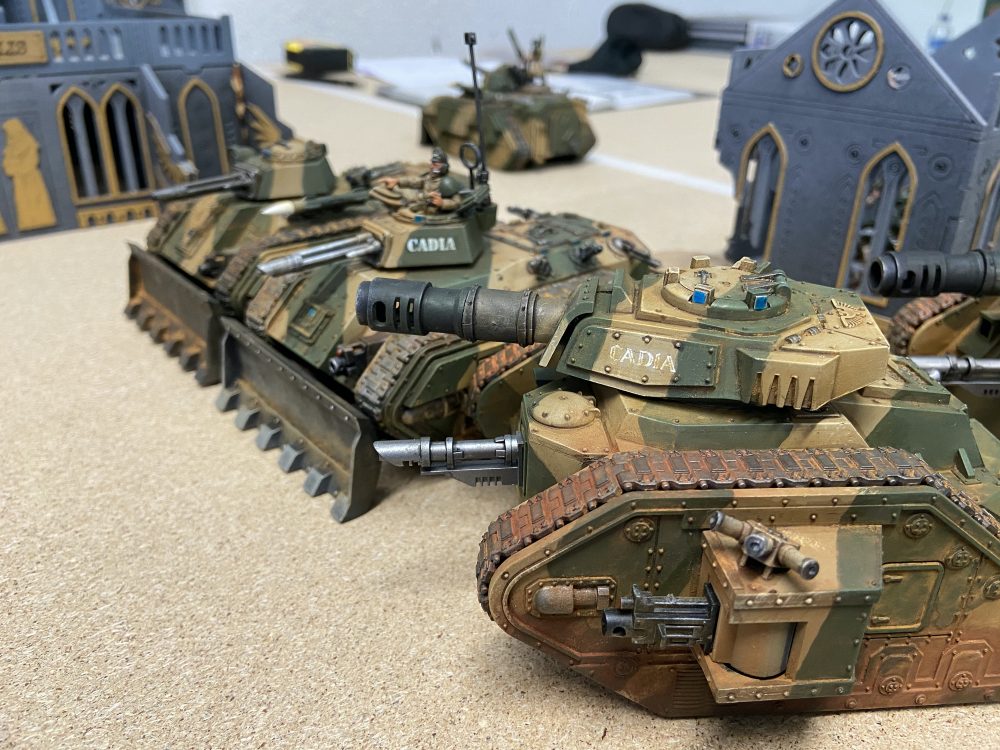 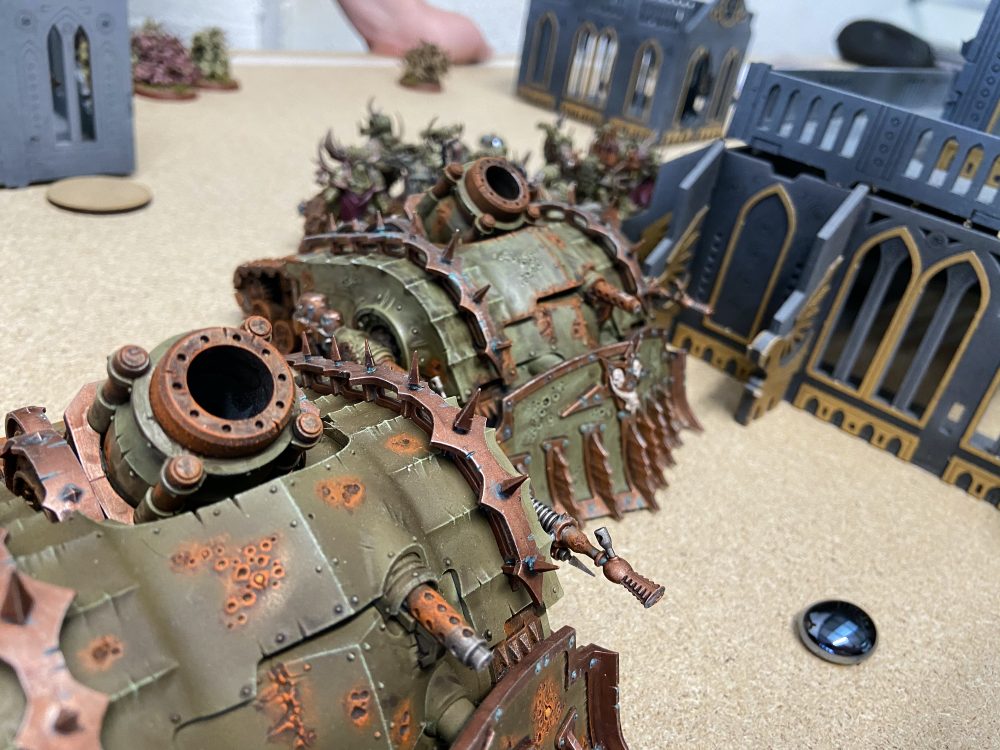 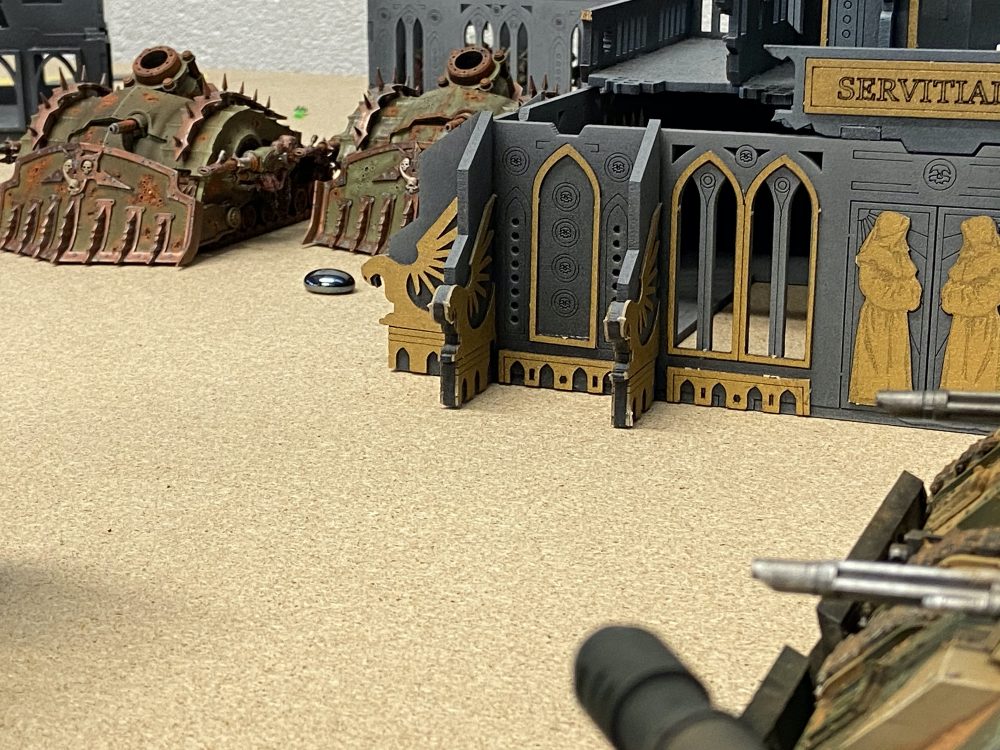 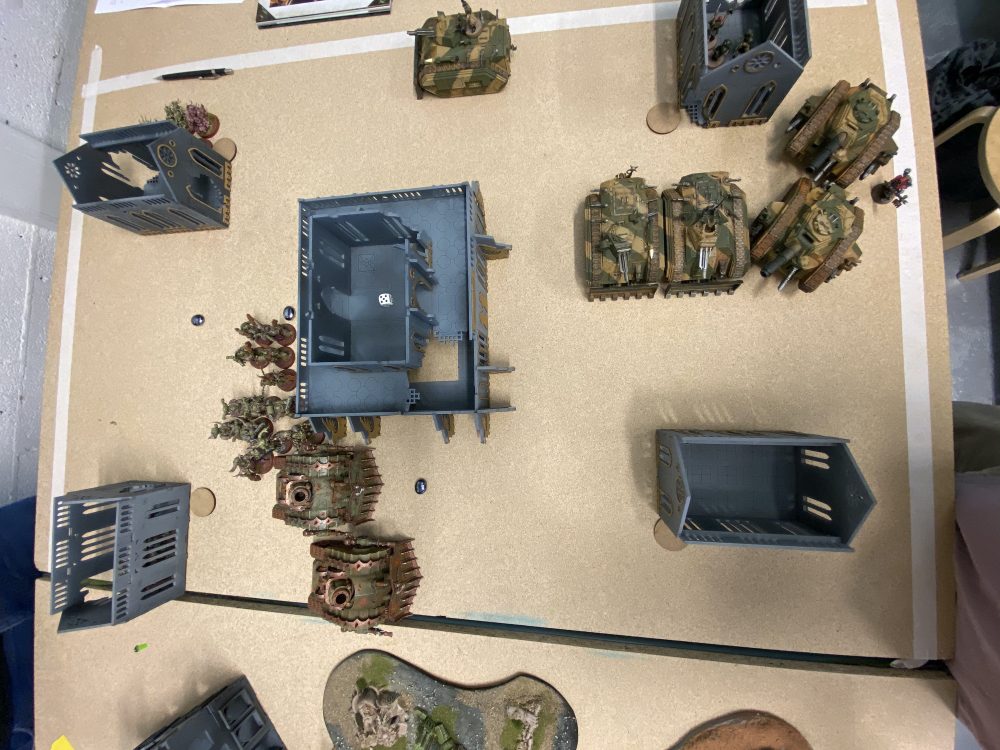 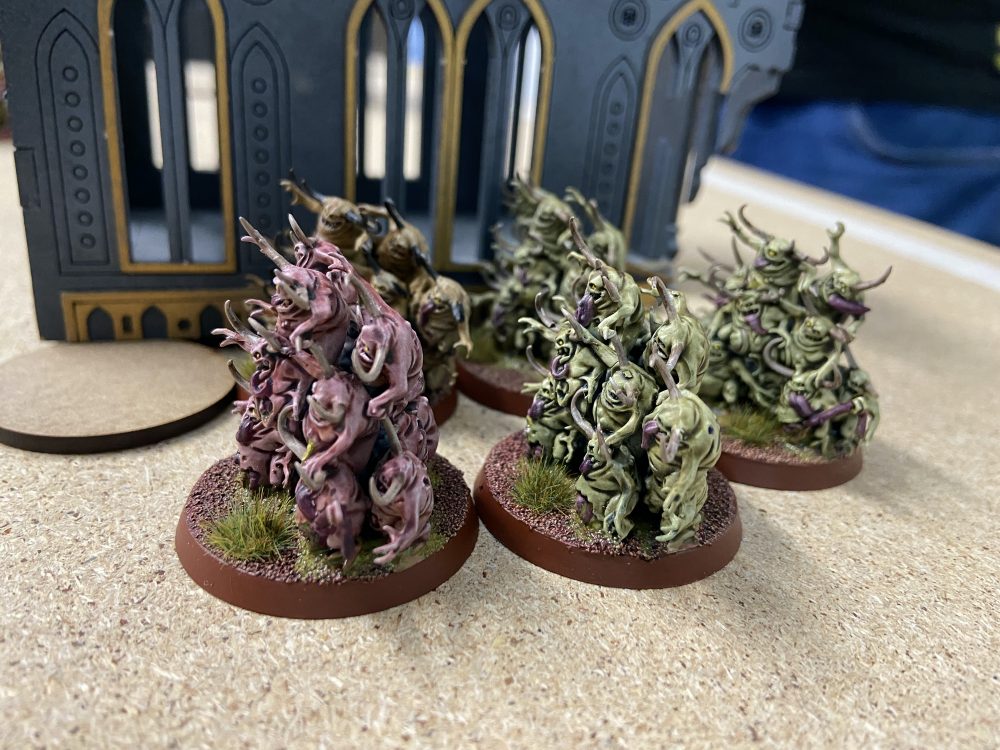 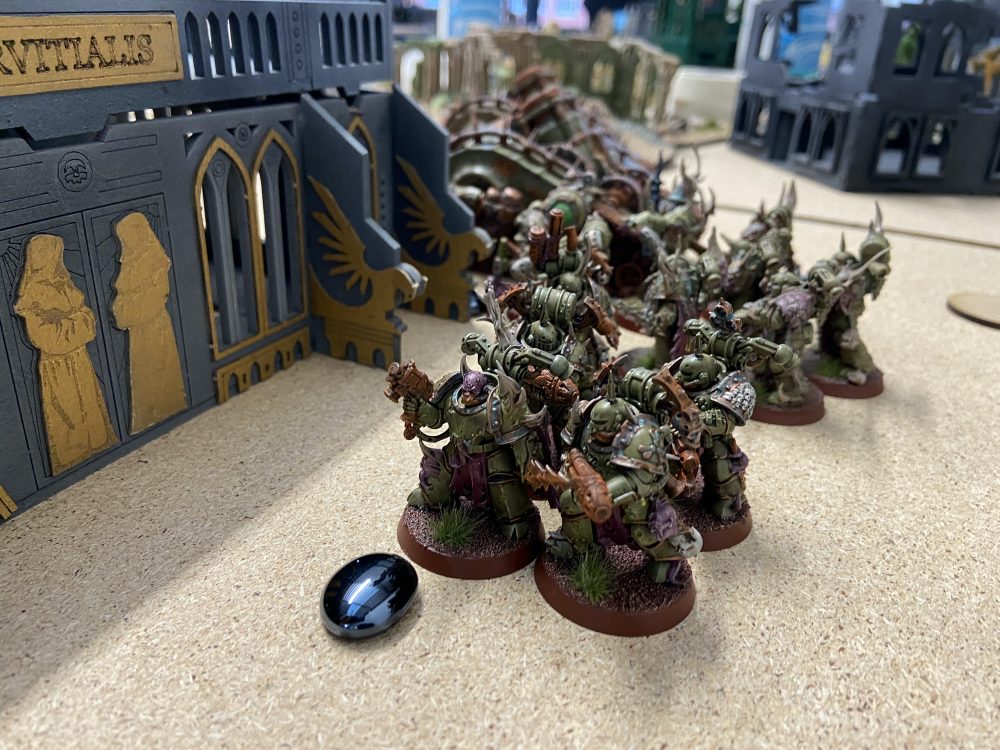 I got the first turn and I id the same as in my last game versus the Death Guard in 9th Edition – I moved froward to gather objectives and VPs early. I forgot Vengeance for Cadia on my Tank Commander – but after all my shooting I had done just 10 wounds to a Plagueburst Crawler (PBC), killed one Plague Marine and one Nurgling model. This was simply terrible, at this point, my army is at its most effective and after all my shooting and after shooting a Tank Commander and Leman Russ into a single enemy tank, it was not dead. The 4++ the PBCs had from the nearby character was hurting me terribly. The Tank Commander even used Hail of Fire to get the max of 12 shots on his Battle Cannon.

But I was up the board and my Troops were in Chimeras, ready to either be forced out or get out to start getting objectives in turn 2 for the Primary and also for Recon Sweep.

The Death Guard opened up and in a single turn destroyed all three Chimeras and then all the infantry inside. Some died to rolls of 1 when disembarking and one or two ran from Morale. But that was three Toughness 7, 3+ Save tanks destroyed and 75% of my destroyed in a single shooting phase. I was screwed from now on.

To put this into some form of perspective at how effective the Death Guard was – if you rolled perfectly for all their weapons and did max damage you would do 126 points of Damager. My force maxed out at about 148, with about 54 weak Lasgun shots from Lasguns and the Lasgun Arrays included in that total. My dead models added up to 60 wounds, so from the 126 total possible damage, the Death Guard did 60 ish wounds. About a 50% success rate.

I had a max output of 148 damage, I did 15 wounds, about a 10% success rate. I did have some awful rolls and Mark made some great saves. Something which happened again and again in this battle was the following;

This probably happened three or four times throughout the course of the game. 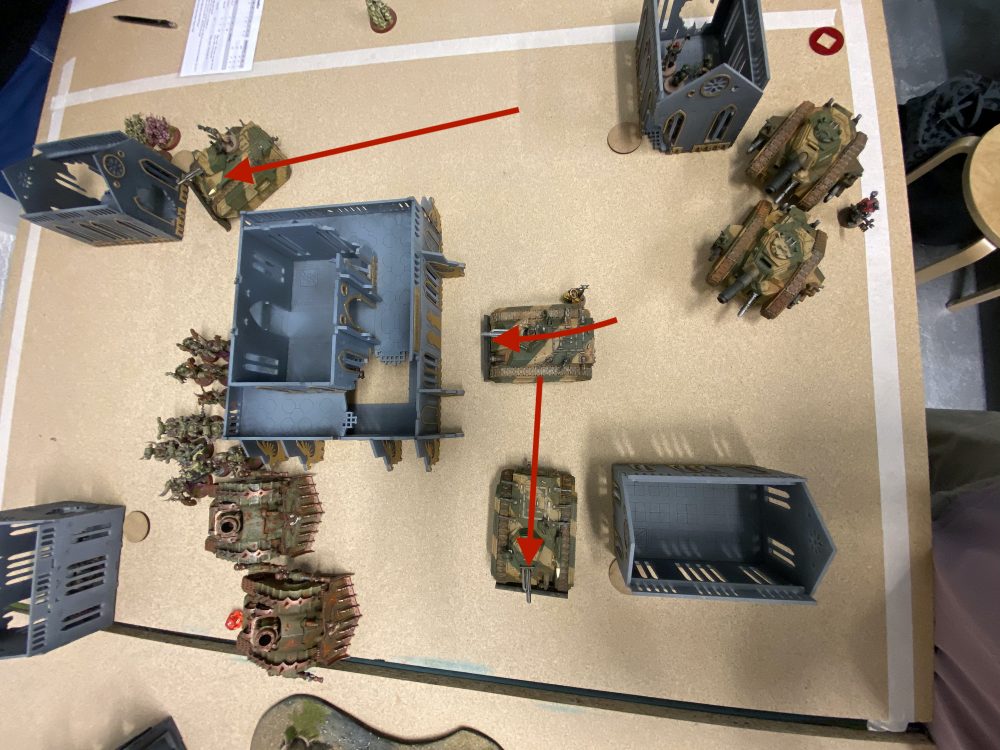 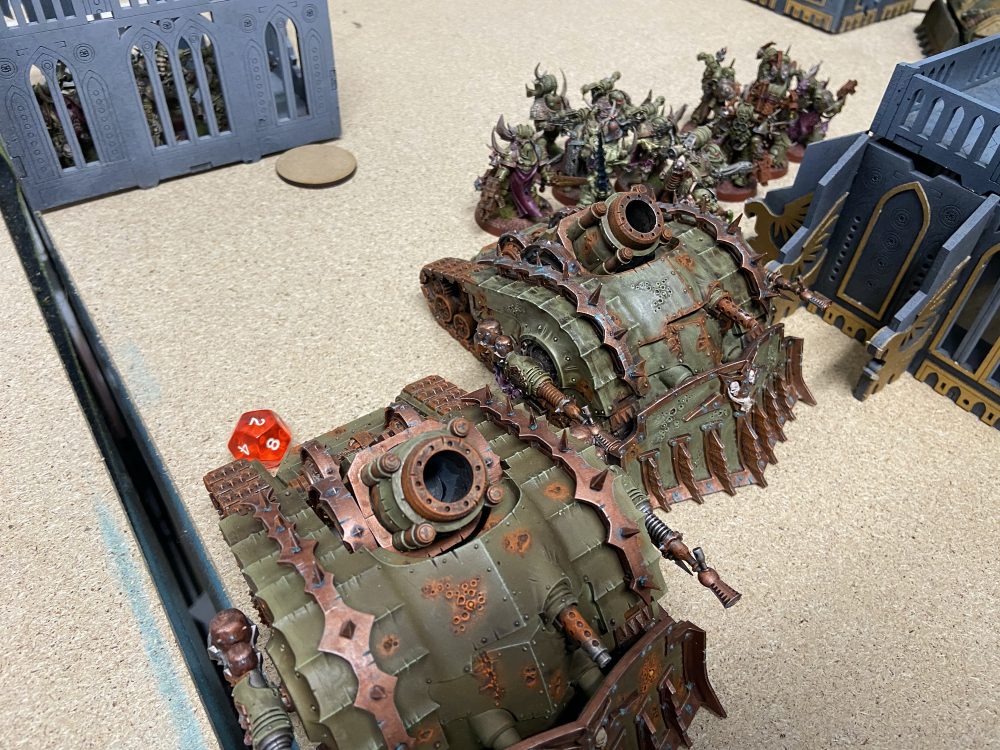 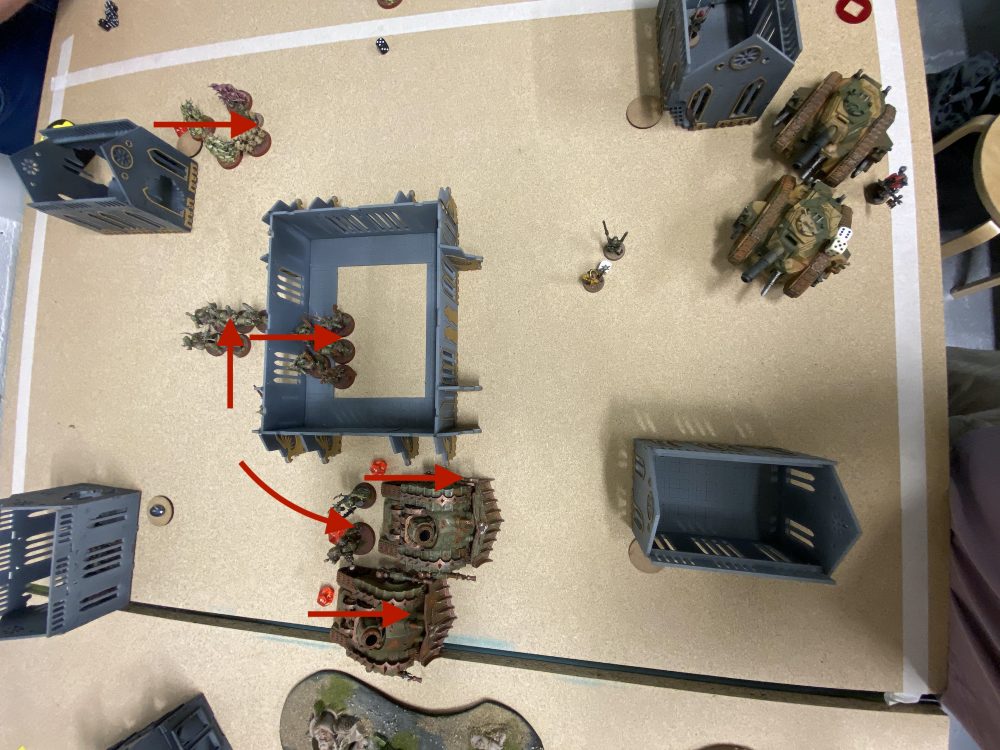 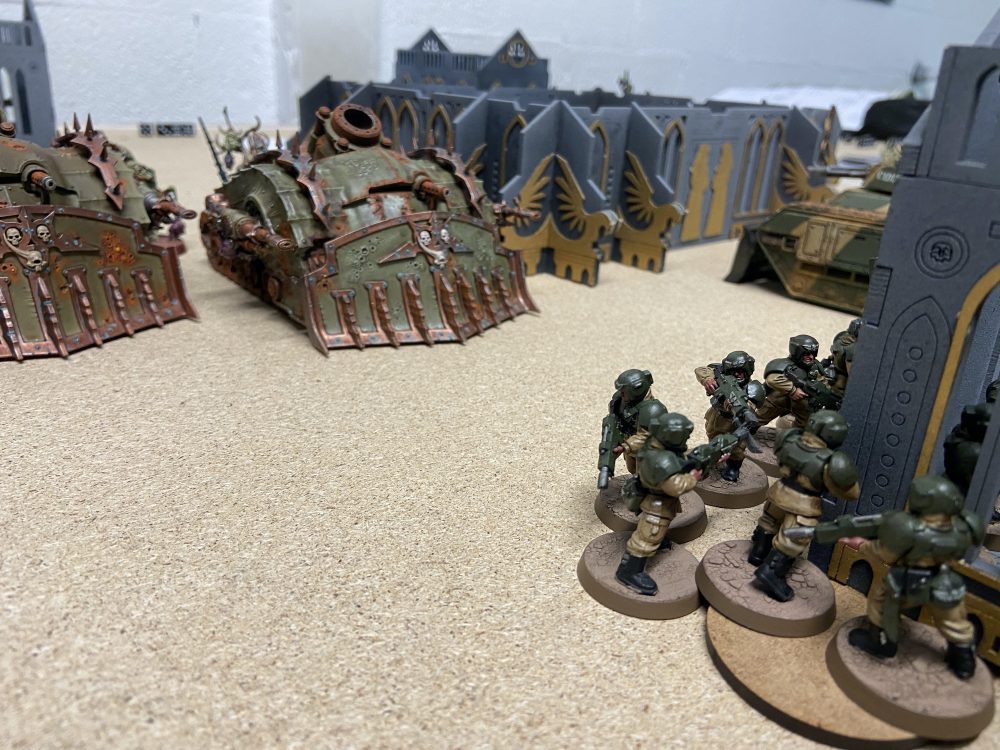 PBCs shooting up my poor Guardsmen 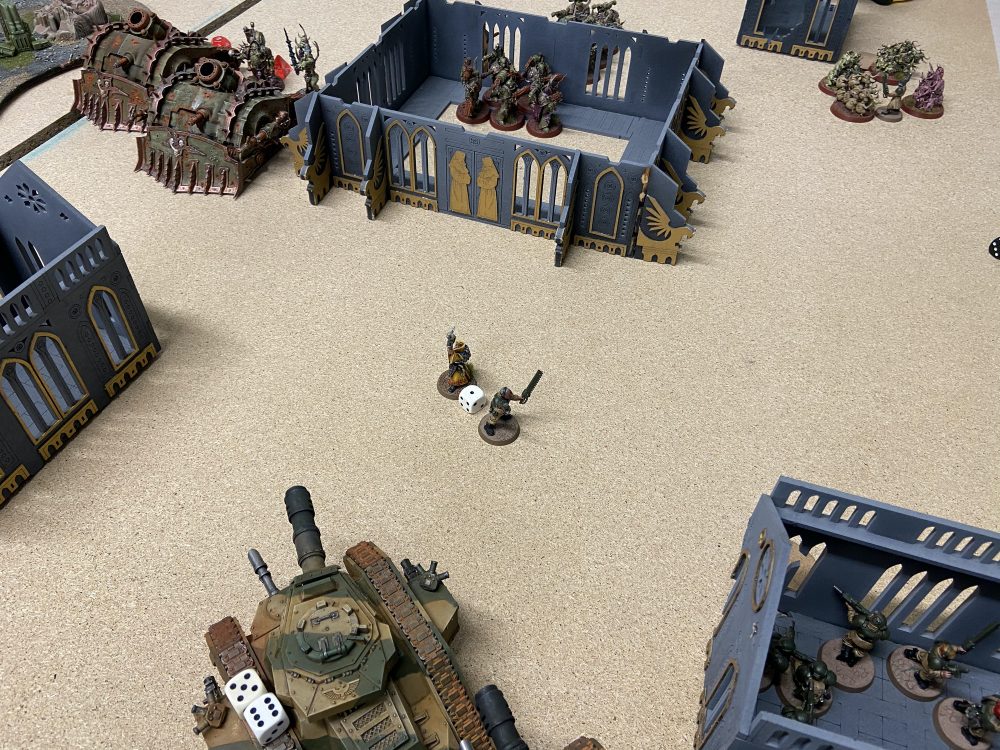 Now it is a case of how much will a lose by, a win is not possible as I have no way of getting to any of the objectives, I have no way getting to the table quarters for Engage On All Fronts and Recon Sweep.

My two remaining tanks are on full wounds thanks to Jury-Rigged Repairs, but this does not stop the onslaught. I remember Vengeance for Cadia and, you guessed it, did not kill a PBC again. One is on 1 wound and the other on 2 wounds. This does hurt their movement, but the auto hitting weapons can just delete my infantry with ease, despite the loss in BS. 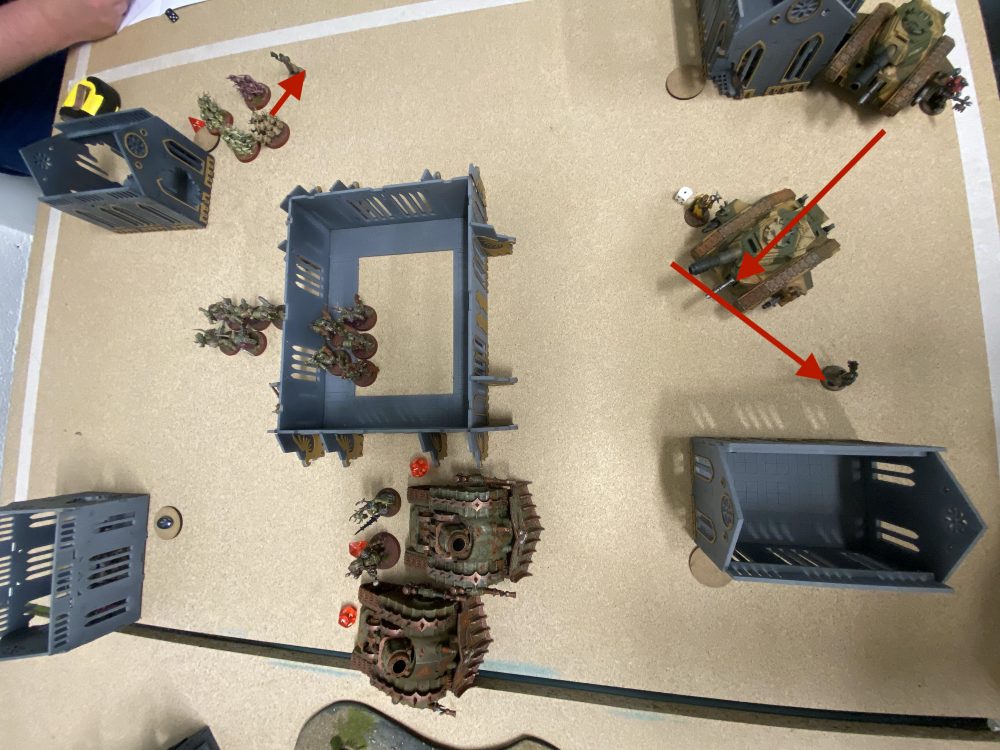 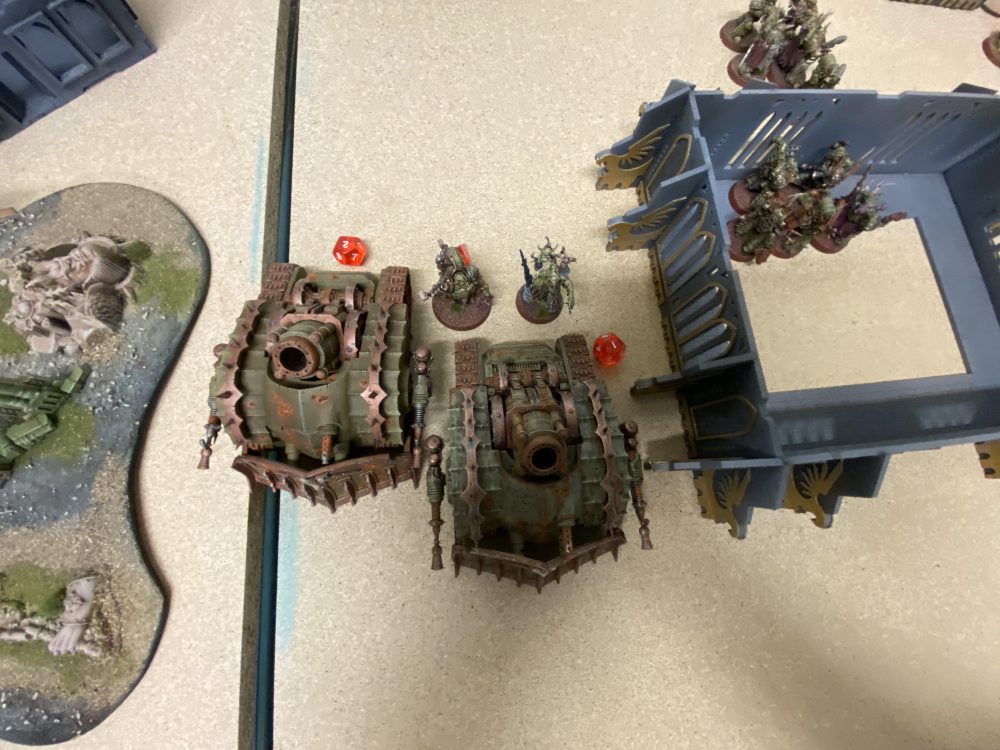 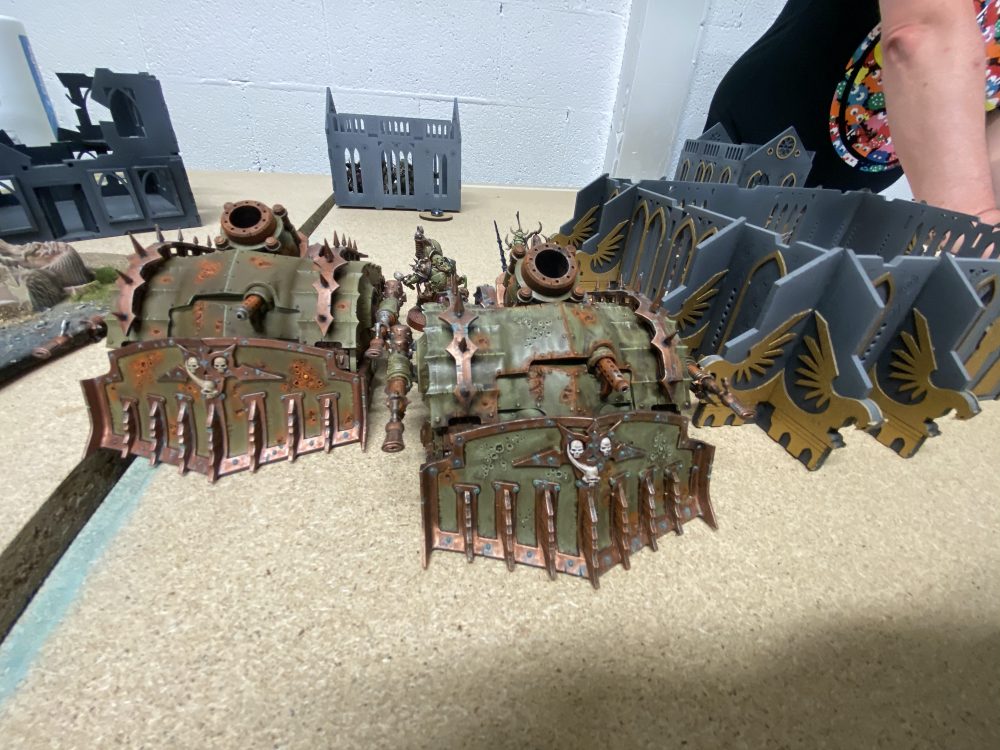 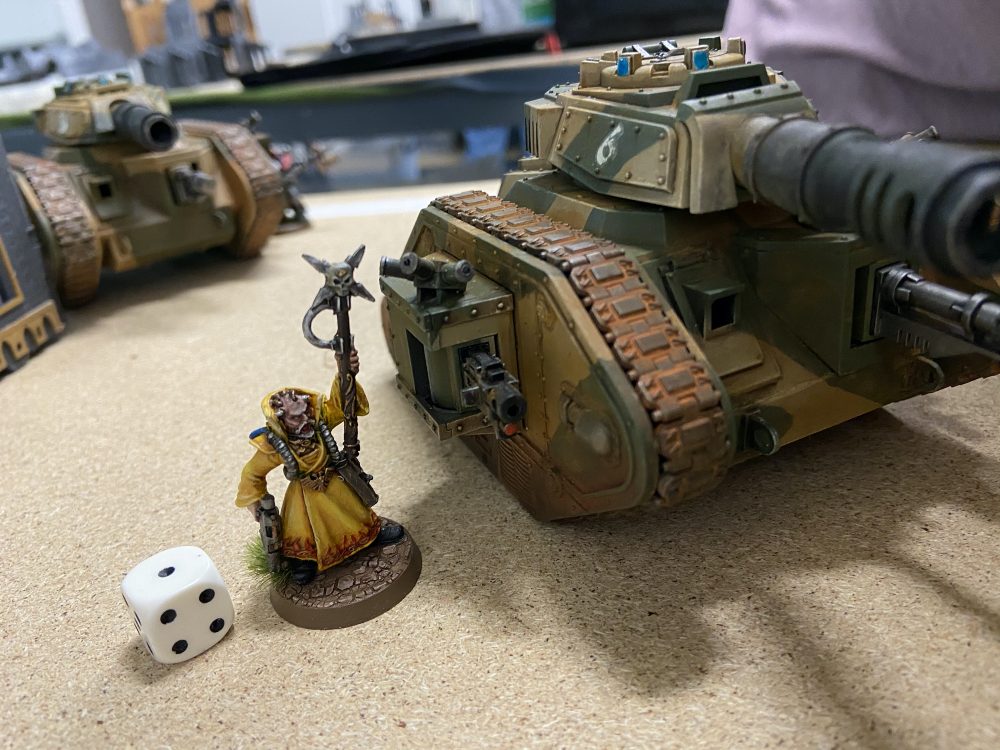 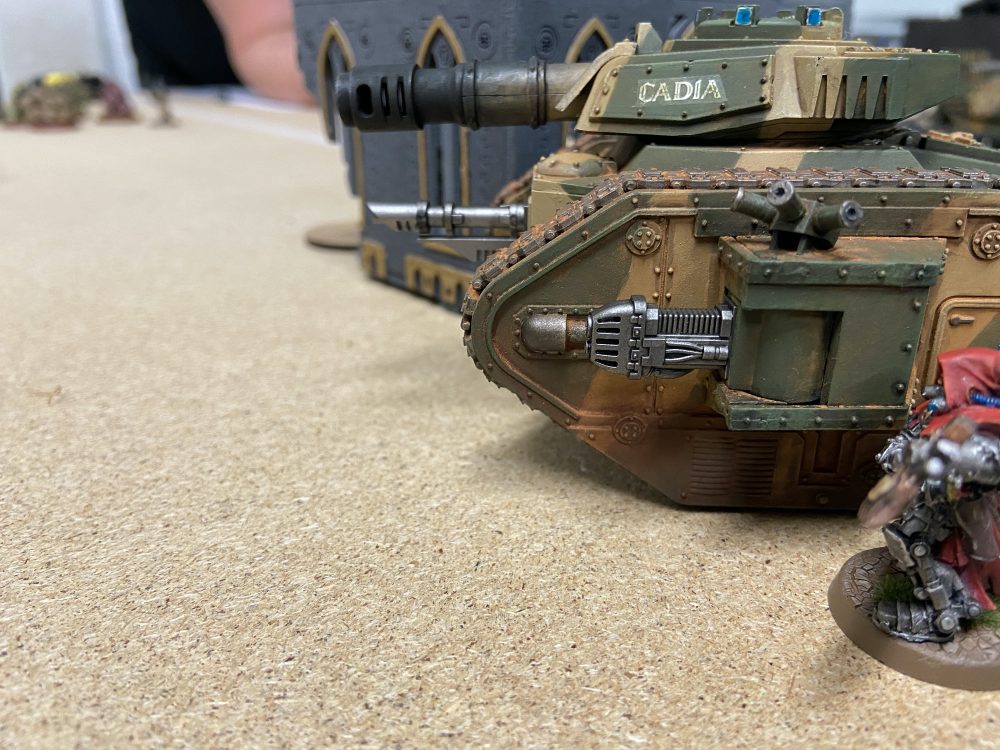 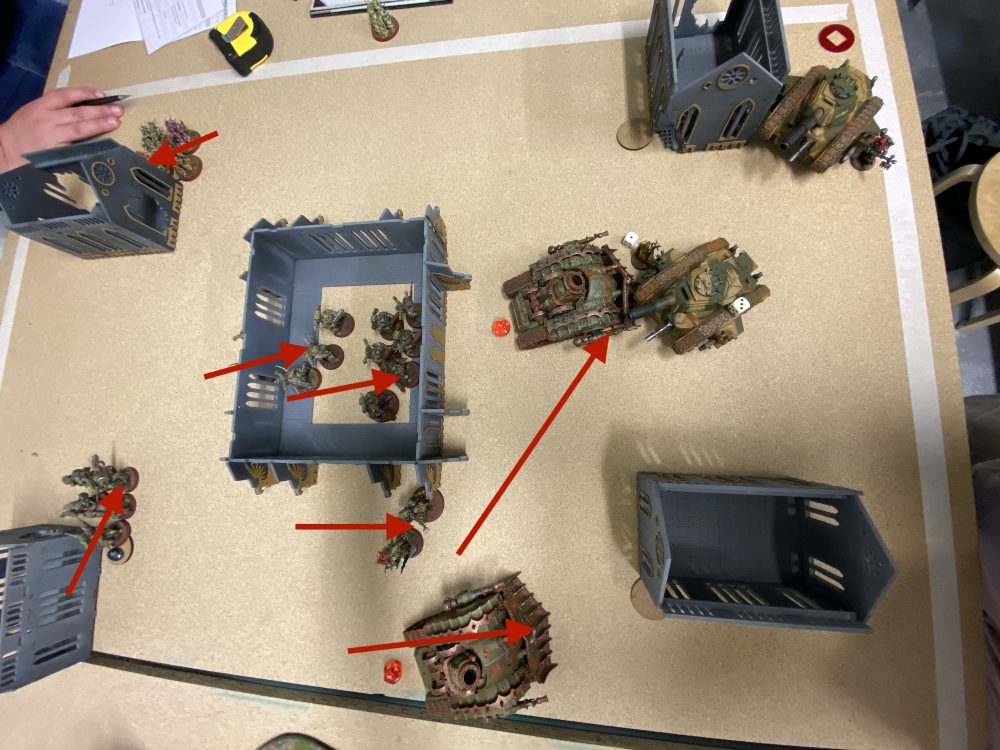 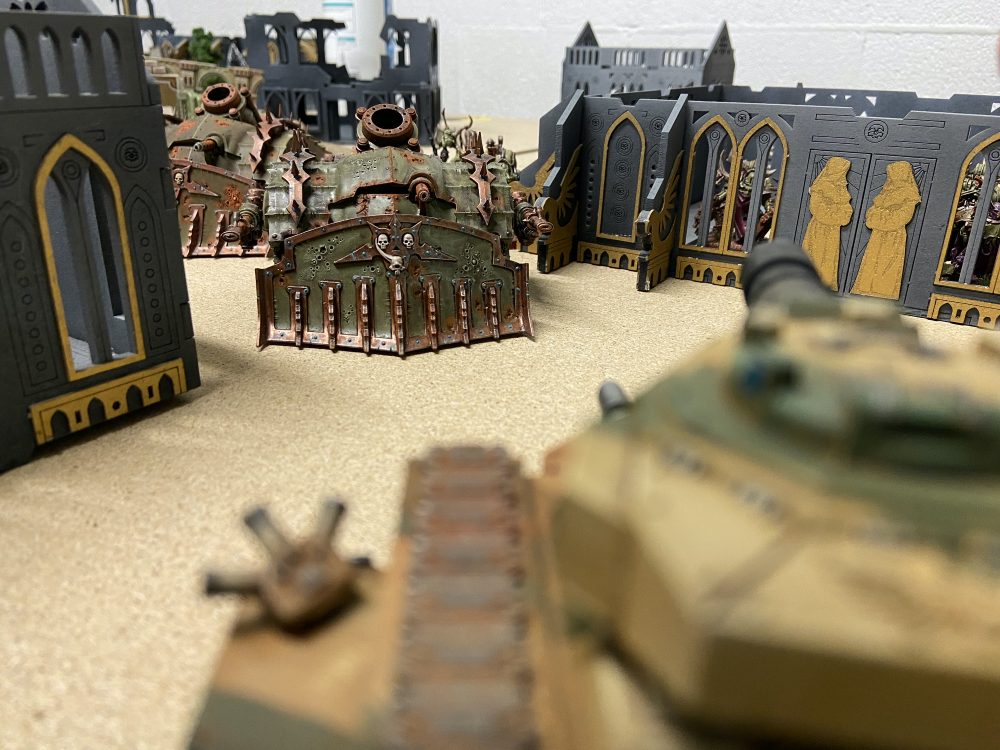 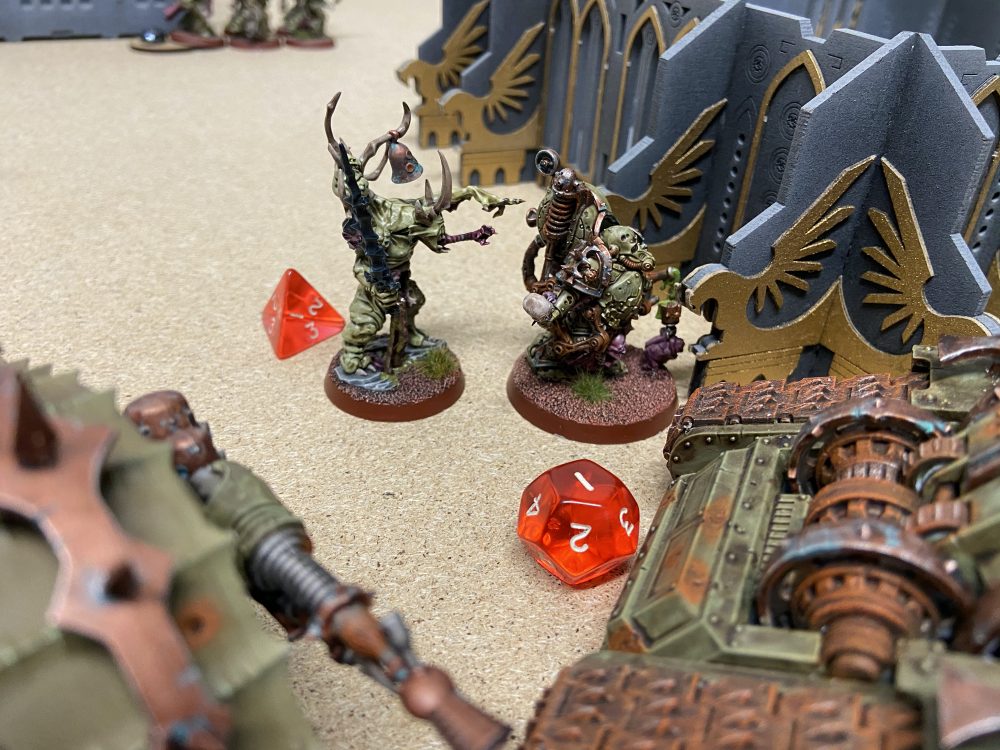 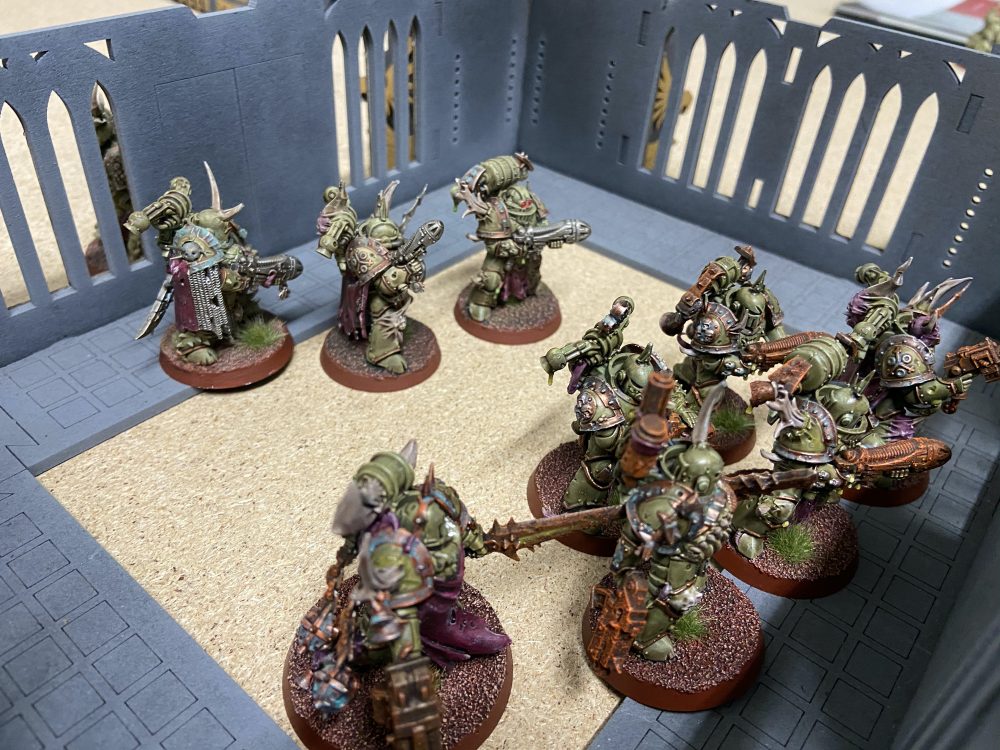 I am now down to my Tank Commander and two Guardsmen in a building.

The Death Guard just keep coming forward as I kill about two Plague Marines with a whole Tank Commander’s worth of shooting. He starts to take damage. 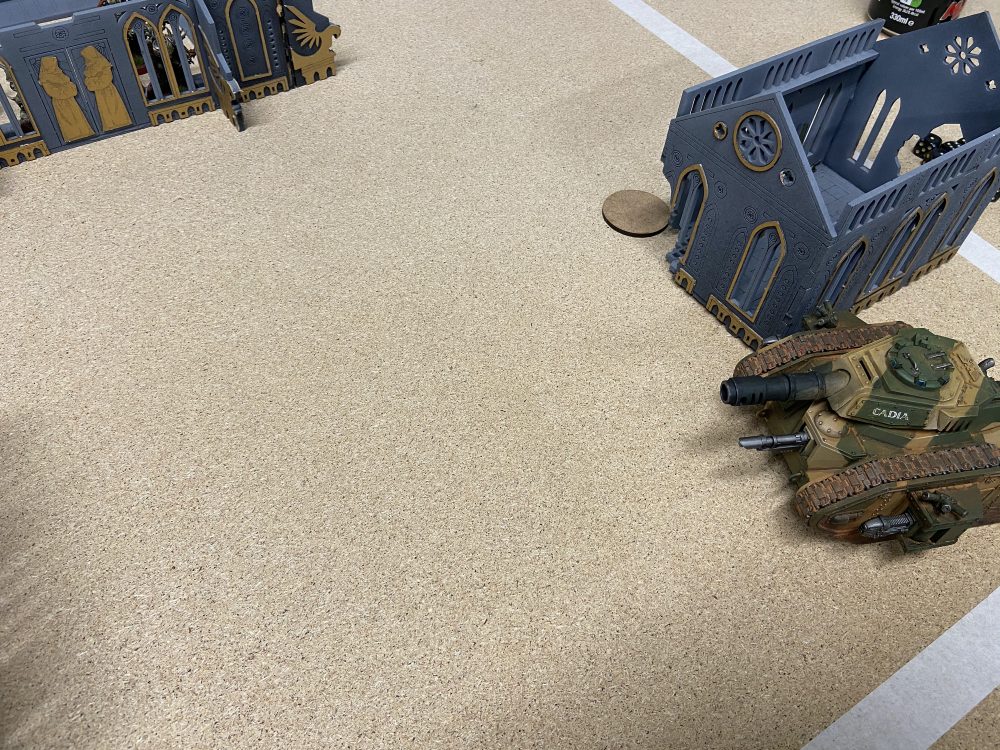 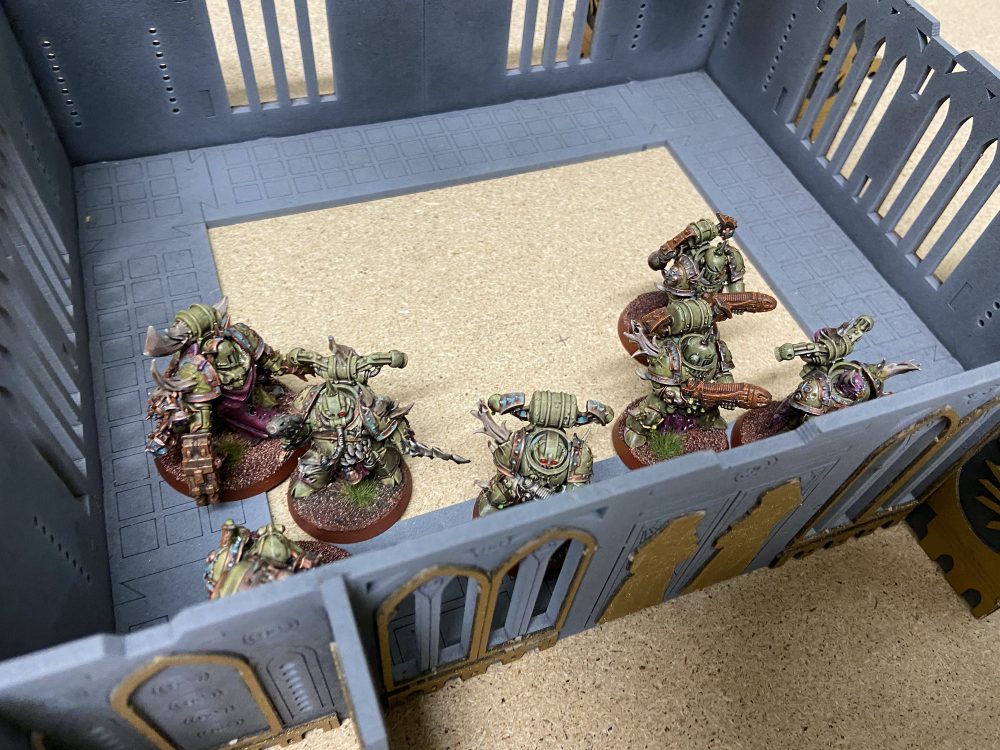 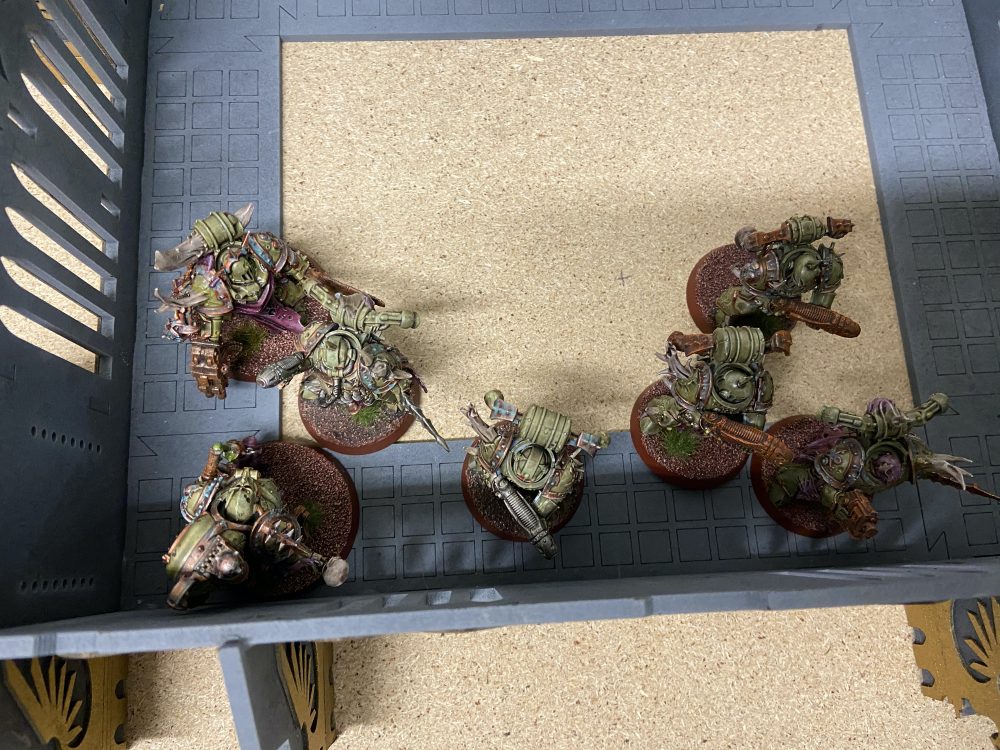 I lose my last Guardsmen and the Tank Commander takes more damage as the enemy move up. 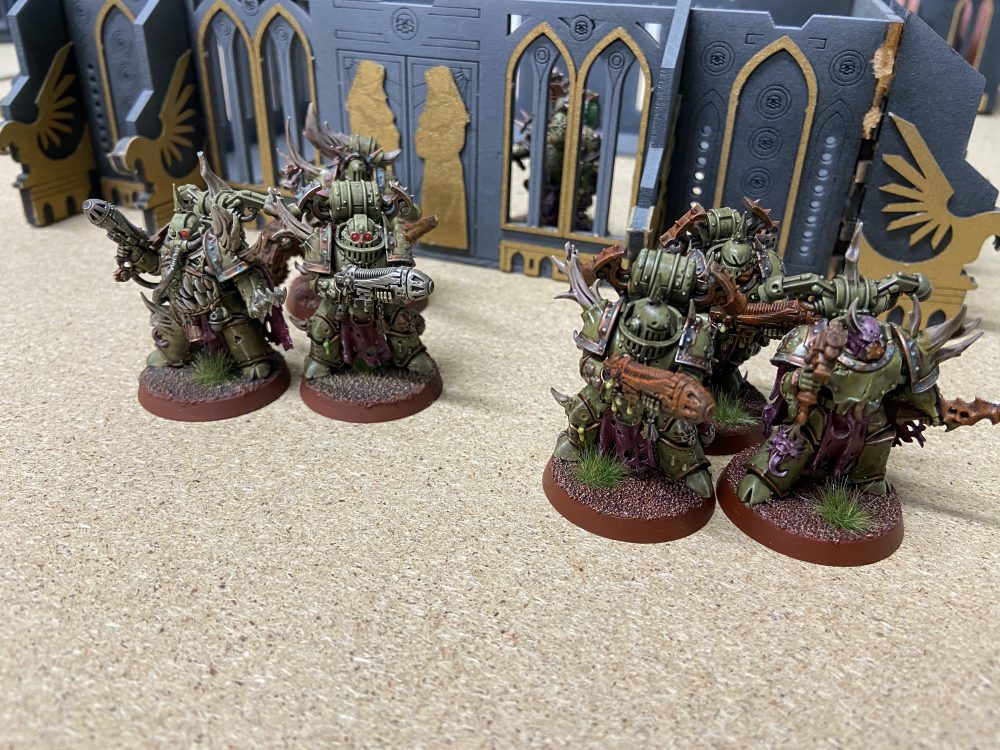 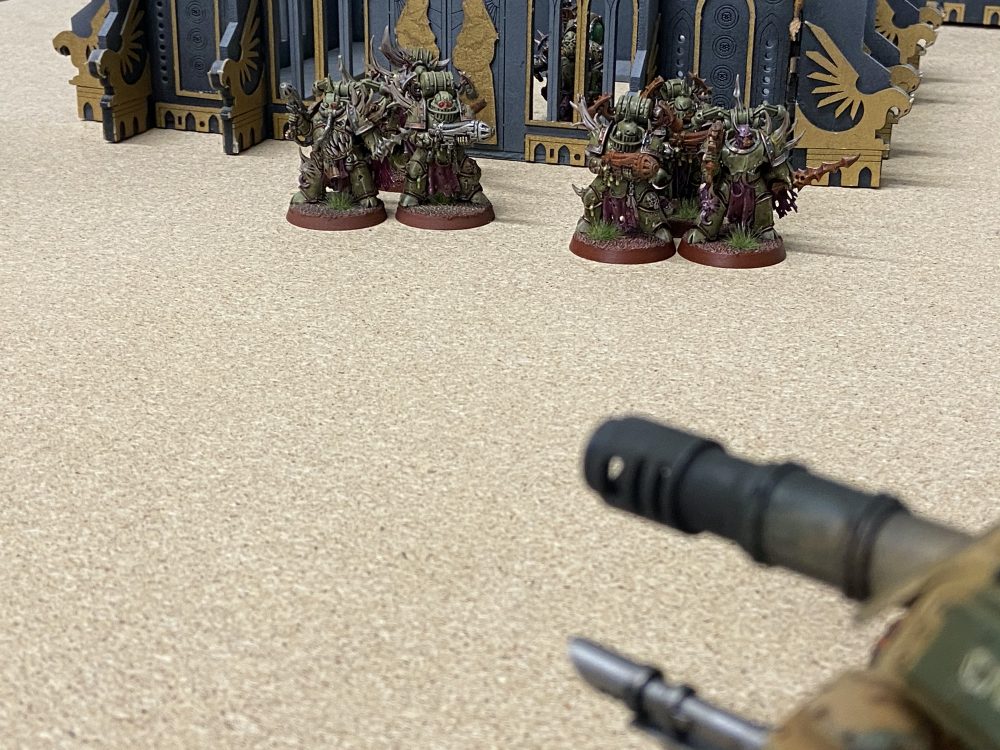 Well, that was a complete s**t show.

I felt defeated at the end of turn 1 after I lost most of my scoring ability and that feeling stayed throughout the game as I was ground down and destroyed.

As for lessons learned and things I could have done differently? I have no idea. I am all ears…

Not taking the first turn probably would not have changed anything because of the deployment map, it was opposite table quarters and 9″ from the centre of the battlefield. A different list I think is needed to counter the Death Guard as they are just too hard to kill and too good at shooting. They can be slow, but the slowness counts for nought on the new table sizes (30×44″) as you start so close together.

So yeah, disappointed with this one…

You can read Mark’s report on his Plague Gardening blog.