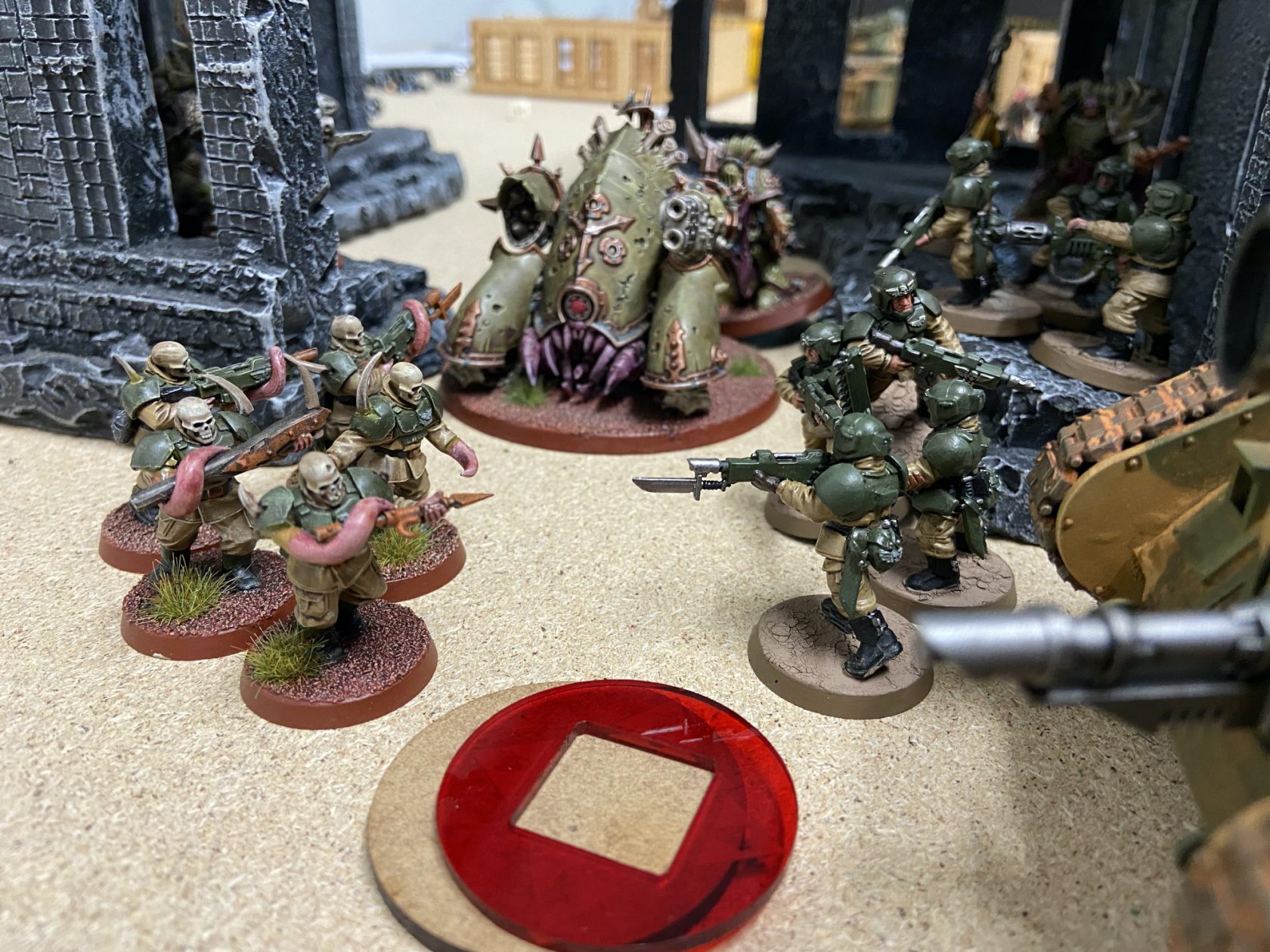 My first game of 9th Edition is here!

My first battle of 9th Edition game is over which was Incursion Astra Militarum vs Death Guard at 1,000 points. We rolled for a mission from the Grand Tournament 2020 and got Push Forward. This Mark’s second game of 9th Edition, his first was against Space Wolves.

We rolled Push Forward and set up the terrain to be pretty symmetrical with just Ruins. There are four objectives, two nearish me and two nearish the enemy. The mission came with a mission-specific Secondary Objective. If taken you scored points for completing an Action on each objective, but you got more the furthest objectives, e.g. the ones near the enemy’s deployment zone.

I took the Gunnery Experts and Jury-Rigged Repairs Doctrines.

During this first turn, I needed to get up the battlefield and onto the objectives in the middle. I also needed to get my Astropath into the centre to start his Psychic Ritual. Performing this power three times would give me 15VPs at the end of the game, so I needed to get up there. By placing my Chimera at the edge of my deployment zone I can disembark 3″ then move another 6″ – giving me a 9″ move into No Man’s Land. My Astropath was in place, he succeeded to manifest in the Psychic Phase. This means he could not do his Nightshroud power though.

My other movement was me trying to see things, the two Tank Commanders could just see the Plague Marines and the Blight Haulers. Two squads disembarked to flood the centre, while the third stayed inside its Chimera and made its way up my right flank.

I completed the Raise the Banners action on the back most objective and one of the centre objectives.  The red discs over the objectives signify the Raised Banners.

My Shooting Phase was poor and I removed just one Blight Hauler and a few Marines. I forgot Vengence for Cadia during the whole game but did use Hail of Fire for maximum shots. The killing was not important for me for scoring, First Strike is now gone from the main missions, killing was important though to stop myself being killed!

The Death Guard all moved up during their movement to start to counter my push to the centre. Their Shooting Phase was also poor and resulted in no real loses for myself. But, I lost a lot of Guardsmen on the objective I had made it to – and I wanted to keep it for the points in the next turn. So I spent 2CP (now a once per battle Stratagem) to auto-pass the Morale Check. This was after the Blight Haulers charged and chewed up some Guardsmen. 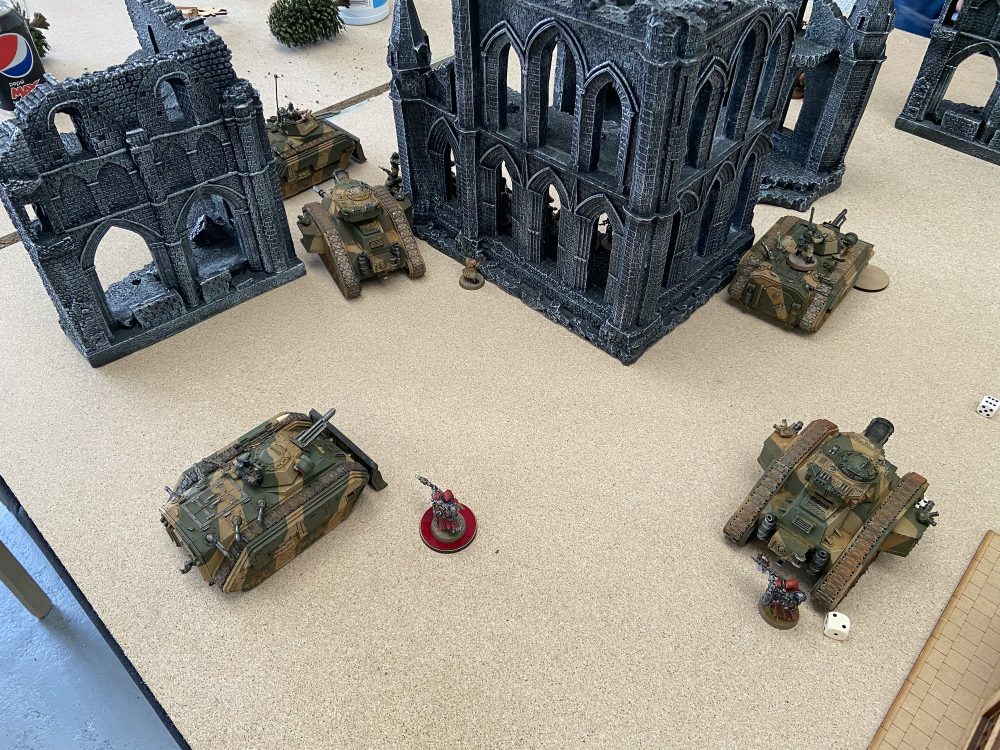 Guard forces after their first turn 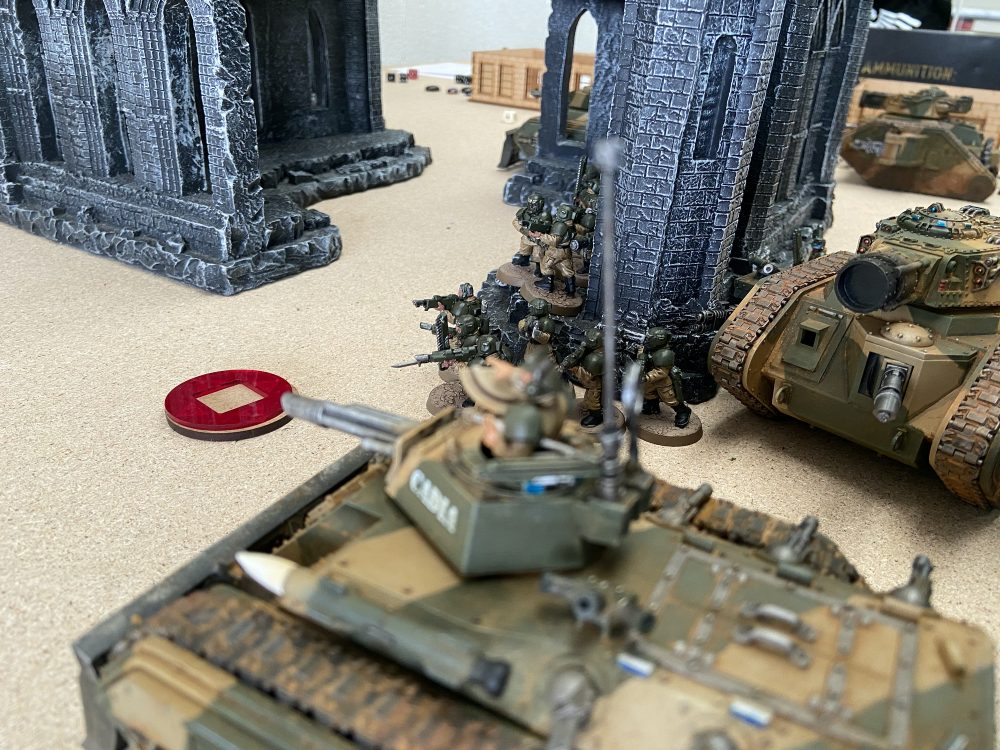 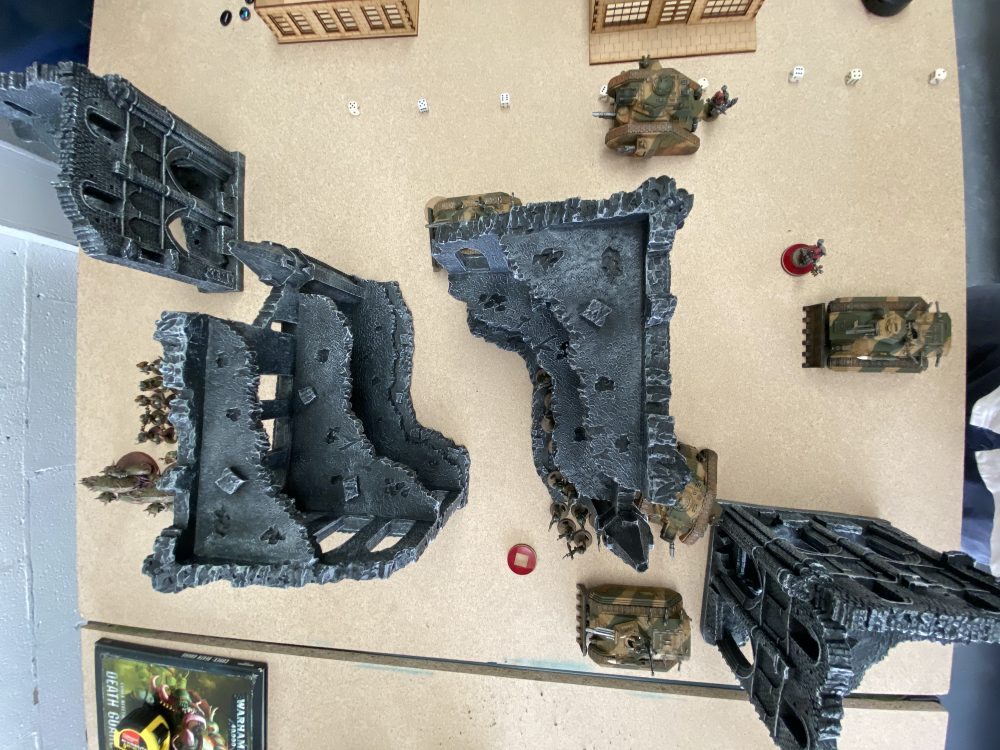 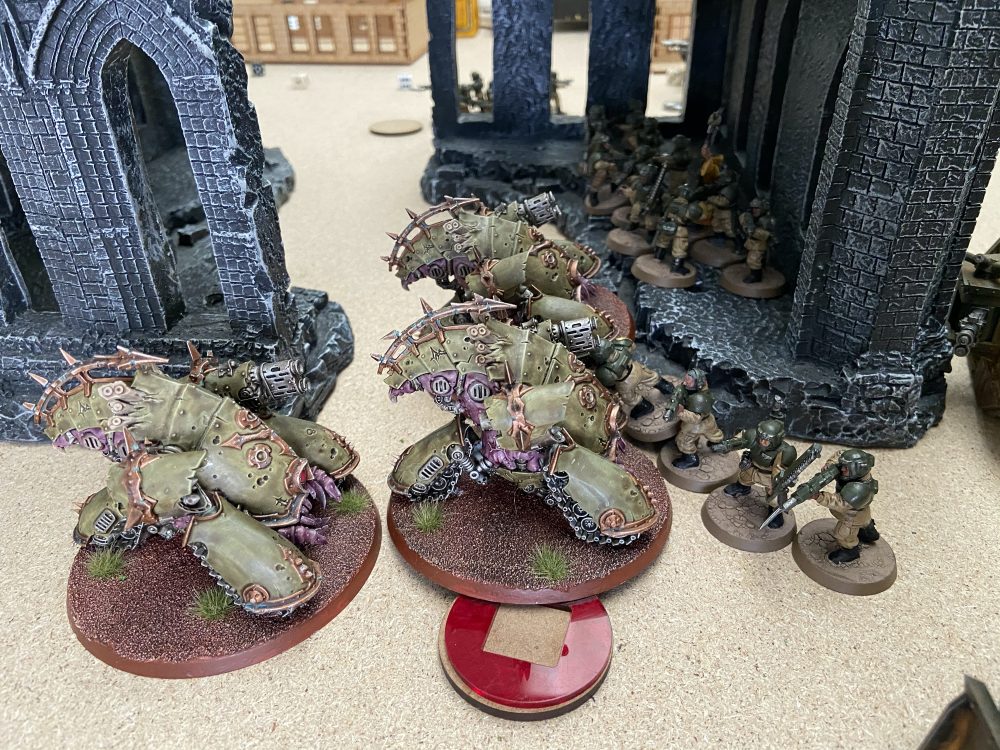 The Death Guard move up!

I have included the scores for each battle round like below, then the totals are at the end. Does this work for you, the reader? Is it too much?

The smaller board (30″x44″) makes for a lot of mayhem very quickly. The centre of the board was now being swamped by both forces.

I scored well this turn for the Primary as I had three objectives and more than my opponent.

My infantry Fell Back from the Blight Haulers to allow them to be shot, the third infantry squad disembarked and made it onto a third objective to Raise the Banners there. One Tank Commander was able to stay still and still see the Blight Haulers, the other inched forward to see some Plague Marines – but I miss calculated and they could only see the Pox Walkers.

Any vehicle that was damaged was now back to full health thanks to my Enginseers and Jury-Rigged Repairs.

I now had banners on three objectives. I charged the Blight Haulers with my Chimera to lock them in combat, although looking at the photos now, I could have wrapped them pretty easily with my Guardsmen and Chimera. That may have shut their shooting down for a turn. But, doing this may have exposed my important Astropath who was doing his Psychic Ritual again this turn – successfully.

My Shooting Phase was once again poor, I rolled three ones in a row for Demolisher damage against the Blight Haulers. That felt awful and game-changing, I should have killed one more at least. But I killed none, and there were still two left.

In the Death Guard’s turn, they continued their movement into the centre. The Blightlord Terminators arrived, Mark was considering placing them on top of the ruin in the centre, above my Psyker. They would have been more than 9″ away from my guys, they would need a 5″ charge to come down a floor and be within 5″ vertically of my guys to be in Engagement Range. But he decided to place them back in his Deployment Zone to head off a Tank Commander.

Mark’s scoring was a struggle at the start of his turn as I had captured half of the battlefield with Troops. I lost a Chimera this turn and my first squad of Guardsmen. The slow relentless roll of the Death Guard had begun. I have no photos, but by the end of turn 2 the Death Guard were into the ruin opposite me and were getting closer. 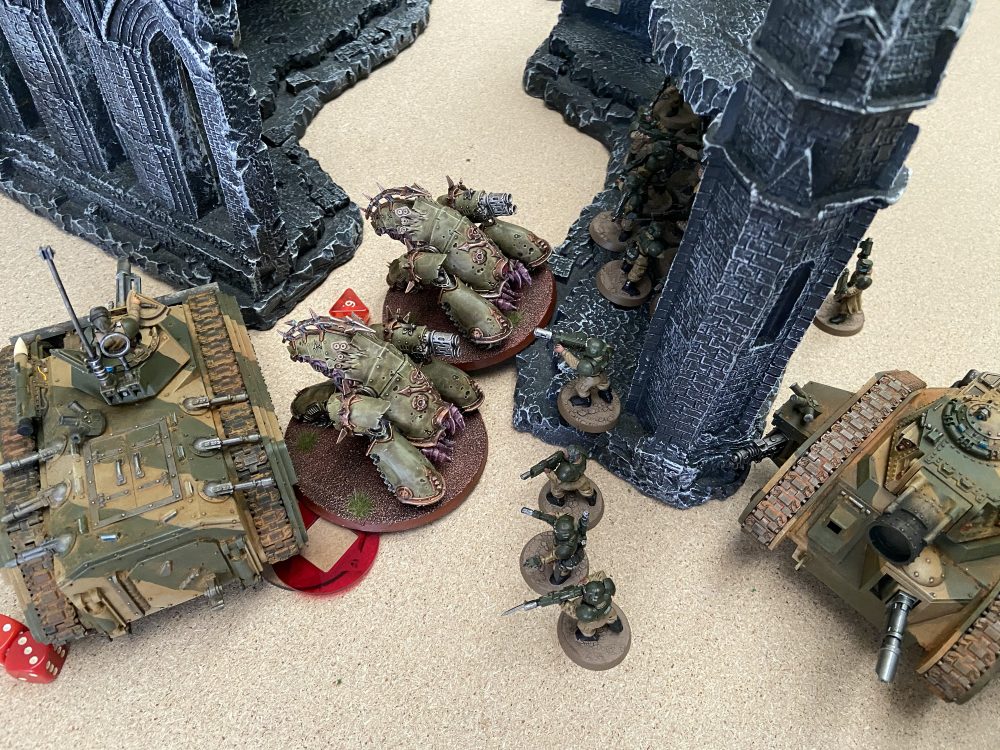 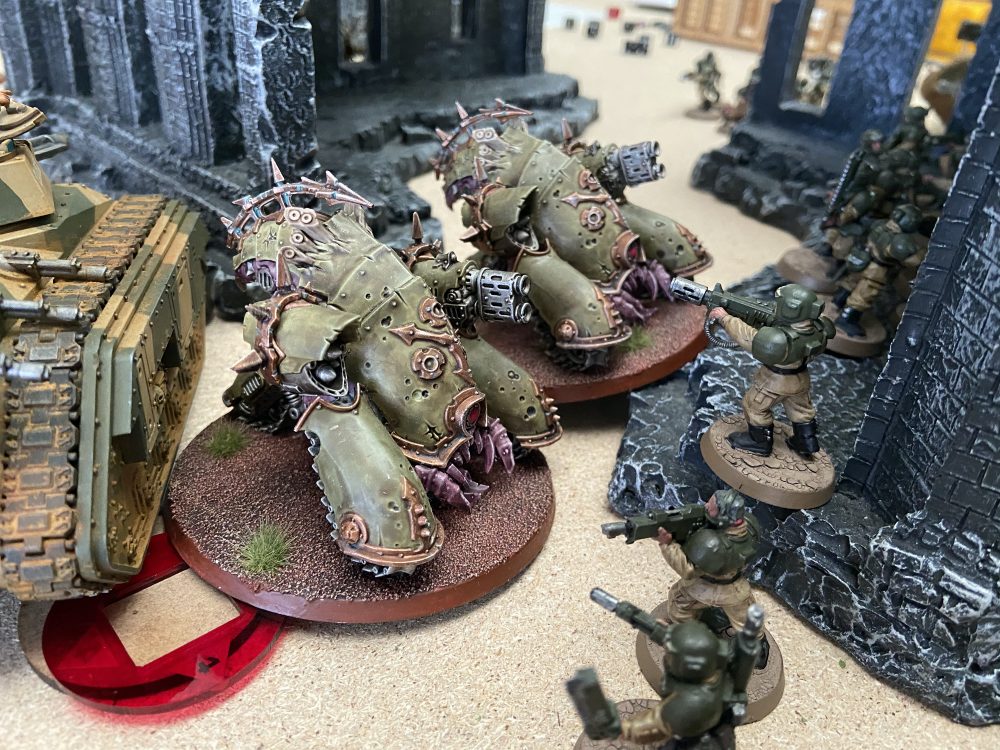 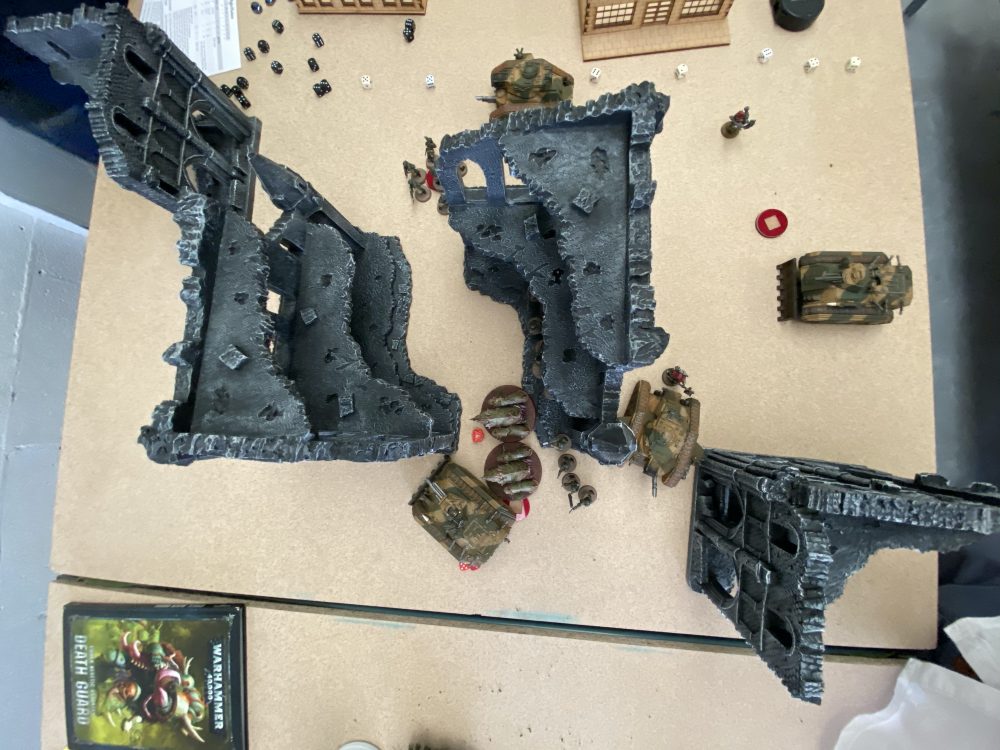 I scored well again as I had two objectives and more than my opponent.

I was starting to die though and lose my grip on the centre of the battlefield. My Astropath did get his final Psychic Ritual off though, that was worth 15VPs at the end of the battle.

I finally removed a second Blight Hauler, one remained and started to put a dent into the Plague Maines (I killed four) and Terminators (I killed three). But it was hard work, even with the Demolishers. I was also struggling for CP. With this Battalion in 8th Edition, I would have started with 8CP – but now in 9th I only started with 6CP. I get one CP per turn, I sometimes I got one from Kurov’s Aquila, but it’s not enough when I am using Hail of Fire.

The vice was really tightening now on my forces, I lost both Tank Commanders and another Chimera in this turn. The character that auto hits and does a flat 3 damage are so powerful for the Death Guard. Walk up. Point. Delete. I think it did 18 wounds to one of my Tank Commanders.

The rather awesome Cadian Pox walkers made it to the centre of the table this turn to contest, take it and remove my banner. The centre was now very empty of Guard units and I had lost a lot of my firepower. 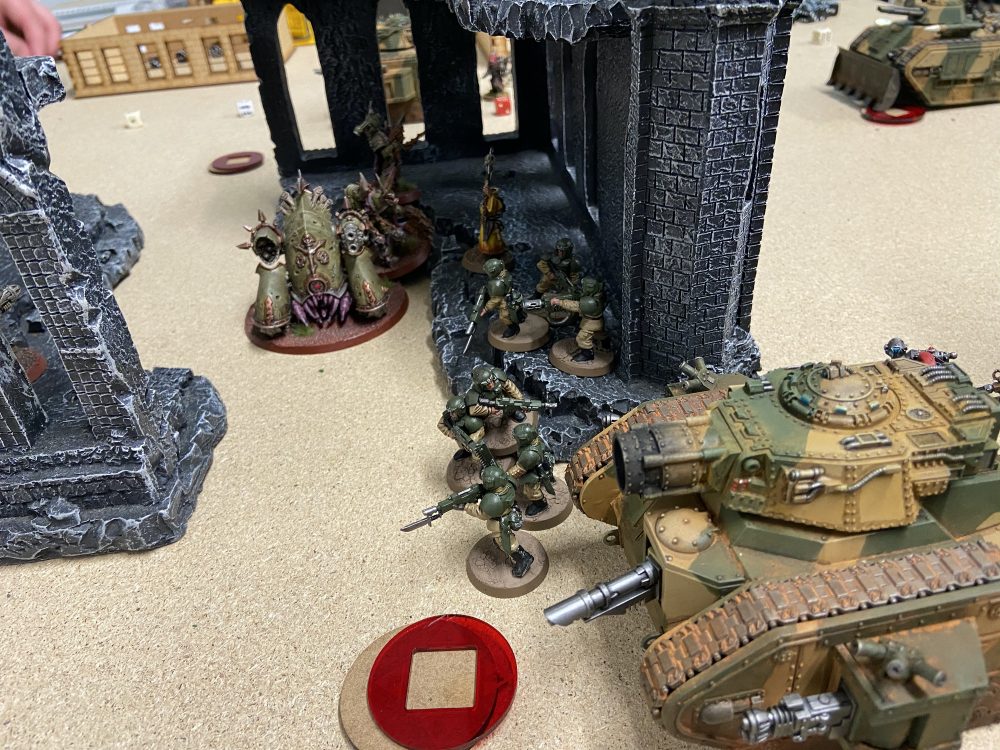 The centre during Guard turn 3 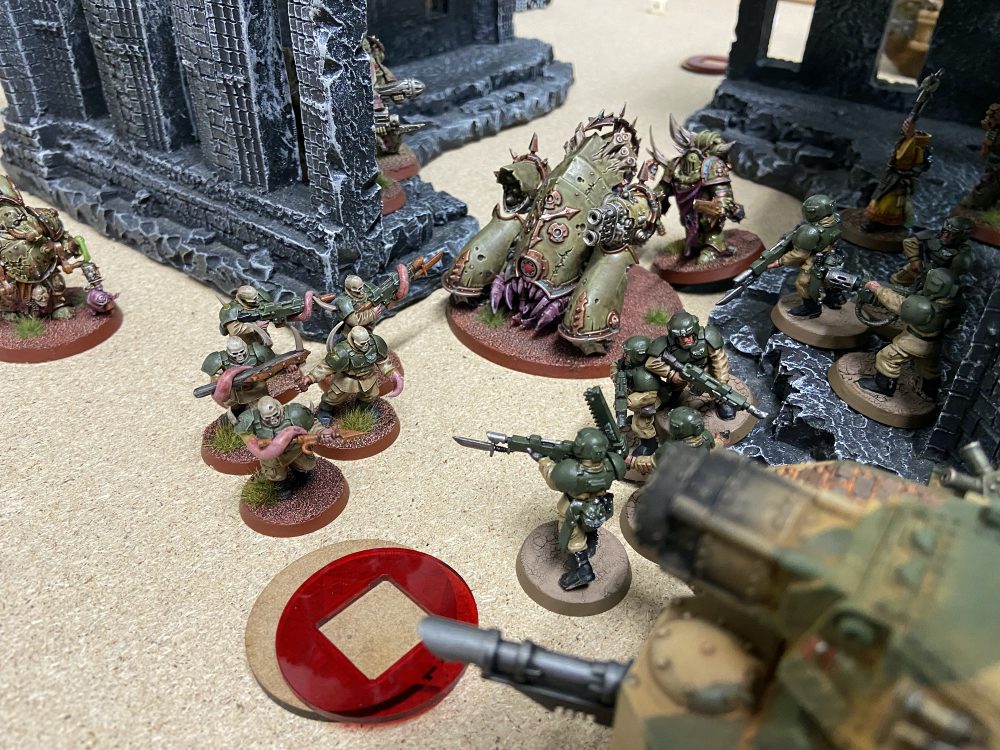 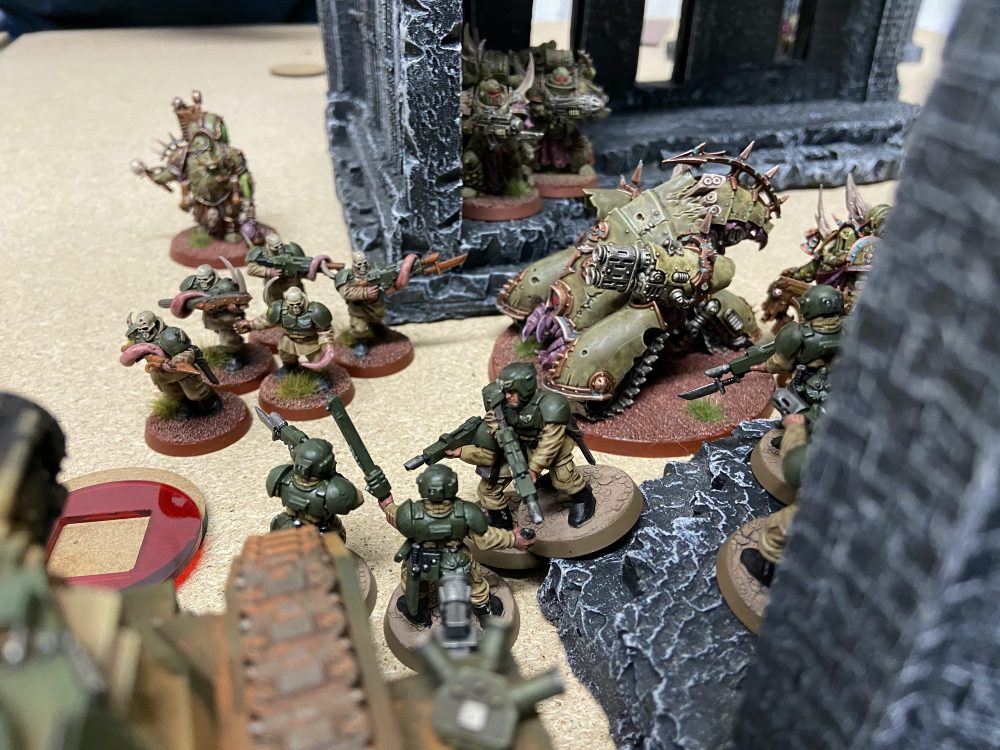 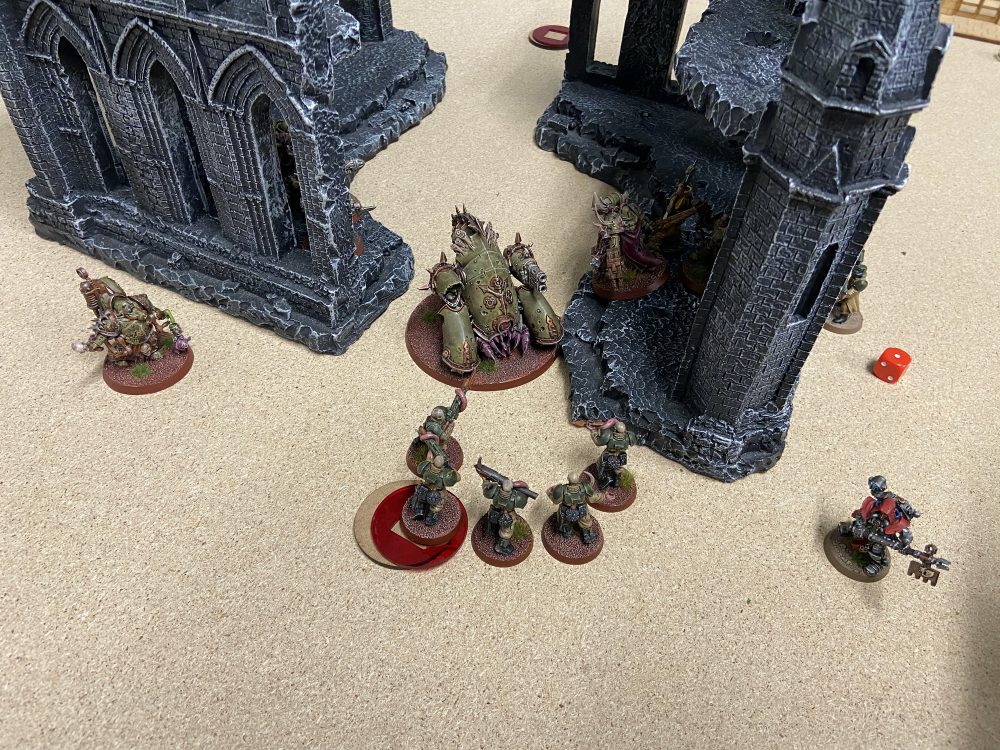 The centre of the battlefield after turn 3 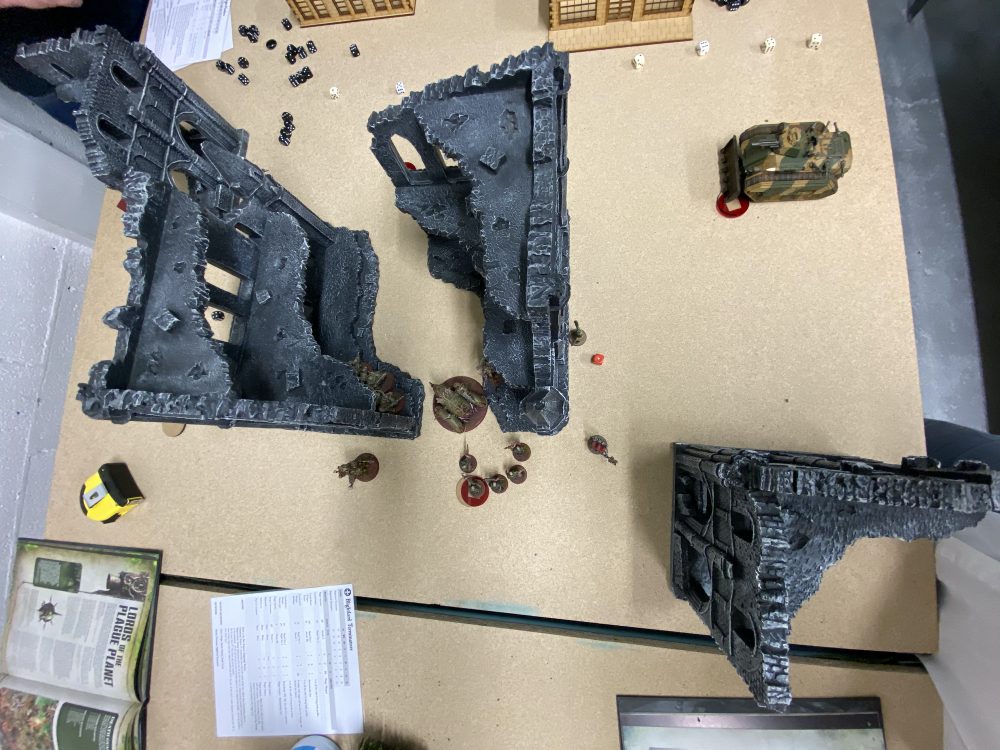 With my forces greatly diminished I only got 5VP from the Primary.

I pushed forward with my Tech-Priests while my Warlord and last Chimera moved back onto the objective in my deployment zone. I had a Tech-Priest on both objectives, but they were going to struggle to survive against the forces of the Death Guard.

A big moment came when Mark failed three charges to reach a central objective with a Tech-Priest on it. The other Tech-Priest was dead by this point from shooting, but not making the charge meant two things; 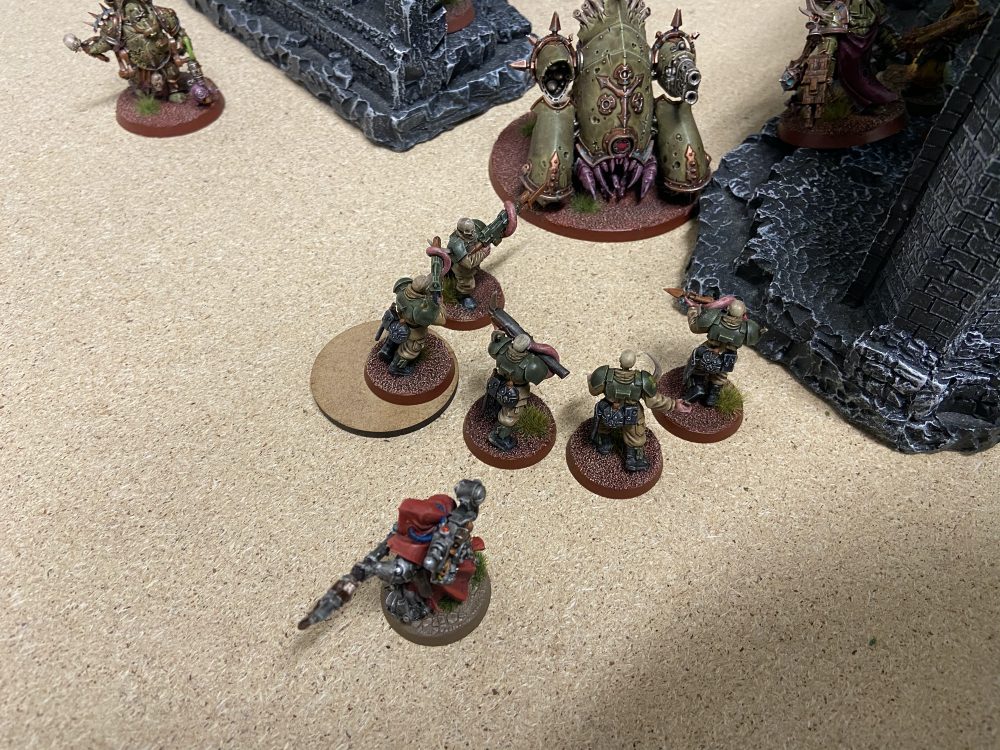 The centre is now very empty of Guard in turn 4 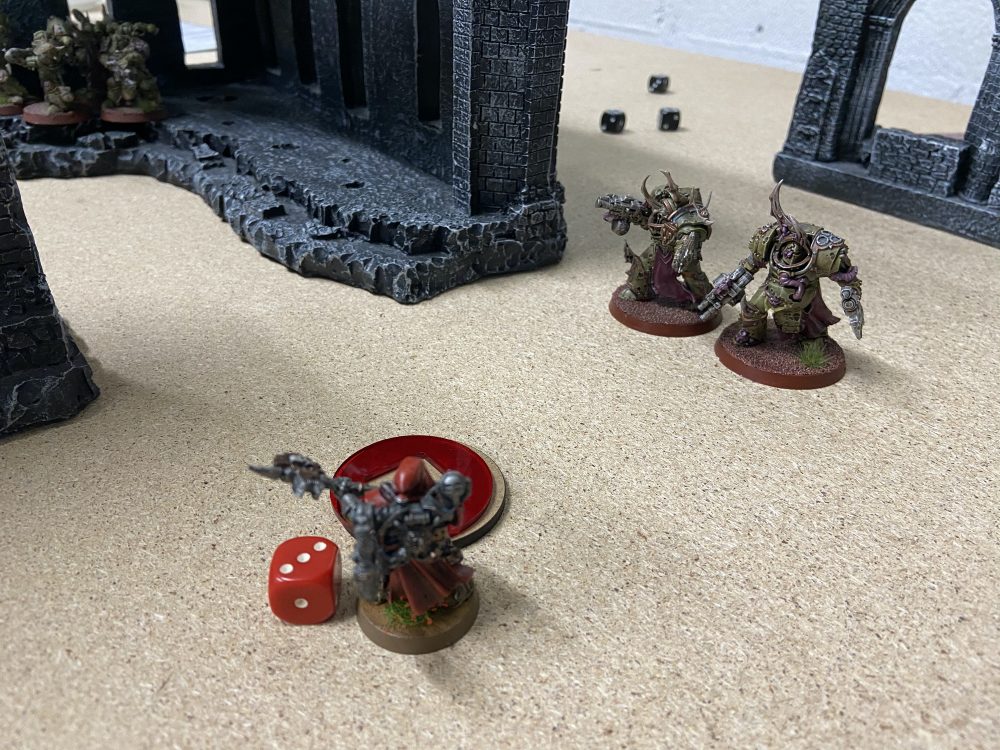 A lone Tech-Priests hangs on to a Raise Banner

I had very little to do now. I had three models left! But I scored well on the Primary again thanks to that one Tech-Priest being alive! I got 15 VP because I still held more and still held two objectives. The Death Guard made it to my Deployment Zone to max out on the mission-specific Secondary, but was it enough? And had they killed enough units to make up for the big lead I had gained on the Primary? 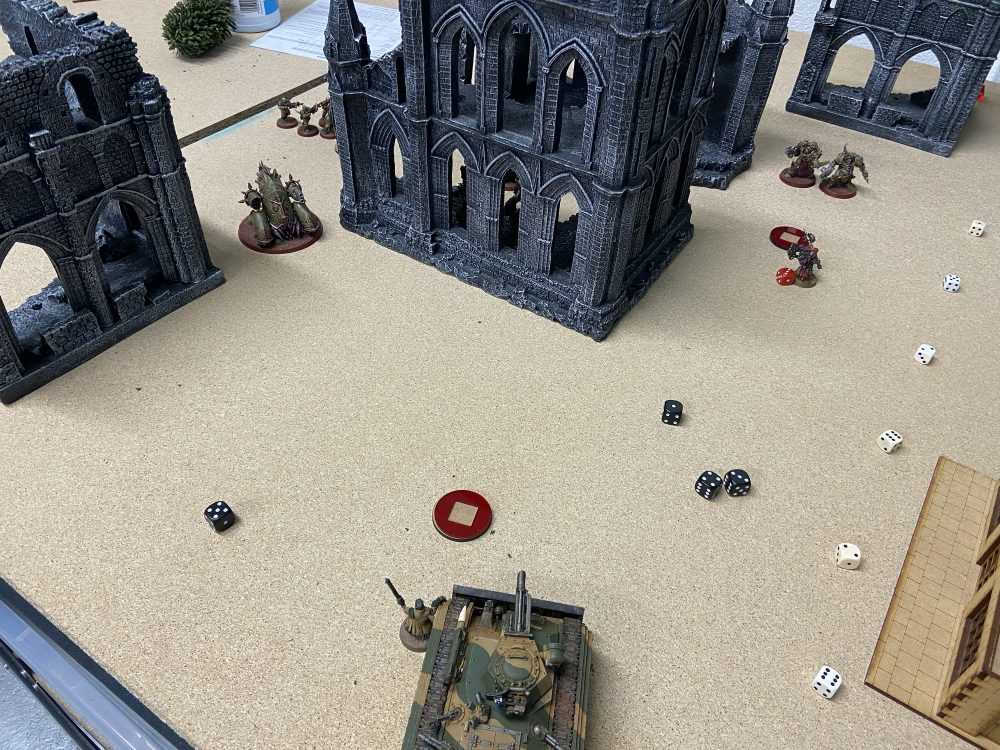 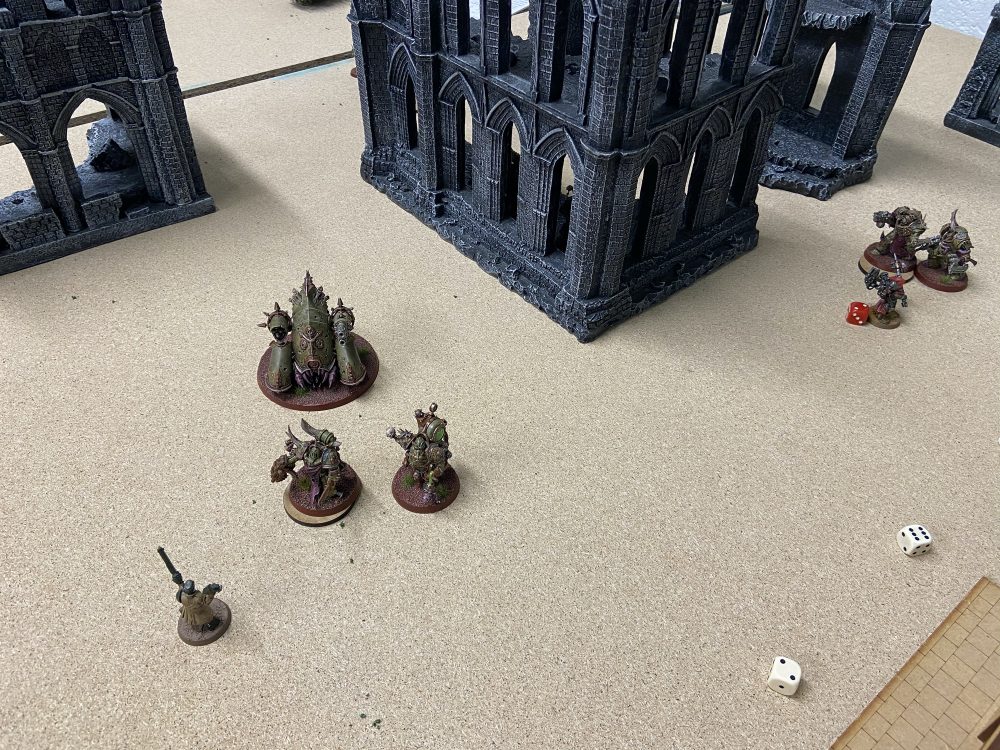 Turn 5 after (most of the) Death Guard shooting – Game end

The final scores are below, but my first Incursion Astra Militarum mission was a victory, with 83 VP for me and 60 for Mark.

The Chimeras were the winners for me as they enabled me to gain that extra movement and protection – even though only one squad remained inside past the deployment phase. Had I gone second, then their protection would have been more important.

Lots to think about after this first game of 9th Edition. We made a few mistakes, like forgetting that the Push forward mission-specific Secondary was an action. I do not think it would have made a big difference.

It was interesting to see the Tank Commanders with Demolishers do so poorly. Between them, they could not kill three 8 Wound Death Guard models. Bad rolling was partly to blame, but also the line-of-sight blocking terrain means that things are a lot harder for shooty armies.

Playing the objective, movement and Troops are my key takeaways from my first game of 9th Edition. Making an Incursion Astra Militarum list is hard, the lower points means that you cannot do everything well, you can maybe do one thing well. Making my next list will be fun having learnt a lot from this first game.

You can also read Mark’s article on this game.