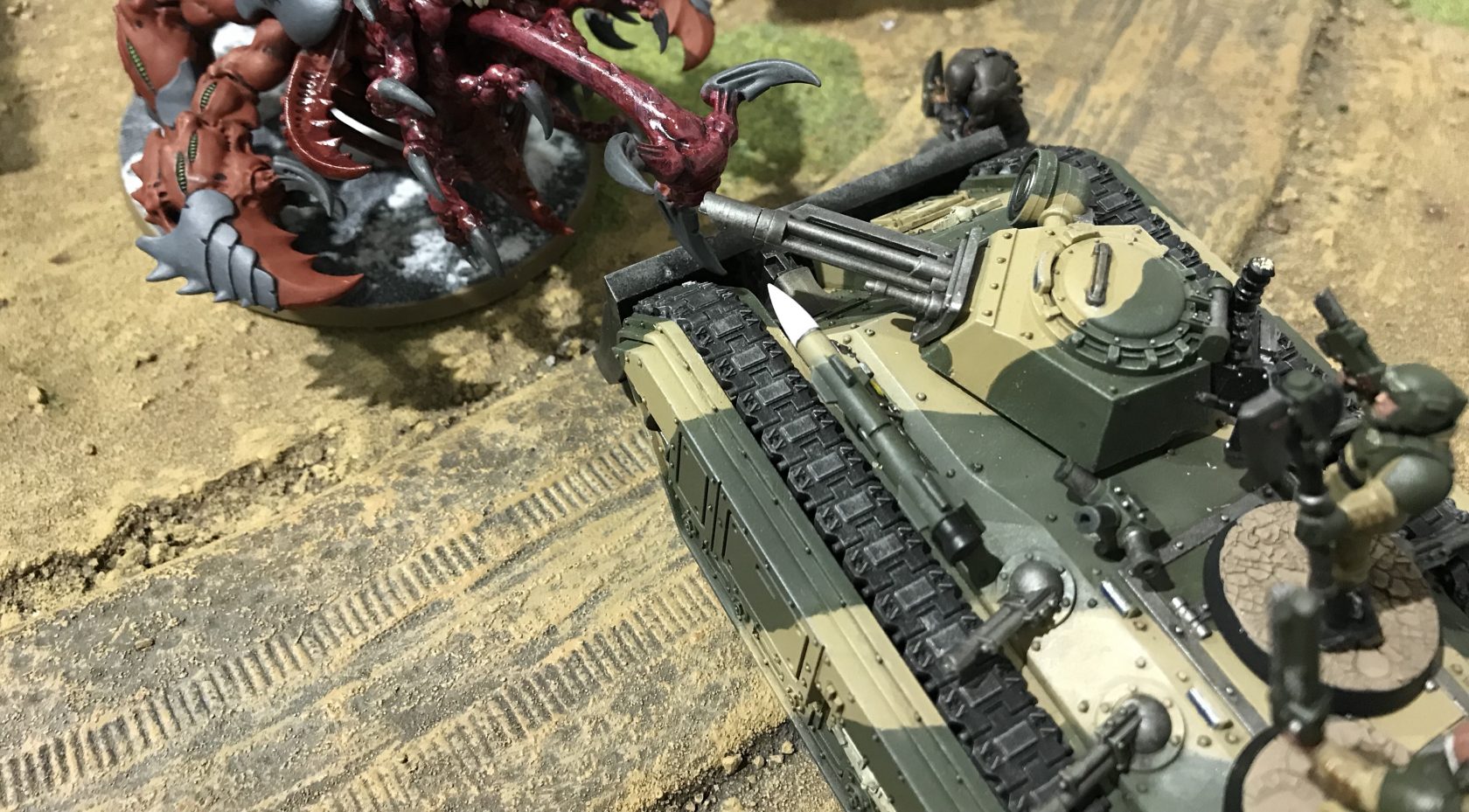 This is a great list from Chris for our GSC & Tyranids vs Astra Militarum game. I did not know he was bringing Tyranids, but that made the game much better! It was a curveball for me after I created an anti Toughness 3 list! I now had to deal with T3, T4 and T8 enemies!

We played the new Resupply Drop Eternal War Mission from Chapter Approved. This is a normal mission, to begin with in terms of deployment and placing six objective markers.

But at the start of the third turn, the player whose turn it is, so it’ll be whoever went first, selects three objective markers. These are the Alpha Objectives. The remaining three are the Beta Objectives. The player then numbers the Alphas, 1, 2 and 3 and rolls a D3. The corresponding objective of the roll is kept and the other two Alphas are removed.

The other player does the same at the start of their turn for the Beta Objectives. This then leaves just two Objectives remaining worth three VP each.

Plus Slay the Warlord, Linebreaker and First Blood.

So you do not know until turn three which Objectives will be worth the VPs. 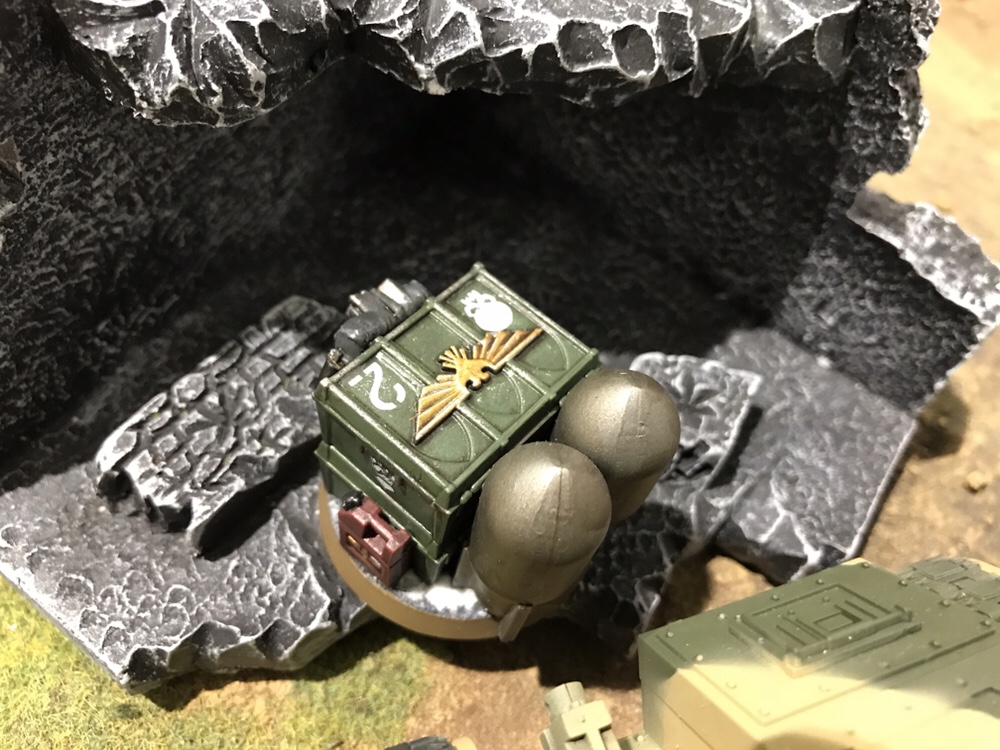 The Genestealer Cult side finished deploying first and went first. I did not seize. Anything that the Genestealer Cult could put into Reserve went in Reserve! This left a lot of big monsters facing my Guard lines along with a Goliath and a Leman Russ set way back.

That made for a petty epic scene, my Astra Militarum tank line facing several Tyranid creatures across a picturesque river with two bridges. 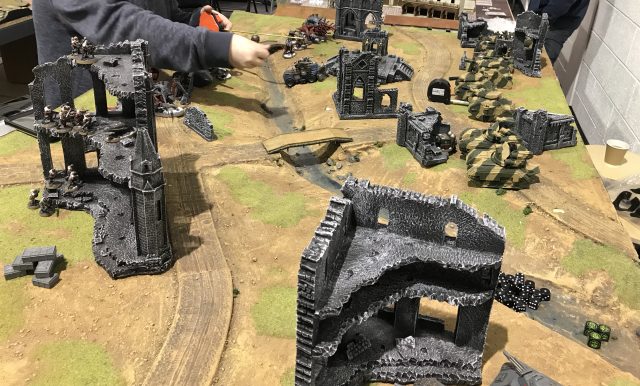 My three Leman Russ including Pask set up in the centre with the Chimeras and Veterans close by. Along with all my Characters. I was packed in tight in the top right corner in the above photo. Bottom right out of the image, are my two Basilisks. I actually forgot my Basilisks! But Chris lent me two Chimeras to use instead. So if you see two grey GSC looking Chimeras in the images – they are really Cadian Basilisks. The Wyverns set up on top of an objective. 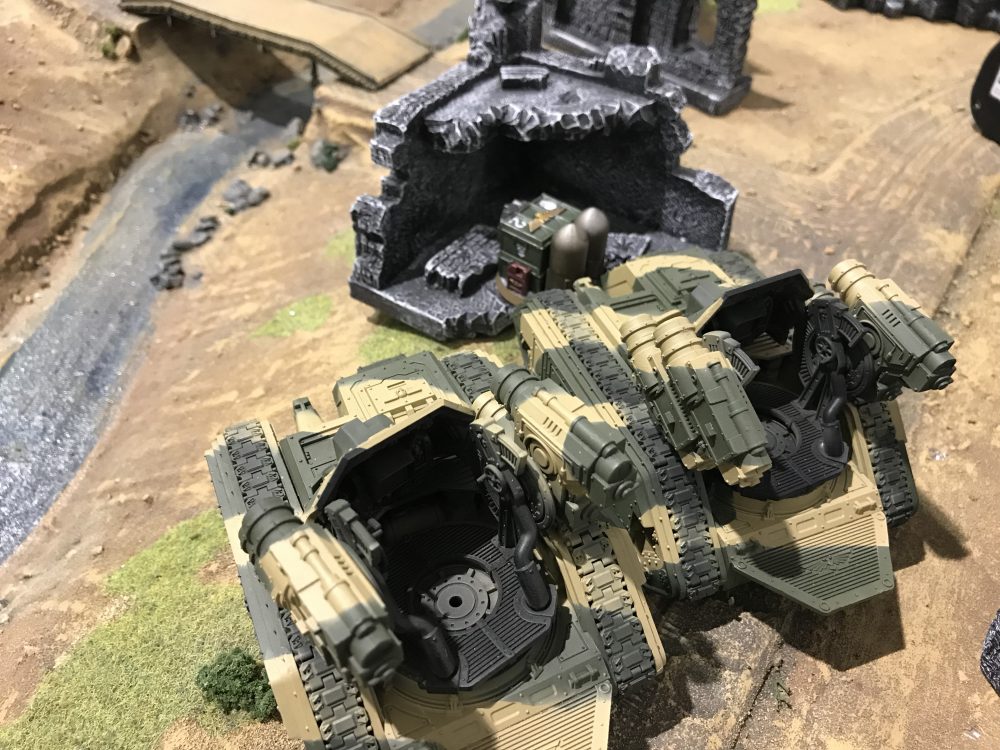 I’m giving no prizes for how the first turn went for the enemy forces. Move forward as much as possible and then bring in all the reserves as close as possible. The From The Shadows rolls that Chris made was unlucky, no sixes! Thank the Emperor!I lost my Veterans so some charging Genestealers that arrived 9″ away. 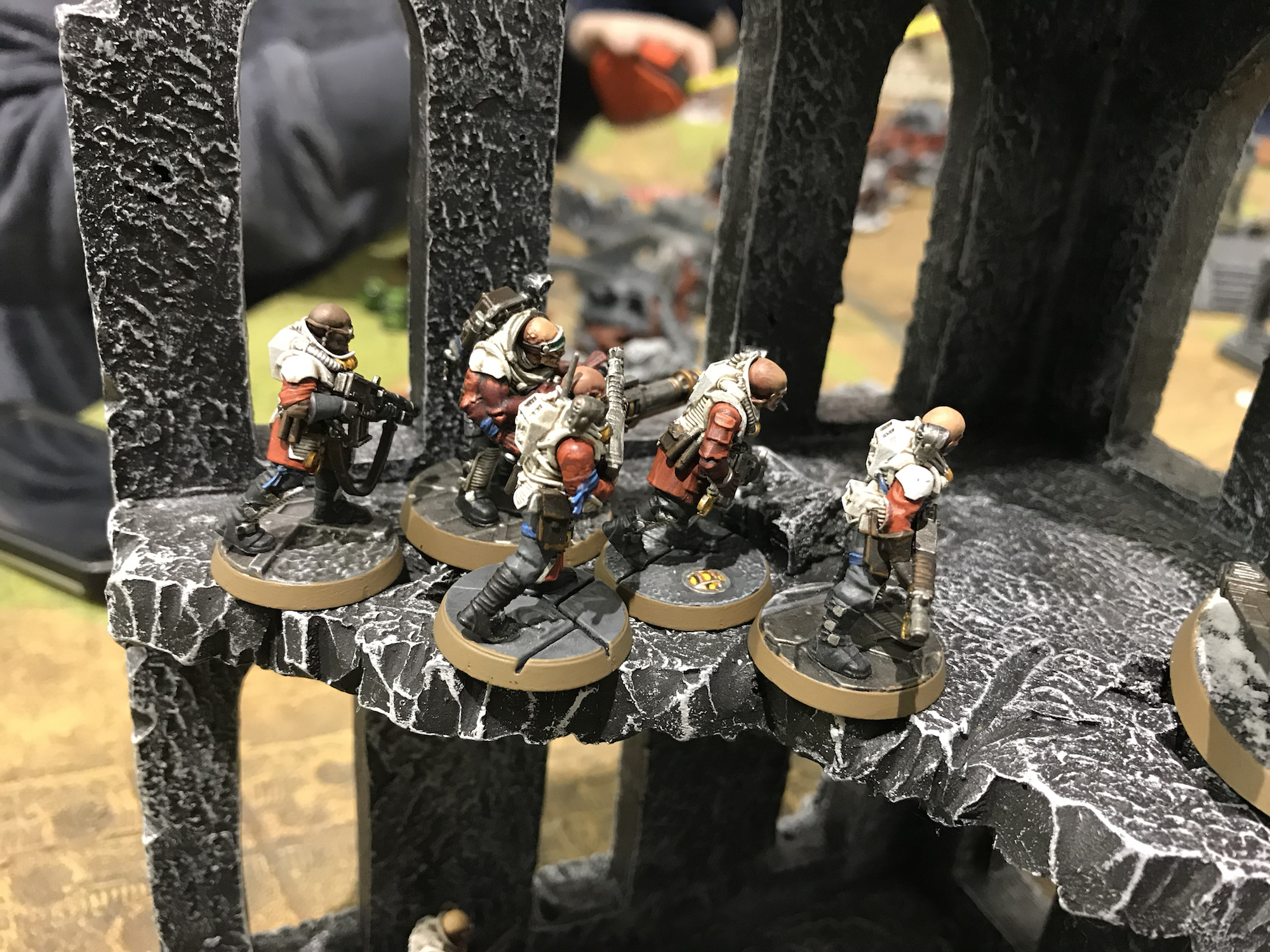 That put some Genestealers and the Patriarch very close to me from the first turn. The other charges failed and I picked off a model or two in overwatch. The Guard first turn went as expected too. Shoot and shoot some more. The prime target was the Hive Tyrant that was running right at my tank lines. It took wounds but it remained. 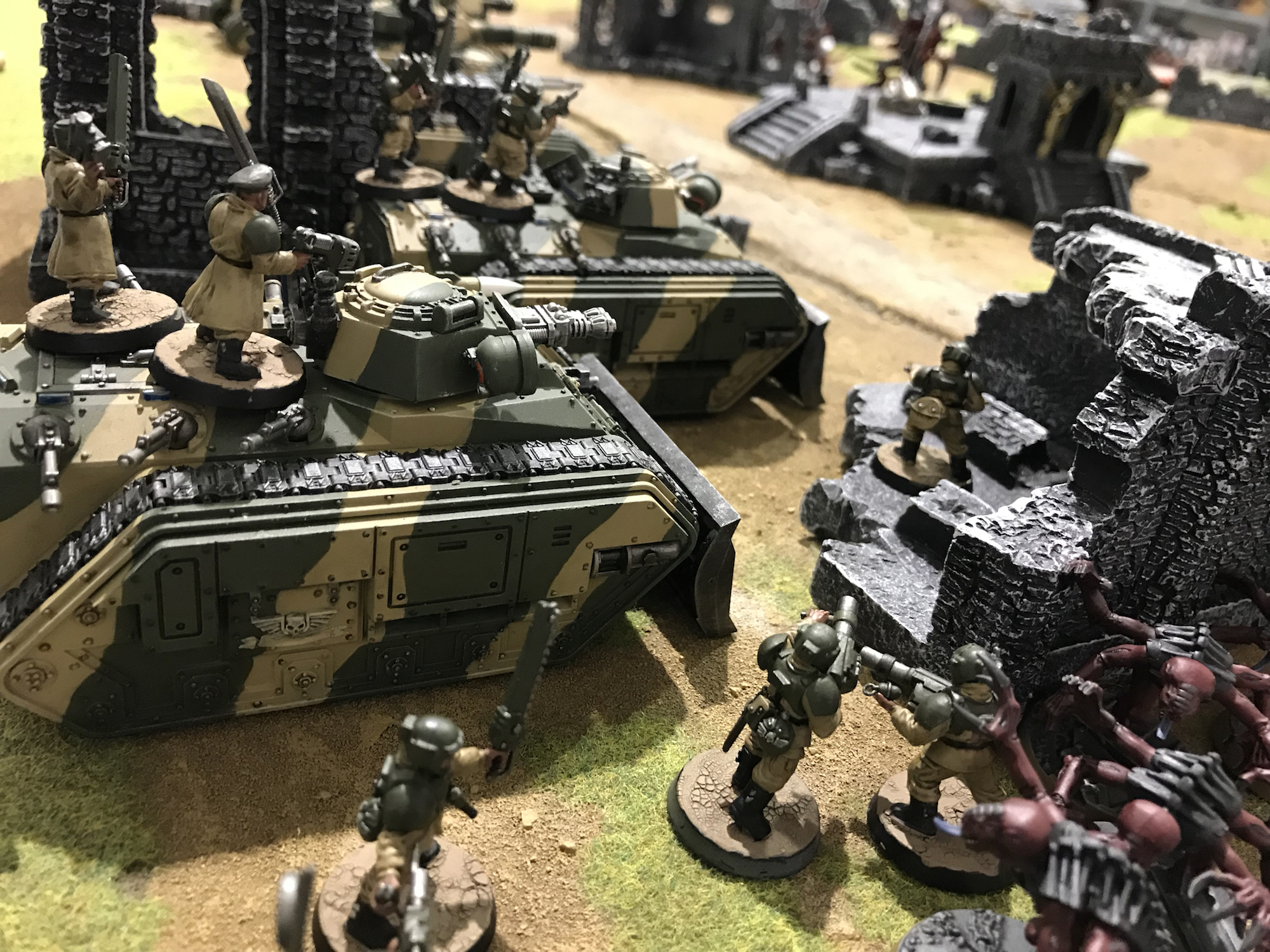 A messy corner! Hive Tyrant can be seen off in the distance in the centre, top

I was in trouble on that far right corner but managed to clear out the Genestealers by turn 2. But not before they consolidated into a Chimera and just were a general annoyance. The Patriarch also arrived into that corner too which just added to my problems. See photo below. The camera is basically above the corner of the table. The Patriarch is just off the photo, to the right and my board edge is off to the left.

I managed to move a Chimera out and into the path of the Tyrant, another Chimera went pop and the other was stuck – pictured above before it was surrounded by Genestealers.

Pask ploughed wounds into the Hive Tyrant on the first turn and finished off the Warriors in the second turn. He is amazing at just chewing our wounds.

After Chris got his objective in his own half all became clear. The Tyranid and Genestealer Cult Forces needed to hunker down and survive. With First Blood in the bag along with Linebreaker and Slay the Warlord being close. All he needed to do was keep hold of one objective and survive. 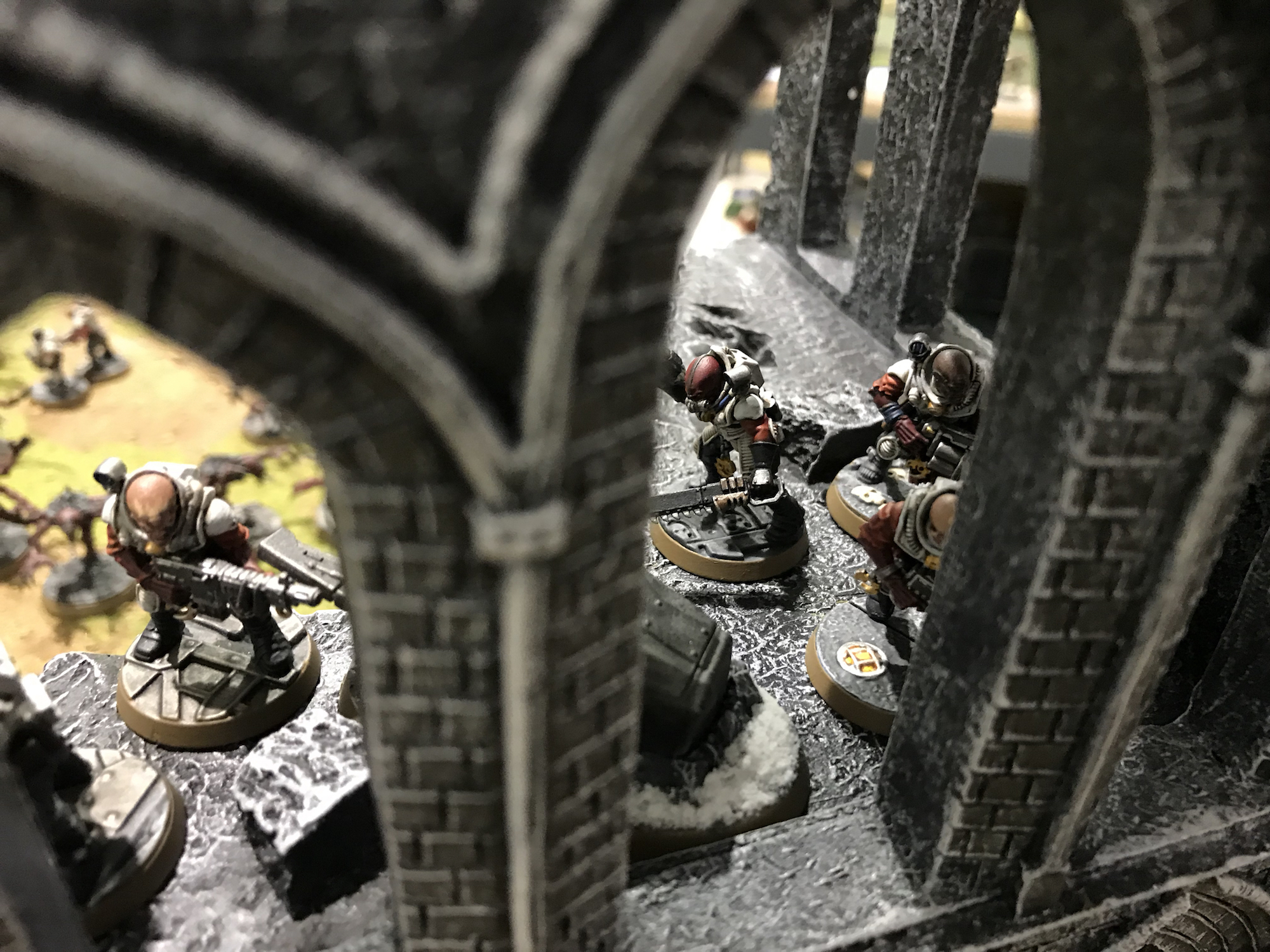 As expected the Tyranids tighten the screw on my Chimeras and Infantry reducing them even further in numbers. My right flank was being devoured by the Patriarch, some big tongue monster (Haruspex) and Aberrants. The centre was being assaulted by the GSC Infantry, a Hive Tyrant and two Screaming Carnifexes. The Basilisks were relatively untouched over on my far left flank. They had now nearly dealt with the Magos and Infantry that arrived to destroy them.

The enemy’s turn three basically saw them just try and kill me as well as try and lock all my vehicles up in combat and also stop them from falling back by pinning them against my board edge and buildings. Smart! My objective was so far away it seemed impossible for me to start contesting for points. 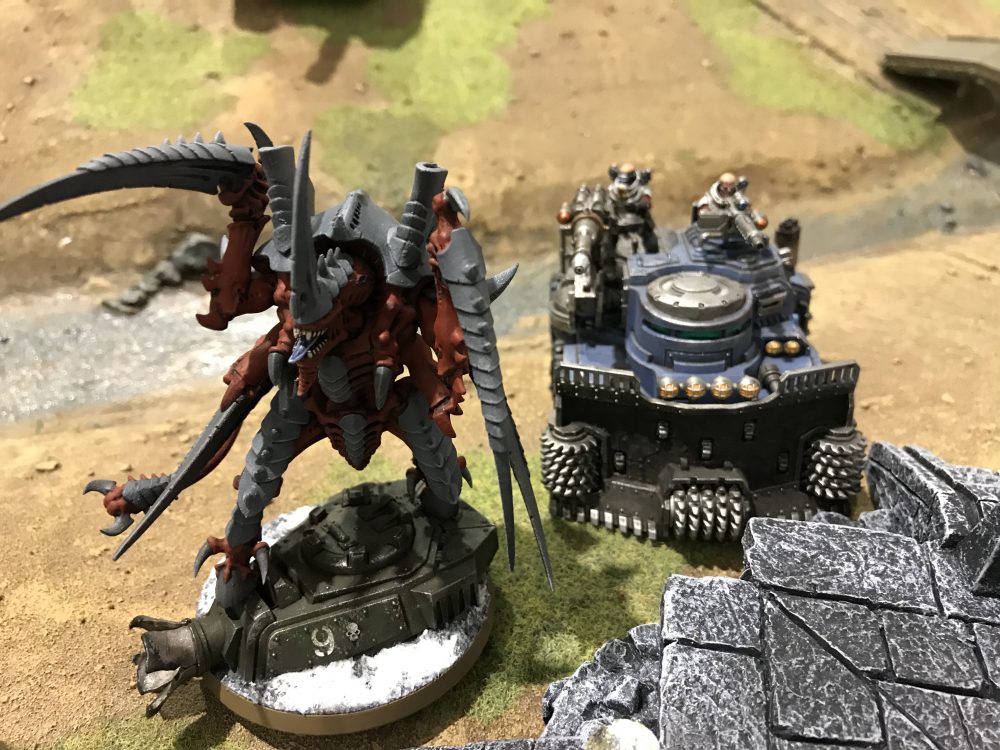 Pask and his Leman Russ buddies were constantly being hounded by assaults from the Goliath Rockgrinder. One was destroyed by it and the others only managed to survive because it only hits on a 5+. When the GSC Codex comes out I am sure there will be some sort of buff for that thing in the form of a Stratagem. Emperor help us when that happens!

A single, lonely, Chimera sped out across the table to claim the objective. The Chimera was empty, but it had full wounds and was able to Advance. It was only the third turn. Which gave the Chimera another two turns at least to get into position. All was set.

But then the enemy set upon that Chimera like it was the last Imperium unit left in the universe. A double shot from the GSC Leman Russ, a Mining Laser and other various shots of biological matter finished it off. I needed a new plan for getting the objective.

Now onto turn 4. The tongue monster and Patriarch managed to kill the last of my Guardsmen in turn four which left them free to then regret back towards their Deployment Zone to stop me from claiming the objective. I’d killed the Aberrants!

I’m still many inches from the objective I should be going for after the lone Chimera went pop. All seems lost. Until Pask ordered Full Throttle on himself and the last remaining Leman Russ Battle Tank. Both were on full wounds. This gave both tanks a move of 20″ + 2D6″. I arrived at my objective in turn four!

This lead to a loss of shooting from both of my remaining Leman Russ. I had two Basilisks left too which now pounded the Infantry holding the GSC Objective. It was a poor use of the artillery that causes D3 Damage – but needs must. They killed a handful of models but several still remained.

The photo below shows a large grass area in the foreground where all my stuff was. You can see the two Leman Russ off in the distance – racing to get to the object on the bridge which is hidden by the leading Leman Russ. 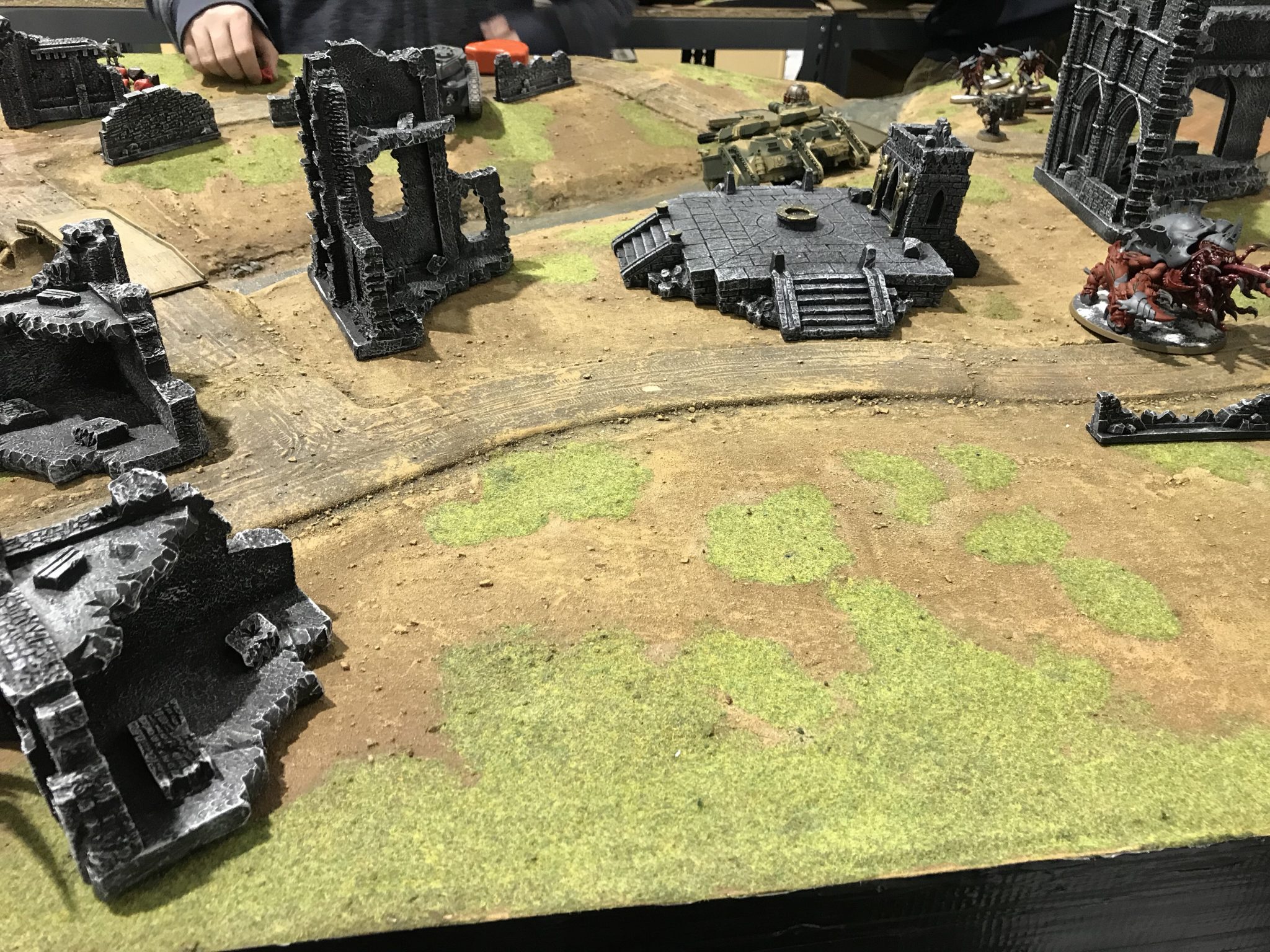 The Patriarch finally caught up with Vindicare and ate him. He did well, turn one he followed one to hit followed by another one after a CP re-roll. But he gradually peeled wounds from the Hive Tyrant. I’m never really sure if he’s worth it though. One shot failing on a one is just too risky?

This would be our last turn as the club was closing up. The tongue monster tried to retreat back in to engage Pask and his buddy. The last remaining Carnifex with four wounds made for my Basilisks. And the GSC Leman Russ also attacked my Leman Russ. The Patriarch was too far away to now affect the game.

The Carnifex right failed its charge against my Basilisks or it was killed in overwatch. I forget. But either way, my Basilisks survived.

It all came down to:

Can two Basilisks kill 7 Toughness 3 models that are in cover?

No, they could not.

And that was game and a win for the xenos. If those models had been killed the enemy would not have had their three VP Objective and I’d have won by one VP! 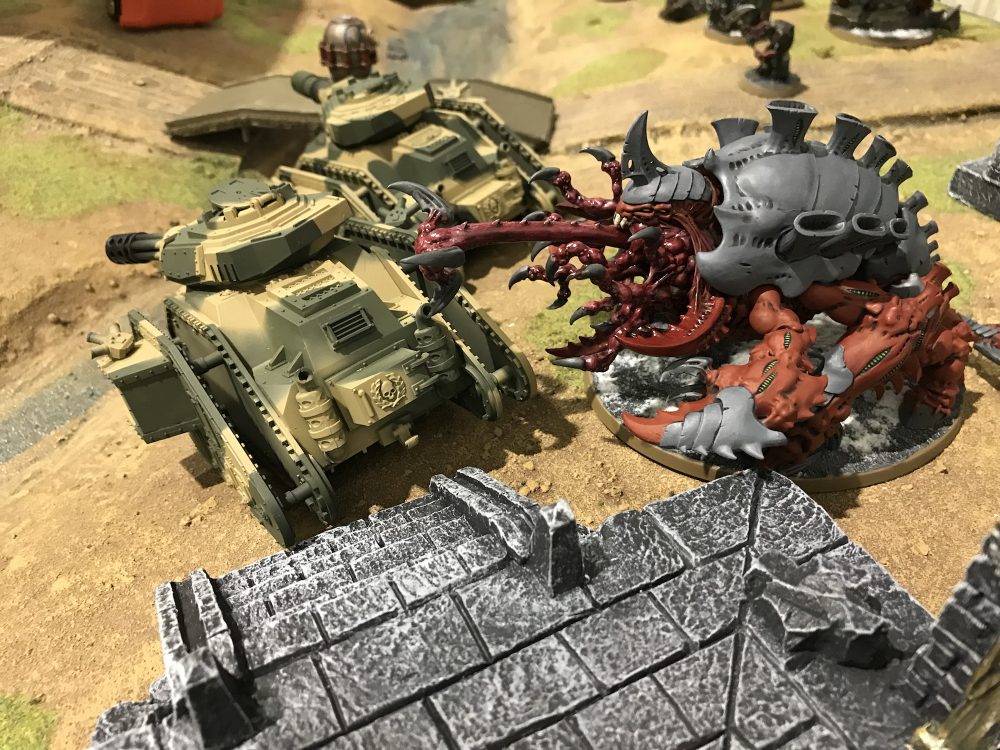 The final scores for GSC & Tyranids vs Astra Militarum:

Imperium; 3VP from an objective and 1VP Linebreaker.

Despite the Basilisks not killing the models I needed them to at the end of the game they were very effective. Being able to shoot anything on the table with them is very useful. Especially when you need Objectives to be cleared. Or you need to place wounds on a monster on the other side of the table because everything else failed to find it off.

I forget what Chris’ MVP was but for me, it was the Patriarch. It just moved from unit to unit and killed stuff. Being a character also made it hard for me to target and kill unless I really thought about where I was placing my models. Something I need to improve on. It ate up Guardsmen aplenty, a Chimera and the Vindicare.

A really great game despite the loss. It was so close and had we played another turn or two I might have sneaked a victory.

Overall I was really happy with the list. The big creatures I was not prepared for but I managed to take them on and kill a few.

A rematch is needed …

All images from the GSC & Tyranids vs Astra Militarum battle are below.