A review and interview about the GameFor Mobile App - find local tabletop players.

I’ve something a little different for you today. A little interview about the GameFor app and GameFor Review. Not heard of it? Well, stay tuned to learn all about it. GameFor connects you to local tabletop players and events. It is free, so go check it out now! www.iamgamefor.com

Firstly we have some questions answered by Adam (a.k.a Uncle Atom) about the GameFor app. Then I will go through the app and how I found it to use. Its only two months old though, so the user base is still growing and features are still being added. But from what is available right now it’s a very solid and promising start.

Interview and Details about GameFor

Now over to Adam…

Adam, tell us a bit about yourself?

I’m a wargaming YouTuber and my channel is Tabletop Minions. I started in March of 2013 and my main mission with the channel is getting new players into the hobby of wargaming and showing people who are interested in the hobby that it’s not as hard as they think, and they can build and paint models and have a great time doing it. I’ve been playing wargames since Battletech in the sixth grade; now I’m in my mid-40s.

Editor’s note: Adam’s channel is really great. Please do check it out. A very positive point, for me, regarding his channel is that it is very none visual. And therefore can be listened to with headphones on, while walking – no need to watch.

What is your involvement in GameFor? From inception through to its current stage of release/development?

The app wasn’t my idea, it was initially dreamt up by the partners at Milk Can (the company I work for – my day job) and I was hired sometime later because of my knowledge of the industry, my marketing and promotional background, my YouTube background, and because I’ve been a professional visual designer for more than two decades.

We’re a small company of half a dozen people that make mobile apps and web solutions for clients, but we’re all gamers, too. My main job was initially to help conceptualize the app and how it would work, and then work on the user interface and user experience. Now that we’ve launched it, my role is more about marketing and spreading the word, as well as helping to steer our content creation and long-term vision.

Why was GameFor born? It’s a great idea by the way.

Thanks, we appreciate it. We think that it’ll be a good thing for tabletop gamers, events, and stores worldwide.

The app was built because it can be difficult to find people to play tabletop games with. Finding multiplayer matches in video games is usually pretty easy: you press the ‘multiplayer’ button in a menu and you’re linked with other players nearly instantly.

Finding people who enjoy the same types of tabletop games in your area is harder, but they’re usually actually out there. The problem is there’s no centralized way to find local stores, local gaming events, and players local to you who want to play the games you also enjoy.

What’s on the current roadmap?

We just launched the app a few days before Christmas 2017, so as of me writing this, it hasn’t been out for a full two months yet. Our biggest roadmap is building the user base, and we’ve just started marketing the app after our soft launch to make sure we’d properly gotten everything running.

Next, we’re adding support for Groups & Clubs by mid-March 2018, so that’ll be big. It’ll allow gaming groups to not only communicate with their members about events and more, but it’ll also allow them to gain more members (if they’re interested in that) to help grow their ranks.

After that, we’ve got plans for friends lists, enhanced store functionality, user badges, and many other things.

Will in-app purchases be added?

The app will always be free for gamers, stores, and eventually groups (when that feature is launched) to use.

We will be adding subscriptions for all three of those types eventually, as well. The subscriptions will help support the app and keep the servers paid for, but will also give added benefits to users, stores, and groups that the free tiers won’t have access to. We’ll also be adding some advertising into the app soon, but much of that will be disabled for users who are subscribers, for example.

What can I and others do to ensure a greater take up of the GameFor app?

Let your other gamer friends know about it, the Looking For Players feature is really helpful to gamers looking to find people to play with. Let the blogs, podcasts, and YouTube channels you enjoy know about it, and let them know I’ll gladly do interviews with them.

Tell your local stores about it; if they’re not already in our Store Finder database (5800+ stores worldwide and counting) then we can put them in for free, and if a store wants to become a Verified Store and be able to edit their store profile, enter their store hours and description, and post their store events in the Game

Events listing, they can also do that for free. They can contact us at stores@iamgamefor.com and we’ll set them up with all of that for free, and we promise we won’t use an algorithm to pick and choose who sees their events like Facebook does.

Where can I find it?

We’ve designed it for both Android and iOS, so it’s available in both app stores. There are millions of apps in both of those ecosystems, so we’re still climbing the search results. If you do a search in your app store of choice for ‘gamefor tabletop’ then we usually pop up right away. Otherwise, head over to www.iamgamefor.com and there are direct links to each version over there.

And now onto the review. A big thank you to Adam for providing all the detail about GameFor.

Installation was easy, right from the iOS App Store. I am sure the Android version is much the same. It weighs in at only 28MB, which is nice these days.

Registration was simple too, you need an email which you have to confirm, a username and a password. Simple.

Once you are registered and logged in you are good to go!

The Looking for Players screen is where I think I have spent most of my time. There are not many near me at the moment, maybe 10, but its probably doubled since I installed the app a week or so ago. The below image shows this screen, note the excessive white space is because I have removed personal details from these player profiles.

Most useful is the distance is shown between yourself and the player. You can use messaging inside the GameFor app too, so no need to give out our mobile number or any other personal details if you just want to chat and organise a game with a new player.

Note at the bottom the distance search and the genre selection, its set to WAR in this screen shot. More on the genres later. 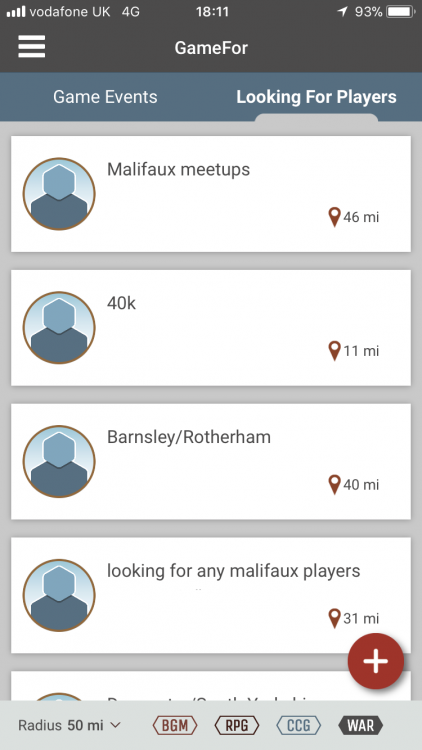 The Looking for Players Request is simple and provides just the right amount of detail to other players so they can make a decision on whether or not to get in touch or not about a game.

The form below is pretty self-explanatory. A nice touch is the meeting place. No need to try and communicate the location of a store or club, all the details are right there in the app. 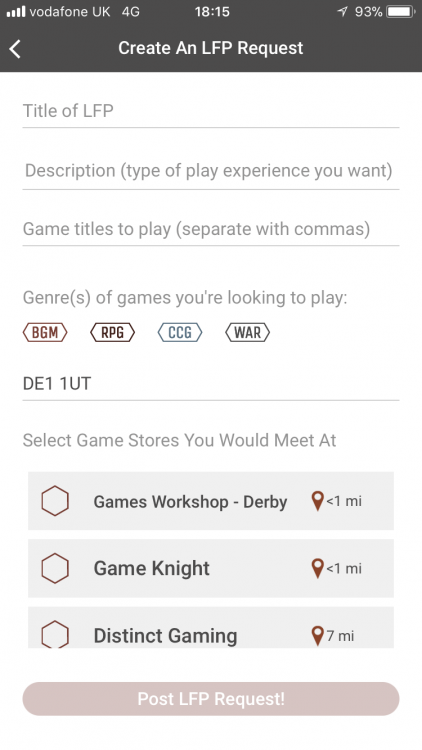 The Store Finder lists Stores, and Clubs it seems. My local list of Stores and Clubs was good and when I noticed a club missing, Boards and Swords, I simply emailed GameFor on stores@iamgamefor.com and it was handed no problem within 24 hours. Its now set as my favourite after a fantastic Genestealer Cult and Tyranids Vs Astra Militarum battle there a few weeks ago. 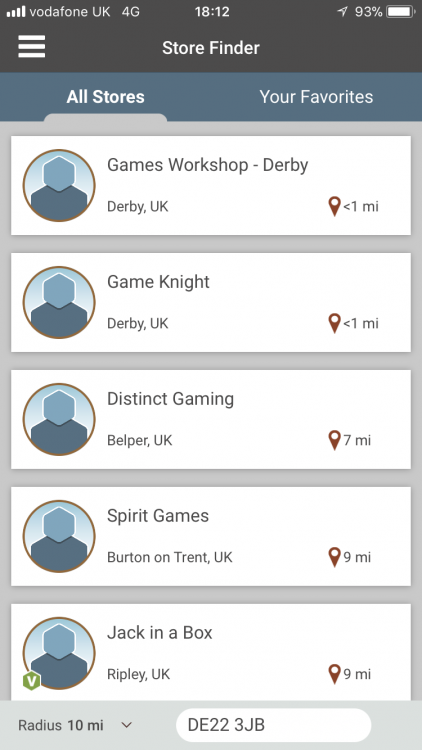 I have removed a couple of items from this image too, to keep it mostly anonymous. For example, this page has my address on, for working out distances. It’s not accessible to other users.

From your profile you can set the types of games you want to play, what forces you own, set an avatar and enter your name. The genre breakdown is nice in GameFor. Its useful without being too granular. There are four:

I’ve only selected WAR. When you use the Looking for Players feature you can select one or more genres so you only see those players interested in those genres.

That image is me, outside Games Workshop, at 1 AM after a visit to the pub! 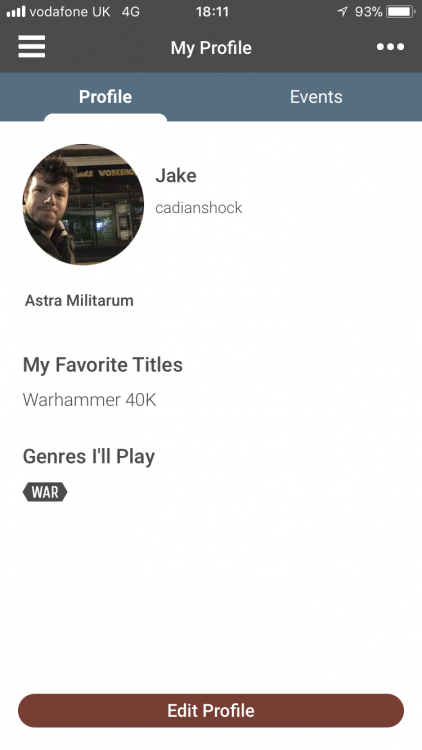 The other areas of the app that do not relate to its core functionality are very handy. What might seem like a small thing, is in fact very handy. For example, the FAQ page is extensive and informative and there is a Support page with email addresses on so you can get in touch with real people. 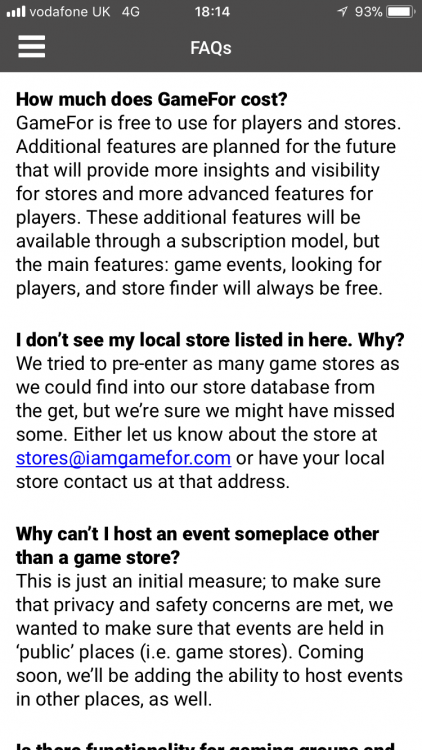 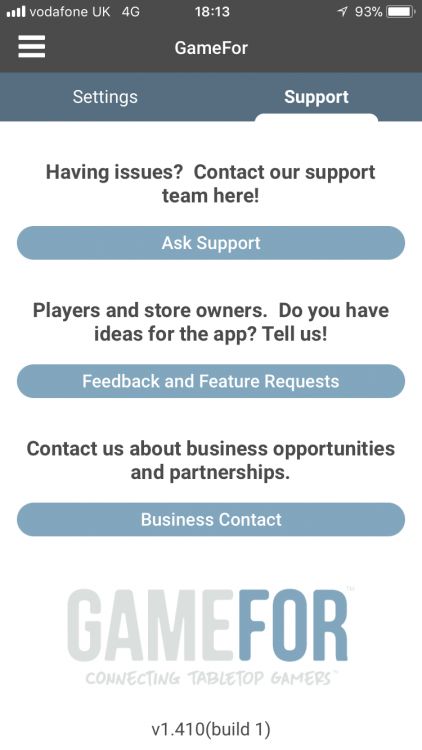 This is a great app, I would highly recommend it. It is robust, well put together and its clearly been thought about by gamers for gamers. As the user base grows its usefulness will explode. Make sure you get on it and get your friends on there and your hobby group.

You can look me up on GameFor, my username is cadianshock.

And that is all for now folks!