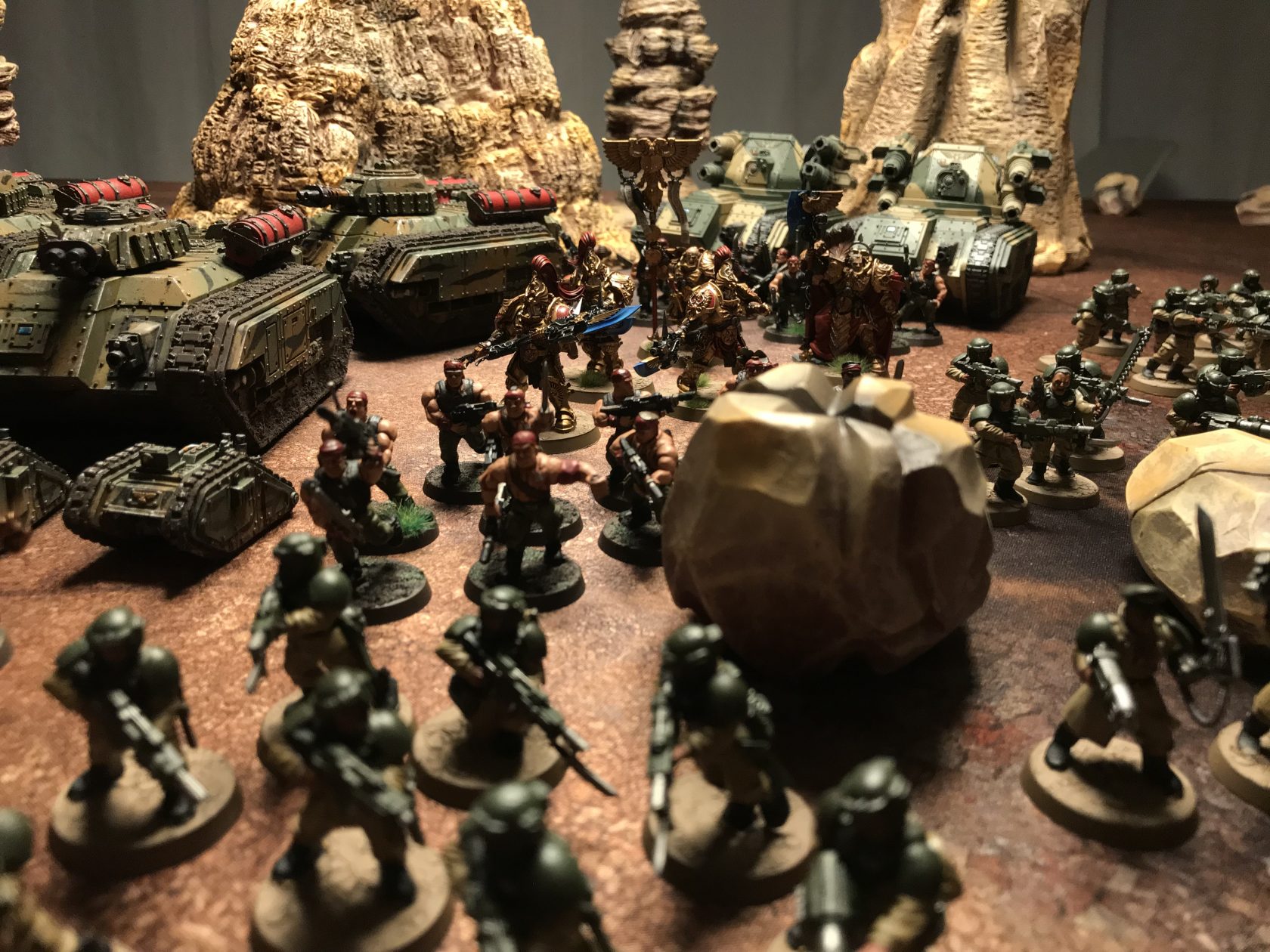 Let us kill some Dark Angels!

It’s been a while, but I have now managed to get a game in against the Dark Angels. Those of you that have been paying attention may have noticed I didn’t attend the tournament I had planned to go in early March. My partner’s Grandad passed away around then and this meant I’ve had to postpone my attendance.

Hopefully, I’ll attend another event at some point this year.

So the three C’s. Cadians, Catachans and Custodians. Call it Soup if you must – it’s just a fun a diverse list to me. 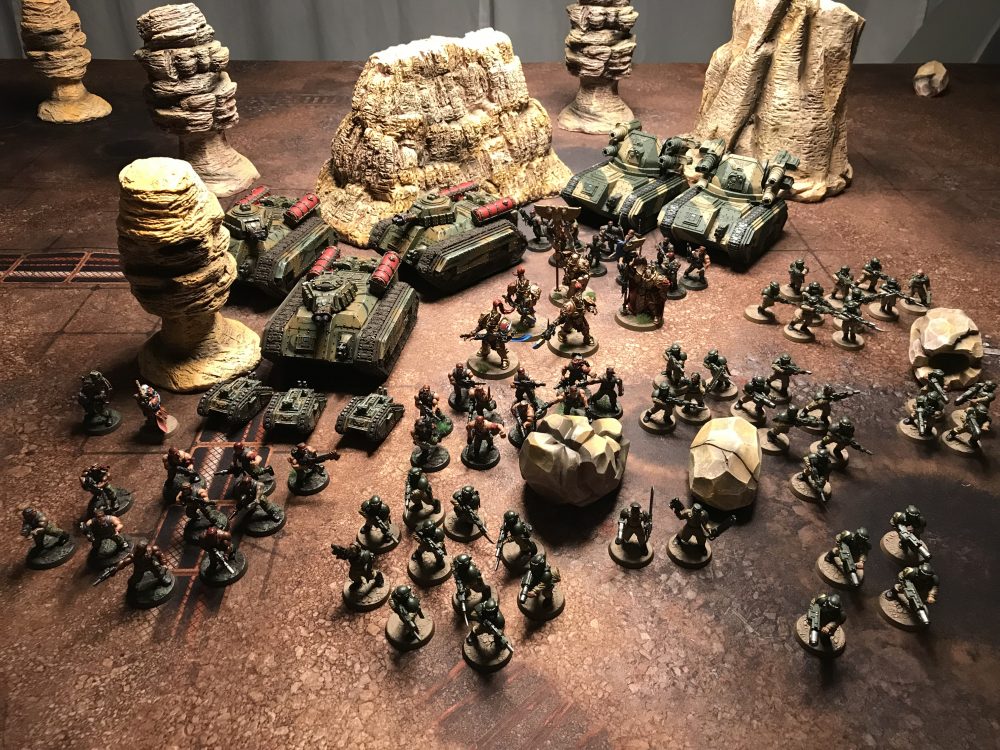 My force before deployment against the Dark Angels

That’s two Battalions and a Patrol. For a total of 13CP minus 1CP for the extra Relic. 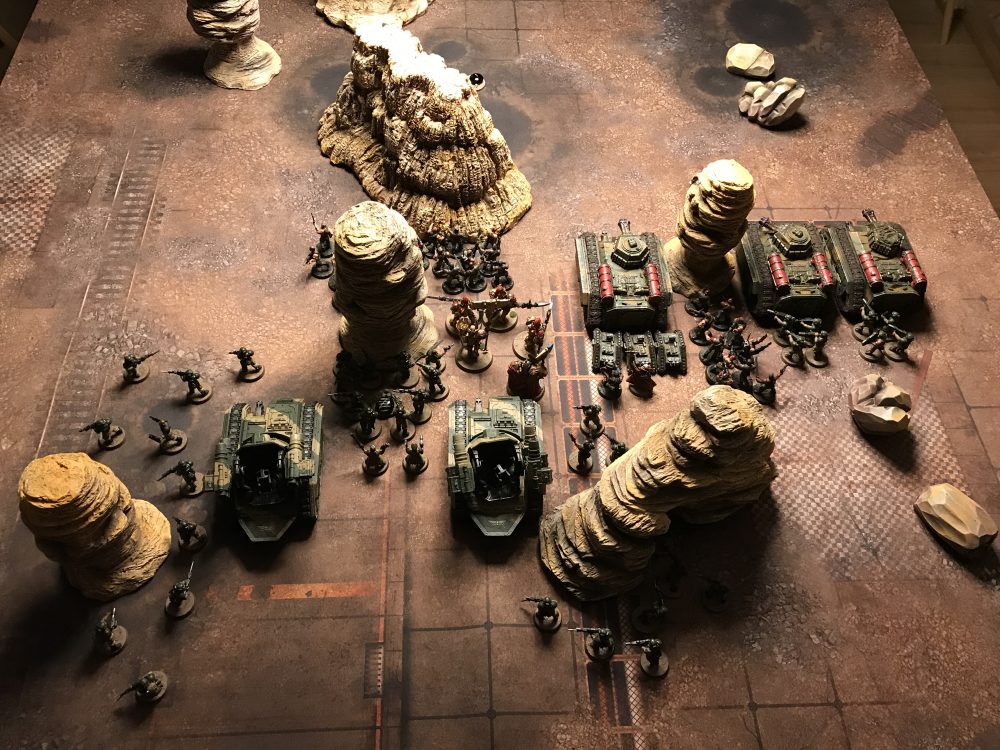 We rolled Beachhead in Chapter Approved 2018. It’s a decent mission. We both place an objective on our deployment and one goes in the centre. The enemy objective is worth 3VP at the start of each of your turns starting from turn 2. The centre is worth 2VP and yours is worth 1VP.

The terrain was a little sparse – that’s my fault for not grabbing more from the garage. It’s the Badlands Terrain from Gamemat.eu. Looks awesome right!? 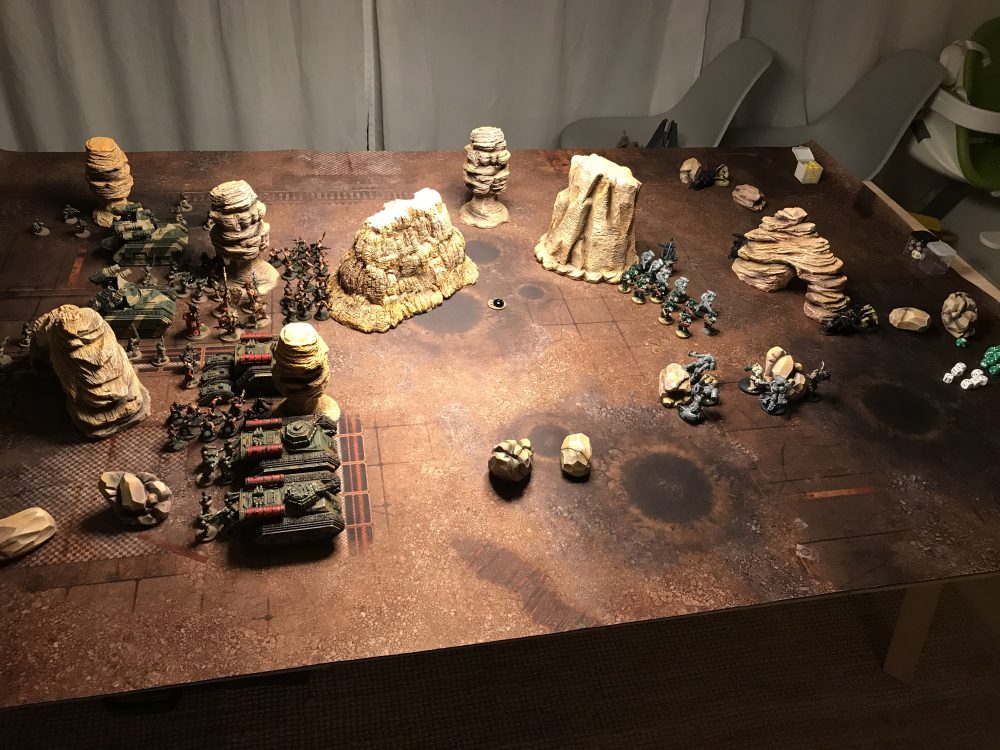 All of the enemy force moved forward apart from the Thunder Fire Cannons – see if you can spot them? They were proxied using a Bike and a Terminator for each!

There was not a lot to move as the Dark Angel force had a low model count. Onto shooting. The Thunder Fire Cannons removed a squad of Catachan with ease giving the Dark Angels First Strike. They then focused on the Custodians, killing one, and taking a wound off another. The Plasma Exterminators on the Inceptors went for a Hellhound and got it down to 5 wounds. Phew, that could have been awful had it been destroyed and explode.

The Dark Angels ended with 1 VP thanks to First Strike.

My tactics needed to be aggressive. But first I used Jury Rigging for 1CP to get a wound back on the Hellhound, bringing it back to its top stat line and a 12″ move. Note: Thanks for the comment from Tomoyuki, this was an unintentional error. You cannot move after using Jury Rigging. :-/

I also cast the -1 to hit power on the Hellhound.

The Catachan Jungle Fighters moved forward and then used Move, Move, Move to move an incredible amount for one turn. This put 20 Guardsmen on the central objective on my turn 1, ready for that 2VP at the start of my turn 2. The Hellhounds rolled forward with the Cyclops hugging close behind. The Devil Dog remained in place. The Command Squads also shifted around the side of the Devil Dog to get a look in on the Inceptors. 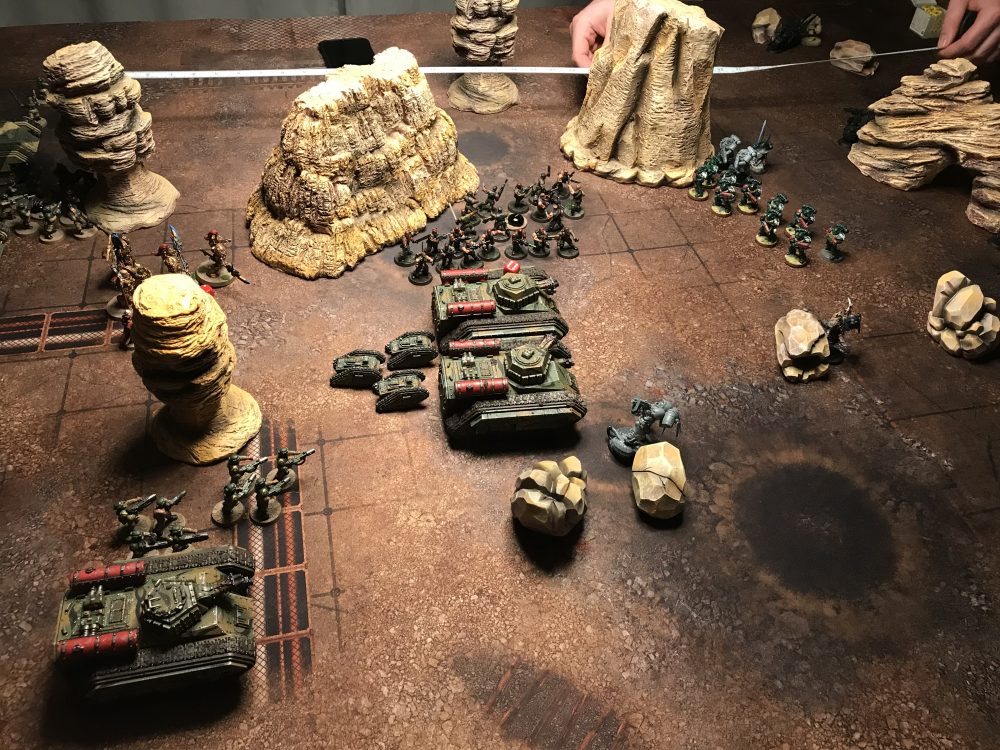 Shooting went well, but not as well as I would have liked. I tried to remove the Inceptors but one survived so I did not get First Strike. The Hellhounds did very well against the Marines thanks to rolling a high number of hits. The Plasma and Meltas also did well, but still, I came up short. The Wyverns went for the Hellblasters amongst the green Tactical Marines, being proxied for Primaris Marines. The Wyverns killed three Hellblasters but I should have finished off the Inceptor. I was just trying to remove all the Plasma I could from the enemy as that was the main threat against my armour. Without the Plasma, the Dark Angels would really struggle to defeat me.

I finished with 0 VP.

The Drop Pod arrived with the Devastators and 4 Heavy Bolters, as did the Death Wing Knights. The movement was minimal from the Dark Angels and mainly saw them try and consolidate towards the centre of the table for the 2 VP objective.

Knowing I would gain 2 VP at the start of my turn the went nuts for the Catachans in the table centre. And it worked. All 20 were lost and I was no longer on the objective! 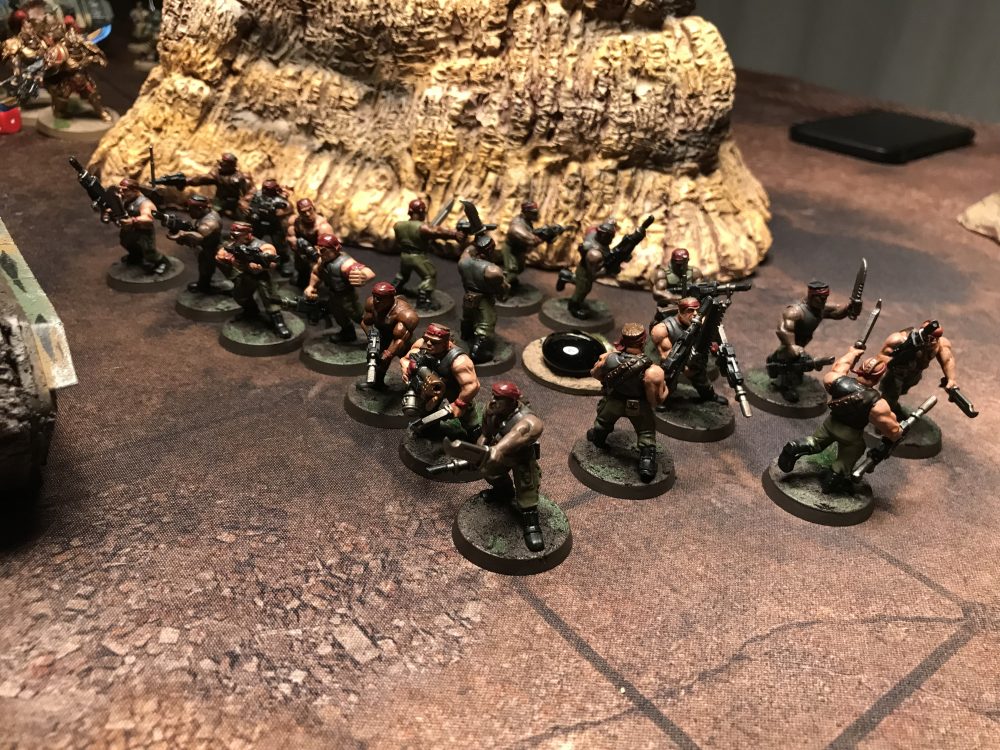 Another Custodian was lost, leaving one. With so much Plasma lost the Dark Angels struggled to kill the Hellhound that was on 6 wounds, it was taken down to 4 though. The final Inceptor charged my Custodians and died. The Death Wing Knights also charged their 9″ and made it into my Guardsmen in the backline. They killed all but one.

The Dark Angels gained 1 VP for holding their own objective, taking their total to 2 VP. 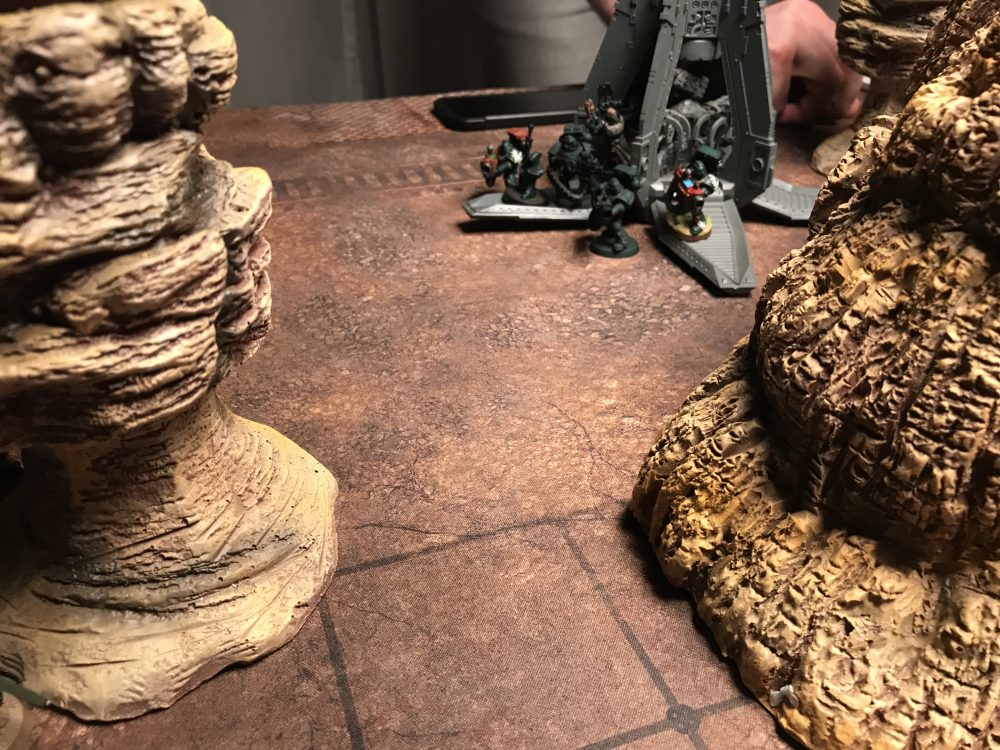 We were running out of time, so it was time to get the Hellhounds and Cyclops into play.

The total tally of enemies was;

While it was not as good as it could have been, had the Hellhound Exploded too I think I could have finished off Cypher. But it was fun! 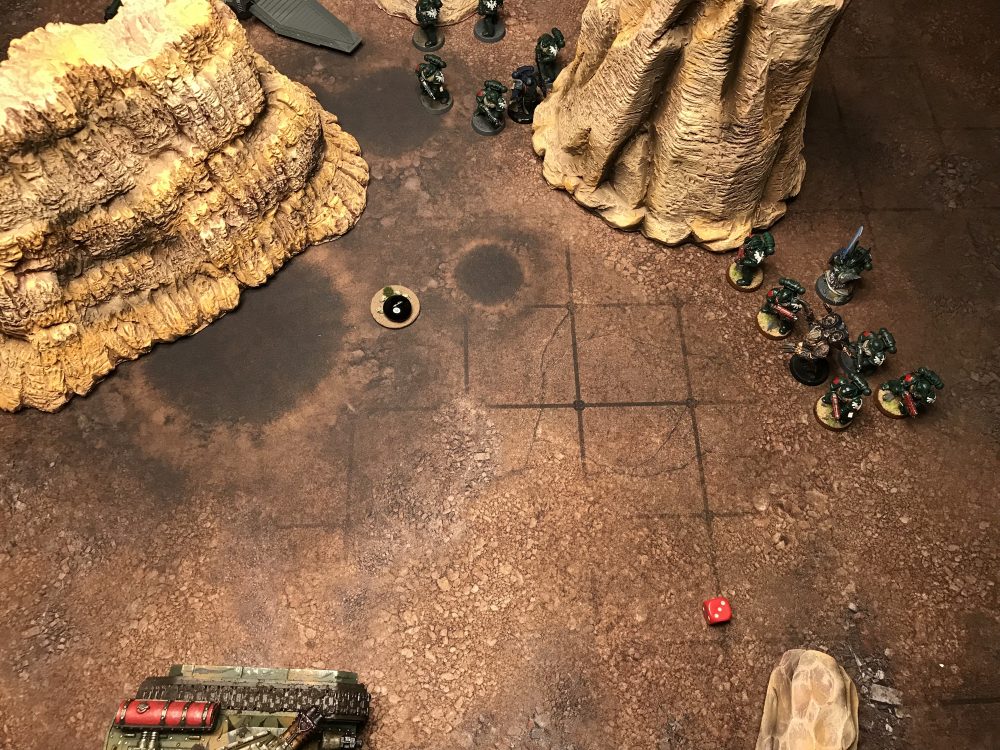 The hole left after all the explosions

Trajann, the Catachan Company Command and my Psyker all charged the Death Wing Knights. The Commander failed. Trajann single-handedly killed two while the Psyker killed none. They hit back and killed the Pysker, Trajann was fine. So I opted to use Trajann’s Moment Shackle and fight again with him! He took out another two Death Wing Knights.

I had my own objective, but not the centre one, giving me 1 VP, taking my total to 1 VP.