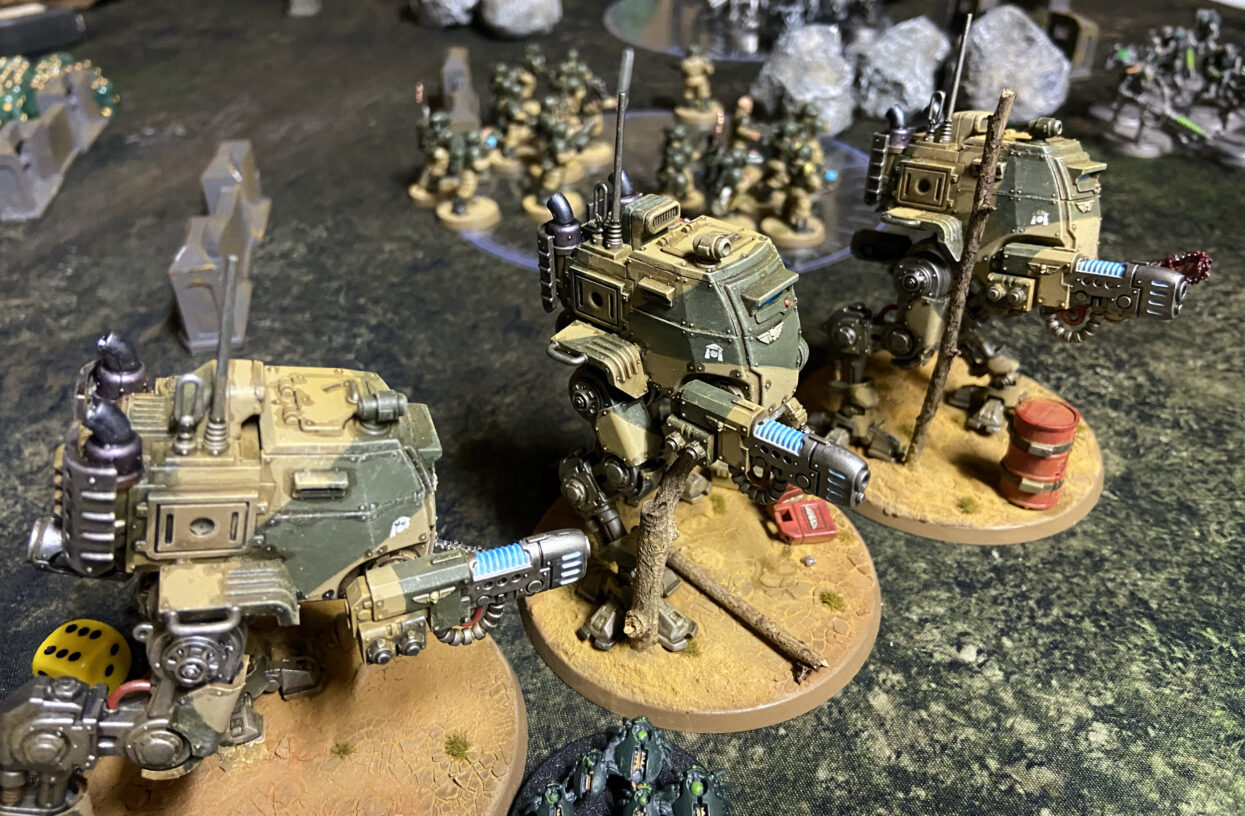 My third 9th edition game with the new Guard Codex against Necrons.

This was my first game of 2023, an Open Play game using the new Guard Codex against the Necrons. 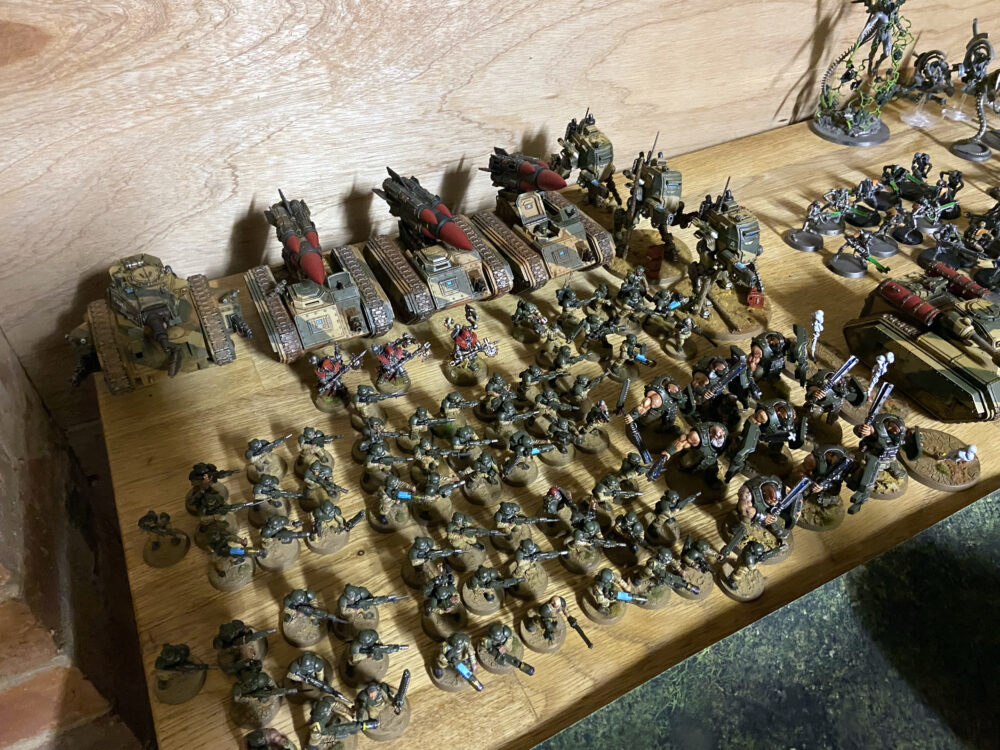 The Mission – Supplies from Above

At the end of each player’s Command phase, they score ten victory points for each of the following conditions:

These cannot be scored in the first Battle Round.

The Objectives also all move D3+3″ in a random direction at the start of each turn.

The battlefield was set up with one end of low terrain, rocks and low barricades and the other with larger rocks. No ruins. Just rocks!

I put all my vehicles in the big rocks to hide on the left flank. The Bullgryns went into this mix because I knew the enemy would come for my tanks in melee. The rocks provided some great corridors for blocking off with Deathstrike missile markers!

Out of the right flank went the Sentinels and three Infantry units. The Infantry were neatly within range of a Master Vox for some bouncing orders. 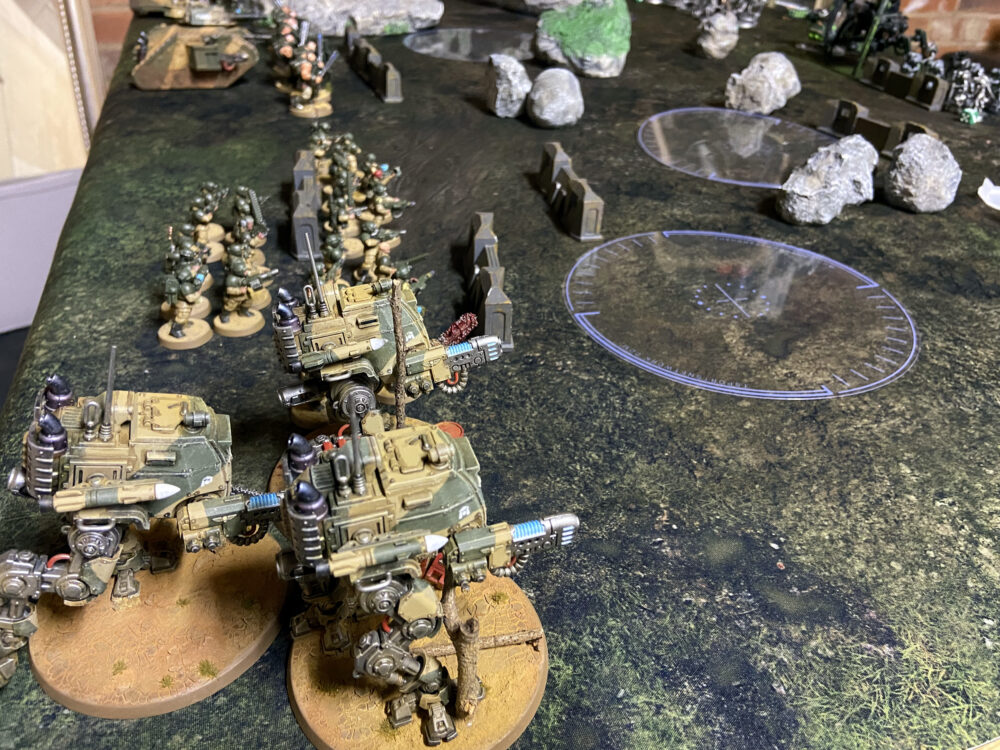 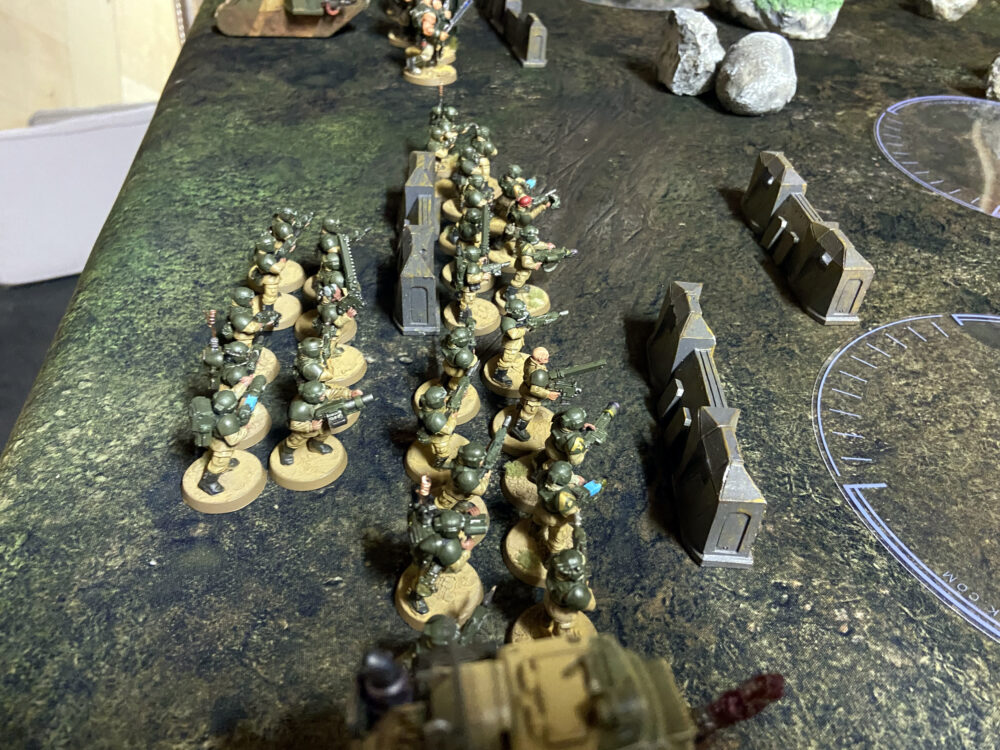 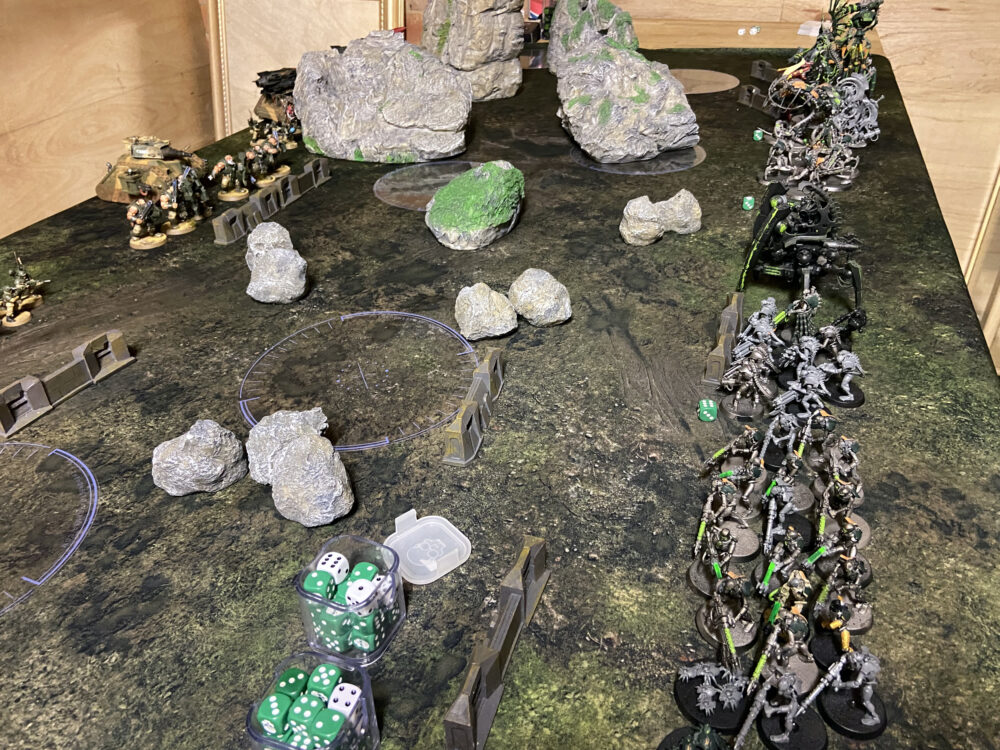 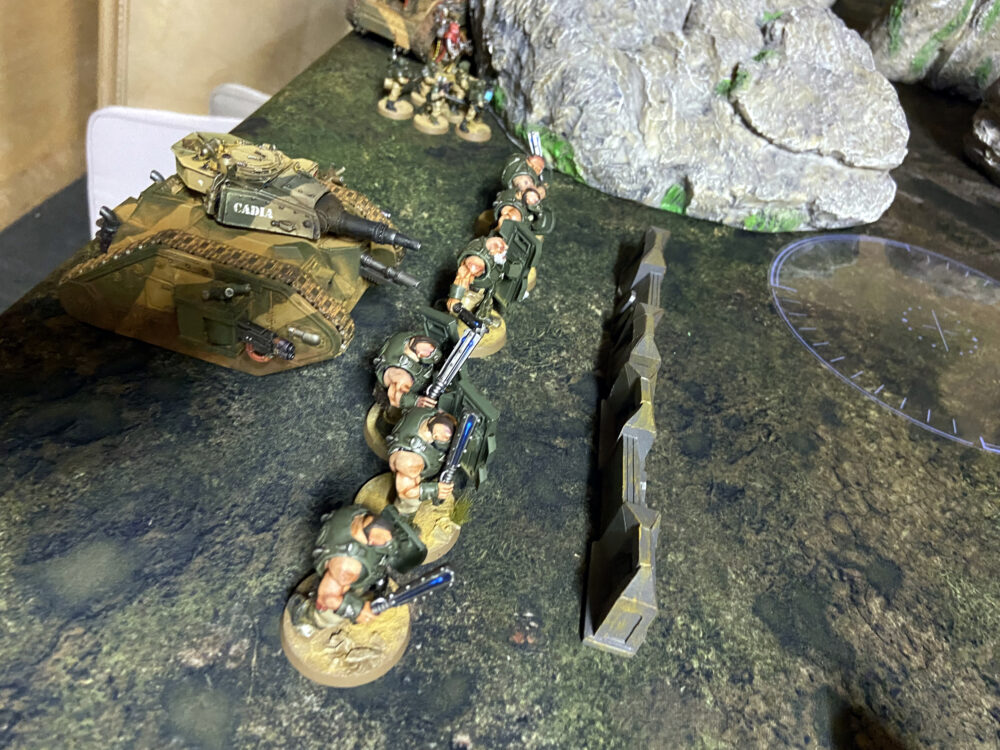 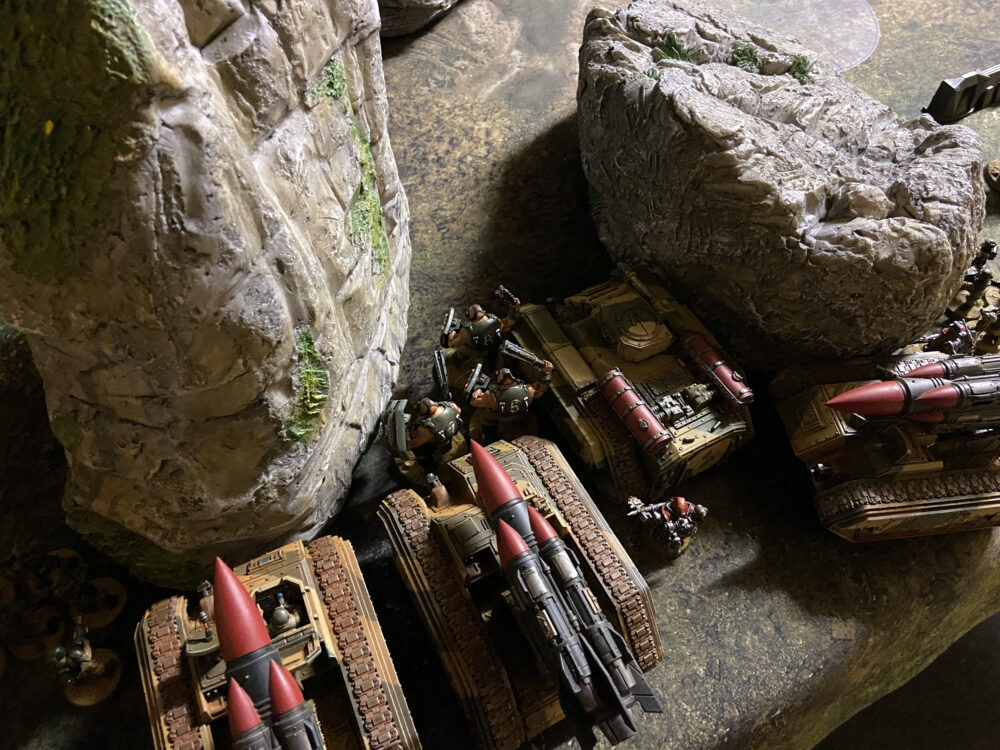 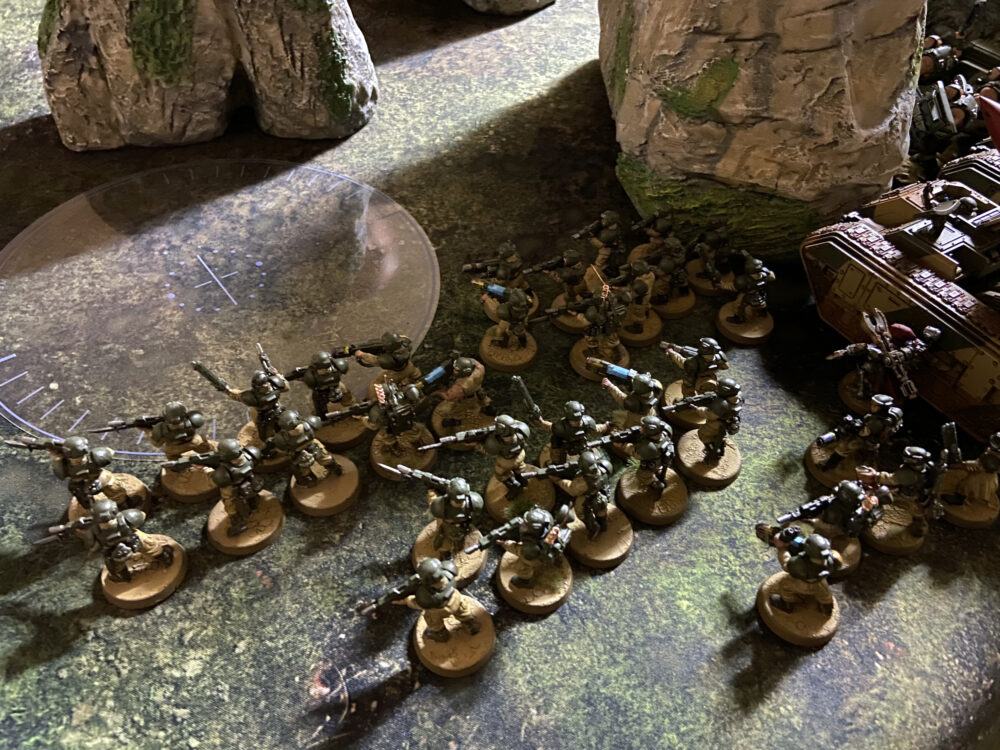 Because this was an Open Play mission, it was a bit different from my other games. My opponent doesn’t play that often, so it was just a bit of fun!

It was, therefore, a perfect game to try out the three Deathstrikes. And frankly, that’s what you came here to hear about? I took all three with the Godspear missile.

They did not kill anything all game, and the one that fired against the C’tan rolled a one! Therefore zero damage. The C’tan happily strolled into the Deathstrike drop zone because it would only lose three Wounds due to the Wound Cap rule.

Having said that, they were fun to use and stopped the enemy from charging through those rocky corridors into my Deathstrikes. You can see the smoke markers I use to denote the Deathstrike missiles around the Hellhound in the below images and then again around the C’tan. That corridor around the Hellhound saw no enemy action until I moved the markers. It completely stopped the enemy from coming at me via the quickest route.

I am unsure how this would play out in Matched Play games because the Godspear Missile does not cover an Objective. So it might be useful to take one and place it neatly in front of your frontline. A decent placement should mean it can stop a charge; if a unit charges, it would hopefully be stuck inside the Godspear missile’s marker radius.

This was my first game using Bullgryns from the 9th Edition Codex. While they are the same stats-wise, their new -1 Damage makes a big difference. Damage 2 weapons go from needing two successful HIts, Wounds and Failed Saves to needing three. While on the face of it, that does not seem like a huge difference, that does make the difference.

It felt like I would normally lose one or two models using 8th Edition Bullgryns from a shooting attack – I was now losing zero or one. In combat, they did OK. Nothing stands out. They just plugged away and were a pain to get rid of.

Placing the Commissar order on them to deny Deep Strikes within 12″ using the Steel Commissar Leman Russ was useful. It meant that the enemy did not use The Veil of Darkness until turn three.

Lastly, my newly completed Armoured Sentinels… these armoured chickens were so good, which was unexpected. They are considered good now, but I never saw them as that good on paper. And I think it comes down to a new word, which has been hard to use with the Guard for the last couple of years. And that word is utility.

The number of positive things they can do on the battlefield is high for their points. 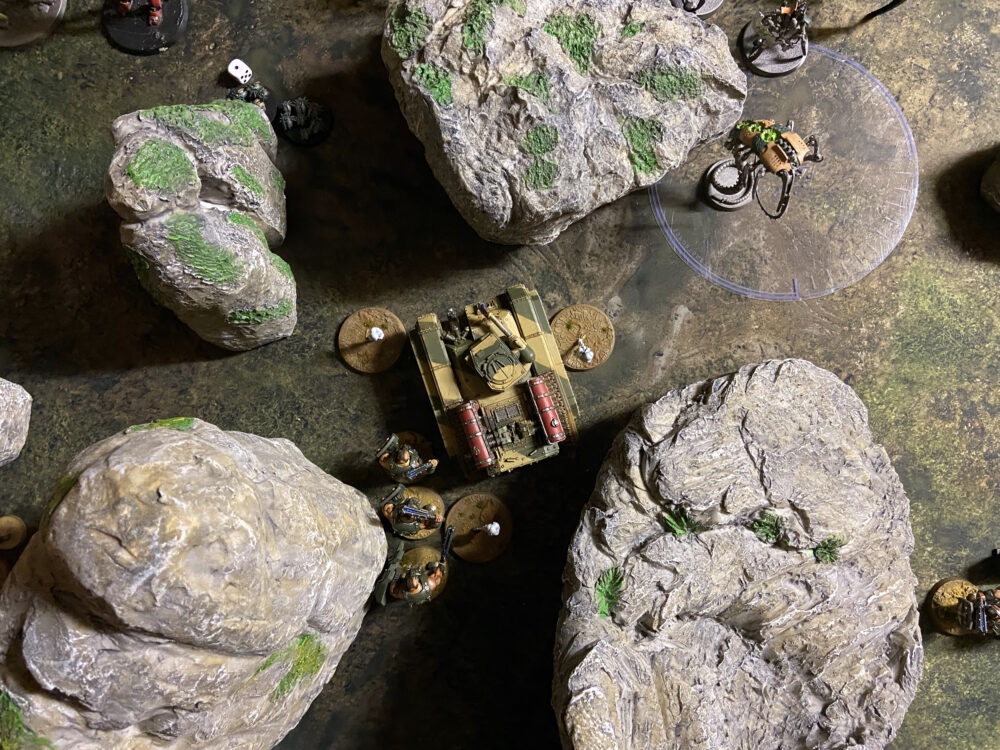 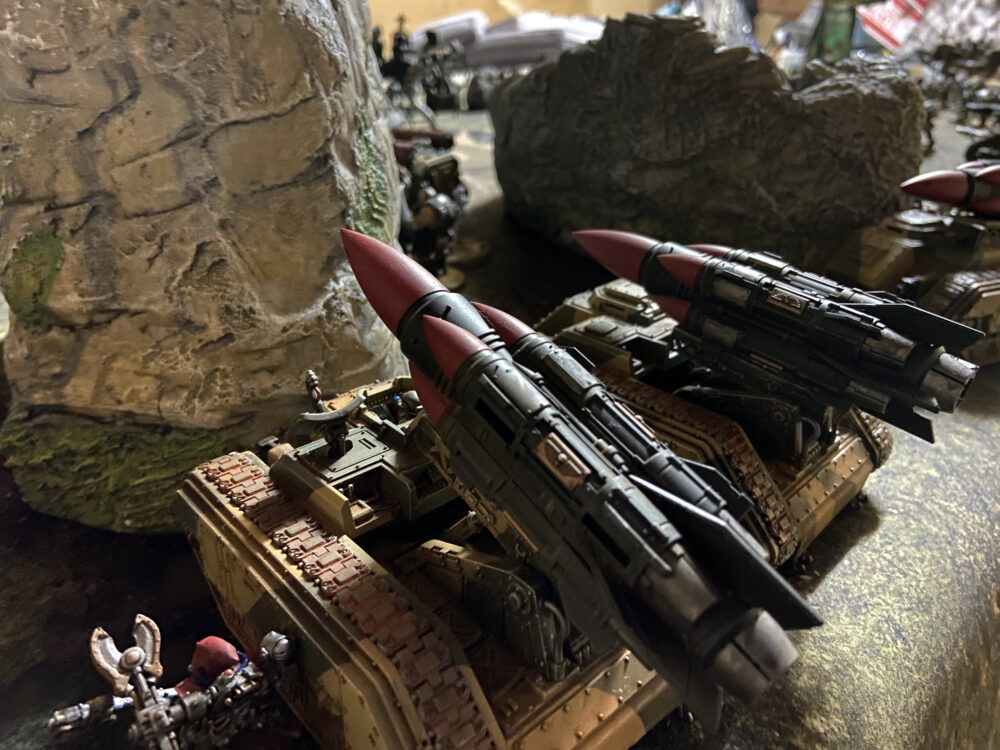 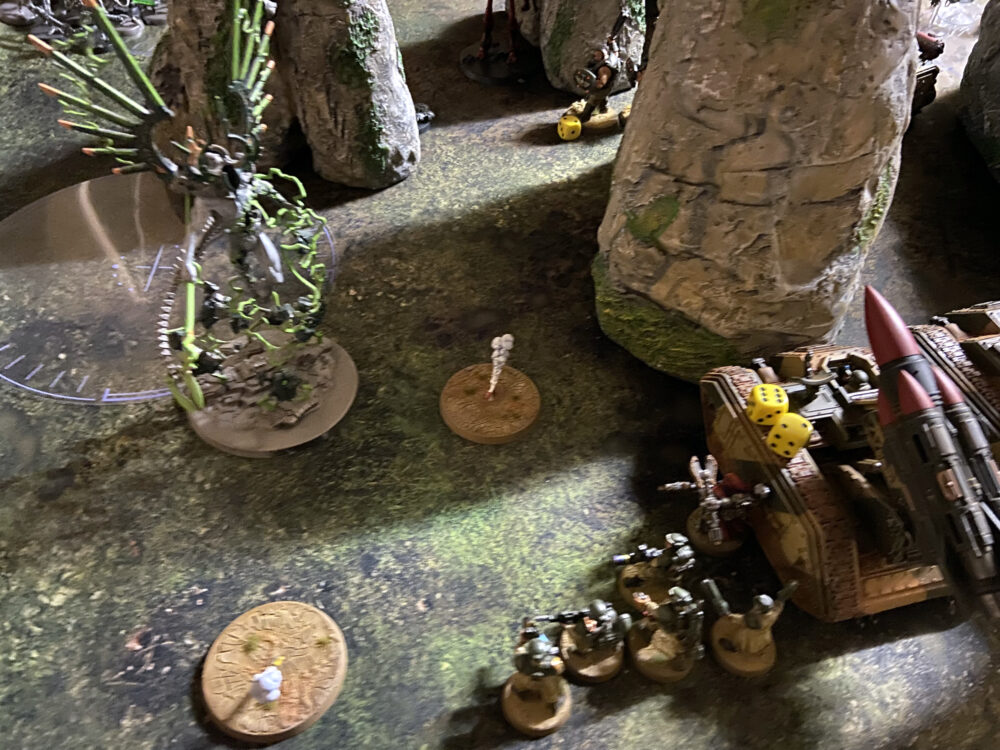 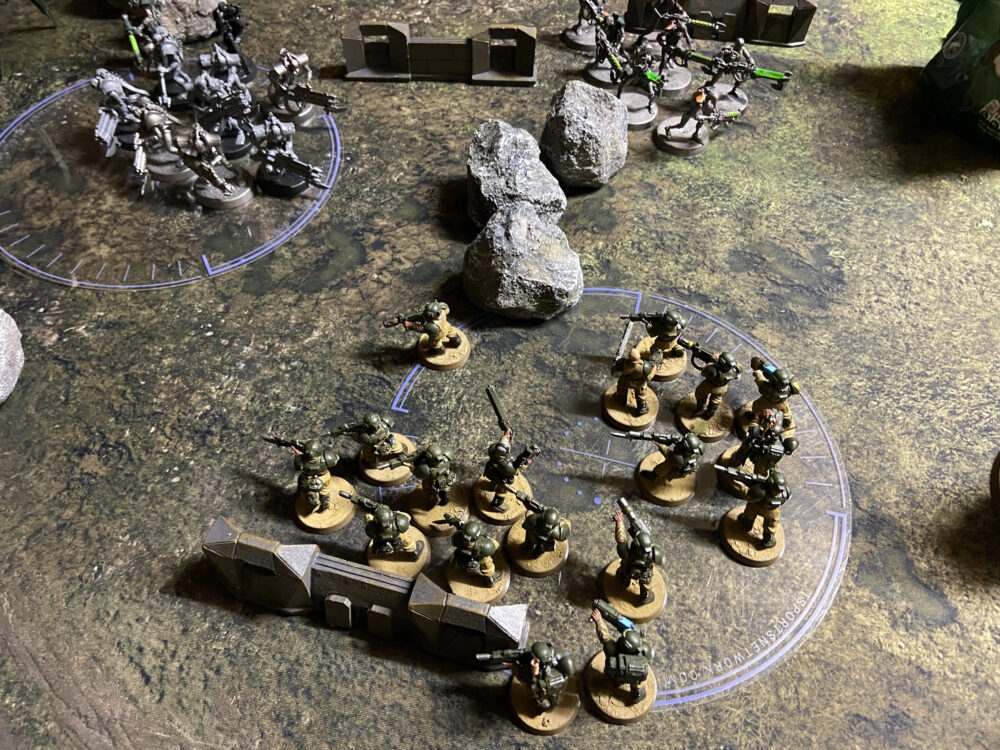 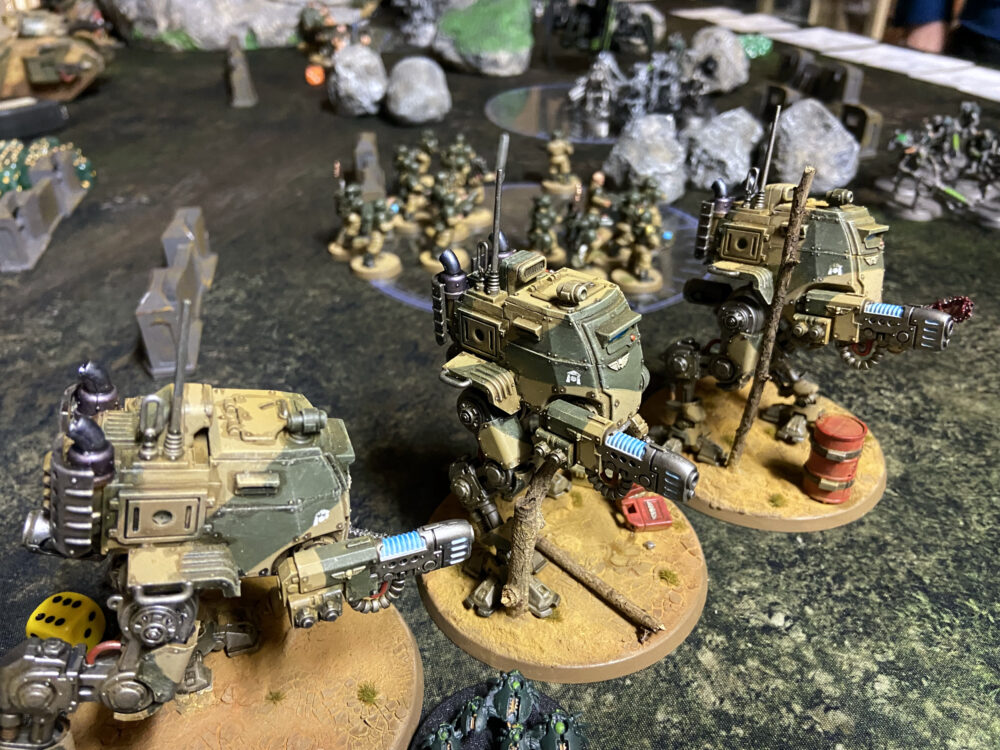 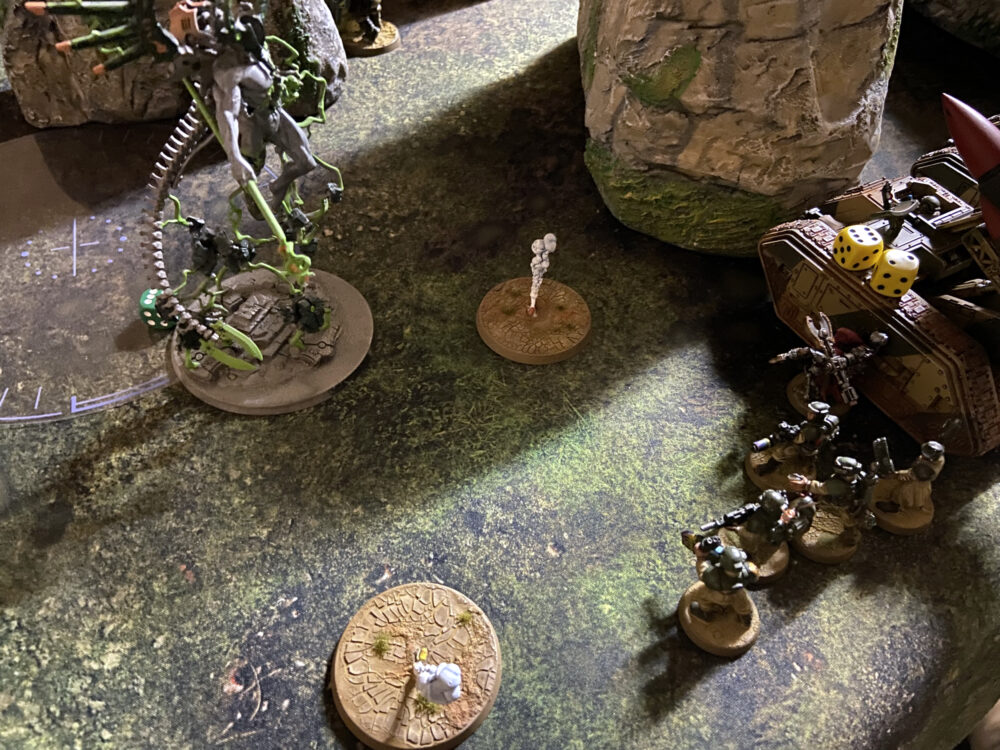