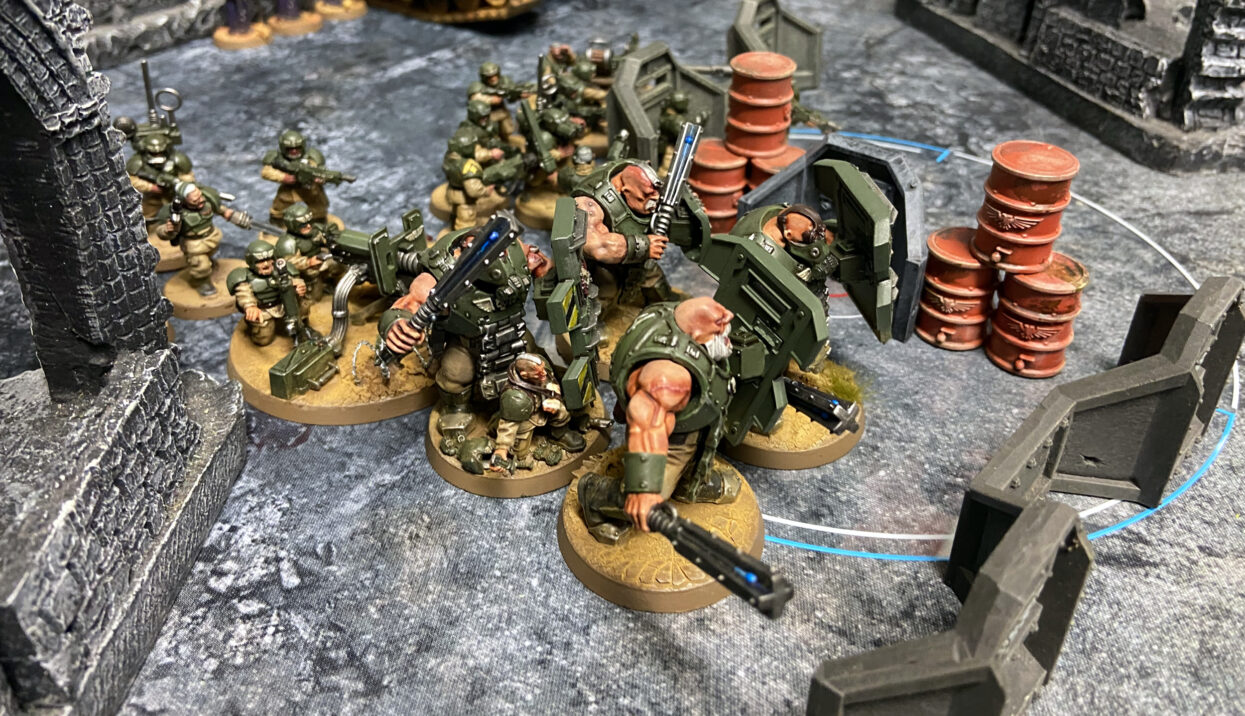 My list can be seen here on my 2,000pts Cadian page for the League. This list is slightly different from the one listed because of points changes and the ability to take some war gear for free. So my Infantry squads now all have;

I get one additional Warlord Trait and Relic as normal on top of my special League List. For this game, I took; Relic of Lost Cadia and Gifted Commander on my Demolisher Tank Commander.

The Mission – The Scouring

There is also an Auspex Scan action to be completed on each objective for 3VP at the end of the game. It starts in your Movement Phase and ends in your next Command Phase. 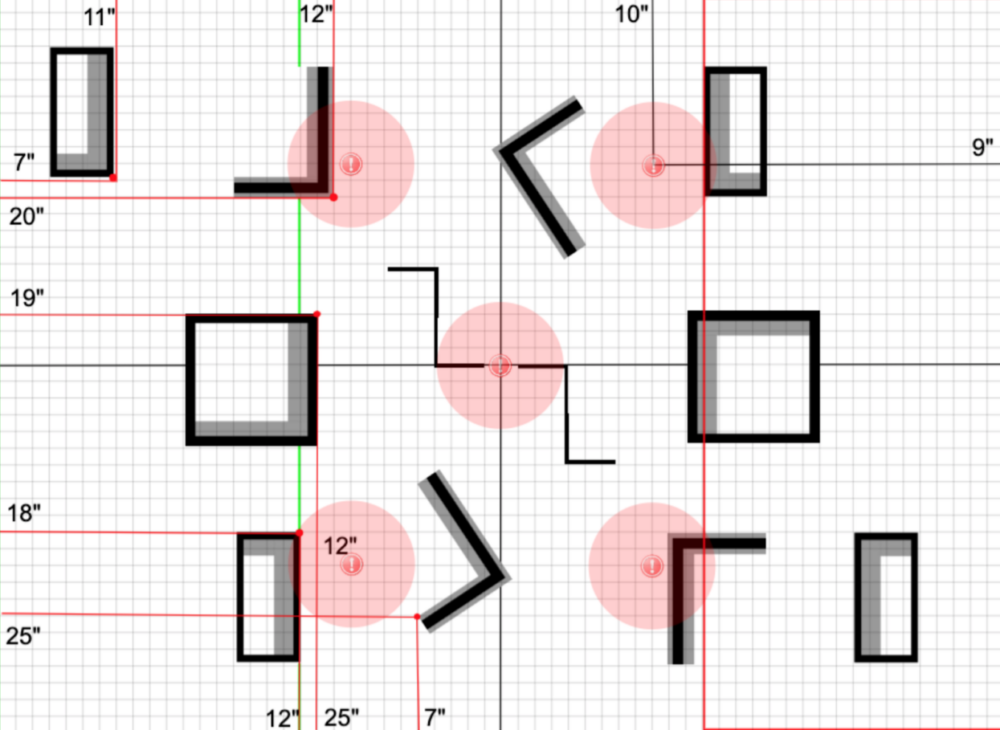 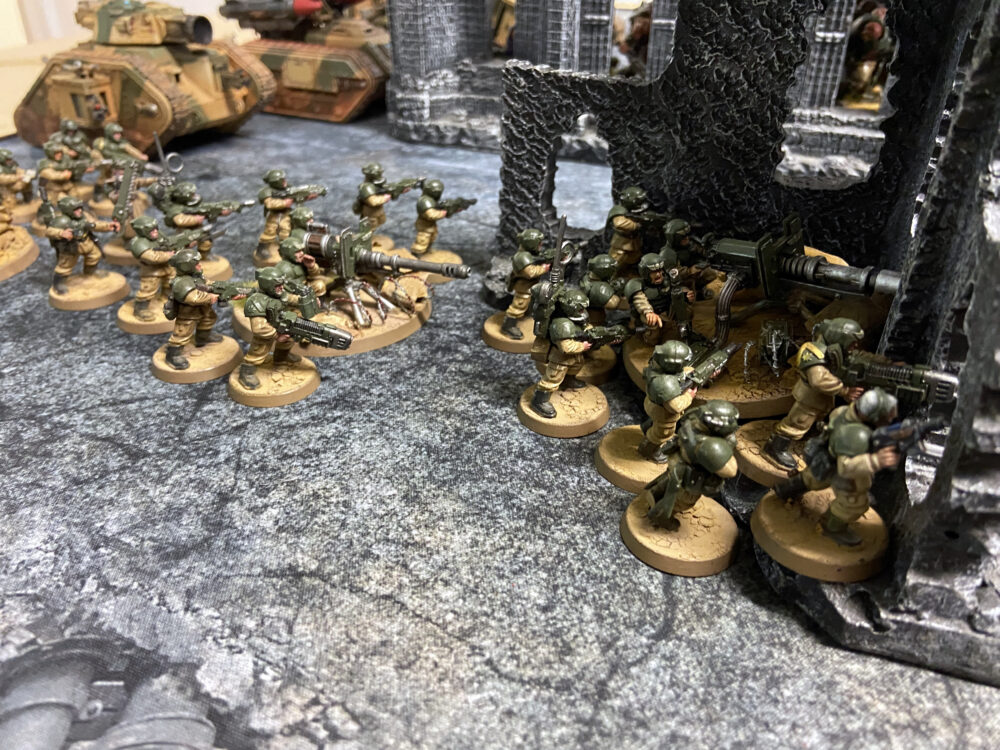 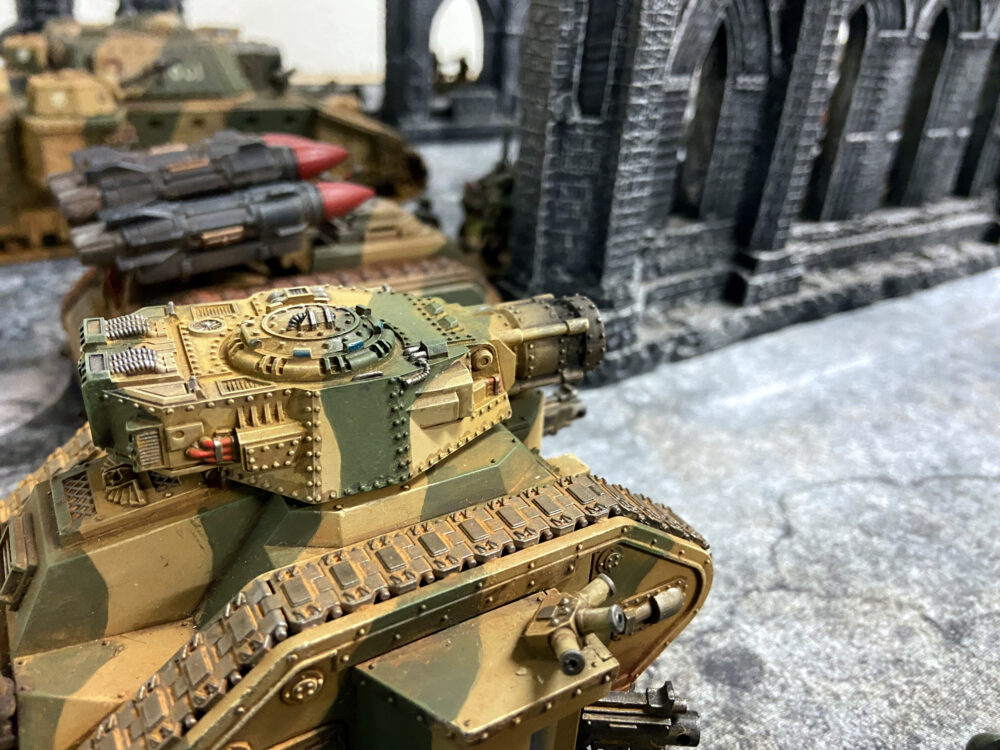 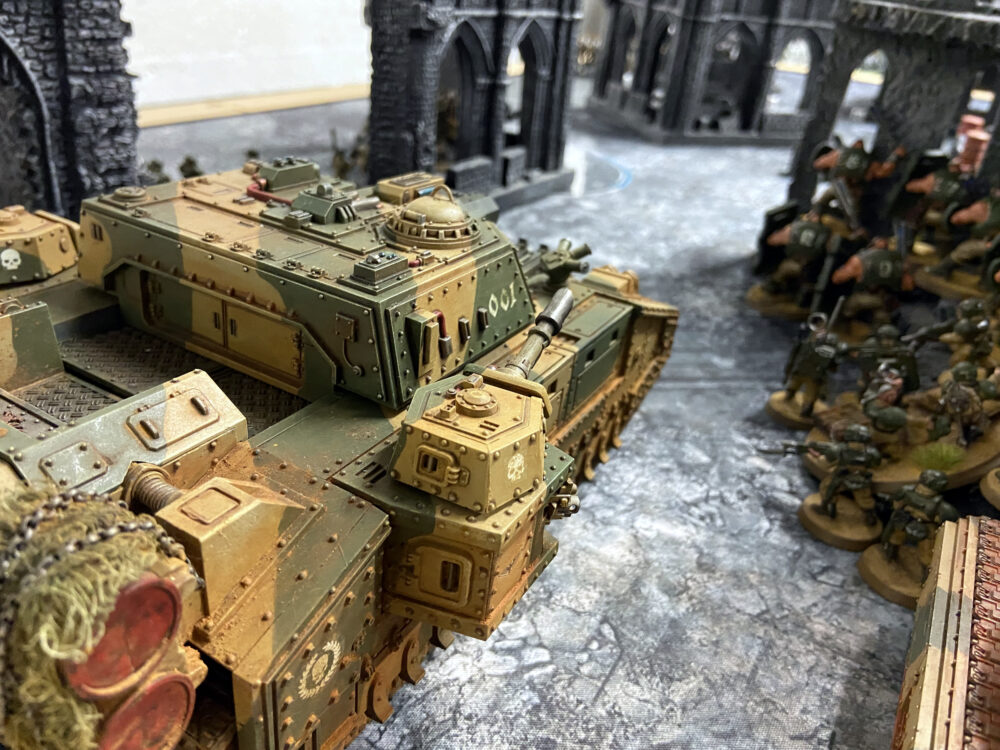 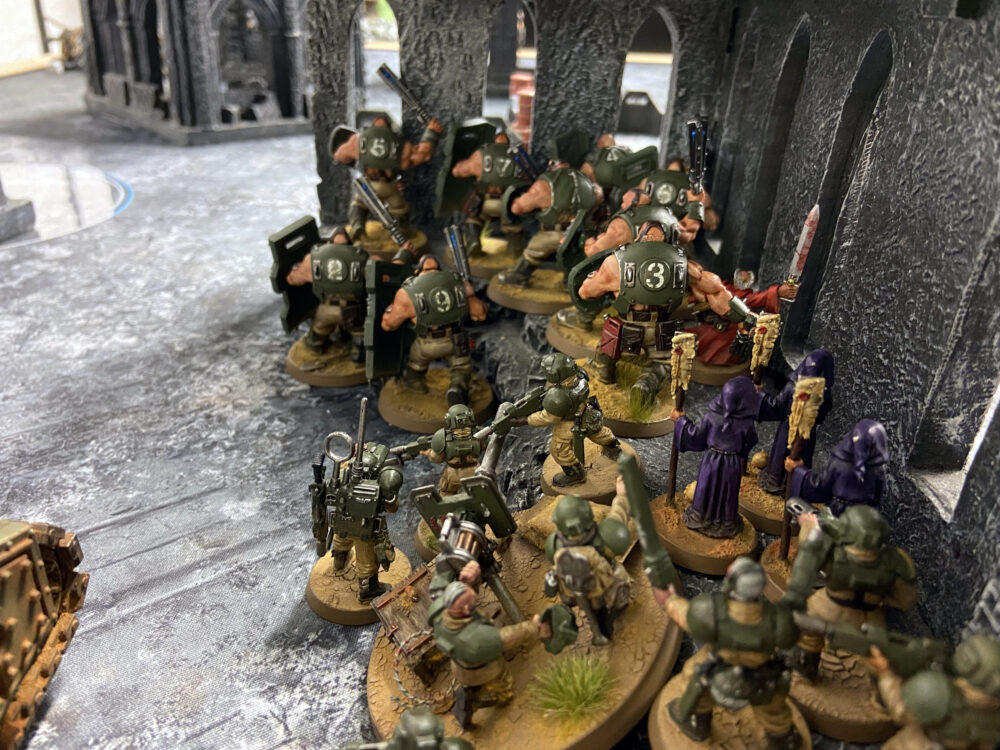 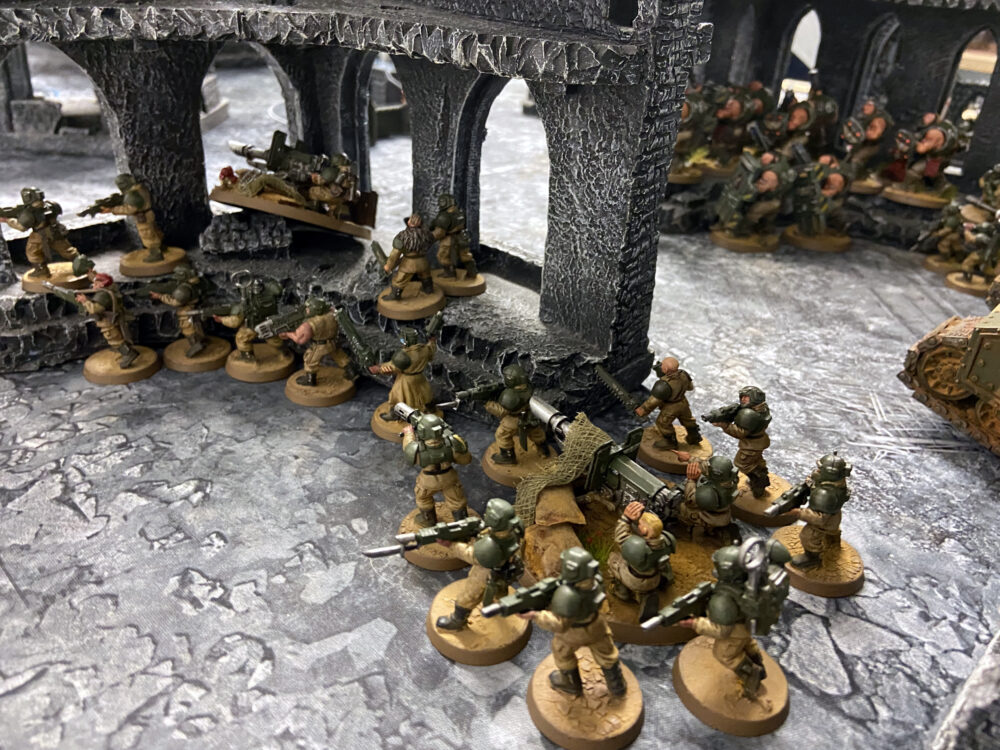 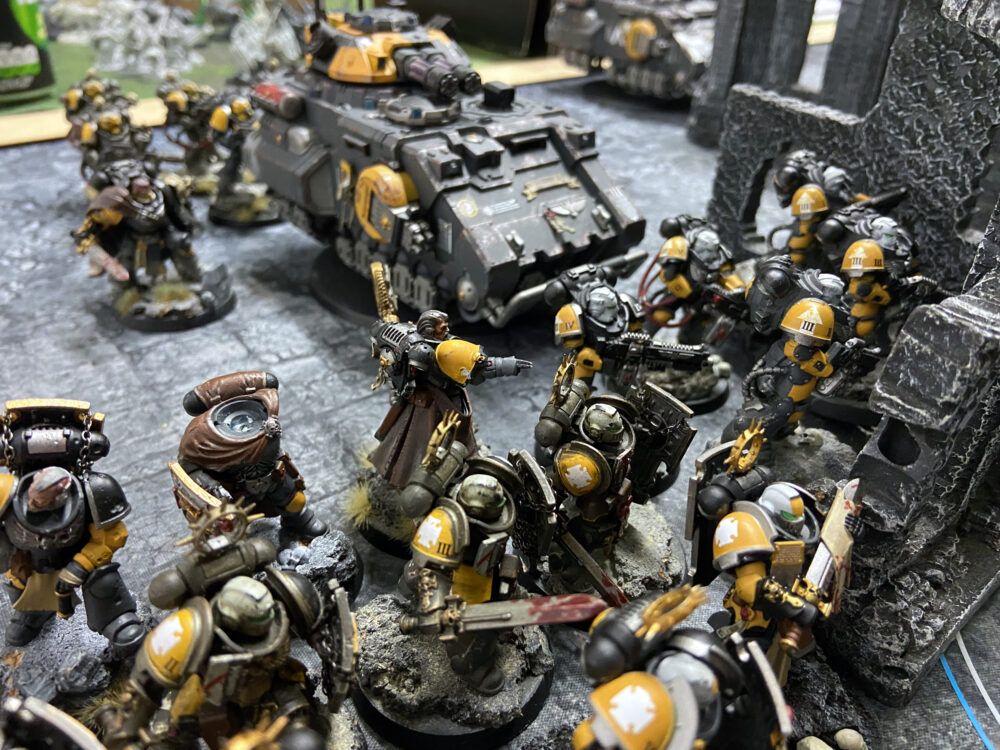 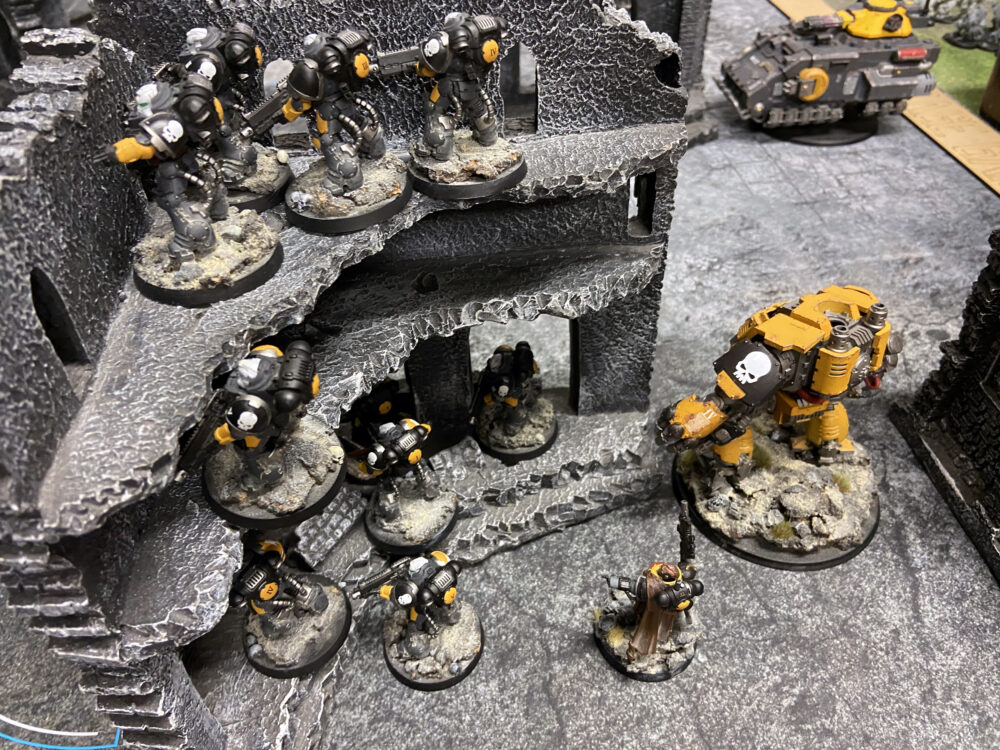 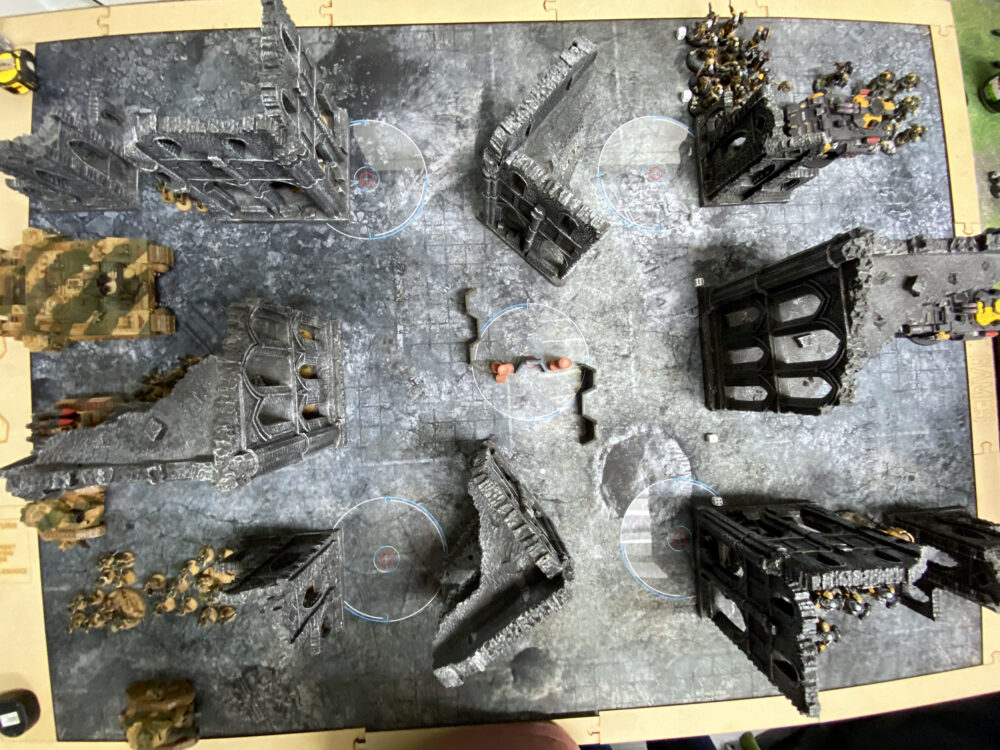 I started simply, on the right side, moved forward to hide and give me two units on that Objective.

On the other flank, I started the Auspex Scan action on the Objective for the Primary. I got Psychic Barrier and Nightshroud onto this unit doing the action too.

The Manticore killed one Eradicator. 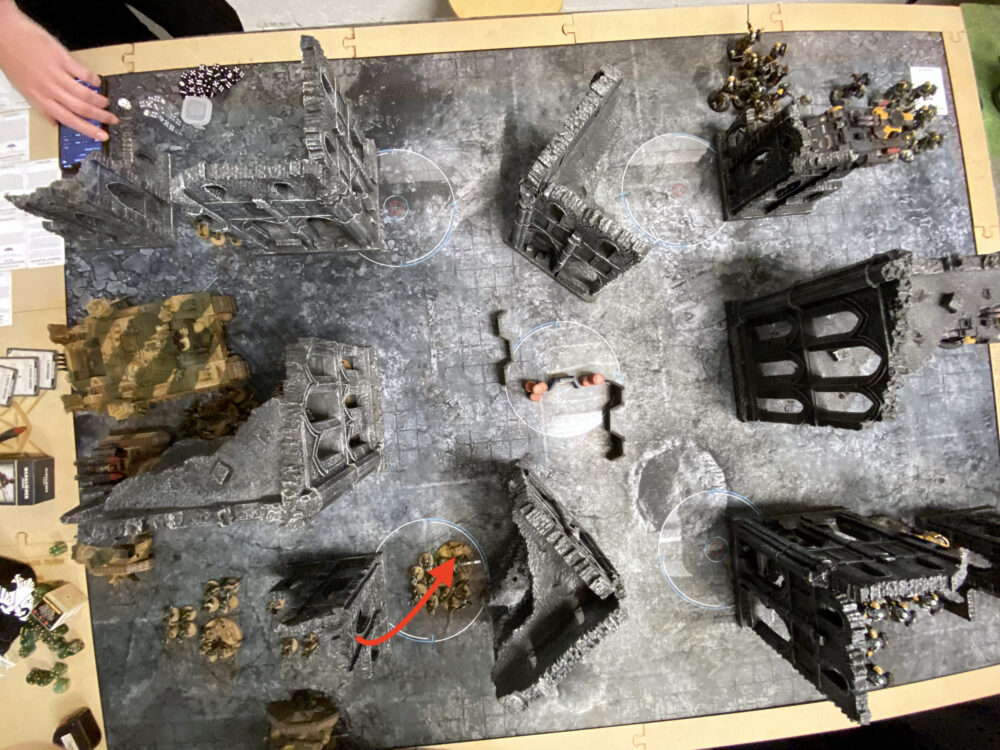 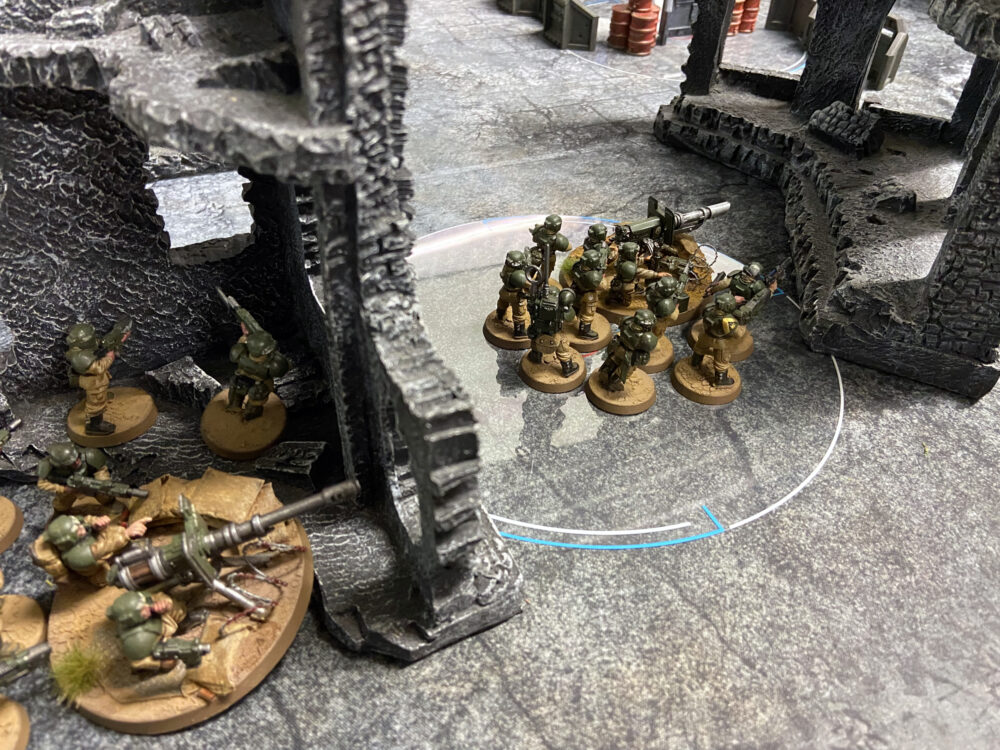 The enemy focused on my Infantry Squad doing the action, I had Psychic Barrier and Nightshroud on them, and they were receiving the benefit of cover. I also used Cadia Stands and Take Cover on them. That gave them a 1+ Armour Save.

They all died just. It basically took all of the Iron Hands shooting to remove 10 Guardsmen. 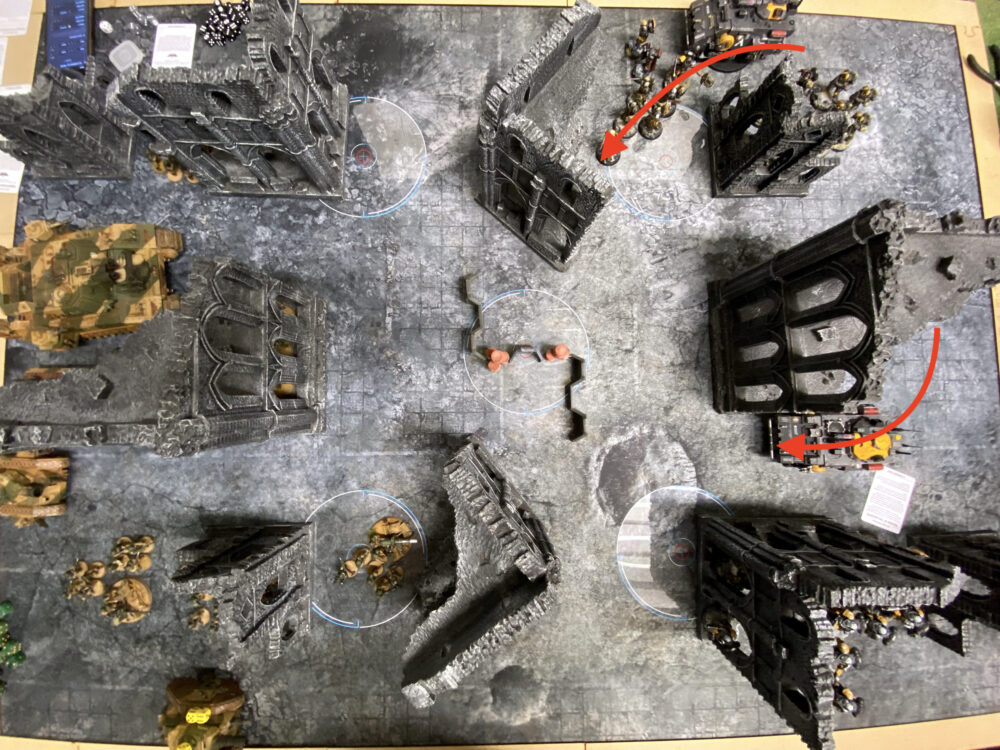 I pushed up with the Bullgryns and gave them Psychic Barrier and Nightshroud this turn. The right flank came forward and the left just hid in cover with my Warlord. 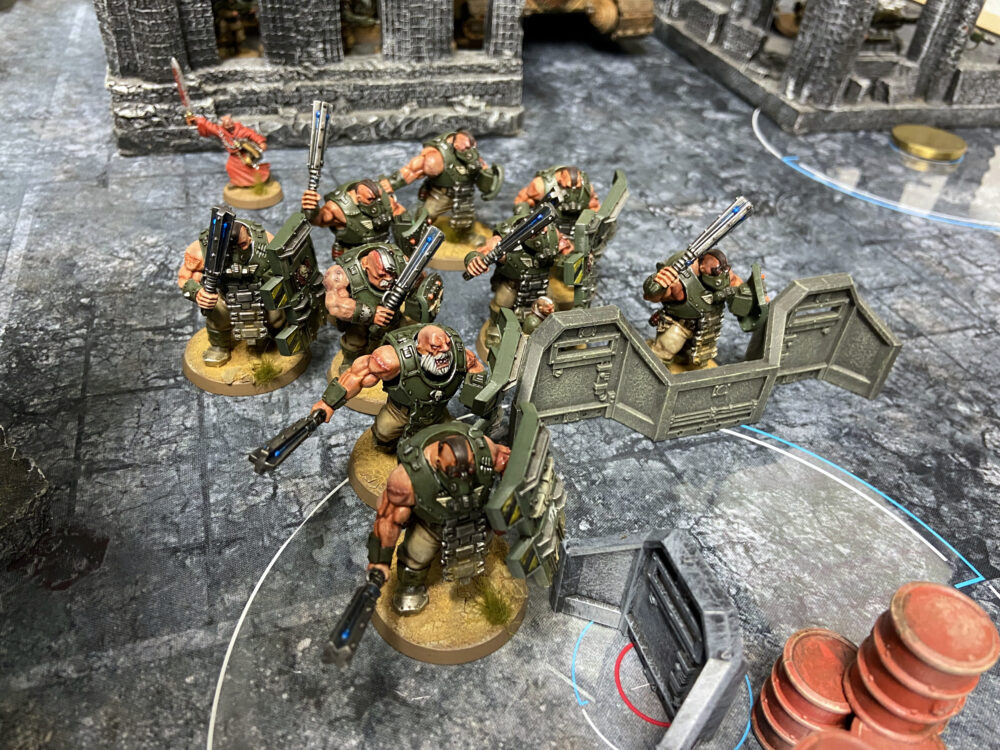 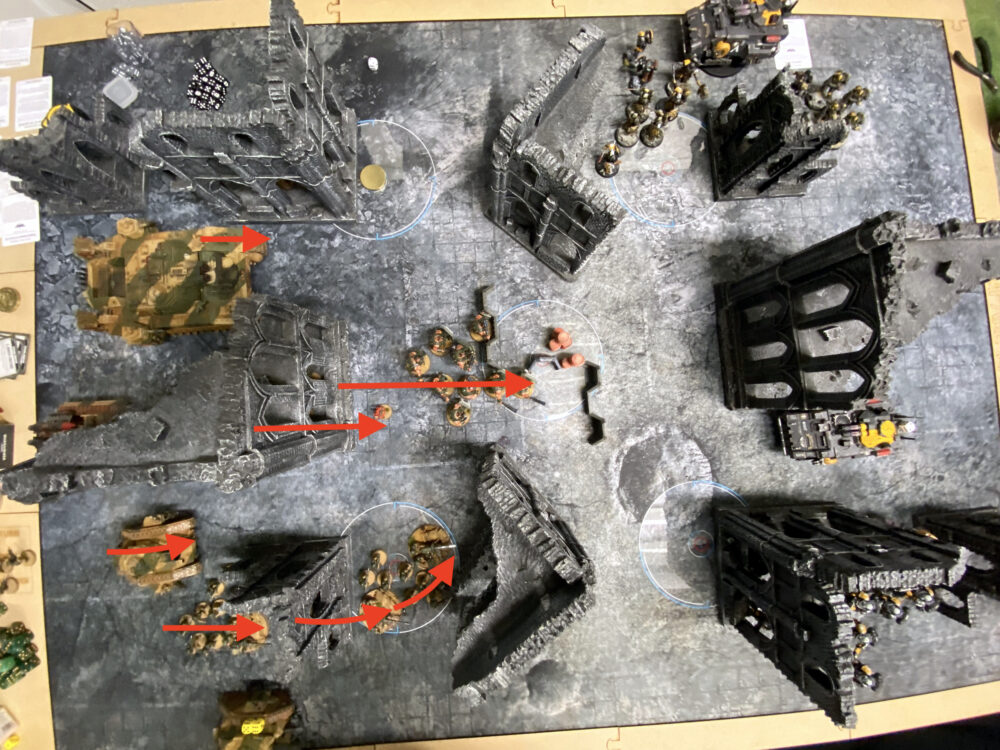 I lost five Bullgryns this turn in the centre, but they held, and this was good for the Primary. In the past, I am too cautious, I think, and then I lose out on the Primary. Pushing the Bullgryns up ensured I was on three at the start of my Turn 3.

I had gotten both of the enemy tanks onto two Wounds in the first turn… and in this turn, I failed to kill either of them. Those swingy dice working their magic again! 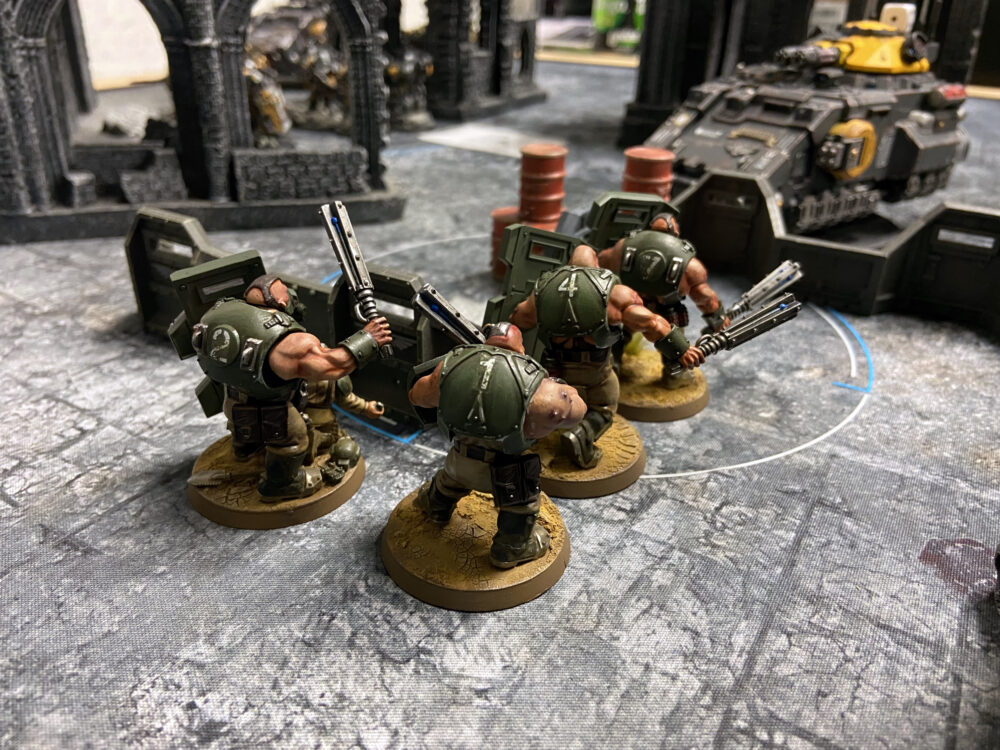 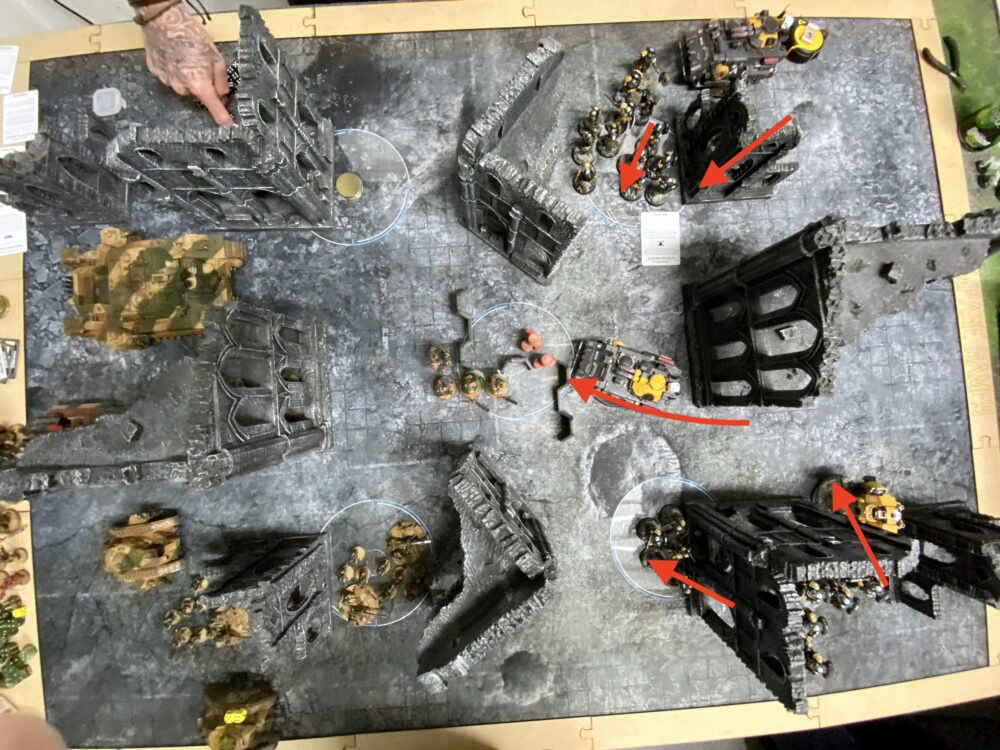 More moving up this turn. I finally killed an enemy tank in the centre and moved the Stormlord up.

I think so far. The Stormlord had killed about two enemy Marines. I forgot again the ability of the Astropaths to remove the benefit of cover from enemy units… which would have helped. 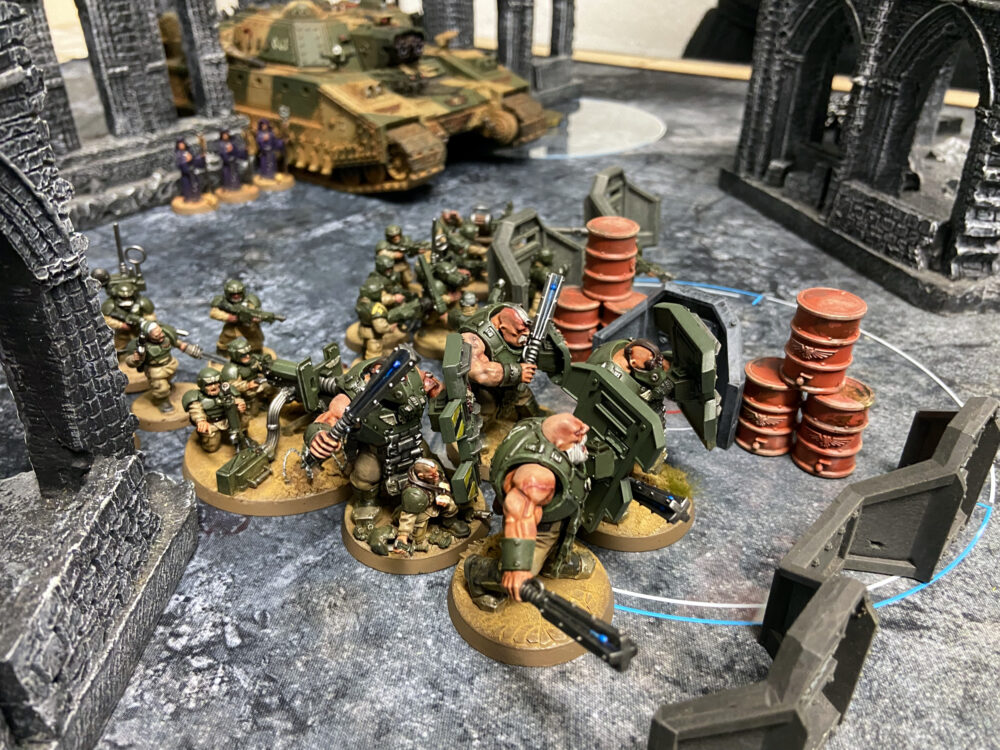 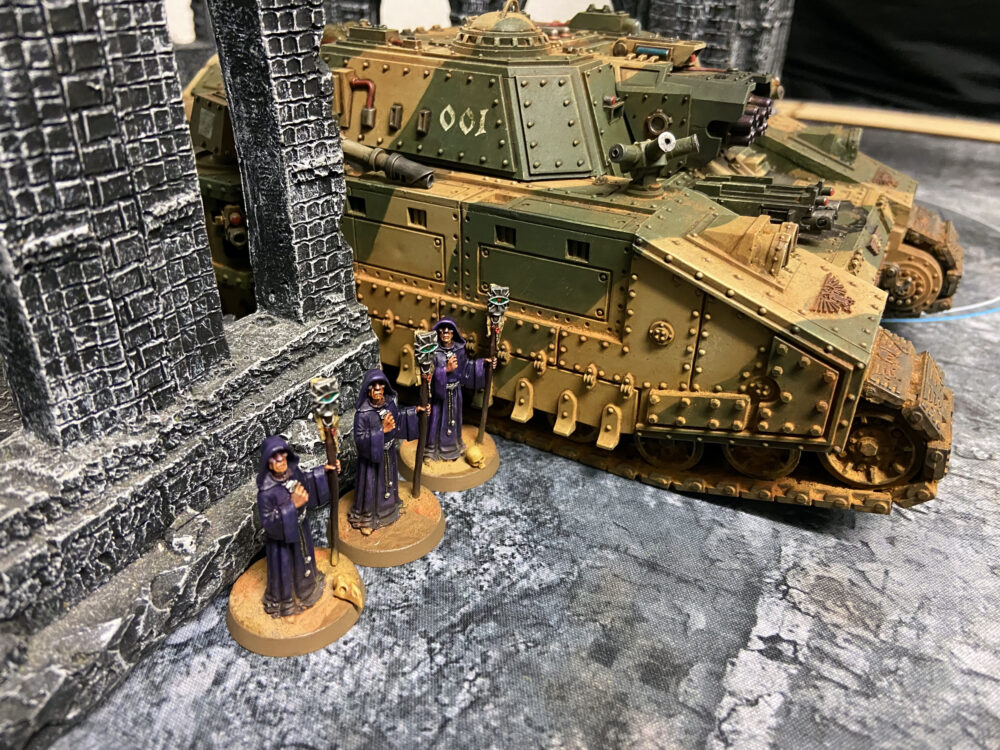 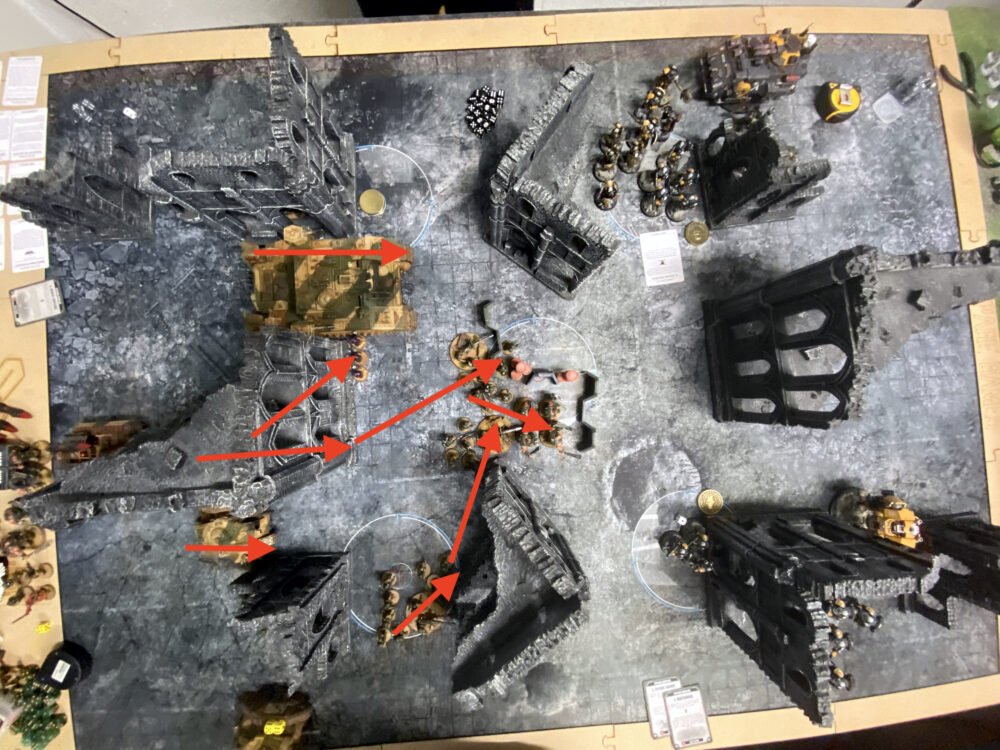 The Bladeguard made it into the centre, killing three Bullgryns. I lost a load of infantry too. 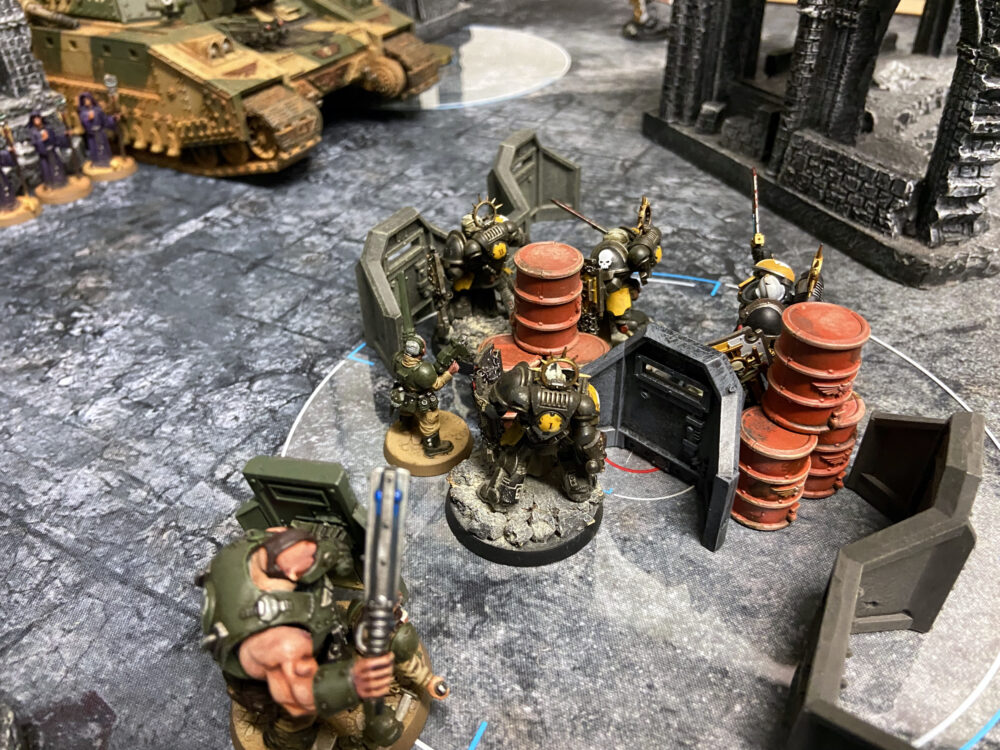 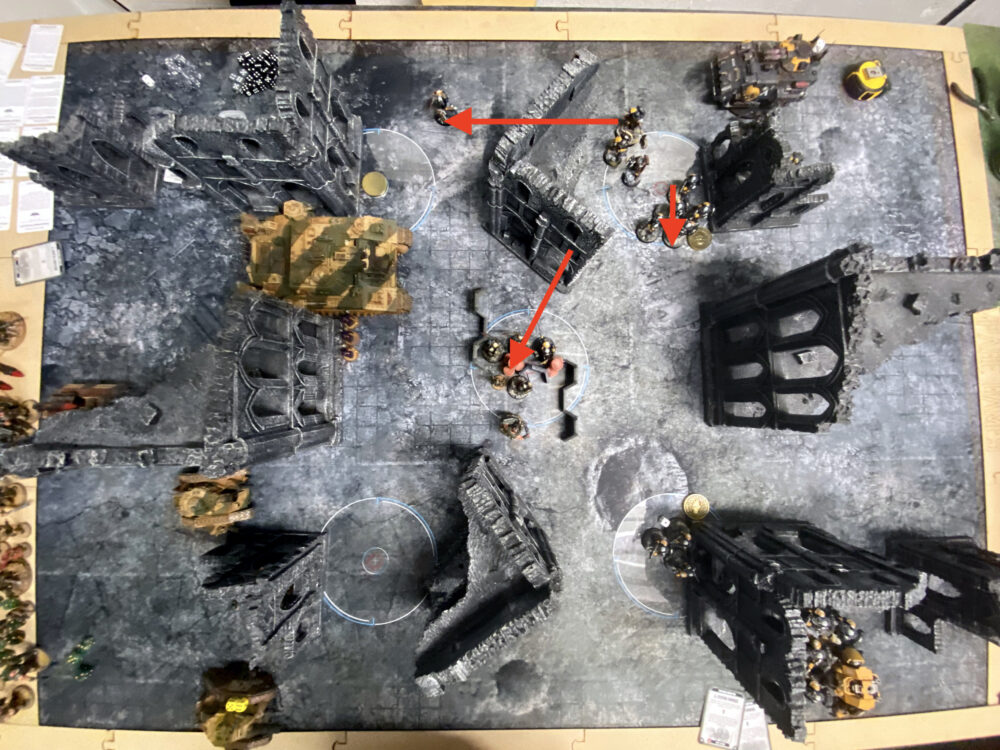 The Stormlord charged the Bladeguard, killing three – that was more than its whole shooting so far! Thanks to Crush ‘Em. 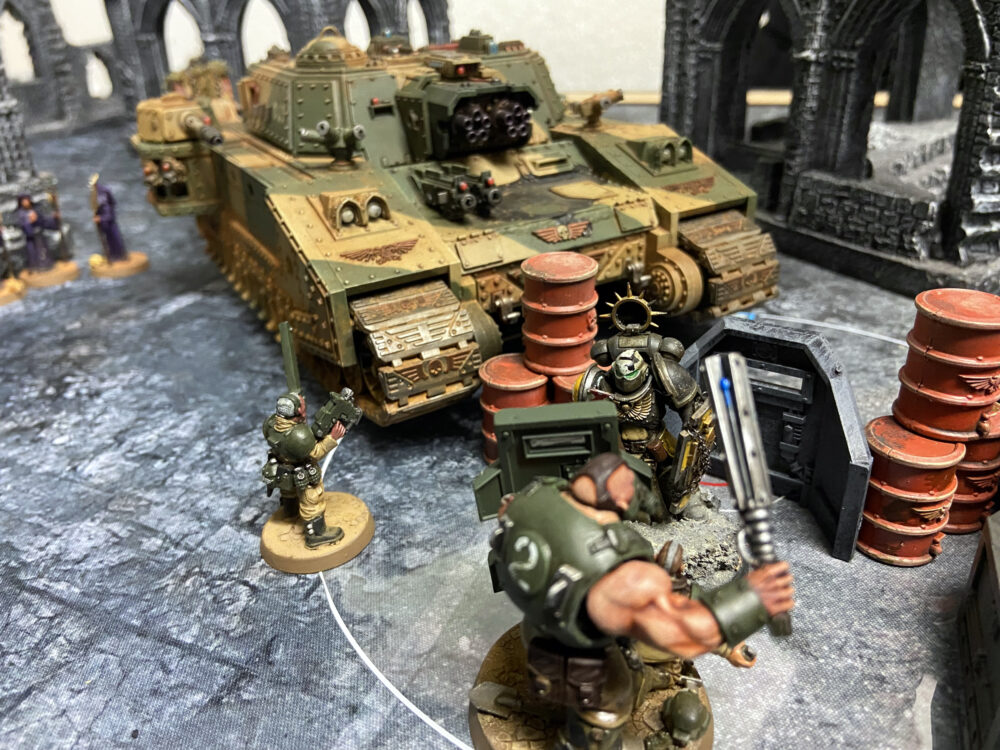 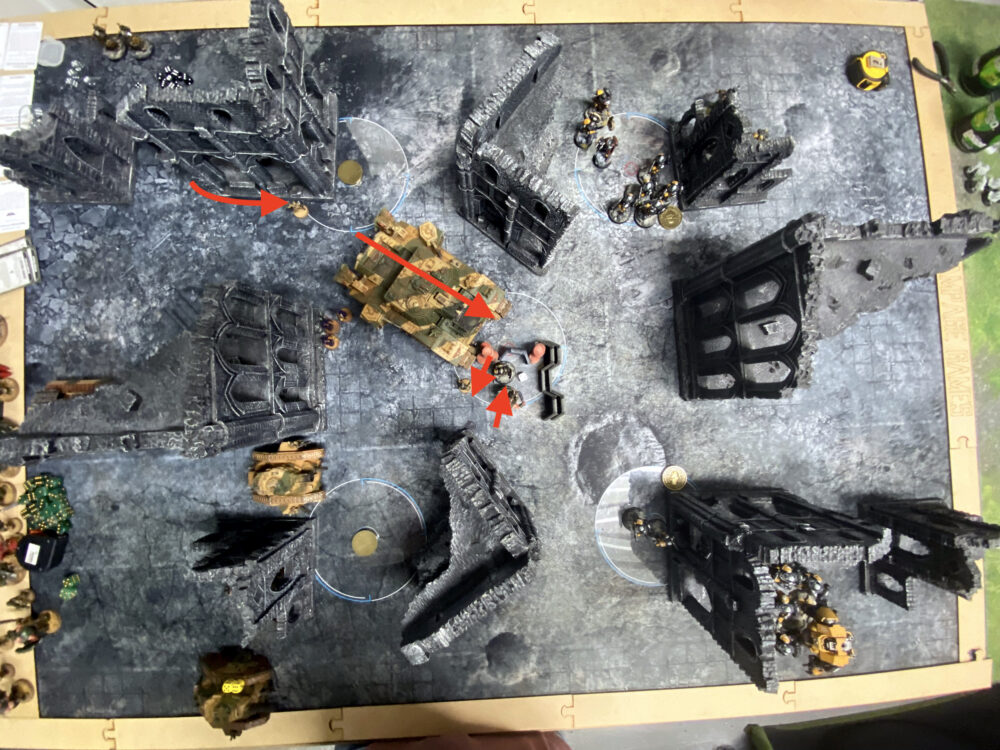 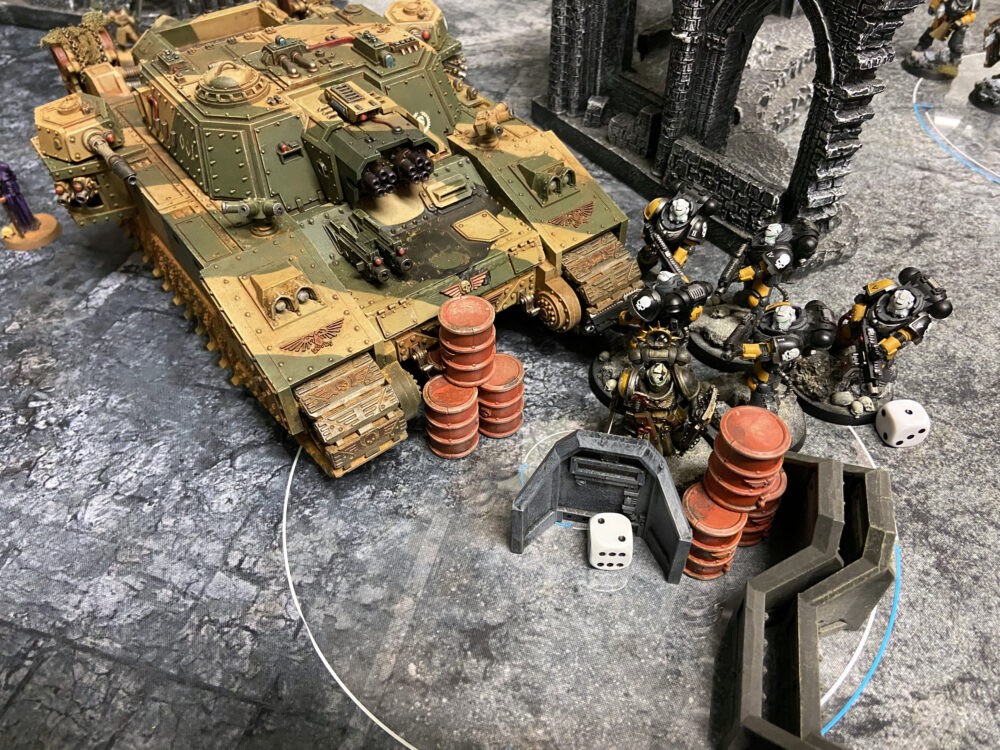 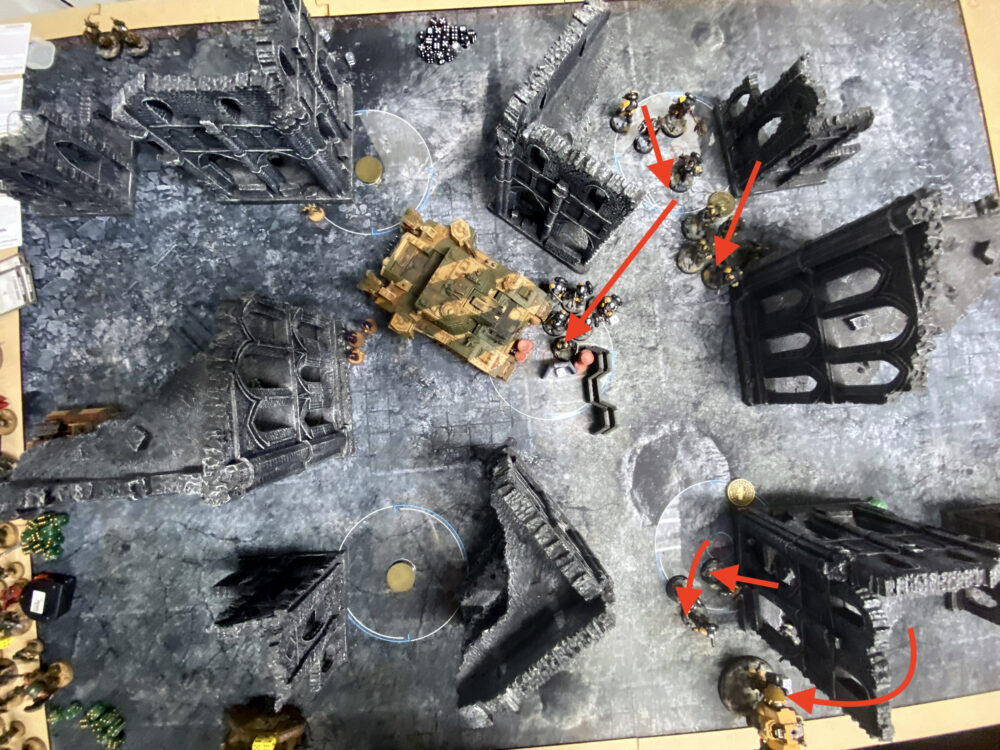 Just scoring now. But… the Stormlord was ruined this turn by the Eradicators and exploded. This gave the Iron Hands Grind Them Down this turn, but it also got me 3VP for For The Emperor.

That was nice to the end of the game; the last shot of the game was the most destructive. It killed a couple of Astropaths, my Warlord, Iron Hands Company Veterans and Intercessors.

This turned out to be closer than I was expecting. I had some awful shooting from this list again, and that felt like a really bad thing. But moving up and choosing some decent Secondaries kept my score up. 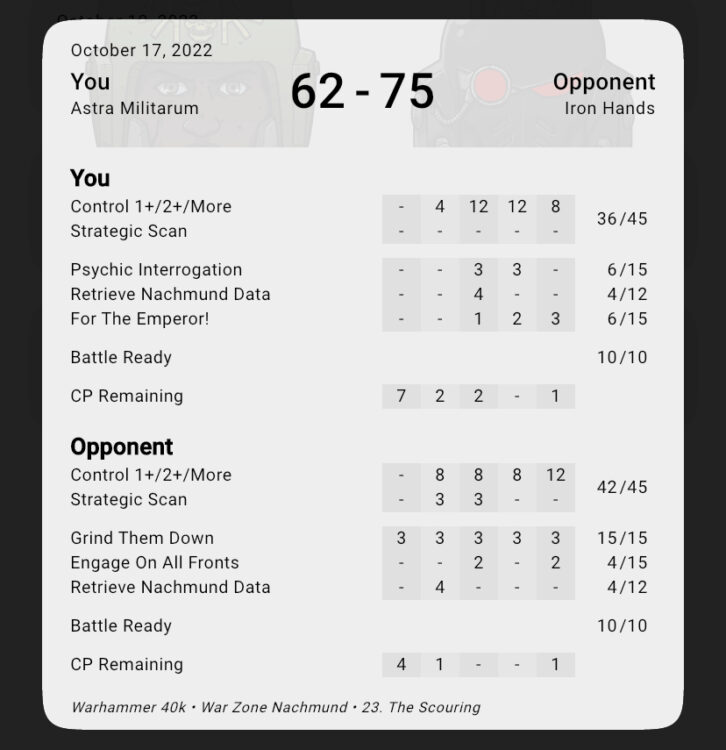