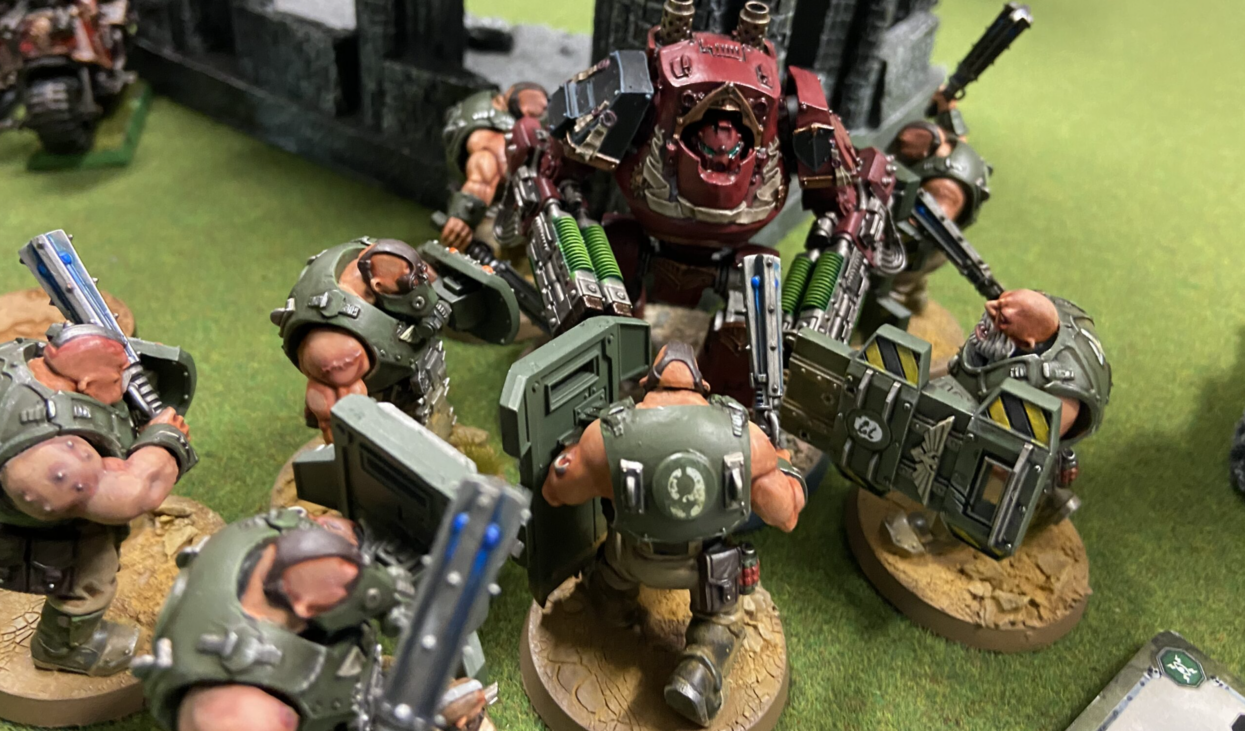 My first game of the 2022 League is underway, this is 2,000 points of Cadians Vs Alpha Legion! This game was played before Hammer of the Emperor rules.

My list can be seen here on my 2,000pts Cadian page for the League. 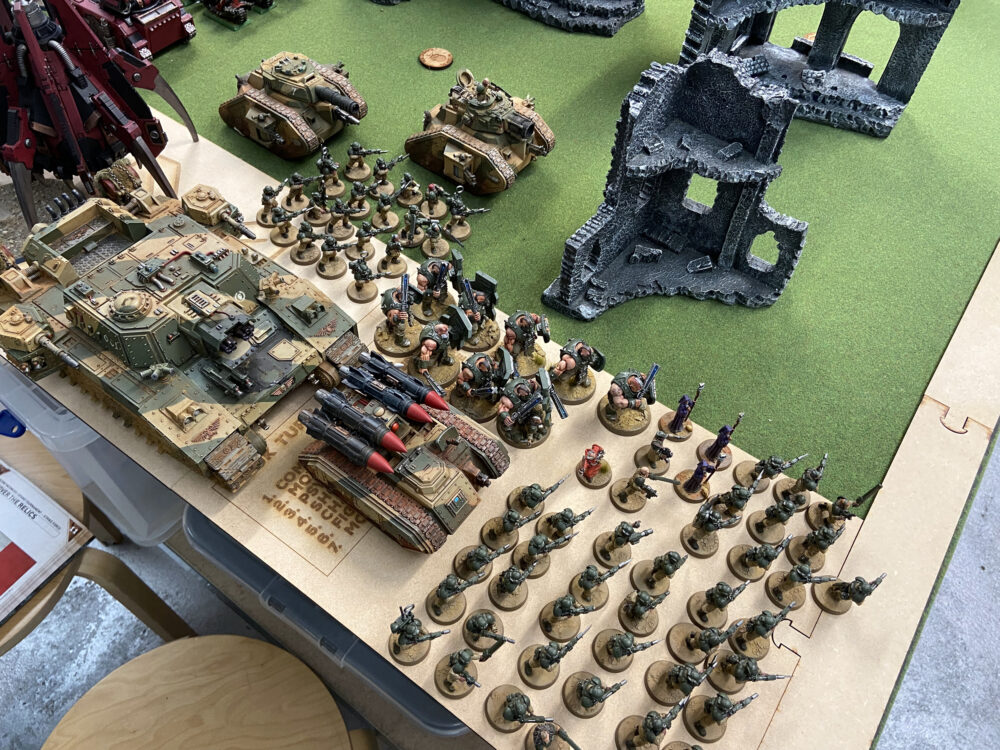 The Mission – Recover the Relics

4VP per Battle Round for each of the following;

The Mission Secondary was;

And mission rule was; 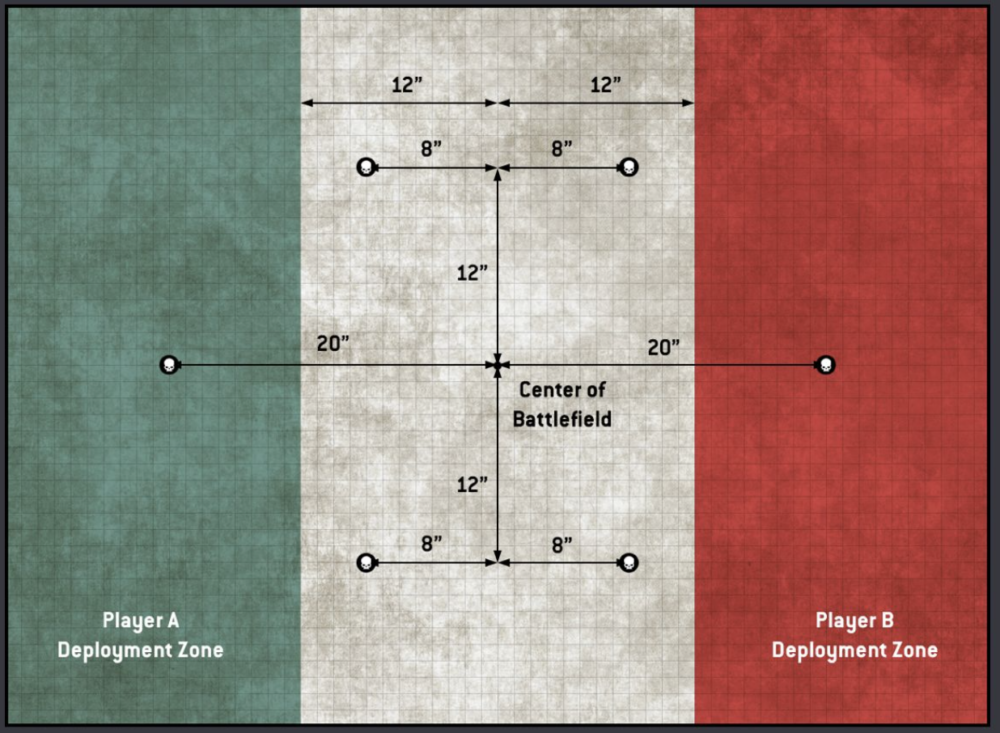 Now I know the Stormlord cannot fit, but it can. The layout we were using uses a specific tournament set-up, but we did not have that terrain so we used these oversized ruins instead. If they were not so chunky they would have been OK and the Stormlord would physically fit. So yes it does not fit, but it counted as fitting through all the gaps. Thank goodness! 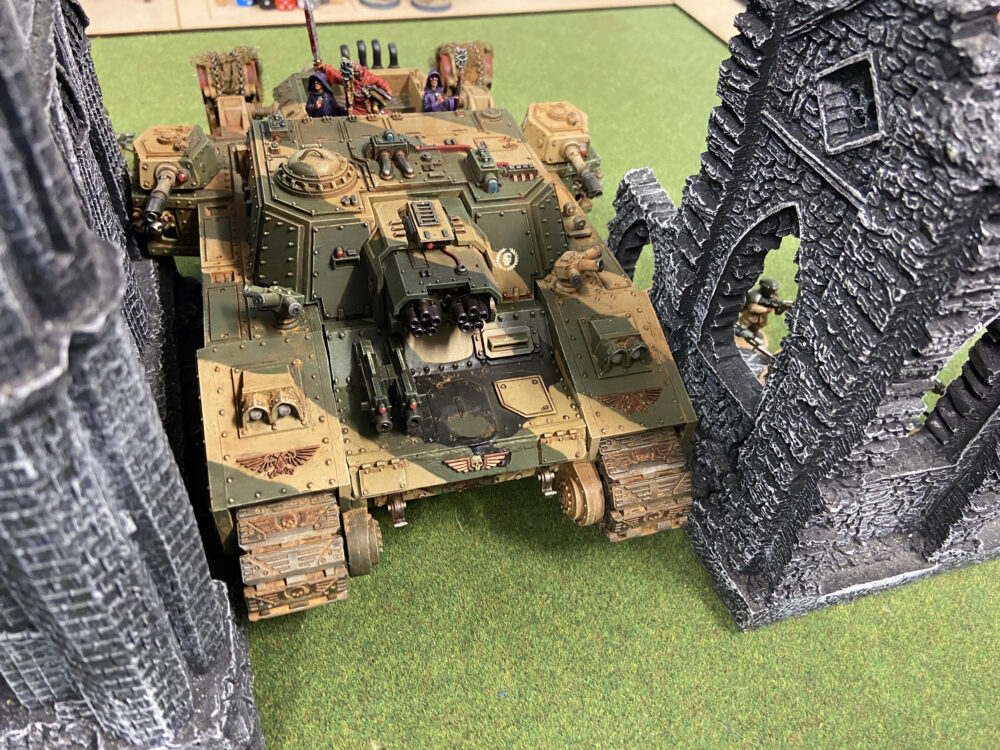 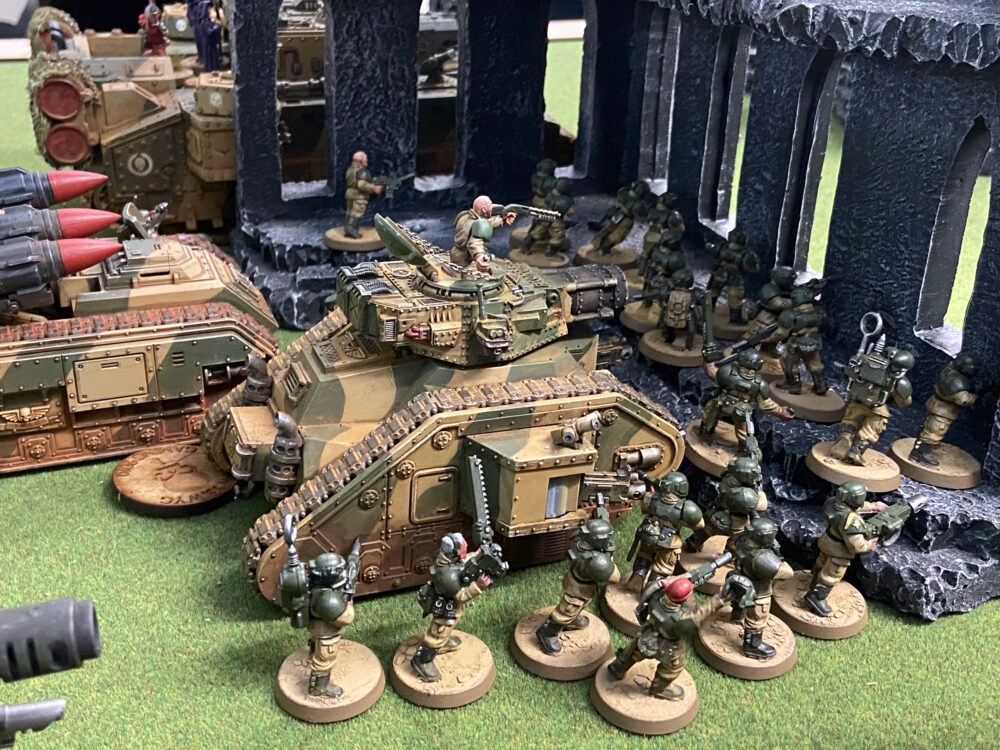 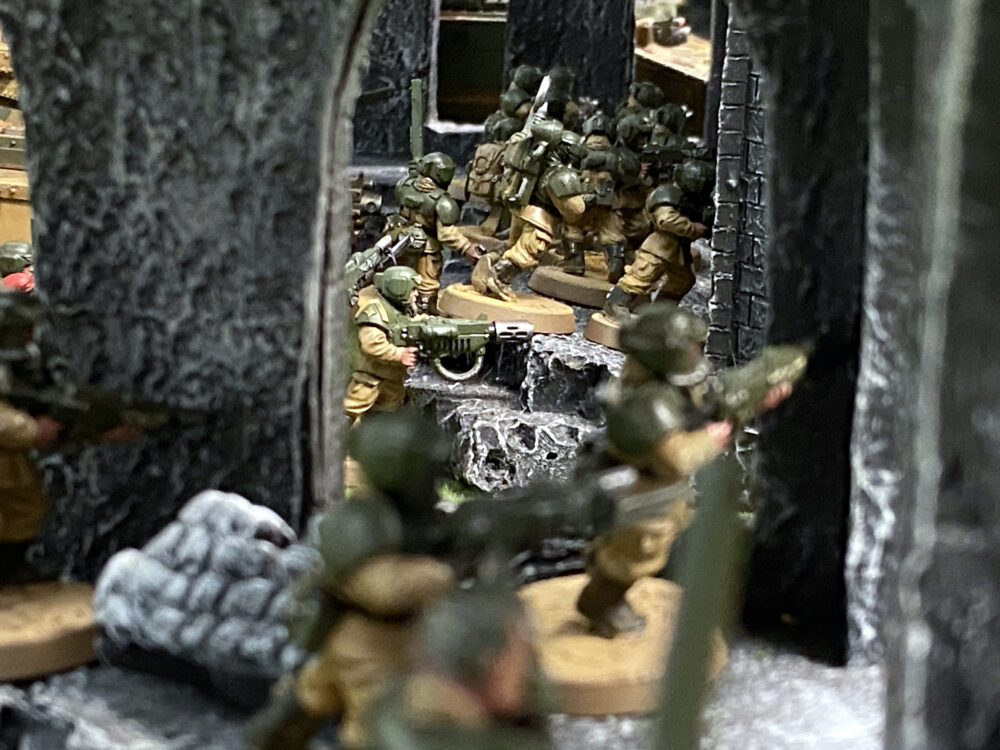 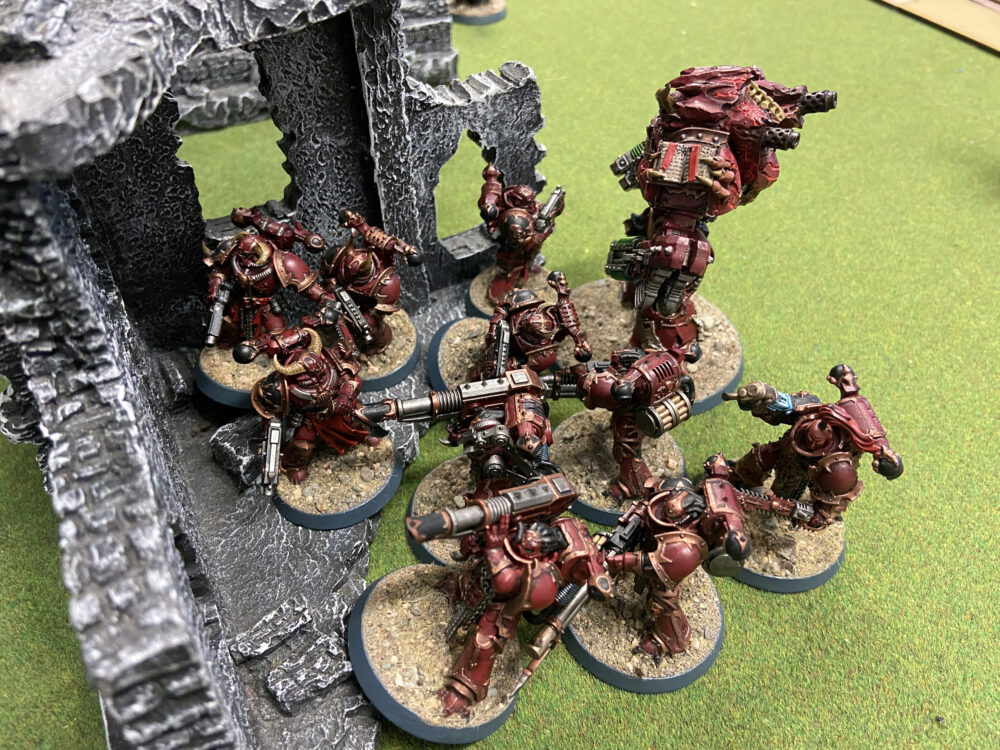 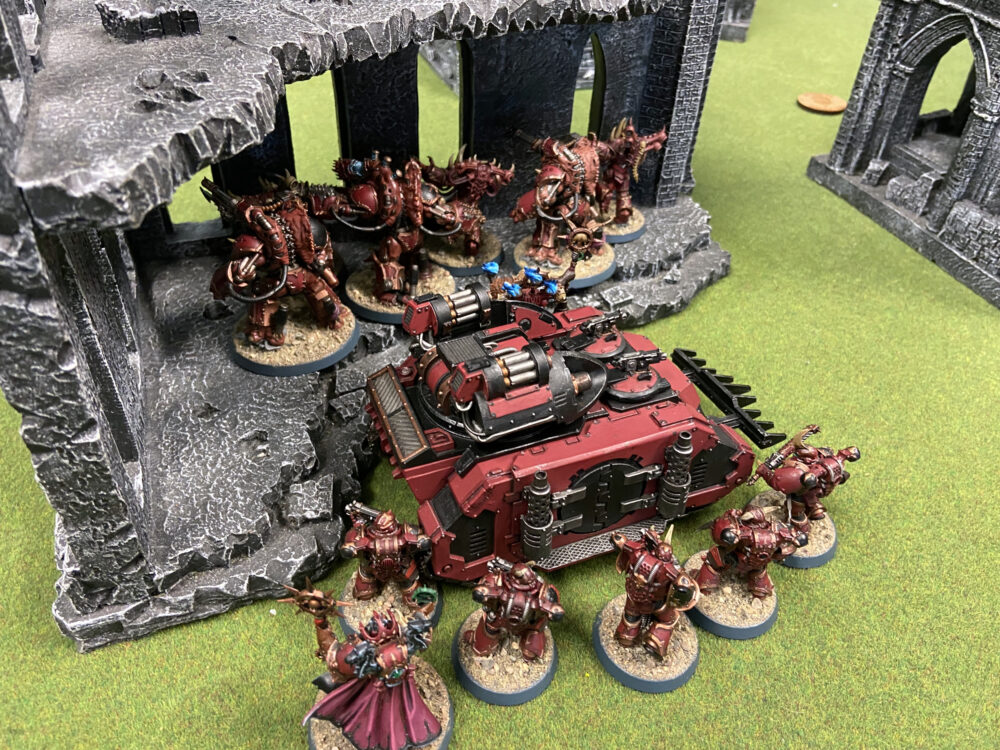 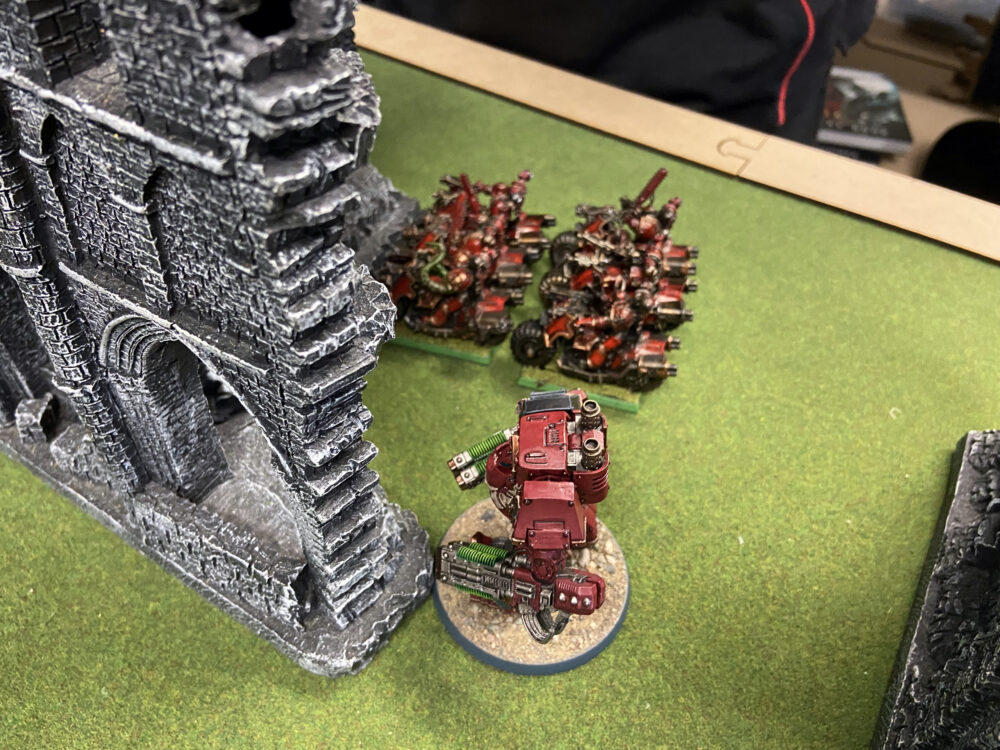 I got the first turn and did a little movement, popping two Astropaths out of the Stormlord and then giving it +1 Save and -1 to hit. The Stormlord moved up. Two units of Guardsmen moved up too, just to sneak onto those No Man’s Land Objective Markers.

My shooting phase was not good and I failed to remove any enemy units.

There were no charges.

Olly’s Movement phase was cautious, but he did come forward a little, mainly to get in range.

I lost the Stormlord in the first turn due to the Obliterators rolling well and shooting twice – this left my Bullgryns exposed – but luckily the Stormlord ate up most of the Chaos firepower and there was nothing left to start chipping away at my Bullgryns. 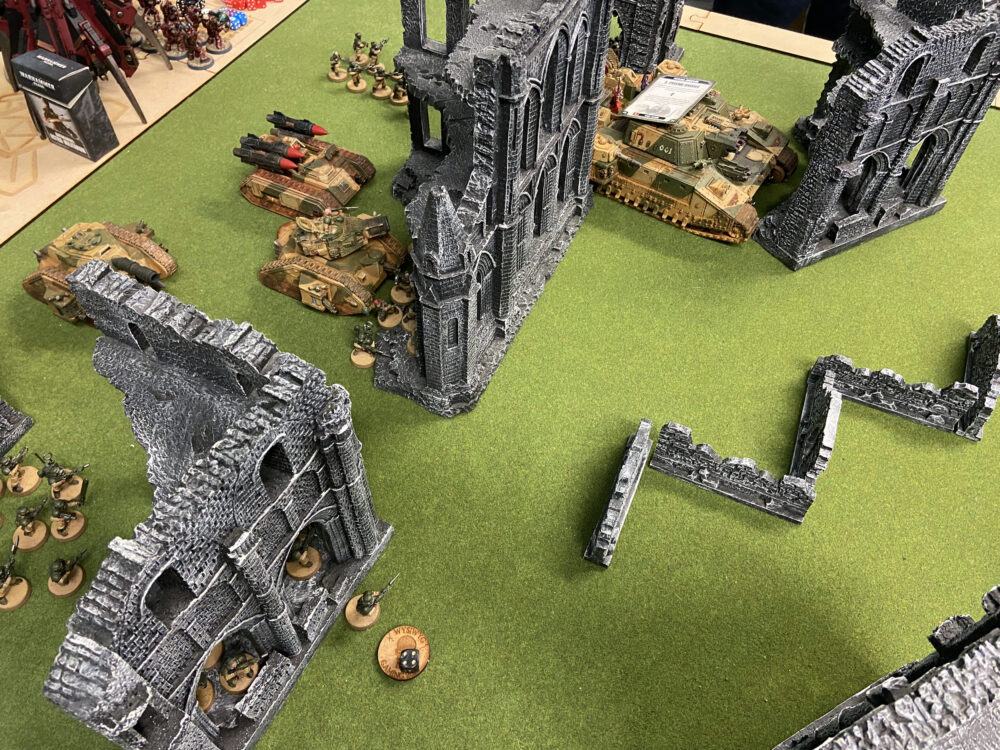 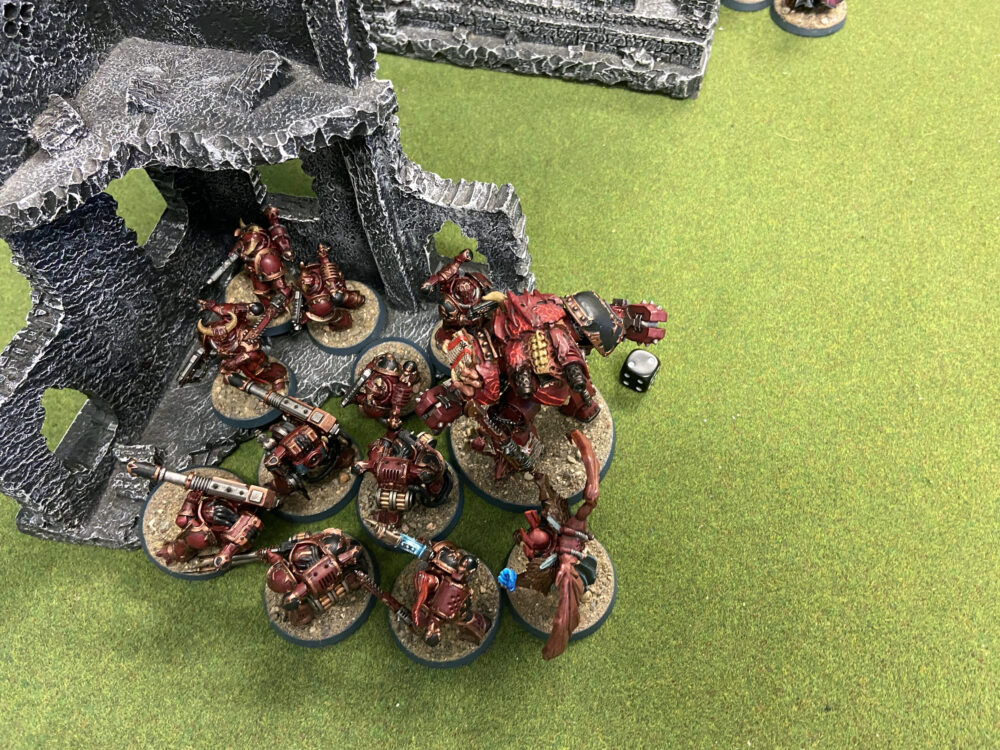 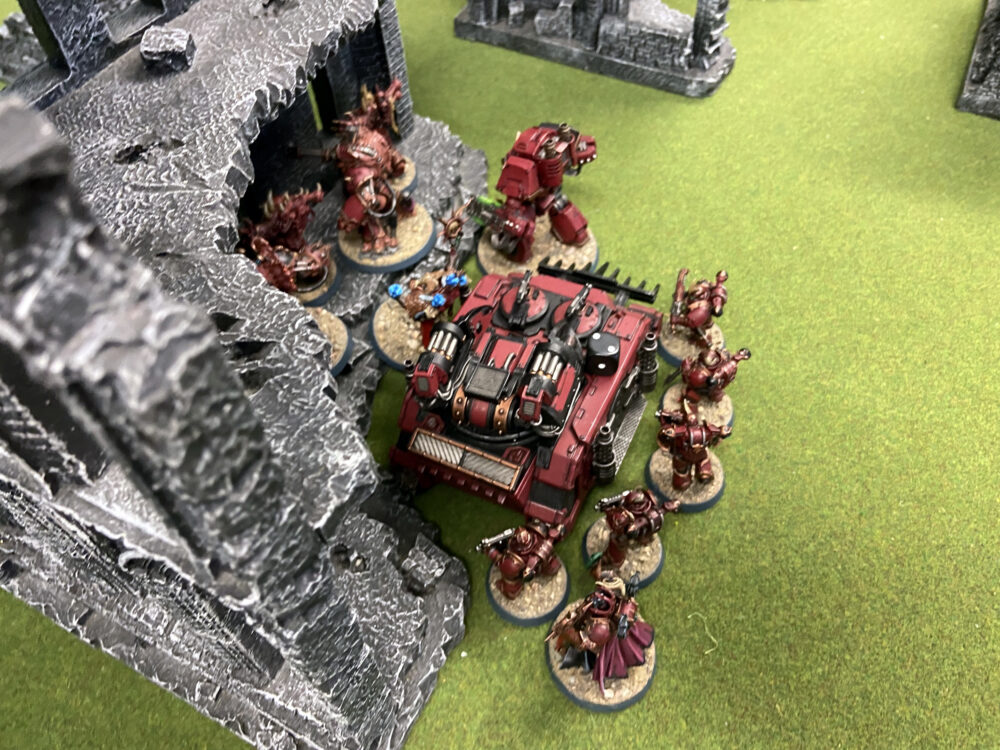 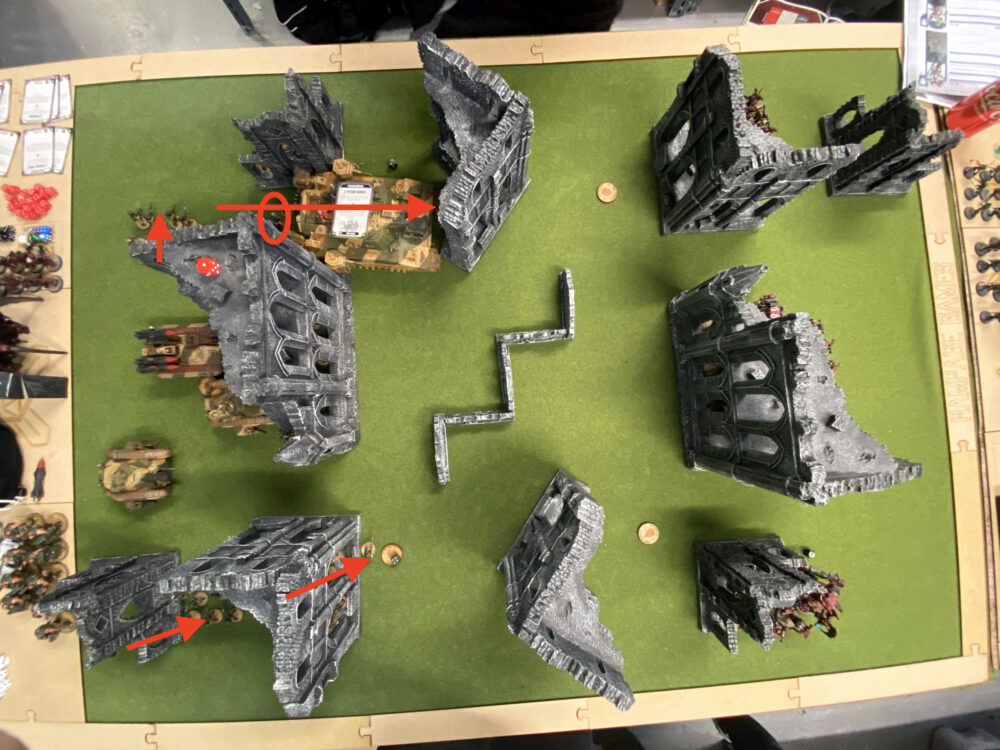 The Bullgryns went forward while the rest of my units did some re-jigging to get onto Objectives or gain line-of-sight onto enemy units. I killed all but one of the Obliterators, thank goodness. Those guys are nasty.

The Bullgryns made their charge into a Contemptor and failed to kill it. Yikes, 2 Damage vs -1 Damage is terrible.

I am pretty sure I lost two whole squads this turn from shooting and one of my Leman Russ started to take Wounds too. I lost all but 3 Bullgryns in the continuing combat after the Obliterator, Bikes and a character joined in.

The Bullgryns did intervene thought and killed 2 bikes! 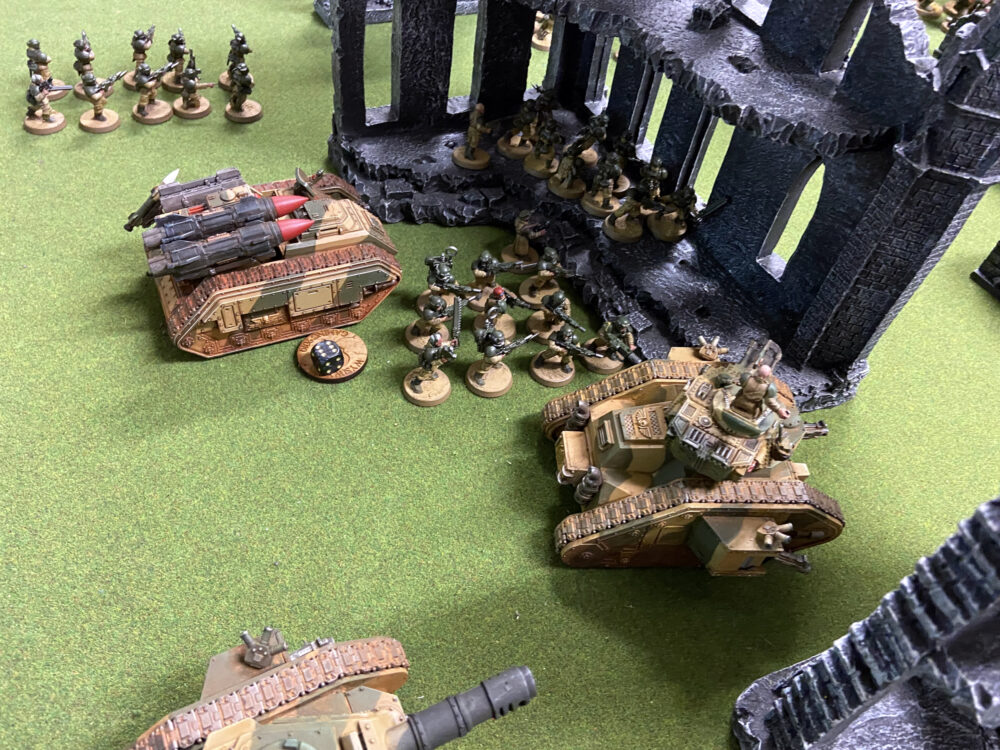 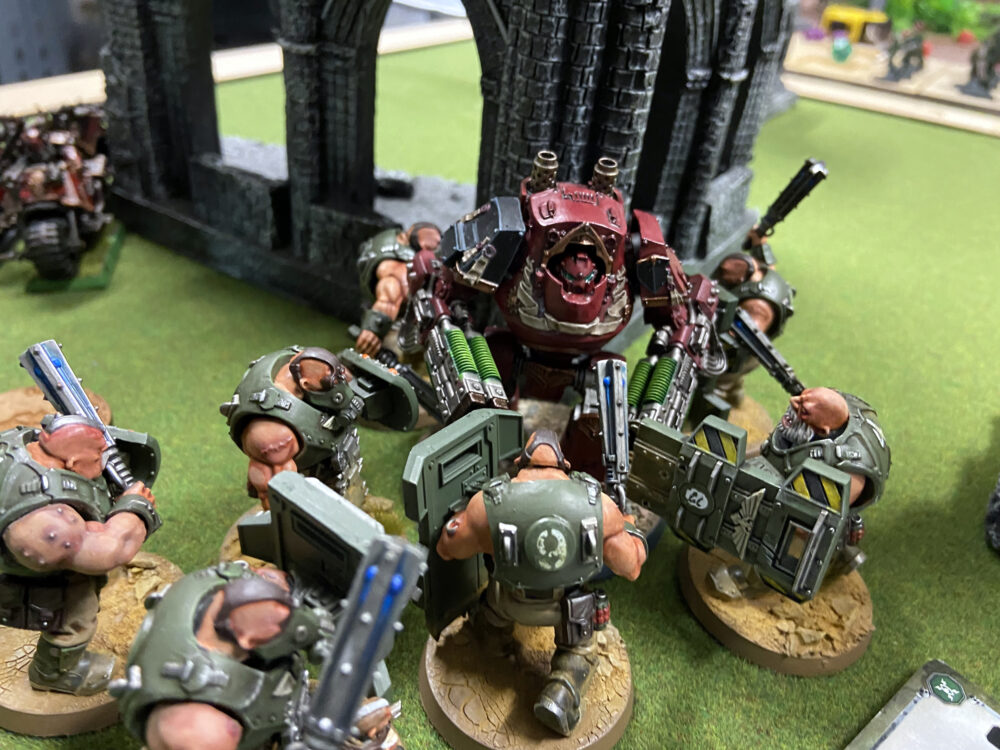 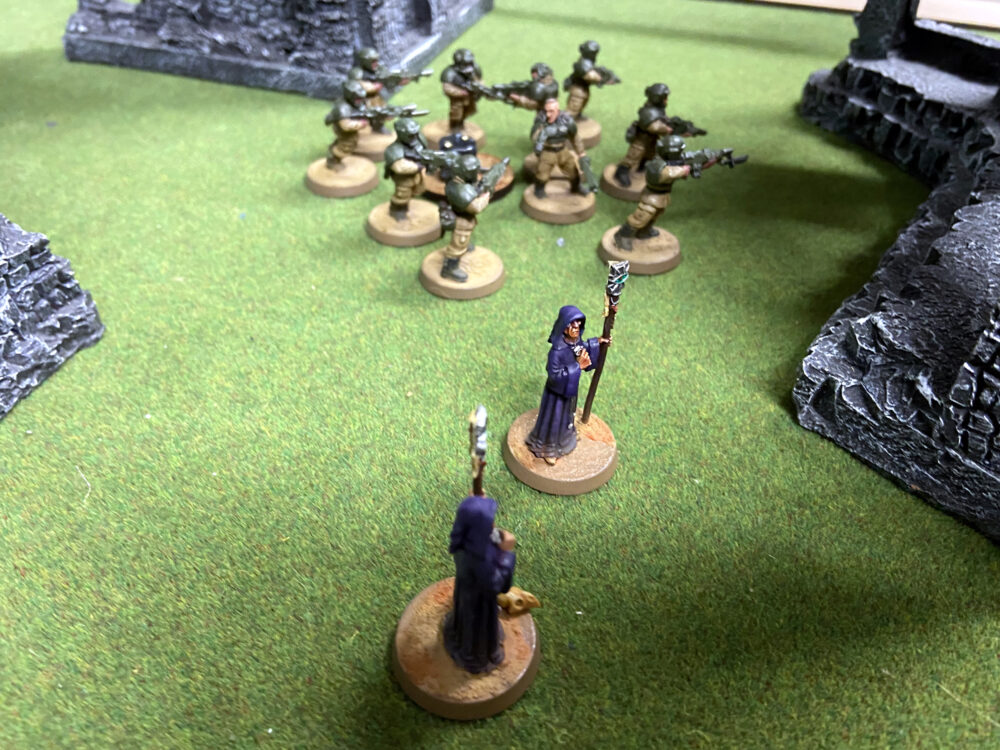 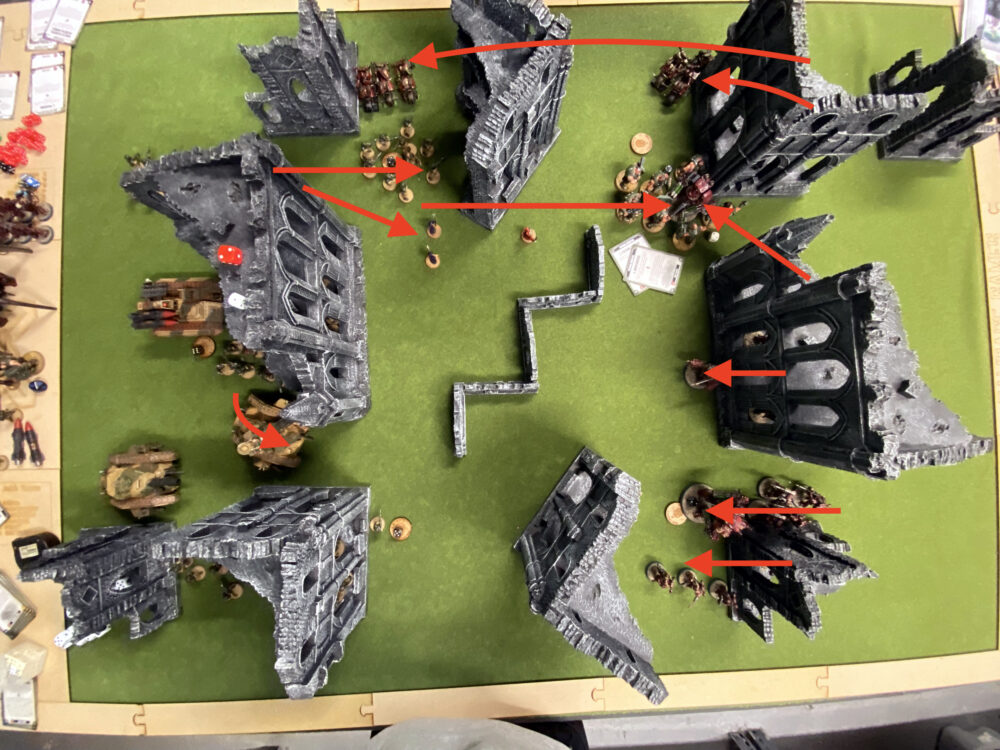 I moved the Bullgryns out of combat and into a ruined building – to try and save them for another turn.

I finished off the Contemptor the Bullgryns had made a start on this turn via shooting. I think I killed the other one too this turn. It is hard to remember!

The Dreadclaw arrived this turn, which placed Marines on my left flank, they started to eat into my infantry.

I lost the three remaining Bullgryns to a plethora of psychic power Mortal Wounds.

The unit of 3 Bikes and unit of 1 Bike was now zipping around trying to get to my Infantry and Objectives.

The fast-moving Chaos Lord moved up and into my forward most Leman Russ – amazingly it survived on 3 Wounds. 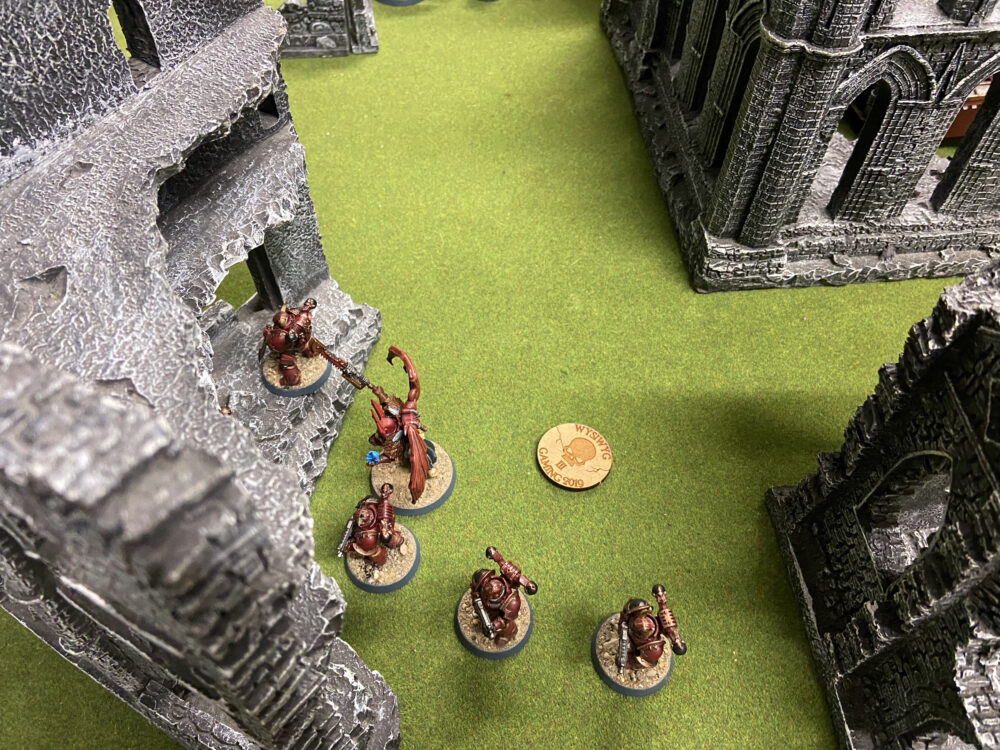 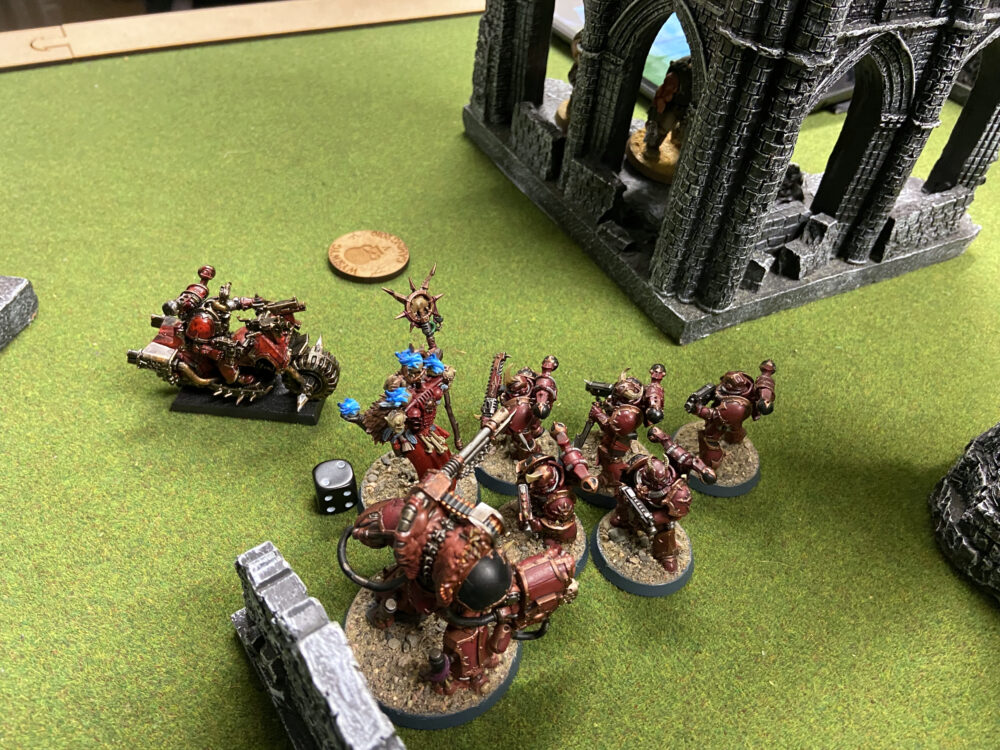 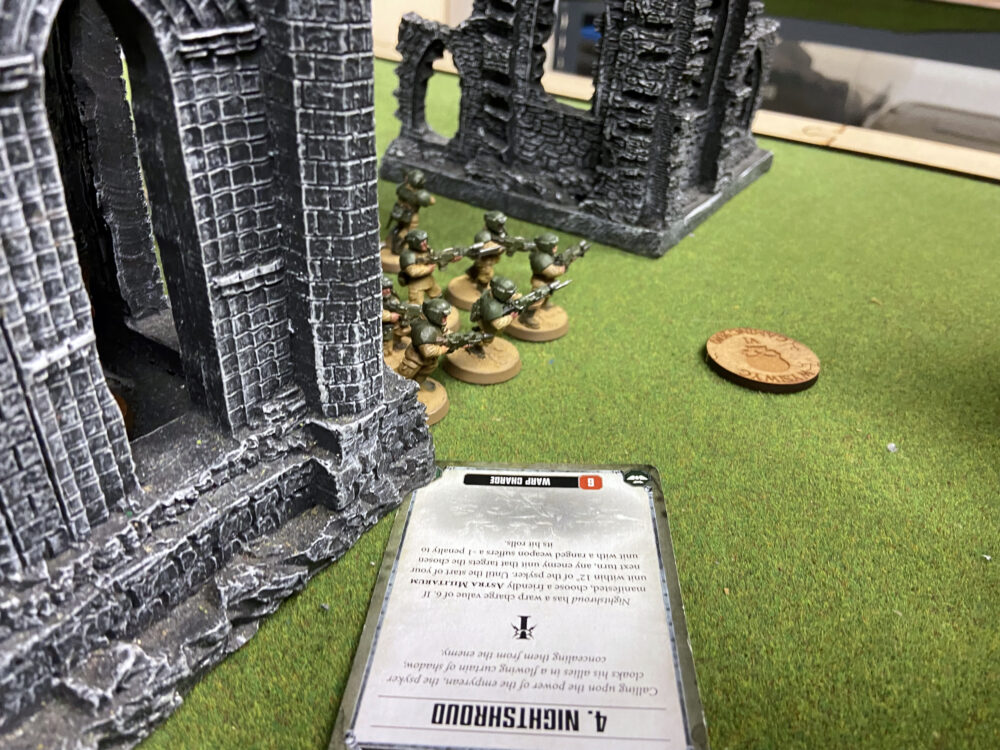 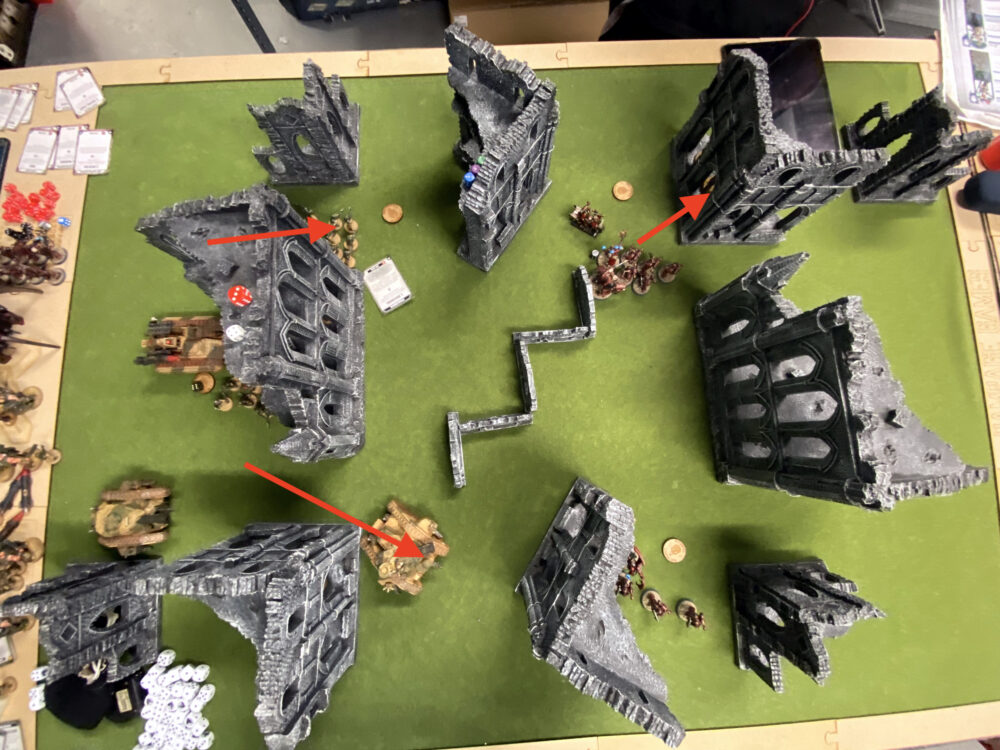 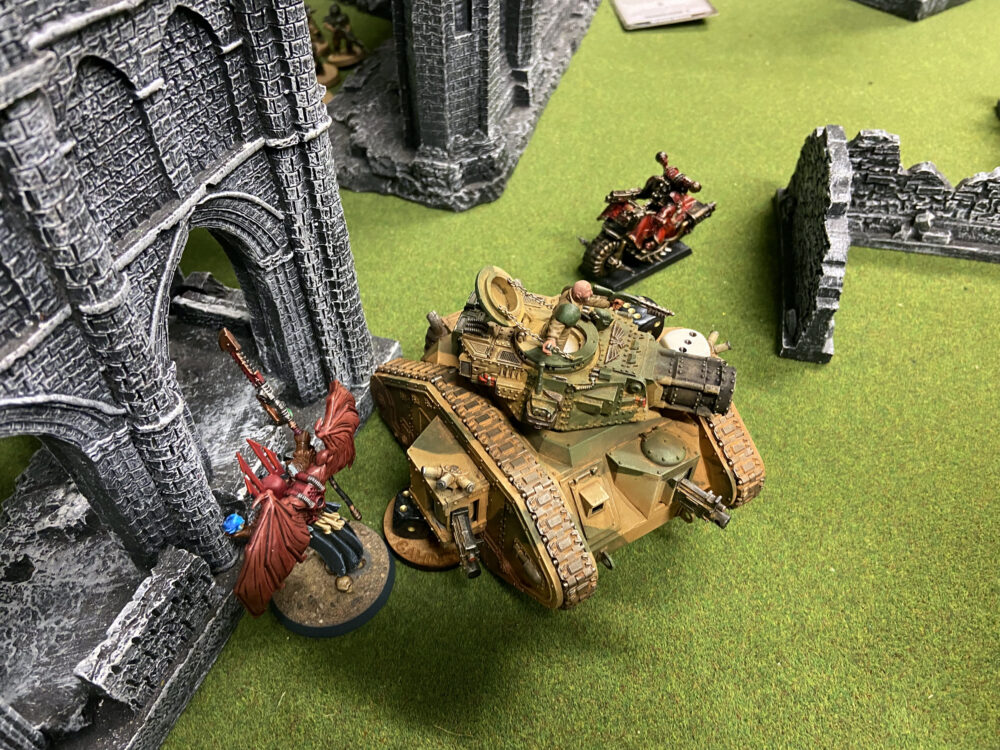 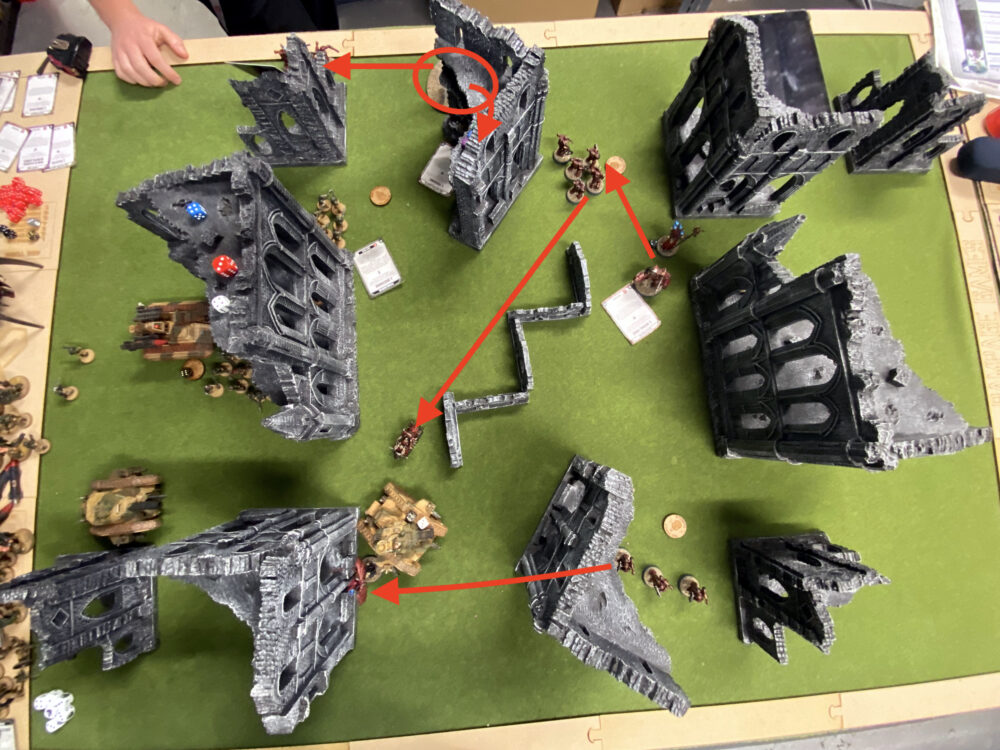 The Lasguns came out fighting for me in this turn and wiped out three Bikes thanks to First Rank Fire, Second Rank Fire and Laurels of Command giving them re-roll all Hits.

I removed the last Obliterator and was trying to mope up CSMs as best I could, but with them right near me, it was tough. Plus the Chaos Lord was on top of one of my Leman Russ.

The Chaos forces continued their squeeze on my forces. Marines moved in and deleted infantry squads with ease. 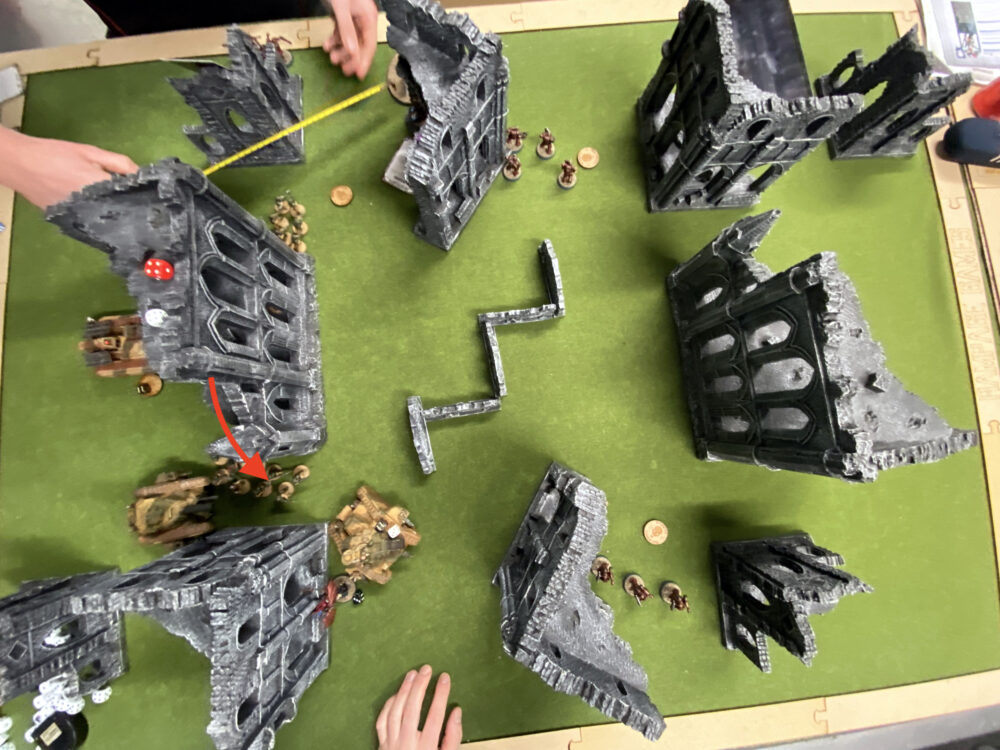 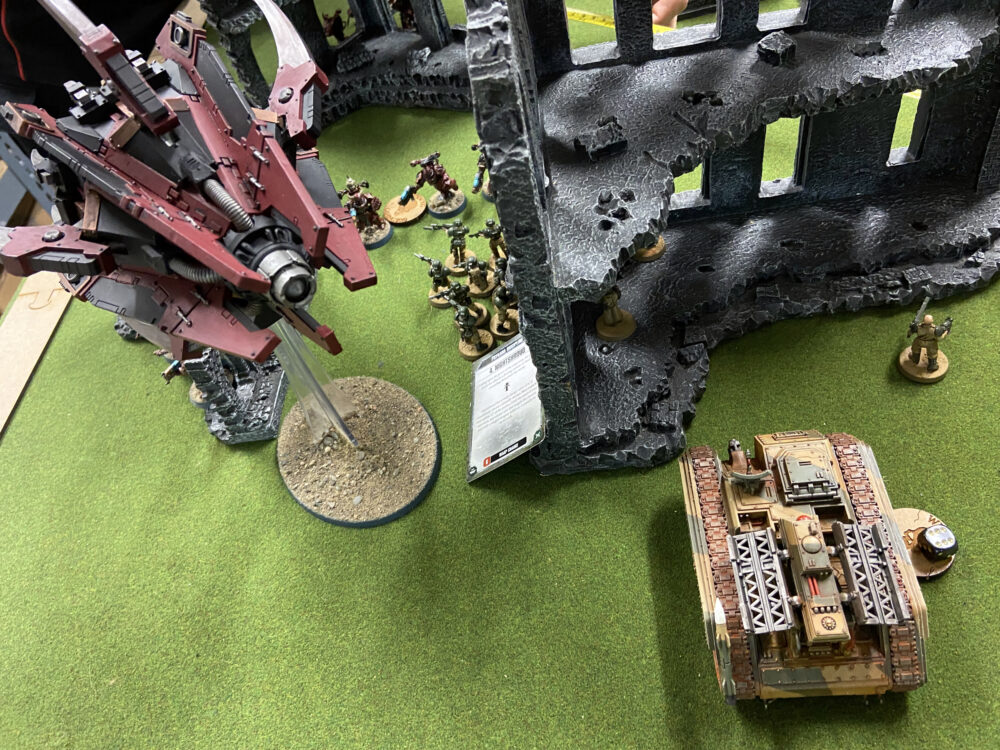 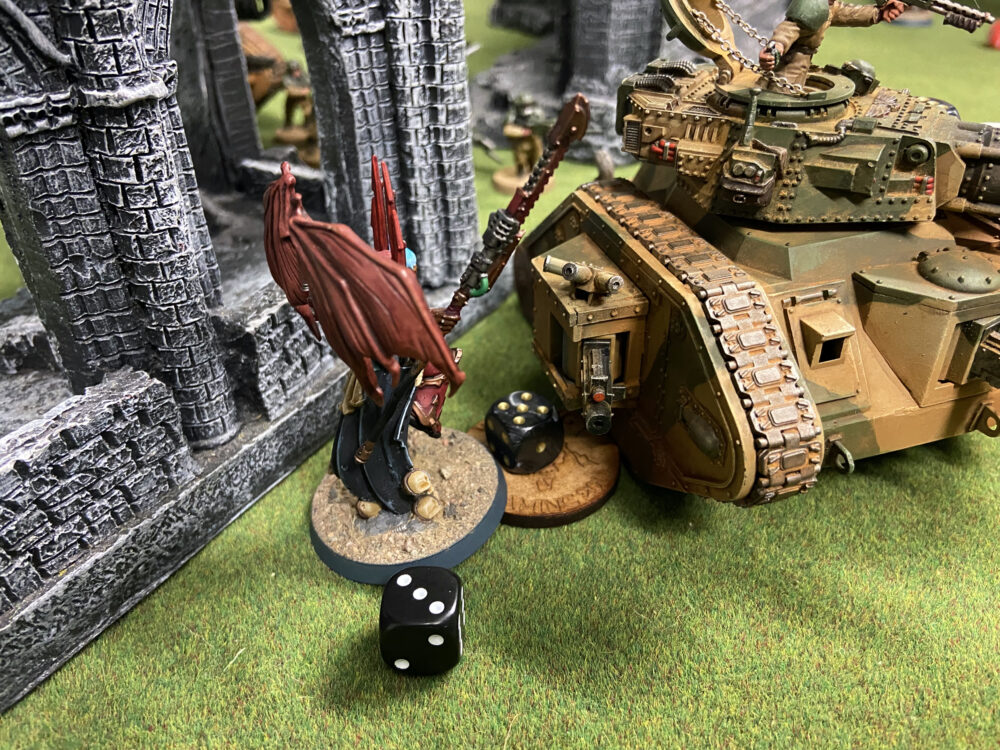 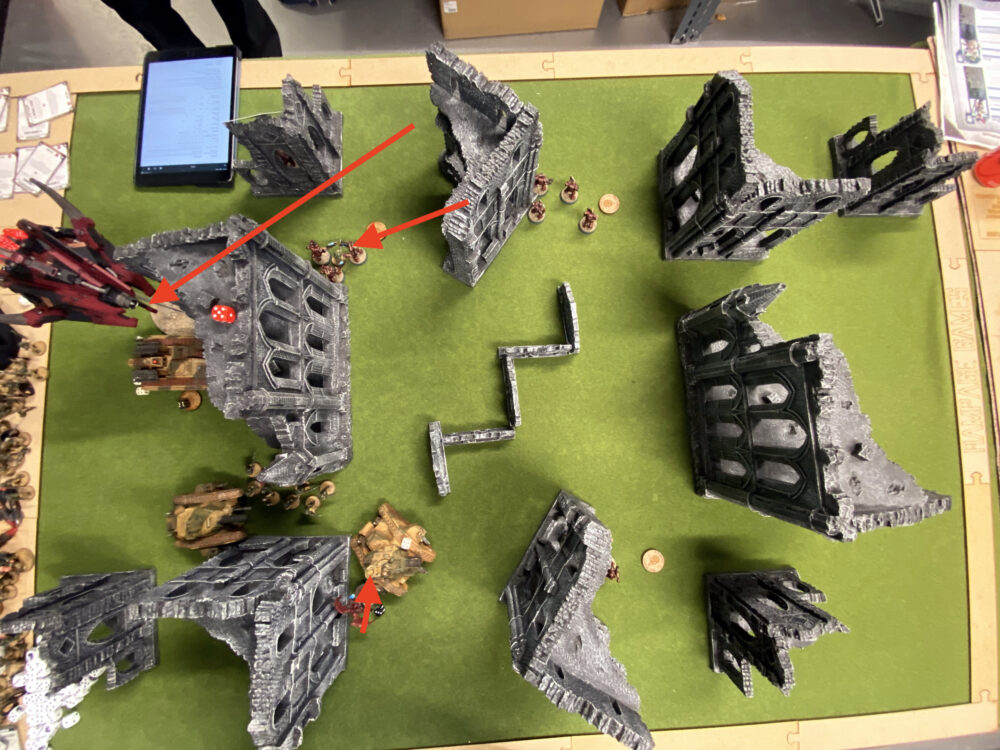 Now we just went through the motions of scoring I think. It was hard to remember so long after the game, it was over a month ago when I am writing this.

A respectable score from the Cadians. My next game is vs Lance’s Blood Angels in late May – he battered the Iron Hands 83 – 52 so it will be interesting to see how my 5-year-old Codex holds up… but this time I will have Hammer of the Emperor! 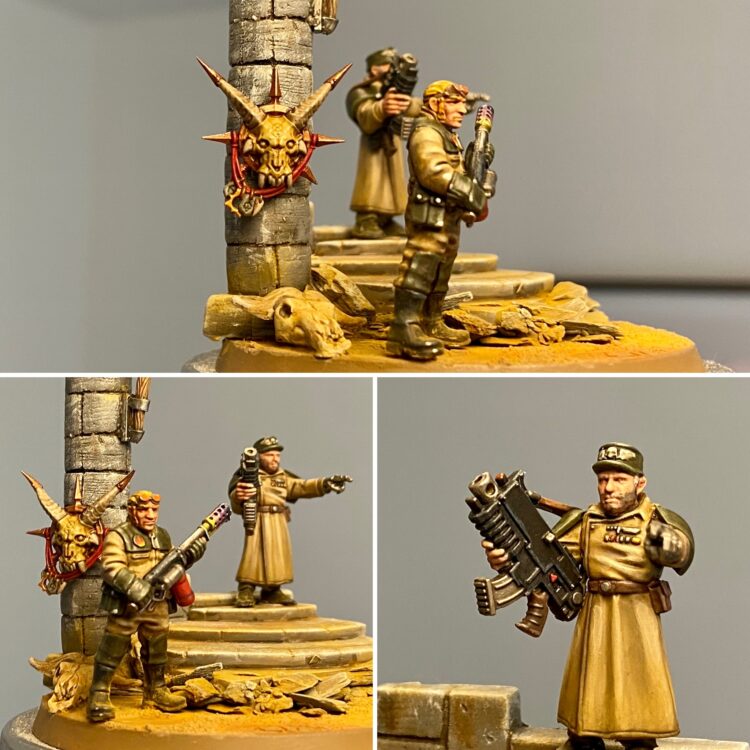 My Warlord with the Alpha Legion Trophy

All games have now been played for April and I am placed 7th out of 10. 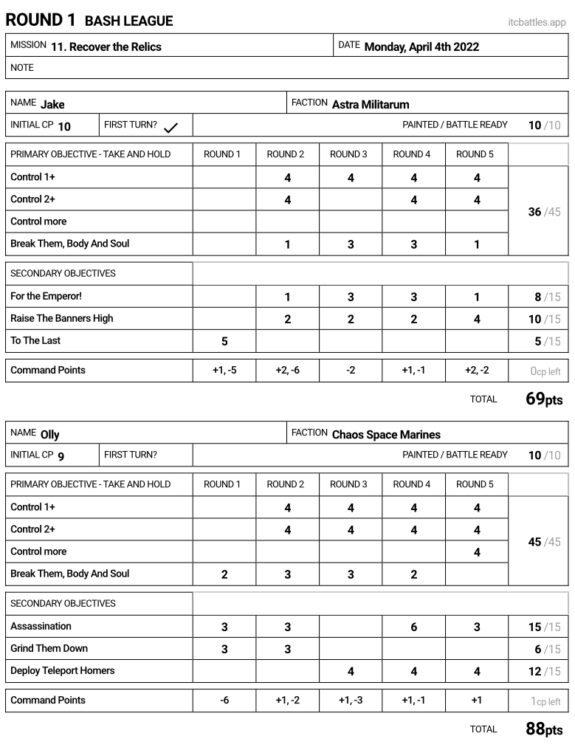