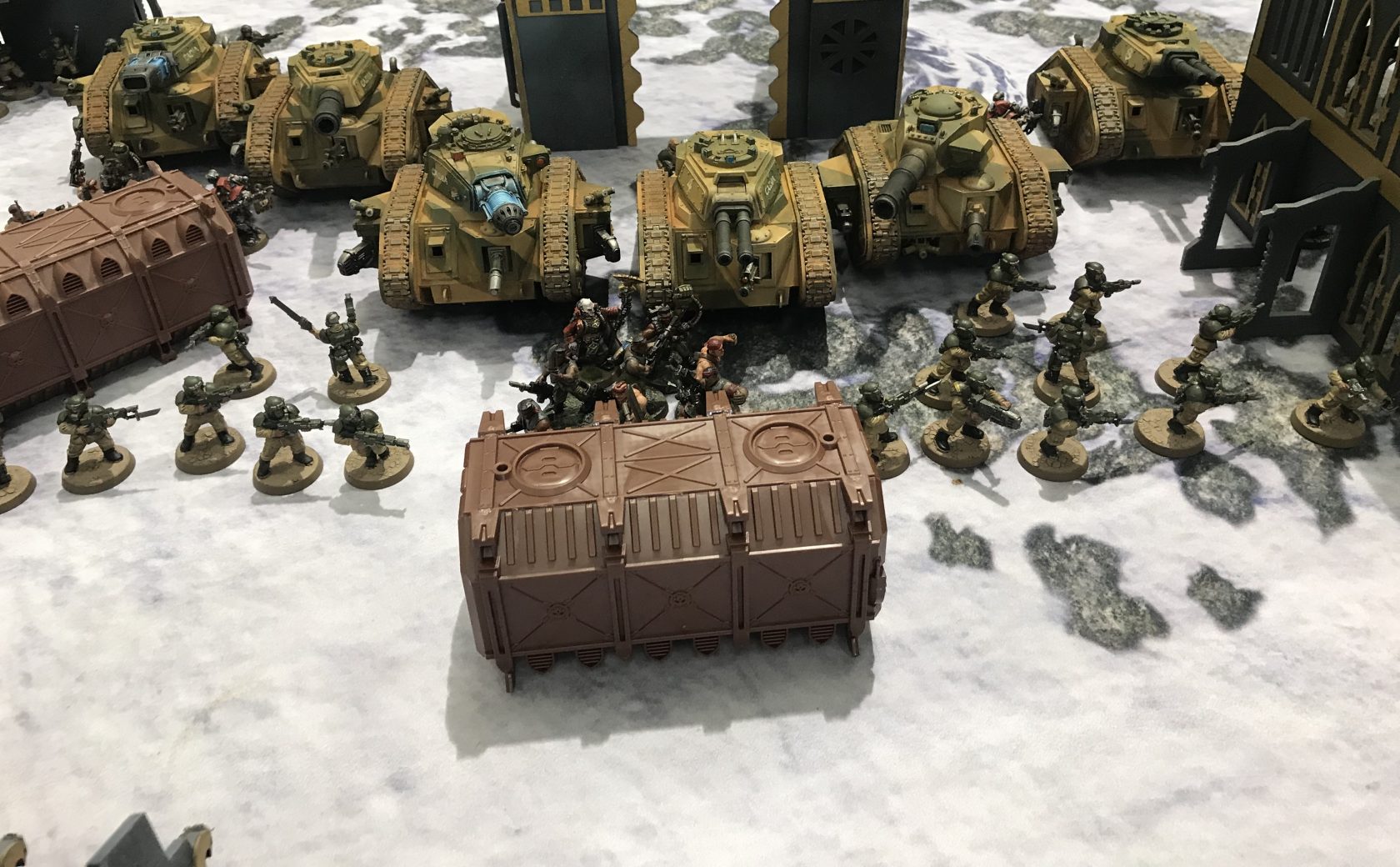 Will this help me finally beat the Death Guard?

I am now at seven losses to one win against Mark’s Death Guard. This is a fair old battering and I’m set on changing this! Sorry, Mark, I need to be beating The Death Guard! As this post is published (automatically) I am playing the Death Guard at Boards & Swords. Check out my Instagram for the latest pics!

This battle is now done and written up!

I have been looking back over my lists against the Death Guard – looking at Mark’s lists too. And there a couple of glaring issues with my lists now I look at them against Mark’s.

If this doesn’t work – then I am at a loss as to how to take on the Death Guard. This list is so different from anything I have taken before it should be a big performance improvement. I took the 7 Leman Russ against Ad Mech and Knights – and they did really well there. Plus during that game, they were shooting at the Doomsday Device and not the enemy for some of the time. So some of their efforts were not even directed at the enemy. During that game, I still managed to destroy many enemy vehicles; 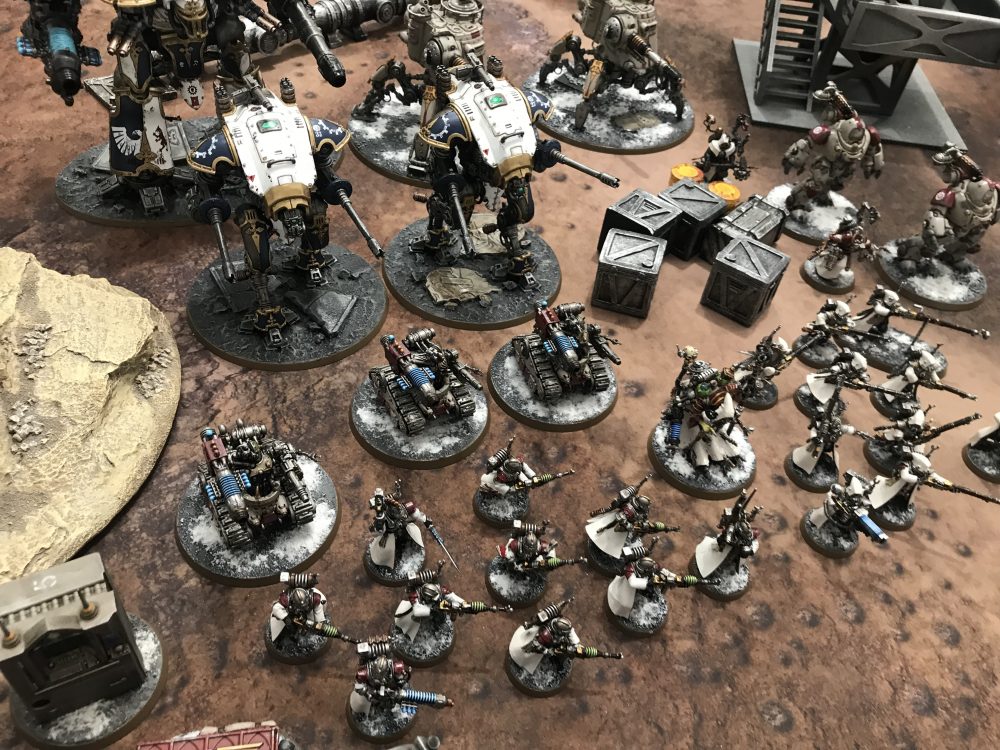 It seems Games Workshop are against me! Just before this game, they released rules that give the traitorous Space Marines and extra Attack on the charge! For a five-man Plague Marine Squad that might be the difference between wiping out an Infantry Squad and not.

I have identified three. On their own, they might not be too bad. But together their effects compound into a lacklustre performance against the Death Guard. And the Death Guard take no prisoners, they do what they need to do very well.

My lists contain dead weight. Not always a lot, but it’s there. The Death Guard armies I have been facing contain zero dead weight.

My Vox-Casters are dead weight, as are my Ratlings and Vindicare Assassin. And to some extent the Wyverns are dead weight – against Cultists and Pox Walkers, the Wyverns are great. But if I’m not facing those units (or once they’re killed) a Wyvern has a hard time killing one Plague Marine. That sounds ridiculous but it is true.

From 4D6 shots you can roll badly and get 8 shots, that is 4 hits and then 1 wound – maybe. If the wound is then saved or its resisted via Disgustingly Resilient – which it usually is – then the Wyvern has done nothing for you.

My move to playing only painted hasn’t helped my lists. I’ve been limited with what I can take. The only time I beat the Death Guard was when I was playing with unpainted models and I took five unfinished Leman Russ and three unfinished Scout Sentinels.

This decision is limiting the lists I can take. It is partly why I kept bringing the two Wyverns and two Basilisks. They’re painted. There isn’t a quick fix for this issue though. But this was a great decision to make, playing painted has meant I have completed more points of models in 2019 than all other years (four) added up! 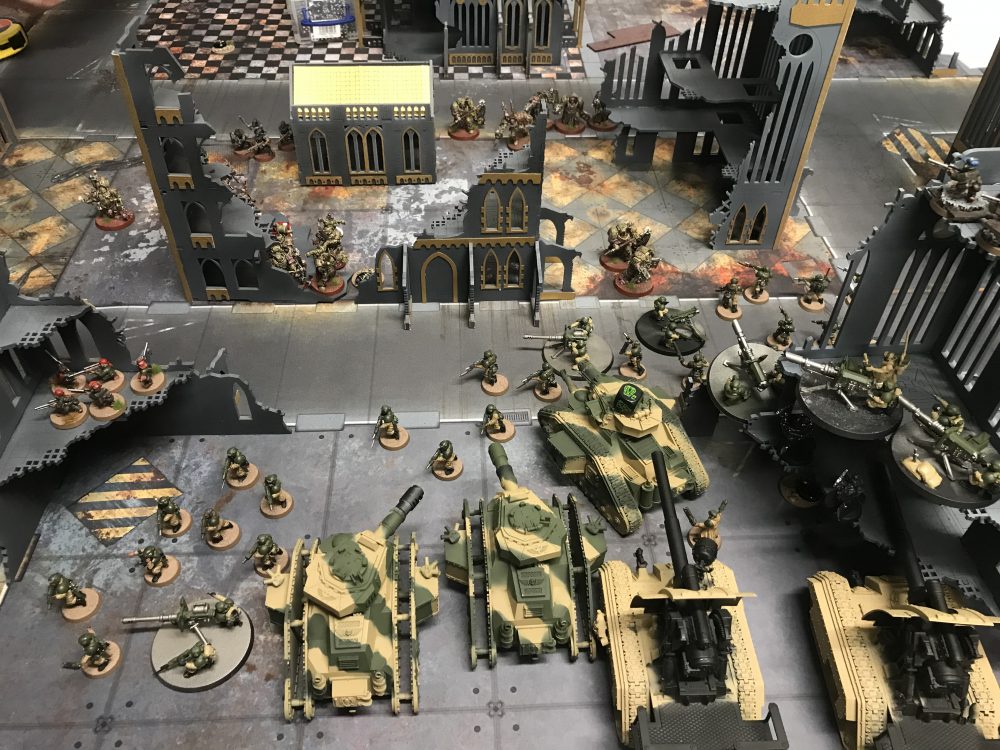 I’ve noticed a big difference in how the Guard and the Death Guard Play. If the Death Guard want to destroy one of my tanks, they point and shoot. The Foul Blightspawn that has 3 Damage has done this a lot. The Armigers and Plasma Gun Terminators also strip wounds from tanks quickly.

The same for removing my Guardsmen. Want a Guardsman squad removing? No problem! One volley of Bolters and then a failed Morale test will see to that.

The Astra Militarum cannot do this with the models I have. If I want a Plague Burst Crawler dead I can fire everything at it and not kill it. Granted it’s Toughness 8, but I think the point is clear. Basilisks are too wishy-washy, Wyverns simply can’t, the Malcador Defender does not have the firepower and Guardsmen with Melta Guns and Plasma Guns are quickly killed, etc.

If I want something dead I have to throw about three times the firepower into it that the Death Guard does. This is to counter my BS4, random number of shots, their high Toughness and Disgusting Resilient.

The more I think about this the more it makes sense to do, without question;

If Cultists are closest then I’ll fire all the anti-infantry weaponry I can. If that seeing clear then out then move into heavier weaponry until they are gone.

If a vehicle is closest then I’ll fire all my hard-hitting weaponry first and save my anti-infantry weapons until the vehicle is dead and something more infantry presents itself as the closest unit.

An exception to this would be snipers shooting characters and perhaps needing to remove Armigers from the backfield with long-range Battle Cannon fire.

The reason this makes sense most of the time is that the Death Guard excels at shorter ranges.

If Rapid Fire weaponry can be shut down before it has a chance to get to into optimal range then I will be helping my chances a lot. Allowing such weaponry to get into half range doubles their effectiveness and therefore doubles the number of dead Cadians.

If this approach reduces the killing power of some of the enemy by 50% then that’ll help a lot. Rather than focusing on other units that are further away. 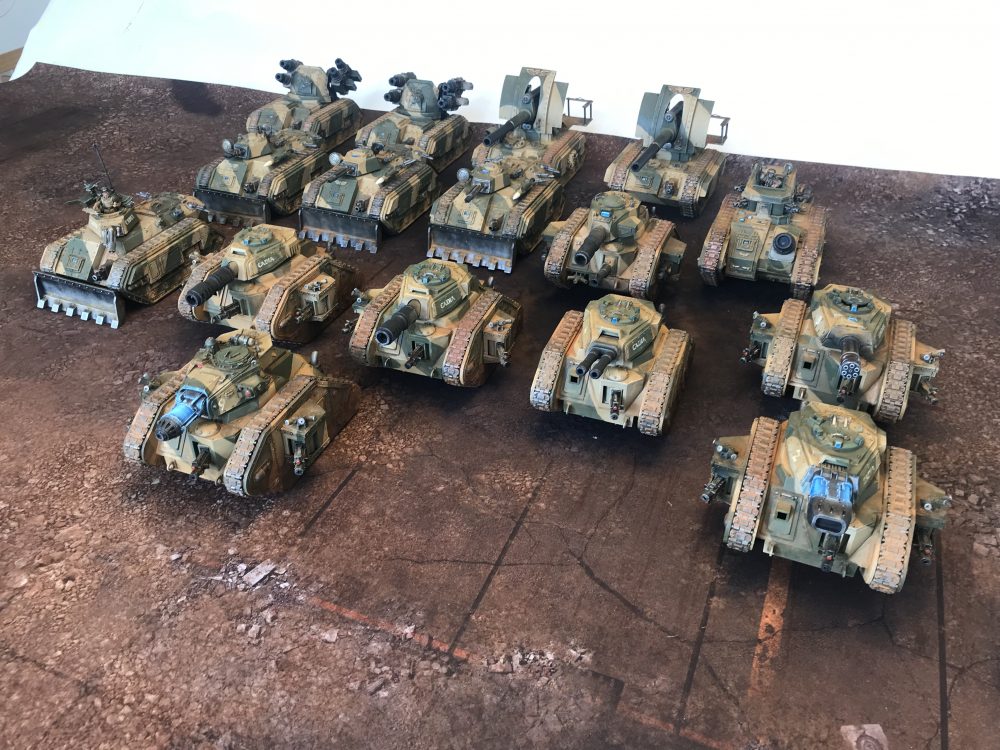 Unfortunately, there is no quick fix for my issues and beating the Death Guard. Playing painted means I can’t just dump a Baneblade and a Knight on the table. I actually have to paint them first. But I do now have 7 Cadian Leman Russ to hand.

For my next game against the Death Guard I’m going to take the following 1,750 point list;

This uses the Emperor’s Fist Tank Company Specialist Detachment – which gives me access to a couple of Stratagems, but also the Hammer Sunderance Battle Cannon which is a normal Battle Cannon – but always does 3 Damage

This lands me with 12CP after the deductions for the extra Heirloom of Conquest and for taking the Emperor’s Fist Specialist Detachment. 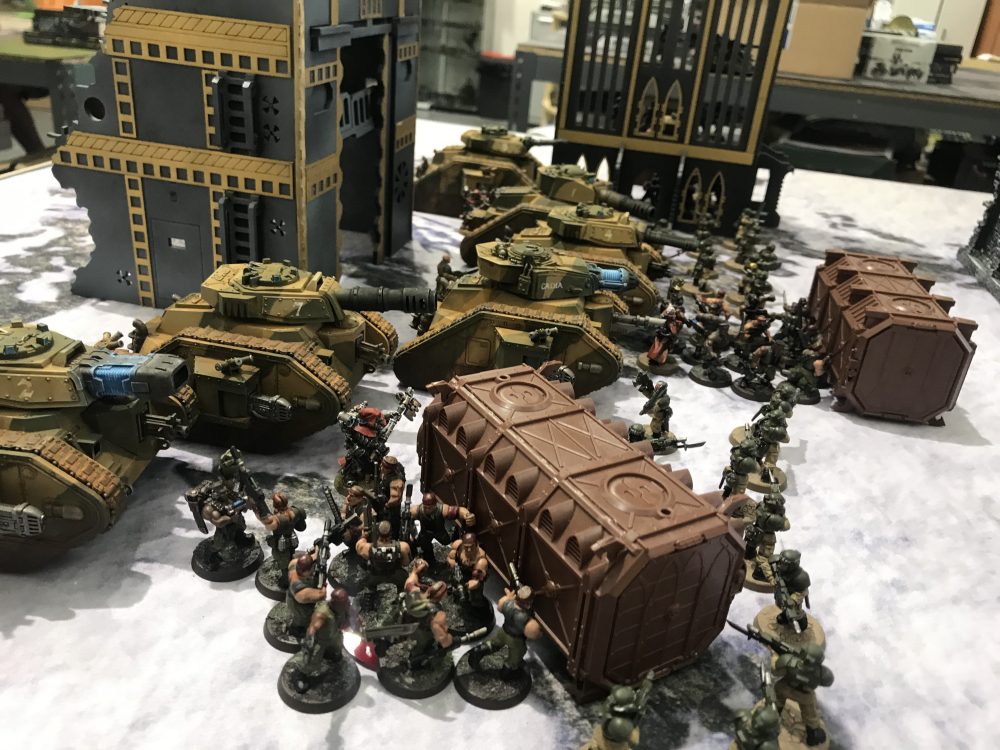 My deployment for the game

My hope is that I’ve removed all the dead weight I was taking before. No vox, no Ratlings, no iffy special weapons, no Chimeras, etc. Every single unit has a purpose.

I do have one Plasma Gun, but that’s because I had exactly 7 points left over to use.

The Ratlings, which I love, are gone too. They’re handy but against Disgustingly Resilient they just don’t cut it. One day I’d like to run 30 of them with the 5++ given by the Custodian Banner chap.

I now have Autocannons embedded into my Cadian units. To give them some ablative wounds.

I now just need the mission and the cards to be kind. This will be the best chance I get…

Astra Militarum on a Budget – 500 Points

All The Leman Russ – 1,750 points Astra Militarum vs Death Guard