Battle Reports – What Are They Good For? 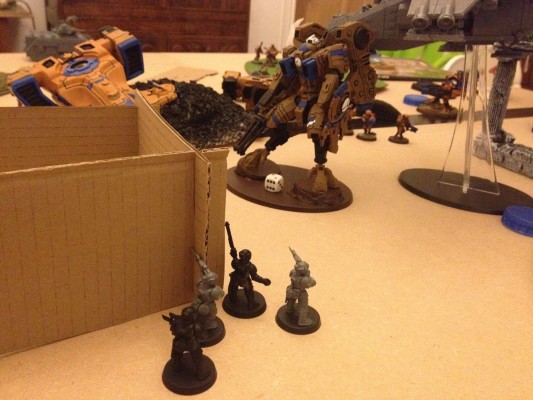 Guardsmen vs Riptide – A bad day at the office

As some of you may know I have been trying to come up with a different style of battle report. That one uses the space bar to navigate between slides in a kind of faux 3D environment. I have had some really good feedback from a fair few people on Twitter, mostly good and all encouraging. Thank you again to you all!

Its now been three weeks plus since my last game and I have yet to turn it into a meaningful report that I can publish and bore you all with. Plus I have another game arranged for tomorrow evening. So, now I am here trying to figure out what battle reports are good for – if I cannot complete one in three weeks then I must be doing something wrong. This new method is very slow and its taking me ages. I need a rethink.

My first report was a brain dump, it contained everything, it contained too much. It was just a turn-by-turn. blow-by-blow, roll-by-roll commentary of the game. It didn’t especially inspire me writing it, nor anyone else reading it I expect. What it did do though was teach me. Knowing what happened in every turn, to every unit made me think more about the wheres, whats and whys of the game. This is the sole good thing I have taken from the battle report.

With my second and latest battle report I went for a completely new approach. This was my first time using a library like this to present something – think of it as a web based PowerPoint (or KeyNote) presentation. I wanted to use my web skills for the good of 40k and do something different. Something that was not a brain dump, something that would appeal to others. It worked! More people were interested this time around and by a staggering amount. The first article produced zero interest I think, but the second produced some. Success!

But for all its glory, shiny and its ability to catapult me over 74 followers it lacked something. It really did. It was stale, it was boring – it was at the other end of the scale from the first report. I had gone too far I fear. It felt like I was presenting a set of facts to a client; this happened, then this, look at this graph, *yawn*, the end, call me if you’re interested. Maybe I am being harsh on myself, but this is what I felt. Having said all this there was some really good reaction to the report – thank you again to everyone who chipped in. But it did seem to lack something.

And so, here I am pondering about Battle Reports, and what are they really good for? What should they do? And for who?

It is getting clearer in my mind. What do you like to get from a battle report?

Why Were We Annoyed At The 7th Edition