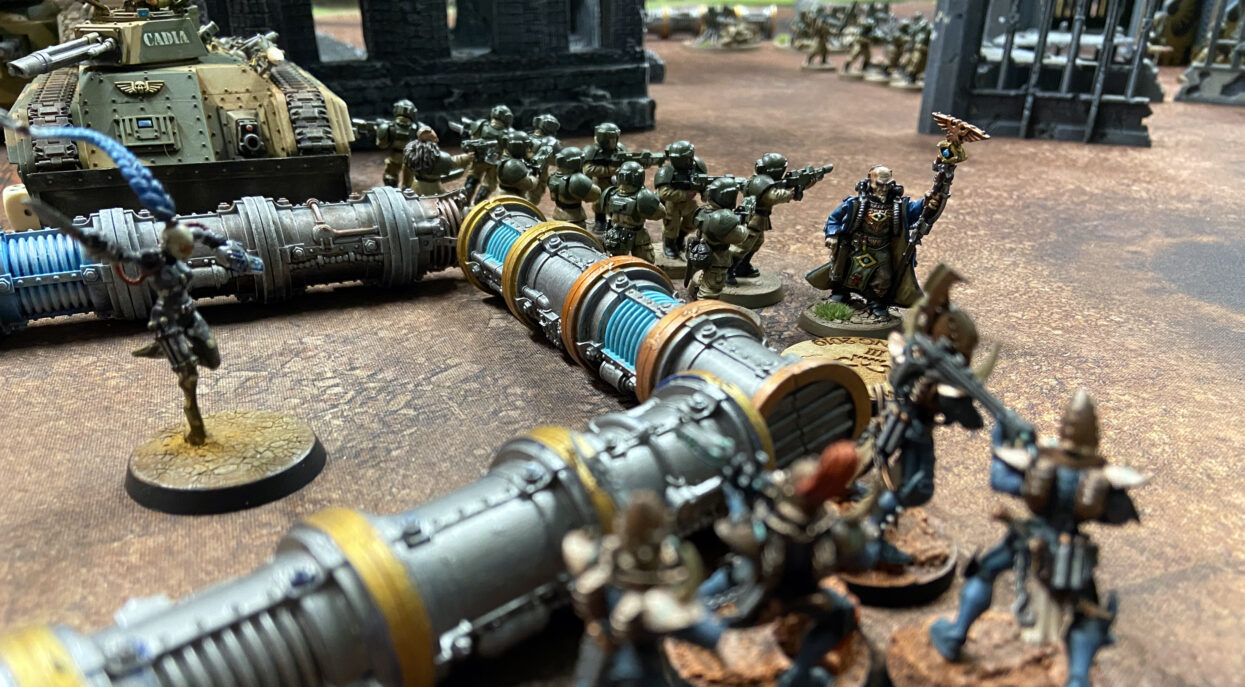 This is my first ever Astra Militarum vs Dark Eldar game! It is gonna be rough I think!

This is my first ever battle against Dark Eldar, fielded by Liam. I have heard a lot of the tricks and nasty they can bring to the tabletop… I expect this Astra Militarum vs Dark Eldar to be tough. This was fought at Boards and Swords. 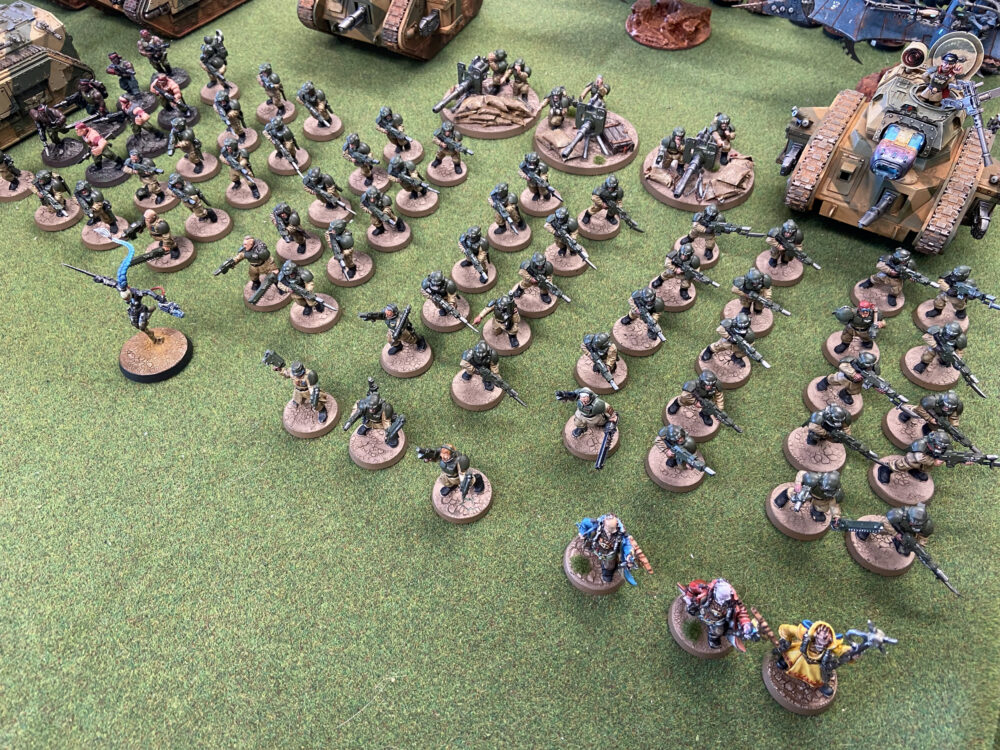 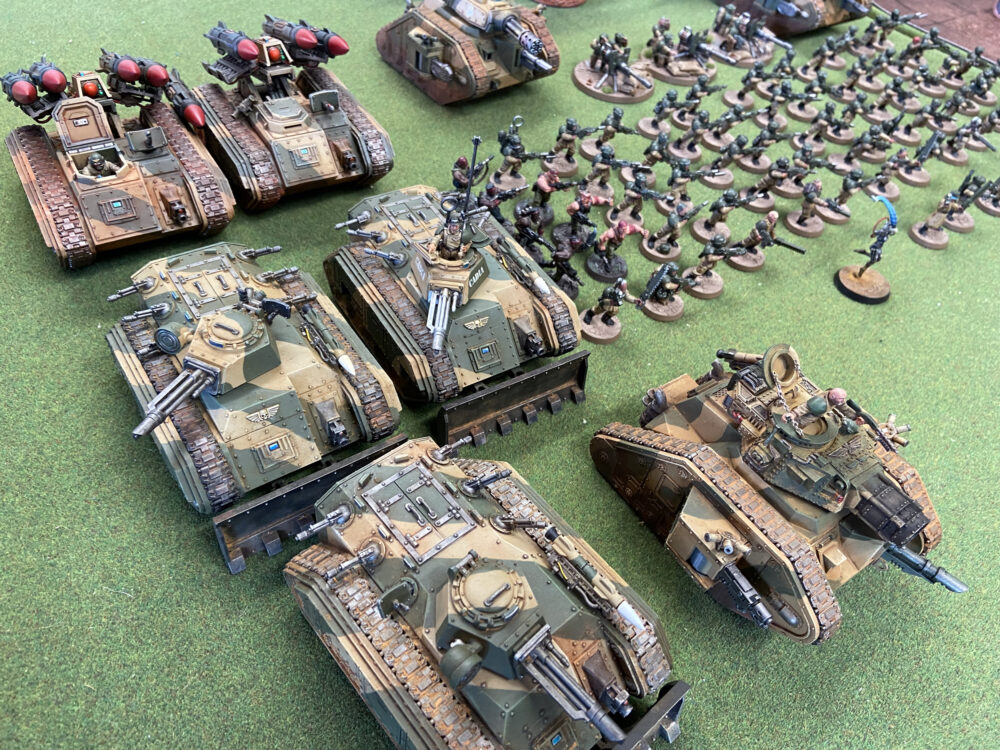 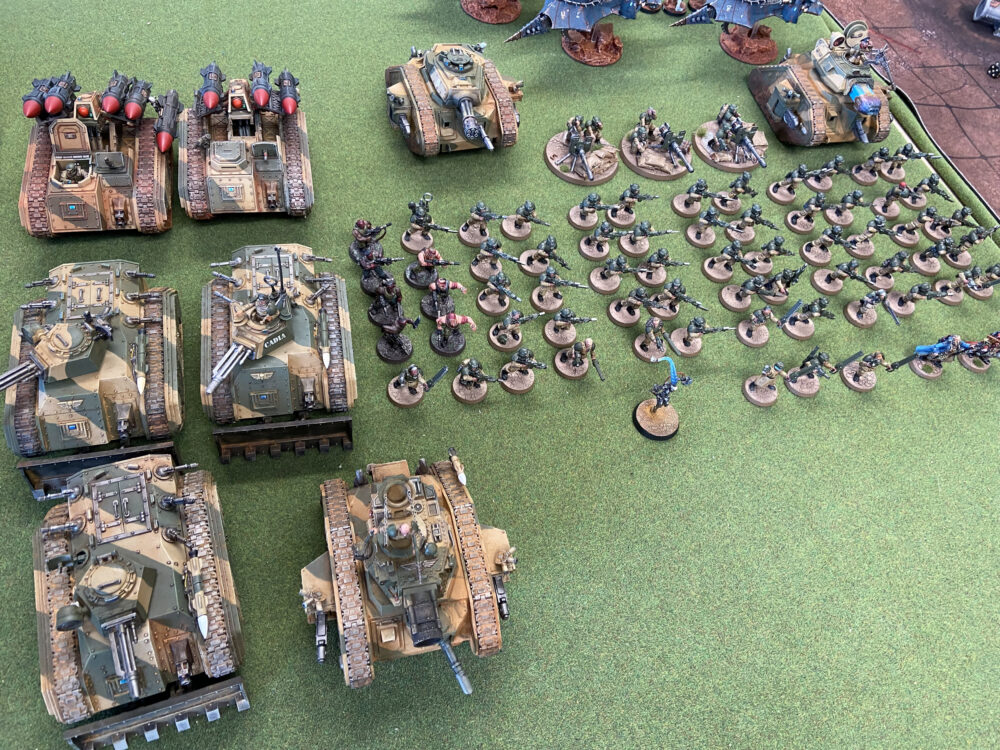 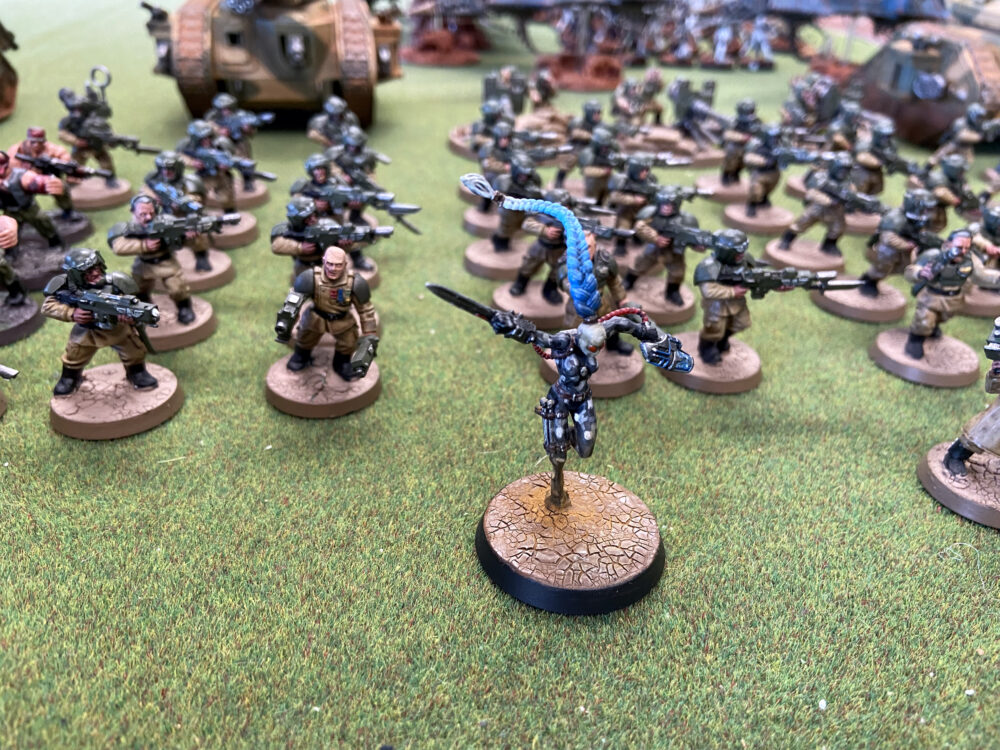 I figured that this game is going to be tough so I tried to make a decent list to try and survive and outgun the Dark Eldar. I started with my list that beat the Death Guard back in mid-July. This felt like a good point to begin from, a win.

I have to hit them hard I think in the first turn to stand a chance of getting a victory, if I get 40VP over the duration of the game I will be happy.

I think it will be really hard to keep my Tank Commanders alive with the enemy flying boats being able to move 14″ over everything and also shoot their Dark Lances 36″ – that is a 50″ threat range and on the current battlefield sizes, that is the whole board. But keeping them alive might be the key to winning this, which in turn will allow me to keep removing the enemy ranged firepower and melee threats.

I really need my Manticores to perform in this game, too often they are terrible, so this game is the game they will shine?

No special rules for this mission and neither of us took the mission-specific secondary – so all that matters here is the map. 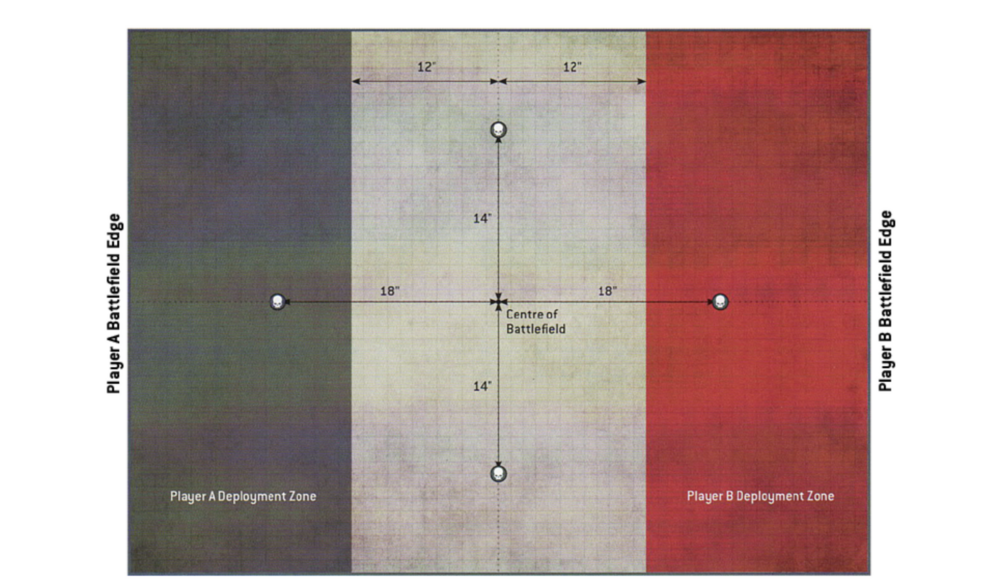 The Battlefield – Terrain Set Up 2

We used Terrain Set Up 2 from the Games Workshop Metawatch article in June 2021. The blue and red terrain we played as Ruins and Obscuring. The green we played as Dense.

I really liked this set-up, it was just right for cover, meaningful movement and hiding as well as position to get that -1 to hit from the Dense Terrain. Would recommend and would use again 100% 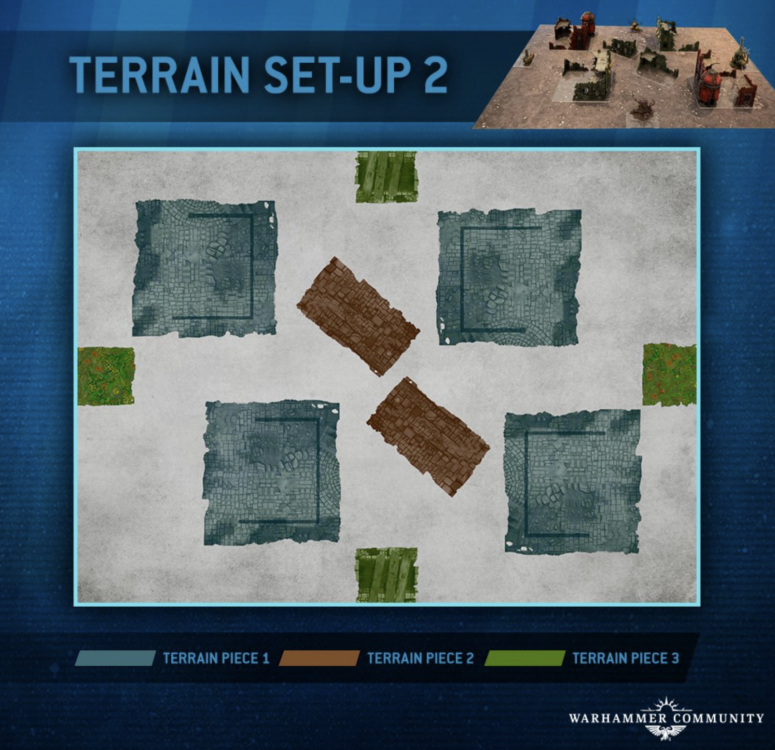 In hindsight I was happy with my deployment, I pre-measured all my Leman Russ ranges to ensure they were able to use their relatively short-range weaponry. My Chimeras deployed forward to ensure I was aggressive with my infantry to gather Primary VPs. The Manticores went at the back out of line-of-sight. All my heavy hitters were within the 12″ range of the Relic of Lost Cadia too.

Liam’s Dark Eldar deployed right forward, which was good as this meant they would be in turn 1 range of my Demolisher and Multi Meltas. The Ravagers were in reserve and then 3 Raiders disappeared before the game started and went into reserve too! Dark Eldar tricks! 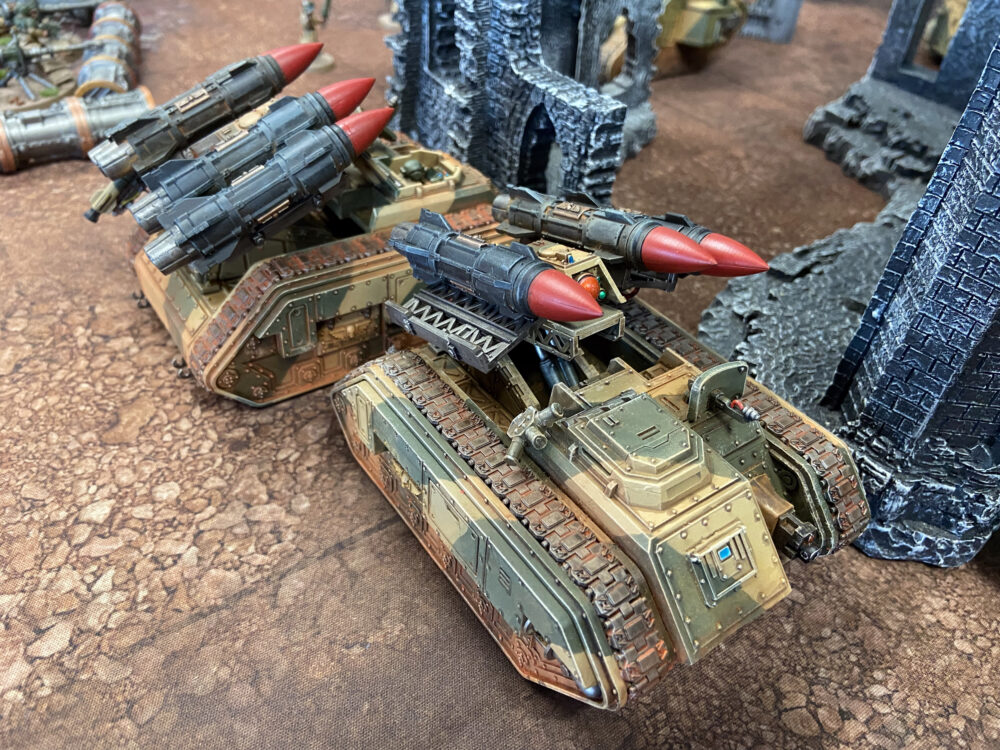 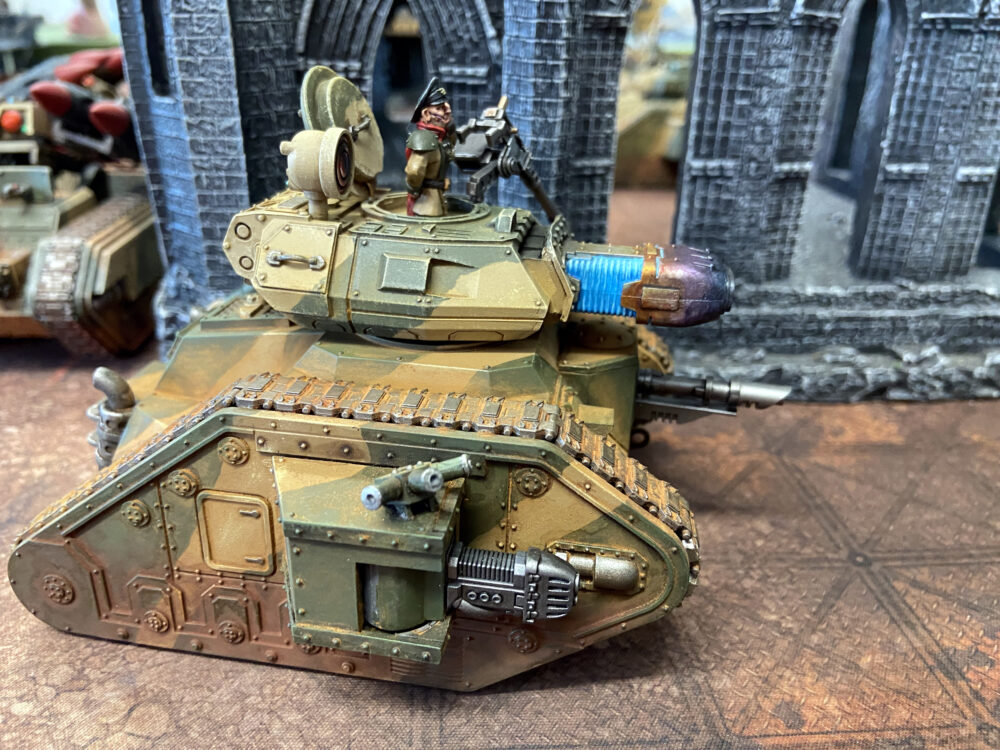 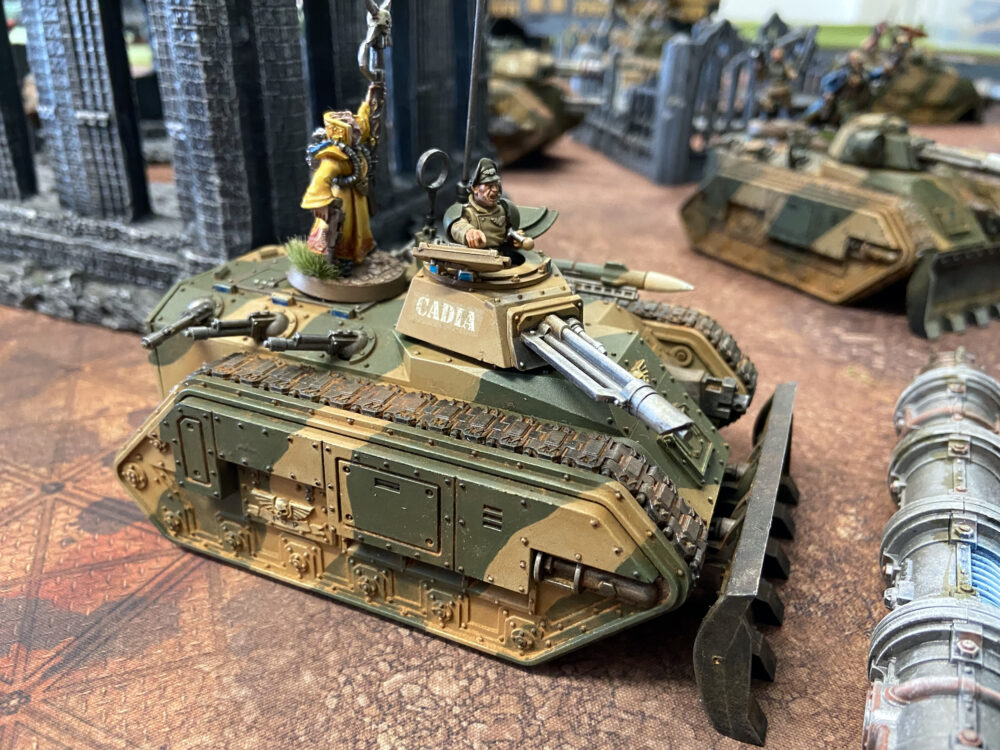 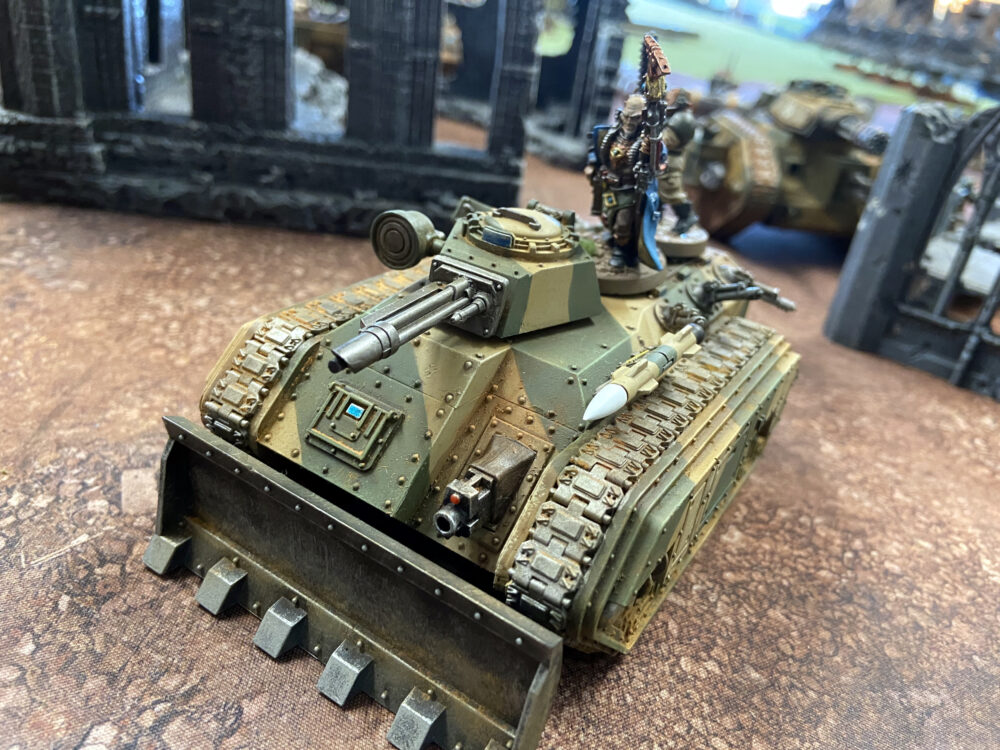 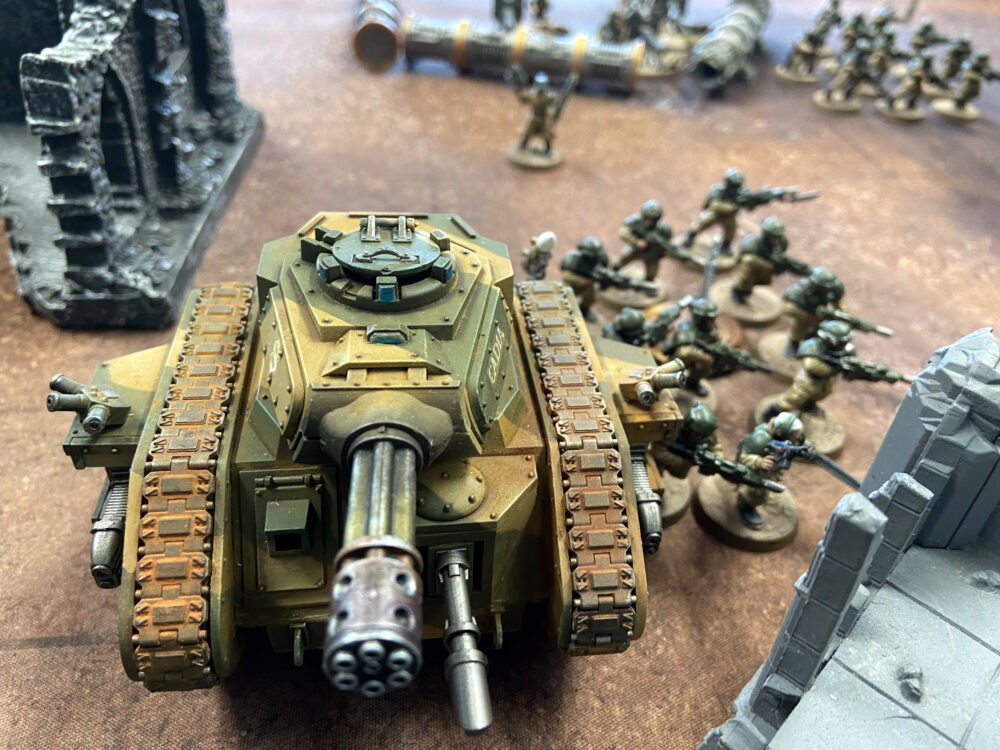 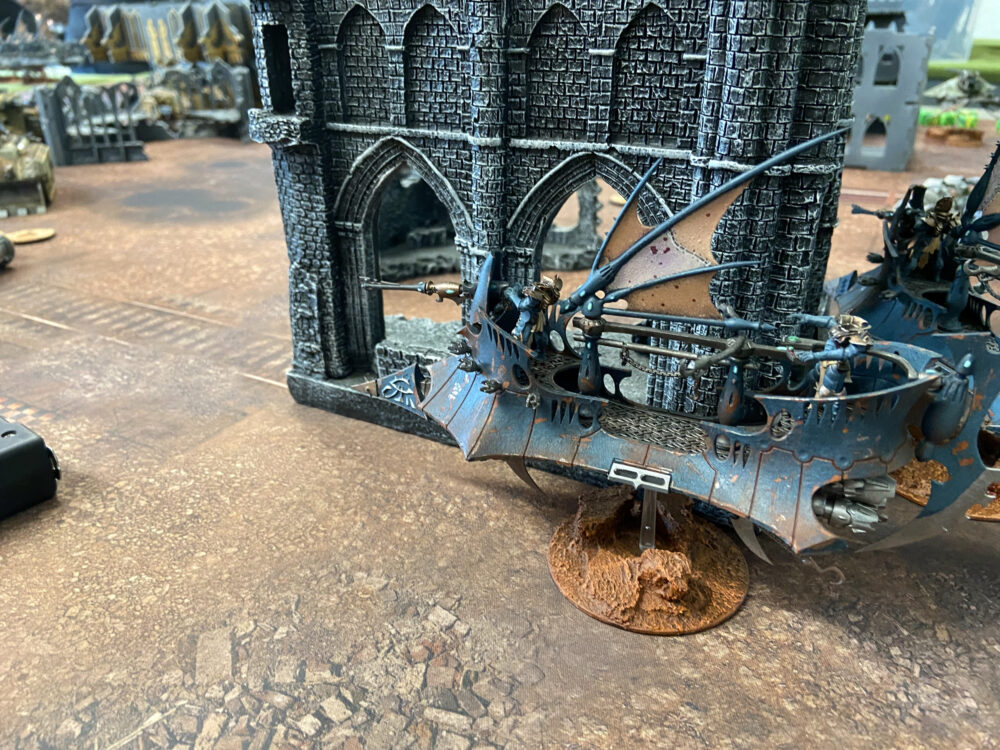 I took the first turn and used the Relic of Lost Cadia.

My Chimerasa moved up to just be within range of the objectives. My Leman Russ tanks shifted around to get line-of-sight onto the remaining Raiders. My shooting went well for once! Two of the three Raiders on the battlefield died to the Demolisher and Pask – plus the Venom. The Manticores then cleaned up with Incubi that came out of one of the Raiders and killed 3 of the 5 Kabalites too.

This was a good start, but it was only about 30% of the job done as there was so much stuff left to come onto the battlefield. Plus one Raider is still intact on the battlefield. I had popped smoke and shot this turn with all my Leman Russ and got all my powers off!

The Dark Eldar did not have much on in the game at this point – they did some shuffling and took some wounds off a few of my Chimeras and just about halved Punisher’s wounds. This goes to show how powerful they are – that even after killing two Raiders with a Dark Lance each and 1.5 infantry squads, they can still plink of wounds with relative ease. 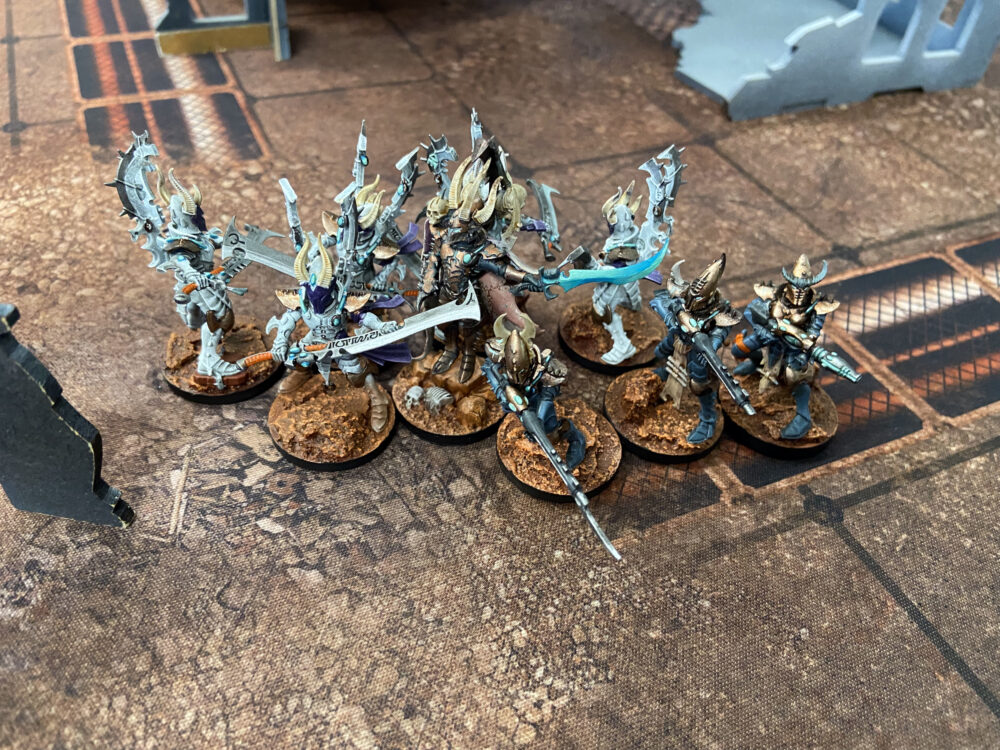 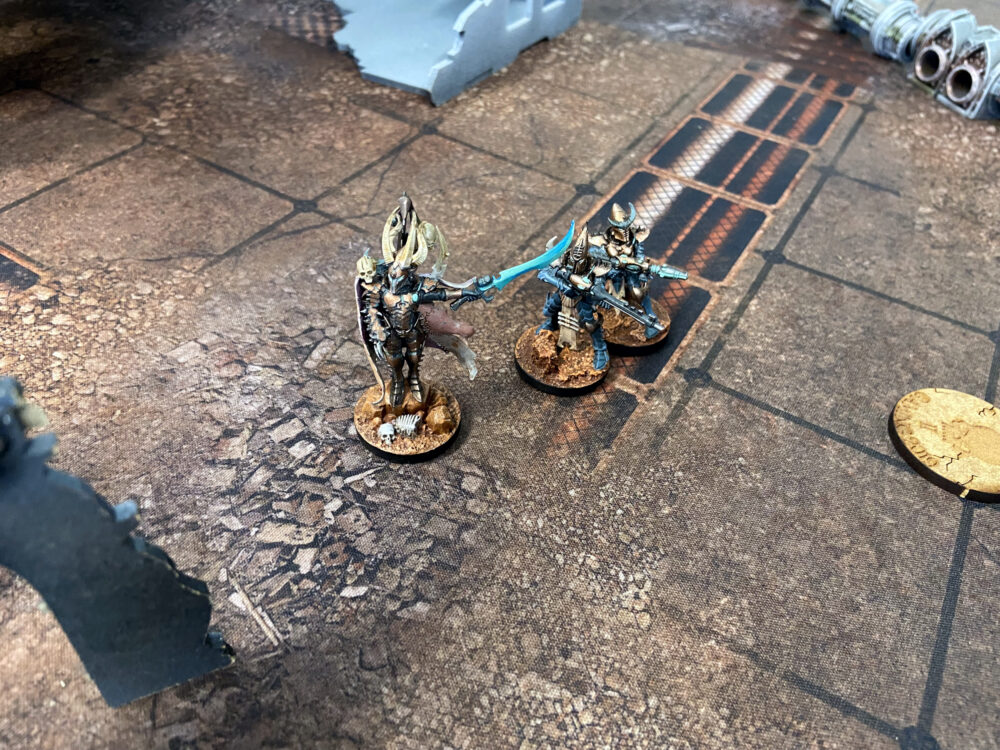 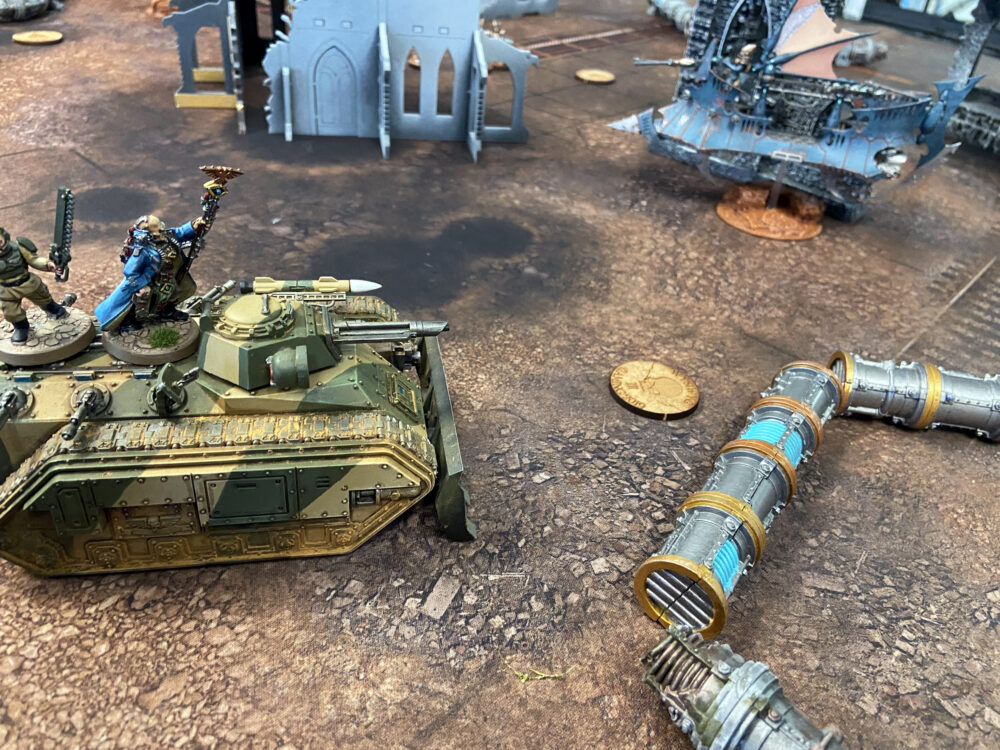 I expected the Callidus’ Reign of Confusion into this turn for 2CP. Over this turn and the last Liam spent 2 or 3 extra CP above what he wanted to because of the Callidus. There was a point in turn 2 where he wanted to re-roll a Save, but could not as he had no CP left – thanks Callidus!

With so little to shoot at I did my best to get a line of sight to what was left on the table. And that went pretty well, finishing off the final Raider on the battlefield as well as a unit of Kabalites to stop Liam from getting anything on the Primary. Thank you Manticores. All that was left was one character which had a 2+ Inv – sigh – and a handful of Kabalites from the last Raider.

Now the Dark Eldar reinforcements arrived – in or round of shooting I lost the Punisher, Demolisher and a Chimera. I knew it would be brutal but that was insane. I could not match that on turn 1 with all my vehicles on the battlefield. The Dark Eldar come in with about half their force and remove vehicles like they are Guardsmen! 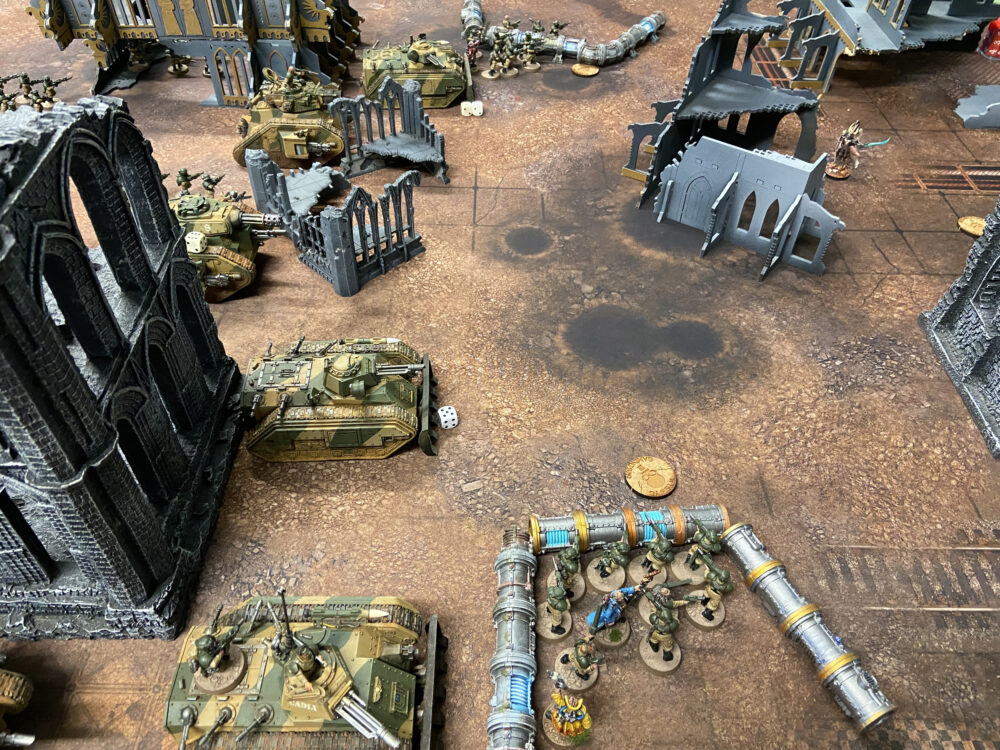 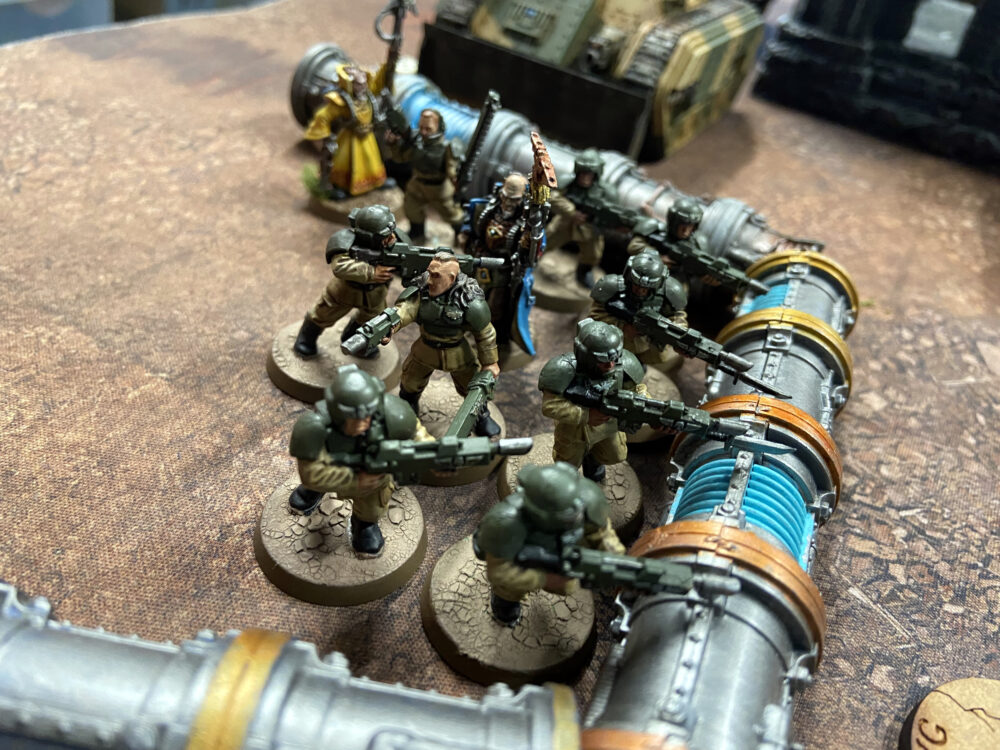 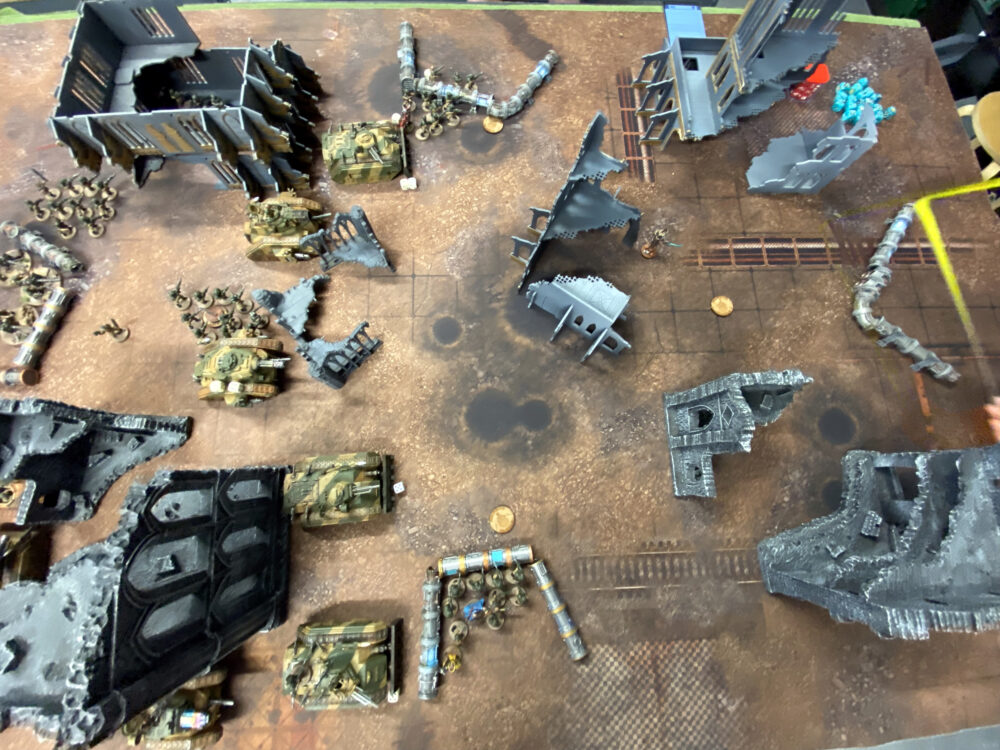 My memory is starting to fade now because things are getting messy.

My shooting is reduced now thanks to the turn 2 losses so will struggle to remove the enemy Raiders and Ravagers. Pask did neatly remove the Ravager on his flank and the other one was taken down to three wounds from a Manticore plus its Hunter Killer Missile. The loss of one Ravager was good, but having one left was not good. I shuffle my infantry around to get onto objectives in the hope of surviving and holding them via Objective Secured.

The Dark Eldar hit back with the single Ravager, killing the Manticore that nearly wiped it out. I lost another Chimera this turn too as well as whole swaths of infantry as the Dark Eldar characters and Incubi got into melee. 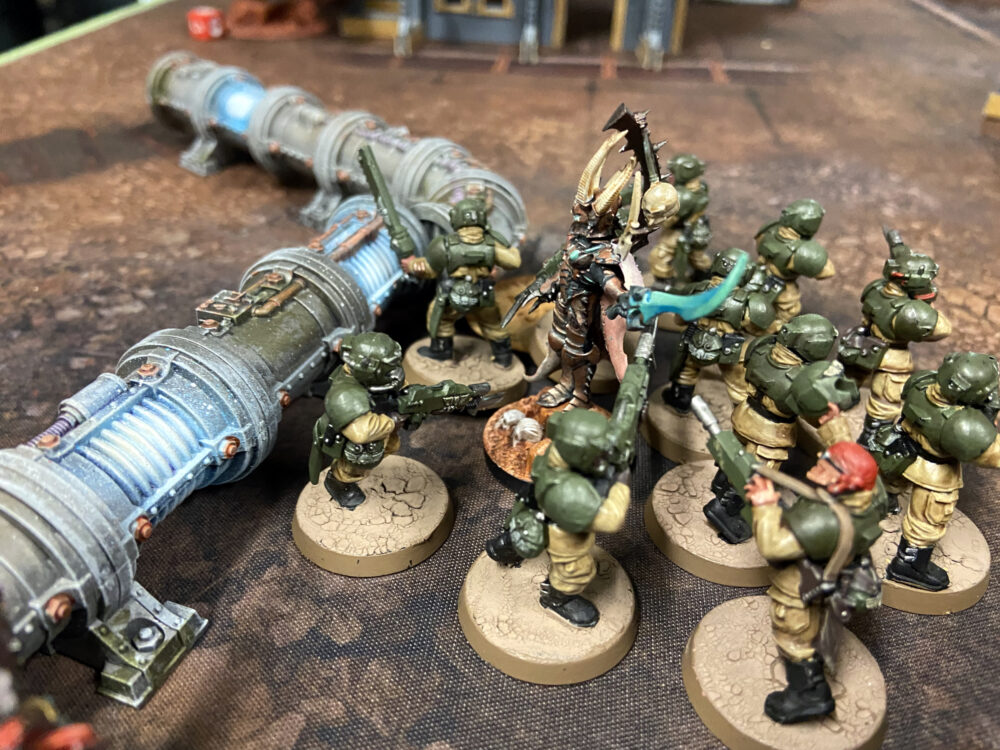 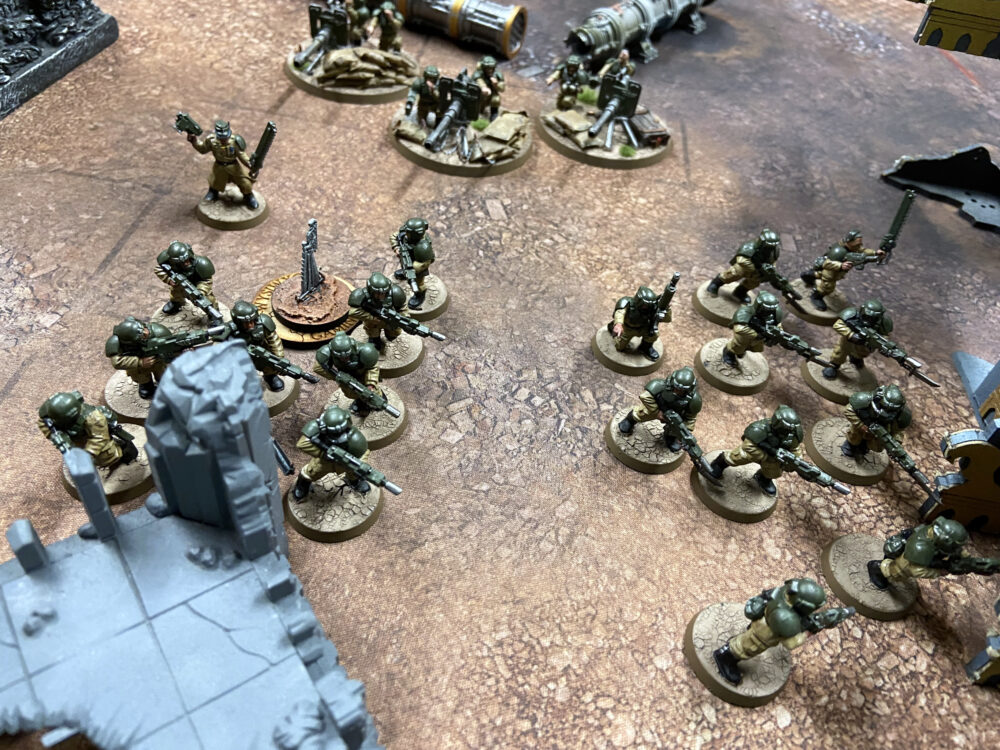 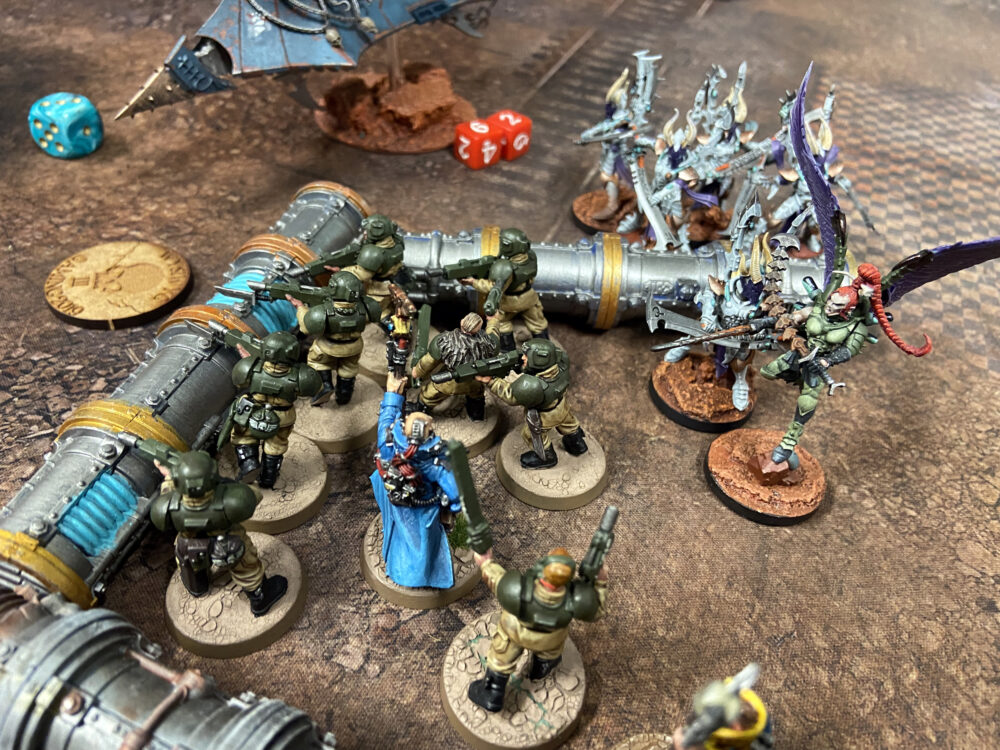 Turns 4 and 5 were quick as I had less and less left.

Pask did kill a Raider before he gave up the ghost in turn 4. He had performed very well for me, reroll 1s with BS2 is just unheard of for Guard – it was really impressive. Especially when you roll hot with the Plasma and get 11 or 12 shots from the turret and the sponson Plasma Cannons.

The Callidus came in at the end of turn 4. I left her so late because there was nothing to really go after beforehand – everything was just too open or in Raiders. She came in and missed with her BS2+ Neural Shredder! But, she made her charge into some Dark Eldar character – it might be a Succubus – and promptly killed it. Gaining me a CP in the process.

The game was close at the end of turn 4. I was leading but Liam had been closing the gape the whole game.

The death of my Guardsmen and vehicles continued into turn 4, but I was holding on.

In turn 5 I had to remove as much as possible from the battlefield to stop the Dark Eldar from gaining loads of Primary VPs at the end of the game. The Callidus moped up with Kabalite Warriors and I failed to kill a single Incubi on an objective. Killing him would have meant a Dark Eldar character moving back to take the objective rather than moving forward to kill my Guardsmen.

The Callidus died in turn 5, she was contesting an objective but alas she was no more. 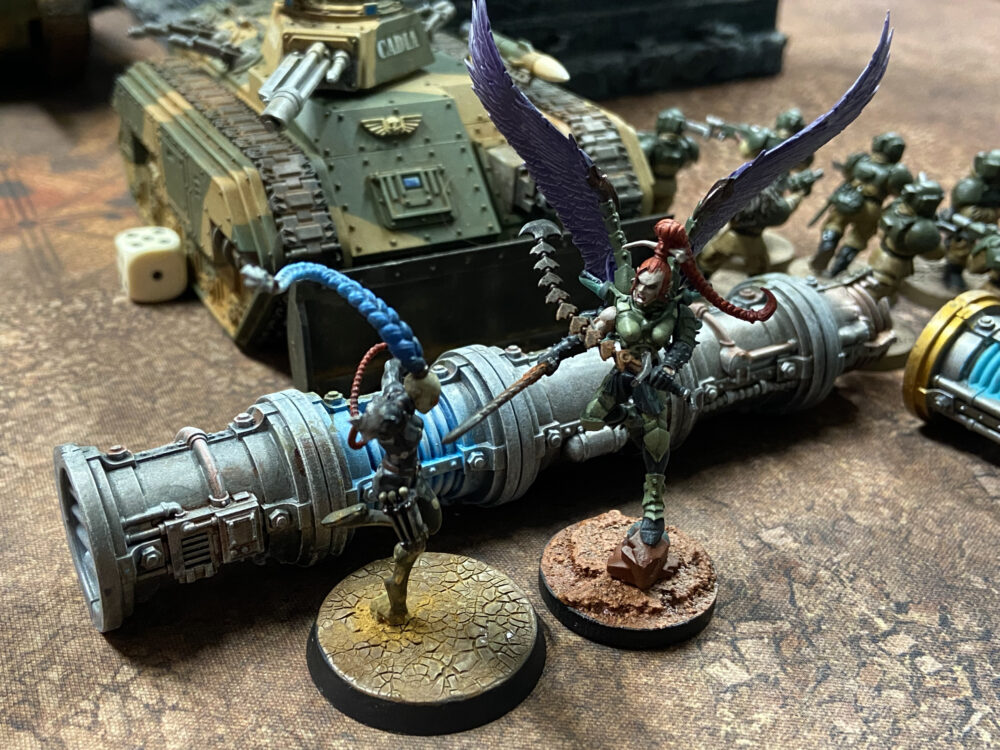 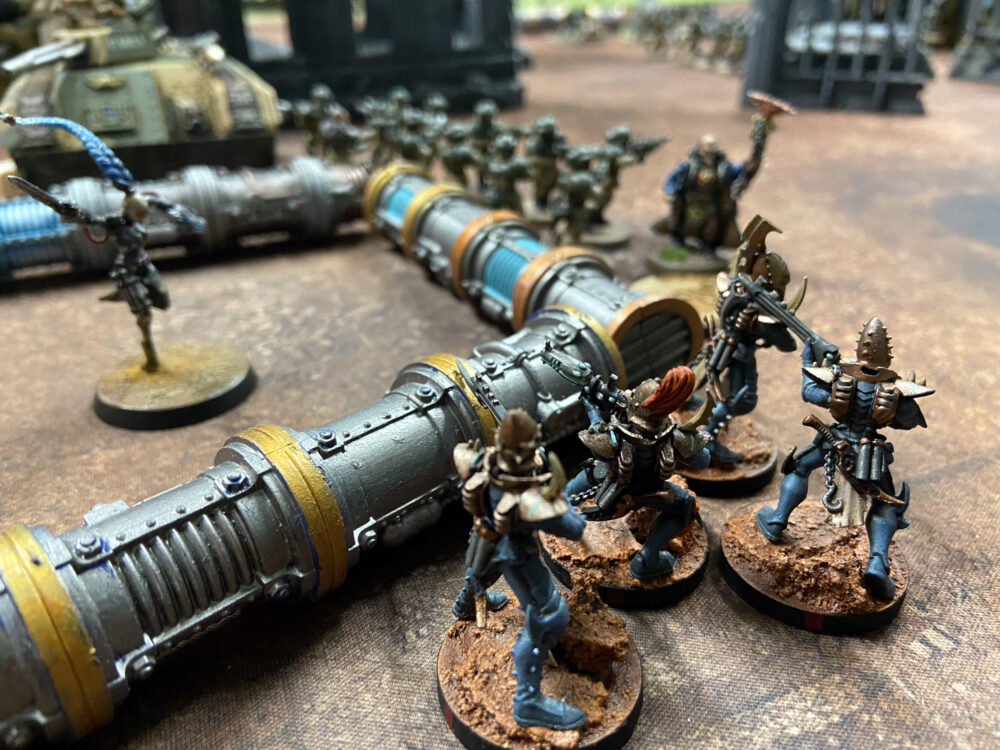 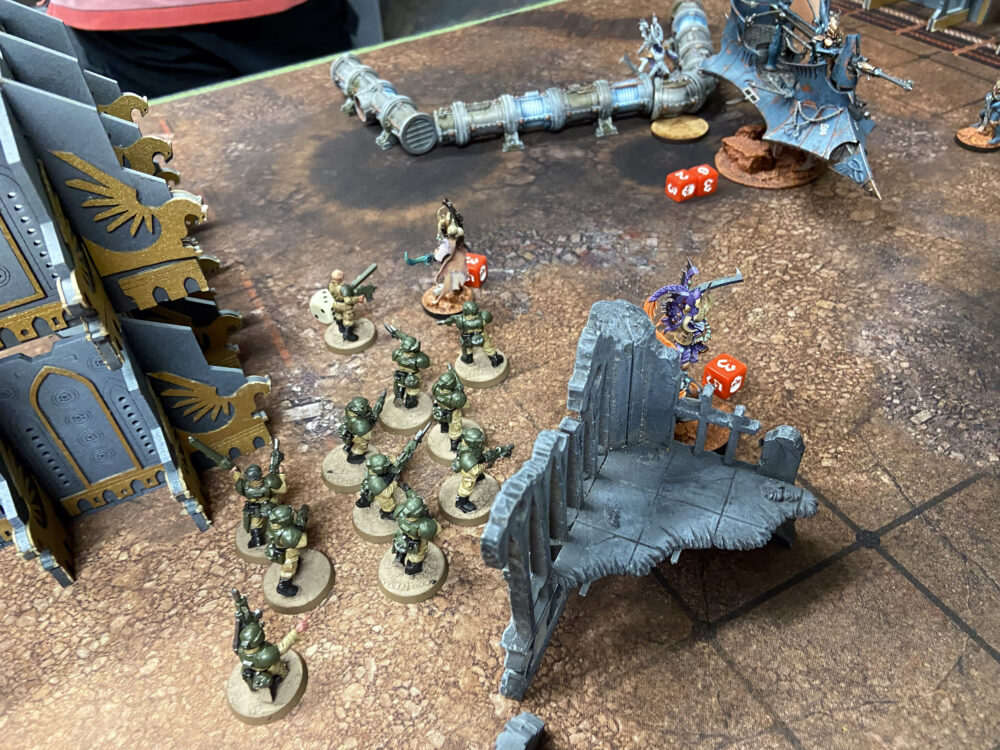 This game was much closer than I expected it to be and it was extremely fun. Thank you, Liam.

Pask is a beast and the Callidus did well for me too. I will 100% be taking Pask again in his Plasma turret and the Callidus remains an auto-include for me. I feel like she swings the game back towards a balance for the Guard. Draining enemy CP and removing enemy characters removes the power from the enemy more than anything else I can field for 100 points.

The Dark Eldar were nasty to play against, but I think I put up a good fight and made them fight it out until the last turn. I would play them again! 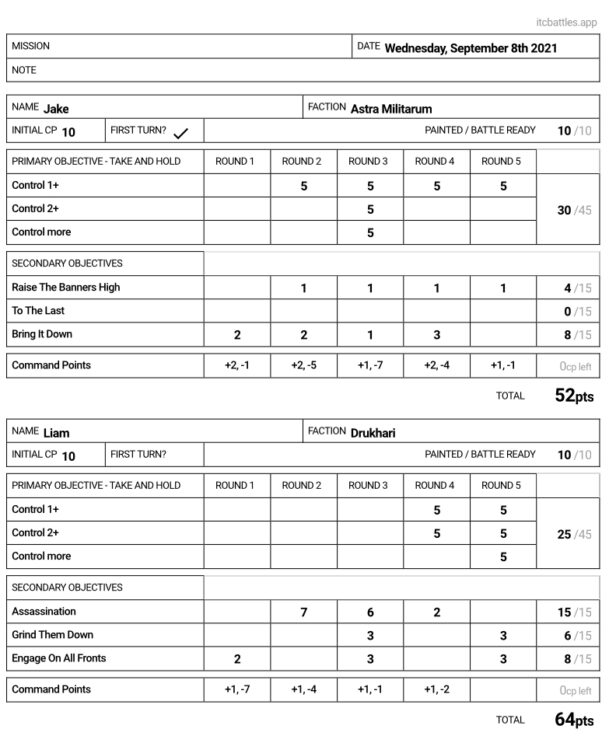