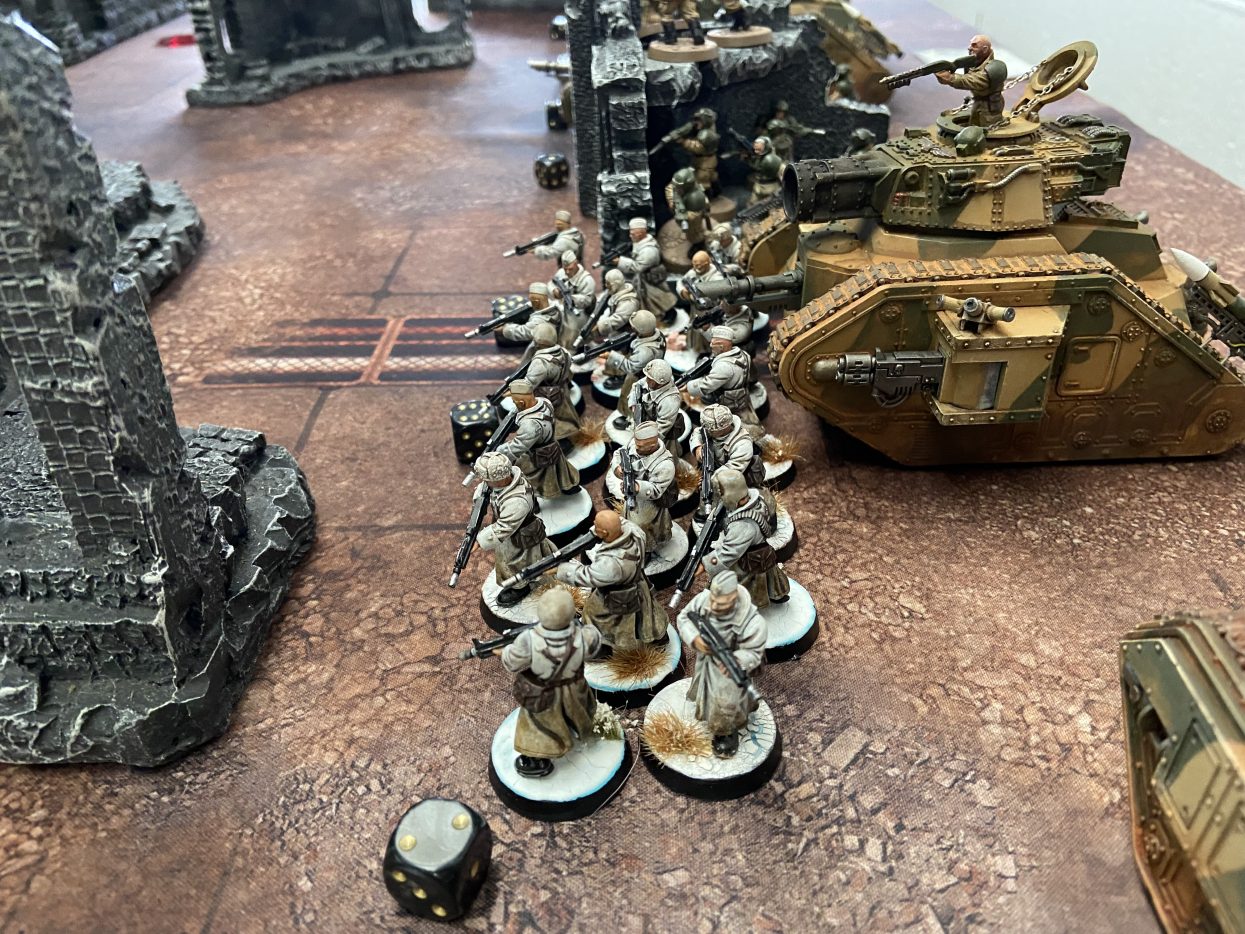 I am back fighting Death Guard today, this time it is versus Ryan who I have not played before for this 2,000 point Astra Militarum vs Death Guard battle! This was fought at Boards and Swords.

Usually, I write a big old summary about my list and my thought process behind it. I did that for my list vs Eldar a few weeks ago and got ruined, so this time I will skip the thought process and just hope for the best! 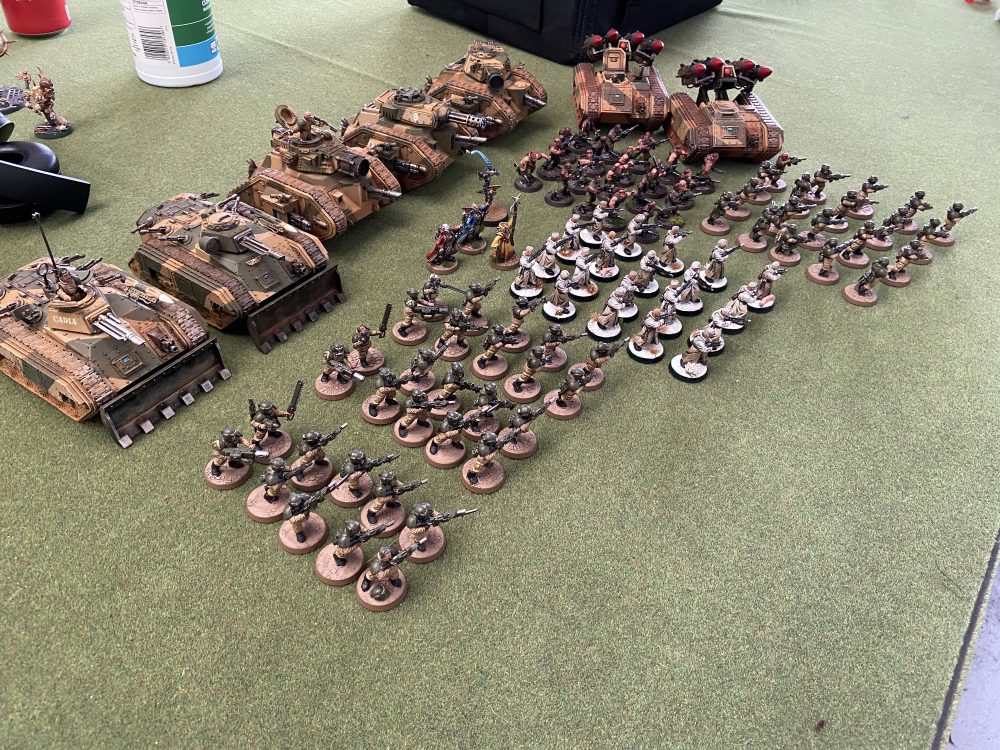 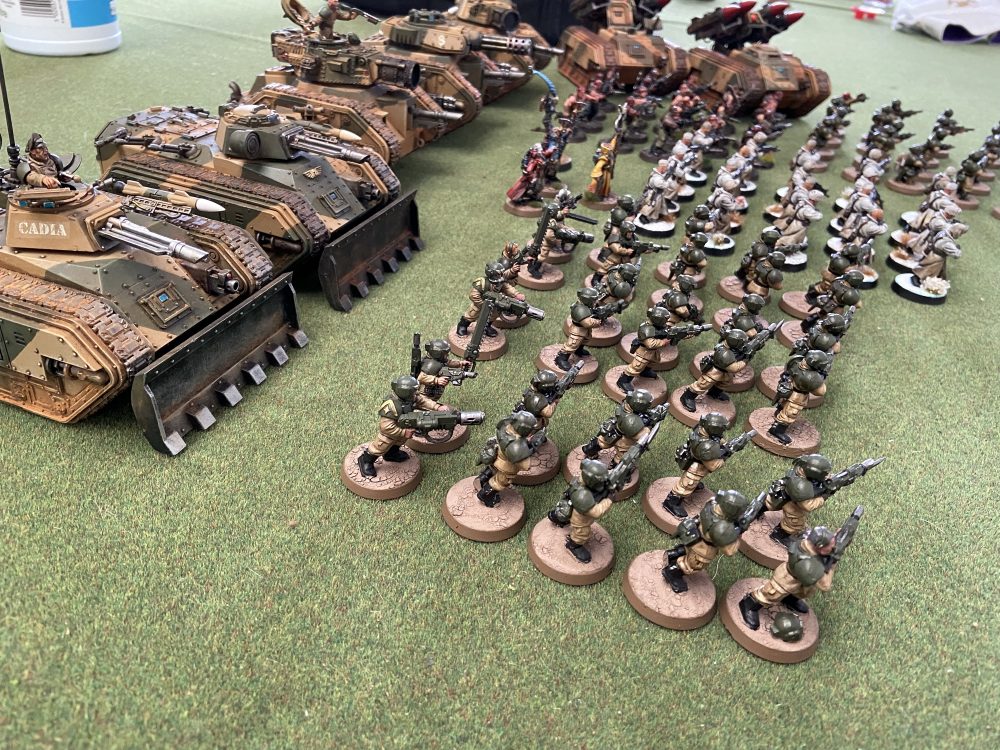 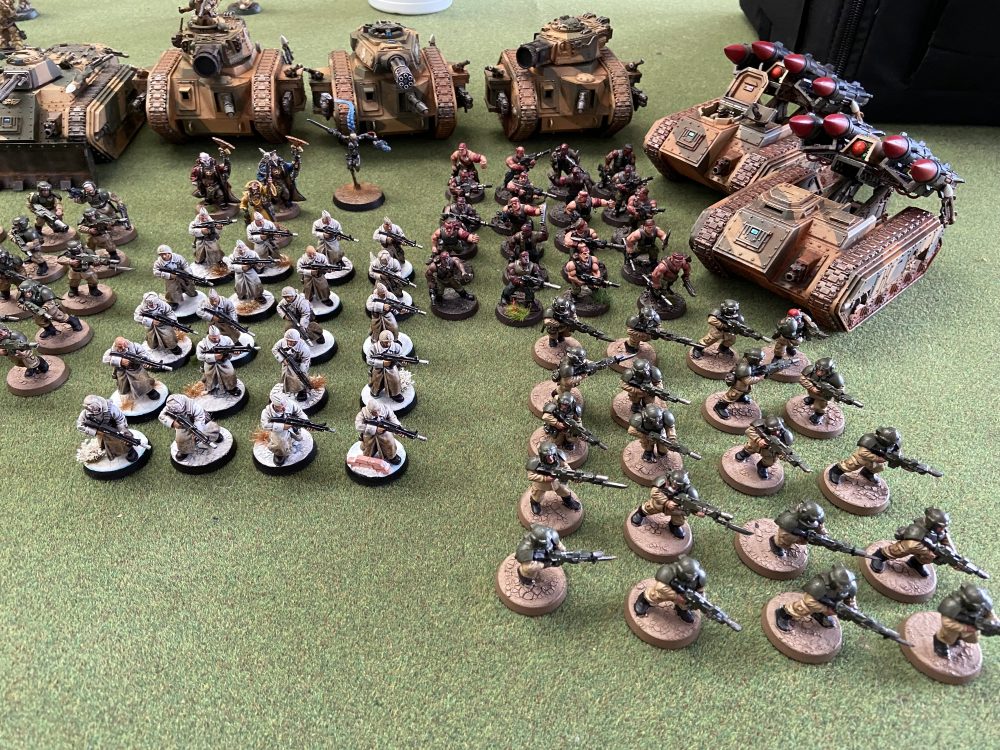 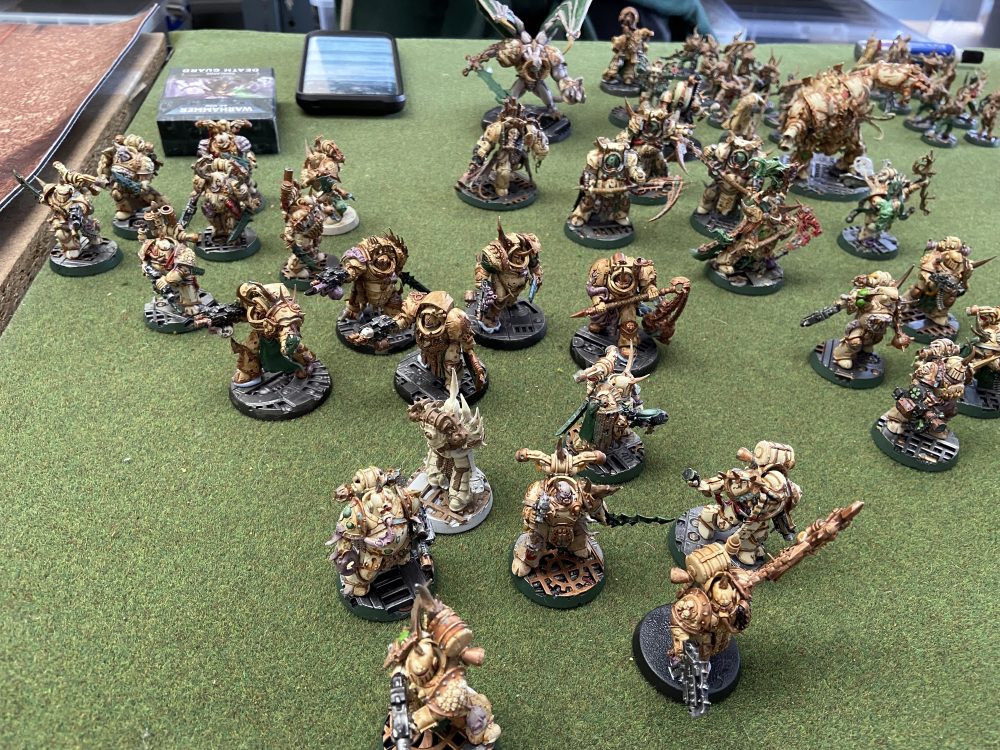 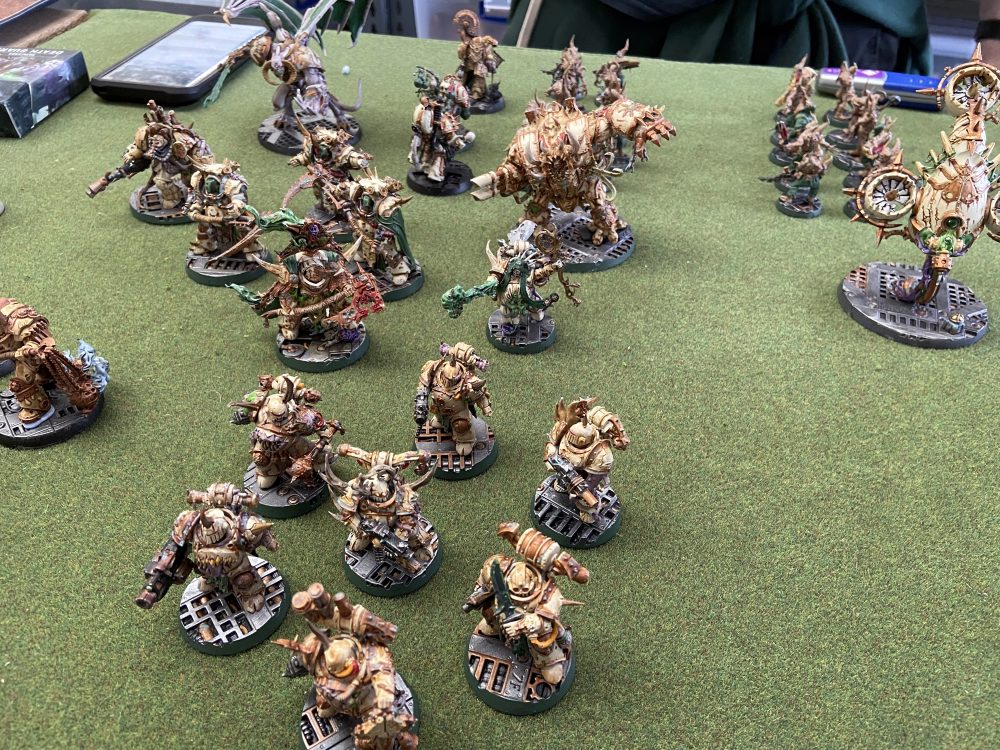 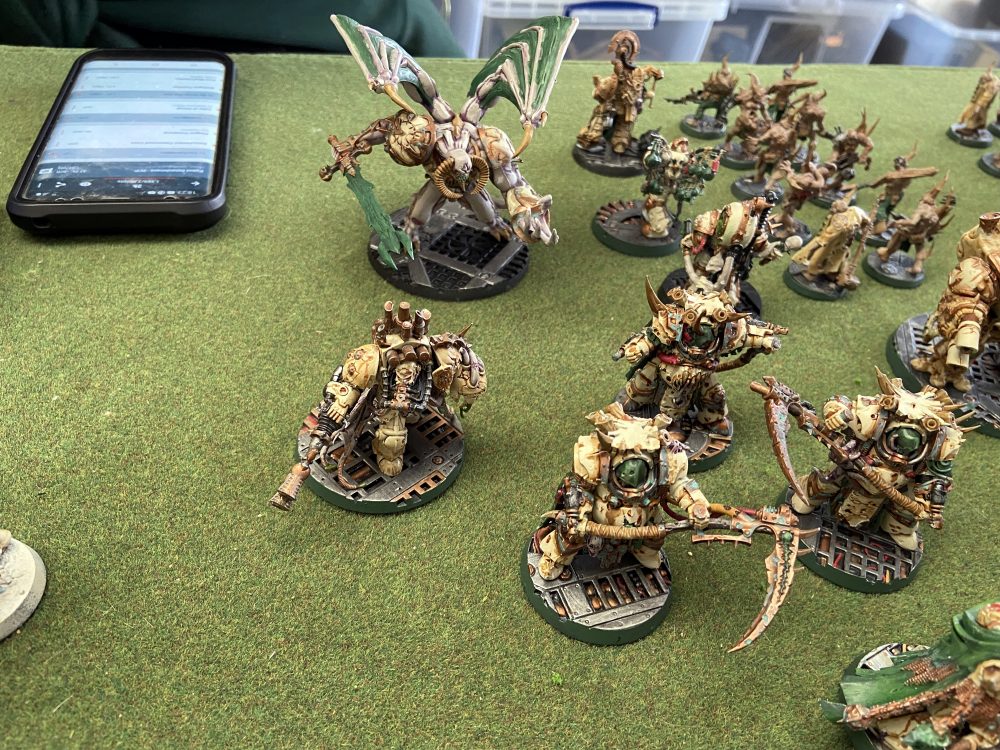 Neither of us took the mission-specific secondary. 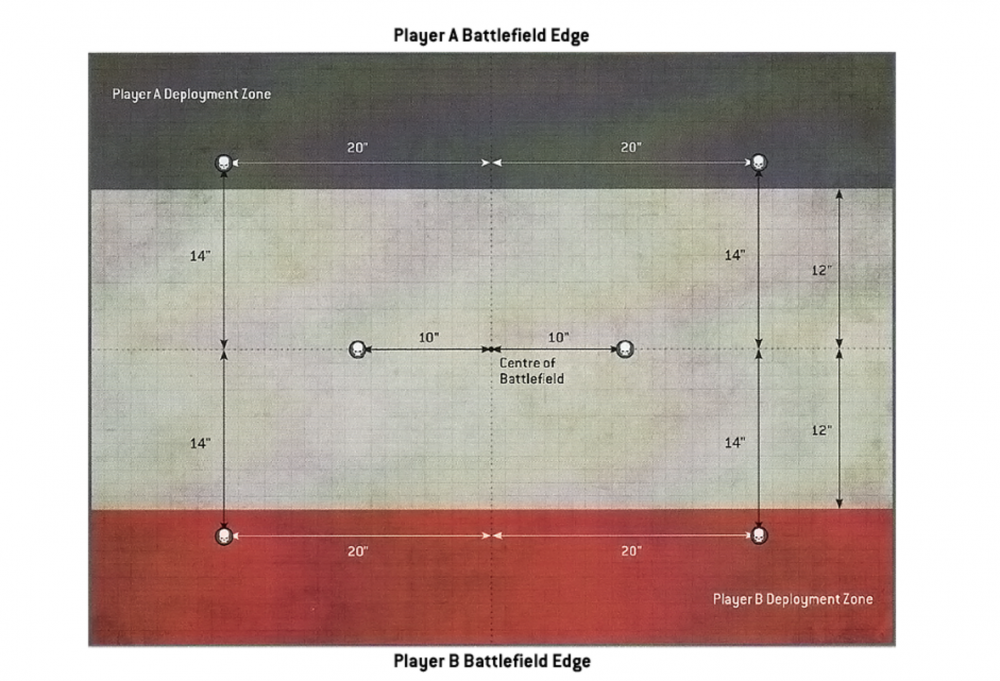 The Death Guard parked their way along their deployment zone line, as far forward as possible. Only the Hellbrute and Poxwalkers stayed a little but back.

I spread out my Guard with my Tank Commanders and Manticores piled around the Platoon Commander with the Relic of Lost Cadia. My Conscripts spread out along the lines to grab objectives and slow down the advance of the Death Guard melee units. 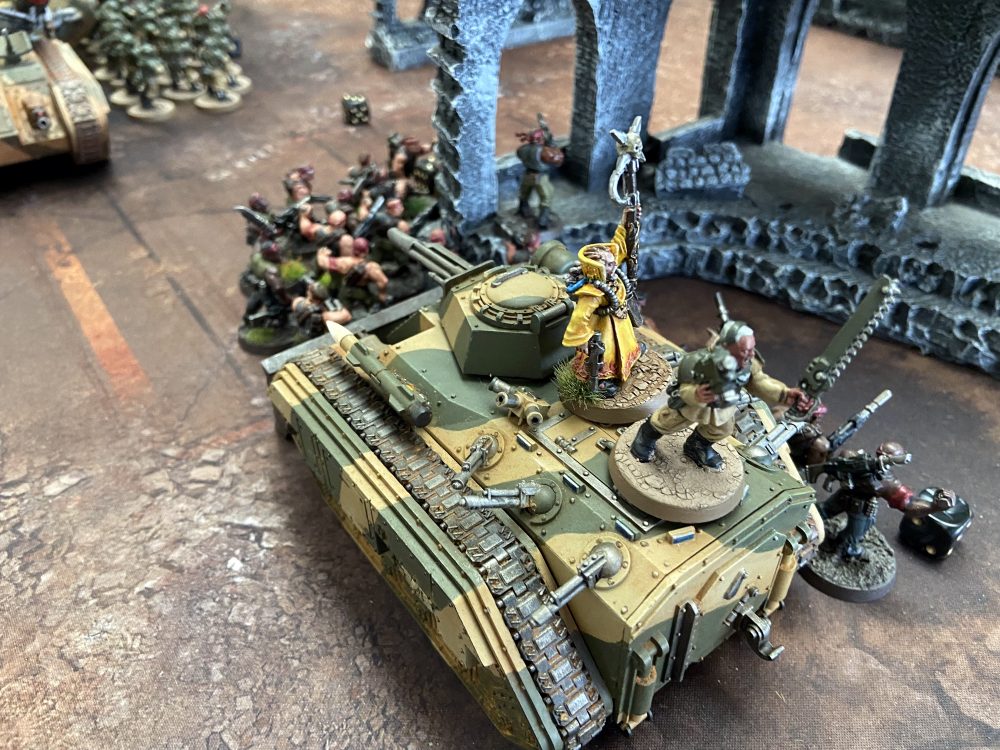 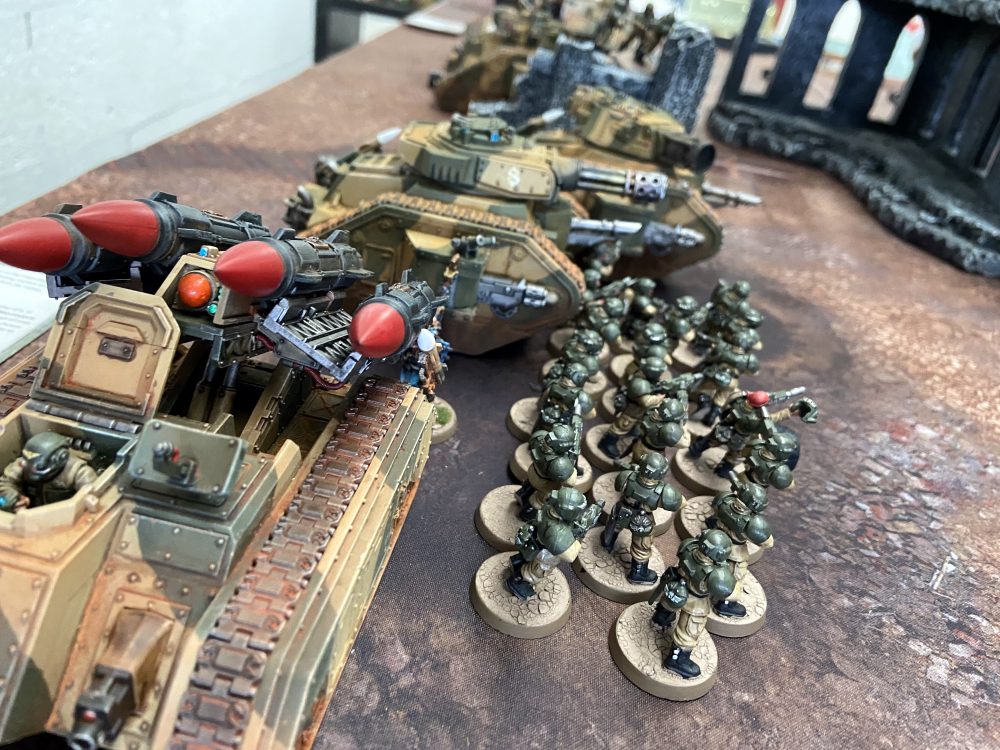 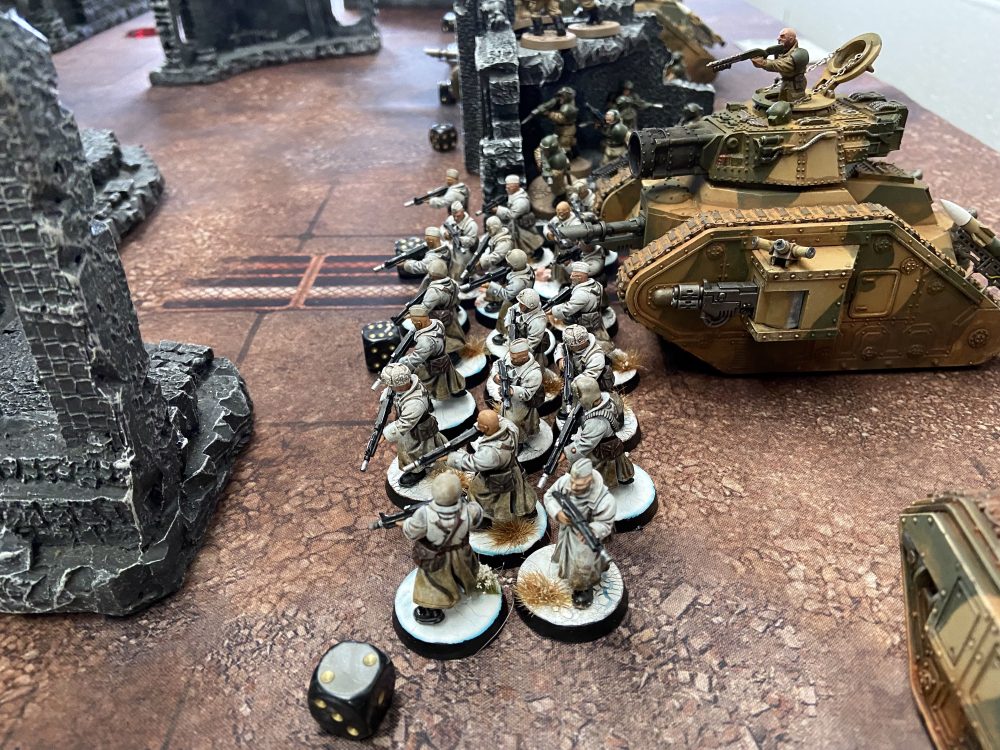 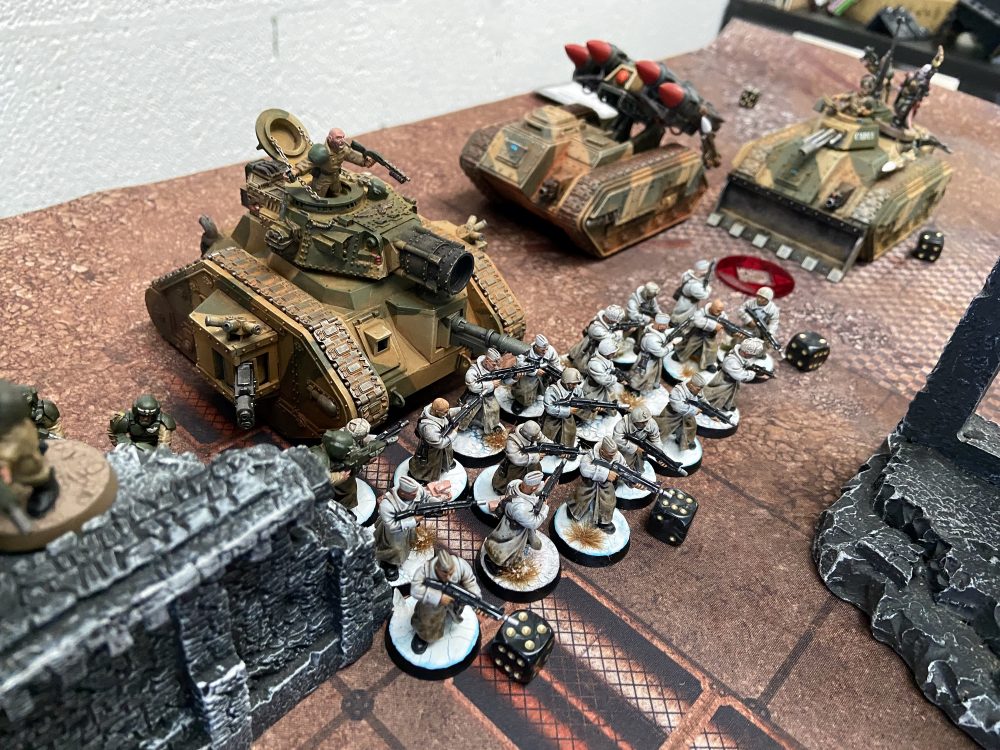 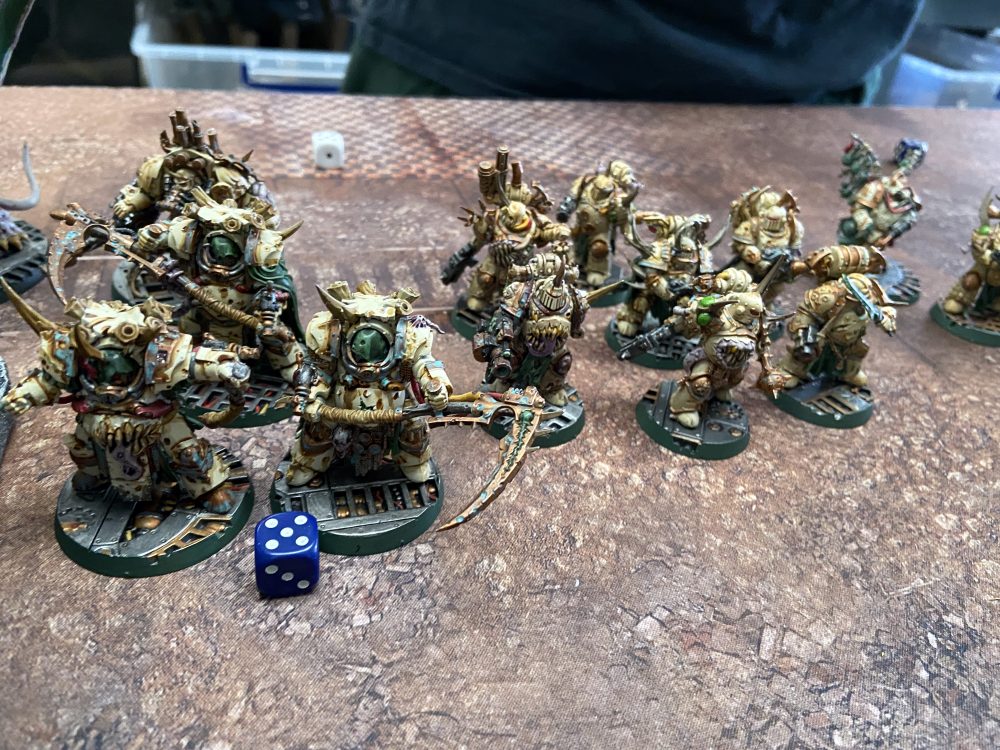 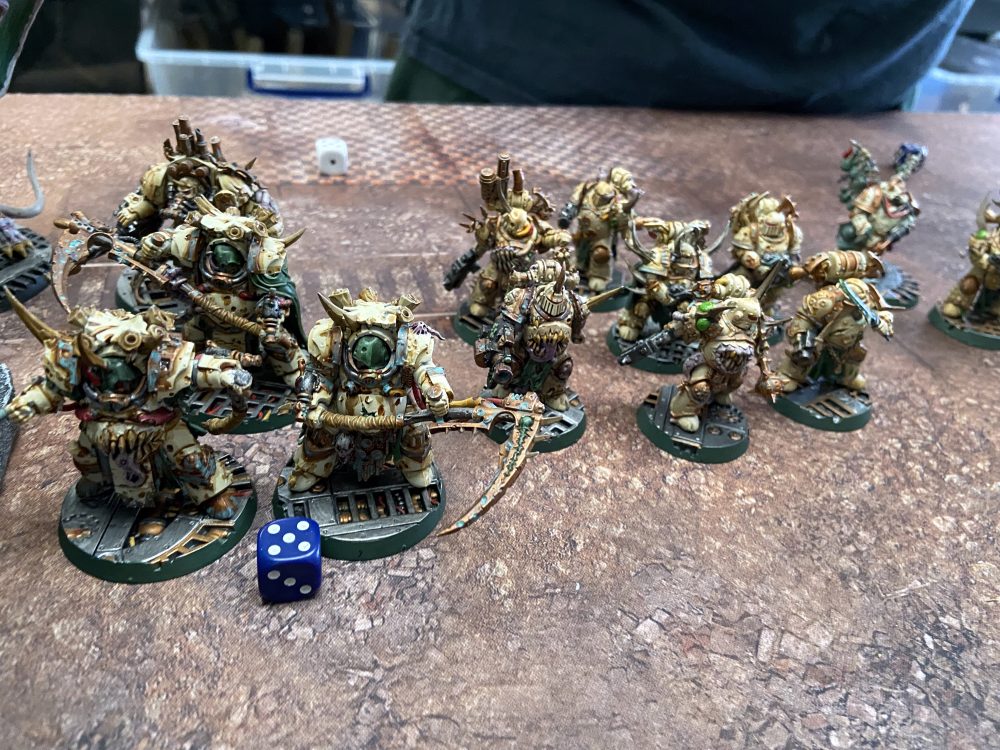 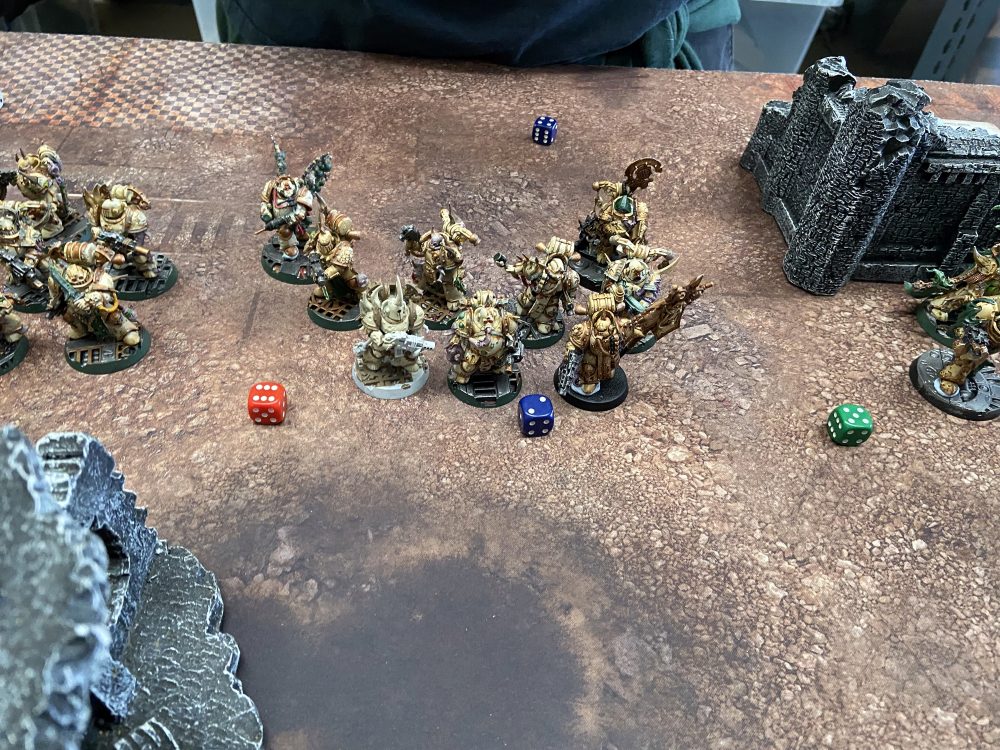 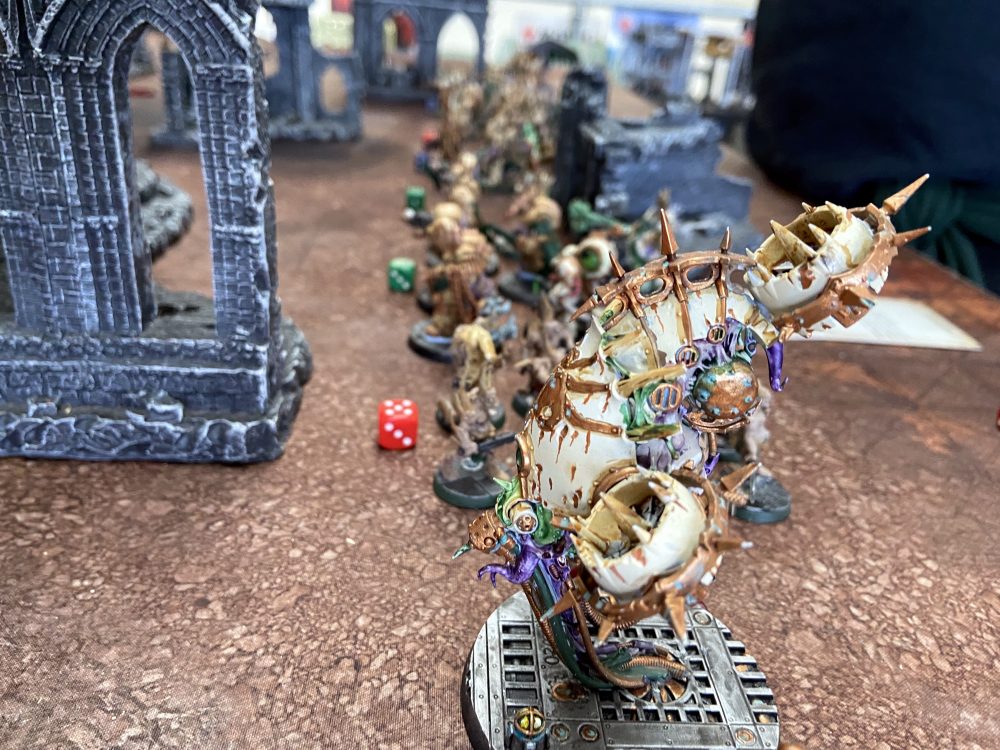 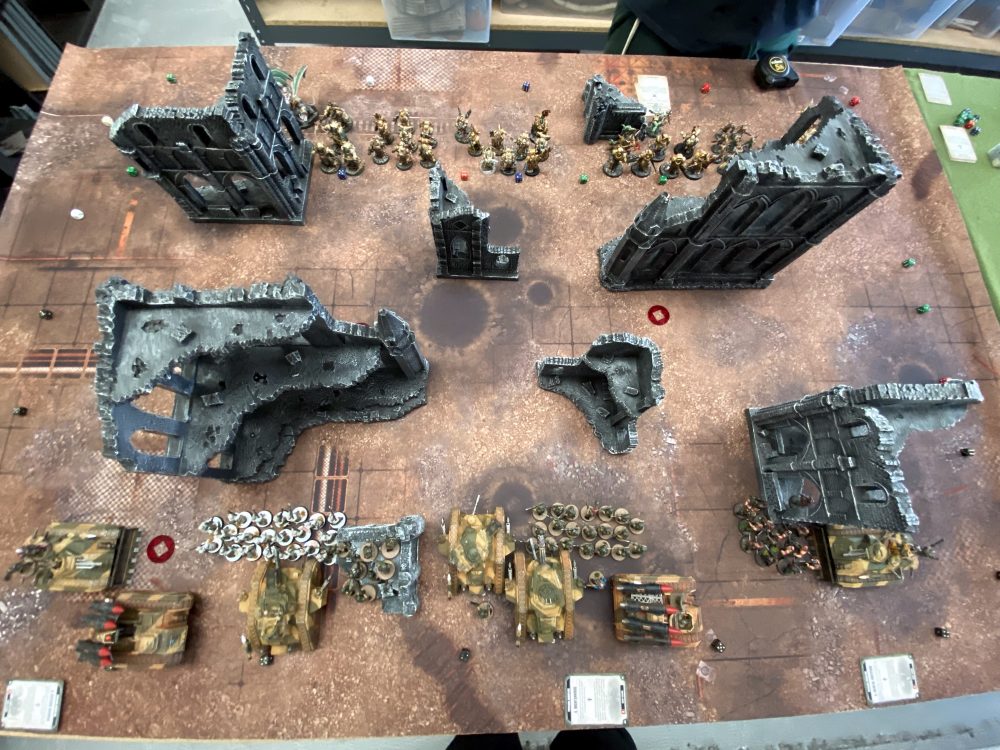 I opted to use the Relic of Lost Cadia right away to maximise my damage output for this first turn, I went first too. I did a little movement to get line-of-sight where I could but that was about it. I kept my Conscripts back and did not Advance them. While good for the Primary, which would start in turn 2, I thought that doing so would be a bad idea as it might allow the Death Guard a turn 1 charge.

My Psychic phase went perfectly I every power went off with no chance of any denials either. This has never happened before!

I then started my shooting and focused one, then the other Manticore, on the Hellbrute – it was the only really long-range firepower the Death Guard had and I could see it sniping a Manticore as soon as it was able to. The flat 3 Damage from Full Payload made such a difference. The Death Guard are now -1 Damage so having flat 3, changed to flat 2, was a big difference from being D3. With the long-range threat dealt with I moved to issues closer to my own front line. I also sniped a Deathshroud with a flat 6 damage Hunker Killer Missile from a Manticore!

My Tank Commanders and a few Lasguns went for the Plague Marines and remaining Deathshroud Terminators. I took one squad of Plague Marines down to two models, killed the other squad and killed the last two Deathshroud Terminators. This opened up the enemy Characters for an attack as the Deathshrouds are bodyguards of sorts and protect nearby characters from being targeted. I had run out of shooting and so that would have to wait until turn 2.

It was time for the Death Guard to come back at me after a rather decent Guard shooting phase. I did not lose any vehicles and lost a handful of Conscripts – which was really lucky for me. Killing so many Plague Marines meant the number of Boltgun shells hitting me was drastically reduced. And, not throwing my guys forward meant that I was somewhat protected by obscuring terrain still.

Finally, the psychic powers I had successfully completed were a big help. 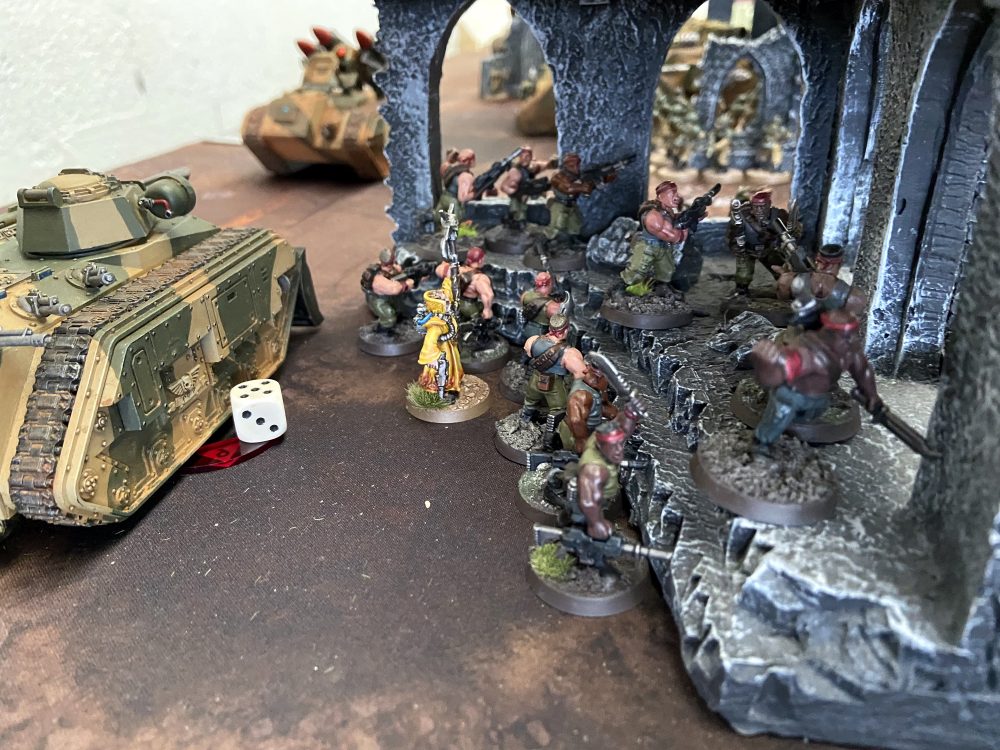 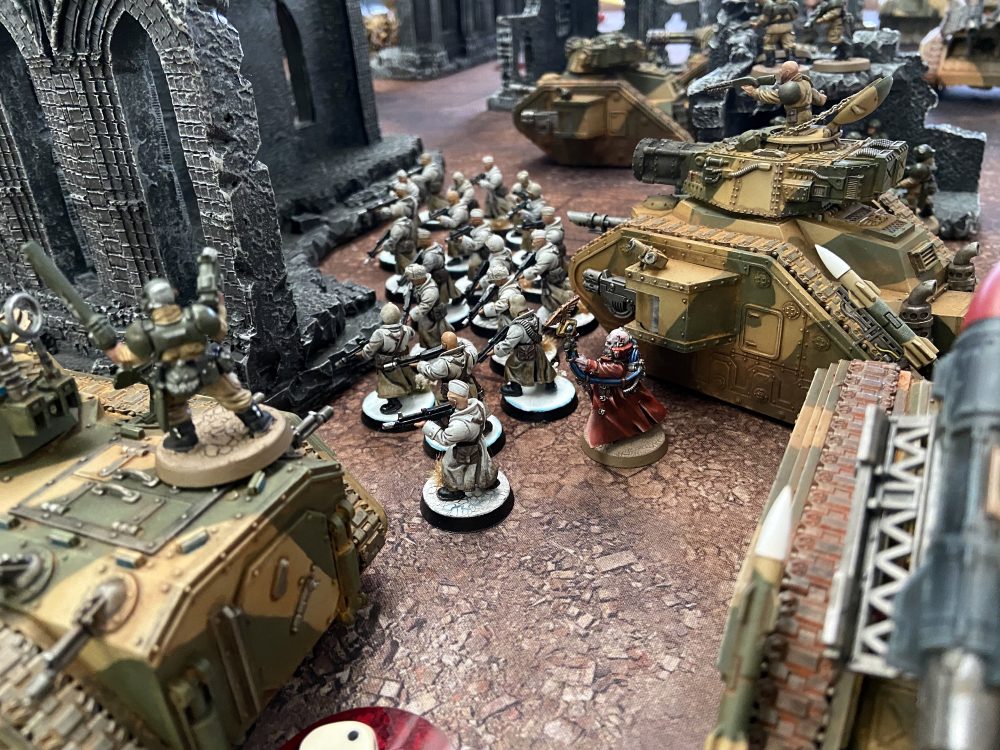 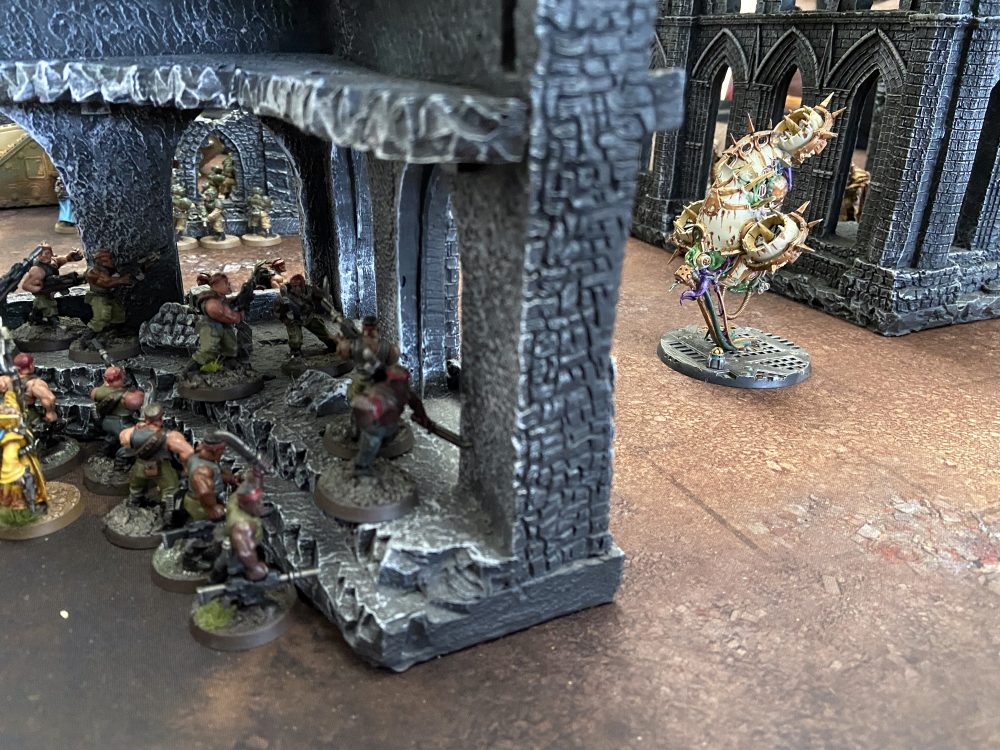 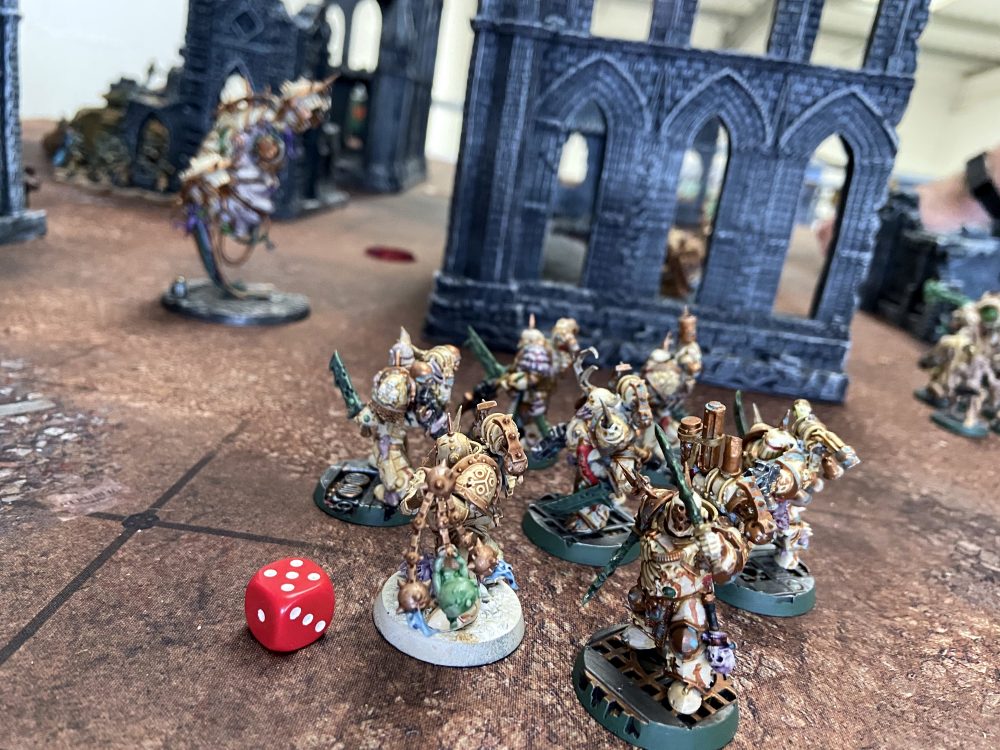 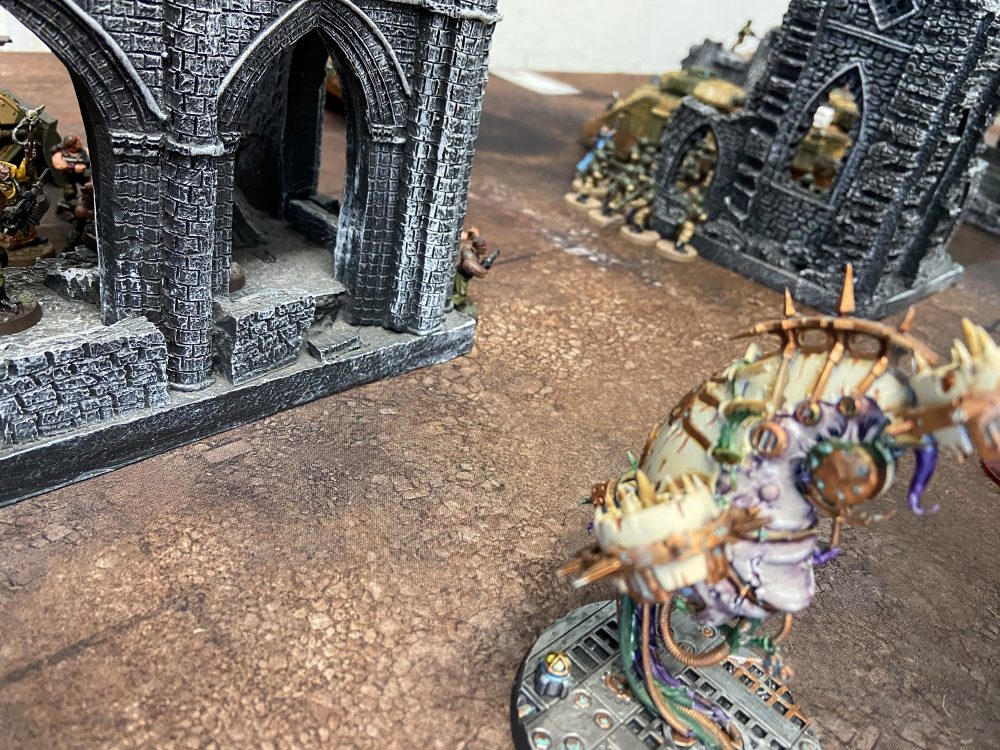 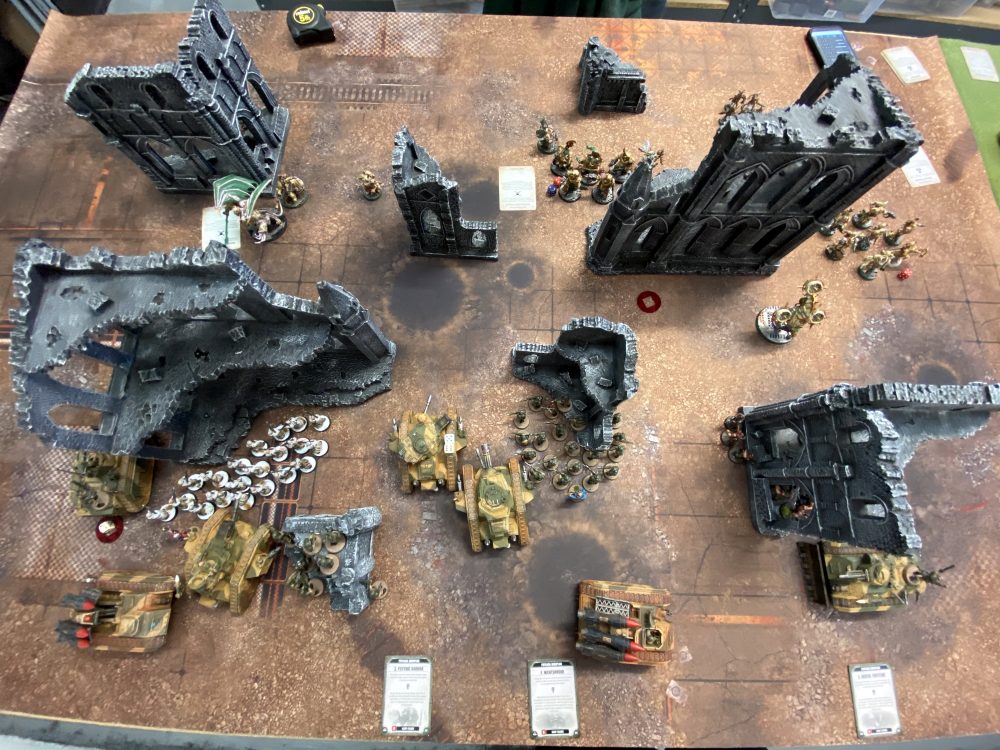 I pushed forward this turn towards the central objectives and to offer a layer of protection from the Death Guard units that were sure to come my way.

My shooting was less effective this turn, in terms of units killed, but I managed to remove the Flying Demon Prince – which felt like a big deal as he would have just ripped through my infantry and Vehicles. My Callidus finished him off with her Leadership based pistol – which was awesome! That did mean that she got chomped on the proceeding Death Guard turn in an act of revenge.

I started on the Blightlord Terminators this turn and removed 3 of the 5.

In their turn, the Death Guard went mainly for my infantry to try and get me off of the objectives, but it was tough going – until it came to the melee combat. A load of characters and the 2 remaining Terminators got into a blob of Conscripts and killed them all with ease, and that also removed me from the objective they were sat on in the centre of the table. This was fine as I was still protecting my Tank Commanders for the To The Last Secondary. 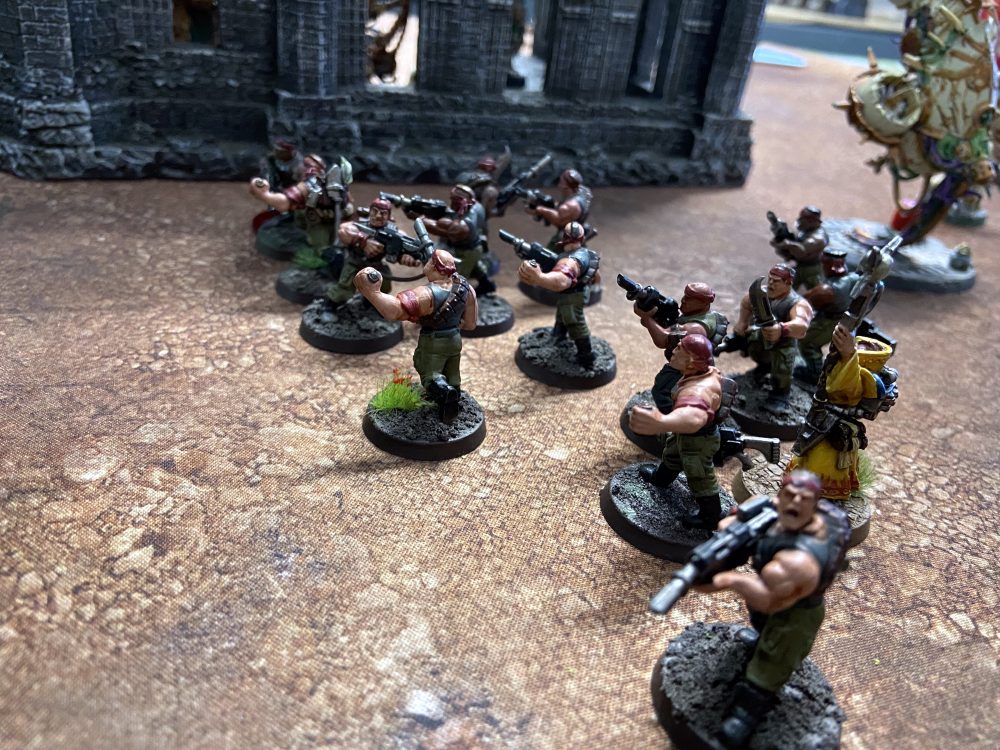 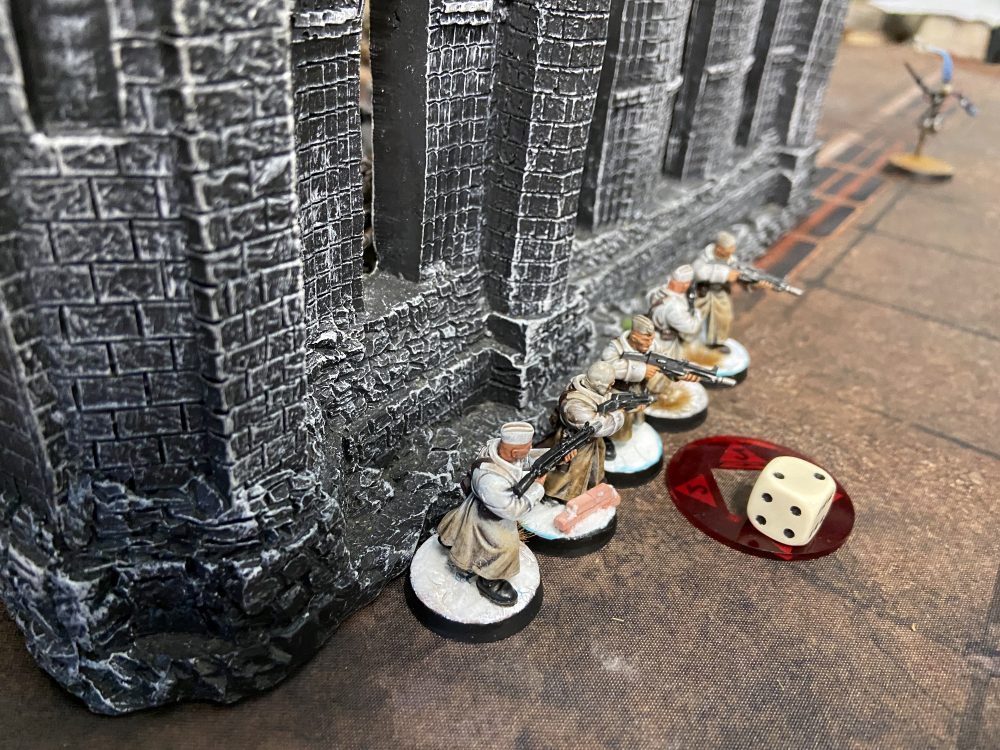 I withdrew some of my models from the enemy characters and successfully split fire a Tank Commander which killed three of the characters in one volley of Demolisher Cannon, Lascannon and Multi Melta firepower.

We called the game at this point as there was no way back for the Death Guard – I would have tabled them on turn 4 I think, or at least only left their Poxwalkers alive which would not be enough to claw back VPs via the primary. I also had all my Tank Commanders alive too – worth 15VPs at the end of the game. 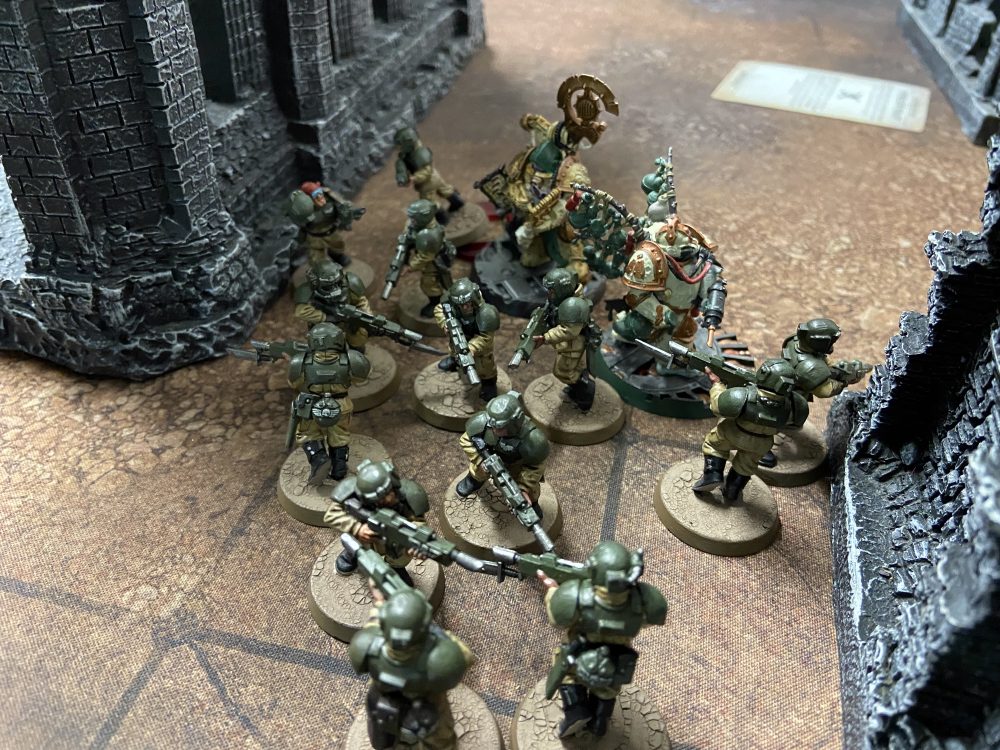 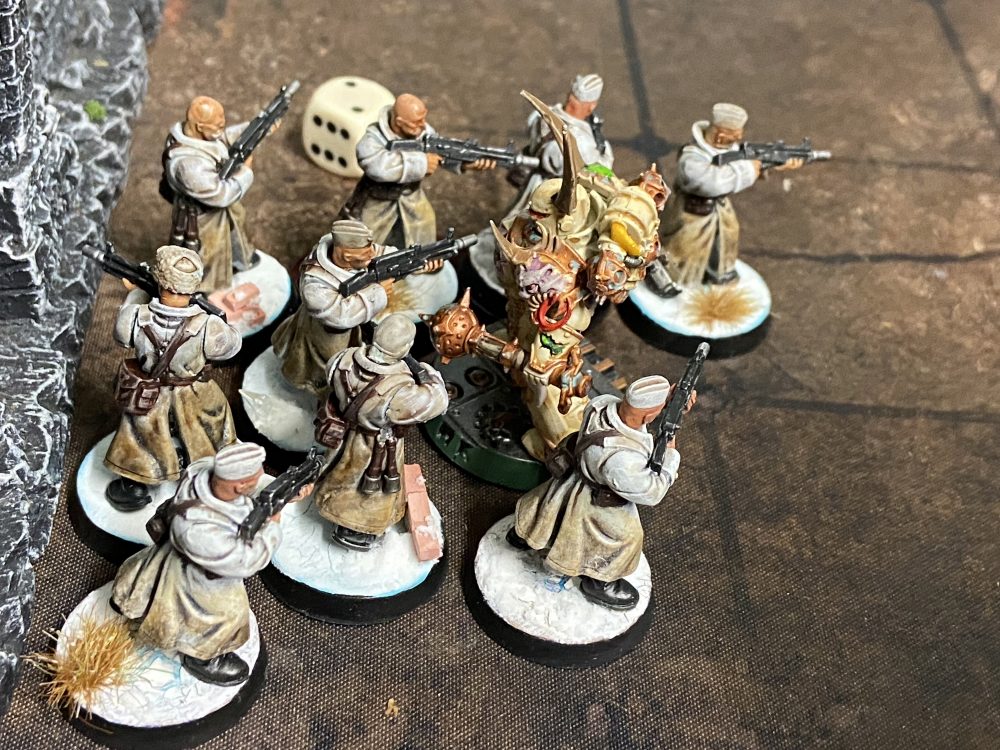 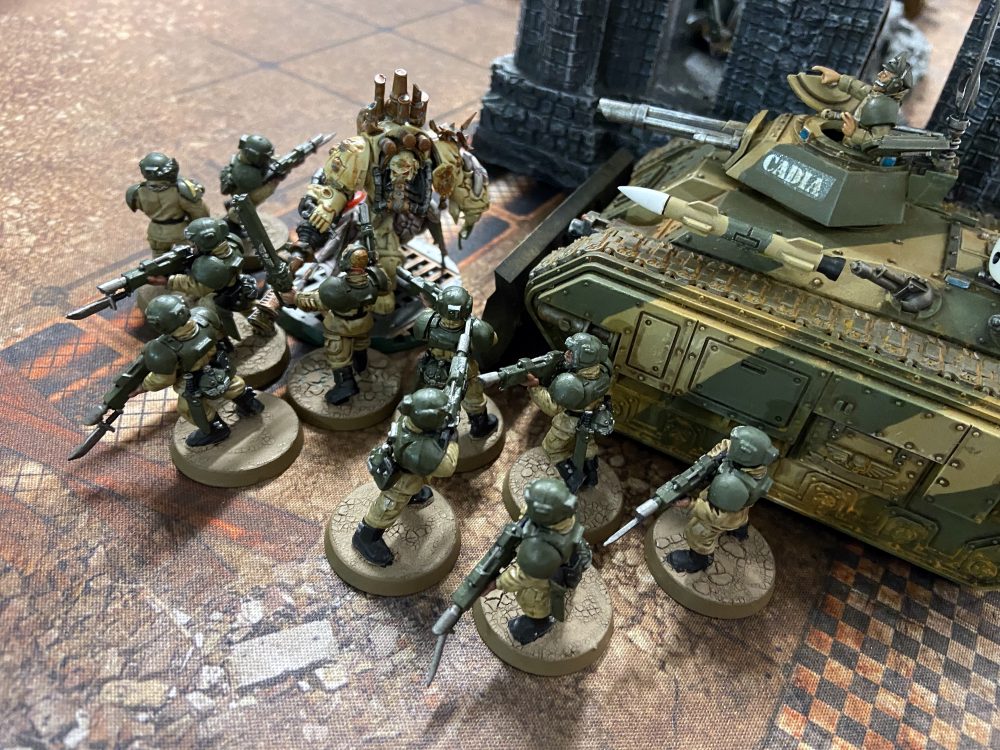 This was a great game for the Guard and it went a lot better than some of my other games against the Death Guard. Ryan was a top opponent to play and I am sure there will be a re-match on the cards in the near future.

The new Disgustingly Resilient rules seem to be better, for me at least! The -1 Damage makes weapons like Heavy Bolters half as effective and it is hard to plink of a Marine with such weapons – the same for Autocannons too I am sure. It really makes you value those high damage weapons like Multi Meltas and Lascannons. If if they are rolling hot then they work really well against the new Disgustingly Resilient.

I am still loving the Conscripts coupled with the powers I took – I want to paint more Cadians to give my Conscripts a more uniform look.

Given another 2 turns my score will have been significantly higher… 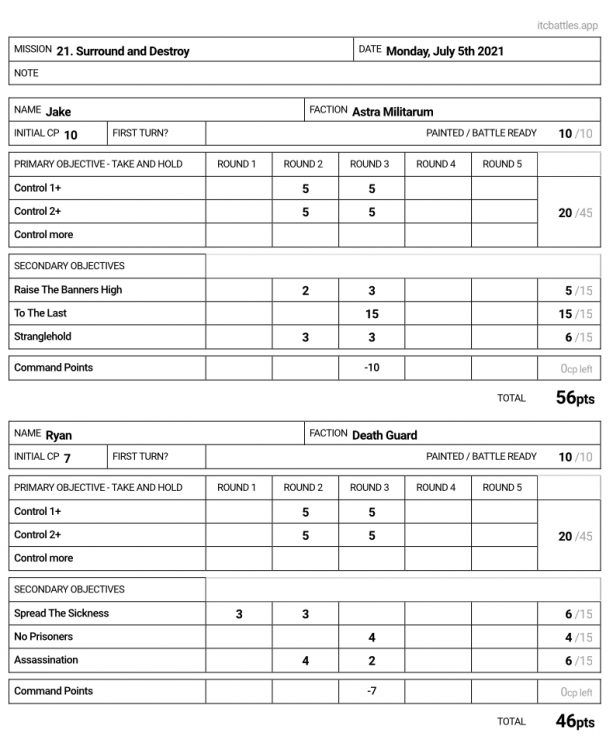