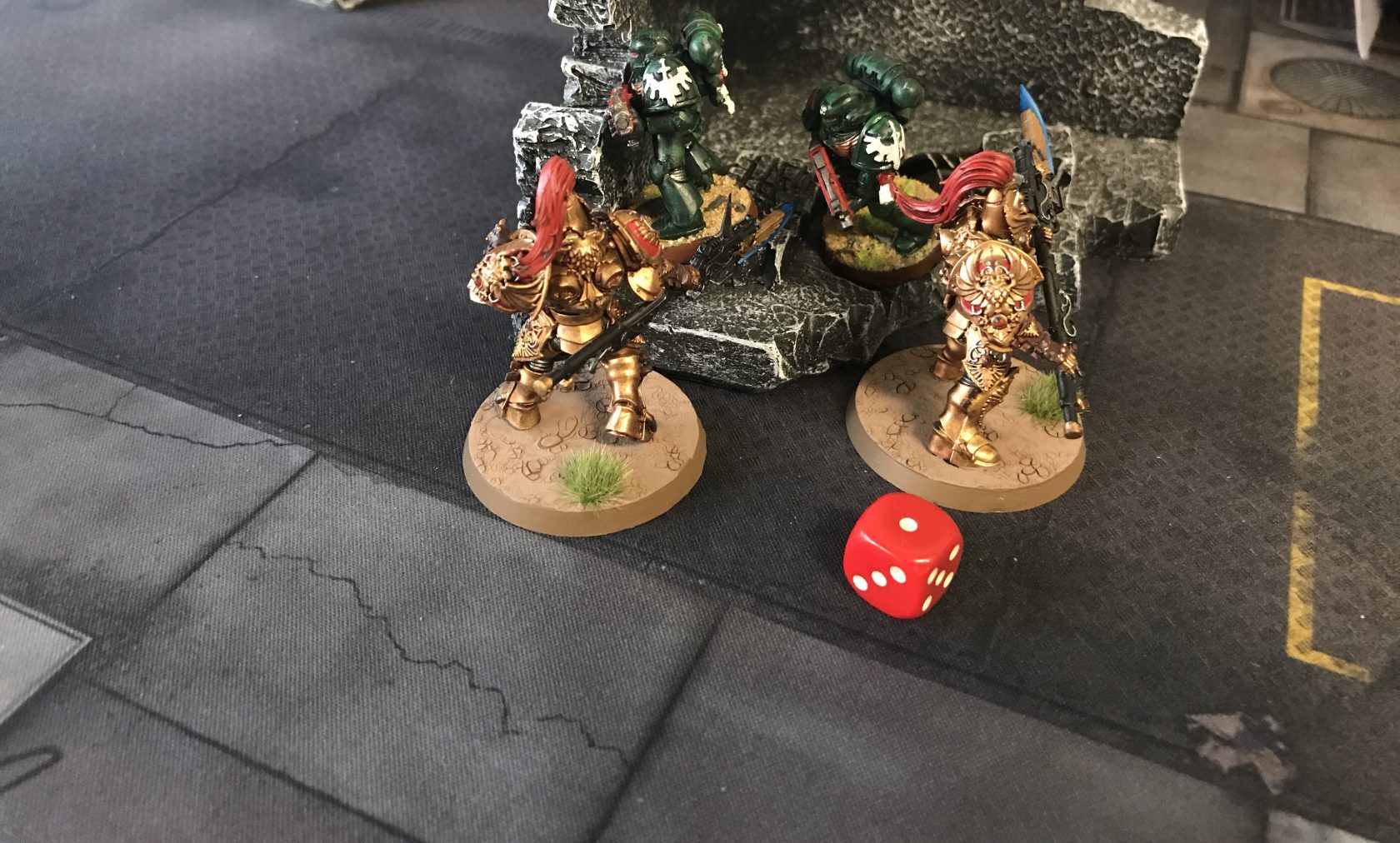 Can the Astra Militarum with Custodian support take down some elite Dark Angels...

It’s been a while since playing the Dark Angels. Mostly I’ve been against my Eldar buddy Greg. But today I’m back to playing Tom and his Dark Angels. This is a battle report of 1,250 points Astra Militarum vs Dark Angels. We played at Boards and Swords on a very nice table. I’ve only played here twice and both times the terrain available has been great. It’s nice to play away from home, fewer distractions and shorter set up and tidy up time.

And here we have the Dark Angels list, a quick rundown:

I covered my list in a previous article – 1,250 points Astra Militarum List vs Dark Angels. I think I messed this up a bit, each of the factions needed to be in its own Detachment to use their own Stratagems. E.g. the Custodians should be in a Patrol and the Vindicare in an Auxillary Detachment with at -1 CP.

We played the Contact Lost mission. I played this last game too, despite it being a random rolled mission. We draw a card on the first turn, then draw cards up to how many objectives we hold at the start of subsequent turns. Hold four objectives, draw cards until you have four. Simples.

I finished deploying first of course but got first turn! Nothing to write home about here, I was evenly spread out down the long battlefield edge as were the Dark Angels. But with far fewer units. 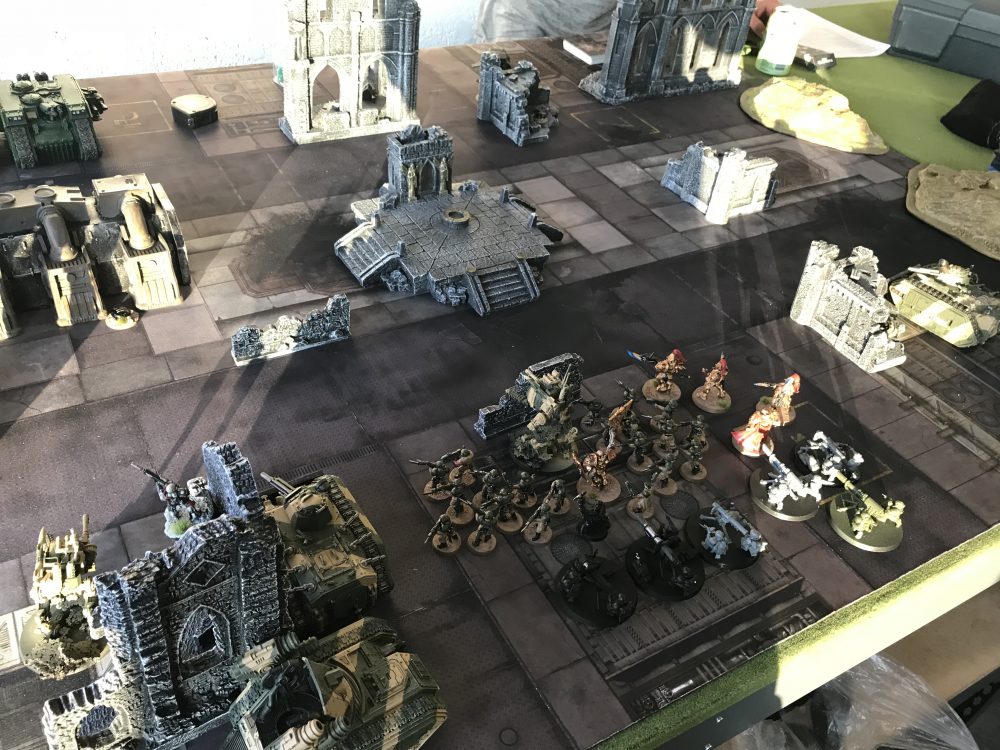 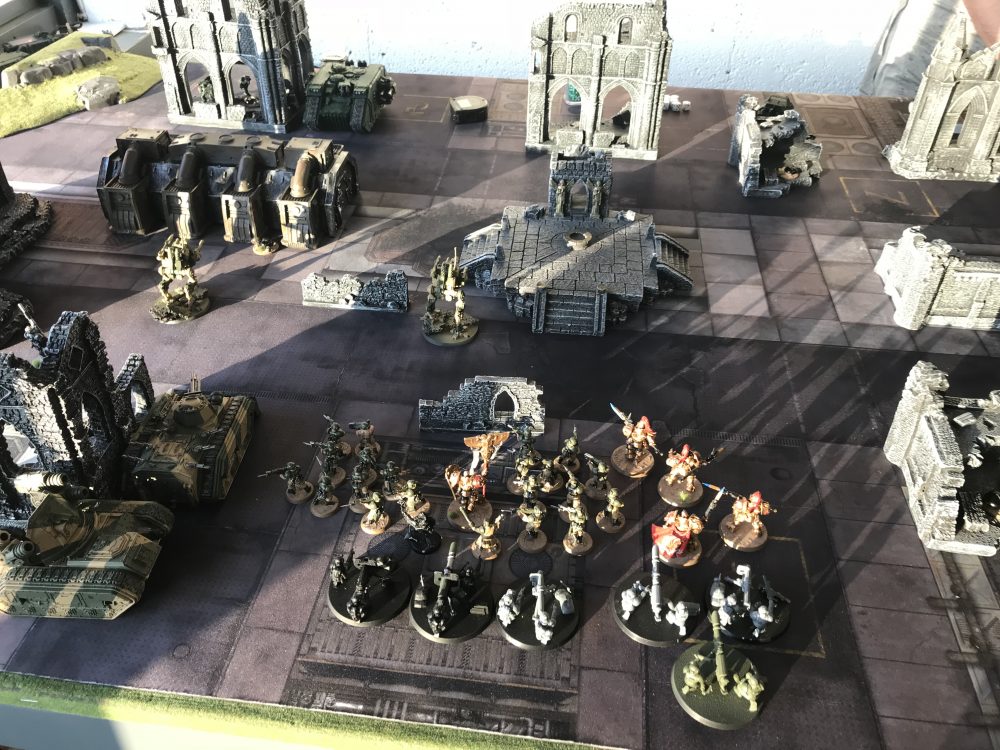 It’s at this point I think my list showed its weakness, which was when I started shooting. It had gone first so my shooting was at its peak. I killed three Inceptors from all my shooting. This was far too little for a fully operational Guard list. And the Autocannons did most of that damage. The Plasmas was out of range or in Chimeras, the Custodians were out of range too. And the Wyvern failed to do enough wounds to force a single failed 3+ to save. Curses! 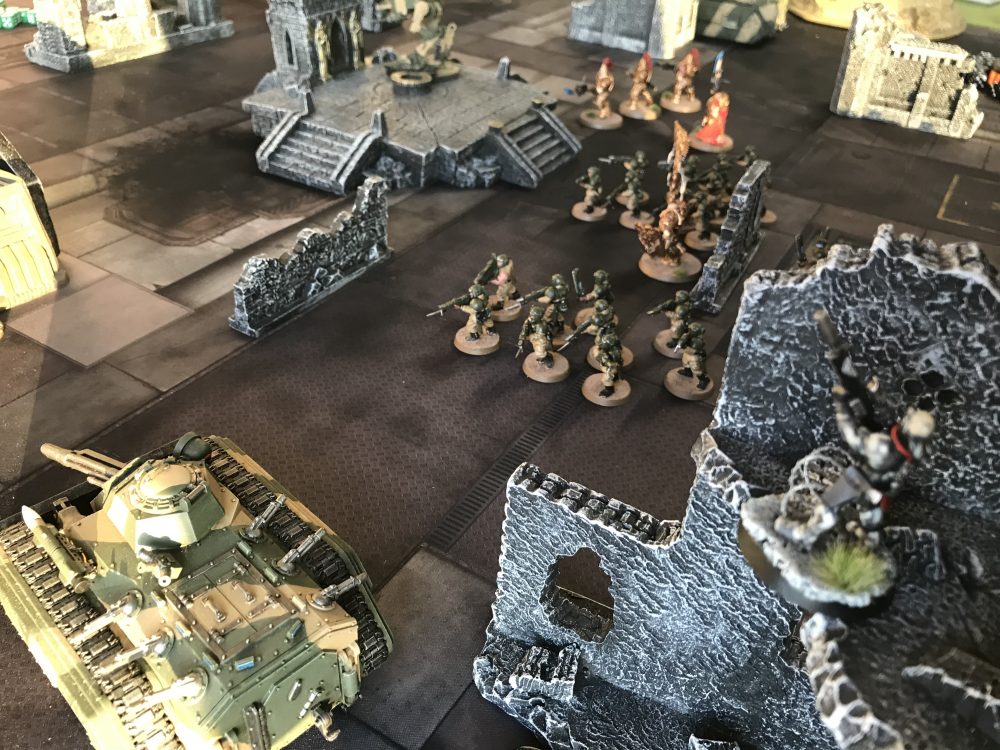 The single card I had was bad for me because it made me target the Intercessors that were on an objective. They weren’t a threat and I should’ve gone for the Inceptors instead because their movement and weapons are deadly versus my Guardsmen. 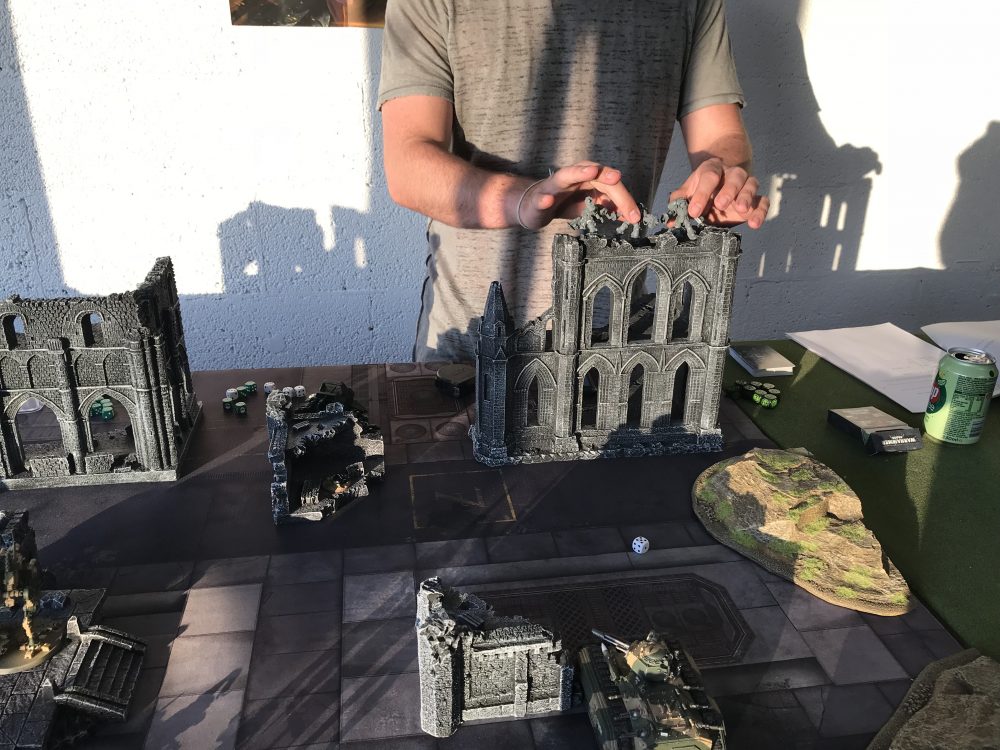 As expected the Dark Angels powdered forward. Helped by their first card which was basically to move out of their deployment zone. Although they had to hang back slightly to remain on the objectives within their deployment zone. But it was just possible to achieve the card while remaining within 3″ of the objectives. With the Repulsor also moving up the middle was going to get busy quickly. 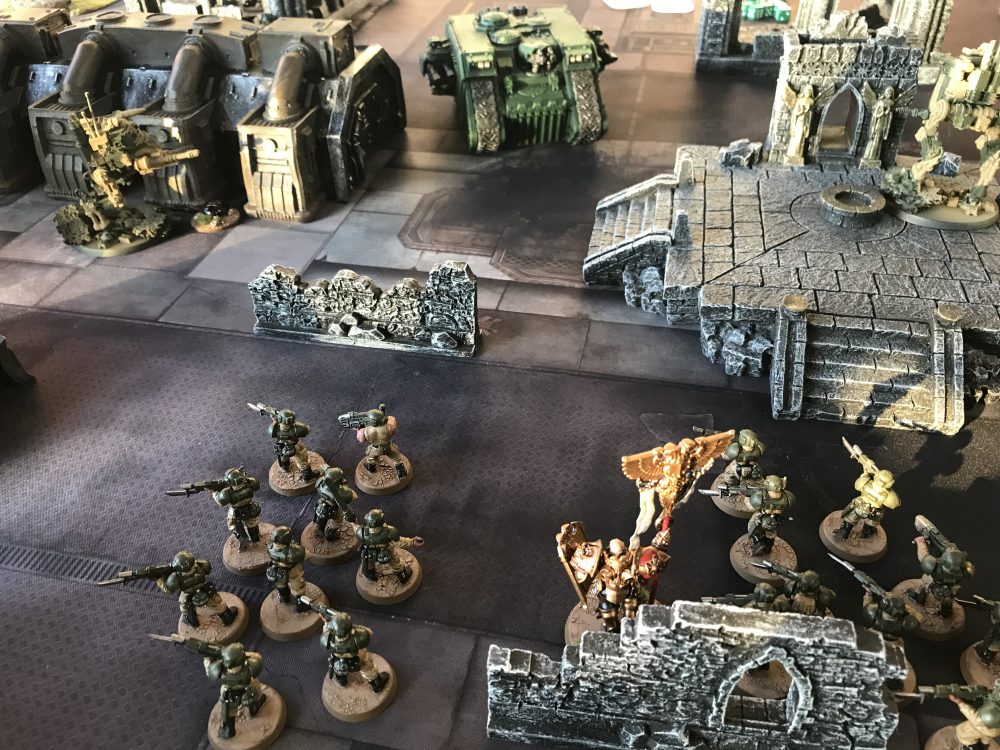 After the Dark Angels shooting there was still no First Blood but I’d lost a Custodian and taken Wounds on my Shield Captain. That 2+ save isn’t so great when you’ve loads of Bolter shots hitting you at -1 AP. A Sentinel has taken a couple of wounds as well.

I really needed to remove more models per turn if I was going to survive this. If the Custodians were being damaged like this then the Guardsmen would be chopped down with ease. 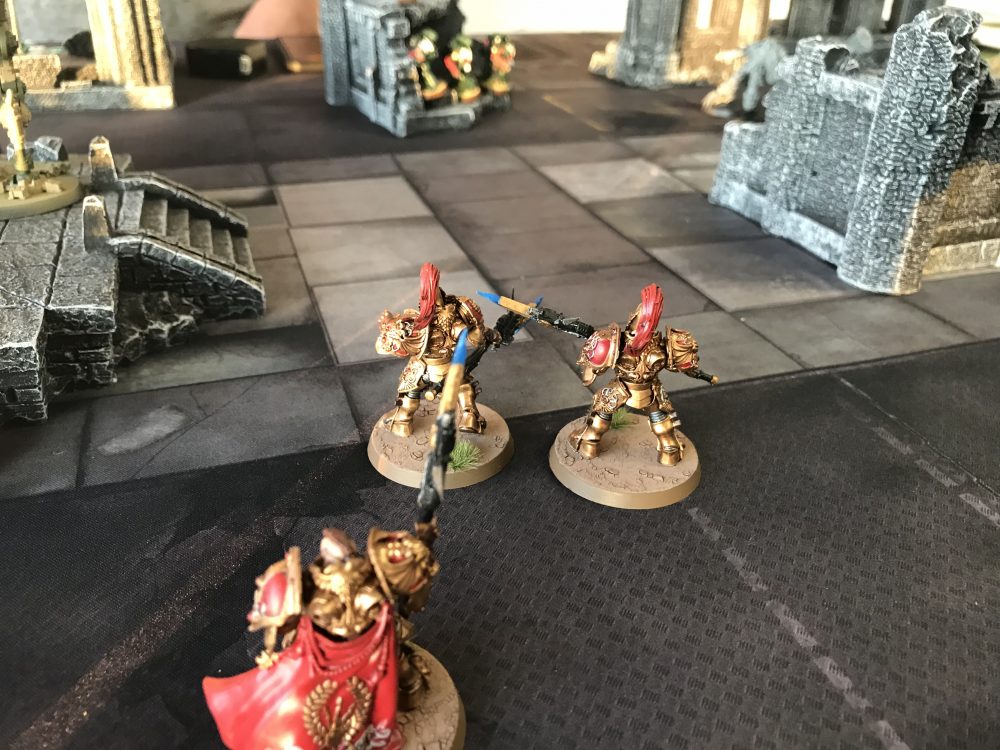 With the Vindicare watching over them, everyone stood their ground and let loose with everything. Note the Vindicare did nearly nothing all game. Maybe he killed a single Inceptor. This always seems to be the case – has anyone ever had a YEAH moment with a Vindicare. The one shot at Strength 5 just seems too underwhelming every game. I do not know how I keep bringing him?! 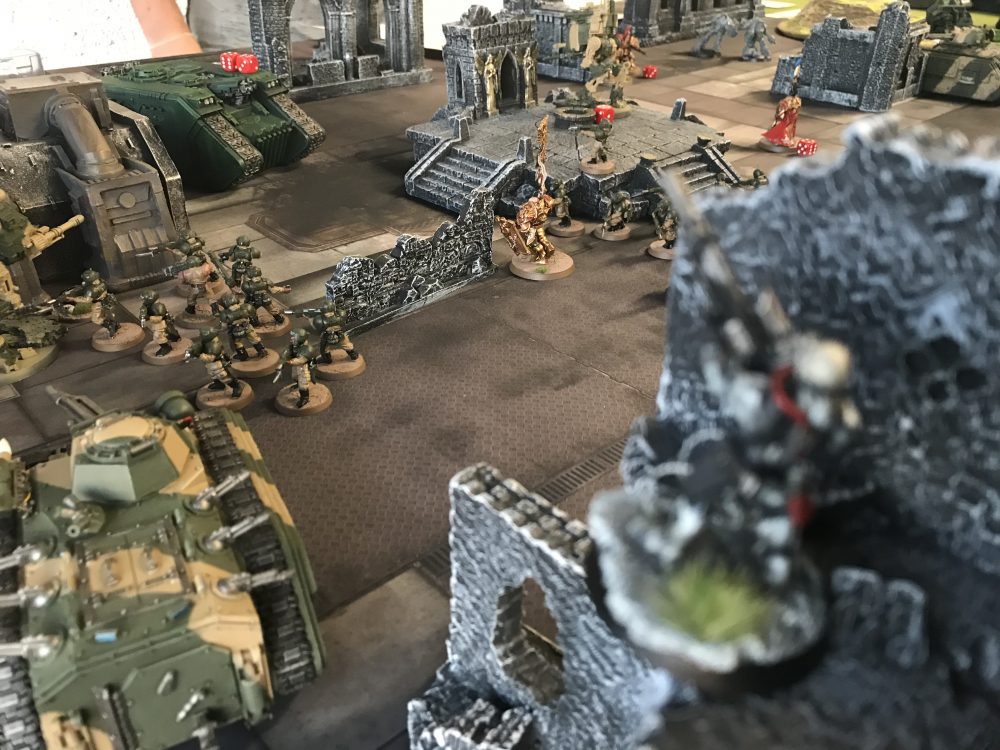 The Vindicare watches over – Astra Militarum vs Dark Angels

The shooting faired a little better this turn. A couple of wounds were stripped from the Repulsor and another Inceptor was killed. This is not good enough though for turn 2 because I still had a lot of Dark Angels to take on; 2 Intercessor Squads, Hellblasters, the Characters, a Land Speeder and a Repulsor. Heck, things are looking bad men!

My Custodians did make it into combat though. With their shooting and charge, they killed 3 of the Primaris Marines on an objective. I was still trying to achieve my first Tactical Objective! 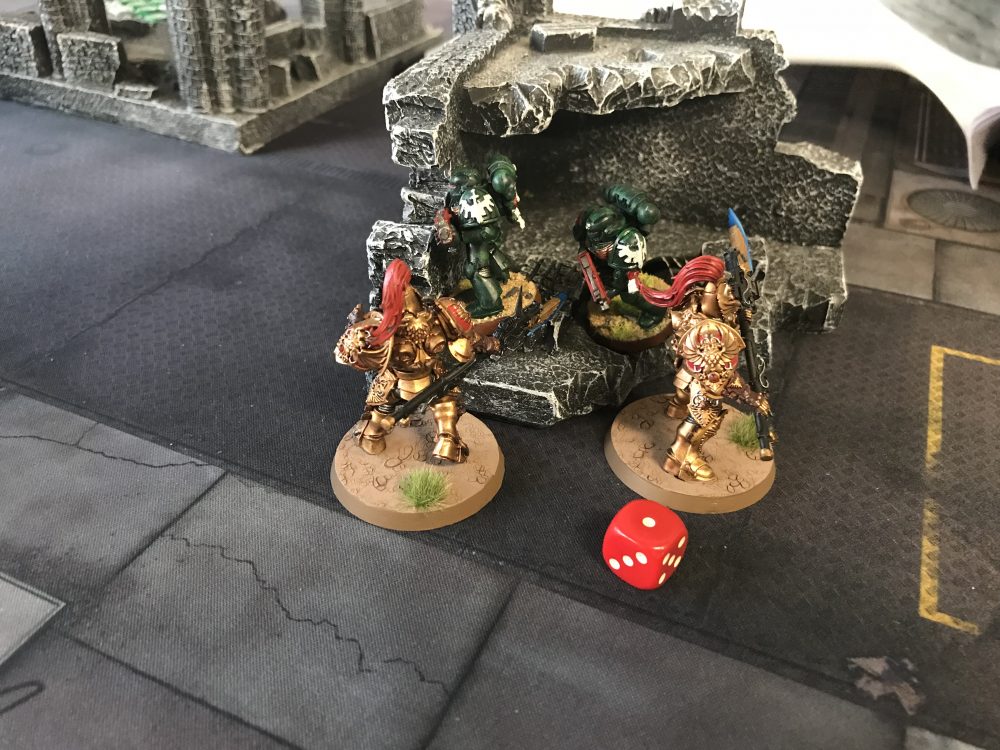 Custodians get into the fight – Astra Militarum vs Dark Angels

And now the Dark Angels cavalry arrives. The Hellblasters and two Characters disembark as the Repulsor moves over everything and sites itself merrily amongst all my units. 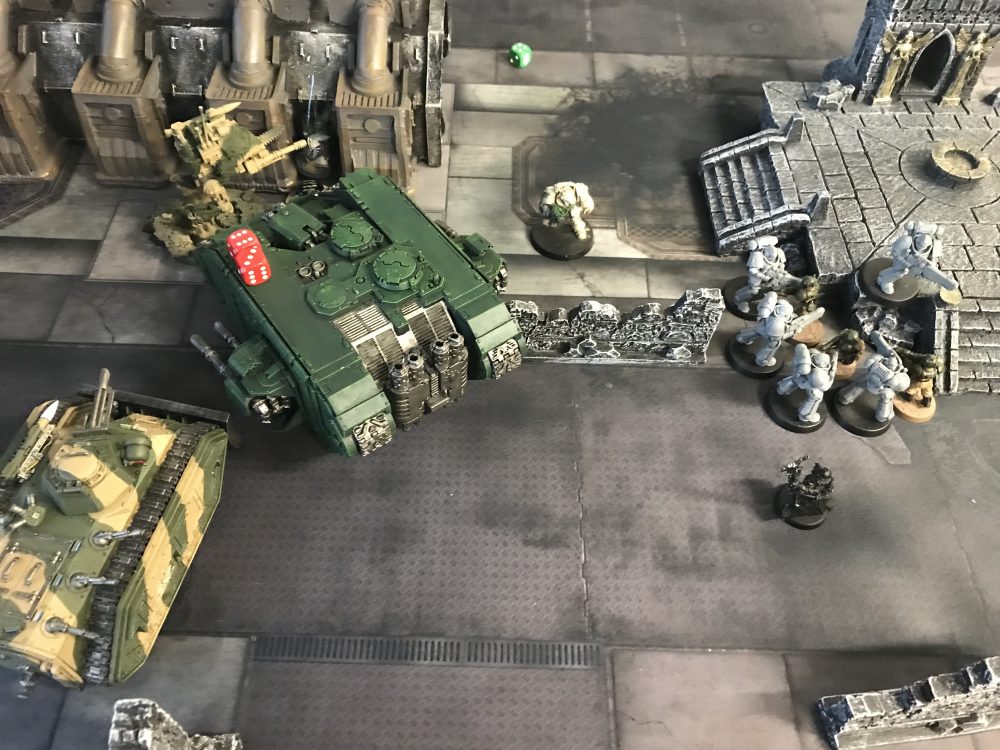 The fight continued between my Custodians and the Intercessors, but one Intercessor remained! Gah! 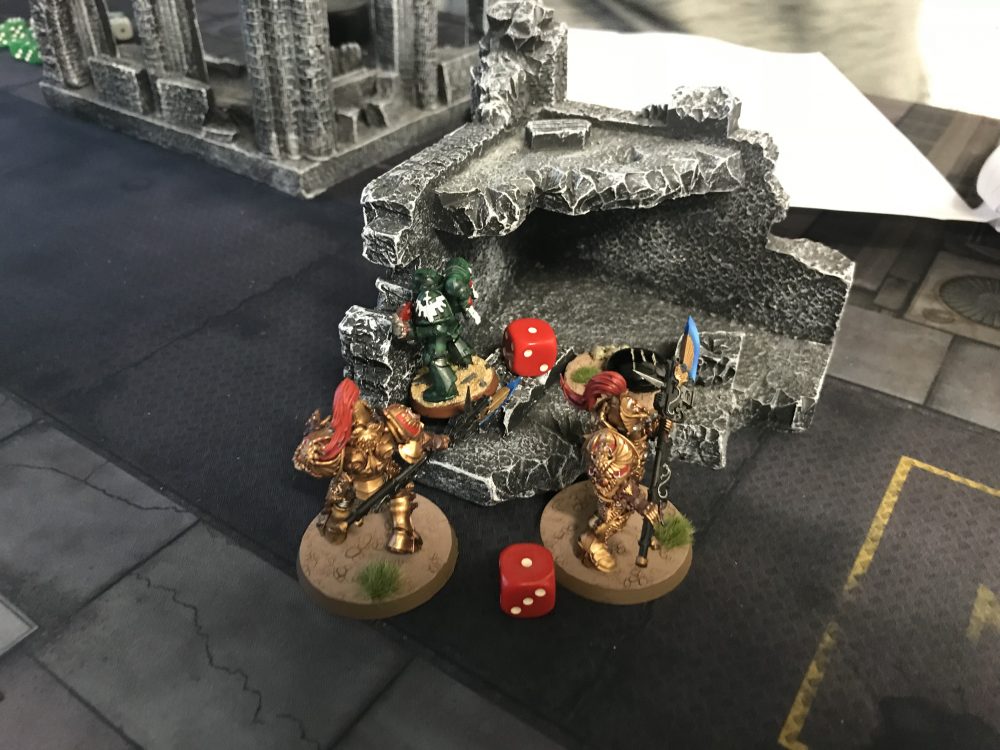 The fight goes on – Astra Militarum vs Dark Angels

The final squad disembarks, but it is probably too little, too late. Their Lasfire and Plasma cut down three and the rest are surrounded. Another wound or two are scrapped off the Repulsor but it makes little difference to the floating fortress. 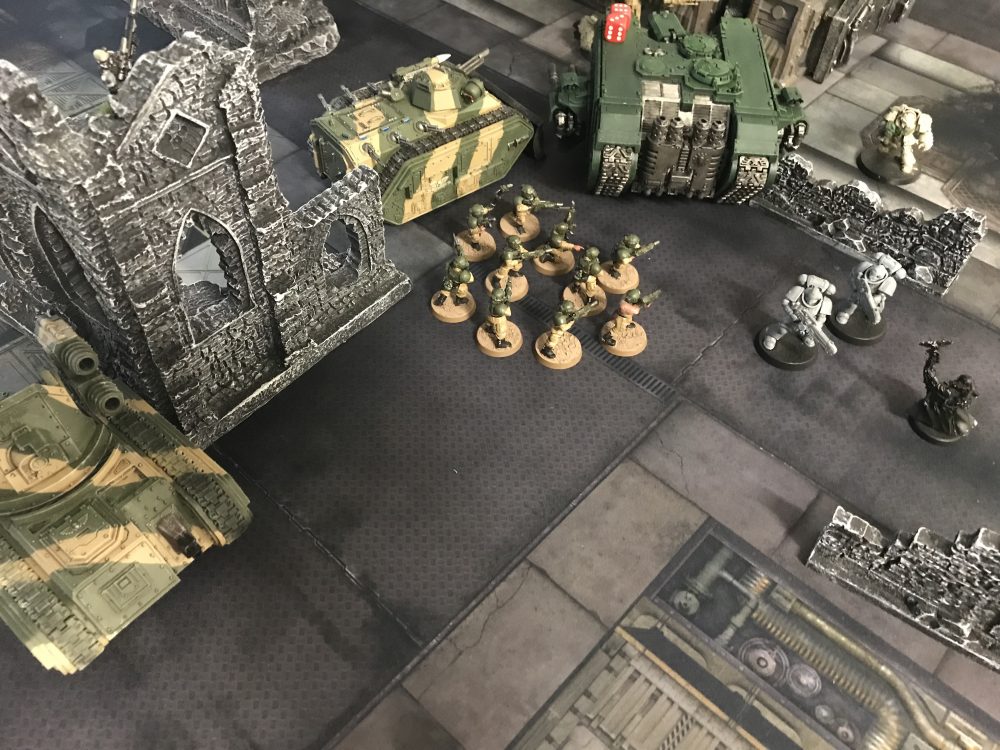 The Shield Captain and Custodians finish off the Intercessors and the last Inceptor allowing them to group. For this many points they’re just too slow. It takes about a turn to shoot them, then another turn to get them into combat. Once they’re in combat they tear through stuff really well. I need more practice with the Golden Boys. 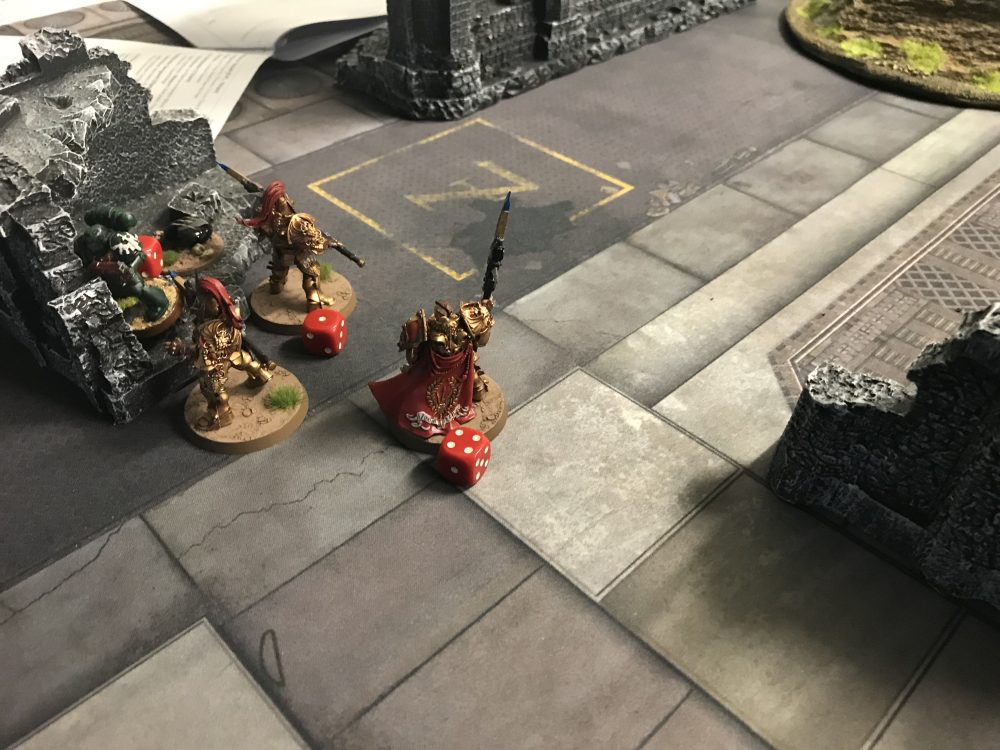 When it comes to Victory Points, the Dark Angels are ahead. Despite being in the centre of the table early and on objectives I wasn’t able to complete the objectives quickly. I also lost First Blood and I’d lost my Warlord. That’s two points right there.

The Dark Angels were ahead 8VPs to my 2VPs. We called the game at this point, a Dark Angels victory. They just steamroller over everything. It seems my strategy of having units that deal 2 Damage didn’t work. At all. 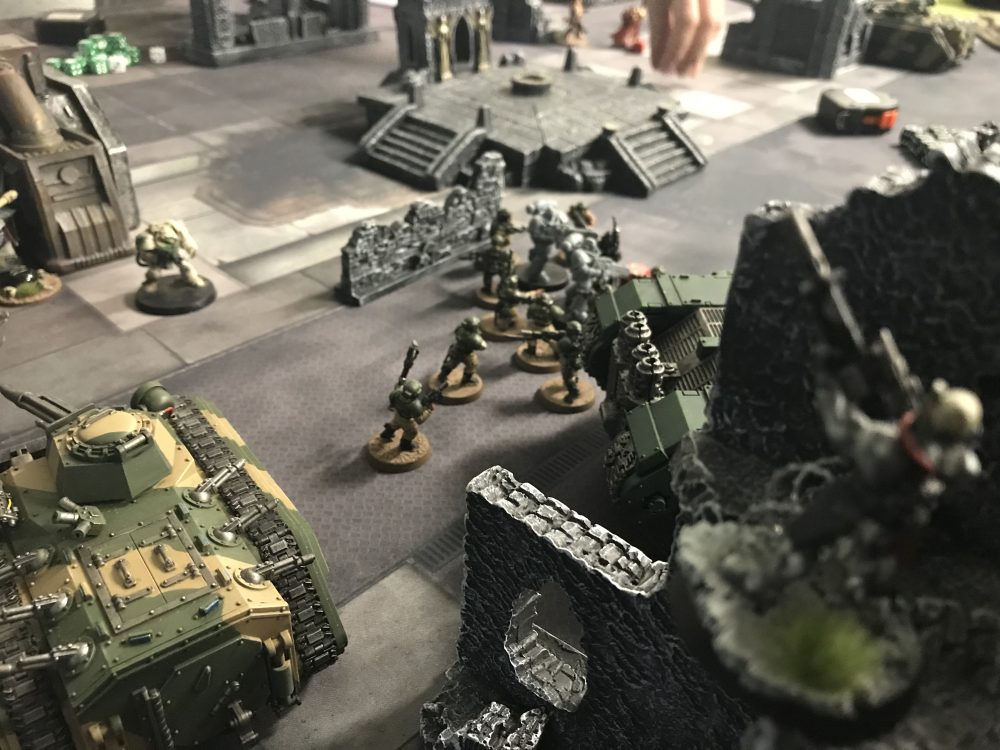 Man of the match – The Repulsor. That thing just keeps on going and killing. When it fired I could’ve gone away and made a drink while all its weapons we resolved. It has so many!

My Autocannons did well against the stuff they could see. Mainly the Inceptors which are 25 points a model. Not bad for Autocannons that cost 54 points for three. But they needed to do more. They needed to be higher and when they move it’s a really big deal as they hit 16.667% less. 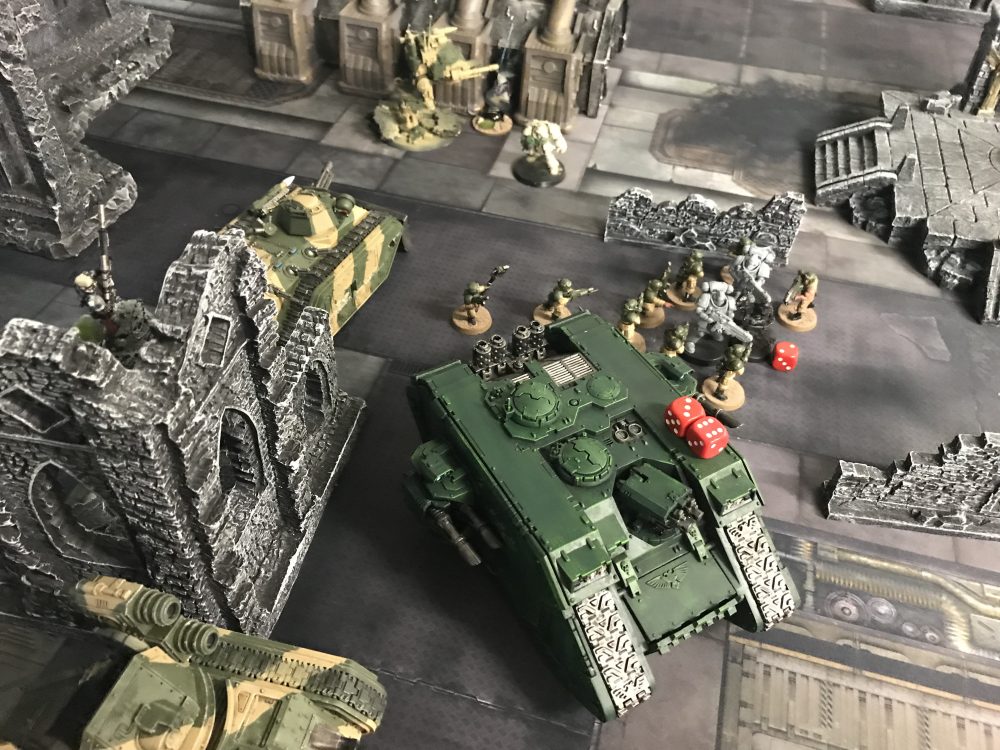 I completed my small challenge from my last article. Which was just to repaint the base rims of my Guardsmen from black to Steel Legion Drab. Which I did. And I based my Custodians. 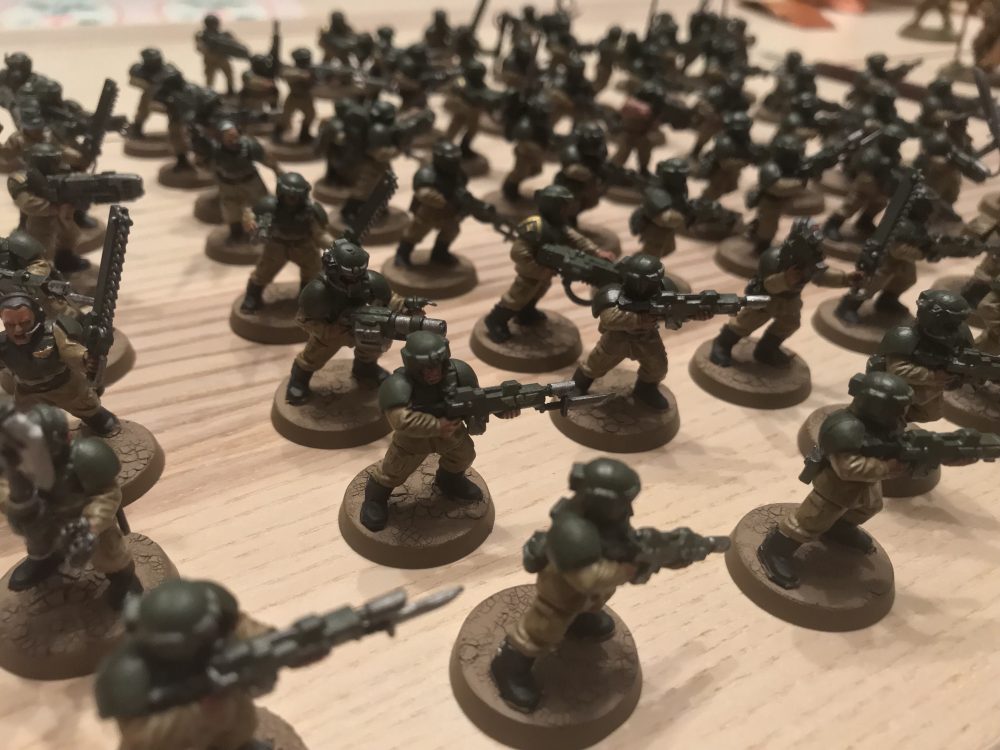 For my next game, I’m going to complete my two Wyverns. 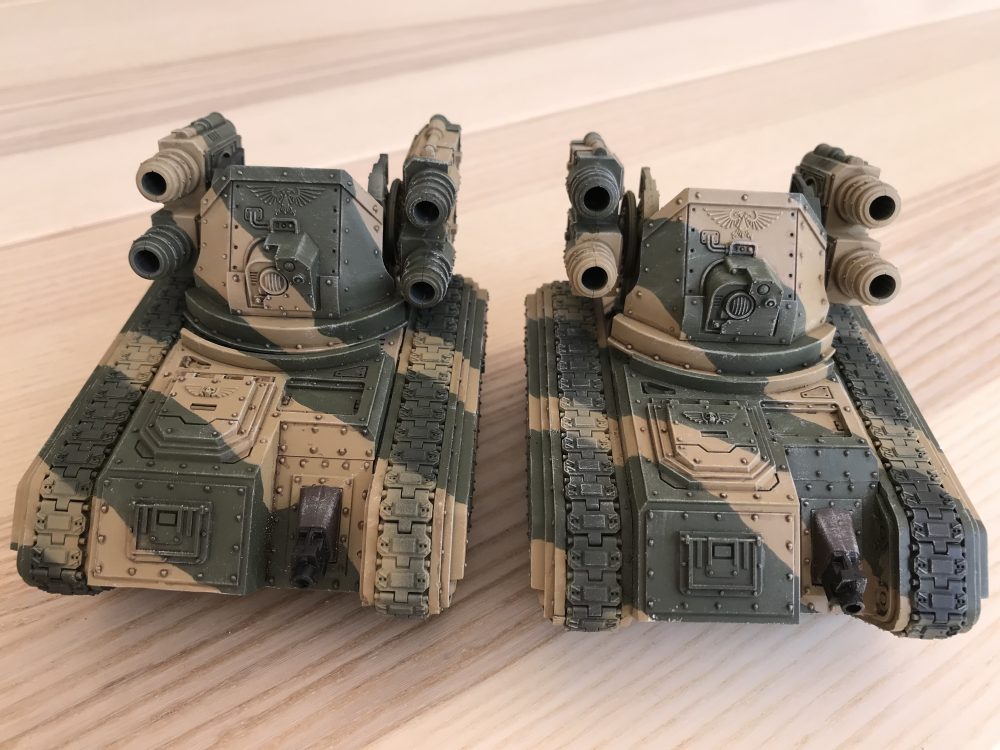 Wyverns to be completed