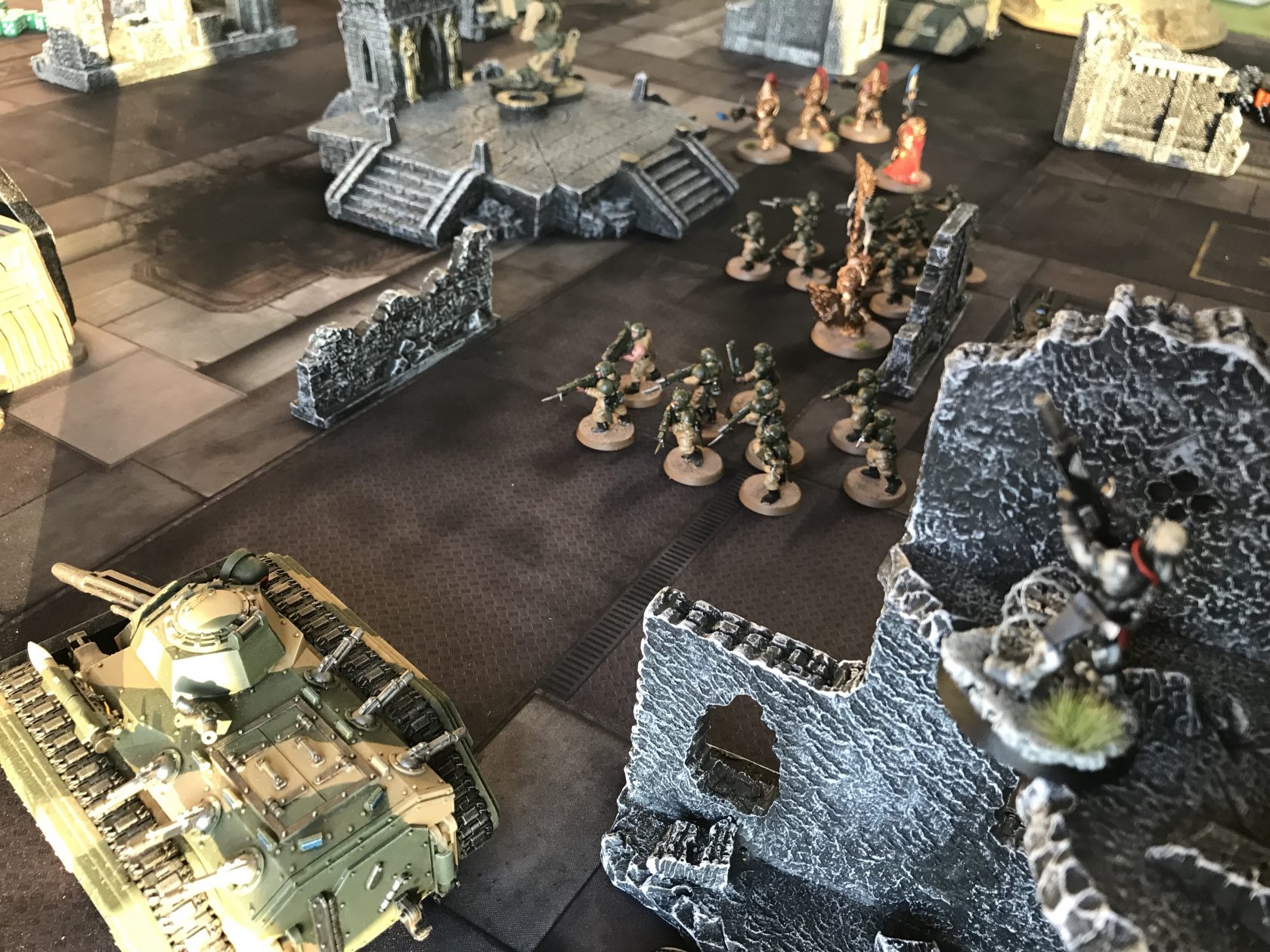 Another day, another list and the prep for another battle. The title says Dark Angels but could be Chaos. But their practically the same anyway, right!? ;-) Its a 1,250 points Astra Militarum List that will be geared towards DA.

I’m unsure what my enemy will bring right now and may not know until the day. A nice surprise. This isn’t a take on all comers list, it’s geared toward taking out Marines and will be OK versus Chaos. It’s mainly geared towards taking down Primaris Marines.

The game will be at Boards and Swords. It’ll be the second time I’ve been there – can’t wait!

Why write these posts?

I wonder this, and if I wonder these things, then others may too…

I really enjoy making lists for a game. I like to think about how the list will play out; it’s weaknesses and its strengths. And how to maximise the positives and minimise the weaknesses.

Maybe others enjoy reading lists, maybe someone gets inspired by a list and maybe someone likes to tear them apart from a tactical point of view. I just like writing them and then sharing them.

Also, it helps me learn the list and think it through. Writing it all out sets it in my mind as I often read a blog post several times before publication. I’m effectively revising my list.

I think I messed this up a bit, each of the factions needed to be in its own Detachment to use their own Stratagems. E.g. the Custodians should be in a Patrol and the Vindicare in an Auxillary Detachment with at -1 CP.

And that’s it, 1,247 points in total. This gives me 8 CPs with my usual ability of gaining them and regenerating them using my Warlord Trait and Kurov’s Aquila.

This list has a total of 32 shots per turn that do 2 Damage. That includes Rapid Firing weapons like the Guardian Spear and Plasma Guns. That should down some Dark Angel Primaris Marines! Or knockout a Chaos Dreadnought or two!

Using those 32 Shots MathHammer says I’d kill 6 Primaris Marines a turn. Using Orders and Overlapping Fields of Fire that goes up to 7. It’s not masses of models but that’s a lot of points and usefulness to lose for a Marine force.

So for this battle I’m really going to try and remember:

And I think that will do. My Heirloom of Conquest, Warlord Trait and Regimental Doctrine needs no revision as they are always the same.

I believe Creed was the first man to say this. What do you think of this 1,250 points Astra Militarum List for taking on Dark Angels? I am looking forward to using the Custodians again, they did not get much use in my last game.