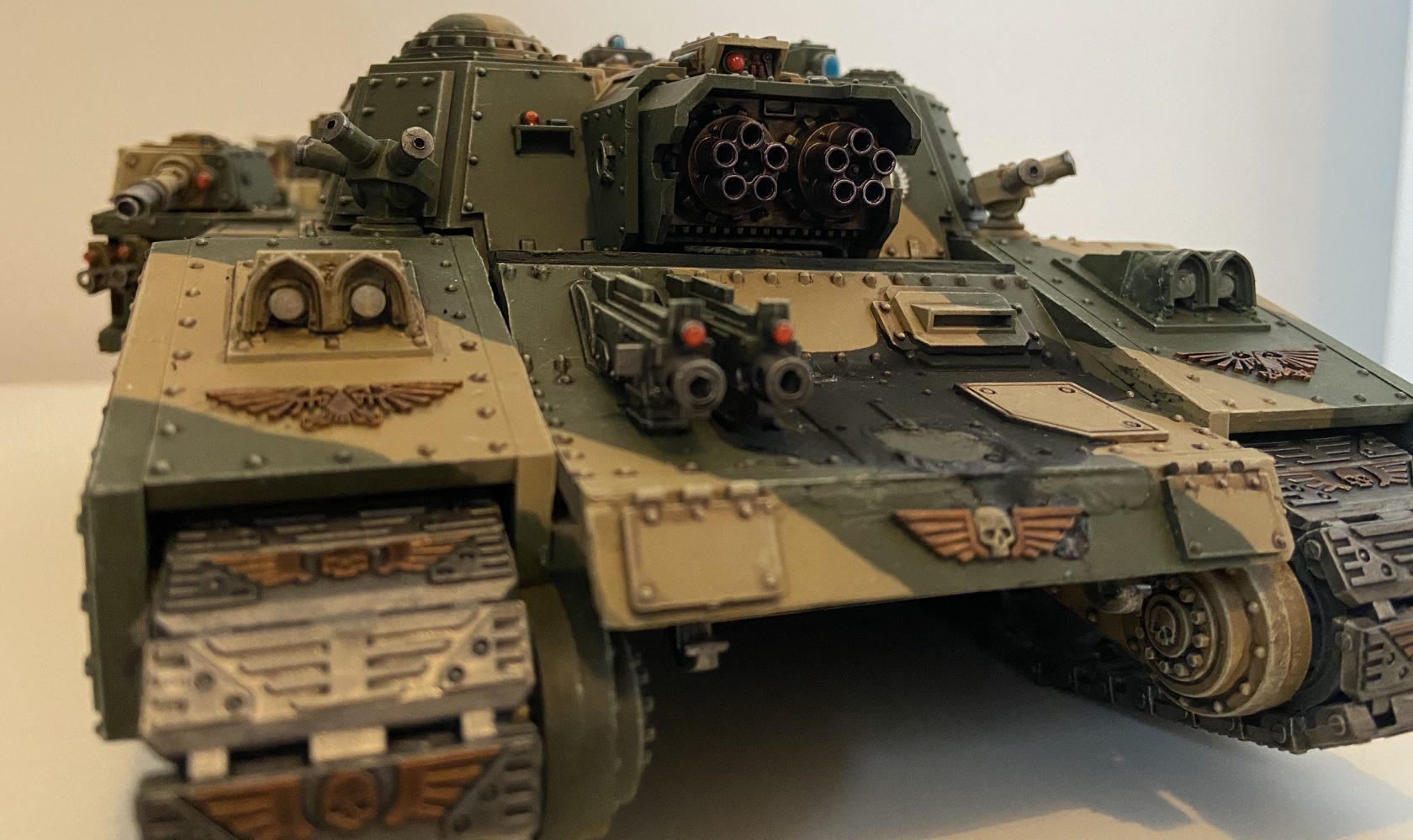 This is the first list I’ve created using the new rules for the Astra Militarum from The Greater Good Psychic Awakening Book, it is my first Astra Militarum Tank Ace list. I’ve taken some of the new doctrines and taken two Tank Aces – one as Tank Commander and one as at Stormlord! This will be used tomorrow – Feb 25th 2020 – against the Eldar.

My total starting CP is 11.

I then need to deduct 3CP for;

I like the way the new Greater Good Book makes you change up your default list builds and auto includes. I usually always take the Grand Strategist Warlord Trait. But I haven’t in this list – I’ve not taken a Warlord Trait and instead will take a Tank Ace. I’ve also taken Gunnery Experts in one detachment so that vehicles can re-roll a single dice for the number of shots per weapon. Usually, I use the Cadian Pound them to Dust order to achieve the same thing. 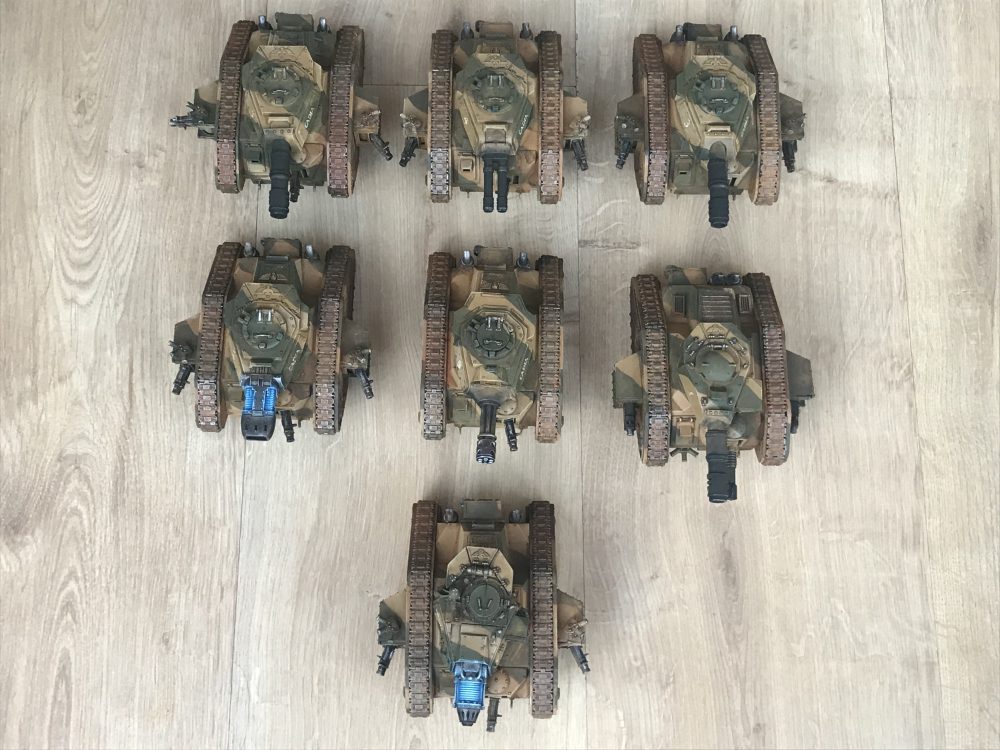 This is a pure Cadian Detachment, no new special doctrines here.

This Battalion is all about the Autocannons. The new Concentrated Fire Stratagem gives a Heavy Weapons Team +1 to wound and +1 to hit. Couple this with either Overlapping Fields of Fire or Aradia’s Psychic Augment for an additional +1 to hit you’re looking at a lot of hits. If I can also use the Bring it Down order too then I’ll get re-roll of ones to wound – that’s a lot of wounds too. Especially if I’m going after Elite style infantry such as Wraithguard – wounds on 2s re-rolling ones.

The AP lets it down though, with just AP-1. Although you could end up with everything hitting and everything wounding.

It’ll be interesting to see how this little combo performs. Even if it’s not Uber powerful, it’s nice to have another tool in the Guard toolbox.

This detachment uses the new doctrines from The Greater Good, Psychic Awakening. I’ve taken Lord’s Approval and Slum Fighters. These will use my Catachan infantry models.

The Slum Fighters and Lord’s Approval combo I talked about before. This little combo of melee should be good at taking out lightly armoured infantry – like Guardians or Rangers 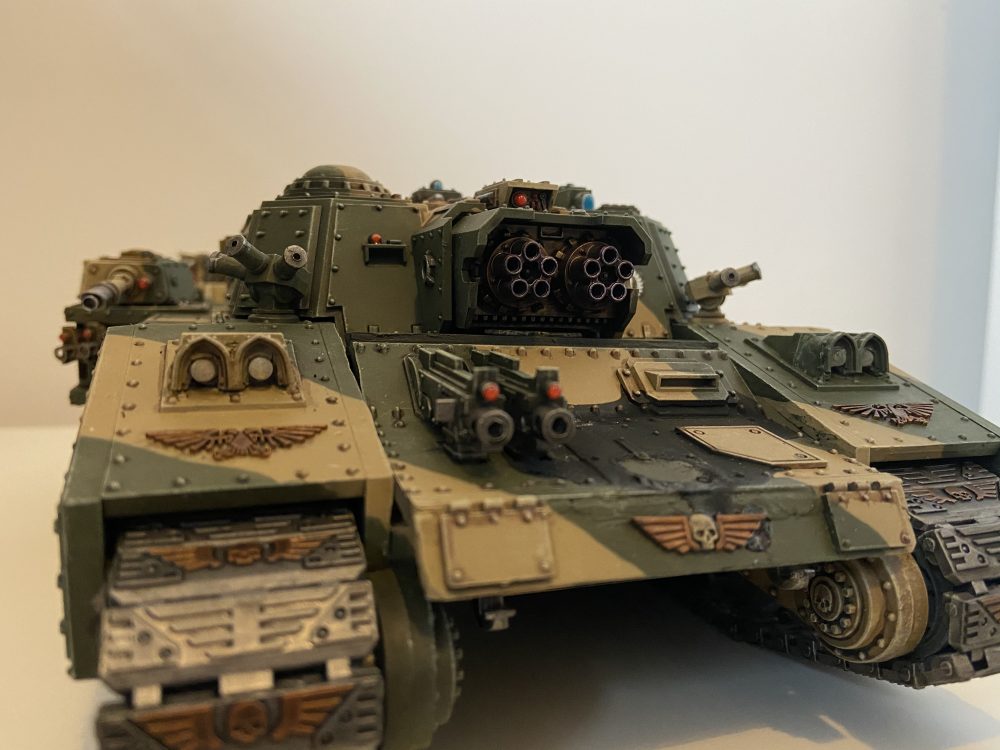 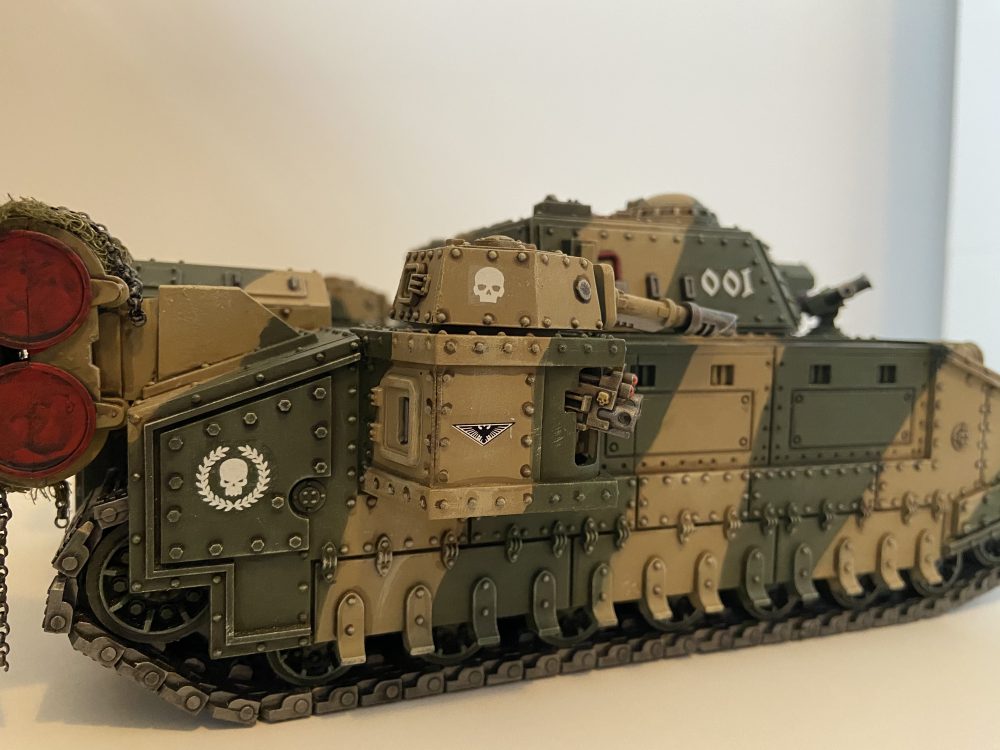 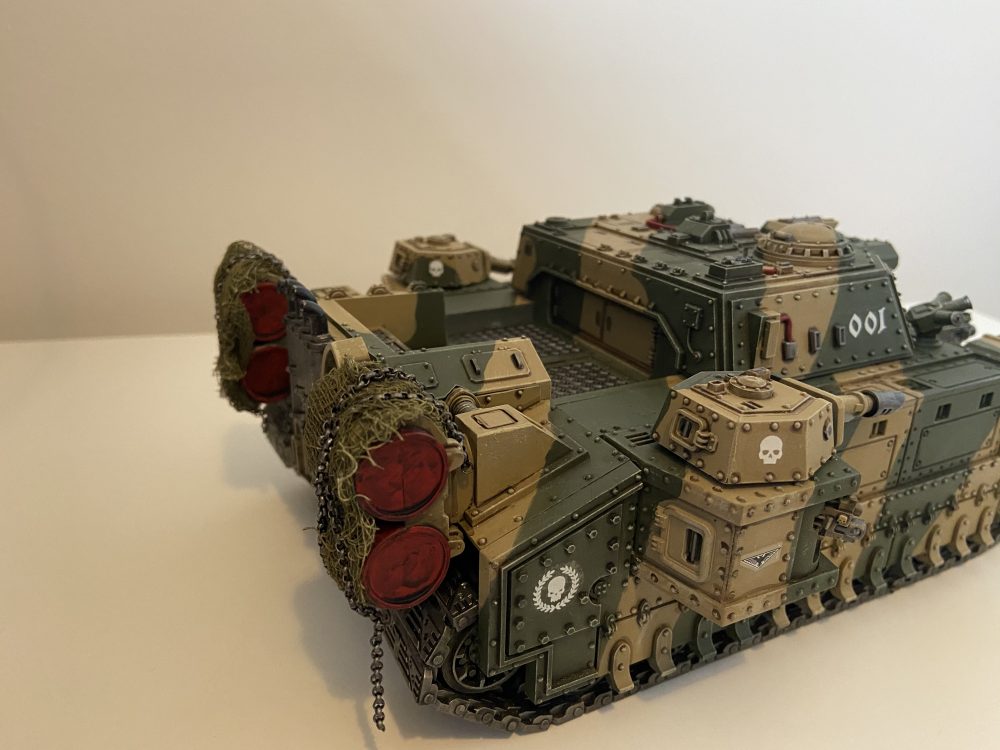 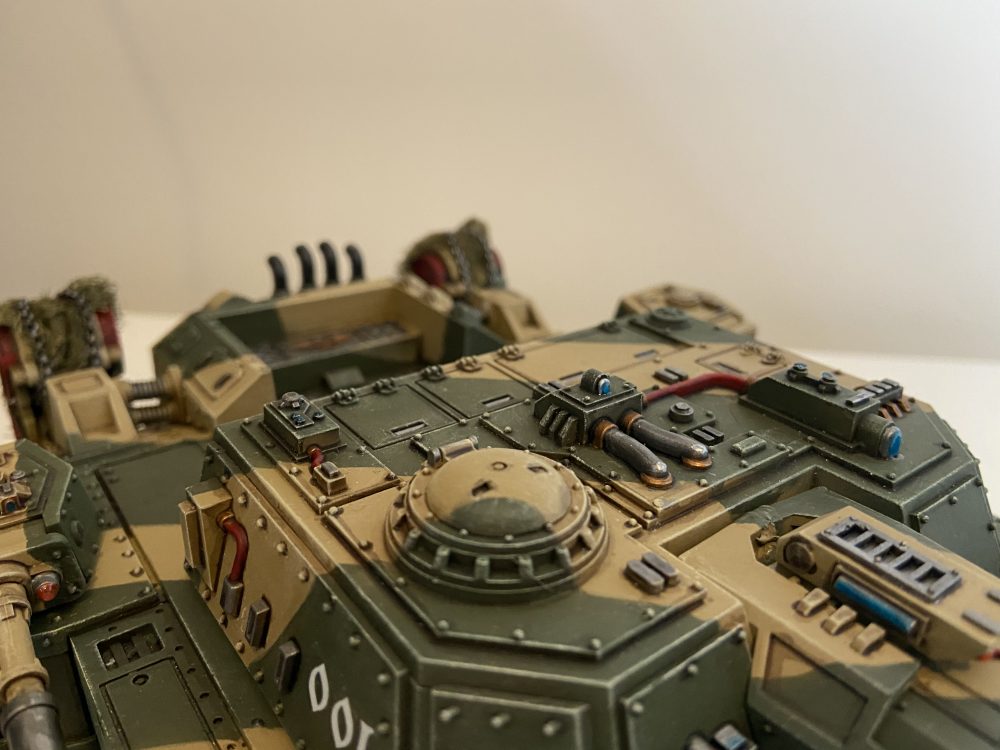 By not taking a Warlord Trait and paying a CP for Tank Ace I can get two Tank Ace abilities. One for the Stormlord and one for a Tank Commander.

Jury-Rigged Repairs allows for some fairly decent repairs; for each vehicle, you roll a D6;

That could be pretty powerful! The Stormlord could gain D3 wounds from Jury-Rigged Repairs and then another D3 from a Tech-Priest and another 1 from the Jury Rigging Stratagem. That is a potential of 7 wounds repaired per turn. This feels like a worthwhile ability to take instead of going pure Cadian. I lose the re-rolls of 1 to hit – but Yarrick can make up for that to some extent. I also lose Overlapping Fields of Fire – but the survivability of the Stormlord (and Tank Commanders) could well make up for that.

Having a Tank Commander alive for a whole extra turn on the top stat-line is worth a single BS gain that costs 2CP.

Coupled with Gunnery Experts I can re-roll a single dice for the random number of shots per weapon. On these Tank Commanders that means every shot is re-rollable for the number of shots.

This will make for some fairly decent firepower I hope.

This Tank Commander will be running at an extra AP for its turret weapon only (thanks Alix in the comments). So now the Hammer of Sunderance Battle Cannon is AP-3 and not AP-2.

Inside the Stormlord will be the following 38 models;

The Tank Ace ability, Inspiring Might allows all Astra Militarum units within 6″ to roll two D6 for Morale Checks and discard one result.

This is obviously meant to save models by discarding the highest result. But you could discard the lowest result and keep a higher result. That might be handy, but circumstantial, for wiping a unit out on purpose to free up an enemy unit that’s wrapped an infantry squad. Circumstantial, but interesting.

So we have a lot of models inside the Stormlord that are focused on melee, including the Slum Fighters with Lord’s Approval. 20 of these models can fire from inside the Stormlord – which is something I have never been able to do in 8th Edition now the Chimera does not allow it.

It will be pretty incredible to shoot the three Flamers, Plasma Pistols, Yarrick and then 14 Lasguns into enemy models. But I cannot benefit from orders or psychic powers while embarked in the Stormlord – nor Yarrick’s re-roll of ones. They will be safe from enemy fire though and their weak Toughness 3 bodies will be behind a wall of 26 Wounds at Toughness 8 with a 3+ Save.

And that is it! Wish me luck against the Eldar tomorrow!