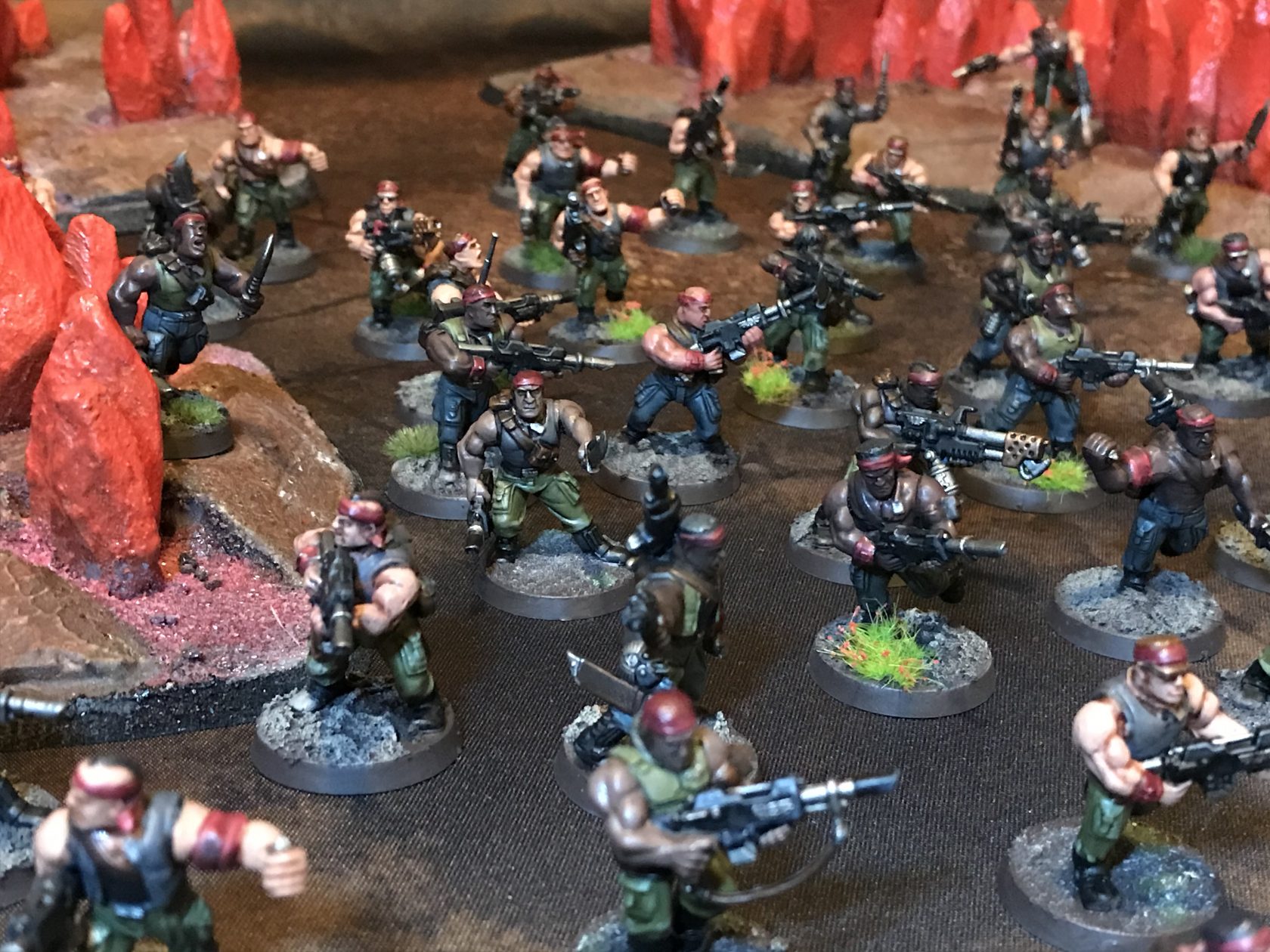 During my latest list build, I came across a curious relationship between two of the new doctrines – Slum Fighters and Lord’s Approval – and the Catachan. I thought it worth sharing briefly.

What I found interesting is how these two melee-focused doctrines are just a little better than the Strength 4 that Catachans get vs Toughness 3 enemies. Maybe this is by design?

Using Catachans, half will hit and then two thirds will wound with Strength 4 vs Toughness was 3. Let us assume the enemy has a 5+ Save and they’ll save another third of the wounds.

Using the Lord’s Approval and Slum Fighters things pan out a little differently.

We lose the extra Strength but gain two abilities elsewhere. Half still hit but we gain an extra sixth of hits from 6s, we then wound on 4s – so half wound.

But once we have those wounds, Lord’s Approval kicks in and we gain an extra AP. The enemy will then fail an extra sixth of their saves because of this additional AP. This gives us a sixth more dead models, on average when compared against Catachans.

This new setup up even ends up with more dead models against Toughness 4 enemies because you’re gaining on hits and AP.

The outcome is the same if the enemy has an Invulnerable Save they’re using. As the extra AP counts for nothing.

It’s a minor boon over the Catachan and since we have no Catachan vehicles in this Detachment the lost re-rolls on vehicles isn’t missed. We also lose the Flamer order – which is awful and I’ve never used so that’s not missed either. So this setup might be my default build for Catachans in the future – if I take no vehicles. 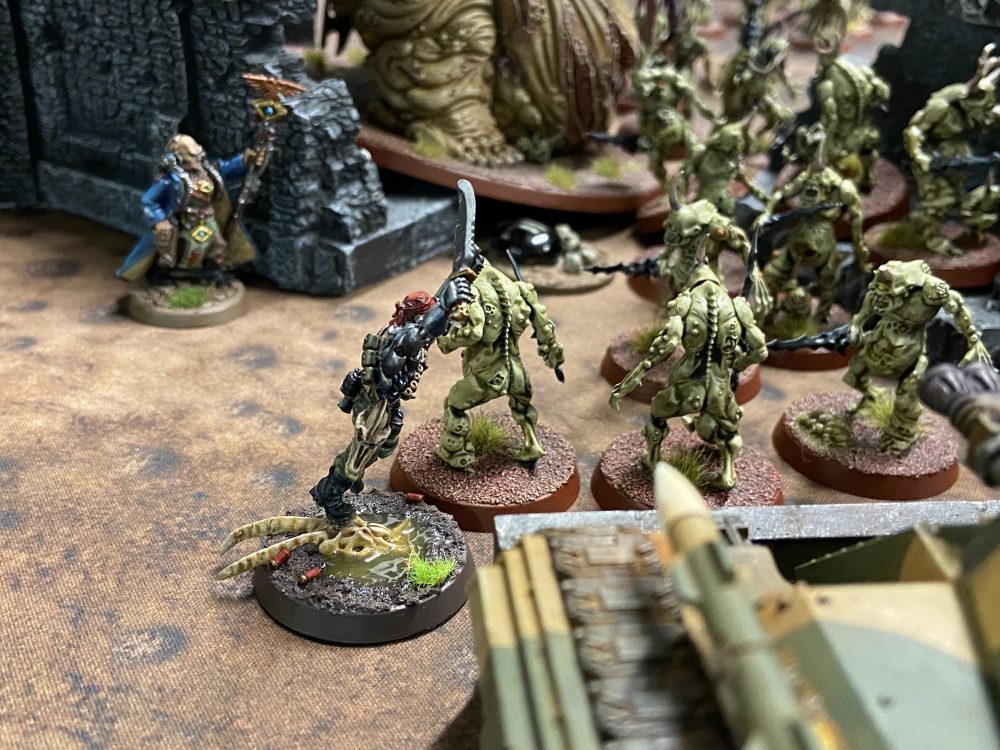 I’d like to throw in a Priest and Yarrick too. The Priest gives everyone an extra attack on the charge and Yarrick lets them re-roll ones.

We do sadly lose Straken here though. He is Catachan so cannot be included in such a detachment.

A ten-man squad (with a Sergeant Chainsword) has 22 attacks on the charge; hitting on 4s, re-rolling ones to hit and 6s produce an additional hit. They’re only at Strength 3 but gain an AP. So even your regular Guardsmen have AP-1. A PowerSword

This won’t take down a Land Raider but it could munch through other chaff, Toughness 3 infantry with ease. 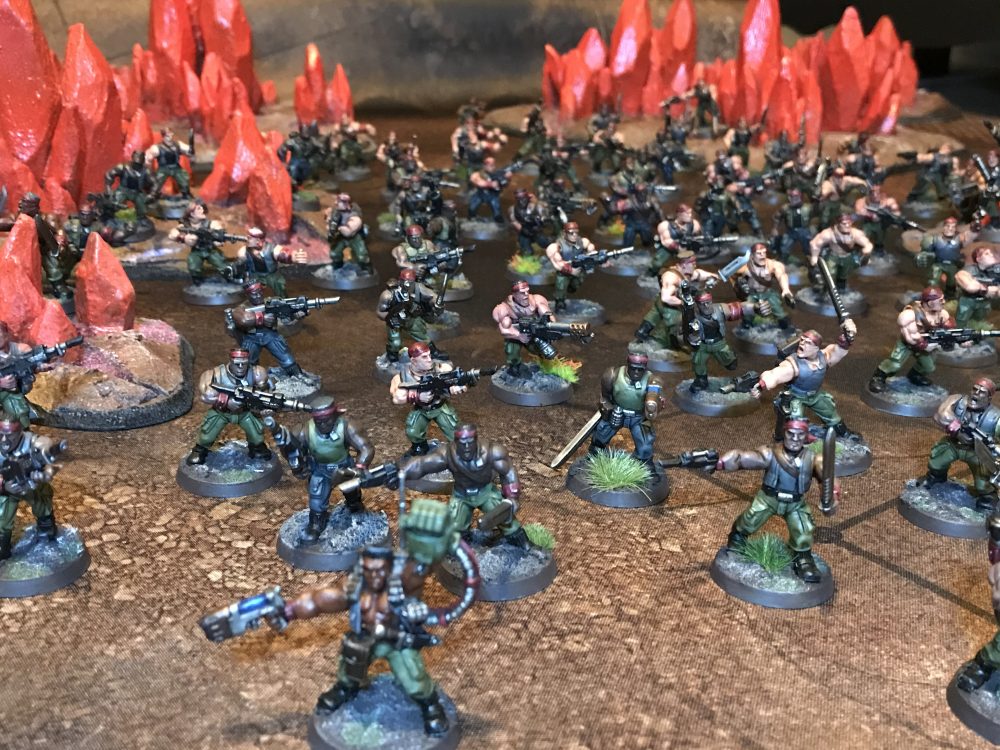 Slum Fighters, the lot of them!