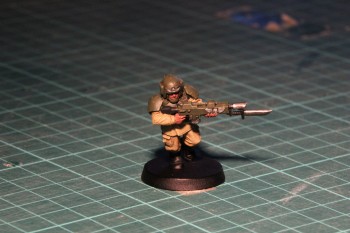 Some how a simple post on Facebook turned into a few people writing a short story each. Something around 500 words was floated about. I didn’t want to let the opportunity of being creative in the 40K universe to pass me by, so here is my short story! And of course its Guard inspired.

‘Serial: #XXY8-MkV, Issued: 1 120 890.M41‘ – it said it all, right there in front of me, less than a foot away. It showed how utterly fucked everything had become on Kreesho. Curse the Emperor. Issued 890.M41, that made the helmet on the Guardsman in front of me 120 years old. Micc had found the last of the Adeptus Administratum’s supplies, some forgotten cache of supplies from centuries past. It was better than nothing.

We stood in that warehouse for 4 hours, all 54 of us, men and boys. 54, that was all that was left of the Imperial Guard on Kreesho. I say Imperial Guard but we really weren’t. My basic training consisted of “Safety off, safety on. There is the trigger. And if you’re face down in the dirt with a Greenskin over you, pull this from your grenade and wait. Make sure you pray while you wait it’ll make the 3 seconds go faster”. That terrifying thought had been swirling in my mind for all these hours. Mind you it was better than the other memories I had from the night before. The women and girls had been executed last night, to save them from the savages that had torn our planet apart.

The old warehouse was just East of the main planetary palace. The palace had fallen last week, along with all the high borns of Kreesho and their guards. We waited for the Orks to find us, thats all we could do. No supplies, no transports, no tanks, no hiding and no help – we were alone waiting for our last stand. Micc had roused  us is all into a frenzy initially, we were ready to fight and die for our Emperor in a blaze of glory. That was 4 hours ago, all the fight had gone from us now.

We first heard their Xeno tongues spitting the strangest of sounds, then their feet and then their clanging equipment as they walked towards the warehouse. The door opened and we froze, no one willing to lead the charge we had all agreed to make once we were found. In walked 5 Gretchin, a scavenging party looking for spare parts or weapons presumably. Everyone raised their rifles and shot uncontrollably at the little green shits. The darkened warehouse turned into a light show, a mini electrical storm as the las fire poured into our foe. “Ceasefire! Ceasefire! Ceasefire!” bellowed Micc.

We crowded around the charred remains of the Gretchin, feeling good about ourselves and chatting lazily as if we’d conquered our enemy completely. Then it started, a loud whirring, the last sound I would ever know. The warehouse was lit up again, not by las fire but by sparks flying up into the ceiling as a large Ork buzz-sawed his way in. This was it. Micc charged forward firing his bolt pistol over and over again. The rest of us stayed still and fired wildly at the Ork as it advanced. It only advanced, it didn’t waver. Micc was gone, nothing but pulp. It only advanced, an unstoppable wall of spinning metal. It wasn’t even trying, the Ork just walked into us as if we weren’t there. There was no point, my legs gave way, I collapsed to my knees, I wept and died just like the rest. A coward.

Pay Where You Play – Pitfalls and Perfection