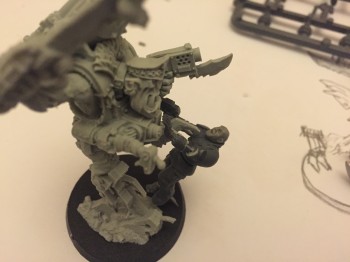 This is the first instalment of the Secret Santa project for ResinJunkie. The model I’ve bought is Ork Warboss Zagstruk. I decided on this guy because he seemed like an interesting chap to paint and because ResinJunkie doesn’t have this HQ, of course. He’s also in a pretty cool stance that has lots of scope for a customised base. More on that soon.

I have the paint list from ResinJunkie to do his trademark orange skin but I guess the rest is up to me. Painting is a long way off as I first need to complete the base. My thoughts on the base were that I wanted a Guardsman under the foot of Zagstruk, someone dying or about to die. 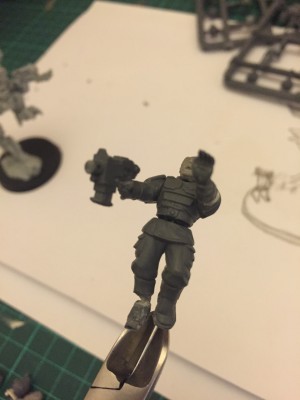 I had to repose a foot and an arm for this, as well as place a bolt pistol on a new arm, I’ve also used a custom head from Maxmini, one with no helmet. I mean, this guy doesn’t stand a chance, a helmet isn’t going to help him now!

The limbs I did with a pin drill and some thin wire. The wire was just what I had around and was too thin really so I needed to use multiple strands to get them to glue into the holes I had drilled. But it’s worked and the limbs have been pinned just fine.

The hardest part was the new foot, I cut the guys toes off then his foot off at the ankle. I then had to drastically cut and file down the foot to make it look correct. It turns out that on the legs I chose to use, that the foot in mid air is much shorter and narrower. When I placed the other foot, which is usually flat on the ground, into this same mid air position it looked wrong. As the foot was too wide. Hence the filing and cutting. The new foot I basically wanted to look outstretched and off baleen.

I wanted an arm and hand up in the air too, a last ditch attempt save this mans life. I had to cut an arm at the elbow and then pin it, green stuff will be used to make up the new elbow which is now outstretched rather than bent. A fiddly part here was the hand, the hand originally was in a cup shape, usually used I think for holding a Lasgun’s main bulk. The hand needed chopping in two at the knuckles, filing and then glueing back into a straighter position so the whole hand appears open in a more defensive stance.

That’s it for this update. I’d love to hear from you about this project! The days are ticking by so expect to see much more soon. Also be sure to go and check out ResinJunkie’s project for me – I’m steering clear of his blog until after Christmas! 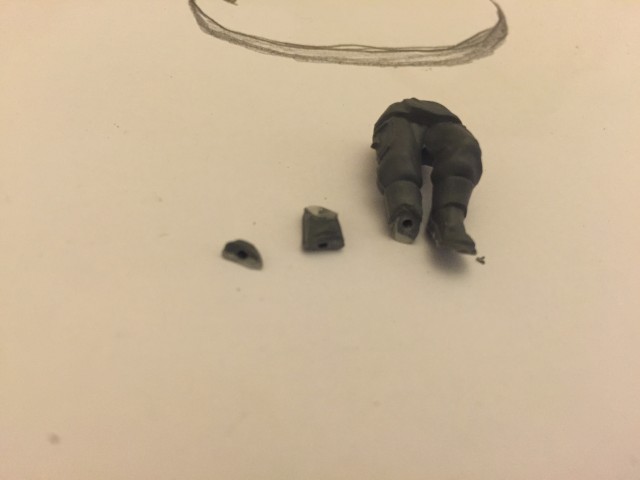 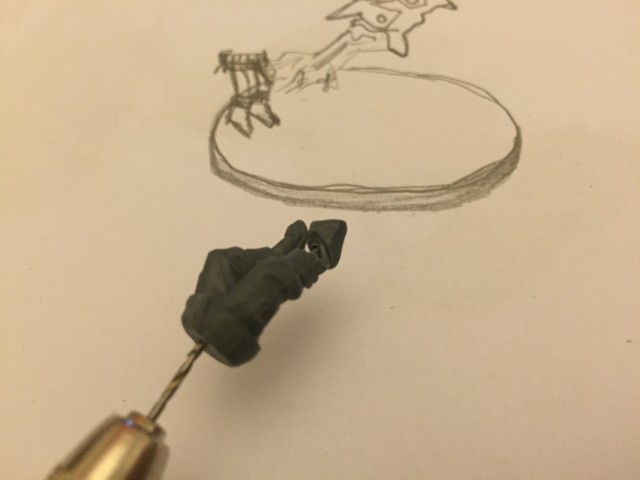 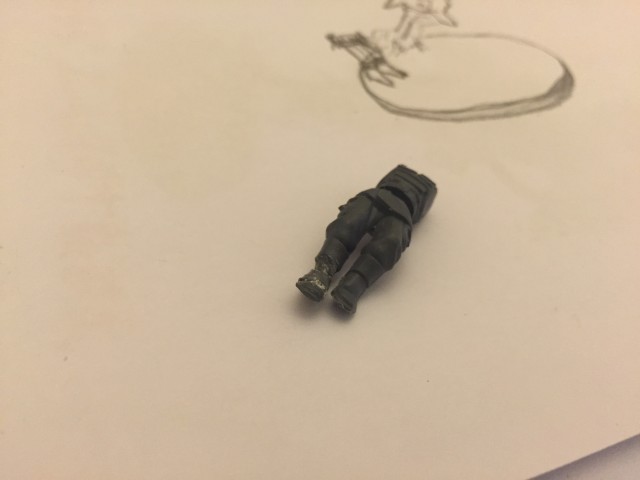 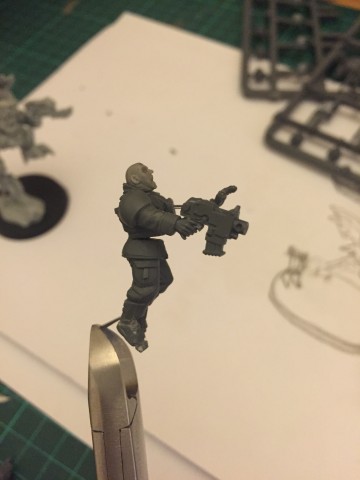 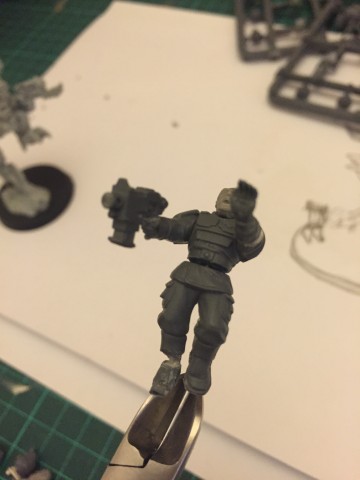 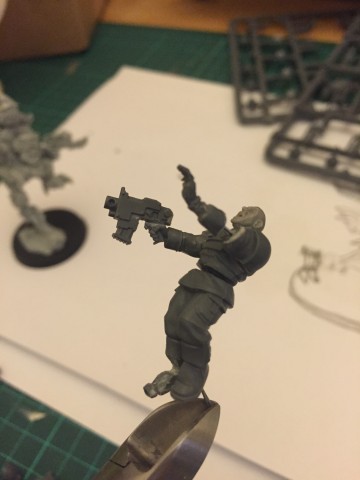 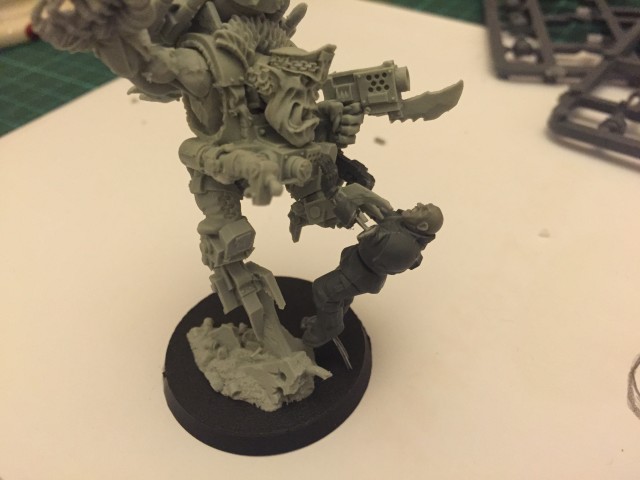 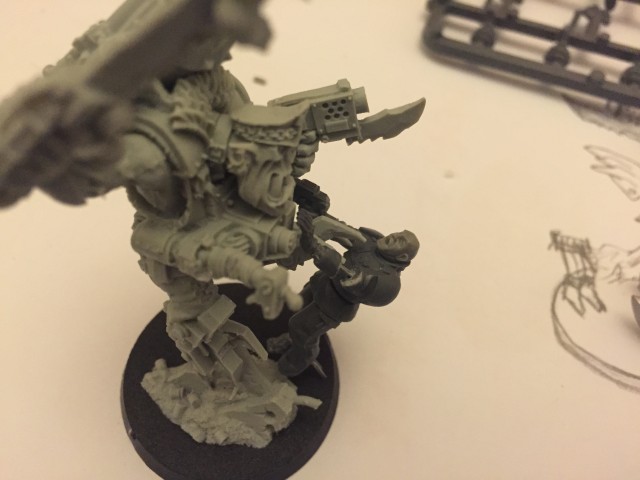 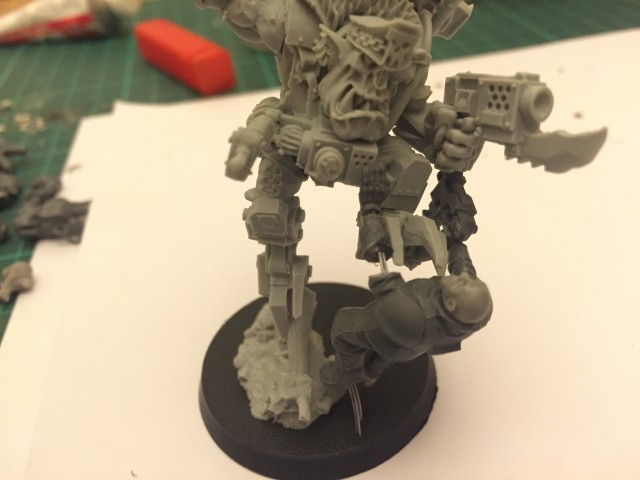