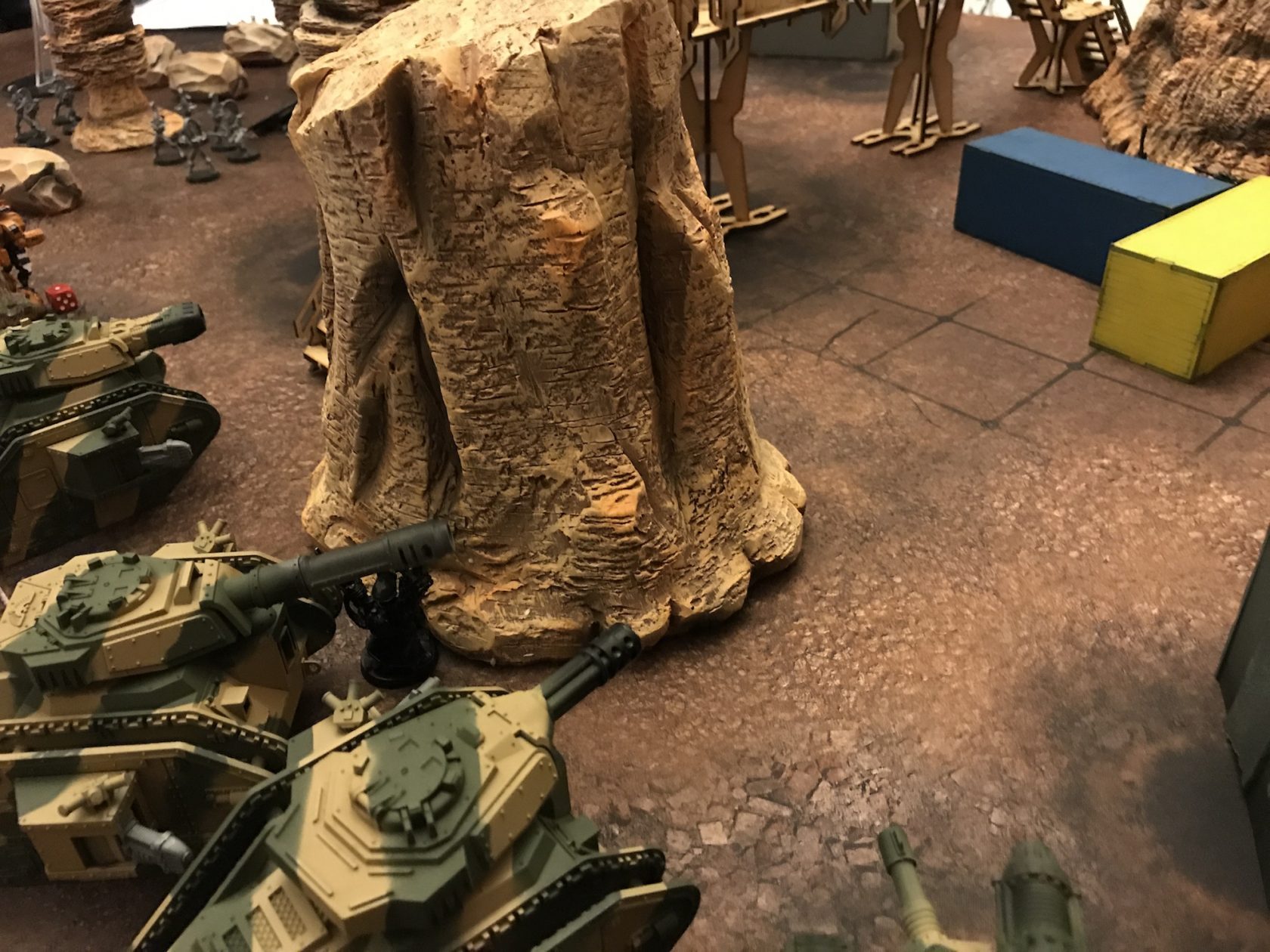 Today I have a write up of a game from Greg, our resident Aeldari (Eldar) player- and now Ynnari player. I did not write this up, for reasons that will become apparent later. The terrain used is from gamemat.eu – its awesome. Review coming soon on it!

It was our usual 2,000 point limit, but this time myself and Tom (usually plays Dark Angels) turned up 100 percent Aeldari. They have not been performing particularly well for me in their normal guise – so this time I went Ynnari. The Tau have also not been performing well for Dave – partly due to them being targeted on turn one, partly due to poor rolling for Dave (either that or they are just awful in 8th). So we will see how it goes for him this time. I know Jake and Dave will have been having secret war councils for the last 2 weeks trying to eek out a win – Greg is totally right here.

As you can see Jake decided to go tank heavy – which left few points from his 1K share to bring much else. And to save time later I can tell you that he chose not to move his tanks for the entirety of the game. Dave too brought his big guns but even still the Aeldari finished setting up first and despite using a CP for a second attempt – Jake failed to steal the initiative.

Jake chose the deployment map, and we insisted on playing objective based mission. This played in our favour due to the lack of infantry brought by the Coalition.

This was our first attempt at playing Ynnari – they absolutely spanked their opposition from Turn 1. The Strength from Death Rule is enormously destructive.

The Ynnari flanked right concentrating fire on the Tau (surprise surprise) choosing to stand back from the cluster of IG tanks. The enormity of firepower on the first unit of Crais Suits lead to their destruction, and the initialization of the first Soul Burst. Which effectively put another volley of shots in to another unit of Tau Crisis Suits. 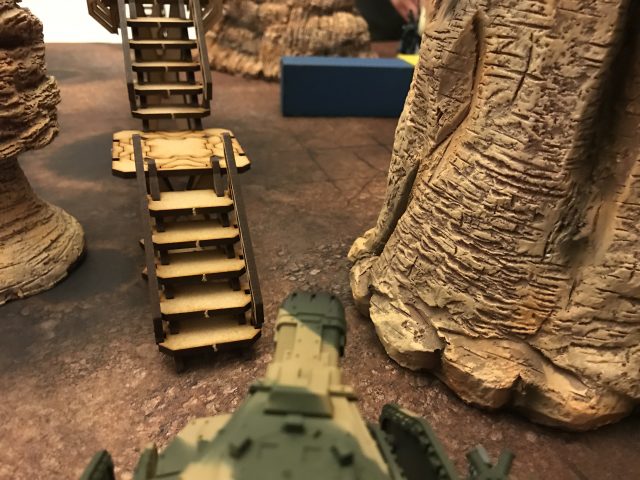 The Tau were left with one unit gone and two units having received a good spanking, withering their stats and taking the sting our of their counter offensive. The Burst Cannon Suits were in Reserve.

The Coalition first turn saw their Reserve forces enter the foray. The Suits came in and  continued to perform in much the same manner as in previous games – which effectively amounts to little. A few wounds were lost here and there. The IG tanks concentrated their fire on an advancing Wriathknight and a unit of dark reapers. Certain guns were nominated to take out the reapers, but the death of the Wraithknight resulted in a Soulburst being granted to the reapers who simply moved out of range of the remaining shots.

The Waveserpeant with its Spirit Stones and Serpent Shield soaked up an awful lot more punishment than a transport should be capable of, and dumped out 10 Fire Dragons right next to the already bloodied Tau. More losses triggered more Soul Bursts and the carnage ensued.

It is difficult to remember who Soul Burst first as it was the beginning of righteous retribution of cascading destruction that never ceased, continuing through the Coaliton turn and on to the point of ridiculousness.

The Coalitions attempts to get themselves back in the game was thwarted by more Soul bursting every time they took out a unit (which wasn’t often) but did lead to more of their units being destroyed and the initiation of another chain reaction of soul bursting during their turn. 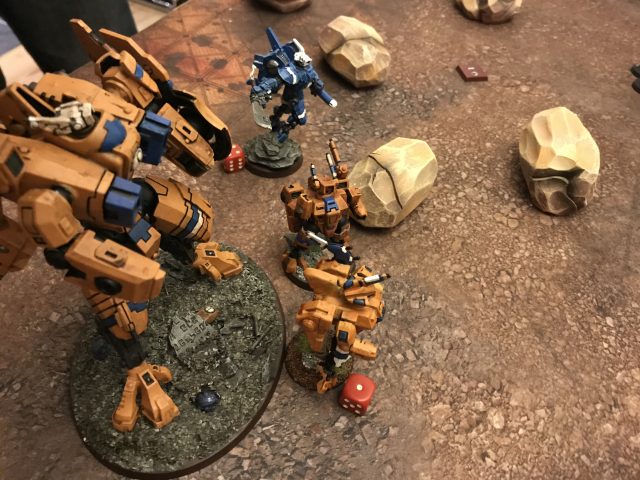 Meanwhile objectives were being snatched up by unopposed infantry, and Warp Spiders pinging around the table. During Ynnari turn 3 there was no Tau left to speak of and by the end of that turn, attention had shifted to the remaining tanks which started to feel the sting.

The dejected look on Jake and Dave’s faces as they sat watching the inevitable and unrelenting fire that rained down upon their army was somewhat satisfying. But mostly there was a realisation that the Strenth from Death Rule is way way WAY too overpowered. Perhaps it would work better with only the death of friendly Ynnari triggering it.

After doing some research – it turns out that in tournament play it is not unknown for Ynnari to struggle to find an opponent willing to play against them. And since the main aim is to have fun, well… what else can you say.

I think I would play them again but as a small faction of a larger Aeldari force, as Aeldari seem to be too soft on their own but too powerful as a full Ynnari force. Particularly since there was no actual Ynnari on the map who could offer “Word of the Phoenix” which can order any unit (not just infantry) to perform a Soul Burst (if they have not already done so this turn).

I know this write up seems one sided – But the objectives achieved was Ynnari 14 and Coaltion 4. So there you have it – play against Ynnari at your peril. You will either be spanked – or find nobody willing to be spanked. 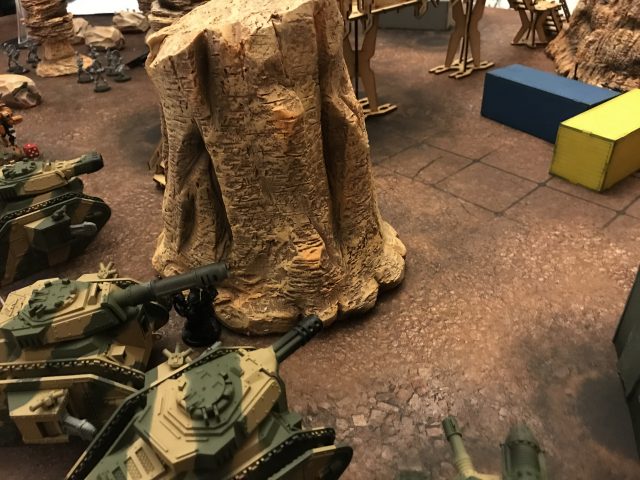 All the Leman Russ couldn’t defeat the Ynnari

Tactics that can be used against the Ynarri is to cripple but not kill units that are within 7” of other units. Go for the infantry first as the destruction of a non infantry unit will trigger Soul Burst, but try to not to kill whole units. If the unit is defeated in the morale phase then there is no Soul Burst given to nearby units. Try to isolate units and give lots of thought to the possibility of Soul Burst chain reactions – by using ranged weapons and keeping your distance by using units with FLY. Thanks for reading my first write up, I hope it was informative.

As you can see the Guard and Tau took a pounding. And like a true Commander of the Guard its been expunged from all my Imperium records – including my brain.

But from what I recall my notable points were: