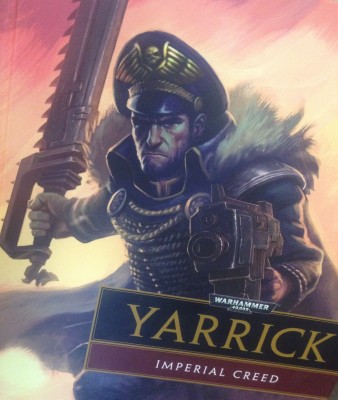 I’ve recently read my first 40K book, Yarrick: Imperial Creed by David Annandale. I’ve a long way to go in terms of 40K reading and this was a great start for me.

The book had a good mixture of action, story and plot twists set across the murky political landscape of Mistral – a planet taken over by heresy, or is it? We see Yarrick battle his way through heretics and corrupt officials to discover the truth on Mistral.

One aspect that becomes apparent in the book about the Imperial Guard is that they can be their own worst enemy. The situations they find themselves are horrid but their strategy of throwing men and force at a problem is not always the best approach. I’ve tried to build this into the formation by weaving in slightly negative special rules to emulate how the Guard’s methods and red tape works against them.

The formation would consist of;

The infantry platoon should be made up as follows;

The novel takes place during Yarrick’s younger years when he is a commissar, yet to fight on Armageddon against the Orks. He is under the tuition of Lord Commissar Rasp a battle hardened veteran, as is Seroff, Yarrick’s friend. Yarrick’s abilities are clear in this tale and show him as rising star among his fellow officers. His love for the Emperor and his ability to get a task done know no bounds.

Emperor Protect! – Yarrick’s young zeal means he exists to serve the Emperor. The Emperor is his primary concern, even on distant worlds where all others seem to have lost their way – Yarrick always thinks of his God-Emperor. While holding an objective Yarrick’s unit have the Counter-Attack special rule.

Saultern is a sergeant in command of a regular squad of troopers, his superior is Yarrick, Yarrick watches Saultern’s every move as well as the commands he issues like a preying mantis ready to pounce. Yarrick spares Saultern from execution early in the book and this plays on his mind. He’s always got an eye Saultern waiting for him to make a mistake.

Charrrgge! – The constant gaze of Yarrick upon Saultern forces him to confront his fears of battle and presses him forwards into places he would really rather not be. When charging the combined squad may charge up to 3D6″ instead of the usual 2D6″. This effect is not cumulative with other charge distance modifiers. If Saultern dies and is removed from play the squad must charge its usual distance of 2D6″.

Rasp takes Yarrick under his wing and is slowly teaching him the ways of battle and of the galaxy. Rasp is trying to make the young commissar see that war is not only fought on the battlefield but also by political figures and the murky waters they tread. His sly nods and hand gestures show Yarrick when he is needed and when he is not within the games played by Mistral’s officials. After meeting an old and trusted squad mate Rasp is captured due to his eagerness to help his old friend.

On Me Men! – Rasp my never leave the unit he starts with voluntarily. If he’s forced out of unit cohesion then he must move and regroup with the unit in the next movement phase.

Hello Old Friend – Rasp’s eagerness to help his old squad mate and trusted long term friend got the better of him. If any enemy HQ unit from one of the factions below comes within 6″ of Rasp roll a D6 – on a roll of 1 or 2 Rasp is captured and is removed as a casualty. This test can only be taken once per game.

During the first engagement Betzner takes down a large Chaos walker. This was a great feat but not without it’s downfall. During the firefight Betzner is “touched” mentally by the creature.

I Can See Clearly Now! – Betzner’s new found abilities are somewhat random, just like the Warp. Roll for Betzner’s shooting attacks separately from the other missile launcher teams. Before rolling to hit roll a D6 and consult the below table;

Your comments and feedback are always very welcome!

Why not a review

I am not an avid reader. I have read a handful of business books, a few Iraq and Afghanistan books, many Bernard Cornwell novels as well as a few classics such as Catcher in the Rye, Life of Pi, 1984, Brave New World and Catch 22. This I don’t see as a great repertoire for a 30 year old. My original thought was to write a book review but I don’t think I’m qualified to do that!

Blog Roll – do you want a link to your blog?

A guide to hobby & social media – Posting on Twitter (Part 3)