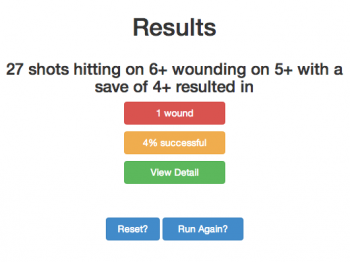 David who I play my Warhammer 40K games with had a theory; that a computer would speed up our games if it did our dice rolls for us. Our game seem to take ages. I think this is mainly due to interruptions, fluff chat and general indecisiveness. I’m not convinced his theory is correct though.

The idea was that by getting a computer to take an input and then simply output the number of wounds would be faster than rolling dice. The problem I had with it is that you still need to calculate the number of valid shots, wound rolls and save rolls. We know the formulas off by heart so there’s no delay there. It is also difficult to account for so many variants within 40k; such as different models in different types of cover. A computer won’t know about these special circumstances unless you tell it. And if you’re telling it then you may as well do it yourself, it’s just an additional buffer to getting the final output.

The other main issue is that rolling dice is fun. That sounds weird to most none gamers I’m sure, but it is fun. It adds suspense and a random delay between not knowing the outcome and knowing it.

So I built it to try it out during our next game on July 15th.

You can try it out here.