Titanicus, What Reading A Book Told Me About Tabletop 40K 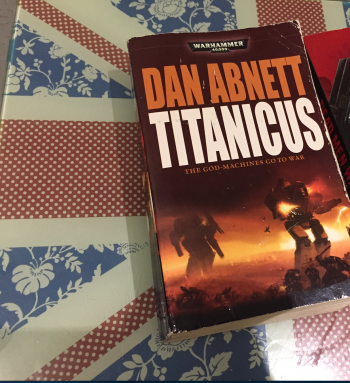 At the time of writing I am just over half way through Titanicus by Dan Abnett. I am enjoying the book; it’s well written, it makes sense, the characters are believable and the action is intense and well described.

It’s my first book by Dan and I expected nothing less. I’m really looking forward to reading more of his stuff not only because I’m enjoying this book but also because hes spoken so highly of by so many people.

So that’s the book so far. How does this link to the table top? For starters I don’t own a Titan or even a Knight. I’ve never fought against a Knight nor played a full on Apocolypse game so I am some what out of my depth here perhaps. The idea of a Knight is really interesting for me, one day I will certainly own one. It’ll be magnetised so I can set it up how ever I want, but it’ll only ever be one.

I’ve never really got the idea of Apocolypse games or Titans. Scaling everything up doesn’t really make sense to me. Sure you can kill multiple models all at the same time or fell the enemy super heavies quicker if you bring your own super heavies but where does it end. The release of the new £1,200 Warhound suggests that it won’t end.

Back To The Titanicus Book

The release of this new Warhound and me reading this book are just a coincidence. But I feel the book has taught me one important lesson about Titans in novels and also Titans and possibly all larger models on the table top.

The political plot line and the troops trapped on the frontline with no communication and little weaponry are really good. The characters feel real and I’m concerned for them and the people they’ve left behind in the Hive.

The Titans are commanded by a team of five; a priceps, a moderati, a tech-priest, a steersman and an enginseer. Plus two servitors for reloading and maintaining the weaponry. But I’ve never felt connected or concerned about a Titan or its crew. They’re all just part of a huge machine which is incapable of experiencing the dirty violence of the real war. And so I’m disconnected from them as characters.

Also by coincidence Mini Wargaming recently put up a battle report of four Knights Vs The Sisters of Battle + a single Knight. And this was boring too. Knights shoot, Sisters die, Sisters shoot remove one hull point, Knights move and kill more Sisters. Rinse and repeat. It’s just boring. The scaling up of the battles doesn’t seem to add anything at all to a game other than the monetary cost. It just takes away any sense of character or connection you may have with the models on the table top.

I think I had a biased view on this subject anyway, after not playing for 10 years or so 40K looks very different these days, from what I can remember from the past anyway. But this sort of reinforces it for me. The larger models are not people, they have no feeling, emotion or fluff. They just put down pie plates and take the hurt.

I look forward to the day The Omnissiah blesses me with a Knight, but I’ll kindly reject any other offerings from the the Machine God.