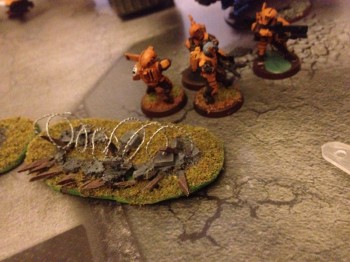 I am sitting out the next game for my little group of gamers, there are 5 of us now and so its getting a little manic around the table. So I have taken it upon myself to write them a mission. One of guys have the Shield of Baal box set and another the Dark Vengeance box set. They’re keen to use the Tyranid models and the Chaos Space Marine models so I have written a little mission for them to do this while taking on the worst of the xenos, the Tau Empire. The Imperium is not making an appearance in this game so it will truly be a battle of the heretics.

The forces of the Imperium lay broken, burned and scattered across the landscape, their last stand on the planet of Avoll was a long and hard fight spanning a decade. Commander Astag surveyed the data feeds from numerous Dreadnoughts, Guardsmen, Battle Tanks and Space Marines alike – but nothing was helping him piece together the mess that lay 20,000 miles behind him. His ship was making its way into the Warp to escape that cursed planet. The Tyranid forces had doubled their efforts in the last couple of months, satellite data showed whole lakes on Avoll turned into birthing pools for the grotesque creatures. Their ability to process the Biomass on Avoll more efficiently and continue to swell their ranks was outstanding, never had Astag seen such a relentless growth in Tyranid numbers in such a short space of time.

It was late, Astag had stopped watching the data feeds, they still played but he wasn’t concentrating any more. He looked up before switching the dataslate off, the feed was of Guardsman #1465534 P.B. Anderson; Age 16. The poor bastard’s last vision was a Genestealer’s claws opening up his helmet like it was a piece of fruit. The feed faded to red and then black as the tiny camera fell from Anderson’s helmet. Then Astag saw it, the eight points, a scar, a tattoo, some kind of marking, on the underside of the Genestealer’s neck through the gore of Anderson’s blood. A Chaos mark. He rewound the grainy footage, paused it, rewound it again. It was there, Chaos had come to the Tyranid swarm on Avoll. No mortal servant of the Emperor could be asked to defeat such a horror of the Grim Dark. Avoll would be Exterminatus, he was sure of it.

The battle will take place on Avoll, a ruined wasteland after  decade long war between the Tyranid’s and Mankind. The Tyanids won after some intervention from Chaos, the exact mechanics of what happened are unknown to the Imperium. Needless to say elements of the Tyranid forces were influenced by Chaos and have somehow served a Chaos God.

The mission takes place two years after the war has ended between Mankind and the Tyranids. The two forces of ultimate evil in the 40K universe are still working together. Meanwhile the Tau have picked up a faint Imperium locator beacon in a remote area of Avoll, away from the old hive cities in a small town. They hope to drop in, collect the artefact and leave. However the Chaos forces are aware of the Tau’s presence and are hoping to intercept their landing party and discover the source of the beacon for themselves. As for the exact purpose of the beacon no one knows, but X marks The Spot.

Both forces are racing towards the primary objective with their respective recon parties, who ever gets there first will be randomly decided. Roll a D6; on a 1, 2 or 3 the Tau arrive first. 4, 5 or 6 the Chaos forces arrive first.

The faction that arrives first will from now on be known as The Defenders. The defenders will deploy first and will take the first turn unless the enemy can Seize the Initiative. The defenders must deploy all their Fast Attack units at the start of the game. Everything else is placed in reserve and arrives as normal in turns 2, 3 or 4. These faster units have discovered the beacon and are digging in to defend it until they can be reinforced. The Fast Attack units can only be placed within 12” of the primary objective – they are all alone. Finally these initial Fast Attack units deployed at the start of the game by the defenders gain the Stealth special rule (+1 to cover save) until the end of the first game turn.

The other faction from now on will be known as The Attackers. The attackers deploy as normal inside their deployment zone as determined by the deployment map selected earlier, but no attackers unit can deploy within 12” of a defenders unit. They are somewhat cautious as to what forces the enemy already has in place. Finally the defenders must select 3 different units to keep in reserve, these can be any units and represent their forces being spread out as they race across the battlefield to reach the beacon.

The three units held in reserve are important for the attackers. Bringing in the big guns to flush out the enemy from the objective may seem smart, but that may mean leaving your scoring troops in reserve. If they arrive late on in the game you may struggle to capture the objective from an already dug in opponent.

Eldar Craftworlds and Necrons – My Thoughts