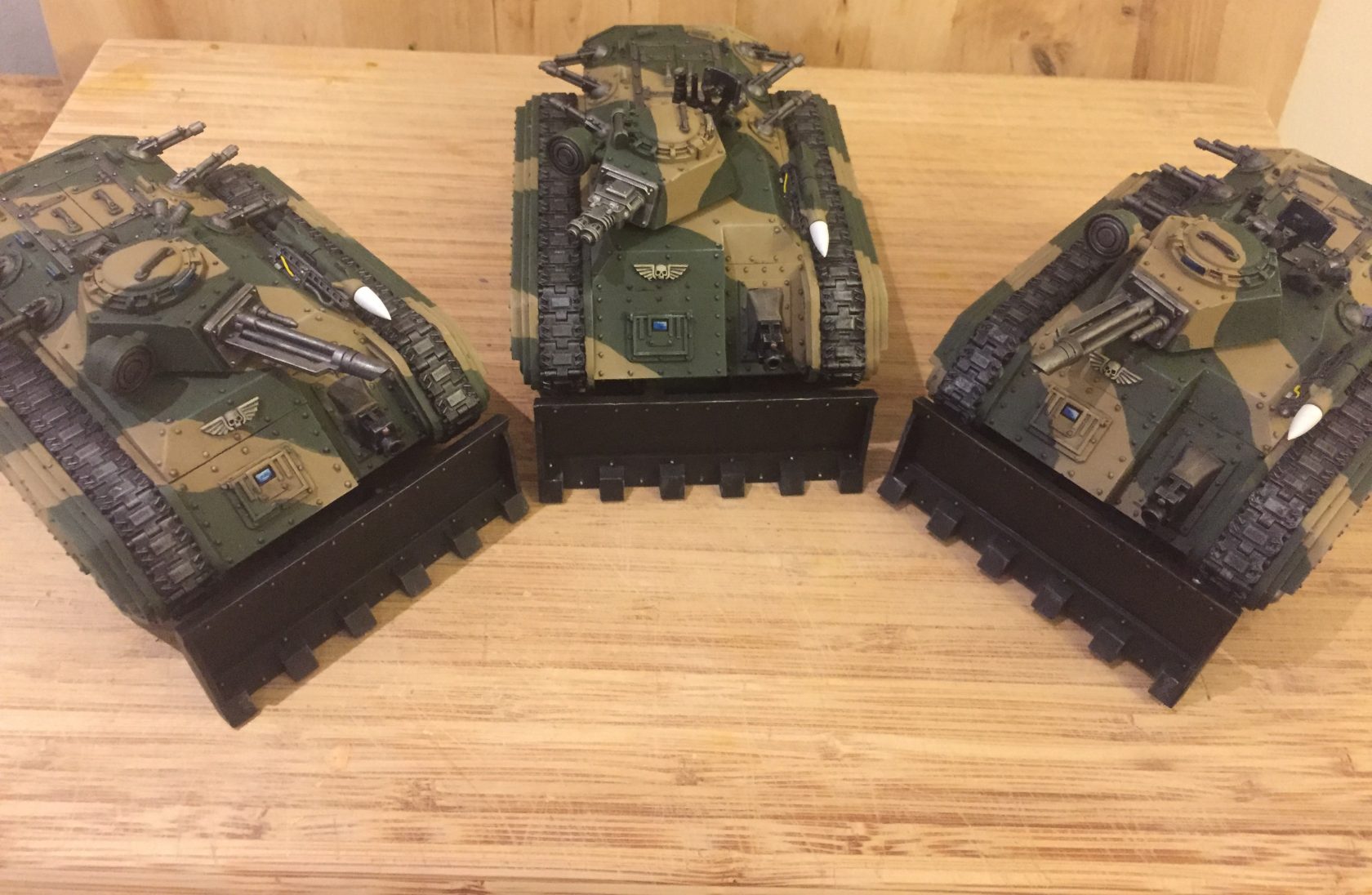 Random rolls and funny occurrences from games involving my Astra Militarum will be logged here.

This page will document in date order (most recent at the top) the various odd, random and notable events that take place during my game. It shall be called Tales from a Guardsmen. They are not long enough for a blog post each and so I thought a page dedicated to them would be much better.

Got your own story? Add a comment I would love to hear from you guys!

It is the very start of turn one, my opponent is taking his first turn. This involved rolling up three Land Raiders towards my massive gun line as well as at least two Librarians. I have a ten man Guardsmen squad with a Vox-Caster in a building in the centre of my deployment zone. They had been planned to be part of a large Melee Guardsmen Blob but I didn’t blob them in the end and instead kept them separate. They were up high in a four story building, ruins, in cover watching over the battlefield.

Their purpose was to give Twin-Linked to the Emperor’s Wrath Artillery Formation. This would give my Manticore Twin-Linked and my two Basilisks Twin-Linked. Pretty handy right?

Welcome to The first Psychic phase and my enemy gets Psychic Shriek off against my Vox-Caster unit. I roll three sixes and the unit disappears with no saves allowed at all. This was hellish bad planning on my part for taking just one Vox-Caster but it was also hellish unlucky. All that Twin-Linked goodness is now gone and they are back to being the standard pattern crap Basilisk. I think they killed eight Tactical Marines the whole game and may took a HP from a Land Raider. 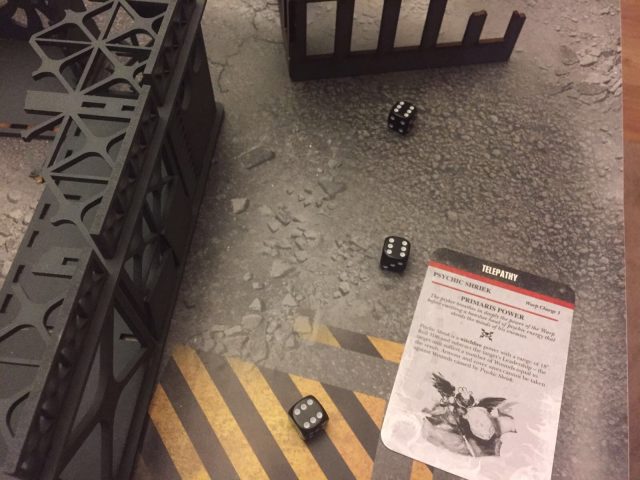 The worst roll for Psychic Shriek

This was during the same game as the Psychic Shriek madness.

We are fairly (very) forgiving of rule calls in our games. Forget to call Jink or Go to Ground at the right time? No problem, just call it when you remember. Its mainly to forgive people when forgetting rather than used to cheat your way out of something.

So he picks up the dice and bam. Double six. Two Lascannon hits on my Vulture. JINK! JINK! JINK! He lets me Jink and I save both a penetrating hit and glancing hit. A similar thing happened later on too in the same game with his Jinking bikes….

Same game again and another late Jink call – you know because we are kind and we forget.

I targeted the Shadowsword’s D Cannon at his squad of 7 Dark Angel Bikes pictured below. They were deployed differently earlier. But I got a HIT and got all 7 under the template. JINK! JINK! JINK! I let him have it.

What I did not know is that these guys re-roll their Jink saves and from the D zero wounds are taken and zero Bikes die. I roll no sixes for my D rolls. 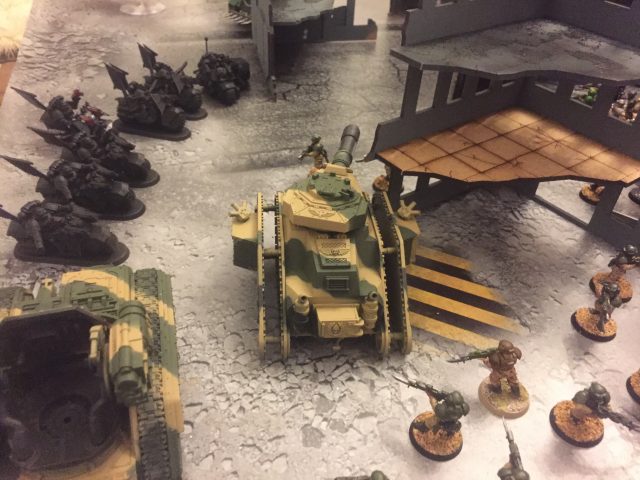 We were using the Empyric Storm cards in this game and one card made Psychic Powers happen twice if the first one was successful. No new Psychic Test was needed for the second activation of the power.

I had a 50 man blob with two Priests, Yarrick and a Primaris Psyker that was Invisible (enemy’s are hitting them on sixes on shooting and melee) and had Forewarning (4+ invulnerable). And because each one happened again I also gave Creed’s Company Command Squad the same powers.

The following turn a Helldrake arrived and could not fire at either Creed or the blob. It has templates which cannot Snap Shoot and if you are Invisible all shots against you are Snap Shots. Plus the blob was charged on the next turn by multiple Chaos Bikes, Chaos Spawn and a Bloodthirster. They went on to kill them all over the course of the game but I think the double powers helped a lot in that first round. 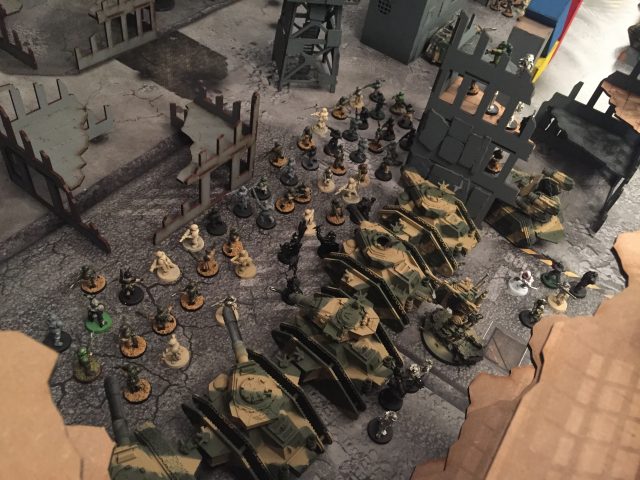 Can you see this invisible Guardsmen Blob?

Our first entry, which is listed last. Anyway.

Above we have the story of the massive blob against multiple Chaos units. A turn into that huge combat the Bloodthirster has lost a wound, Yarrick has lost a wound and the Chaos Spawn (five of them) have all lost a wound. And then the card pictured below comes up. RESET!

Everyone who has lost at least one wound regains a single wound. So the combat for that blob probably lasted a whole turn longer because of this one single card at that time. If it had come a turn later it would have been less bothering because the Spawn would be dead. But it came at the worst time for me. My opponent was rather jolly about it though! 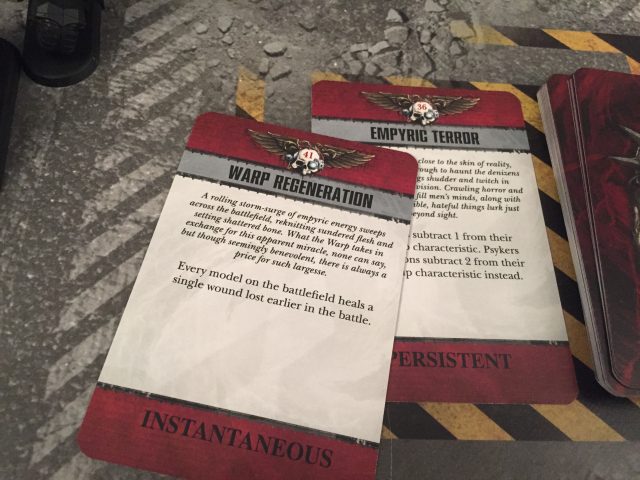