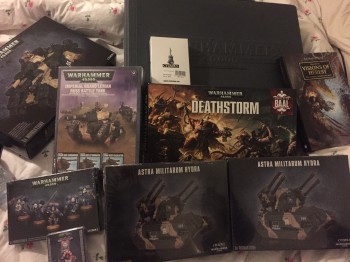 With Christmas gone, 2014 gone and my 30th birthday fast approaching its time to start looking forward to the future and what 2015 has in store for me and 40K. The answer – new armies galore!

The image accompanying this article is testament to the insane generosity shown by my family and friends to my 40K hobby. The important and game changing items are; 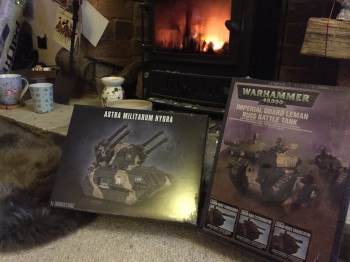 The latter three are of course excellent additions to my ever growing Imperial Guard force. I want to magnetise the Wyverns/Hydras as I am sure both variants will come in useful. I’d like to say the same for the Russ and the Baneblade, although I expect they both will be an entirely different experience for magnetising. Check out this Octoblade for an idea of my grand plans!

My primary Tau opponent got a flyer for Christmas so its a good job I have two Hydras to through at him now! Boom boom boom boom – pop. I also bought another Russ just before Christmas which now takes me up to a total of three, but only one is built at the moment. Massive decisions there on their configuration!

The Death Company squad and Veteran Vanguards is where things get interesting. I’d requested that my Secret Mini be a Space Marine HQ, when asked “which chapter?” I’d decided on Raven Guard. Their sneaky tactics drew me in and I think compliment an Imperial Guard army. They are able to scout and their jump troops can jump/move 2D6″ in the assault phase, just like the Tau can.

This isn’t what the Guard do, it’s the complete opposite so would make a nice allied detachment to bring alongside my Imperial force. I see them as a unit to get up into the enemy’s face and make a mess while the primary detachment shoot from range. The Raven Guard are my distraction and nuisance force.

I know ResinJunkie has also put together a suggested list too to use alongside my new Raven Guard HQ. This we’ve discussed before I have my HQ as it effects my future purchases and painting projects. I believe the list consists of;

So that is the plan for my main Space Marine force. A fast, in your face detachment that can help out my Guard army in sticky situations. Yes, I realise its after Christmas and that my Secret Santa mini is not here, but the holiday got in the way for the both of us so we have postponed. 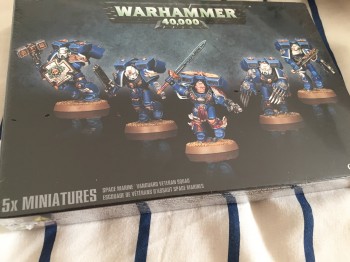 Onto the Blood Angels that came with the Baal box set. These will be a completely separate force from my Raven Guard and will be painted up as Flesh Tearers rather than Blood Angels. This was a suggestion again by ResinJunkie, and it was a great suggestion. This allows me to use them as Blood Angels but without the usual paint job. Personally I think the Flesh Tearer’s paint job is much more badass than the regular Blood Angel look.

So now I have small Raven Guard force as allies to my Guard and a Flesh Tearers army taking shape that will grow over time but isn’t going to be my primary focus for a while yet.

So far I only have the models that come with the Baal box set. This army is something I always wanted to use as they’re so different from my regular Guard force. It’s a massive change and a challenge – something I am really looking forward to.

But this army is on the back burner for the time being as I have plenty to be getting on with. I will of course build and paint these models to play the Baal campaign but expanding the force won’t come for a while yet.

I am really exicited about these new forces and cannot wait to get stuck in. I just need to find the time to get my Christmas Secret Santa completed and some more Guard done. Then onto new projects!